It doesn’t happen every year that Christmas Eve falls on Thursday. The last time it happened was in 2015 and over the last few years, I found myself thinking which watch would I choose for a Christmas Eve #TBT. Since I recently and quite unexpectedly landed an Alpina 943 Chronograph, my choice this year was clear.

Why? It is as beautiful and fragile as a Christmas ornament. I have to say, I am quite careful when handling and wearing my vintage watches, but I pretty much wear all of them with no remorse or concern that they will become more “used“, damaged or even broken. The Alpina 943 however is by far the most fragile watch I have. I remember when I unboxed it and tapped the crystal for the first time. The knock it gave sounded like I just acquired a watch with the thinnest Plexi in the world. For the first time in my watch collecting life, I had the feeling that the slightest breeze leaning on the Plexi might crack it. Seriously. 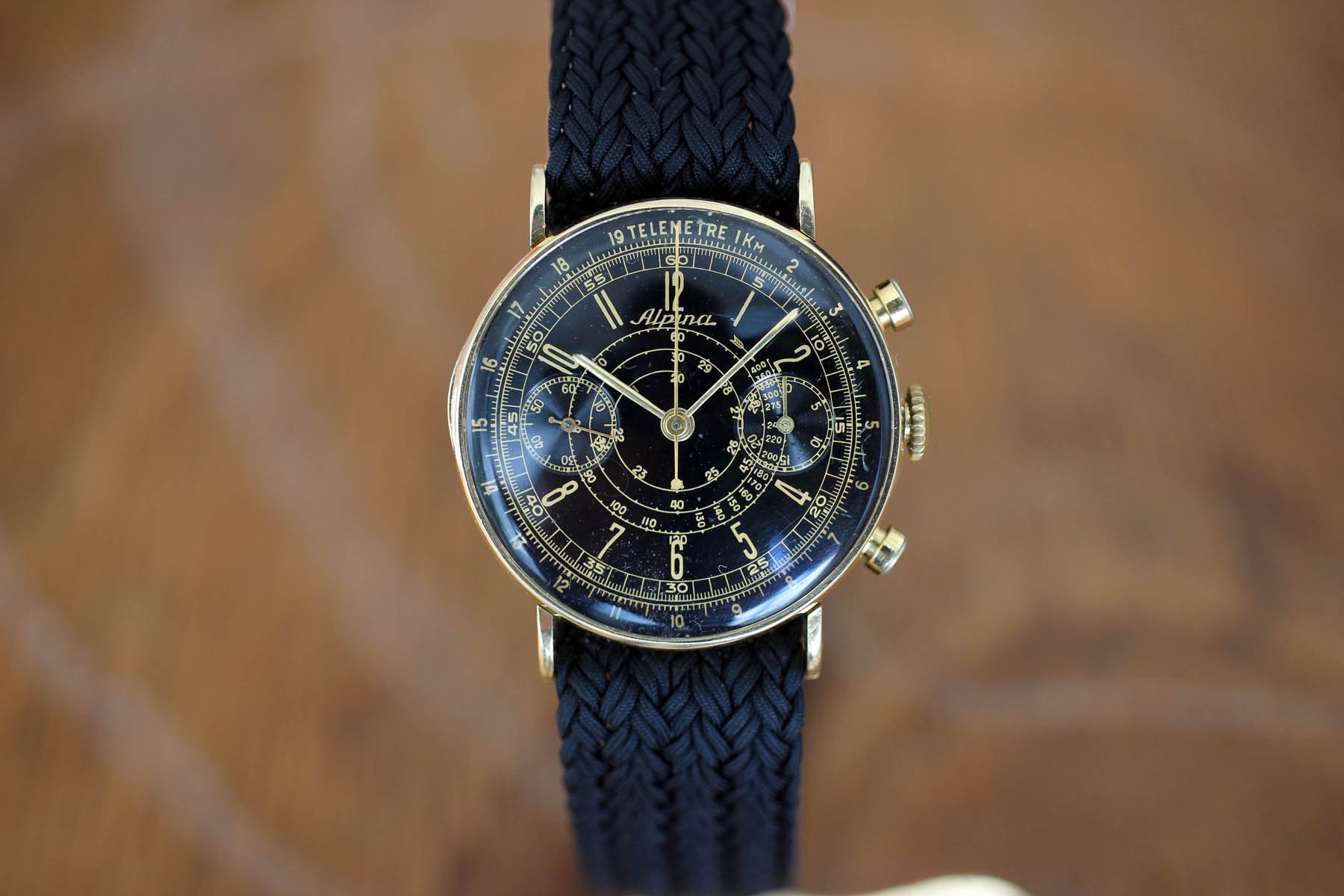 As proven by the stamp on the inner side of the case back, this Alpina is made of 14k gold and that’s pretty amazing. It’s one of the watches that doesn’t need a third color or another material to make it interesting or perfectly legible. You won’t find any white or steel details just as you won’t find any radium lume here. In this context, the Alpina 943 is really different from most aviation pieces with wider radium hands from that era. If any Alpina 943 resurfaces, it’s usually with a very consumed white dial and lume hands.

While numbers are usually directed downwards, in the case of the Alpina 943 gravity doesn’t apply.

The gold frame and lugs are so thin that they don’t steal much attention. You barely sense them and their proportions in relation to the dial width give the impression of a big diameter watch. Interestingly enough, the opposite is true and the Alpina 943 is only 33mm wide. At the same time, it’s that elegant and minimalistic casing that allows the high-born dial stand out.

It’s quite busy judging the diameter and counting the elements on it, but all are perfectly aligned. The Arabic numerals instead of hour indexes are top of the class. While numbers are usually directed downwards, in the case of the Alpina 943 gravity doesn’t apply. All the long and perfectly sleek numbers are oriented into the center like they were trying to point at something. What might that be? 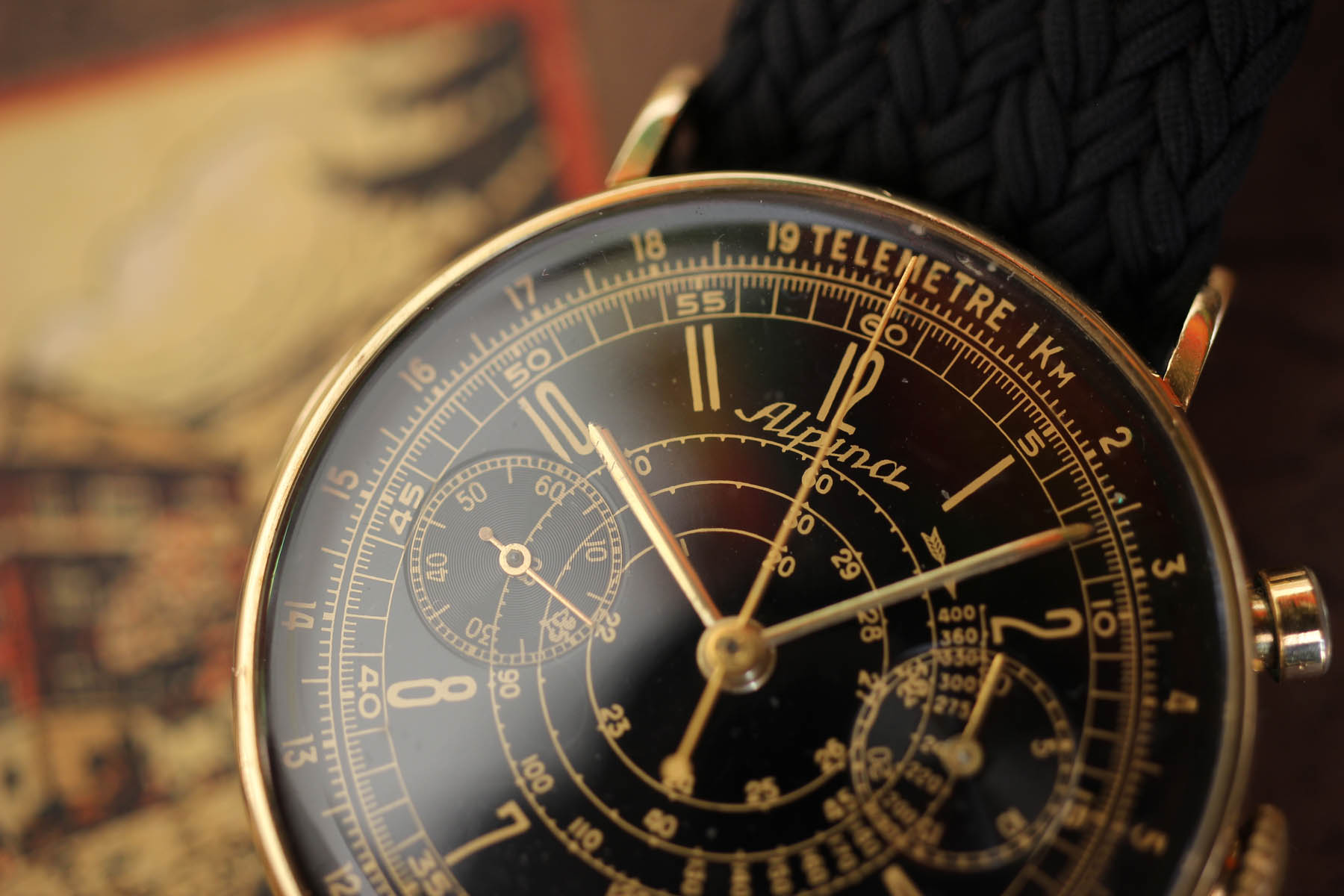 If there is any design trait that is vintage to the bone, that would be the curved line around the center that’s none other than a tachymeter scale. The so-called “snailed tachymeter“, “spiraling tachymeter”, or “circling scale” works like a fixed tachymeter scale, but offers a wider range of speeds because it is usable for multiple rotations of the second hand. A snail spiral allows the wearer to time objects moving slower than 60km per hour. There is also a telemeter around the outside of the dial.

As the hype around vintage watches grows, you can notice that a gilt quality dial has usually been assigned to watches too freely and inattentively. I don’t know if it‘s just a lack of knowledge or character. Many sellers or owners call any black dial whose printing is made in gold-tone color a gilt dial. 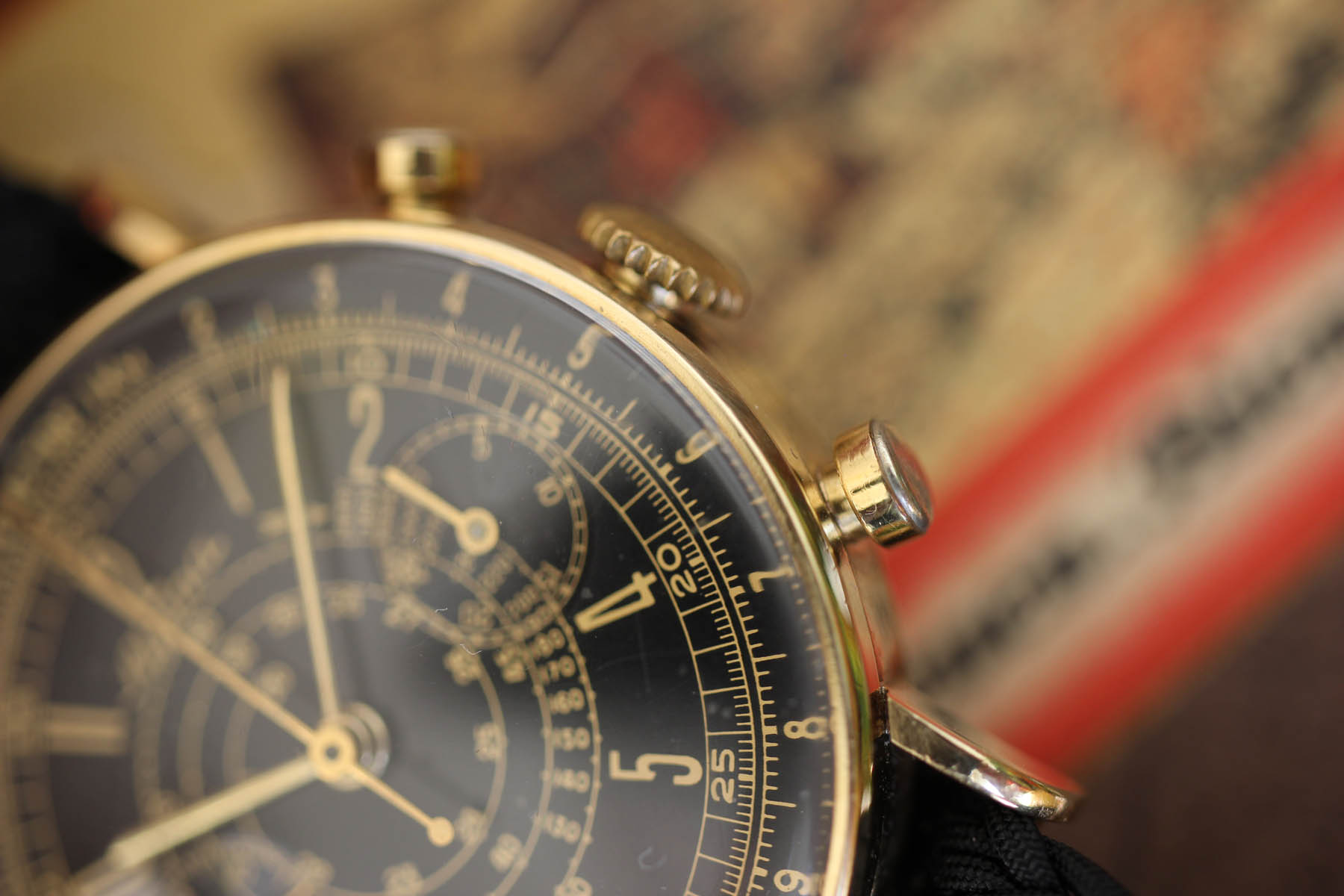 I was not sure what I was buying with the Alpina 943, as I couldn‘t inspect the dial closely with a magnifying glass before I paid for it. To my greatest pleasure, I found the “true“ gilt dial that is manufactured in an elaborate process requiring the finest quality.

Only the highest precision can expose the underlying metal in negative relief as you can see here. To put it simply, the gold-colored numbers and tracks you see on the Alpina 943 dial are not printed above the black color. It’s the precise application of black that exposes untouched metal and thus shapes the dial elements.

I have a lot of vintage watches and the highest ratio of representation amongst them undoubtedly belongs to Alpina. If there was one Alpina watch I was missing in particular, it was this black pilot’s Alpina 943 watch. It inspired the heritage model released for the brand’s 130th Anniversary in 2013. If you asked me how realistically I saw the possibility of landing one in the next decade, I would have smiled and shrugged. Alpina 943 chronographs are scarce goods and I knew that. Very seldomly do they pop up, often in bad condition and almost never with a fascinating black/gold attire. I still can‘t believe that while I will be sipping sour cabbage soup at today’s Christmas Eve dinner, the pristine Alpina 943 will be on my wrist. 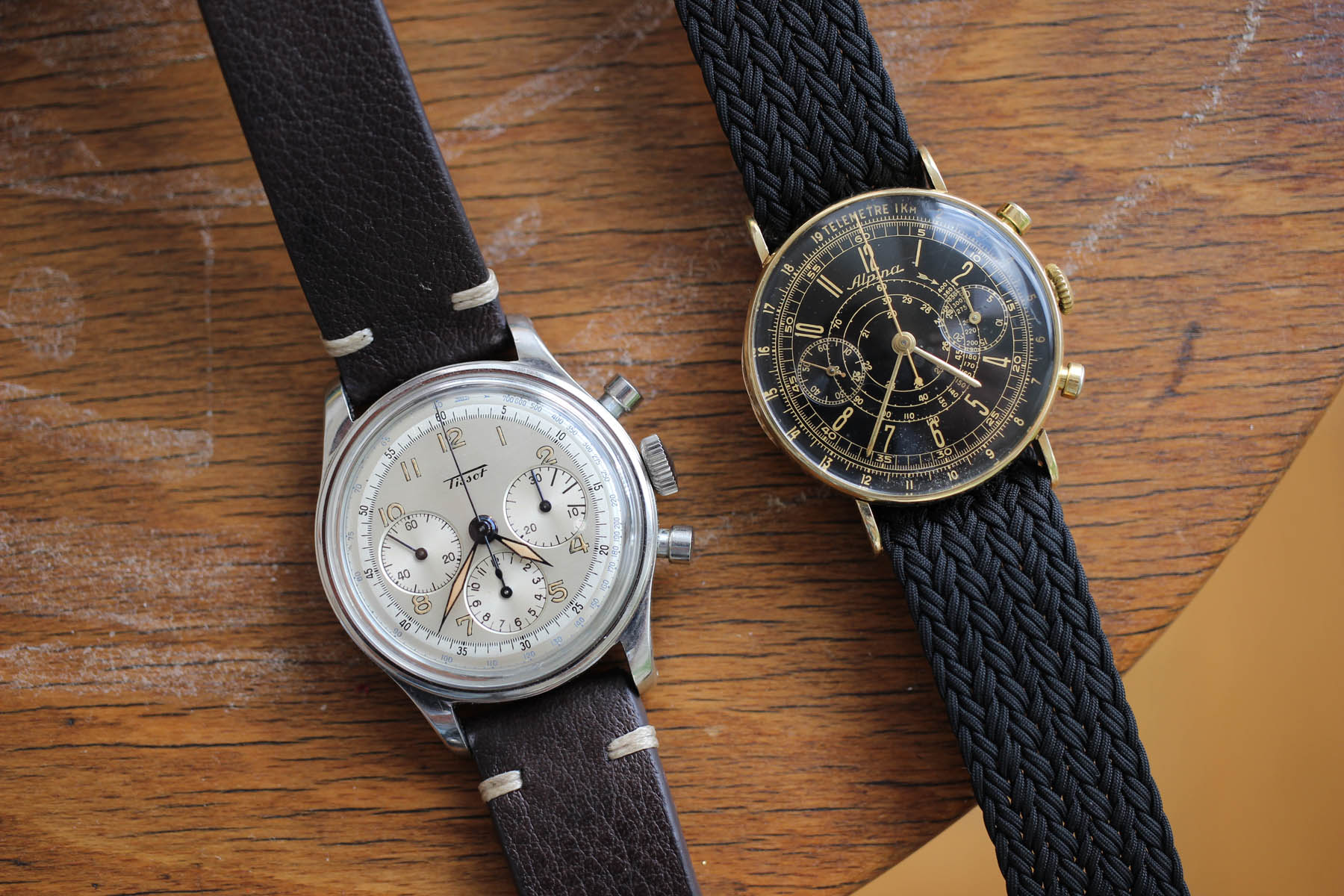 Not searching for the Alpina 943

All my auction robots are set to notify me if any Alpina watch appears. Just one Alpina 943 watch has come up for sale in the last two years. I remember seeing another one listed on Instagram by a Swiss vintage watch dealer. The first one had too much of a damaged dial; the second seemed like a Frankenstein watch. I gave up on any active search. I just waited with little to no hope.

One evening I got an email from a Swedish guy that had come into possession of a Vulcain Cricket watch. He googled more about it and eventually found my article about vintage Crickets, so he decided to drop me a message. When I learned that he wanted to sell it, I asked for more pictures.

You can only imagine how surprised I was when I spotted an Alpina 943 and Tissot 6216 laying next to it. I asked if the other two are for sale too. After two weeks we made a deal and I bought all three watches. Thankfully, each one needed some attention and care by my watchmaker. I say thankfully indeed, despite the fat service fee. The reason is simple. If the watches wouldn’t have had broken mainsprings, stems, or pinions, they would not have been sitting in a drawer in such a lovely condition for decades. 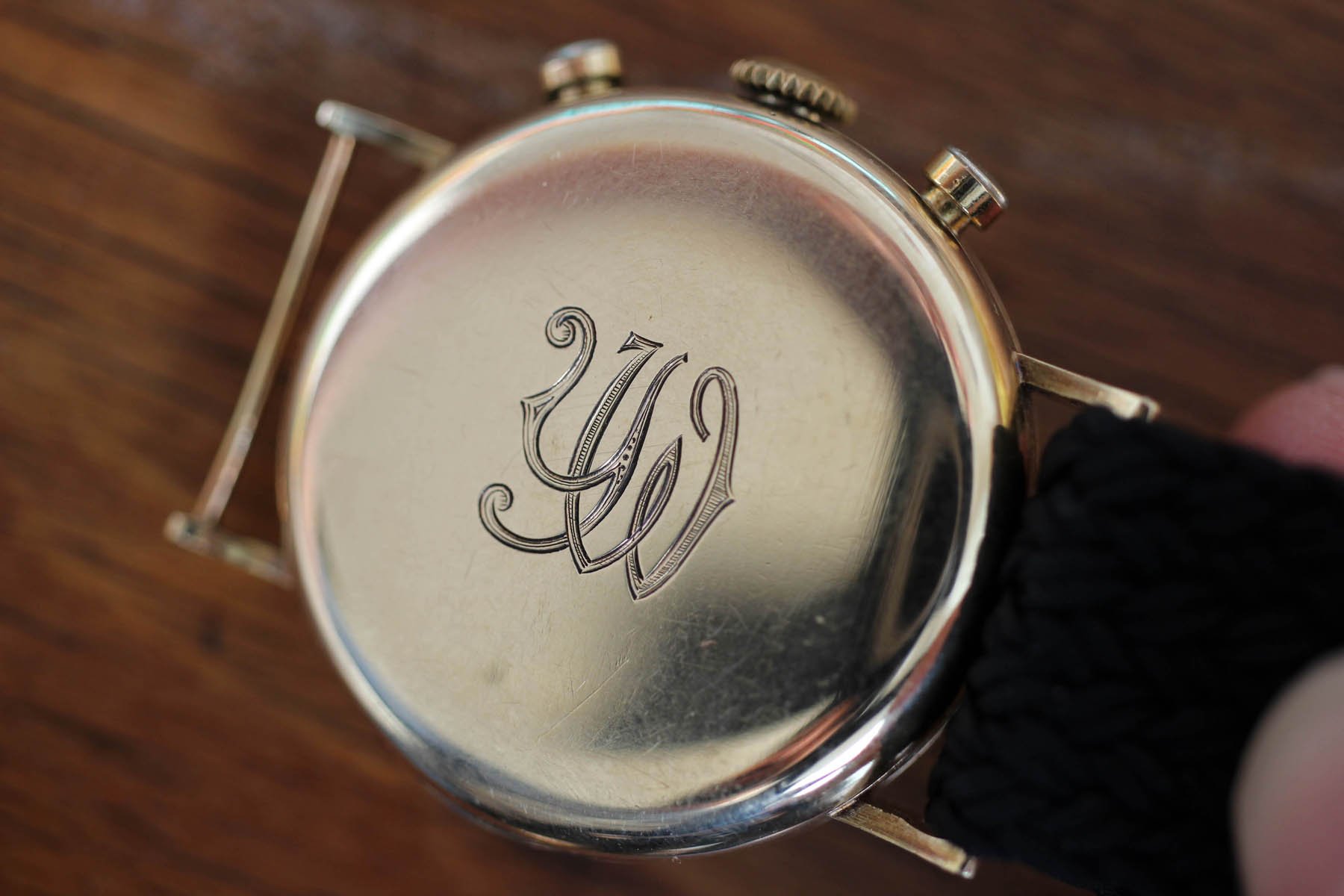 Interestingly enough, all watches belonged to the same owner. And I tell you, Mr. W. had to be a man of fine taste. The fact he owned and wore a Vulcain Cricket, a Tissot with the legendary C27.41H movement, and my holy grail Alpina 943 makes me really excited to know more about him and his life. I still don’t know if he bought the watches himself or he got them as a gift. The beautifully engraved insignia on the gold Alpina 943 case back might suggest the latter. All I knew for sure was that I wanted to keep all three wristwatches bearing his name together. They are very different but feel like part of the same family.

According to an Alpina history brochure published to celebrate the 130th anniversary, the Alpina 943 dates back to the 1940s, with no further precise dating. It’s powered by a quality Valjoux 22 movement marked 943. There was the same dial version with slightly more angular lugs. I just gave it another look and I can’t help it, I find the stick hands amazing. 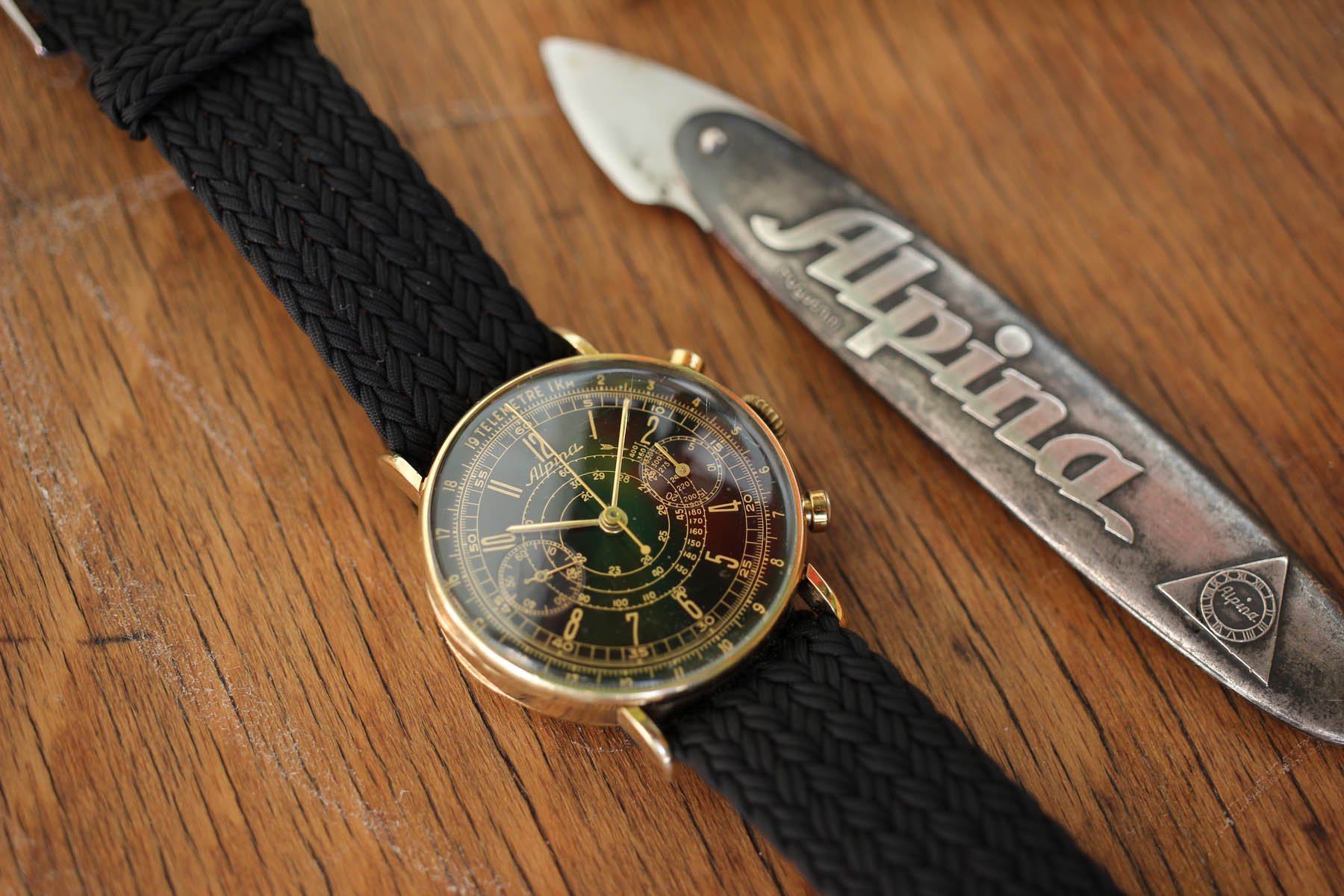 The Alpina 943 came into my collection as unexpectedly as no other watch before it. And I had a few other interesting acquisitions before such as the Alpina 10 Seastrong and the Cartier Santos Galbée, both with a unique history. The Alpina 943 is different, as it’s truly a rare specimen. I only saw one other example and it‘s sitting in the Alpina heritage exposition. Anytime I strap it on, it makes me happier. It is small but mighty. And, honestly, I have to tell you that I haven’t sensed so much charisma, elegance, and style in a 33mm case for a long time. Merry Christmas!