This year has been quite fruitful for me when it comes to unexpected finds. While studying more about the unusual, but witty weekly calendar 2084/2086 movement, I once again bumped into the often-overlooked watch brand Rodania. On today’s #TBT we will look at the interesting Eddy Merckx Permadate or the same watch branded Selectron Permadate.

I have a bike, but I am no biker. The most action my bike sees is when I take it on city-center rides with my daughter. Eddy Merckx was arguably the greatest cyclist to ever hit the road. When it came to the Tour de France, few can hold a candle to Merckx’s Palmarès. He won the GC five times. He snared the points and mountains jerseys with ease (and did so while riding his way to yellow in 1969). And, thanks to Lance Armstong’s disqualification(s), he still holds the record for the most stage wins with 34. 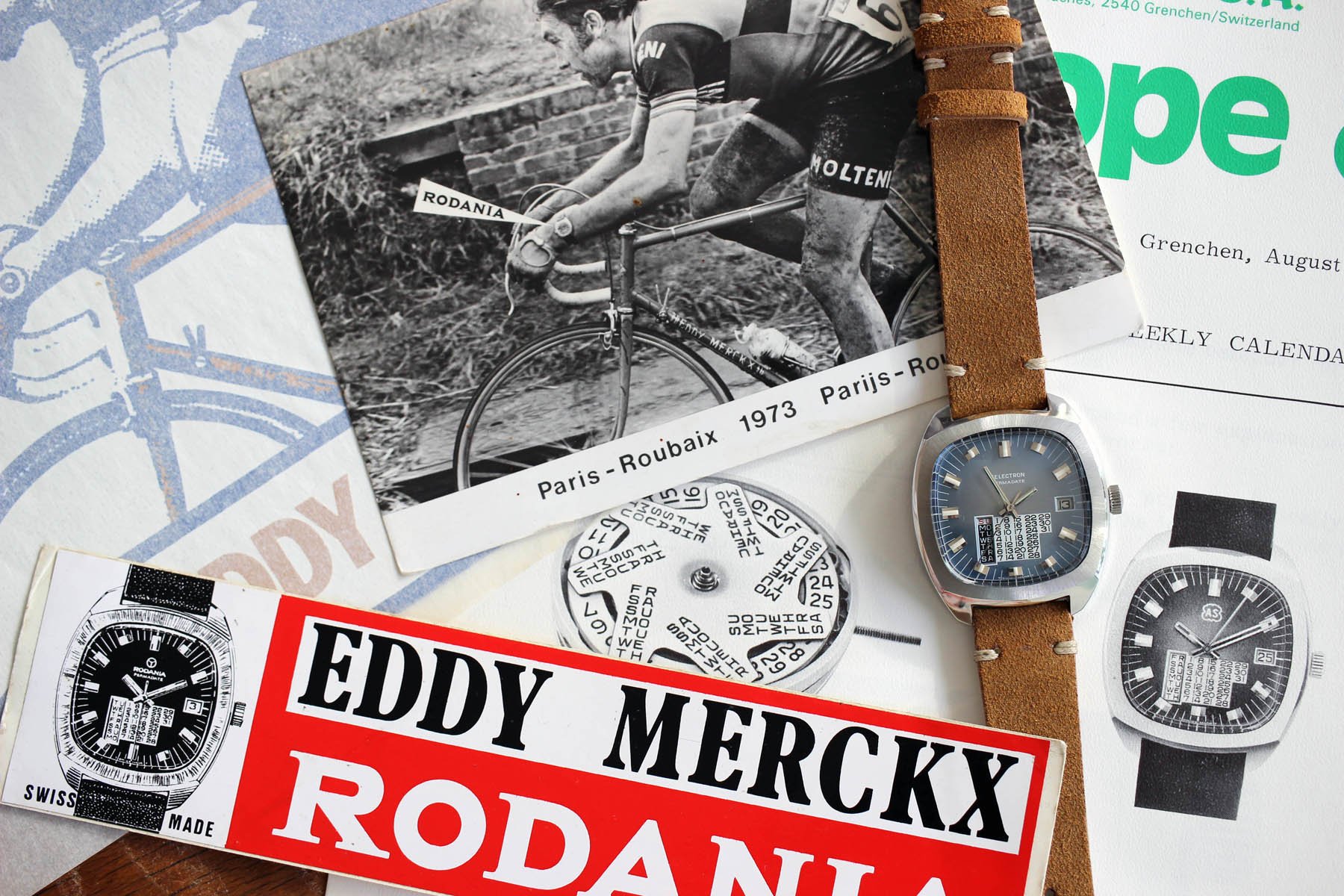 Eddy Merckx is, to cyclists, what Michael Jordan is to basketball fans or Wayne Gretzky is to hockey fans. These living legends made their sports thrilling theater. And yet, as famous as these great men are, their long careers took so many turns it is hard to keep track of them all. I bet many collectors have no idea that the Rodania brand even existed. I doubt even more that the Rodania Permadate is a watch many will find familiar. And what about the fact it was promoted by Eddy Merckx? No, I didn’t think so. Well, how about this: what would you say, if I told you that you can have the watch promoted by the greatest biker that ever lived for under €300? And it’s not just any ordinary watch!

My curious mind is always interested in learning something new about date watches. Once I got attracted to the unusual dial that seemed to have the whole monthly calendar printed on it, I searched for more and found many watches with an identical design. Not only did the movement seem to be the same, but the entire dial and case design. We have seen this concept of the „same universal design“ labeled by various brands many times. As an example, you can look at unusual complications such as parking-meter watches, electrically lit watches, or even popular super-compressor divers. 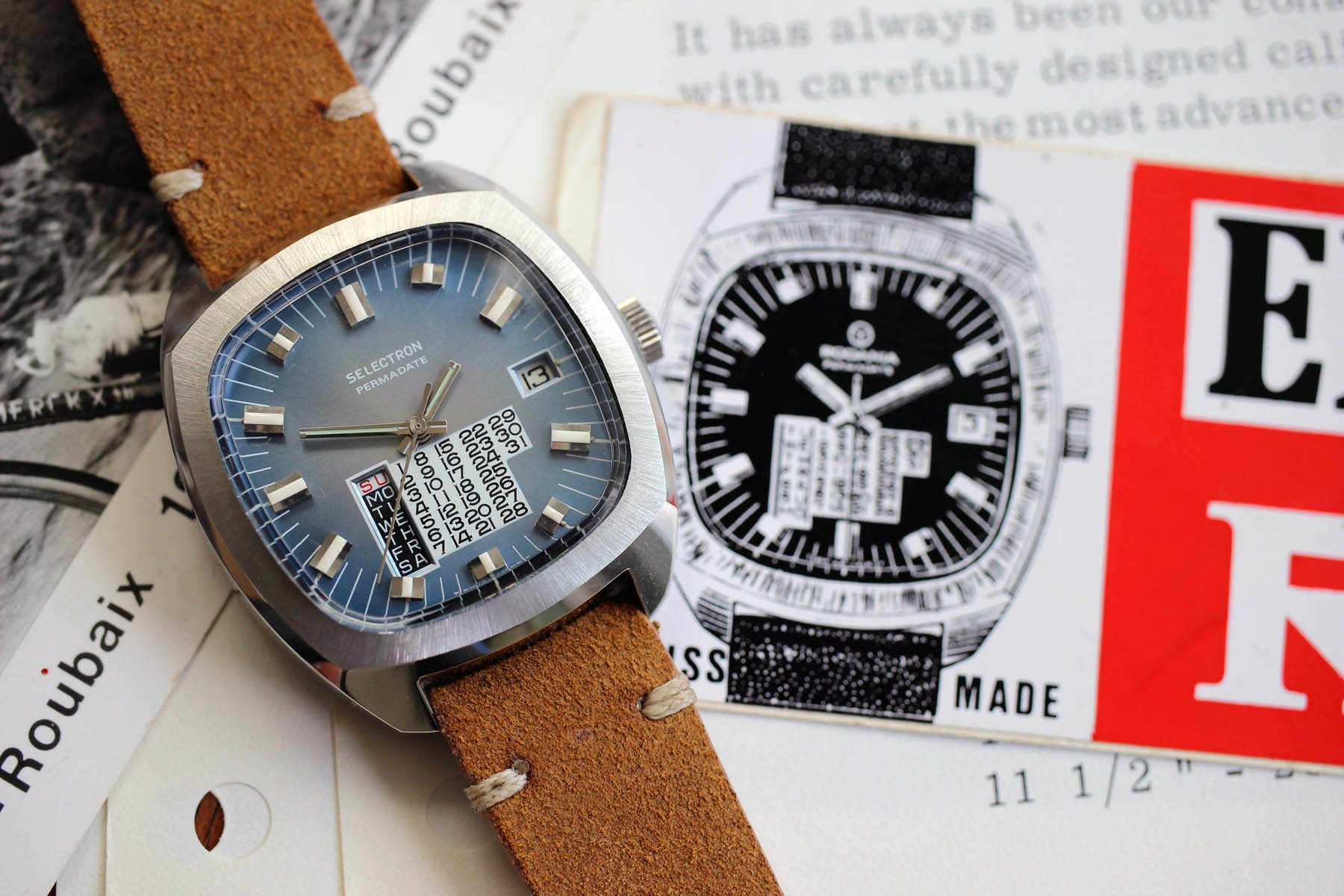 The real beauty of watches that Instagram doesn’t care about is the fact that you can buy a lot of cheap “accessories“ for them. This way, I picked up what seems to be an AS promotional magazine Periscope dated August 1973. All three pages explain the newly released calibers, a manually wound AS 2084, and the automatic version 2086 to potential buyers. 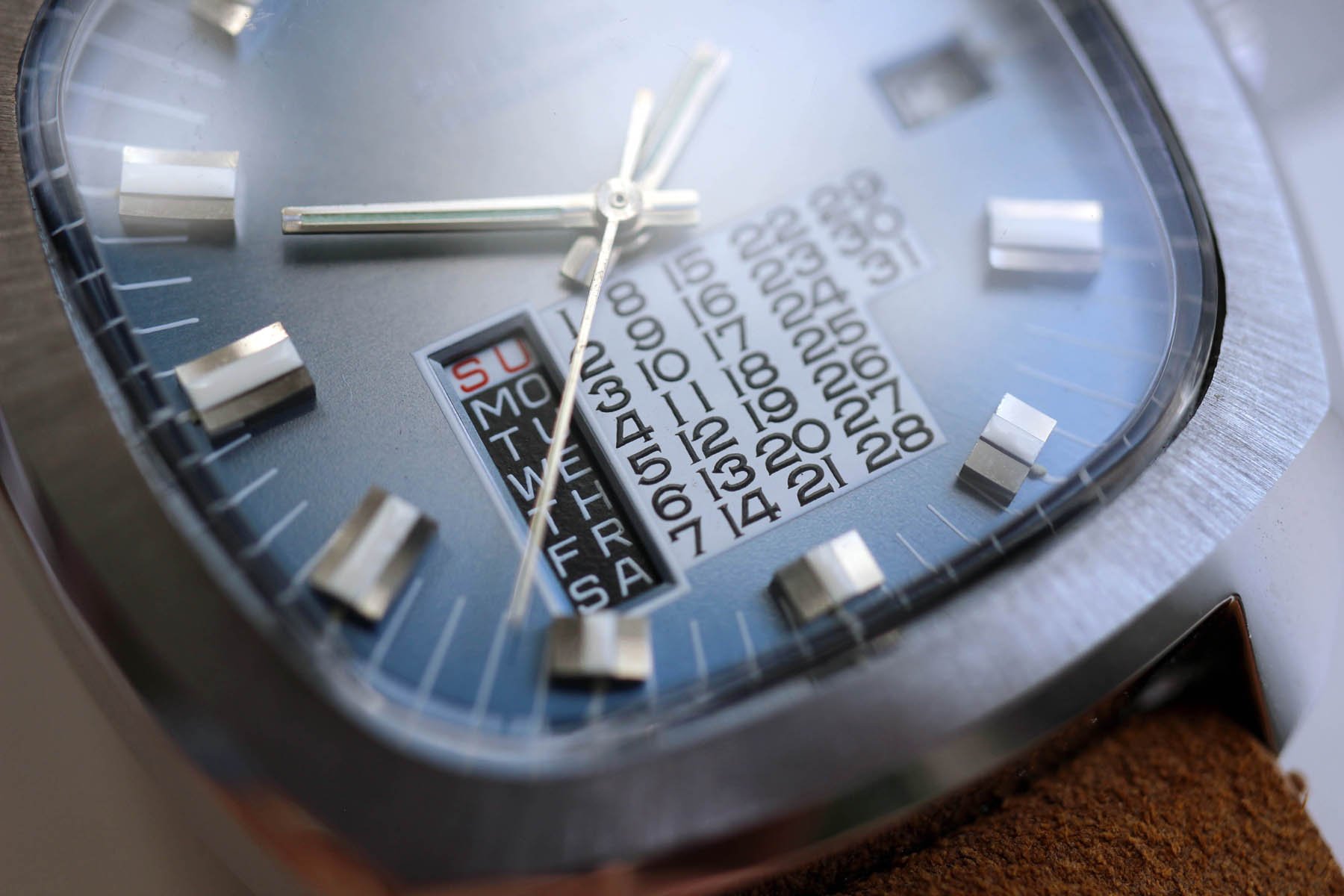 The function is pretty simple. The window at 3 o’clock shows the date disc, nothing unusual. But there is another rotating disc above it that has seven “chimneys“ with weekdays printed in all possible orders. If you pull out the crown into the middle position and turn it counterclockwise, you can see the weekdays re-arranging in a huge vertical window above 7 o’clock. As all the 31 dates are printed exactly opposite the days of the week, this special movement „enables the user to easily obtain the complete calendar for the month in a perfectly clear and legible execution“.

You can find the AS 2084/AS 2086 movements in different watches. Villard, Primato Super, Nevada, or Technos Executive to name but a few. You can also find it in two completely identical watches that even have the exact model name printed on the dial. They differ only in the brand name. The Selectron Permadate and the Rodania Permadate. Which brand was the original manufacturer of the Permadate design unfortunately remains a mystery to me. 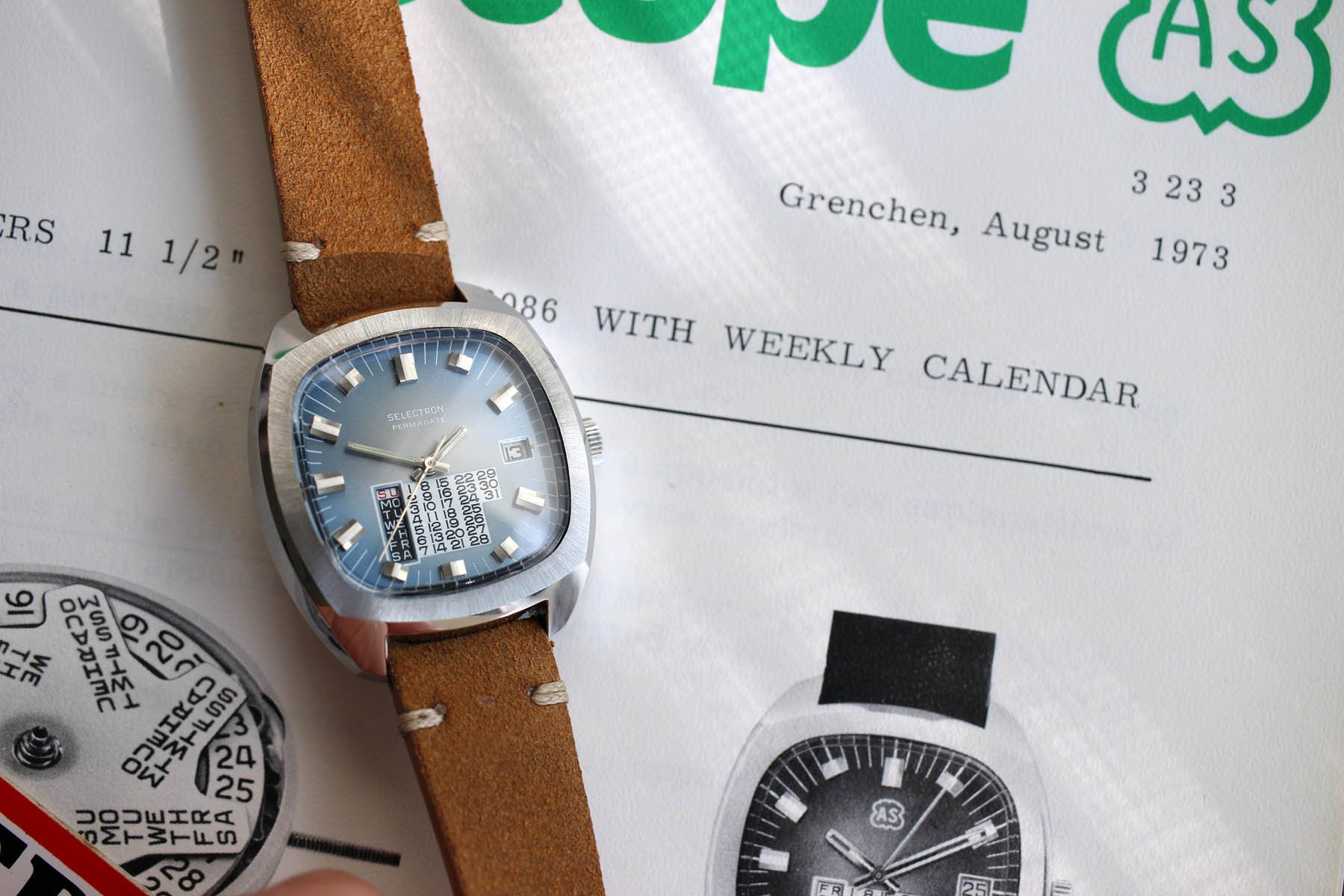 Rodania was a Swiss manufacturer that opened offices in multiple metropoles in the 1940s/1950s, including Caracas, Montreal, New York, Brussels, and London. It was quite strange that the Brussels branch, with it’s young and dynamic manager Manfred Aebi, became the hub for running the global Rodania operation. Just like there isn’t a single man that doesn’t know of Prim watches in Czechia or Slovakia, there isn’t a man in Belgium that doesn’t know of or own a Rodania. Belgium became the home for Rodania for decades. Understandably, Rodania became almost Belgian.

Why Rodania and Eddy Merckx?

It seems that Manfred Aebi was quite the marketing genius. He tied Rodania to cycling in the mid-1950s and the move clearly paid off. Just google some incredible shots of the Rodania racing support cars! The audible jingle RO-DA-NI-AAAA played by the lead car driving ahead of every race became legendary. According to the cycling blog The Inner Ring, Manfred Aebi heard Beethoven on the radio and he “borrowed“ the fifth symphony to create the cult Rodania jingle.

Did Merckx wear the Permadate?

I don’t know, as I don’t have a detailed picture. There is one picture where he is cycling with a watch that has the case identical to the Permadate. But it is impossible to read the dial. It seems that the only reliable solution would be to ask Mr. Merckx personally. The closest I got with my research is the big sticker with a Permadate model and a newspaper print ad promoting the watch next to a picture of Eddy Merckx. Interestingly, the promotional materials connecting Merckx to the Permadate I collected feature the watch without his own name on the dial. 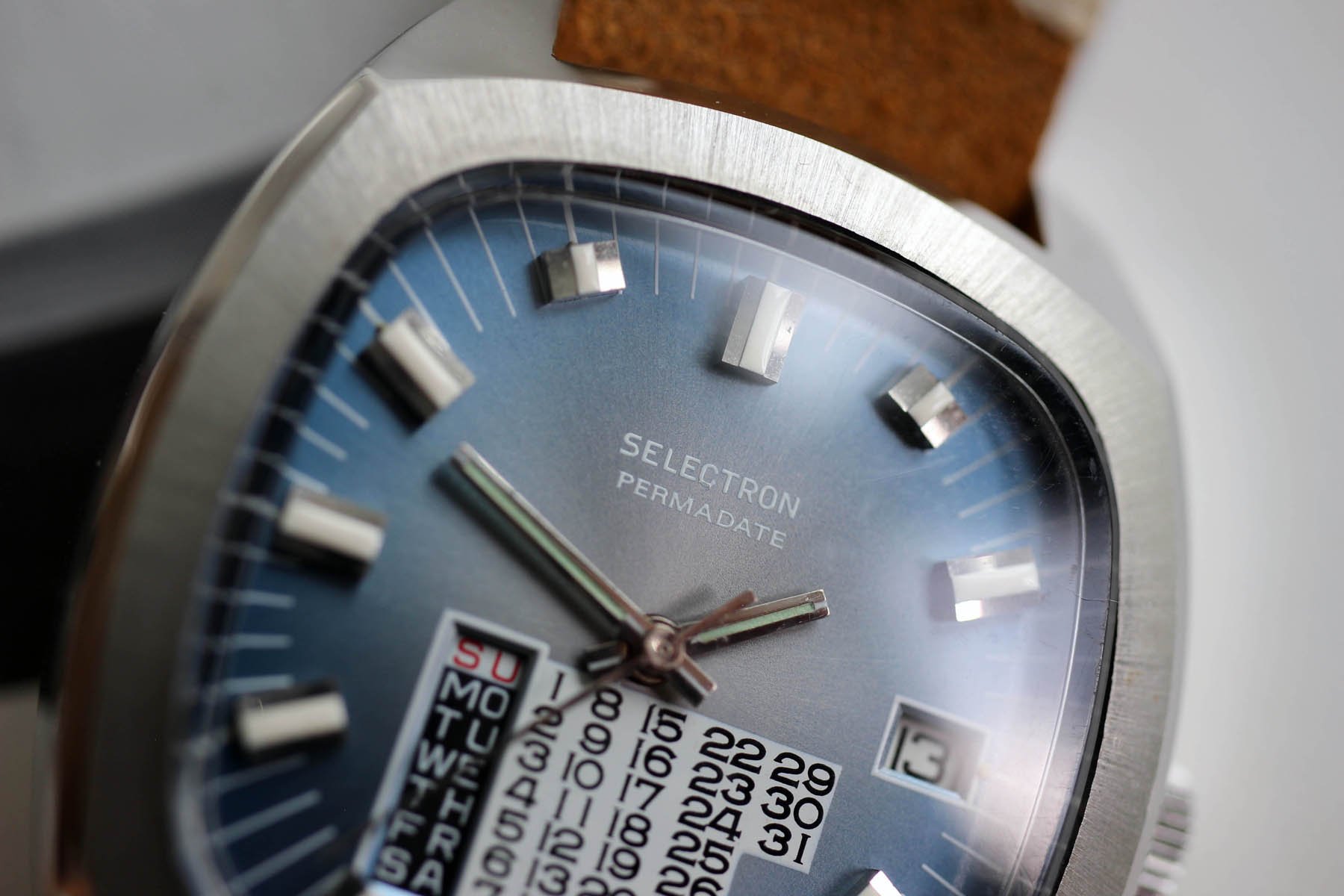 A watch friend of mine grabbed an almost NOS Selectron Permadate in distant Japan and, to my great pleasure, he was kind enough to part with it. It still has the sticker on the case back. Speaking about the case back, it carries the 2728-2 ref. number, which is identical to the reference numbers I found on the Rodania Permadate. There were obviously more (and a few pretty amazing) color variants available, including gold-plated or purple options. My Selectron Permadate has a cold blue-ish/grey-ish dial that reflects the light stunningly.

The case was the biggest surprise for me. I am not a big fan of TV-shaped cases, as they are usually too thick and bulky. But this one is really chic and I enjoy wearing it! As it happens with bulky watches from the 1970s, I expected a fluffy pillow. Unexpectedly, I got a highly wearable and pretty elegant case with a 36mm diameter. The thin top edge has a sunburst effect that contrasts nicely with the polished sides. The beveled edges are a thoughtful detail. You can see it not only on the sides of the case but also on the crystal. It creates an interesting 3D-effect around the edge of the dial. 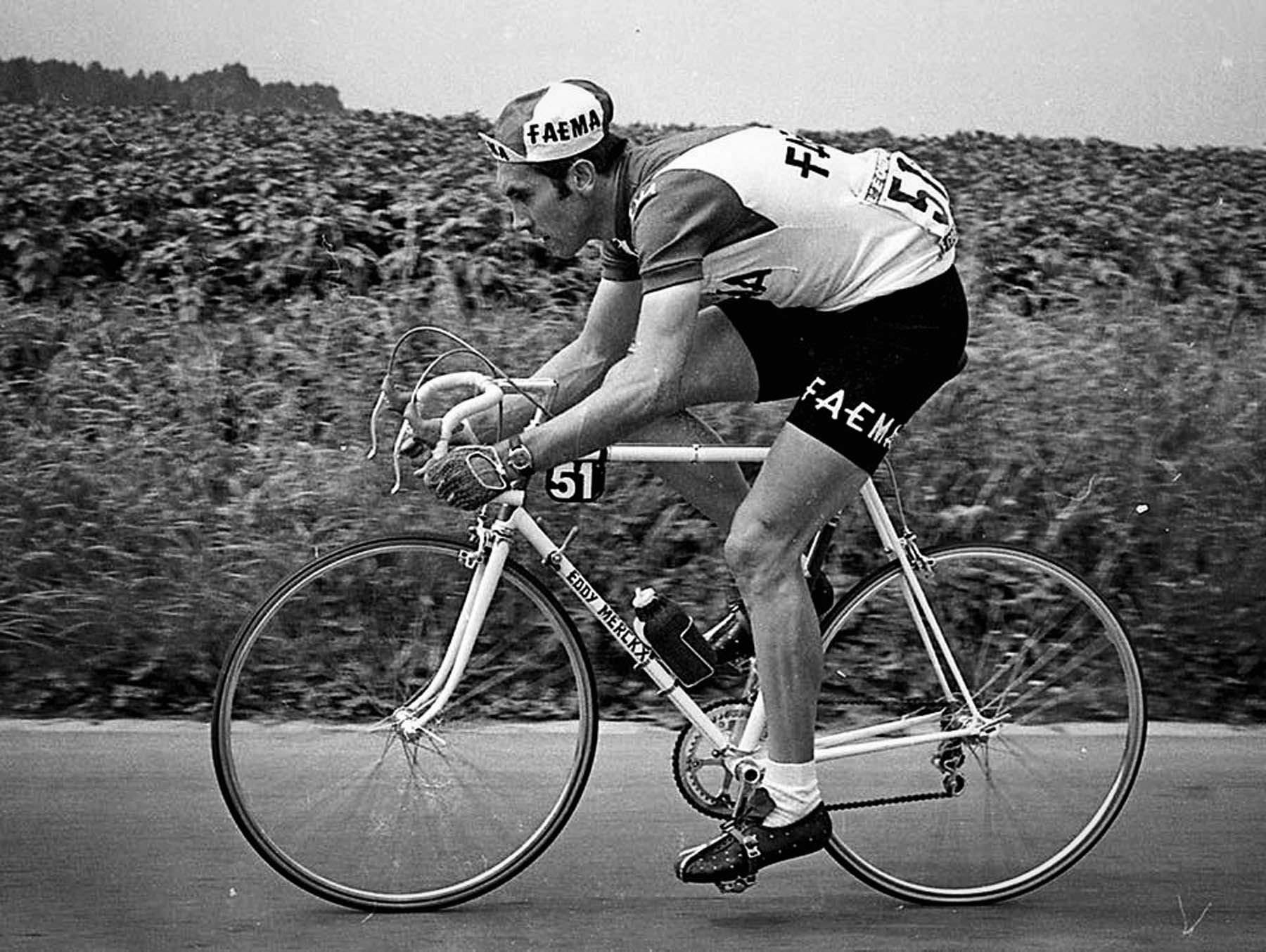 The indexes look like huge boats perfectly anchored in a blue bay. They are steel, polished, and with a glossy white stripe in the middle. To my great pleasure, the weekday’s disc on this piece is written in English and has a contrasting black background. Reading it was never a problem, even if it covers half of the dial and the minute hand hovers over it almost half the time.

With the home office in the early days of the pandemic, my Wednesdays often looked too much like my Sundays. I sported my Selectron Permadate often. We became friends. I always loved it, because of the unusual movement. I love it more because it was not Instagram that uncovered this watch for me. The timepieces that I come across in an elaborate way as a result of studying make me the happiest. This time, it came with an interesting story and an interesting ambassador. There is still so much to discover. About Permadate, about Rodania, about other forgotten watches. Happy hunting.