The Junghans Olympic has everything, except for a Heuer logo on the dial. And I dare say it has even more.

The case detailing, extra robust pushers, a majestic crown, a killer strap, vivid original dial with few nice quirks and an overall condition that any safe queen would envy. This is basically the self-summary I would put atop my Curriculum Vitae were I this particular Junghans Olympic watch.

A friendly reminder to myself that I once said I will never buy a cushion case watch. To explain, I had two legendary Heuer Autavia ref. 73363, in the “Orange boy” style and Jo Siffert colors, both sourced locally from original owners. I was never particularly fond of the cushion case, but I bought it in my early days of watch collecting as I was under the Heuer spell. Unfortunately, they were so big on my wrist I thought I wouldn’t make it through the door. After a year of not wearing them once, I just sold them together to an older fellow collector. I don’t remember any cushion case watch succeeding in catching my eye since. 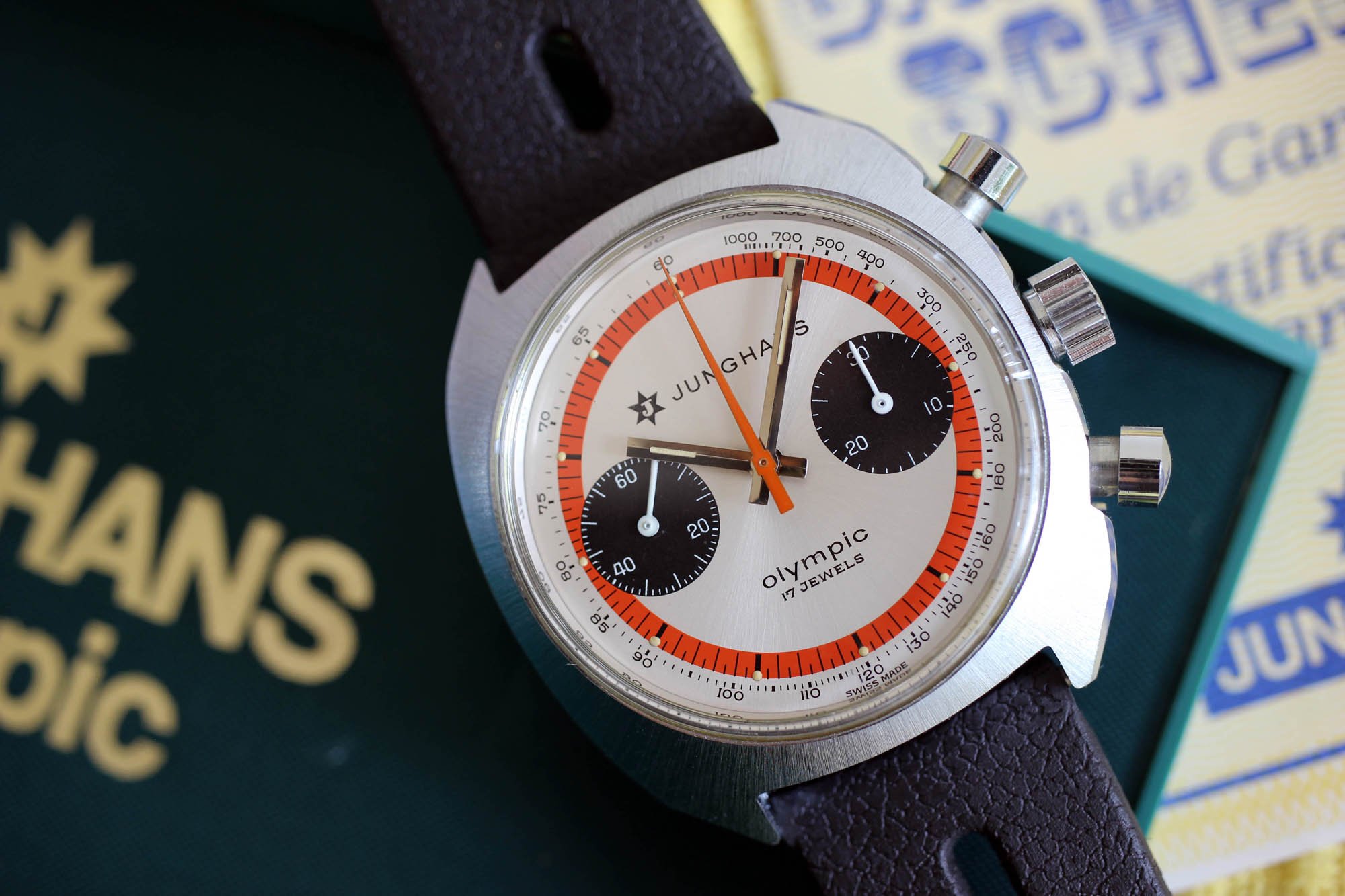 When recollecting that day of our first encounter in Budapest, I strongly remember three things. Foremost it was the NOS condition featuring a case so sharp and untouched that I immediately spotted it sitting on the thin-but-wide dark green plastic box. The Junghans logo brought back memories of my strong relationship with the brand. I remember as if it were yesterday when I was sitting in a fancy jewelry shop in Vienna years ago, buying my first modern automatic watch. It was a Junghans Meister. The last reason why I reached for this watch was the minute track throwing bricks at me. I mean, look at that color! This deep brick red reminds me of my favorite Alpina La Ronde. 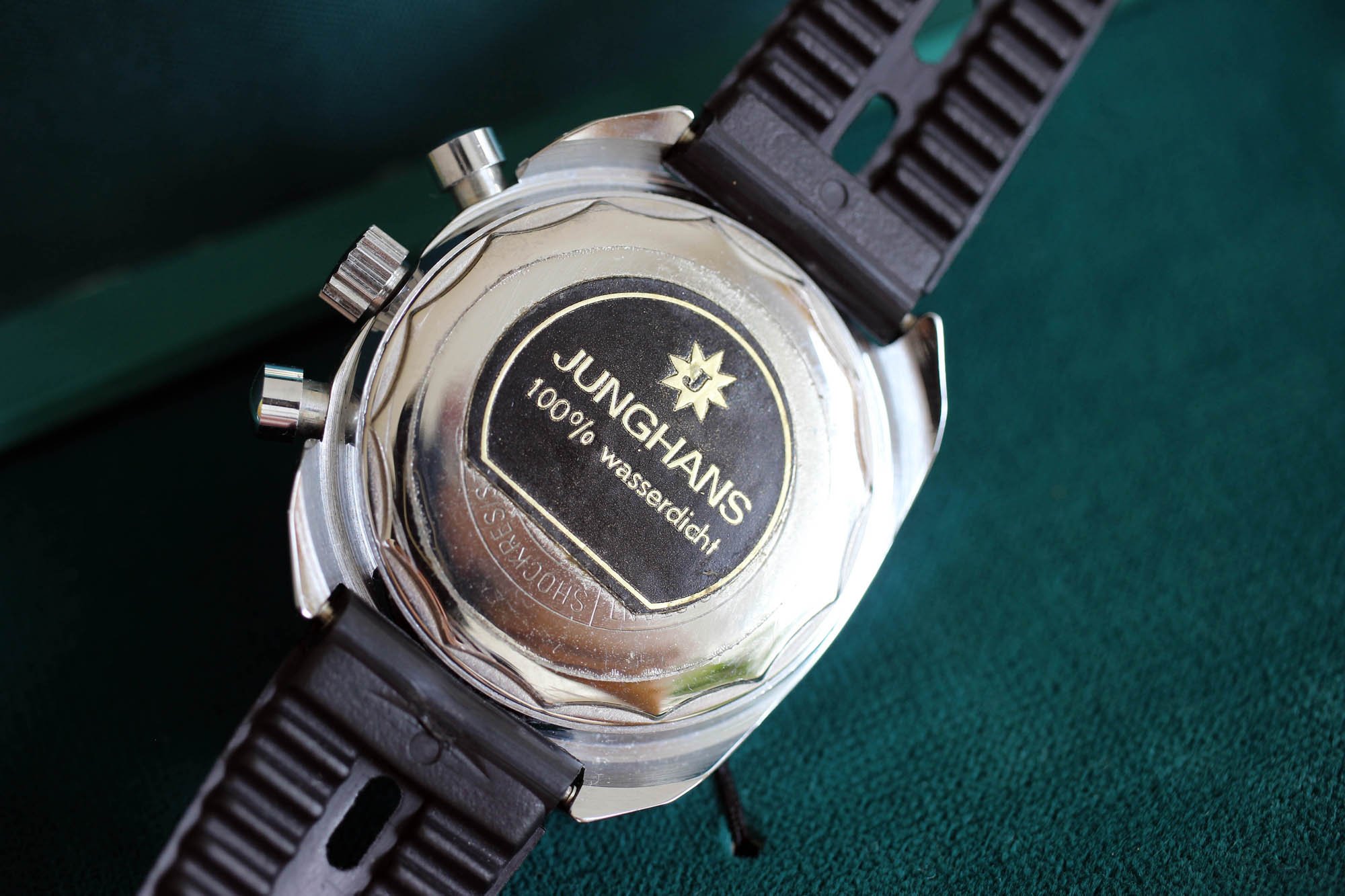 The Junghans Olympic dates back to early 1970. It was not only the world-famous Longines brand but also the local Junghans which were trusted with the responsibility of keeping time for the Olympic Games. It is interesting to see both of their Olympic watches sitting next to each other. Even though the Junghans Olympic and Longines Conquest 1972 came from the same era, they are very different watches. It is also important to highlight that Junghans had an entire series of Olympic branded watches, including the better-known bullhead model with a date. 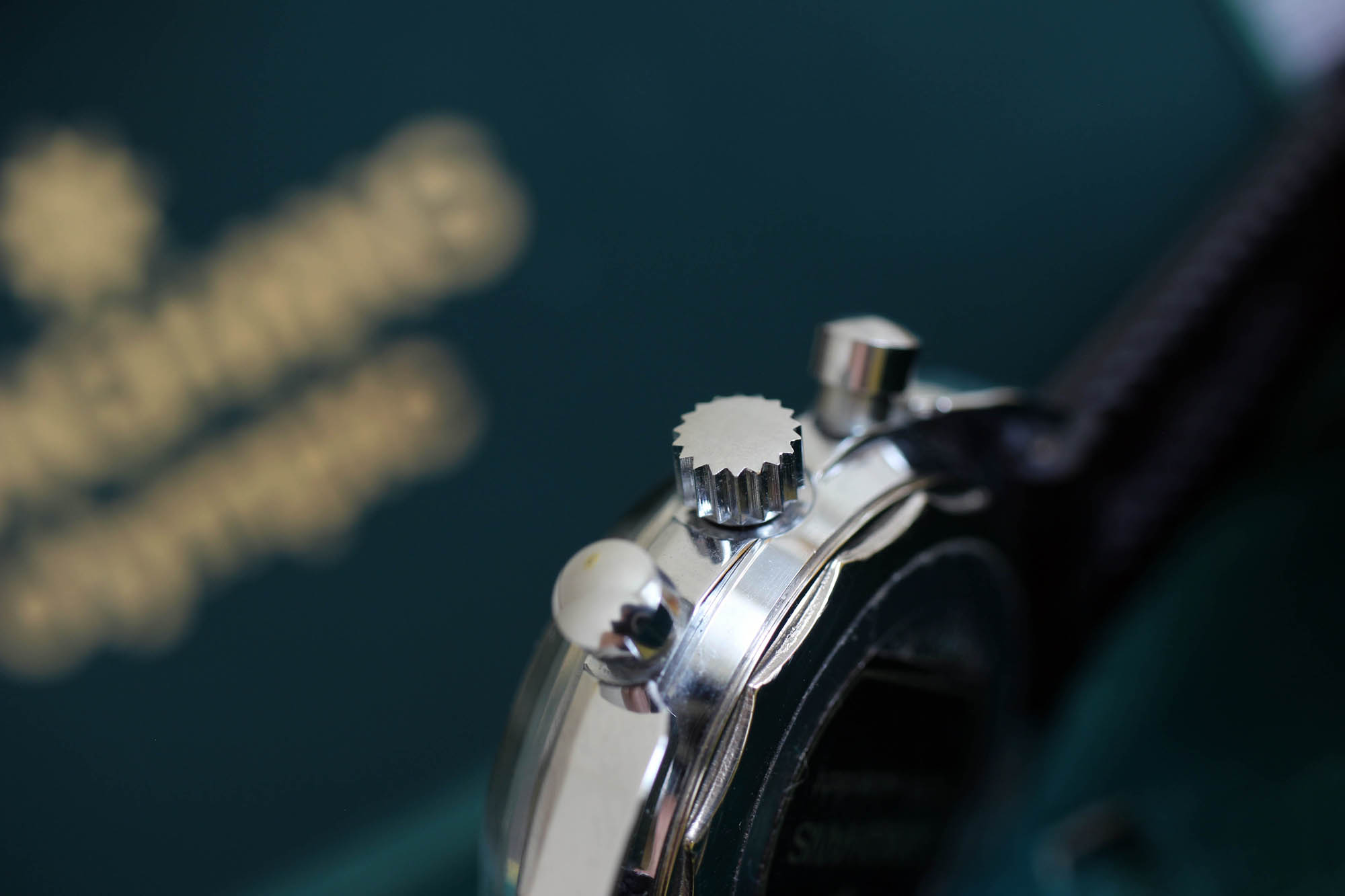 I wouldn’t be surprised to learn that Junghans gave the job of sketching the cushion case to a designer who actually didn’t like the cushion case. My kind of guy. The more I look at it, the less cushion I see. Notice the spike-like lugs. Follow the wide beveled edges from the tip to the pushers and see the sharp corners protruding through otherwise round lines. The cut into the case mass goes so deep you can see a notable step, especially on the right side of the case around pushers.

Brainwashed with all the 42mm cushion case Heuer Autavias you see on Instagram, would you guess this is hardly 39mm?

The very same thing is visible around the crown. I have to say that the case finishing around the pusher and crown compartment became one of my favorite watch details. When looking at it from the side, the middle part of the case is cut off completely from the bottom. It gives the case an extra sporty and thin look. Brainwashed by all the 42mm cushion case Heuer Autavias you see on Instagram, would you guess this is hardly 39mm? Not much of a difference in a picture, yet a completely new dynamic on the wrist. 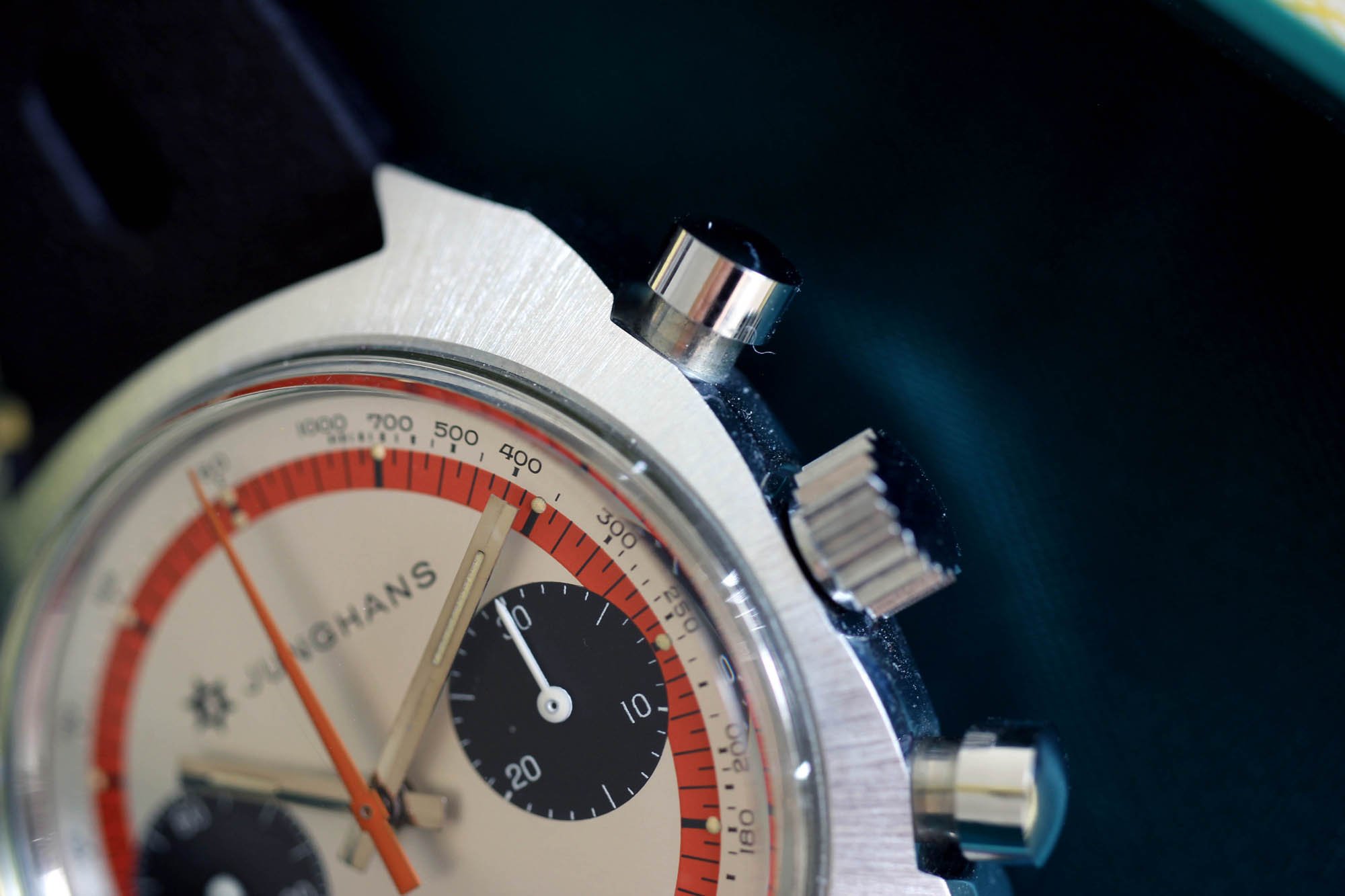 Speaking of dynamics. While the case shrank a bit, the pushers seem like they got a dose of steroids. I feel as if the case designer wanted to showcase the pushers’ musculature. Mission accomplished. I am not afraid to play with them. It’s probably their short and robust neck that makes me feel like the pushers are indestructible. When I see them, I don’t feel they have off proportions. They are, to me, an example of pusher perfection.

The crown under your fingers

The previous paragraph explains why the crown doesn’t need any guards. Winding the watch is fun, not only because of the Valjoux 7733 caliber and the crown size. When looking at it from the side, you will notice how deep the cuts in between the teeth go. The teeth are big and not as dense as with most watches. If you remember the Junghans logo from that era, you will find some similarities with the crown styling. Not sure if it was the styling or just the new old stock condition, but I felt a secure grip and connection with the watch when touching it. 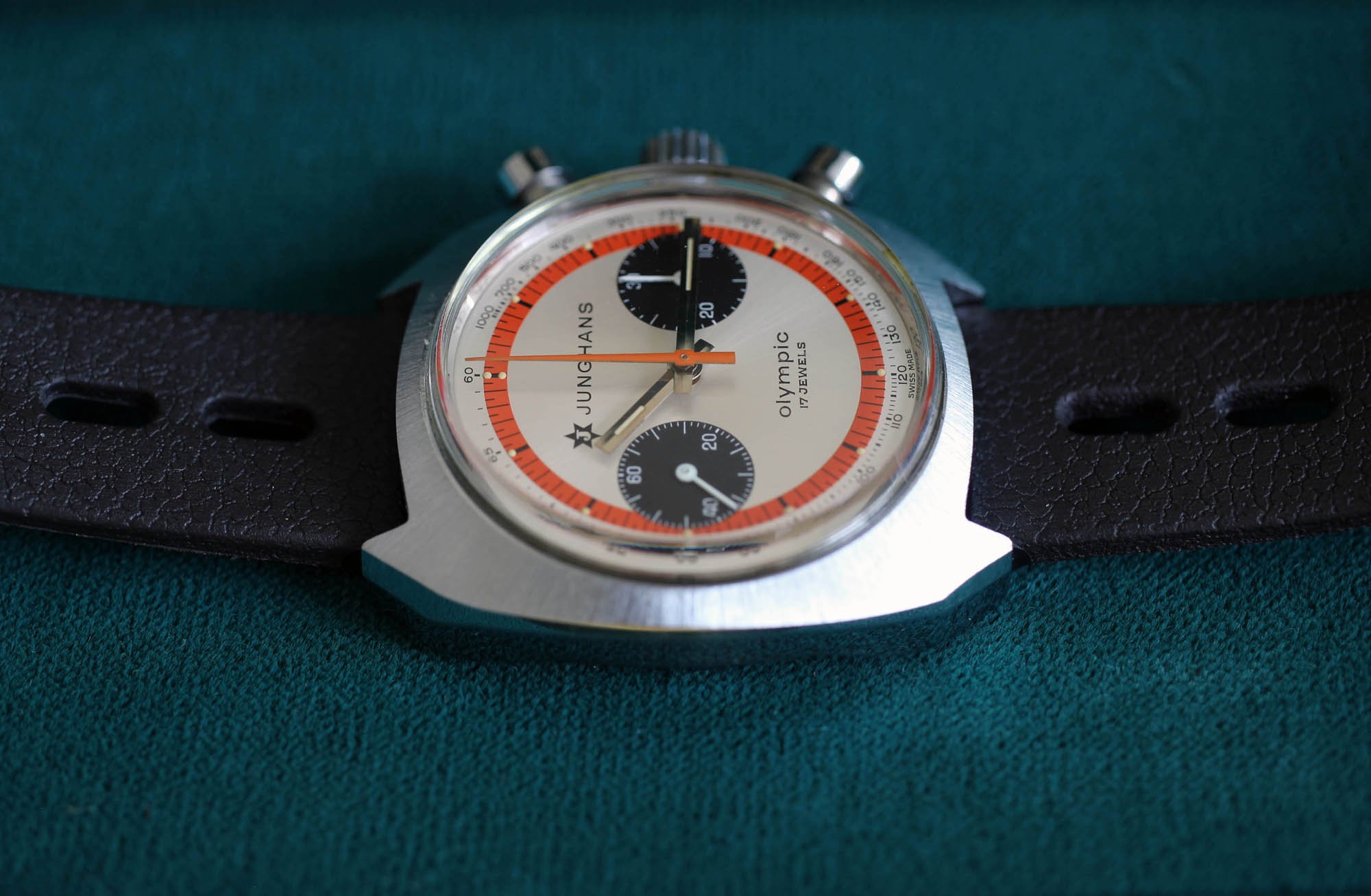 I was not able to crack why the dial had such a particular impact on me, so I spent some time hypnotizing it. I already spoke about the brick-red ring that looks like a running track in a huge silver stadium. The thing is that this wide track includes black minute lines and also thicker lines for hour indexes. That’s it. No Arabic numerals to help you read the time. This unusually sparse design hands center stage to an otherwise tiny tachymeter scale. Do I mind? Not at all.

The black Junghans “J” star on the dial is very vintage. The tiny lume dot placed at the edge of every hour doubles up at 12. Interestingly, the typical design of two dots next to each other changes for colon styled dots. The black strap with a leather structure imitation is very comfortable and looks good on the wrist. I don’t remember seeing this style before. Let’s not forget the Valjoux 7733 beating inside. Sooner or later, you need one in your collection. An original black sticker reading “100% wasserdicht” is another valued detail closing the perfect story of this hardly worn beauty. 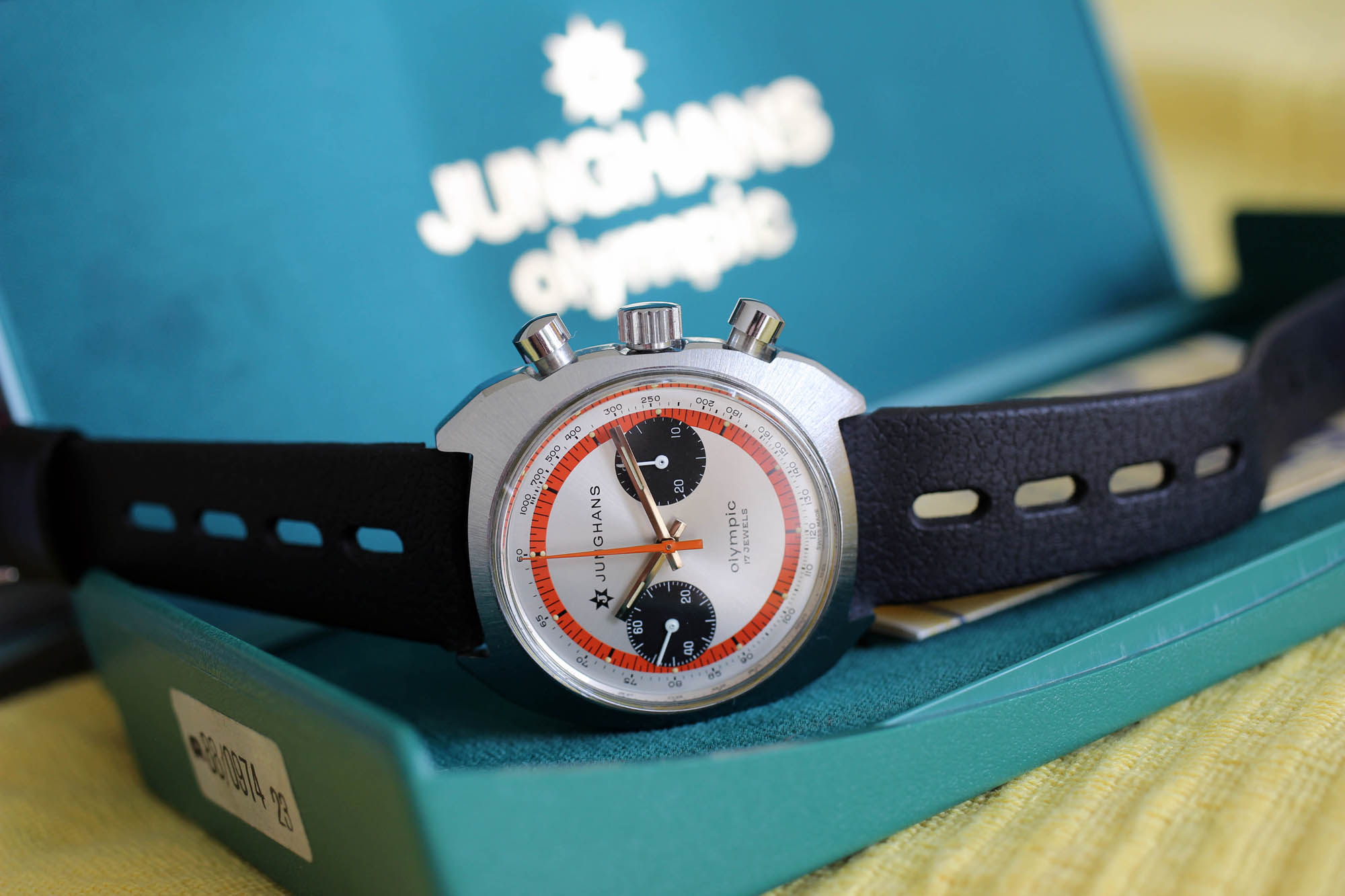 If there is somebody that is surprised by this watch, it’s me. It was another lesson in keeping an open mind and not be prejudiced against revisiting concepts I had buried in the past. The Junghans Olympic isn’t a shining example of the best time-reading watch. It isn’t an all-steel watch, and it doesn’t have a rotating bezel. Well, it doesn’t need to have one. By understanding the beauty of the dial details and case manufacturing originality, you might get a precious, yet underrated friend for everyday use.

Thanks to 10ora10 Budapest for having this watch reviewed for Fratello Magazine readers.