After I finished last week’s TBT about the Heuer Monaco, I immediately thought of this watch. The original copycat is what I call my lucky Alpina “Monaco” AL 55-126 44 pick. Now was the perfect time to pull it out from the safe and give it some wrist time.

Neither the Heuer Monaco ref 73633 nor the Heuer Monaco ref. 1133G (the gray date version without the 12-hour counter)  are particularly accessible watches today. That’s exactly why I went for this unusual Alpina when it popped up on eBay. I bet I am not the only one thinking, that the designer who first sketched the Alpina AL 55-126 44 had a few Monaco watches around. 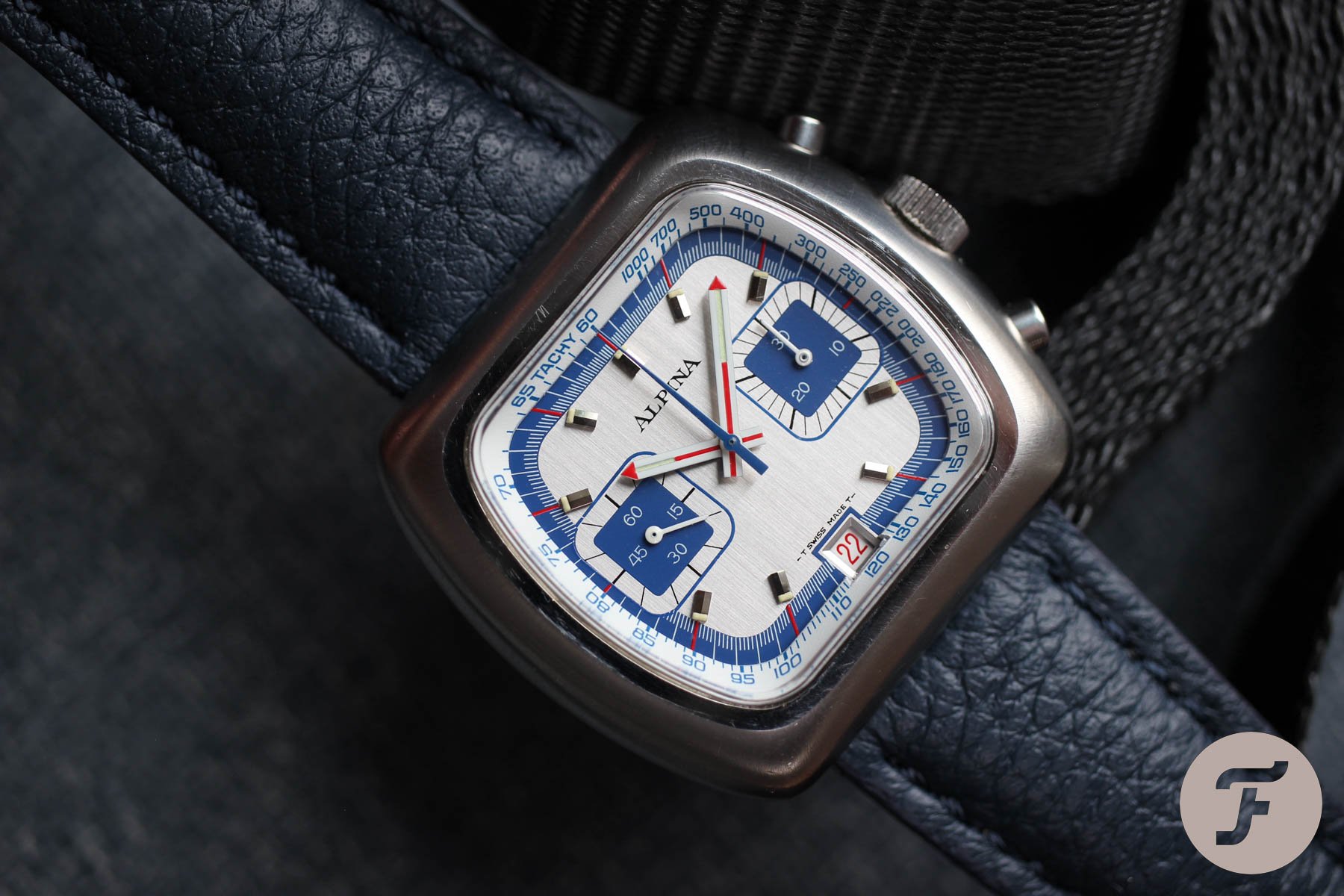 No hunting of the Alpina “Monaco”

So how exactly did I stumble across a watch I’d never heard of before? Alpina is my beloved underdog and I have robots set on all available (and some unavailable) sites. With no particular model in mind, I am constantly flooded with emails featuring recent auction listings. These often include tons of garbage. If I am lucky enough to open an email at the right time, I might spot something unusual. And that is how I happened upon this Monaco lookalike.

This Alpina “Monaco” was listed by a German antique dealer selling it on behalf of a client. I don’t think there was any real fight and I landed it for €300. That’s not a bad price at all for a wild, unusual chronograph powered by a Valjoux movement.

Flat on the top, flat on the bottom, and voluptuously curvy sides. Alpina took this inspiration from the Heuer Monaco. However, it must be noted that this version is slightly more “J-Lo” than the source material. This is a watch full of swagger, and its thick metal case is unapologetically individual. That said, it remains easily digestible and a look one could imagine having many fans.

This case reminds me of the Porsche 911s of the same era. When I look at the Alpina “Monaco” I see the thick impact-bumpers that came with the 1978–1983 911 SC. Those chunky bumpers, insisted upon by American safety legislation ruined the cult Porsche curves for many. As it seems, in the late ’70s and early ’80s, there was much in common between car and watch designs. 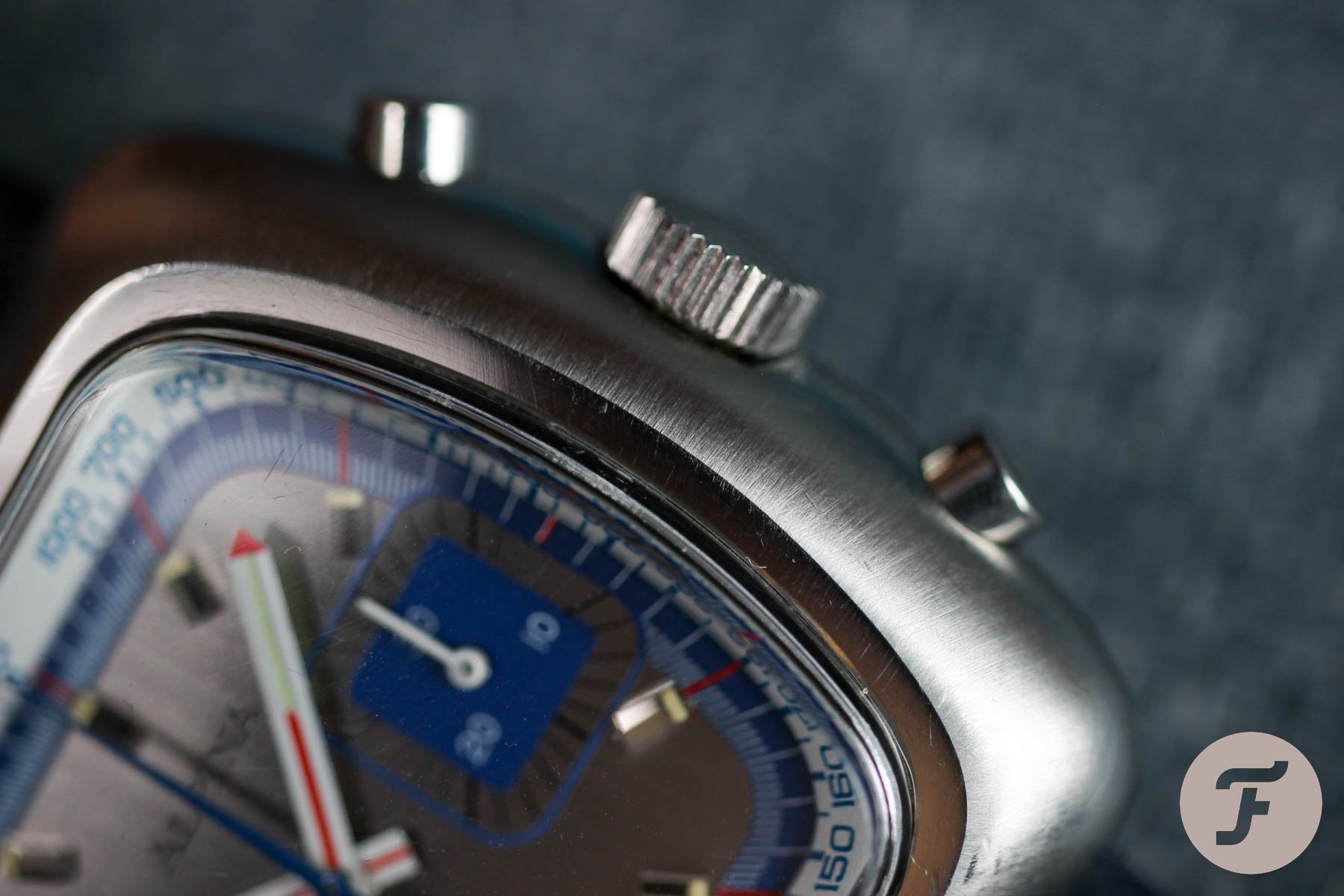 The sun is shining

Unlike the Monaco, the Alpina has no sharp edges. The case corners (if we can even call them corners) are perfectly round and consistent. Tiny imperfections can be found in the watch case but only if you turn it around and watch the light play on its surfaces. I am happy I landed a very lightly worn example with very few scratches. Otherwise, the sunburst effect that runs through the whole case down to the case back would be ruined. Also, notice the approximately millimeter-wide top flat line around the plexi. It is polished to maximum shine and perfectly contrasts with the sunburst.

The bare metal structure on the dial feels cold, but the white inner tachymeter bezel insert softens it.

When you dive under the plexi, you will see the untouched silver dial. Inspired by the case finishing, it has a deep and perfectly visible horizontal brush treatment. The bare metal structure feels cold, but the white inner tachymeter bezel insert softens it big time. Indexes in the Monaco-like subregisters have no color background and are printed directly on the metal. The result is a light and airy feeling. Notice also the obvious printing imperfection of the left subregister frame. It would be unacceptable for today’s standards, but I find it as a crying symbol of the painful war against quartz technology. 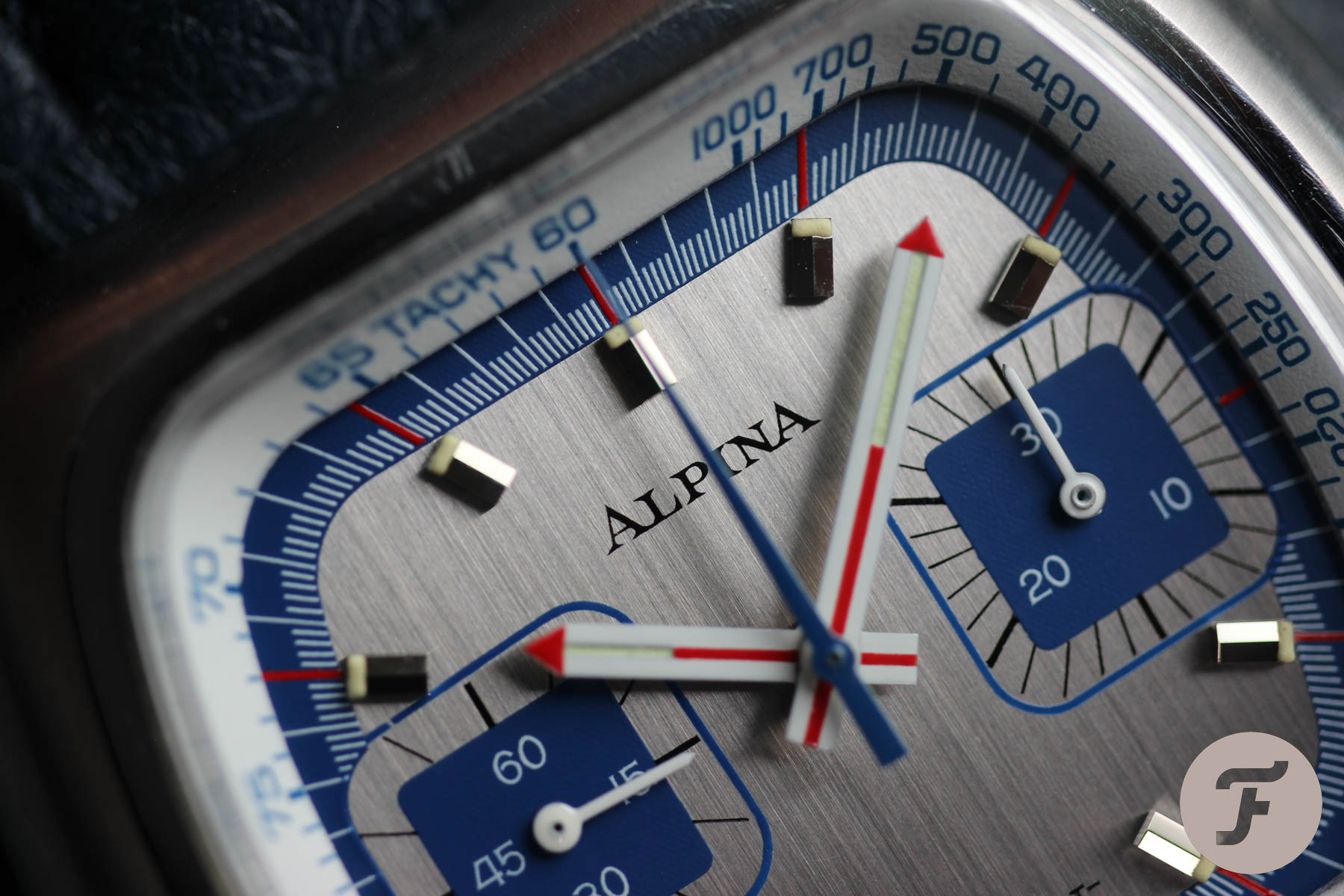 The Heuer Monaco is not the only reference you can see. Another quite sought-after watch is the Lip “Daytona“ chronograph. I guess it is a mesmerizing combination of the subregister design and color selection. Blue would be a very simple and inaccurate description. You can see the same tone of INDIGO on this Alpina. It’s intense. It is full and a bit “heavy”. But while it’s printed only here and there, it’s irritatingly good. Especially when you see it spiced up with red racing details.

18,000 vibrations per hour rank Valjoux 7734 among the classy-vintage movements. It’s quite loud and clingy, but reliable. It’s one of the movements you want to have in your collection. 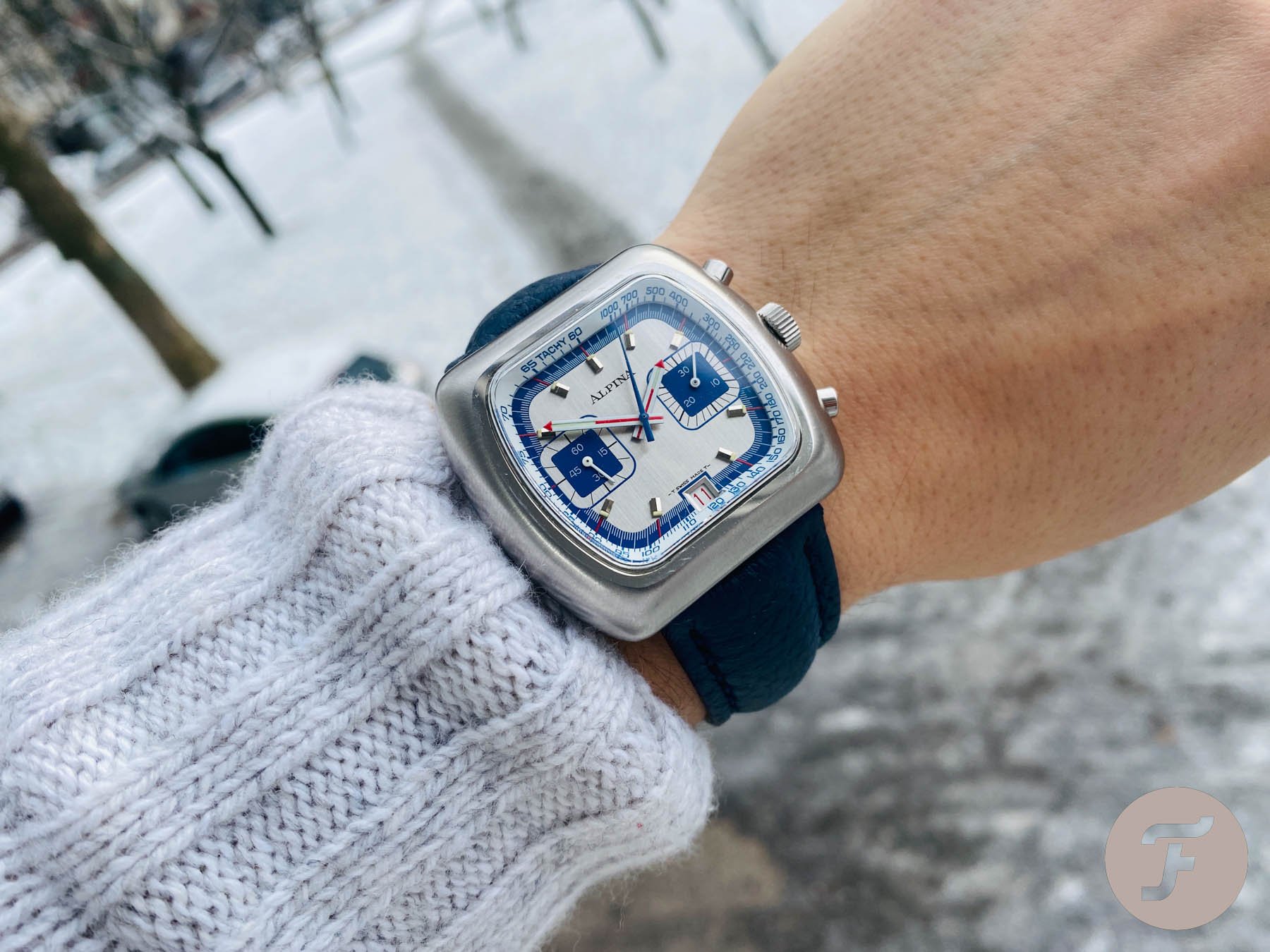 I only found one other Alpina “Monaco“ piece that was auctioned in 2016. It’s exactly the same piece as I have, it just has a killer bracelet. I don’t know if it’s original to the watch, but I wouldn’t be surprised. My Alpina “Monaco“ came bare. I spent some time searching for a proper strap. I wanted it to be blue, thin, and tapered to achieve the vintage feel. You tell me if I did a good job. To fix the leather strap was also quite painful, as I had to bend the spring bars to fit it into the super-wide 22m lugs.

The Alpina “Monaco” AL 55-126 44 is perfectly sized. It feels neither big nor small. The crown is slightly recessed into the case and winds comfortably. That is a good, if oddly underrated, feature for a manual wound watch. I also like the integration of pushers into the case, which I like even more than on the original Monaco. I just hope I will never break the crystal, as I am not sure if I will ever be in the mood to source a replacement. Until that happens, I am sure I will enjoy the perfect view of the red-tipped “Monaco“ hands. Happy hunting.

Hot Topics
Introducing: The New Seamaster Professional 300M 60 Years Of Bond — With A Special Animated Case Back
105 comments
Are You Still After An Omega × Swatch MoonSwatch?
84 comments
It’s Time To Invest In A Dress Watch — Our Picks From Breguet, Omega, Grand Seiko, And More
72 comments
The Rolex Waitlist Conundrum — How Much Will The Price Of Your Watch Increase While You Wait?
50 comments
The Best Omega Speedmaster Watches Of 2022
40 comments
Popular
An Overview Of All Omega Speedmaster Apollo XI Models
Robert-Jan Broer
17
Hands-On With The Patek Philippe Nautilus 5740/1G
Robert-Jan Broer
2
Hands-On: Rolex GMT-Master II in Steel and Everose Gold
Robert-Jan Broer
4