One of my most exciting reveals
Tomas Rosputinsky
comments 14
Share

I’ve hardly ever been as excited as I am today. The mystery of the Gallet Big Date chronograph puzzled me for years. Was it real or not? Not even the greatest Gallet collectors I know could help. All that changed when I bought a copy of the Joseph Hagn Wholesale Merchandise Catalog from 1958.

Let’s take it from the very beginning. And when I say “very beginning,” I mean my very first story for Fratello. It was on January 10th, 2019 that I introduced you to the Venus 211 caliber in a Bucherer chronograph. Four years, two days, and more than 300 of my stories later, we are here again with the fascinating Venus 211, featuring a big date that goes from 00 to 39. As befits a proper anniversary celebration, we have something unique today!

During my research on the big-date Venus 211 movement, I bumped into a movement-less watch case branded Gallet with a big-date aperture on the dial. It was back in 2018, and before I made up my mind, the case had been sold. Someone stole it for as little as $60 if I remember correctly. I wasn’t that eager back then because I was not sure about its authenticity. 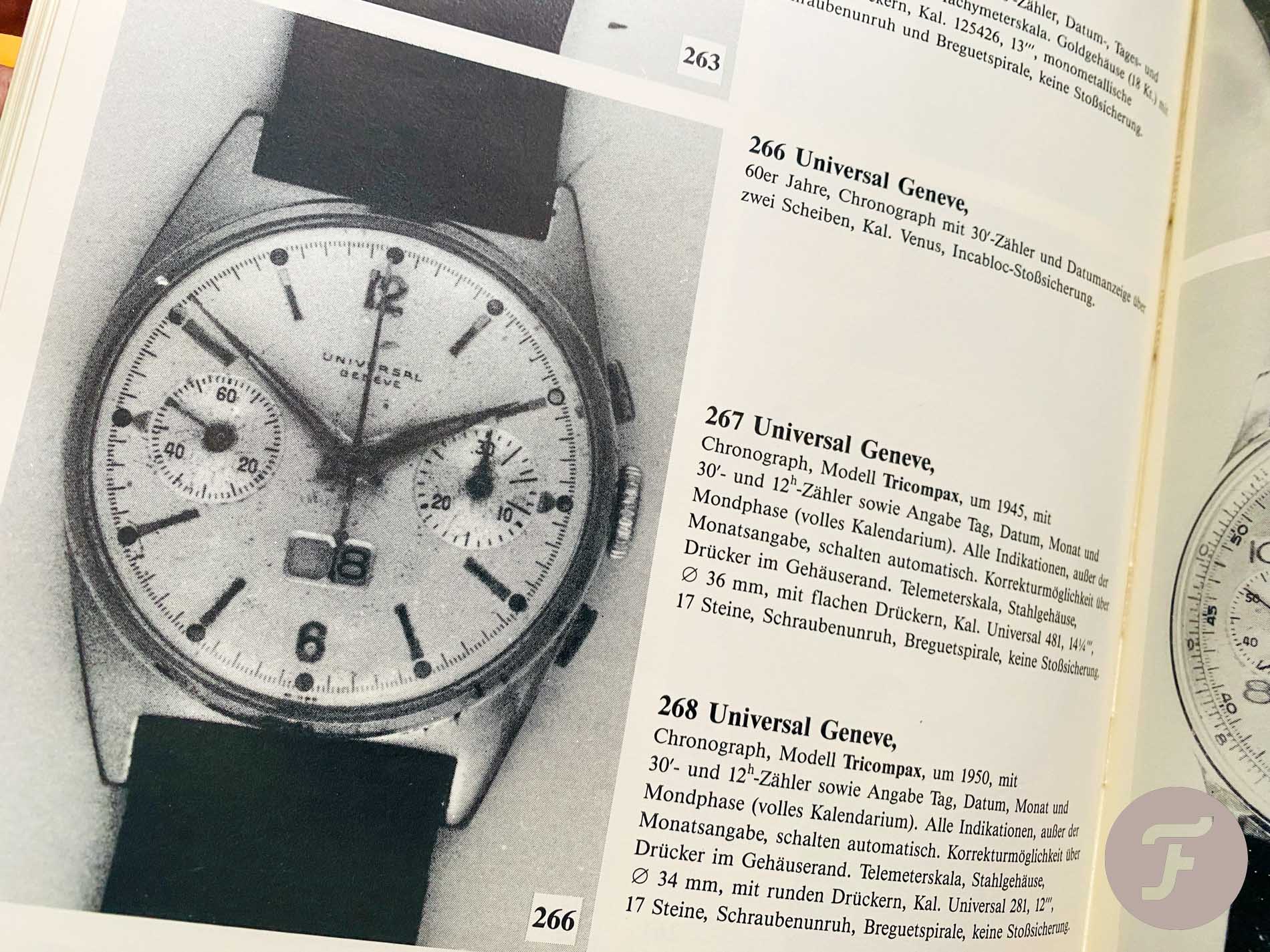 I had a clear memory of the Universal Genève Big Date Venus 211, whose originality I was not sure of either. As I couldn’t find a single piece of information on it, I put it into the Franken category. Two years ago, I bought an old Austrian book about chronographs printed in 1988, and I found it there again. I started to believe it might actually be legit.

After another Gallet Big Date case resurfaced, I decided to go through all the old print ads that I could lay my hands on. It was on eBay that I found a Gallet product on a clipping from the 1958 Joseph Hagn Wholesale Merchandise Catalog. The printing quality is as low as you would expect from a cheap, 400-page, black-and-white catalog with 9–15 watches on a single page. My trained eye instantly recognized a watch in the upper-left corner.

I find the watch title pretty amusing. They didn’t have (or at least they didn’t use) fancy words for it like we use today. This means that they didn’t call it the “Big Date Chronograph” but rather, the “Calendar Chronograph With Date Window.” As Gallet was just a seller, not a watch manufacturer, the brand didn’t have its own movements. 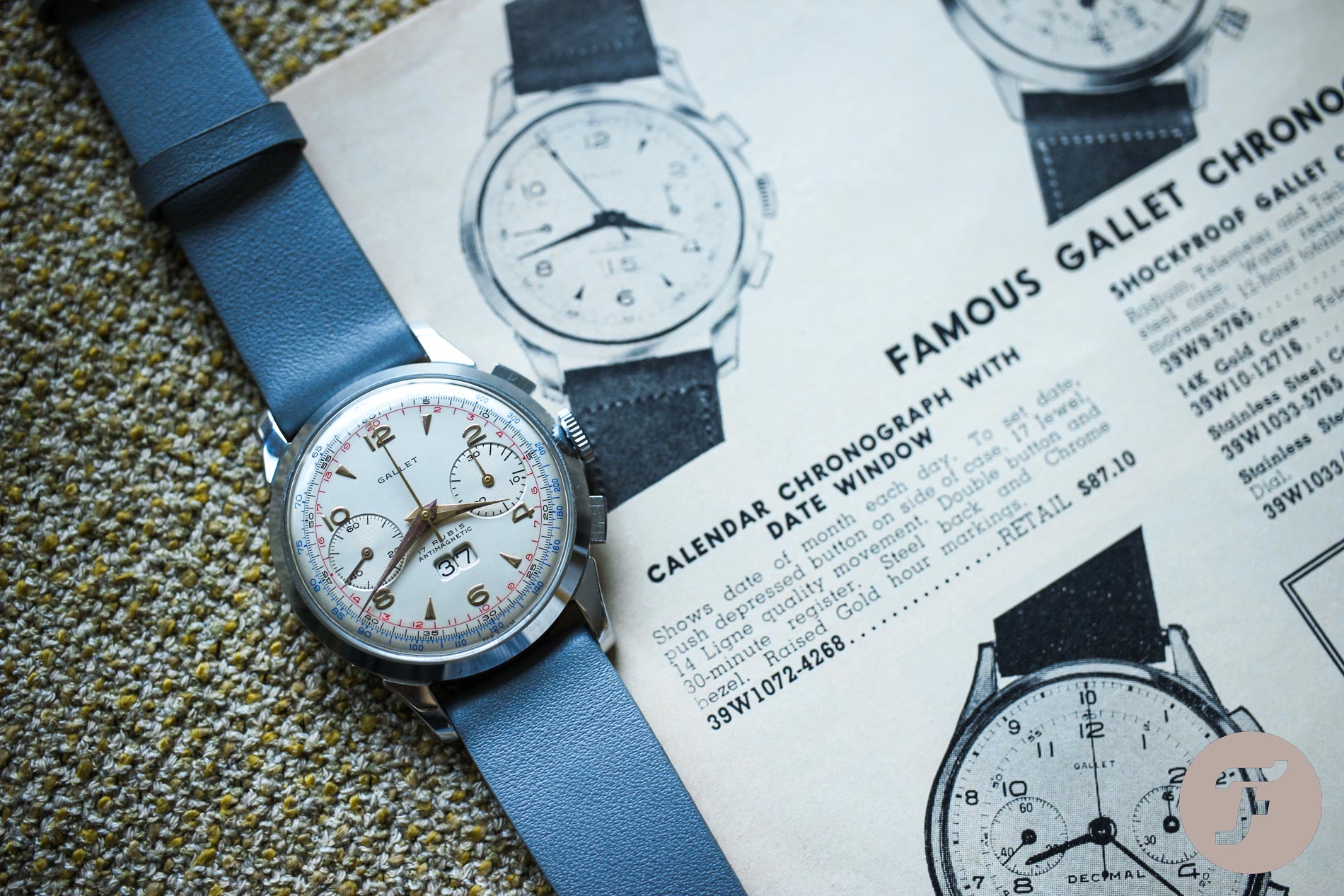 The brand’s “Golden Age” chronograph portfolio is heavy on Excelsior Park movements, so to see a Venus-powered Gallet chronograph is pretty refreshing news. It obviously isn’t stated in the watch description, but it’s clearly a Venus movement. It’s identical to other Venus 211 dials branded Cristal, Bucherer, Philippe, Devina, Herma, Claude Meylan, Nivrel, Tollet, Unic, Agir, or whatever else you can find.

The next day, I bought an original NOS Gallet Big Date chronograph case that I knew of. A Spanish dealer had it listed on his site for quite some time. No one wanted it, and I was hesitant too. The €750 price tag was slightly scary. Well, if you remember that I passed on the same one for $60 a few years back, you can imagine where my hesitance was coming from. 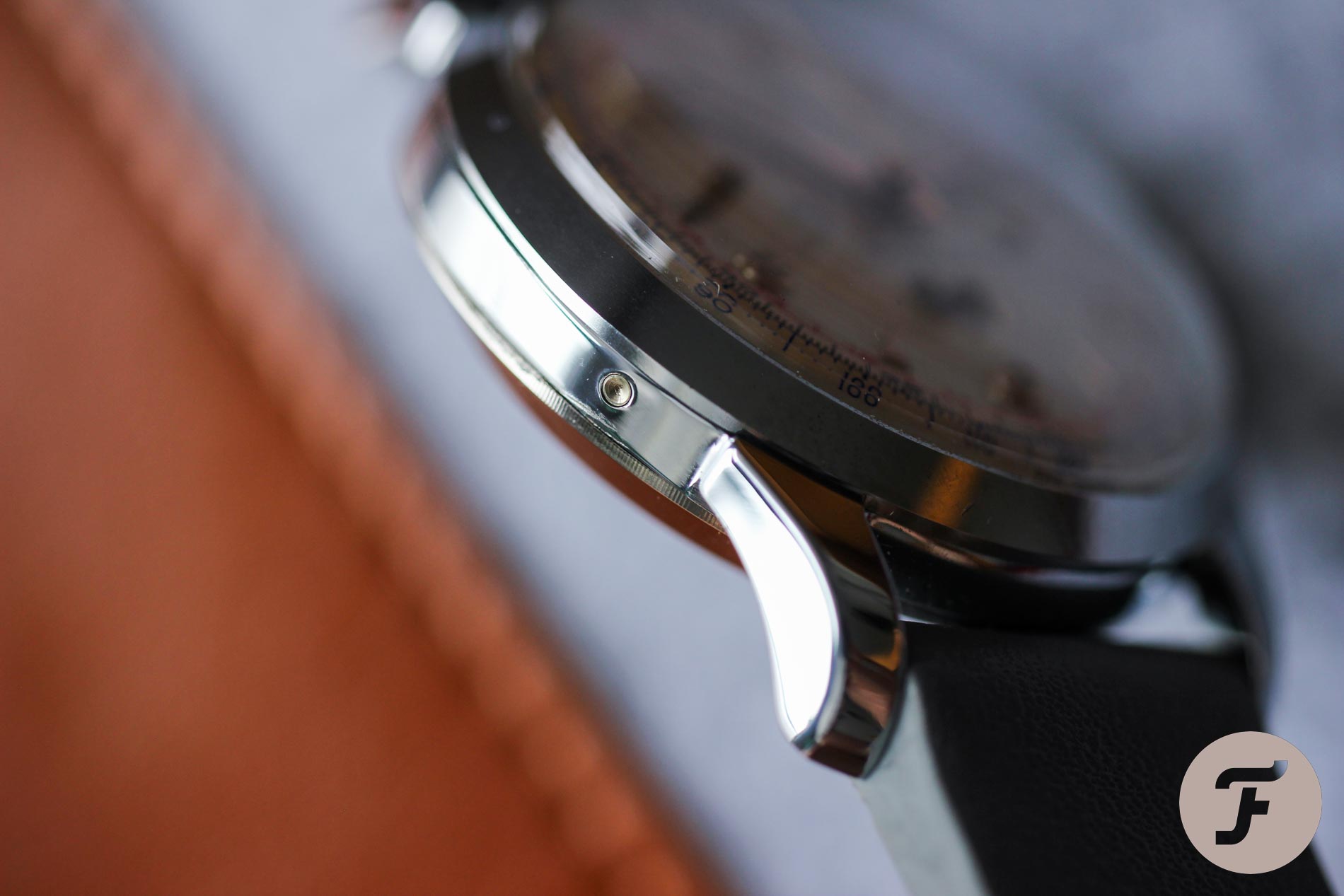 On the bright side of this purchase, the case came complete. It included the case back, dial, original pushers, and crown. Sourcing these separately could be a real pain. This way, everything is perfectly consistent and showed the same level of wear. Well, in this case, no level of wear. After I secured the case, I faced the delicate challenge of finding the movement and the right handset. 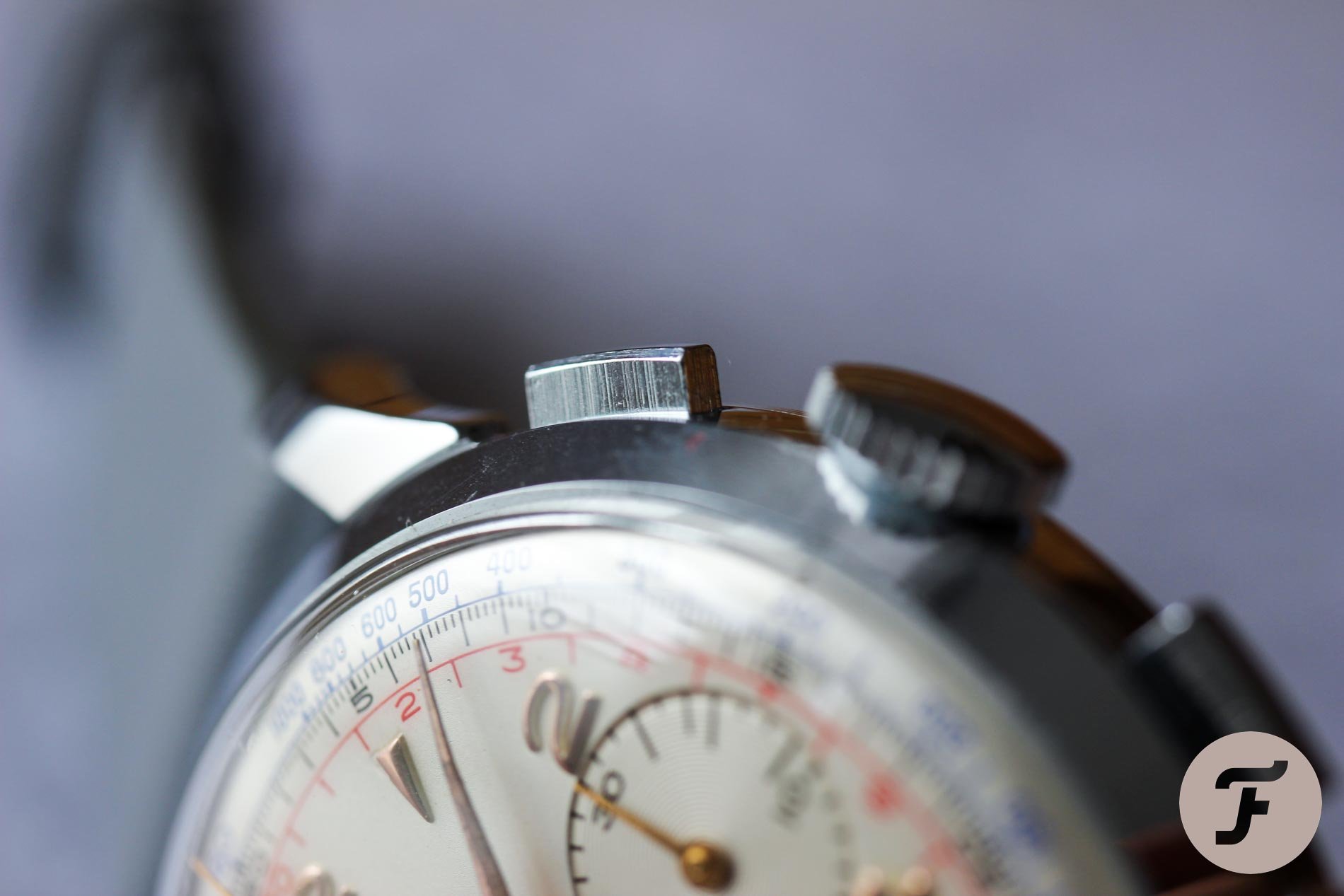 The hunt for the hands and movement

Finding the right donor watch is often quite a painful task. I already had my Bucherer Big Date, but I am not the kind of guy that would just disembowel and sacrifice a fully functional watch just to make another rarer or more valuable watch. So again, I set all the auction alerts possible and waited. I hoped for the right donor watch to resurface sooner or later.

I bought the case around November 2021. For the next year, not only did I not find any donor movements but I also didn’t even find any complete Venus 211 Big Date Chronographs. I had already come to terms with the fact that it would take several years to finish my Gallet. 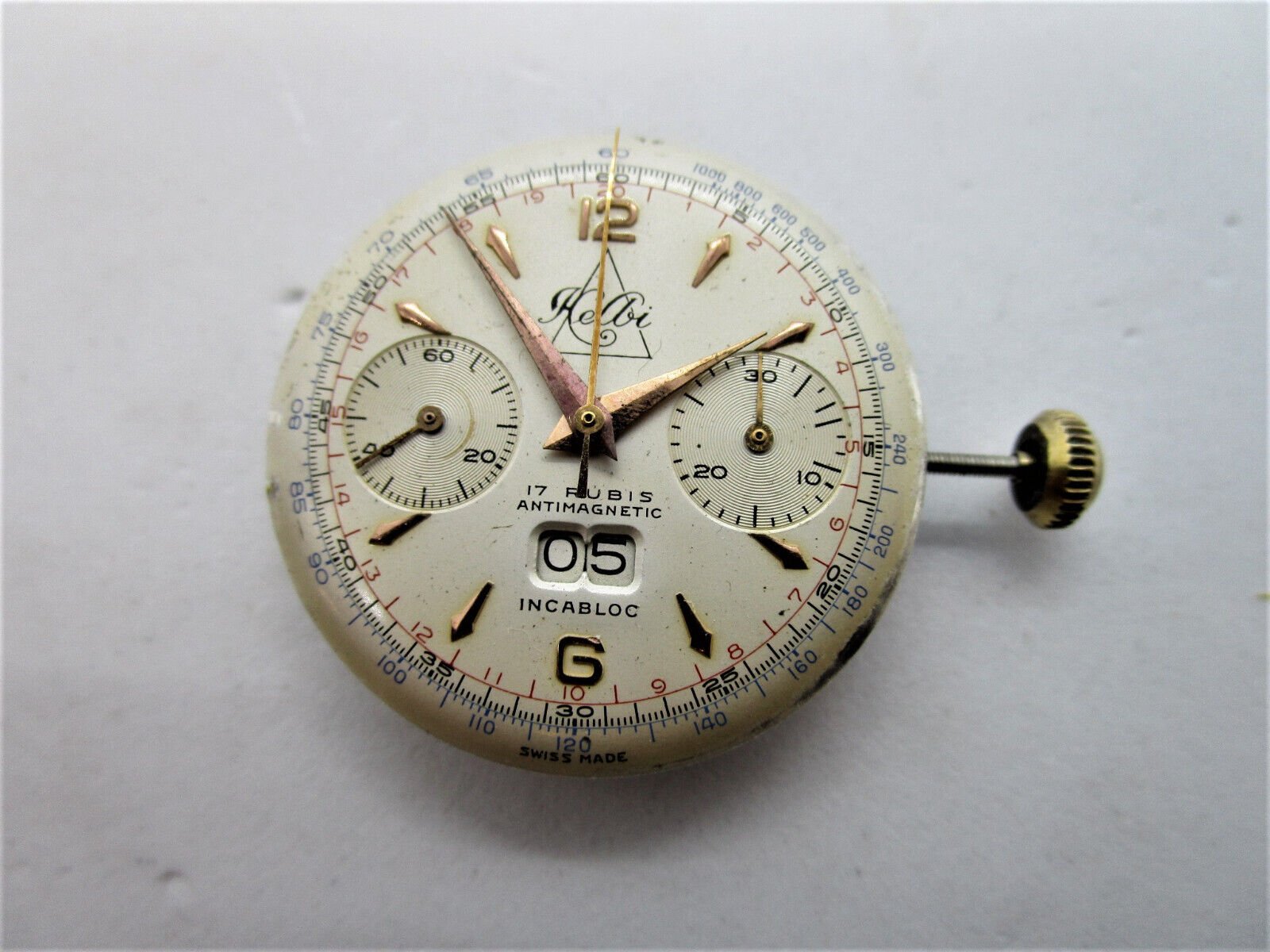 My six-month-old son likes to wake up around 4:00 AM just to make sure his parents are still around. We are. The problem is that I struggle to fall asleep again. With not much to do, I opened eBay and typed “211 Venus” into the search bar. I could not believe what popped up in front of my eyes. It was not an entire watch but just a movement with a dial and a complete set of hands — the hands that I needed for my Gallet! There was not only a Buy It Now option but also an option to make an offer. I didn’t play the cheap-bastard game, trying to settle on a better price. Yes, I was fully aware that I could be left waiting for another few years. I thought for a while and concluded that this is already a “listing made in heaven.” I scored the Kelbi watch torso for under €600.

Thoughts on the hands

There is one other Gallet Big Date chronograph listed and still available here. It has been sitting there for quite a while, actually. The €5,000 price tag is staggering, especially considering it has the wrong handset. It has to take someone with a lot of creative spirit or lazy ignorance to put those baroque hands in the sub-registers. The central handset is also wrong, in my opinion. The hands are too shaped; they should have clean lines. Not to mention, the minute hand is too long. 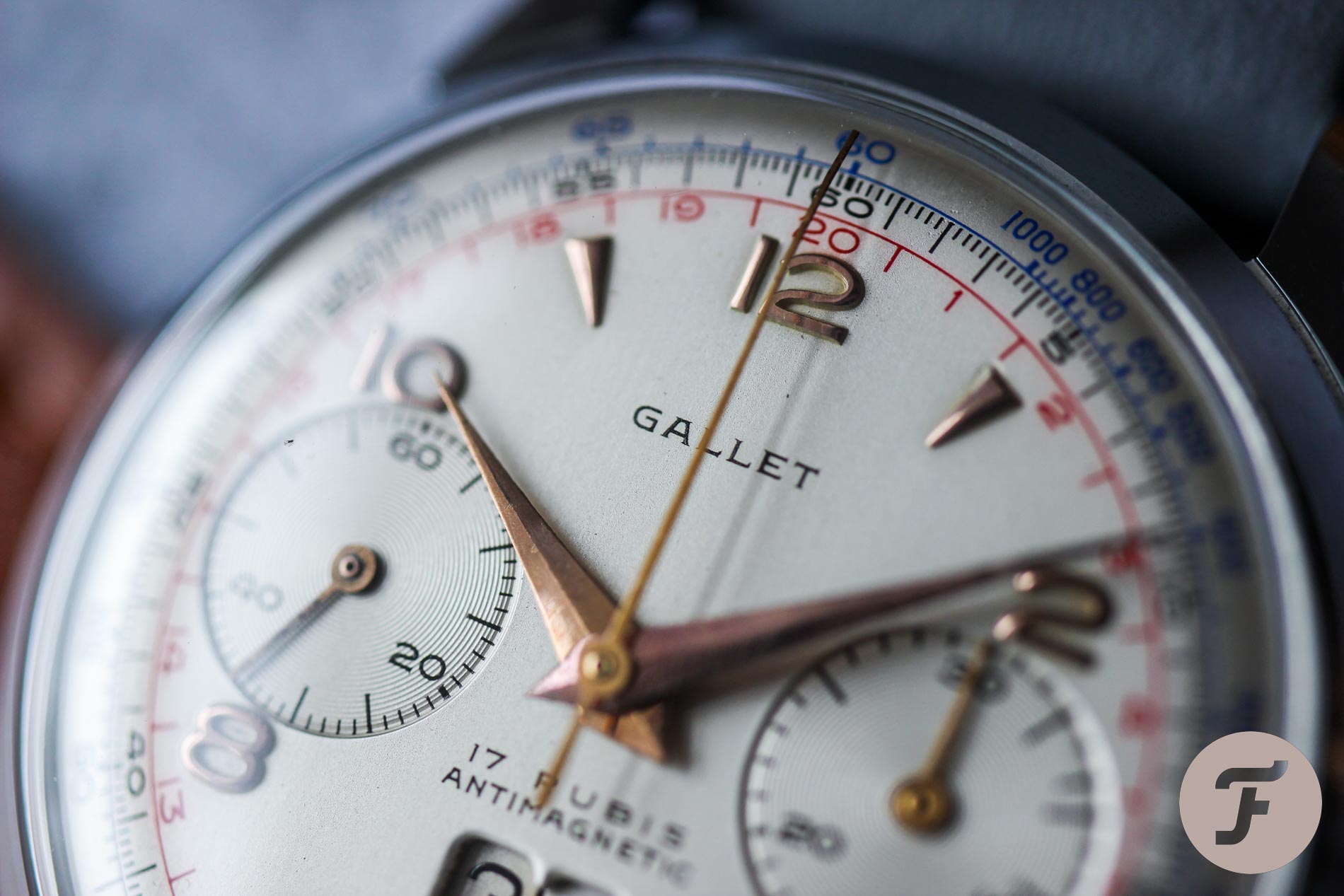 That brings us to the hands that I put on my Gallet Big Date. I cannot say with 100% certainty that I installed the right hands as we don’t have much to compare them to. The length, however, seems to be about right. The hands from the catalog seem to be slightly thinner, but it might be a result of the low printing quality. The ones I used are definitely from other Venus 211 chronographs and seem about right. I will investigate again if more Gallet Big Date chronographs appear over the next years. But will they? 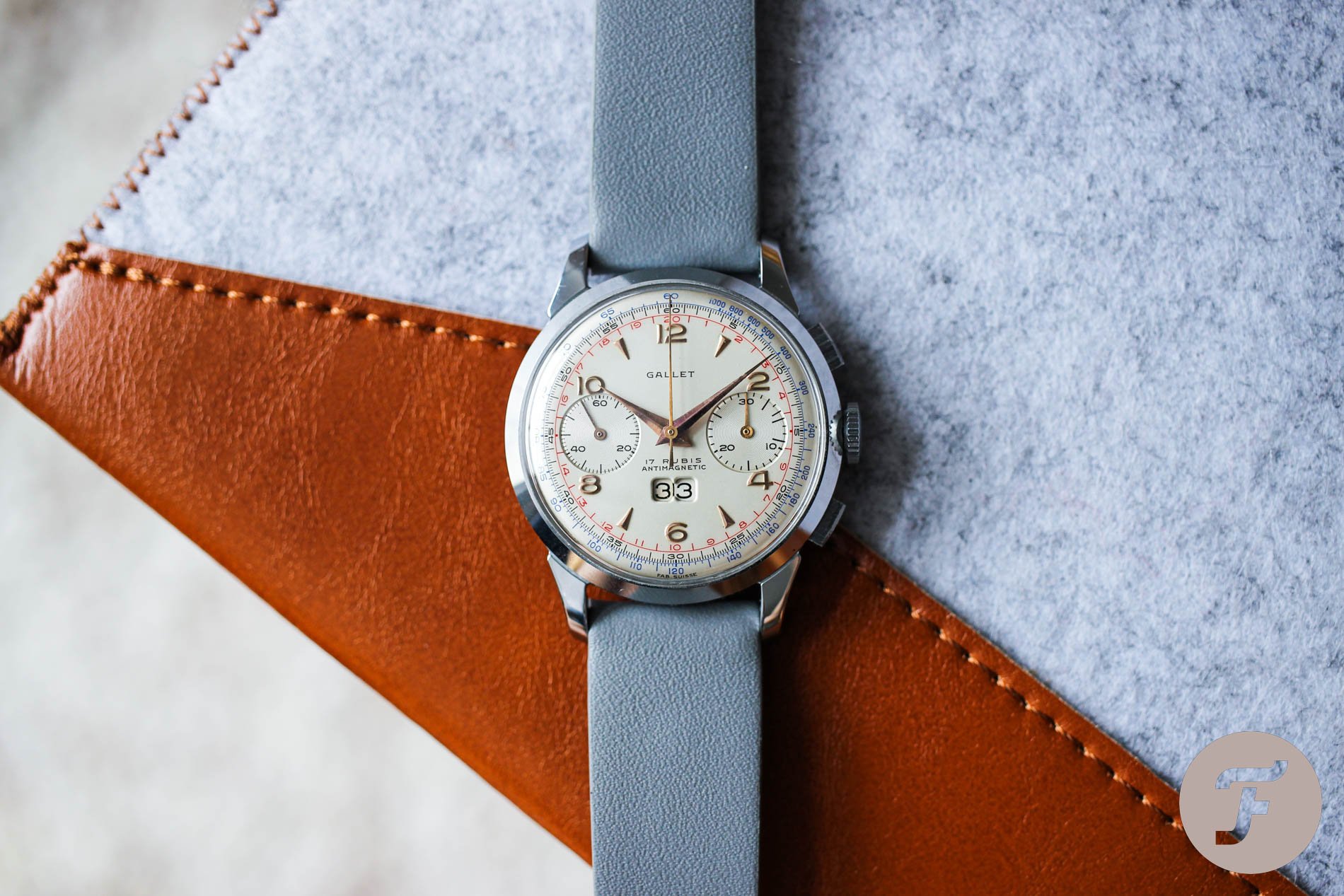 The mystery goes on

The two other examples that I know of are both watch restorations and projects. Well, I have no doubts about my example because it has no history. I recreated the watch with a NOS dial and case and fully documented the rest of the process. I don’t know much about the other example from Craft & Tailored, but I would surely bet my entire Gallet collection that it’s a recreation like mine, just with a slightly less satisfying result. Although the listing suggests it’s an all-original piece… 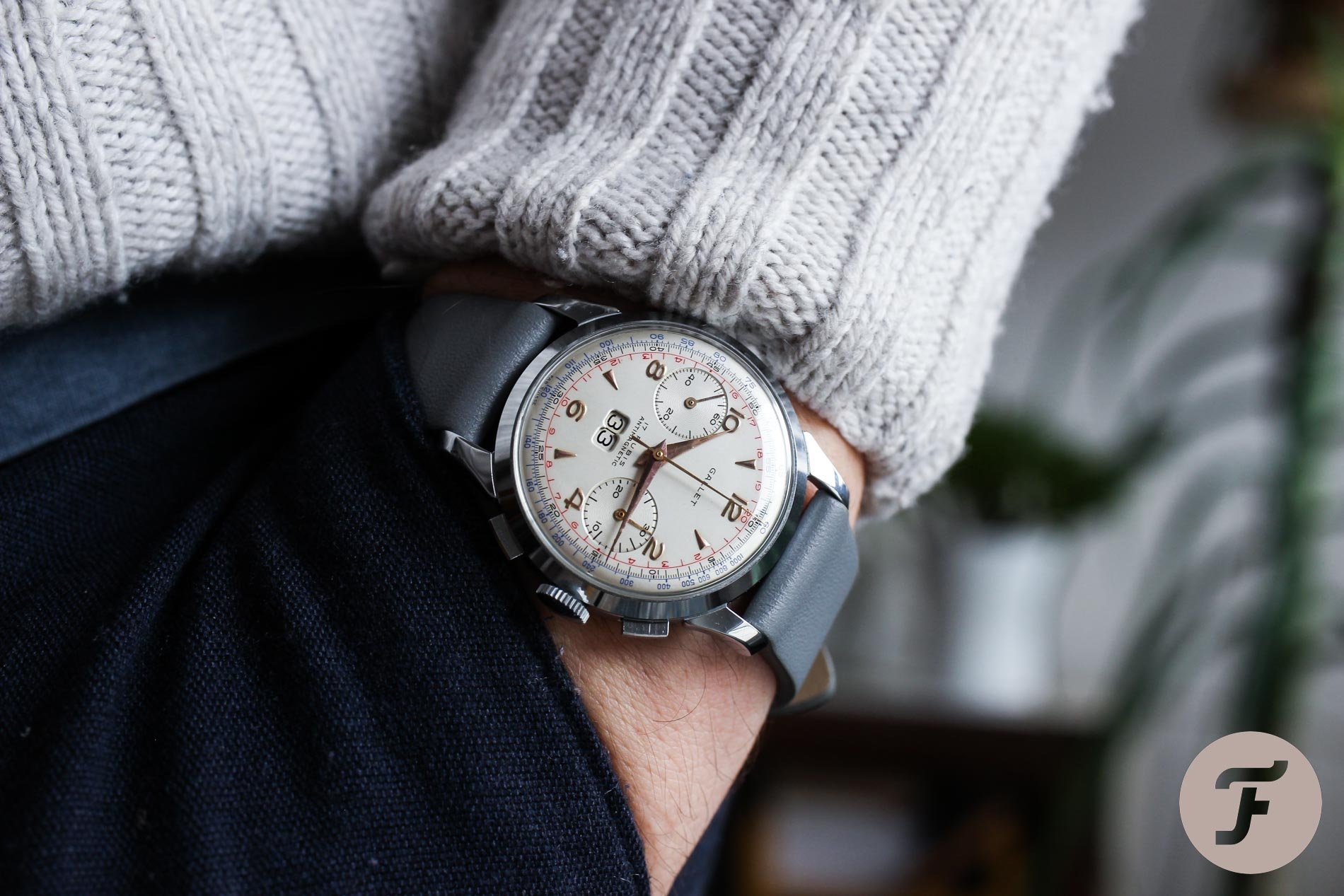 That brings us to the question: why haven’t we seen any legit, factory-correct Gallet Big Date chronographs, even just one? When I asked David Laurence from Gallet if the brand has any records on it, he said that he saw this model in the company’s collection. Unfortunately, he didn’t send me any pictures. We shall see if the book on Gallet history, which has now been delayed for years, might shed some light on the topic (if it ever gets published…). The fact is, the Big Date Chronograph isn’t even listed on Galletworld.com, which is a pretty complex showcase of Gallet’s vintage watches.

Back to my Big Date

The Kelbi donor movement and handset arrived on December 30th. I didn’t unbox the package and rushed straight to Tomas, my trusted watchmaker. On the next day, the last day of the year, he called me to say that my Gallet watch was ready to be picked up. I could not believe that Tomas made it for me overnight! I know his bench is full, so I left it there without asking him to do it as soon as he could. Well, it seems that he is just as much of a watch nerd as me. He was so excited to bring the Gallet Big Date back to life that he jumped on it straight away. 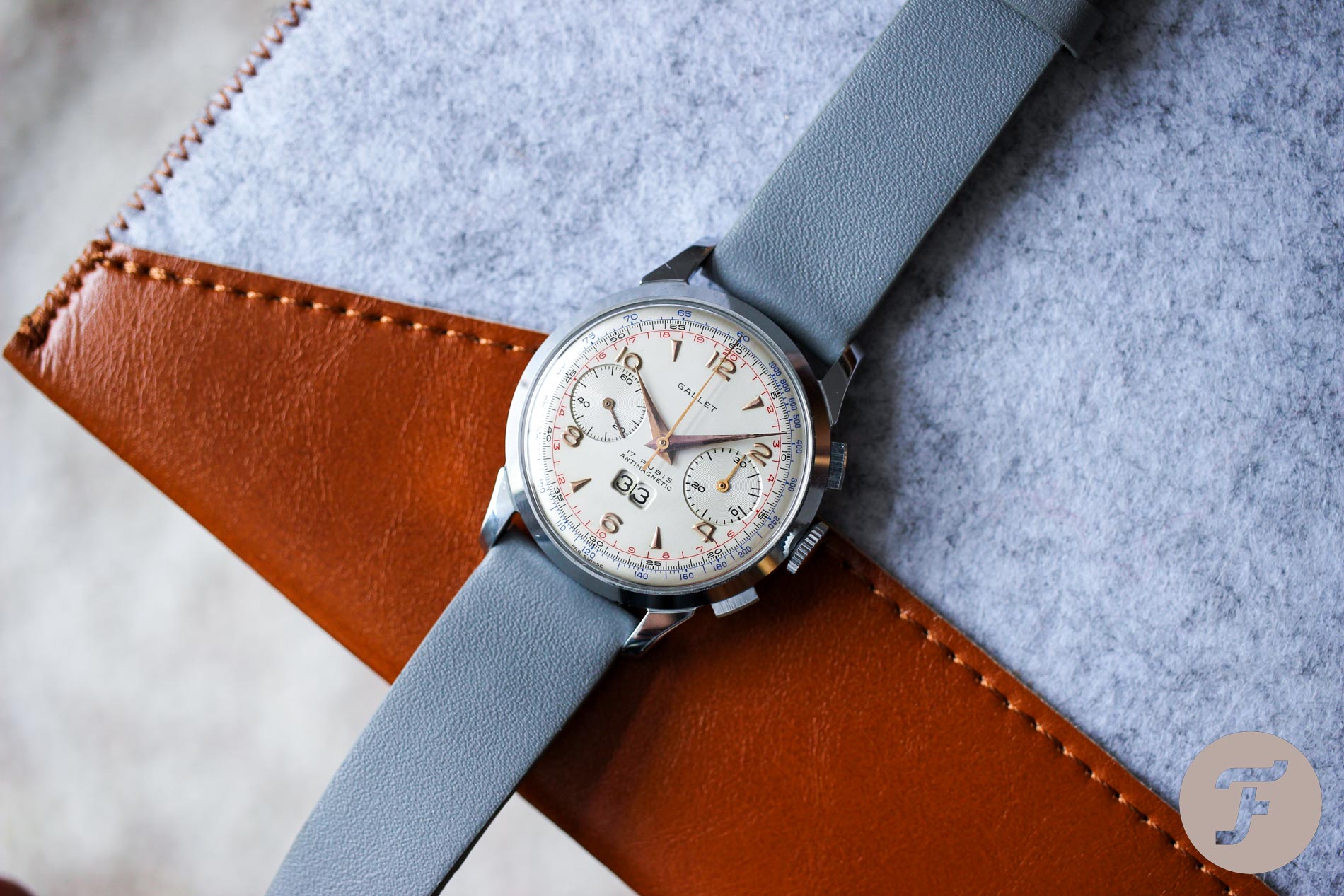 When I came to pick it up, I realized that I had forgotten to bring a strap with me. For such a special watch, I would think twice about what strap to use. I was just so excited and everything happened so fast that I simply forgot. Tomas reached into his secret stock and pulled out a flat pale gray leather strap. Initially, it looked very strange to me, but as I was heading out of town for nine days, I had to live with what he gave me. After some time, I found the pale gray strap amusingly awkward and pretty unusual. It highlights its originality. The strap color and material have such an unusual vintage vibe. It looks like it has been around for 50 years at least. Upon arriving home, I decided to leave the strap as it was. Ah, the beauty of the unexpected. 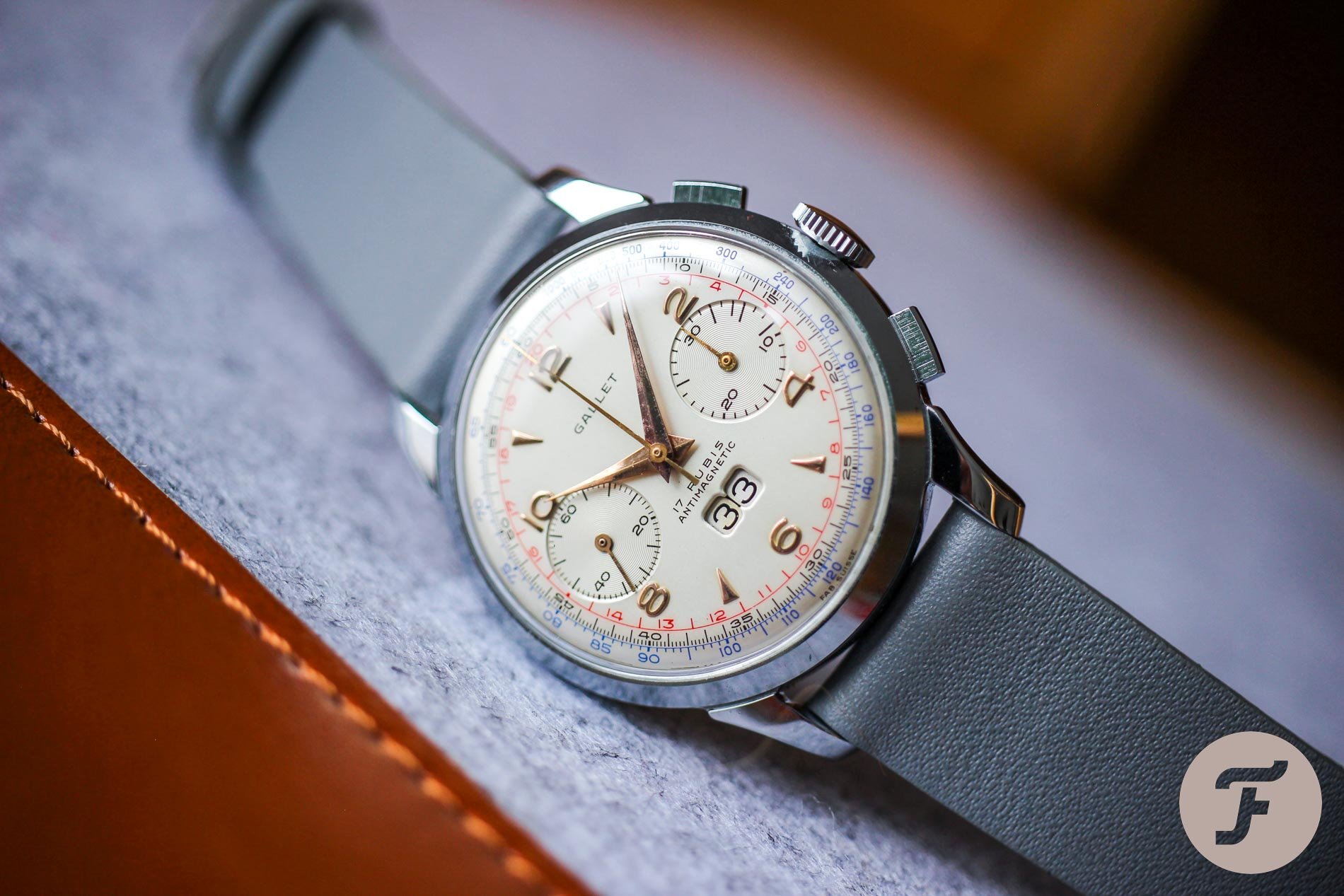 At 36mm, the Gallet Big Date wears perfectly. The more I look at the dial, the more I find it perfectly balanced. The applied rose gold indexes are placed alternately with Arabic numerals, and two sub-registers sit perfectly in between. The shape of the big-date window created for two date discs rotating against each other is phenomenal. It’s one of the best dial apertures that I have ever seen on a vintage watch.

The double-disc date came first in 1948 with the Angelus Chrono-Datoluxe with a 252 caliber. The date discs were arranged concentrically, and the date was maybe one-fourth of the size of the Venus 211. According to Sébastian Chaulmontet, the Venus 211 went into production around 1953 and lasted till 1963. The world’s first chronograph with a single-disc date display came with the Eberhard Contodat in 1957. We can rightly call the Venus 211 the first true big-date movement. It took another four decades for A. Lange & Söhne to put two layered discs together in 1994 with the Lange Outsize Date Mechanism.

As I wrote back in 2019, “What watch purists might refer to as the biggest imperfection or defect of the Venus 211 big date is what amuses me the most. This movement counts the date from 0 to 39 instead of 1 to 31, so you have to correct it at the start of every month. Not often does an engineering imperfection make a perfect talking point.” You can use a tiny pin on the side of the case to advance it. I suggest you use a toothpick instead of a spring-bar tool. A toothpick (or something like it) is softer and won’t leave scratches on the case if you don’t hit the pin precisely. 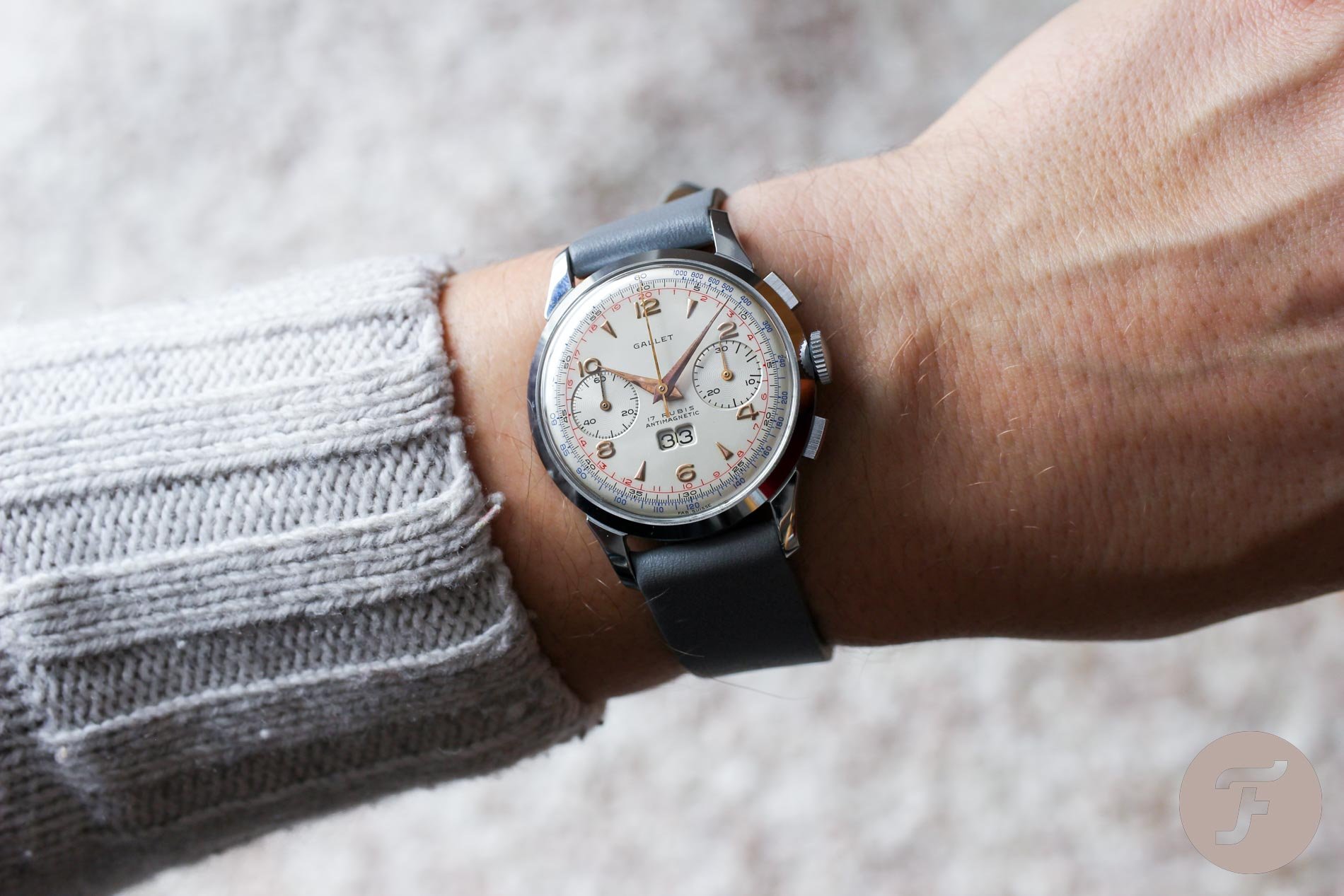 Getting my Gallet Big Date completed on December 31st was magical. And it nicely fits with my 2023 watch resolutions to focus more on Gallet, which I shared with you last week. While all my standard watches skipped to January 1st, my Venus 211 showing December 32nd kept me in 2022 in a way.

I love imperfections because they are so human. We often don’t choose complicated ways to do things. They just turn out that way, and we can often only see them in retrospect. Sure, the Venus 211 doesn’t have the most convenient or smartest big-date system, but I bet it’s the most amusing and most interactive. And to have it now in an extremely rare Gallet Big Date chronograph that many collectors didn’t know of makes this watch one of my most treasured timepieces. Happy hunting.