A watch from the '80s makes a welcome return...
Robert-Jan Broer
comments 7
Share

You might not have heard of watchmaker Jacques Bianchi from Marseille before. Bianchi has a workshop that faces the Old Port (Vieux Port) in Marseille, France. It is in this workshop, where Bianchi worked on numerous watches. Including those of Cousteau, Mayol, and a bunch of COMEX divers. The JB200 we have for you here today on Fratello is not something new or “invented”. No, Bianchi has solid experience when it comes to creating watches that stretches back nearly 40 years.

Back in 1982, Bianchi designed and produced the JB200 diver’s watch. And that was no biggie for him either. Bianchi had proper experience with water-resistant watches, dealing with Sea-Dwellers, Submariners from COMEX divers as an authorized Rolex watchmaker since 1974. Around the same time, he became a distributor for the famous Aquastar watches. If that’s not convincing enough, he also made some prototype watches for the apneist Jacques Mayol. 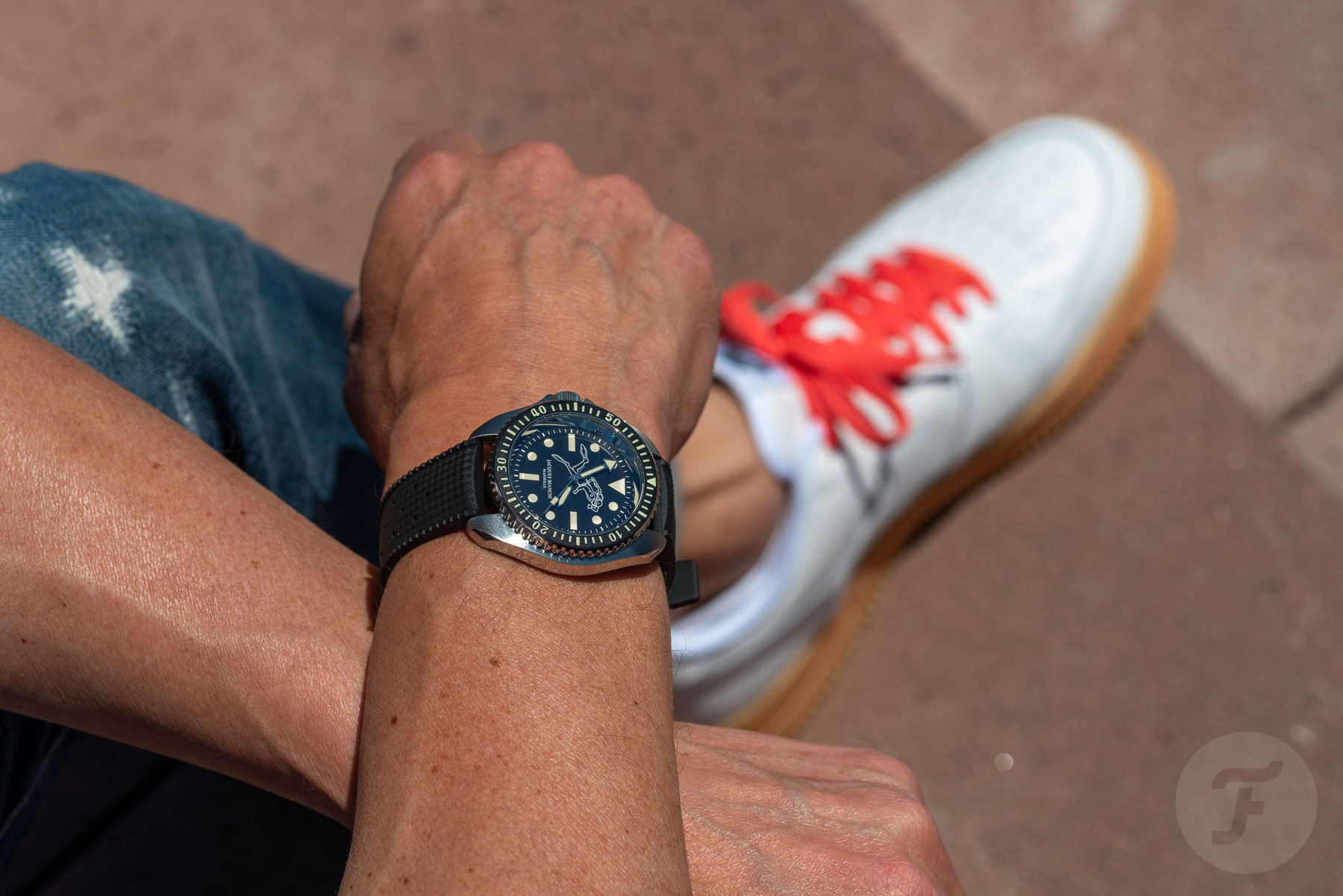 The original JB200 might have escaped your attention. Perhaps because it was a quartz watch, but also because there were only a few pieces produced. It was a serious diver’s watch though, with a water resistance of 200 meters, a diver scale bezel, “destro” (crown on the left), and a rubber strap. Inside was a caliber FE 7121. That was a quartz movement developed by French Ebauche. This 42mm JB200 from 1982 was later (in the late 1980s) ordered by the French Navy and Bianchi supplied them with 60 pieces. The most noticeable thing about this watch is, of course, the outline of the diver on the dial. Too quirky for some, to others it is a fun detail. I belong to the second category. 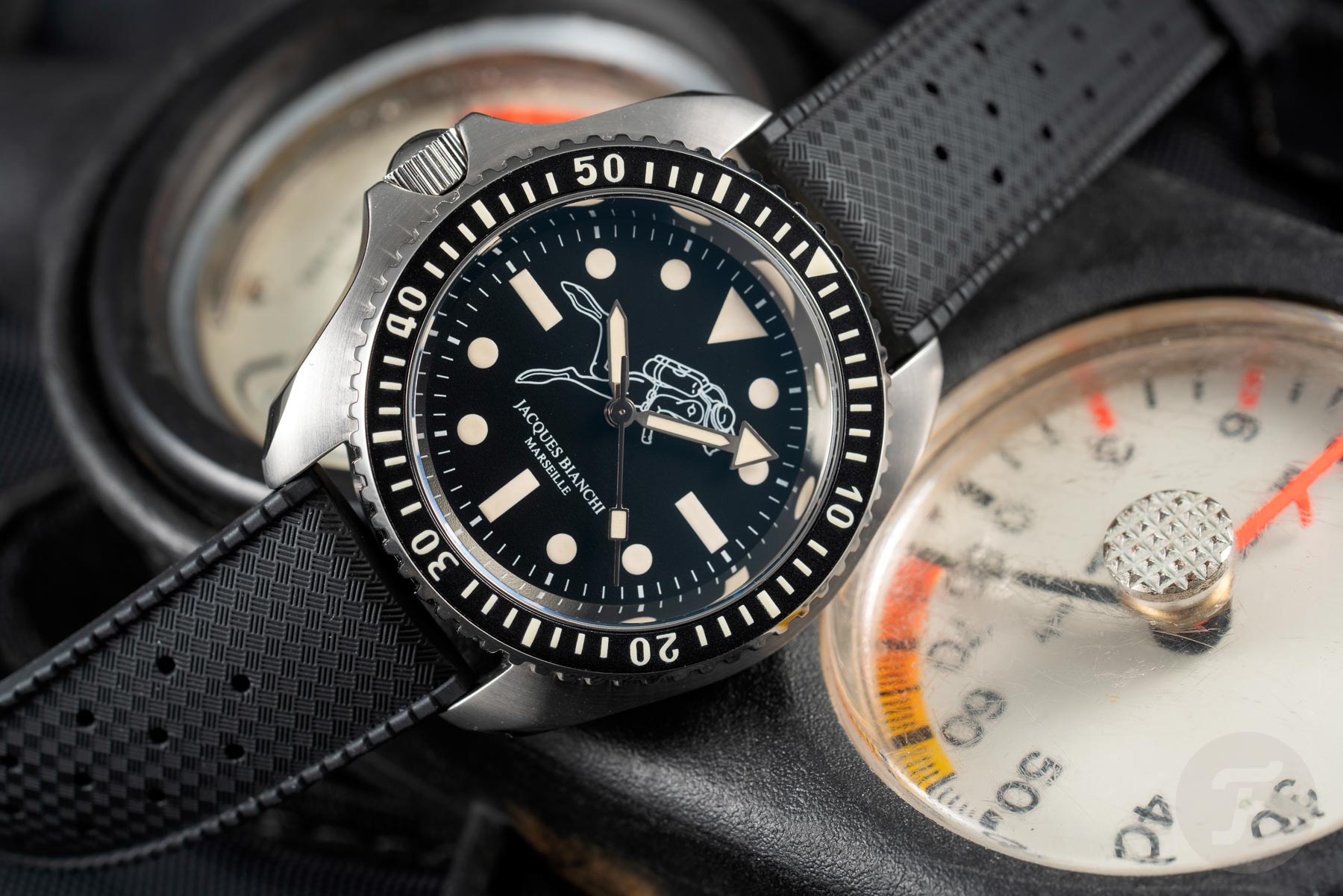 Anyway, the JB200 is back, and this time it has been fitted with a mechanical movement to please all the enthusiasts out there. Together with watch industry vet Fabrice Pougez and digital marketing expert Simo Tber, the 80-year-old Jacques Bianchi decided to reproduce the JB200 and honor the original design. The JB200 is still the steel 42mm diver it was in 1982, but with a Seiko NH35 movement, lacking a date (the original had one) and using Super-LumiNova. What remained is the “destro” case, 200 meters of water resistance, and the black rubber strap. And last not but least, the silhouette of the diver on the dial. 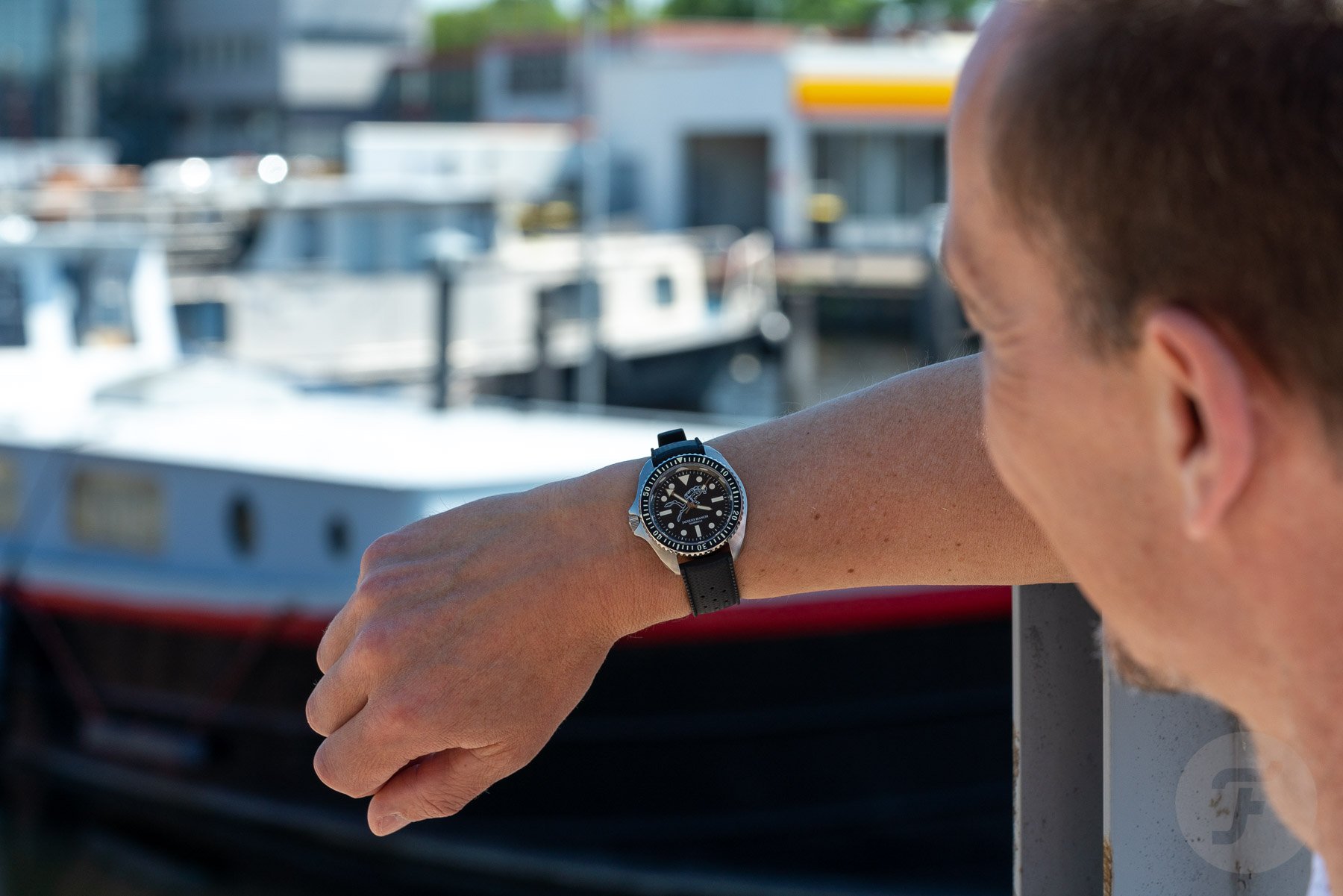 Sometimes it sounds a bit like a dirty word, “storytelling”, but it is the one thing that separates most watches from one another. And for many, the thing that makes one watch more interesting than the other is the reasoning beyond it, the human emotions and endeavor that went into its creation, and why it deserves attention in such a crowded marketplace.

When reading the backstory on the JB200 dive watch on the official Jacques Bianchi website, it speaks to my imagination. A workshop in the port of Marseilles in the 1970s, where professional divers knocked on the door to hand over their Submariner or Sea-Dweller watch to have it repaired or regulated. An experienced watchmaker that turns his knowledge into an actual product, which gets then ordered by the French Navy for use at the naval airbase of Saint-Raphaël. 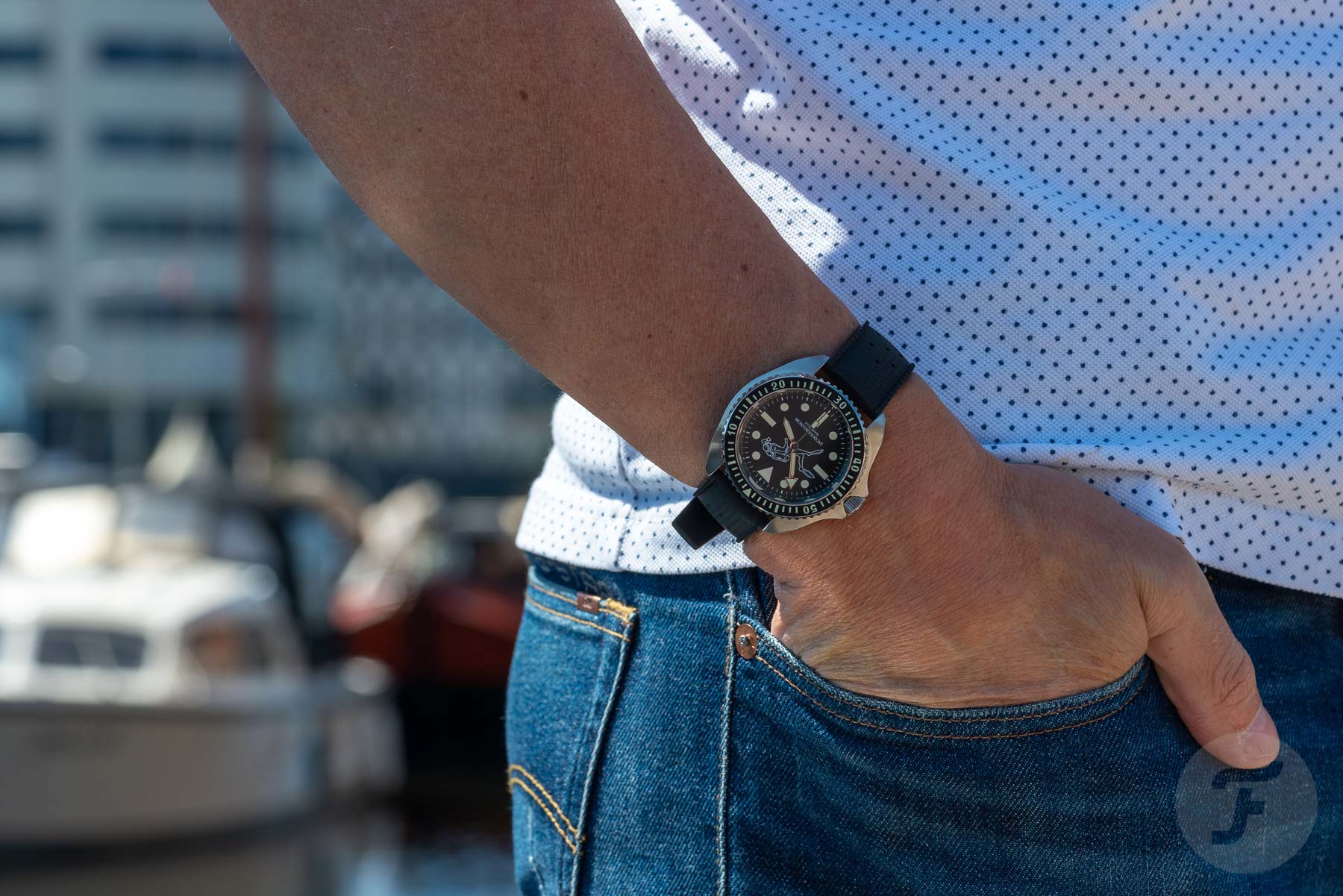 These kinds of stories turn this JB200 dive watch into a proper conversation starter with other watch enthusiasts. And Bianchi and his team know this, of course. So well played, well played. It sounds like the story is more important than the watch, and perhaps it is, but that doesn’t mean the Jacques Bianchi JB200 isn’t worth further investigation. The specifications are already clarified to some extent, but let’s have a closer look at the watch itself. The team of Bianchi was good enough to send us a watch prior to its release, and I’ve had the opportunity to play with it a little over the past few days. 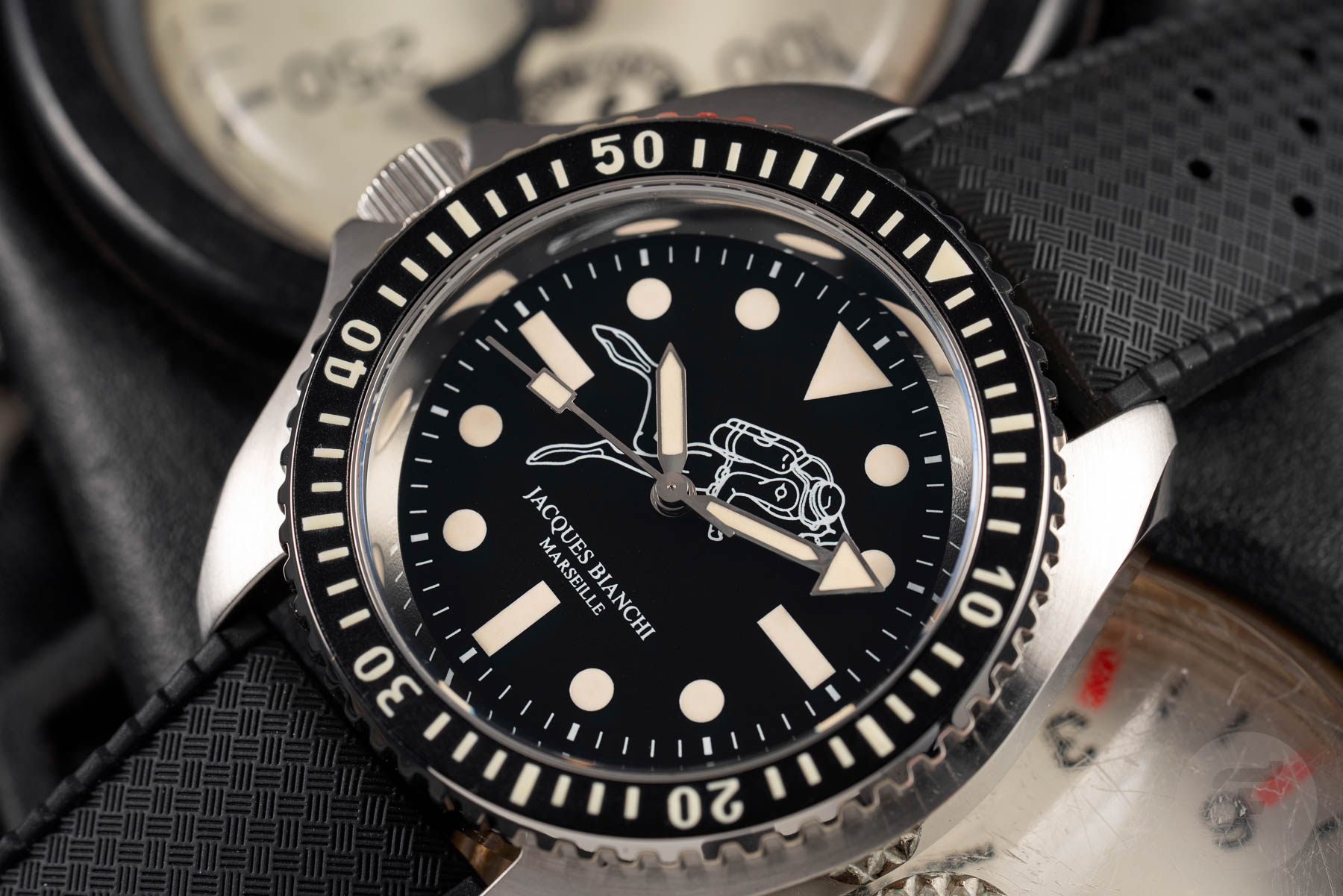 The 42mm case has a thickness of 13.3mm and although that’s not something small, I don’t have the feeling I am wearing a big watch. The odd case shape might also have something to do with this. Last but not least, the fact that the crown is on the left side makes it a very comfortable diver to wear. If you follow me on Instagram, you will notice the little mark I have on the top of my hands, caused by crowns. And I am not even wearing my watches too loose. As long as you wear the Jacques Bianchi JB200 on your left wrist, you will enjoy the same. The black tropic style rubber strap makes it a very pleasant watch to wear — a good choice for a diver’s watch as well. 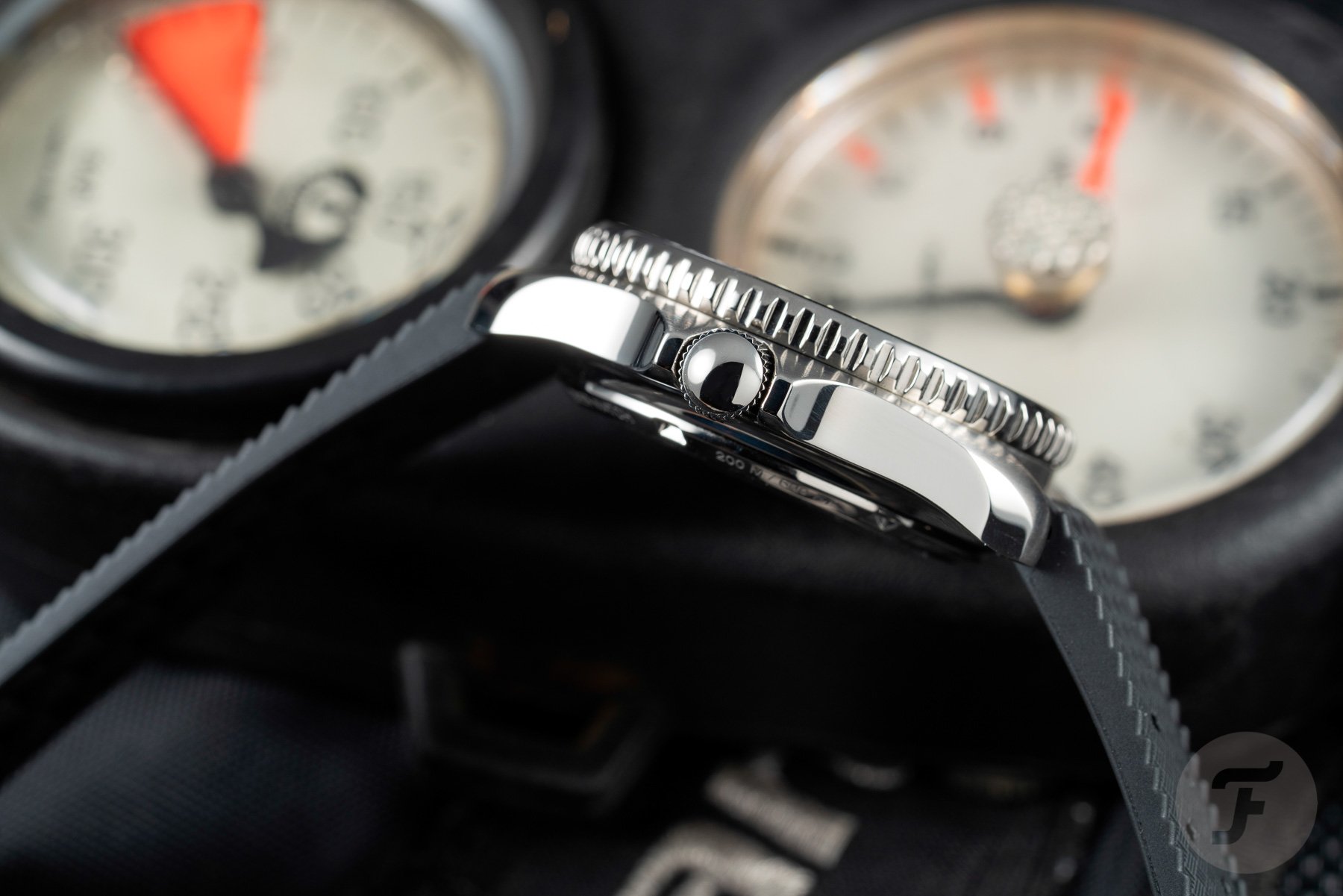 The unidirectional bezel is easy to grasp and rotates in 60 clicks. Just like the dial, the bezel has been treated to a generous coating of Super-LumiNova ensuring excellent legibility. What I did notice is that the bezel has a bit of play, but not enough to make me feel worried (and I am quite critical when it comes to these things). Also, I am aware that Jacques Bianchi sent us a prototype, so the final version will probably have less play.

The ultimate assessment of this design’s success will, however, come down to taste. That’s because it has a strong, definite look that requires a bit of character and confidence to wear comfortably. And that’s a good thing. The quality, especially for the Kickstarter price of just €595 is pretty good. One thing I am not particularly fond of is the shiny rehaut. As you can see in the picture below, it reflects a lot. 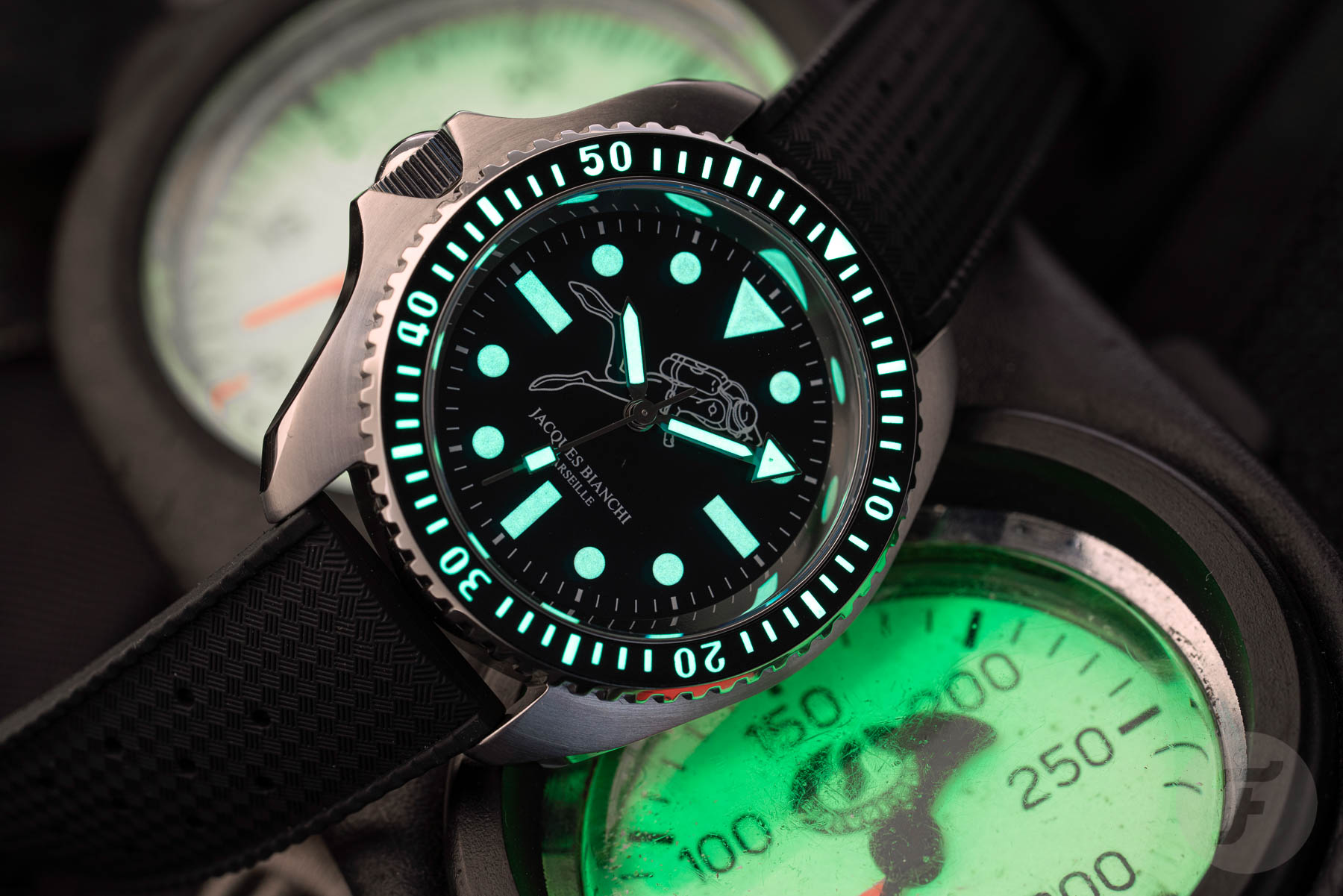 The movement that Jacques Bianchi used for the JB200 is Seiko’s NH35 which offers a power reserve of 41 hours and ticks at 21,600vph. It is a no-nonsense movement, which, if regulated properly, can be a very good timekeeper. 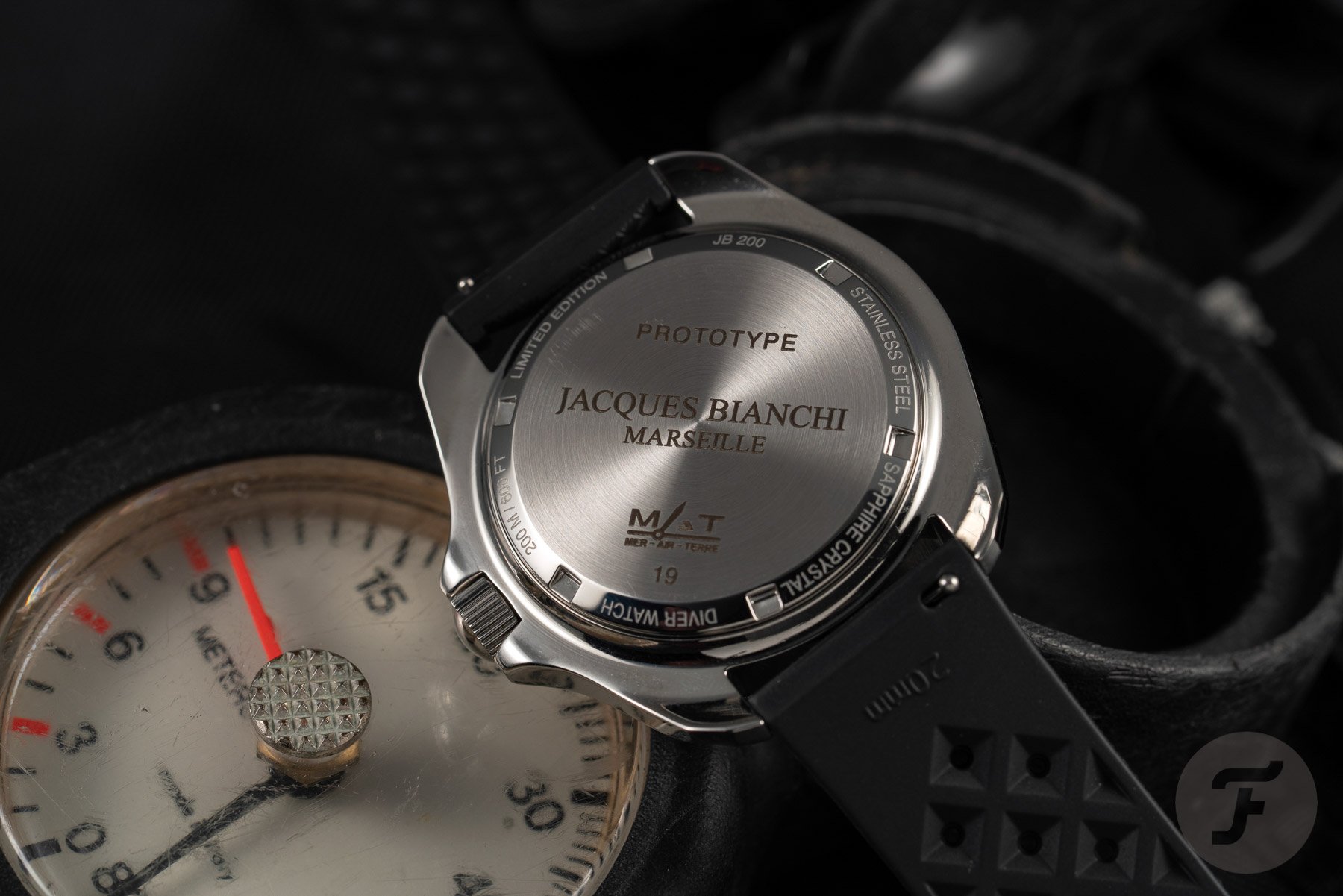 The screw-in case back — just like the screw-down crown — also ensures the water-resistance of the JB200. On the case back you will also find some additional information about your JB200 dive watch. 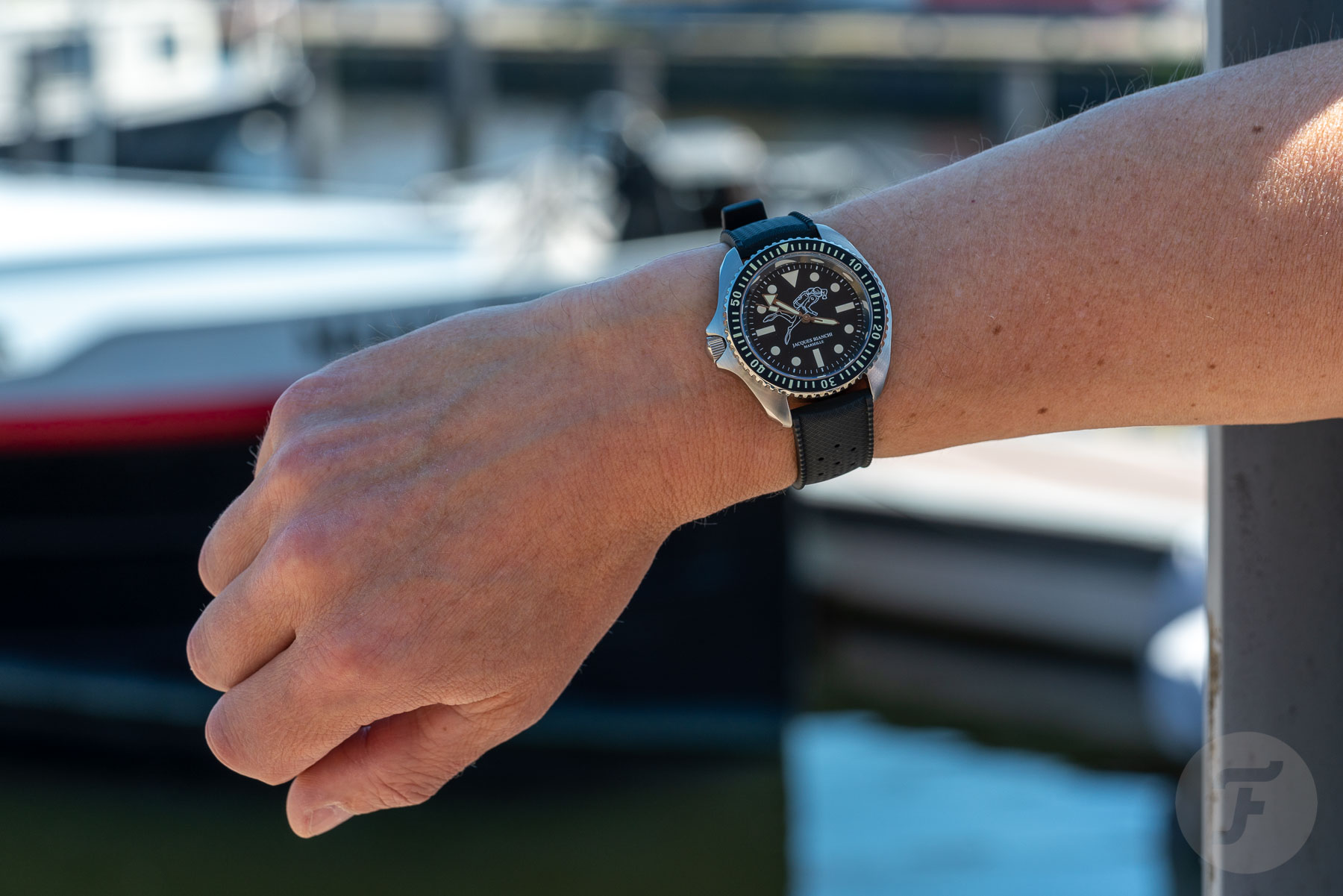 The Jacques Bianchi is not for everyone, but those who love a good story and bang for their buck KS projects, can’t go wrong with this JB200 dive watch. You do need to like the printed silhouette of the diver on the dial though. The ivory color of the hour markers and lume might infuriate the anti-faux-patina brigade, but I do think it looks nice. 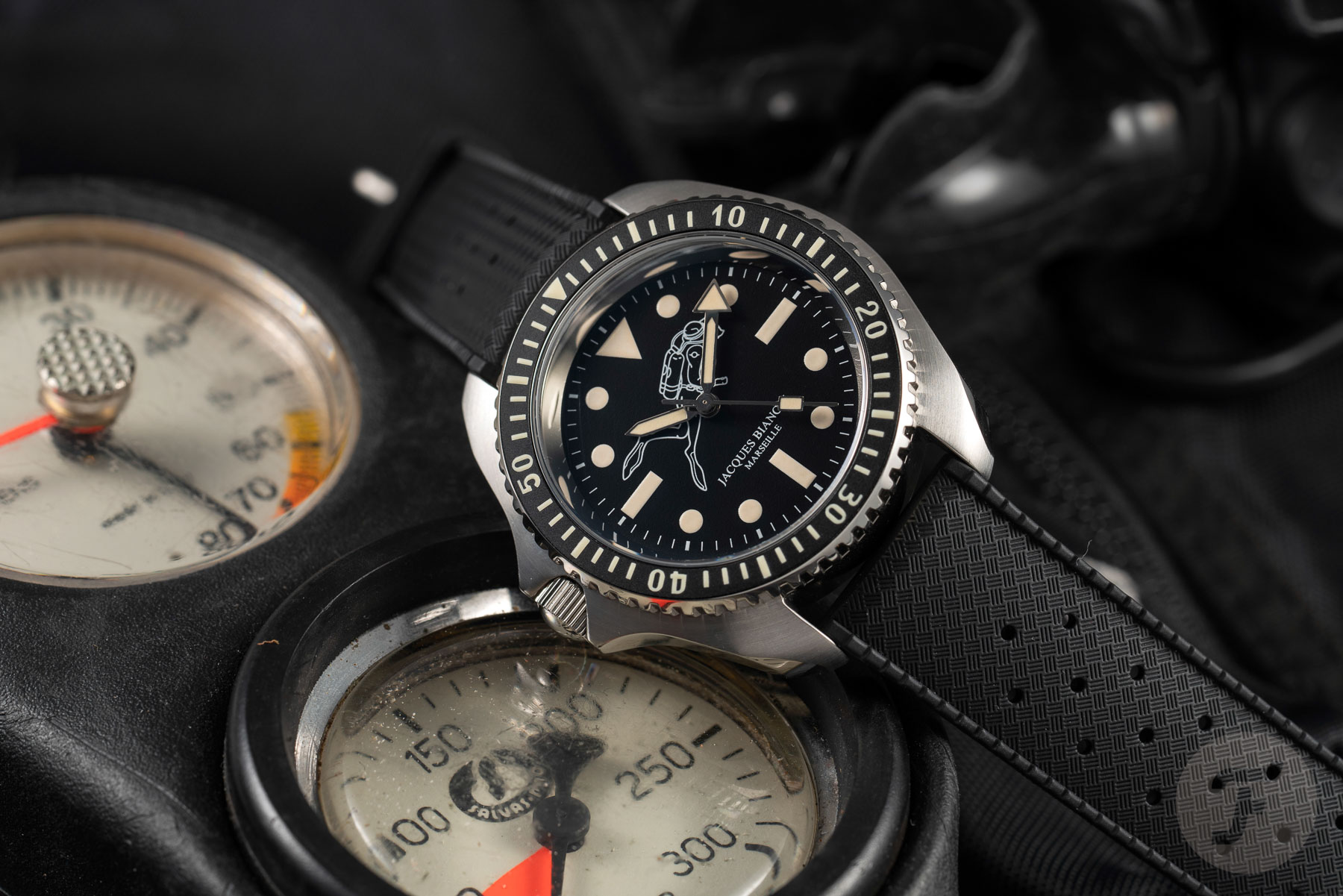 I also would not have minded white printing and Super-LumiNova though, but it suits the character of the JB200 dive watch. What I particularly like is the square lollipop hand on this watch, something which the original 1982 JB200 also featured. More information about the JB200 can be found here. And the Kickstarter project page can be found here, to order yours.