The First Omega With A Date — Seamaster Calendar Reference 2627

The Omega Seamaster Calendar ref. 2627 is such an exciting and historically significant watch. Yet, aside from the hardcore Omega fans, it seems as though it mostly flies under the radar for the average vintage collector. Nevertheless, this 1950s beauty deserves a lot more attention. In this article, we’ll try to give the watch just that.

Reference 2627 is not a huge watch, nor was it made in endless executions. However, the Seamaster Calendar was a technologically advanced piece for its time. So much so that even today, one can wear it proudly and enjoy its useful features. 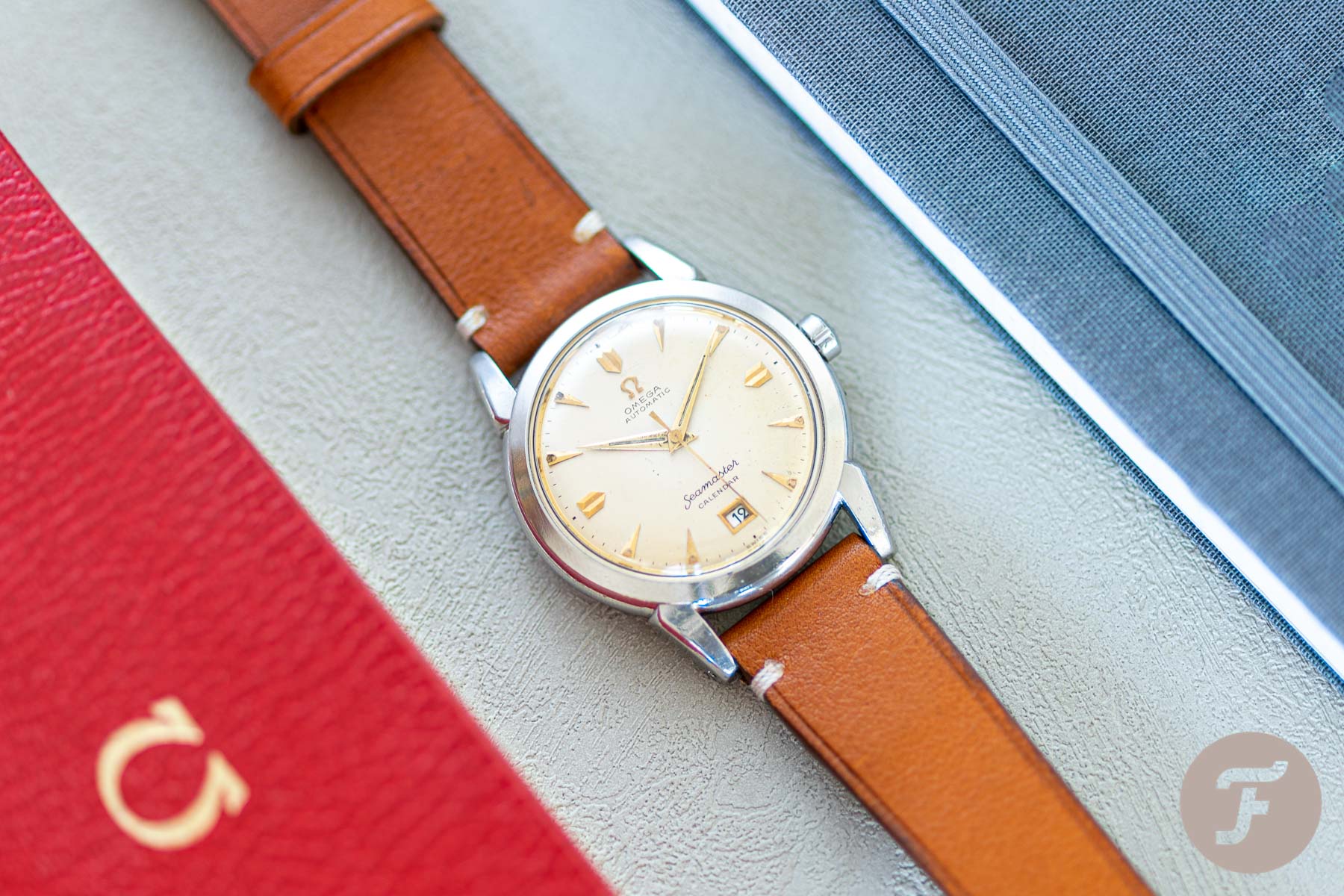 History Of The Date

The brand introduced the earliest Seamaster watches in 1948, just a few years after the end of WW2. During the war, Omega, like many other Swiss brands, produced watches for various armed forces. The brand developed a few things for military pieces — like water-resistant housings — that eventually went into production with early, regular Seamasters.

Only four years later, the first Omega featuring a date came to the market. It was the Seamaster Calendar 2627, the topic of today’s article.

As a side note, it is worth mentioning that in 1952 having a date on a watch was already commonplace. Rolex had come out with the first Datejust in 1945 (the first automatic watch with a date window on the dial). Before that, in the 1930s, some brands were already offering manually-wound timepieces with such a feature. History suggests that A. Hammerly introduced the date on wristwatches as early as 1915, so you could say Omega was a little late to the party. 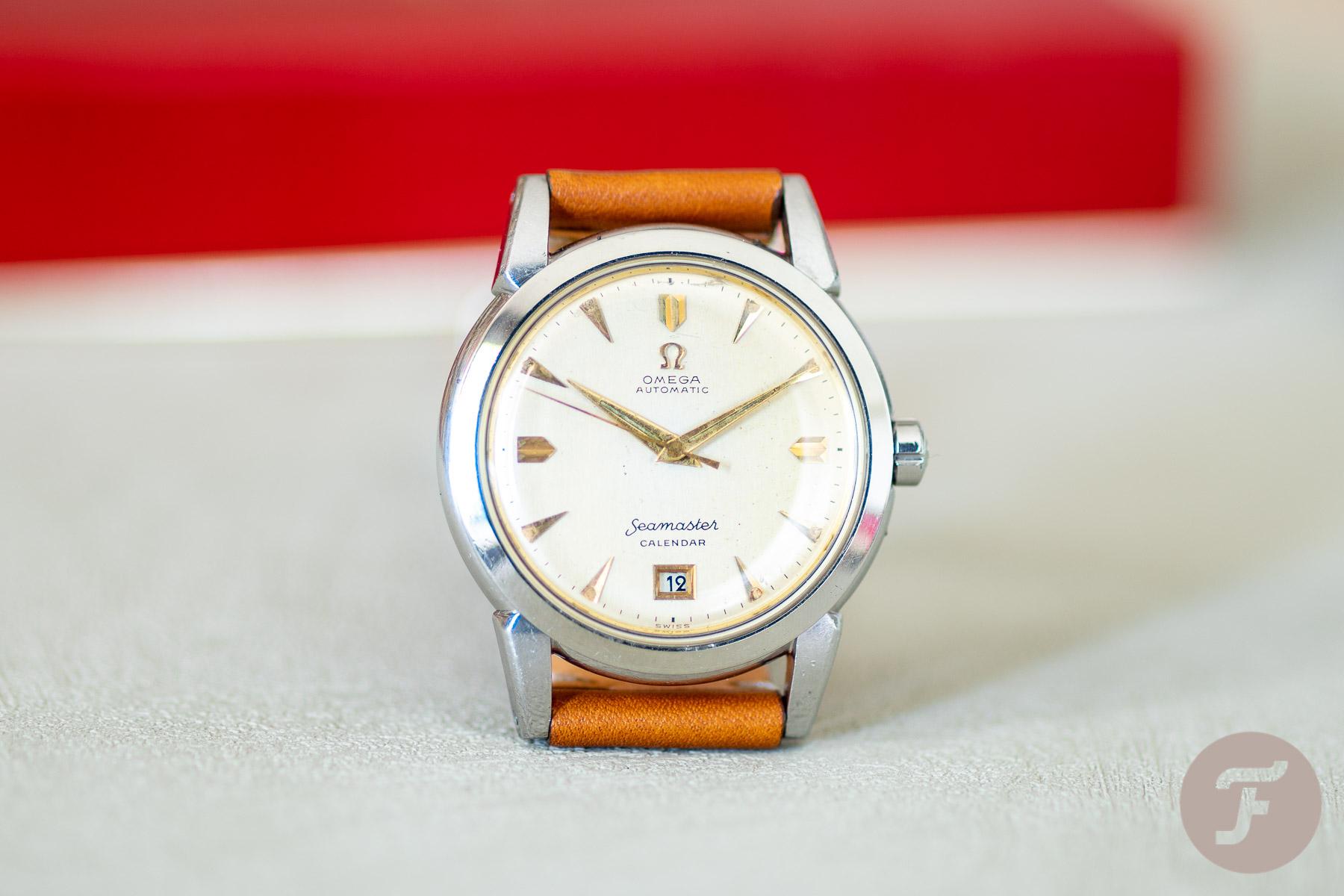 So in 1952, the reference 2627 came to the market in stainless steel or 14k gold-capped steel case. Although the width is only 35.3mm, thanks to its long, chamfered lugs, the lug-to-lug length is 42.6mm. Reference 2627 looks great on the wrist, although it does feel small. What the Calendar lacks in width it makes up in length and thickness, the latter being almost 12mm. The case back is screw-in (threaded) to ensure waterproofness, and the original Omega clover leaf crown (which this model has) is screw-down.

The bezel is beveled and 2.1mm wide. It holds in place a reinforced crystal. You can see that the lugs are drilled — a common feature among most vintages watches. All the above correspond to a 30m water resistance, which might not seem like a lot today. However, in the early ’50s, a timepiece with this depth rating, a date, and an automatic movement was exceptional. 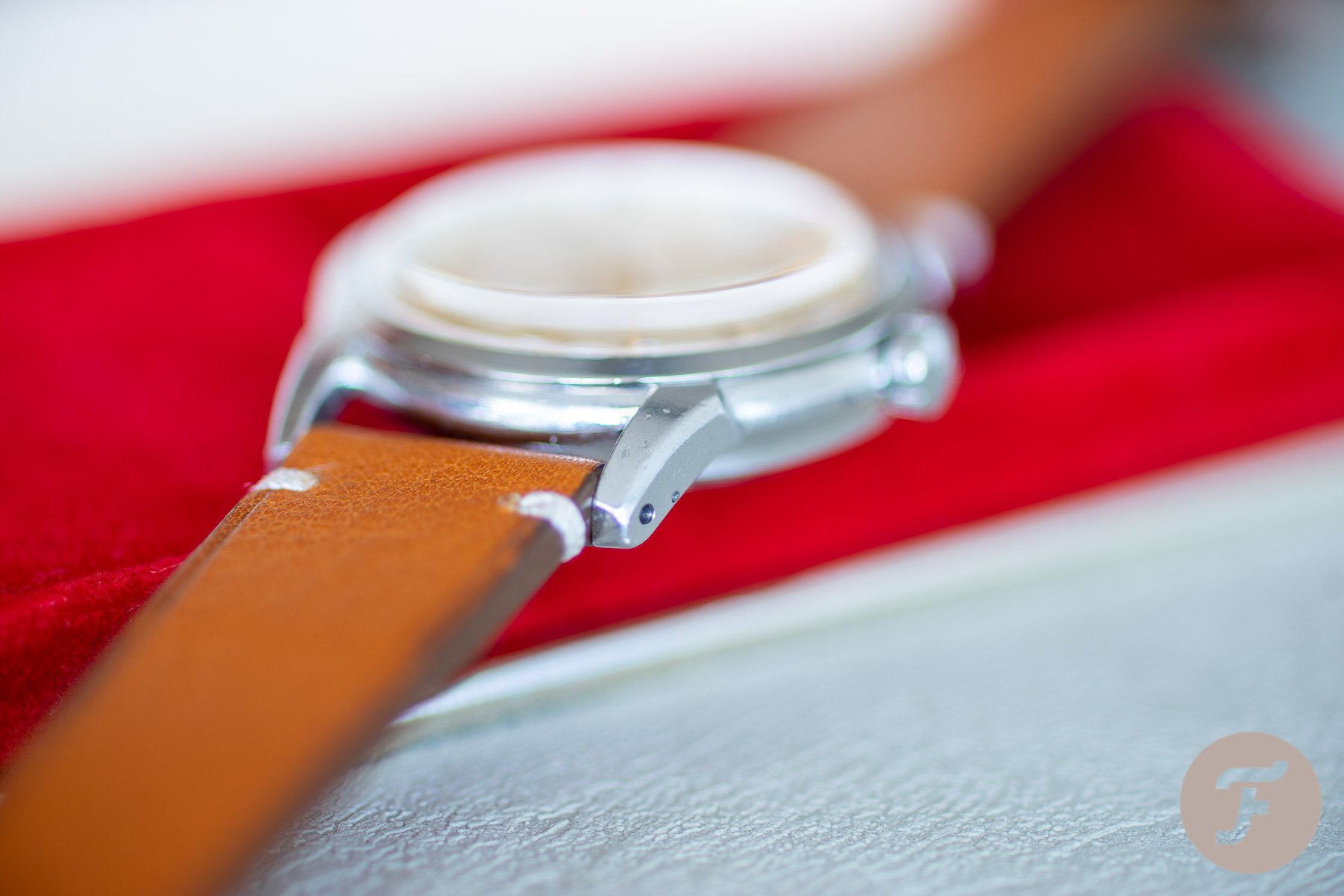 From square to trapezoid

While the watch case was a sight to behold, the Omega Seamaster Calendar 2627’s most crucial element was its dial. The essential components were identical. There was an applied logo at 12 with the text “Omega” and “Automatic”, along with a date window at 6 with “Seamaster” and “Calendar” above it. Just like the logo, the indexes were also applied either in gold or silver color. The date aperture had a frame matching the indexes, logo, and hands’ tone.

While the very early models had a square date window, from 1953 onwards, Omega changed that to a trapezoid shape. This way, you can easily distinguish various 2627 models. On most later watches, the indexes were also thinner; the early 1952 indexes were wide and had a large lume dot. You can find these Calendars with white (nowadays often cream) or black dials with a smooth or waffle texture. 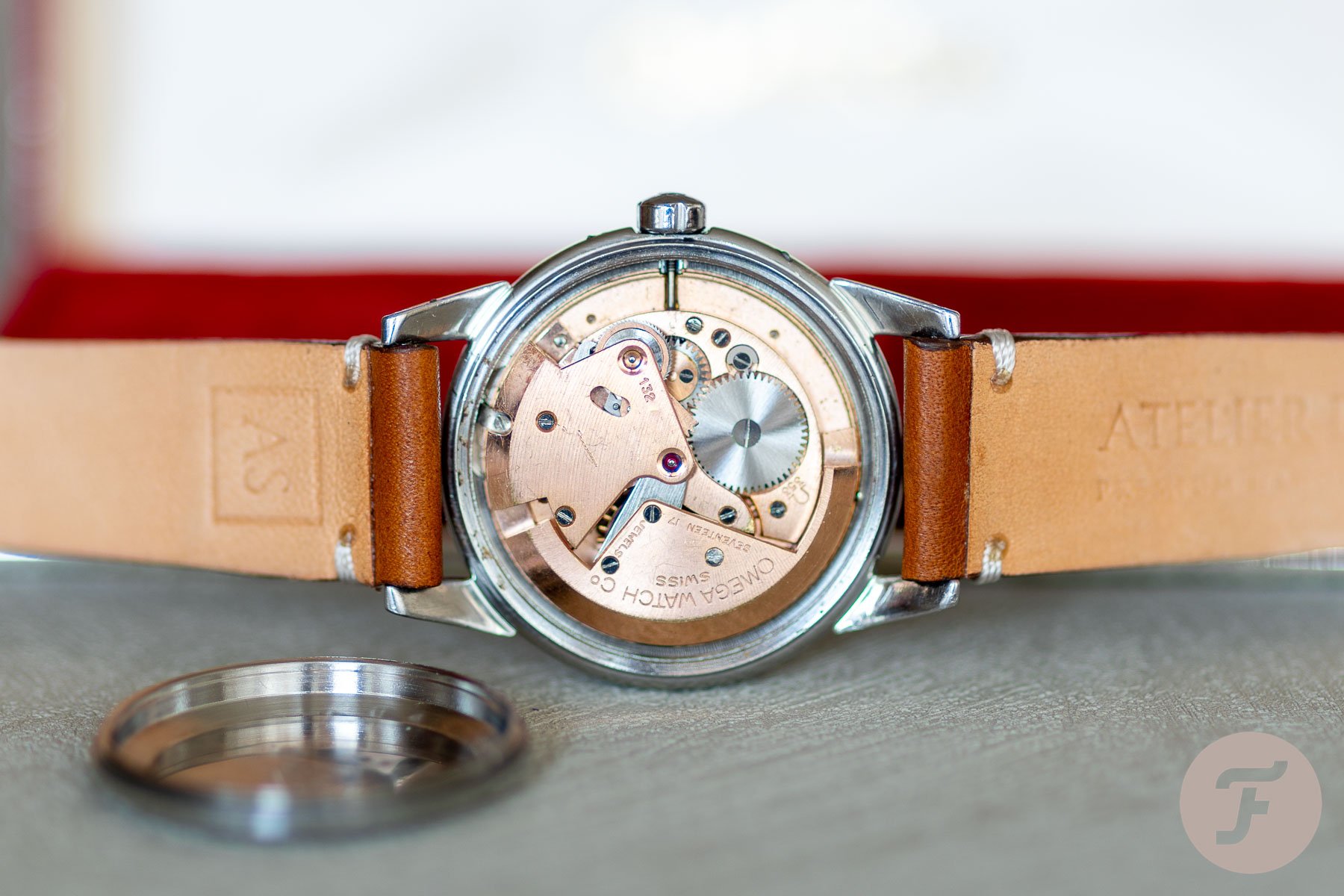 When we talk about a watch with a new — to Omega — feature like the date, we need to mention its caliber. Inside the Seamaster Calendar 2627, beats Omega’s caliber 353. An early (bumper) automatic movement with 17 jewels, 42 hours of power reserve, and (an odd) 19,800vph (equating to 2.75Hz). Later, Calendar models would use the caliber 355. That movement is also a 353 having undergone a bit of a redesign.

While the waterproof case is an integral part of the watch, the 353 with its date feature is just as significant. Only two years after reference 2627 debuted, Omega released yet another model that looked almost the same. It was the reference CK 2757 powered by caliber 355. While our watch had a threaded case back, reference 2757 had a press-in case back but the same water resistance (30m). Otherwise, the two watches were very similar. 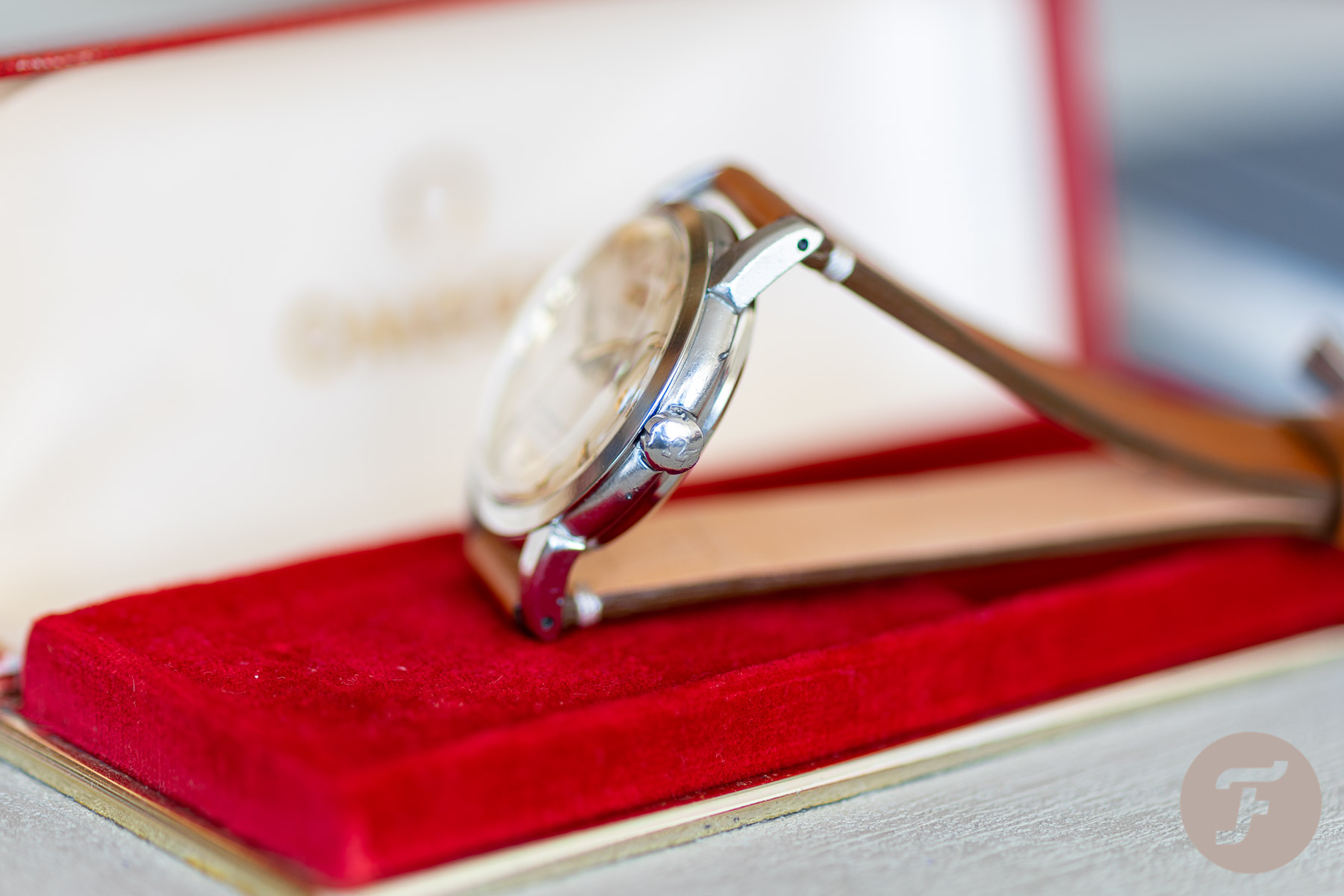 Due to the relatively long production span, it is somewhat easy to find this reference on your favorite online watch site. As such, the prices are not exceptionally high, somewhere around $400–600 for a steel model. However, it is also worth mentioning that most either have a dial that has seen better days or have been subject to a redial. Neither option is particularly desired among collectors.

Pristine examples often fetch prices closer to or above $1k. If you look at the rare 18K solid gold 2627s, the market is very different. Here you are looking at $1.5K and up. While the Omega Seamaster Calendar 2627 is a lovely watch, and I enjoy my piece (which is near and dear to my heart), I’m not sure I’d pay $800–1,000 for a steel one, not to mention the gold. But hey, to each his or her own. 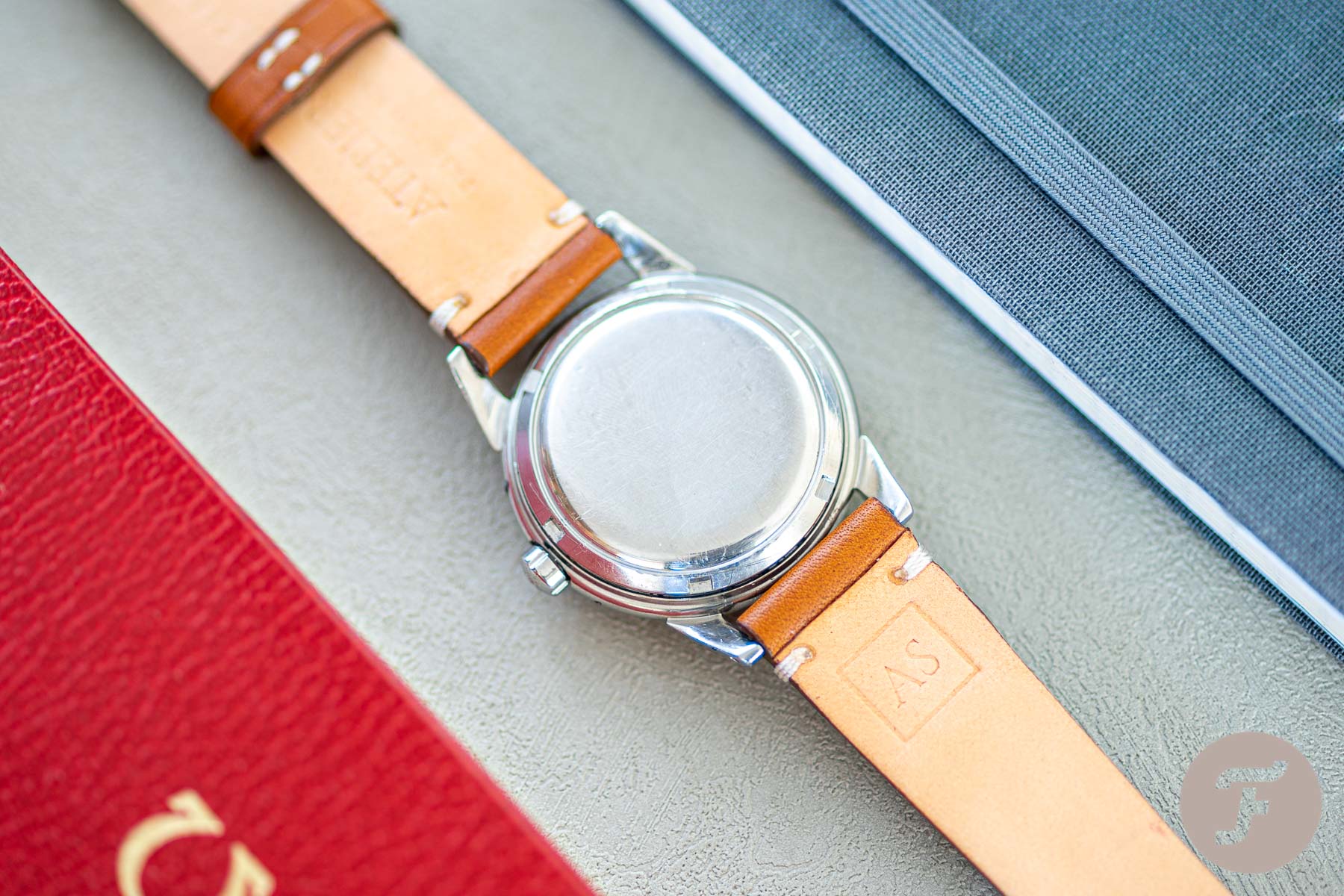 With a bit of luck and patience, you’ll be able to find one in good condition for a fair price. Another aspect to consider before you pull the trigger is the size. I feel that reference 2627 wears well even on larger wrists. I’ve seen cases with longer and shorter lugs (but with the same case design) so make sure you get one with the long lugs if you have a larger wrist. In any case, reference 2627 is a beautiful vintage timepiece from the beginning of Omega’s golden era. Watches like the 2627 or other vintage Omegas from this period (the 2657 or the 2639, for example) represent great value for money. Their charm hasn’t faded even after 60+ years. What is this, if not a sign of excellence?