Go on, treat yourself to a leather-clad designer chronograph from Zeitauktion
Lex Stolk
comments 6
Share

“Do you want something exceptional?” That’s not me asking, it’s Alain Silberstein in an advertisement back in 2002. The “Architecte Horloger” with the mustache is promoting his new Krono Bauhaus, a limited edition of 250 pieces in many colors and one exceptional thing in common; a case clad in exclusive alligator leather. I spotted the reptilian chic Alain Silberstein Krono Bauhaus Alligator on Zeitauktion. And now I’m asking you: “do you want something exceptional?”

Do you know what triggered me when looking at the reptilian chic Alain Silberstein Krono Bauhaus Alligator on Zeitauktion? Two things: firstly, the very recent trio of Louis Erard × Alain Silberstein watches that popped up at HQ. And secondly, I got transported back to the late ‘90s and early aughts when I couldn’t stop leafing through the many issues of Peter Braun’s “Armbanduhren Katalog”. In the 1990s and early 2000s, Frenchman Alain Silberstein (1950, Paris) was the Bauhaus-inspired forerunner of avant-garde watchmaking.

Silberstein always made it to the quarter-finals.

Pick one watch from every brand, write it down, go through the final list — preferably with a mate who was into watches too, to spark the discussion — narrow it down, end up with your favorite watch in the whole wide world. I’m not sure if an Alain Silberstein creation ever made it to the top of the list, but I know for sure that it made it through the first round with great ease. Silberstein always made it to the quarter-finals. Without breaking a sweat, I dare to remember. 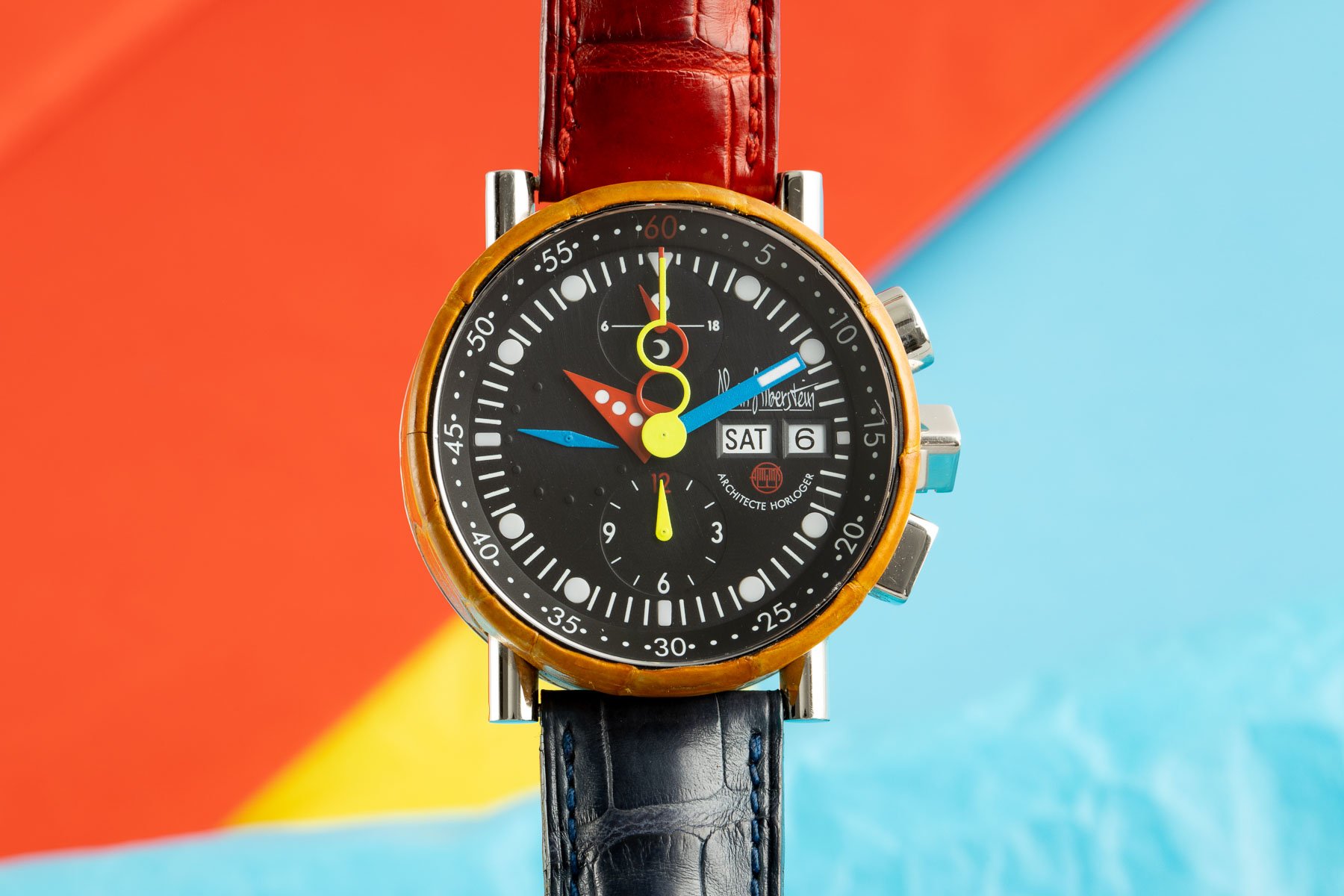 “Does humor belong in watchmaking?”

But why did the geometrical shapes and primary colors resonate so much with me? “Because of Piet Mondriaan and Gerrit Rietveld,” would be the correct intellectual answer. Maybe it did on a subconscious level, but it must have been a more down-to-earth kind of thing; I liked the colors. And the shapes. The shape of the barrel-like case, but most of all the shapes of the different colorful hands. “Does Humor Belong in Music?” Frank Zappa asked himself on his 1984 live album with the same title. And to paraphrase the maestro, “does humor belong in watchmaking?” Well, there’s probably nothing as subjective as humor and a sense of it. Lazy humor without thought can be excruciatingly cringe-worthy, but still, the answer is “yes”, IMHO. We can’t have enough humor in watchmaking — we should welcome lightness, the absence of pretentiousness, and the fun derived from watchmaking as often as we can. 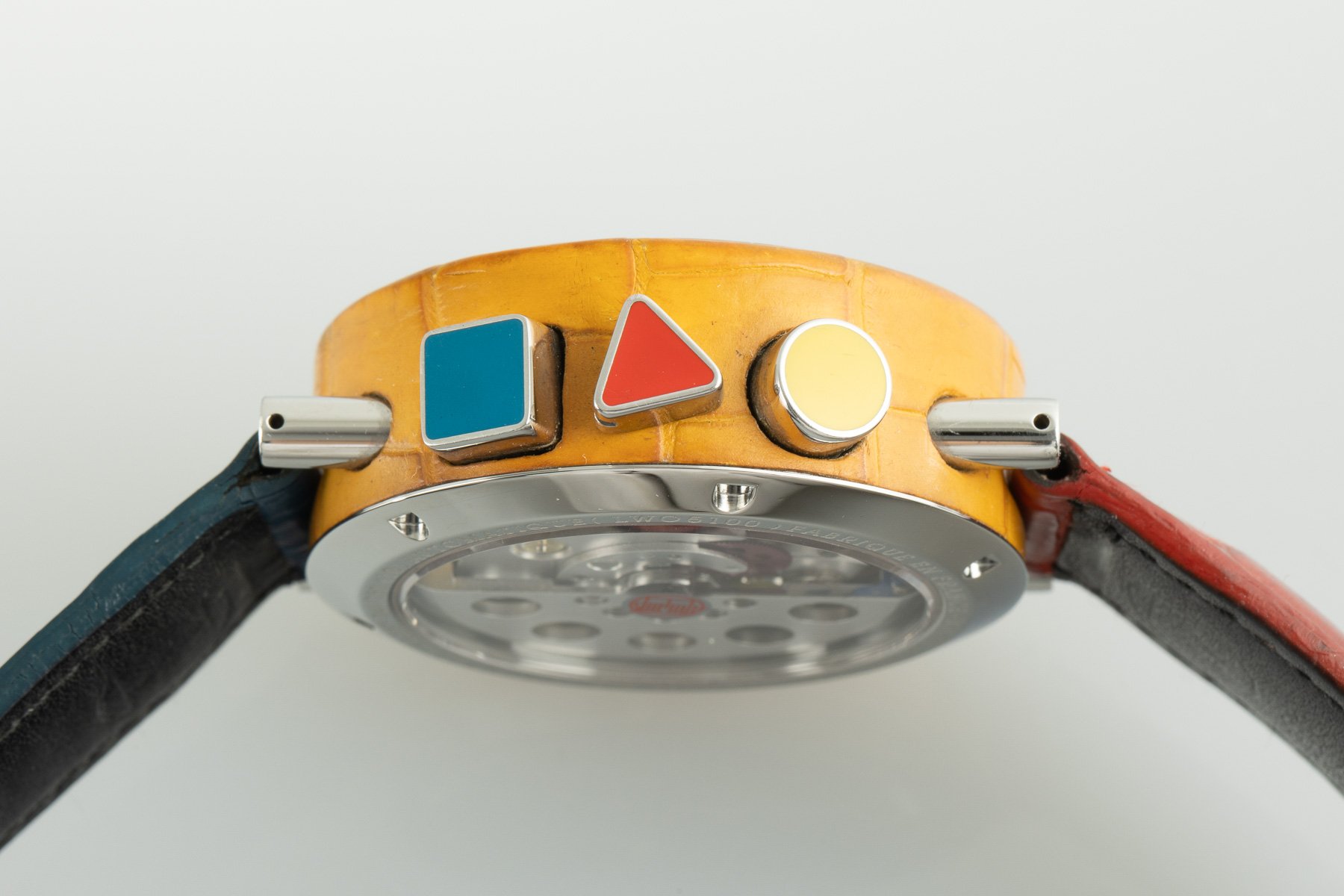 Humor in watchmaking can be bold, as Konstantin Chaykin showed with the smiling Harlequin Ventuno, or Commedia dell’Alta Orologeria. But strapping a MB&F Horological Machine No. 4 on the wrist — it’s like putting on a jet fighter — is also quite the experience. It’s a watch with toy-like DNA and shouldn’t be taken too seriously despite its very serious mechanical complexity and price. What both watches have in common, is that their “comedy” is based on technical excellence and craftsmanship. Alain Silberstein wasn’t trying to be funny with his watches, but his avant-garde designs put a smile on people’s faces anyway. Take the Krono Bauhaus Alligator I spotted on Zeitauktion. It makes you smile, it makes you look twice, it leaves you with your mind blown. And when you look behind the extravagant exterior, the interior is also interesting. 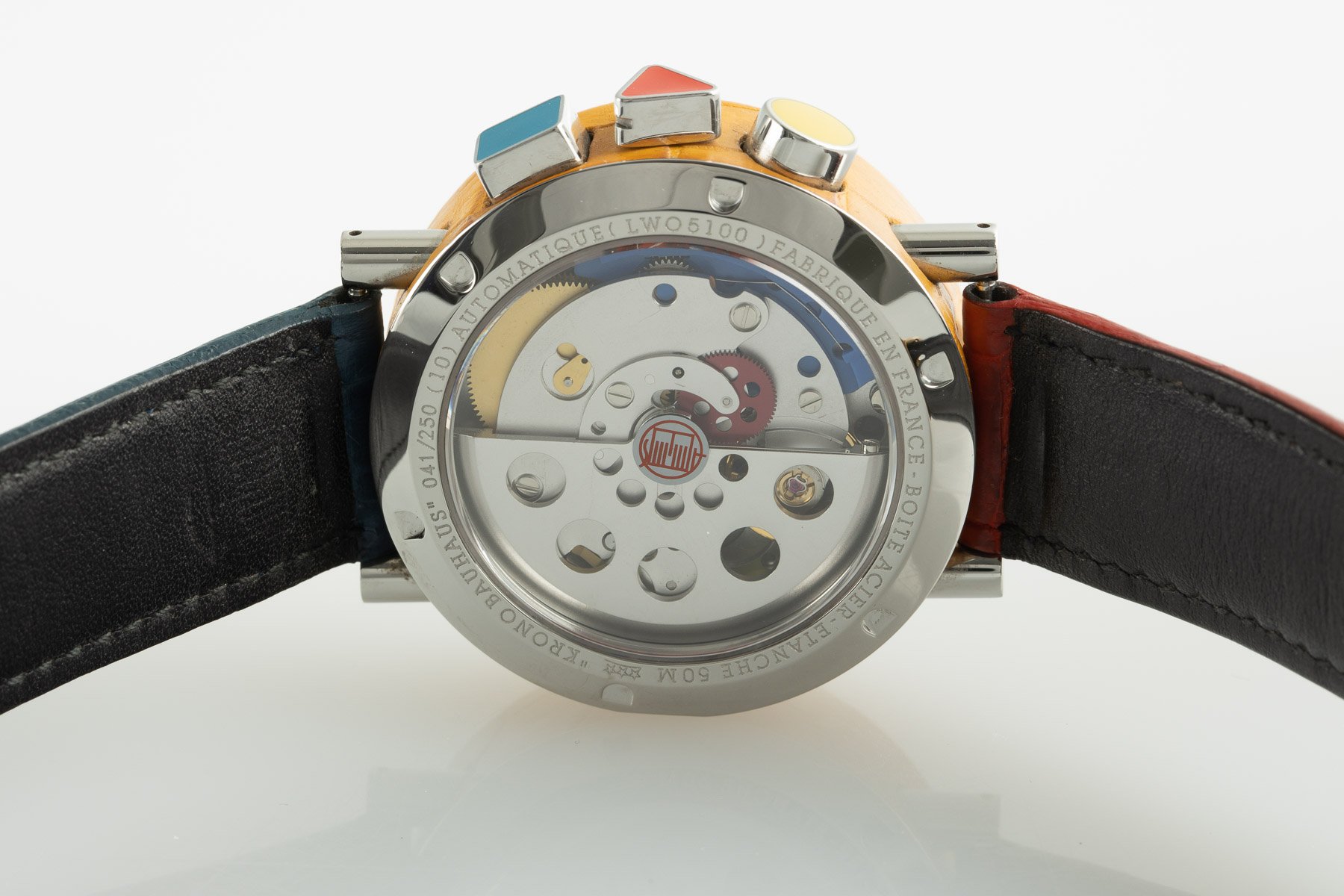 The 40×16mm Krono Bauhaus Alligator has no trouble catching the eye with its colorful hands and pushers in all kinds of shapes. Inside the steel case beats a version of the Lemania 5100 automatic chronograph caliber. This movement was built between 1974 and 2002 and was designed for use in tool watches. That’s why it’s robust, strong, and also quite thick. But in an instrument watch, height is not a problem. The Lemania 5100 used to compete with the Valjoux 7750.

And when you design the four central hands the way Silberstein did, that layout creates a real spectacle.

The big difference between the two is that the 4Hz Lemania 5100 has the chronograph minutes on the central axis along with the seconds of the chronograph. And when you design the four central hands the way Silberstein did, that layout creates a real spectacle. Also, it is not that common anymore to see the 12-hour counter at 6 o’clock, the small hacking seconds at 9, and the 24-hour indication at 12. The day and date indication at 3 o’clock may be traditional, but it doesn’t take anything away from the unusual layout. 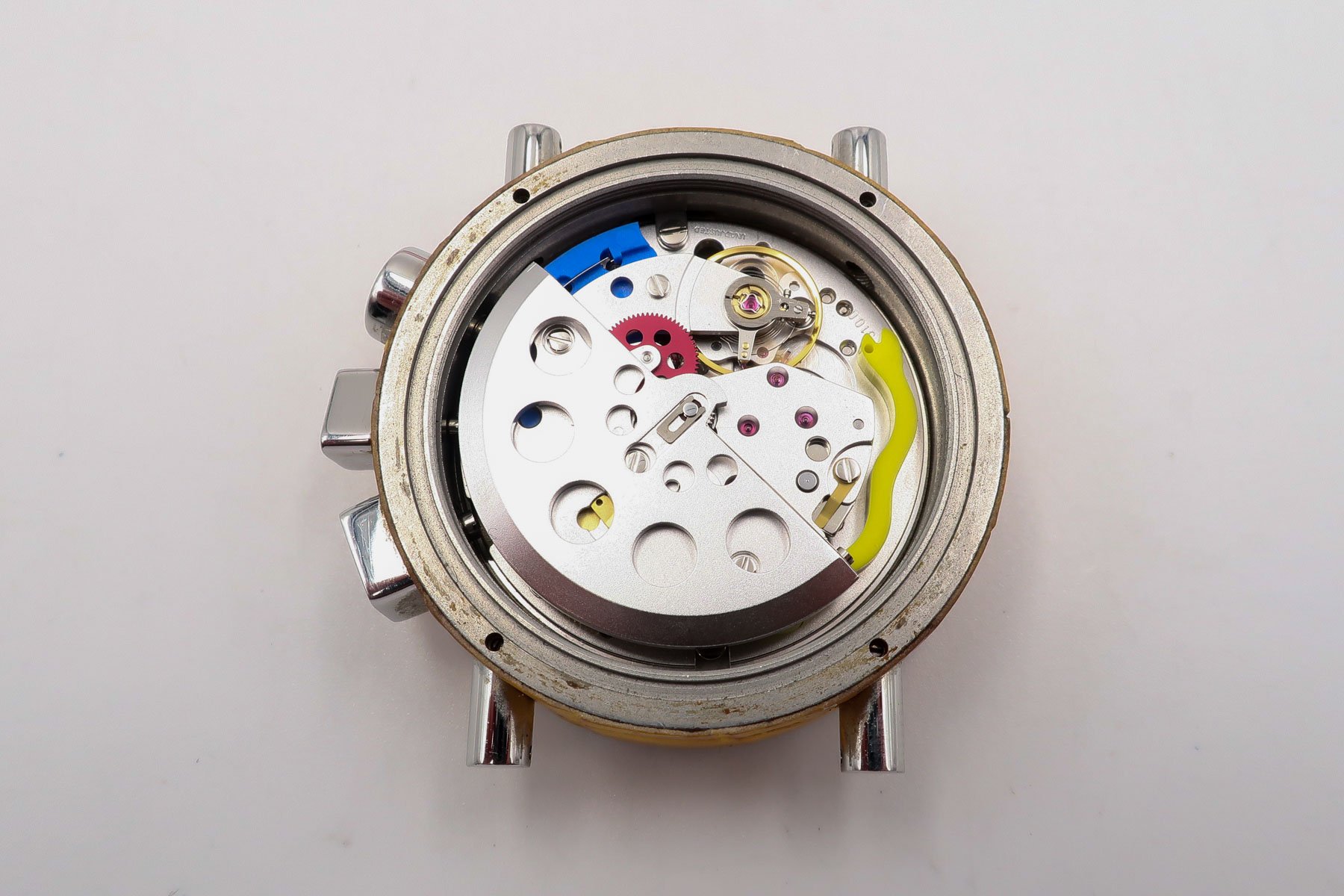 It gets the job done

There’s even more unusual stuff in the version of the Lemania 5100 Alain Silberstein put in the Bauhaus Krono. Silberstein changed the color of some nylon parts in the movement to match the primary colors theme. It’s the cherry on top of a movement that was in fact a low-cost, efficient and effective, easy to produce and service workhorse of a movement that did its job without complaining. Shake a watch with a 5100 caliber, and you might hear that the rotor isn’t spinning on precision ball bearings. Instead, the rotor is placed on a hard iron bearing — it gets the job done. 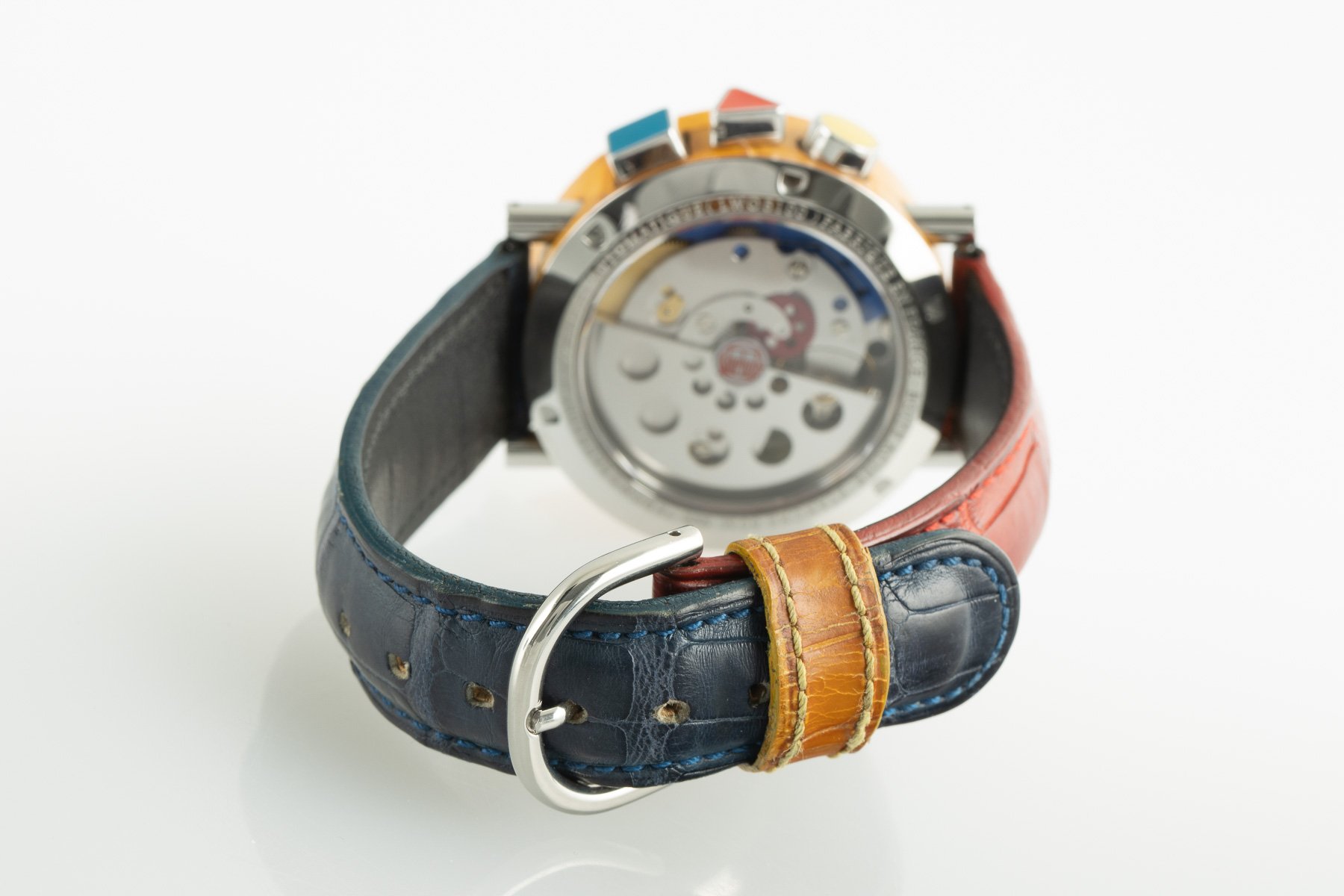 Now it’s time to address the elephant in the room, or rather the alligator, the colorful alligator. Silberstein used the same primary shades seen on the watch for the strap and the case. So you get a strap made in yellow, red, and blue alligator and a case clad in yellow alligator leather. What do you think? Exotic and extravagant enough for you? Back in the ‘90s, Silberstein ruled the roost when it came to far-out avant-garde designs.

You’ll be in the company of greatness with this Krono Bauhaus Alligator on your wrist.

You have to embrace and unleash your hidden extravagance to fully appreciate the Krono Bauhaus Alligator. You know who did? Horacio Pagani, the creator of the mind-blowing Zonda supercar and his even more outrageous Huayra. You’ll be in the company of greatness with this Krono Bauhaus Alligator on your wrist. A watch that comes in a sweet-looking original Alain Silberstein case in primary colors. 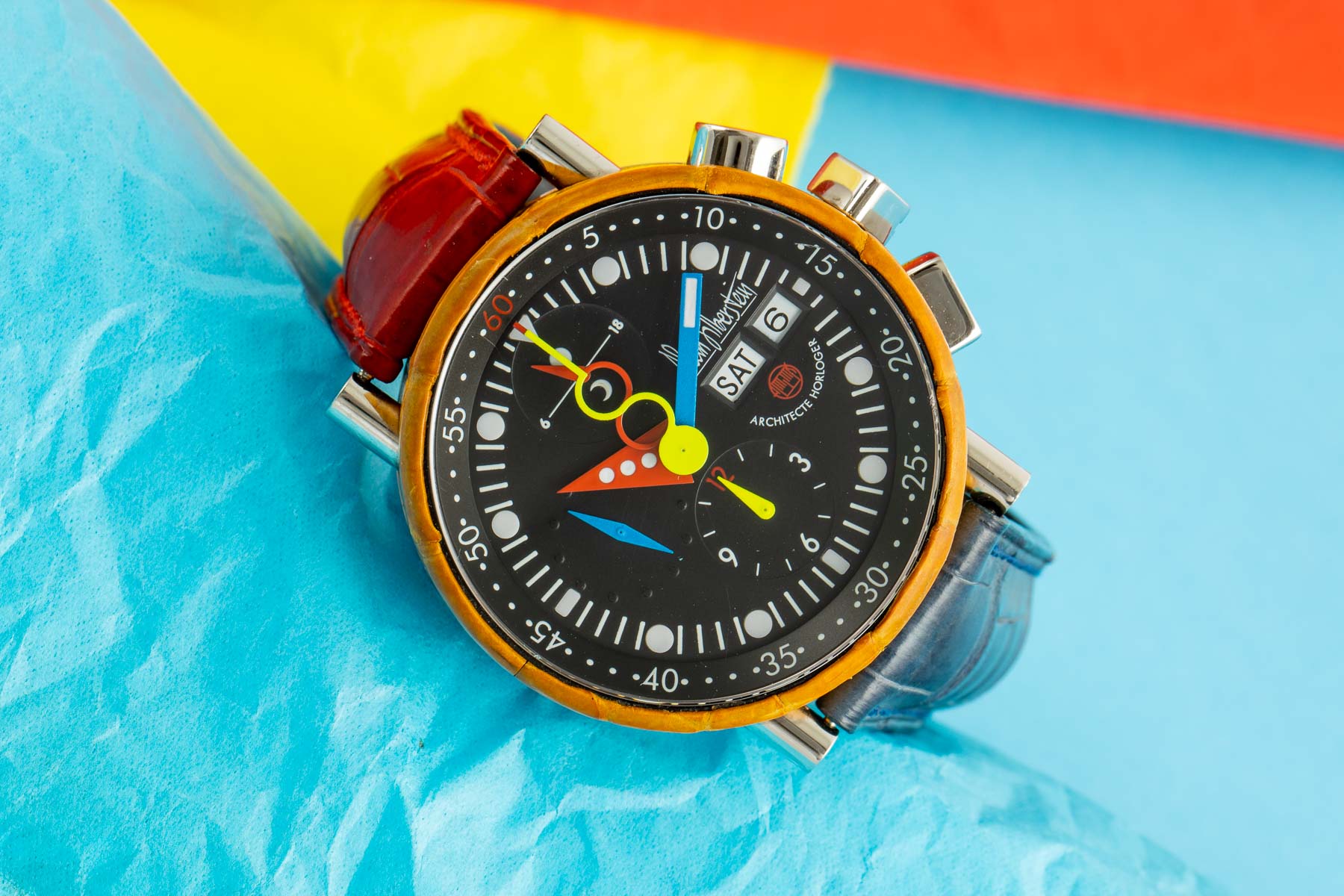 Please keep in mind that in 2009 the MB&F HM2.2 Black Box put Alain Silberstein back in the spotlight. In 2016 there was a follow-up in the shape of the MB&F LM1 Silberstein. And more recently, Louis Erard started playing around with Silberstein’s designs. The brand may be gone, but the collaborations now reveal that the original watches from the ‘90s and ‘00s haven’t lost any of their flamboyant appeal. And when this particular Bauhaus Krono Alligator is gone, there are other enticing Silberstein creations around that will put a smile on your face. Check them out on Zeitauktion.

Hot Topics
Introducing: The New Seamaster Professional 300M 60 Years Of Bond — With A Special Animated Case Back
100 comments
It’s Time To Invest In A Dress Watch — Our Picks From Breguet, Omega, Grand Seiko, And More
67 comments
Are You Still After An Omega × Swatch MoonSwatch?
65 comments
Sunday Morning Showdown: The Tudor Pelagos Provocation — Pelagos Vs. Pelagos 39
55 comments
The Rolex Waitlist Conundrum — How Much Will The Price Of Your Watch Increase While You Wait?
48 comments
Popular
The Omega Seamaster Diver 300M Returns – On The Wrist Of Daniel Craig
Paul Dezentjé
17
Why Are There No Stainless Steel Rolex Watches Available?
Robert-Jan Broer
121
Speedmaster Speedy Tuesday 2 “Ultraman” – Out Now! (Live Pics and Video)
Robert-Jan Broer
32