The Ultimate Pilgrimage For The Cartier Enthusiast — This Weekend Only!

Lovers of the chic French brand are actually pretty spoiled. They quite often have the opportunity to enjoy the great exhibitions that Cartier holds regularly around the world. “Cartier and Islamic Art” in Paris and later in Dallas was one of the most recent. Currently, there are two great “must-visits” in Geneva and Paris, which one could nicely combine into one trip for an exciting weekend. One is the Rare Watches Exhibition in Geneva. The other is the renovated Cartier flagship store at 13 Rue de la Paix in Paris that just reopened after a closure of about two years.

This is the exact same location — 13 Paix, as it is often — is where Alfred Cartier and his son Louis decided to move their business in 1899. This boutique, the Fifth Avenue store in New York, and the New Bond Street boutique in London should be seen as one of the three historic Cartier mansions. Let me give you a brief description of the possibilities to make your weekend. 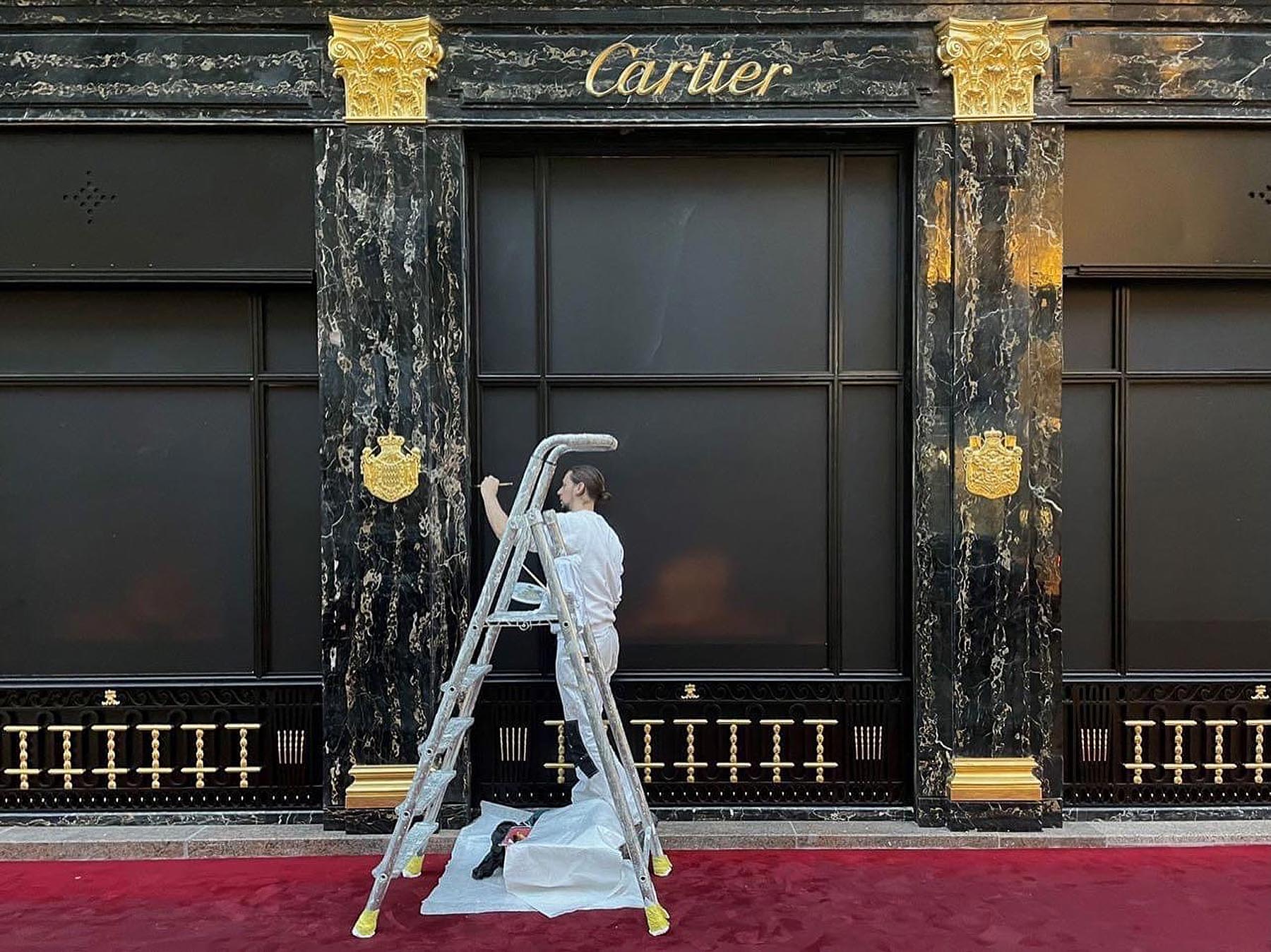 After several renovations over the decades, the Paris location closed again for almost two years due to a major restoration/redesign that needed to happen. Several architects and many artists contributed their talents to turn the place into something spectacular. Mind you, 13 Paix, with its classical facade in portoro (black marble), is, after all, the oldest existing Cartier boutique.

During the last 25 years, I have often visited Cartier at this address for service, sometimes for a short visit or for simple advice, and I knew the building quite well. And despite the fact that I already had a threshold fear the first time, I have come to love that classic interior very much. I was, therefore, afraid of the renovation, and feared that the past would be erased and a new modern, meaningless interior would appear. I couldn’t imagine what was going to happen. 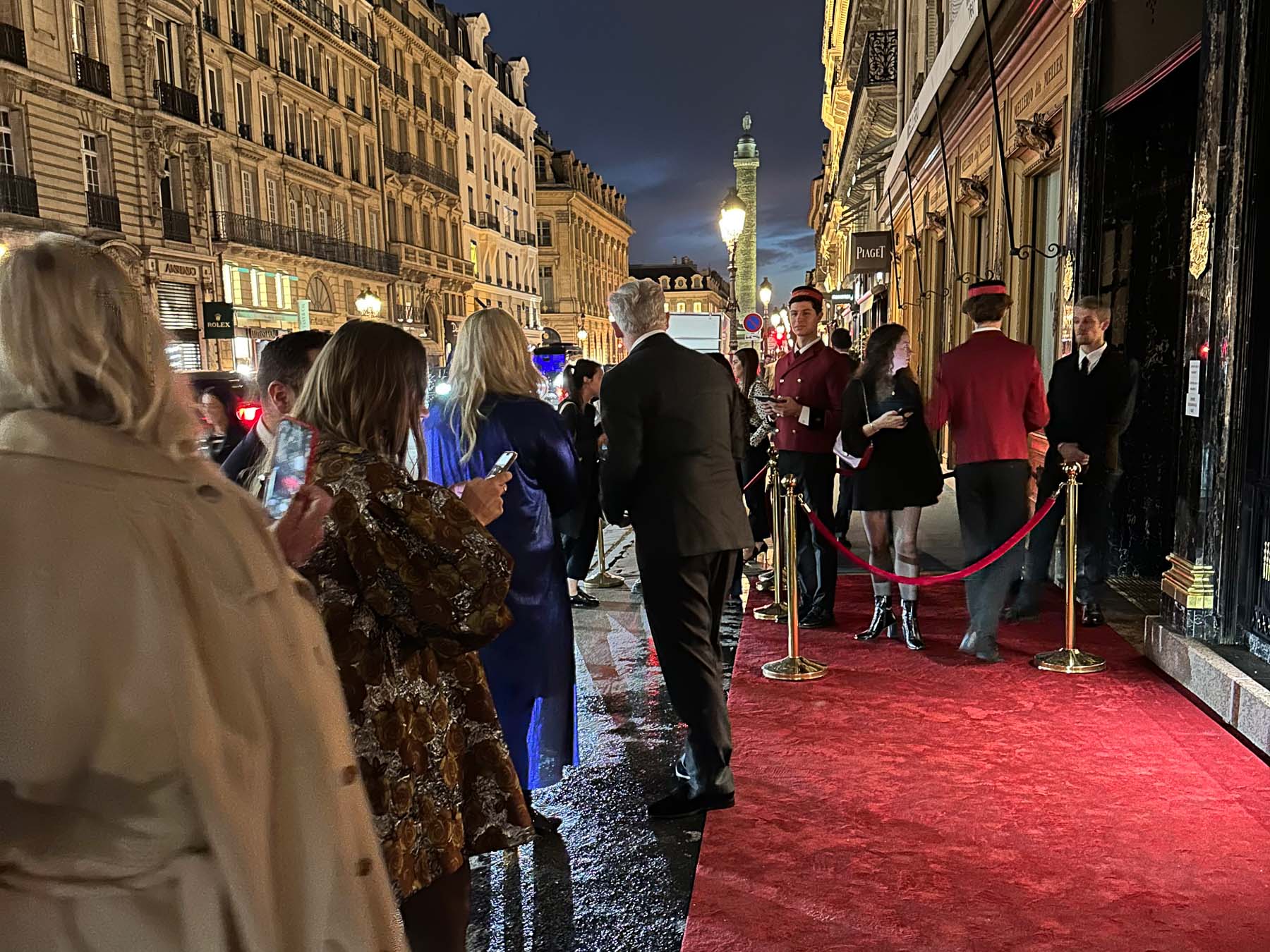 Finally, Cartier announced that the official reopening would be on October 21st. That same afternoon, I walked quickly down Rue de la Paix and saw that the painters were still at work at the entrance. The red carpets to receive the guests were not there yet. They worked on the details until the last minute. At 7:00 PM, it was time for the 50 guests to enter. We immediately took the elevator to the third floor. 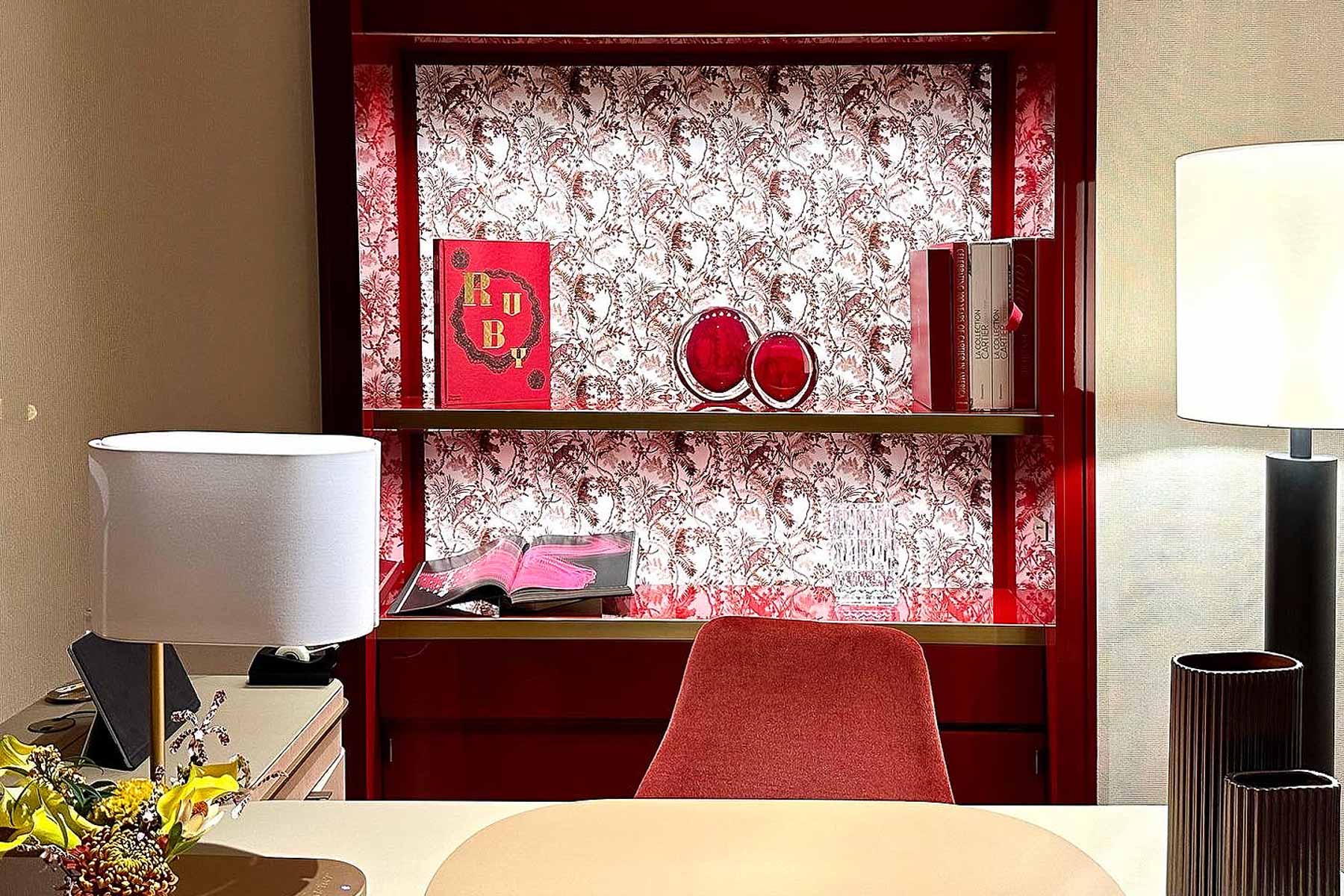 Upon leaving the elevator, the bellhops were waiting to present each guest with a glass of champagne, and then the looking-around could begin. On such a first visit, one should not really look too much at what is in the display cases because a lot of what has been done in this spectacular building will go unnoticed. I, for one, found it very impressive. The details, in particular, have received so much attention. The decorations, the wall coverings, the specially made furniture, the carpets… There is almost too much to mention, and it is impossible to discover everything in one short visit. 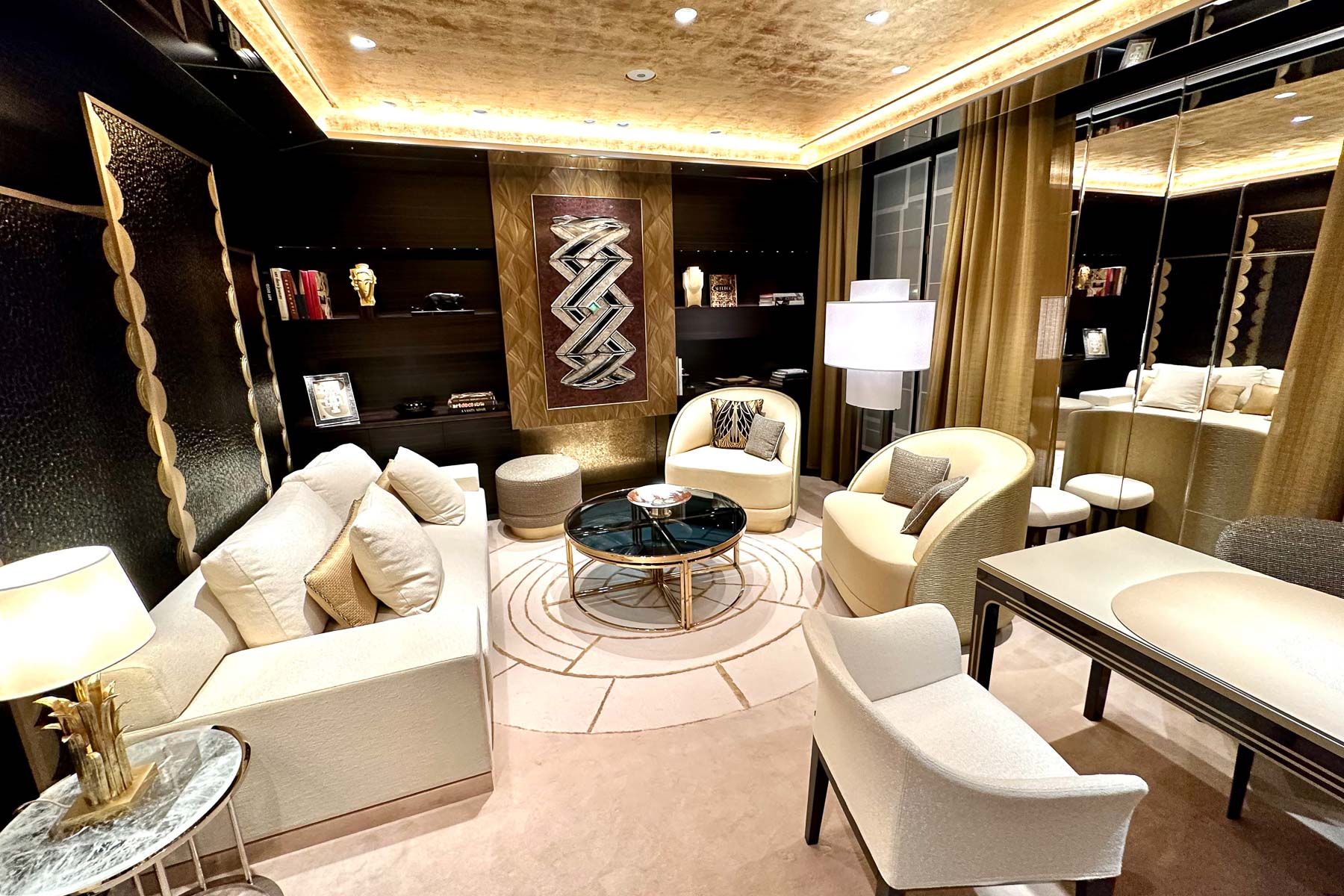 There are well-decorated soundproof rooms where the staff can sit down with clients to discuss the collection privately or just have a drink. And to be honest, I felt immediately at home in these interiors. They all breathe a kind of cozy and luxurious atmosphere. The architect Bruno Moinard said, “We wanted a visit to these spaces to be an enticement to come back and to come back again, each time savoring new surprises and delights.” Well, he definitely made that happen.

The original salons of Louis Cartier and Jeanne Toussaint have been restyled and equipped with amazing details in the form of carpet designs, wall decoration, and furniture. An eye for detail is what really counts, and one can see it in all areas of the imposing building. Métiers d’Art, stone marquetry, leather marquetry, and screen paintings, just to name a few art forms, all realized by famous artists, have provided an incredible result. 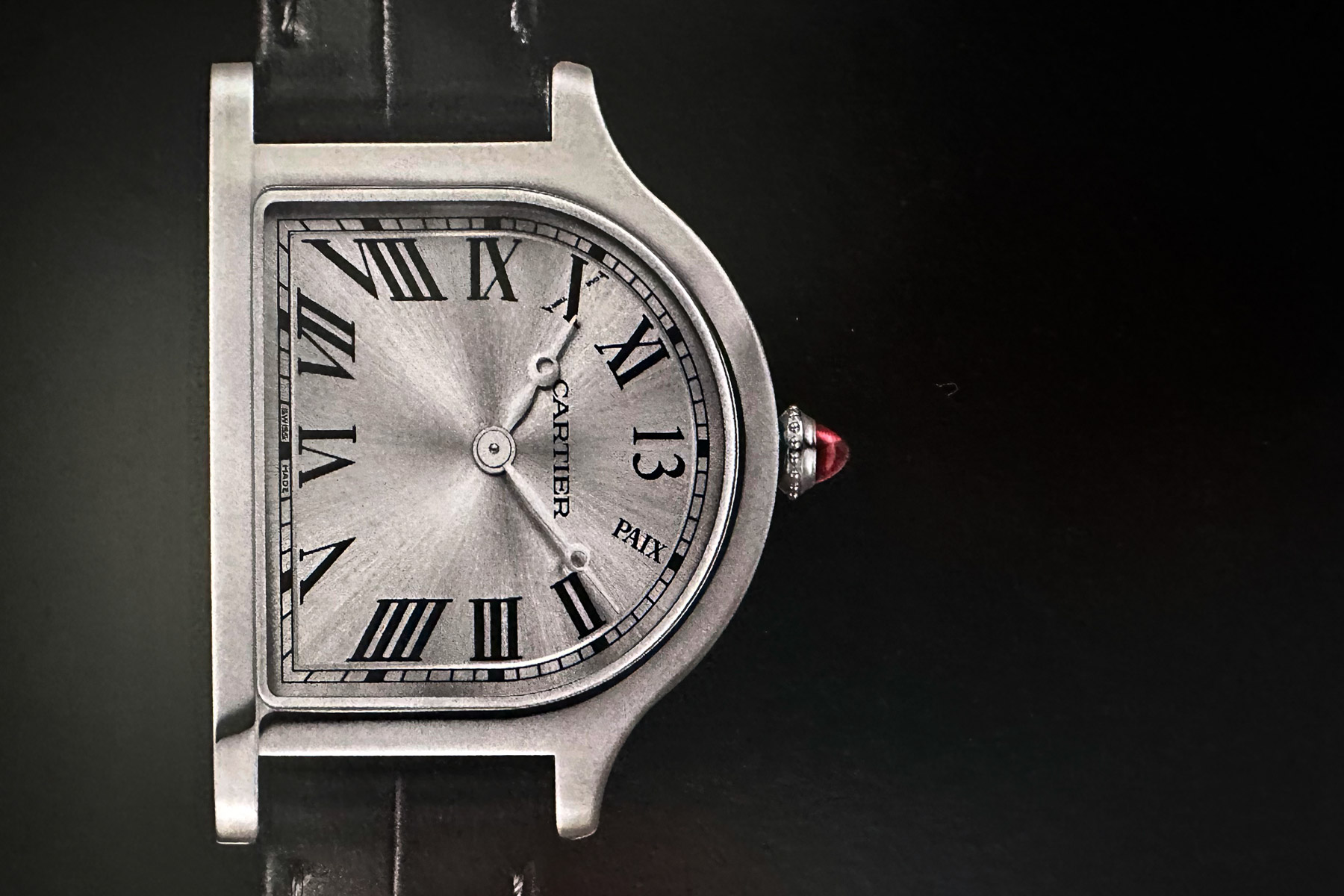 Working our way up

The two top floors designed by Bruno Moinard are now private and not open to the public anymore. There is so much to see and discover, however, that one easily overlook the limited-edition timepieces specially designed for 13 Rue de la Paix. And when I say “limited editions,” I mean really it; just 13 pieces have been made of the Tank Asymétrique, the Cloche, and the Tonneau. In these three historical models, the “XII” numerals make way for “13”, and the “I” marker yields its spot to the word “PAIX”.

All three watches are platinum and have the crown set with a ruby. I was actually expecting a few more limited editions, also in a lower price range, but this seems to be it. There is, however, a really cool coffee-table book available by François Chaille, 13 Rue de la Paix, that gives you all the details about the building and the renovations, illustrated with lots of photographs taken during the process. 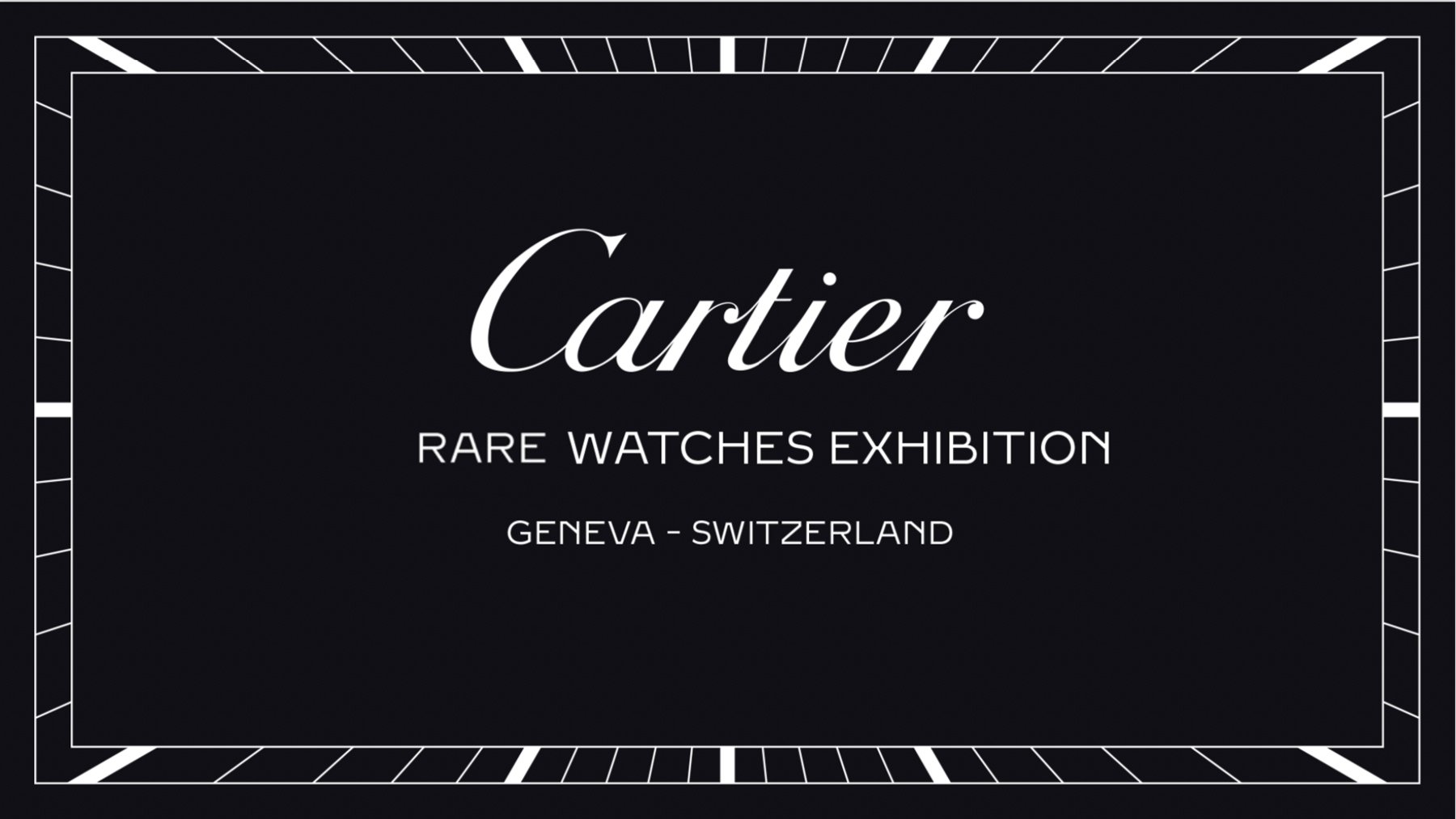 The other purpose of the trip is to go to the Cartier boutique in Geneva, where you could see the Rare Watches Exhibition. But you have to act quickly. This exhibition is only open to the public on November 11th and 12th. It is, however, a great chance to see 35 vintage pieces from Cartier’s private collection. Most of these watches have never been shown before and are proof of unique know-how and creative skills that have become extremely rare. 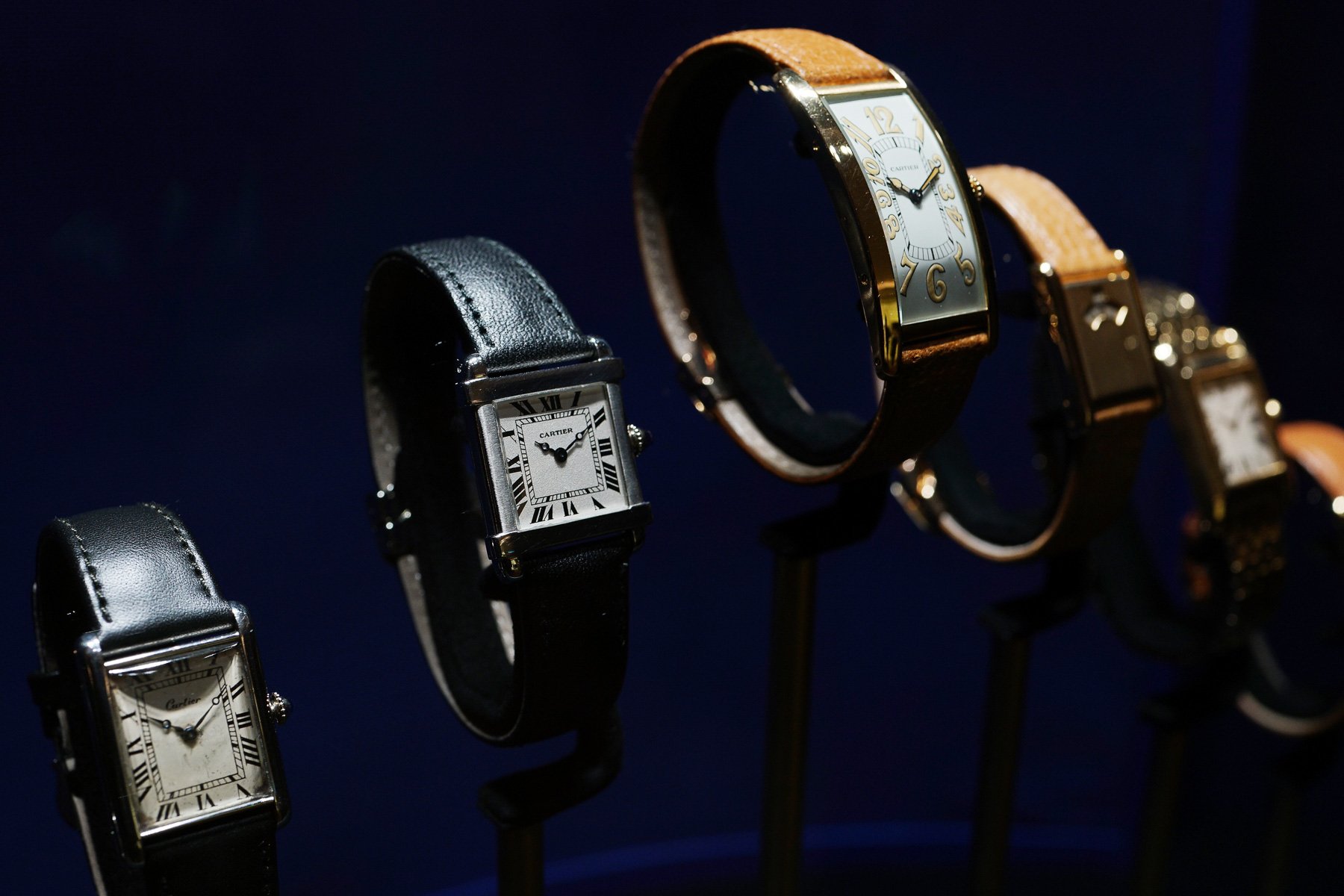 Cartier keeps these pieces in its private collection, and only a few of them sometimes pop up at one of the brand’s expositions around the world. These include the Santos-Dumont in yellow gold from 1912, the oldest version that Cartier has in its collection, the Tank Cintrée that was sold to Fred Astaire, and the Cleich in two sizes! There is even an example of the Tank à Guichets and three different models of the Pebble, including a smaller one. Next to these two vintage versions — one from 1972 and the small one from 1973 — the new 2022 re-edition Pebble is also on display. There are many more, including pieces from Cartier London, but I shouldn’t tell you everything.

Get out there this weekend

The centers of the cities of Geneva and Paris are connected by a convenient high-speed train, and the journey takes only three and a half hours from center to center. Of course, a flight is faster, but with the waiting times and travel to the airports, you are on the road for much longer. The Cartier flagship store in Paris is also open on Sundays, so you could easily do your pilgrimage this coming weekend. 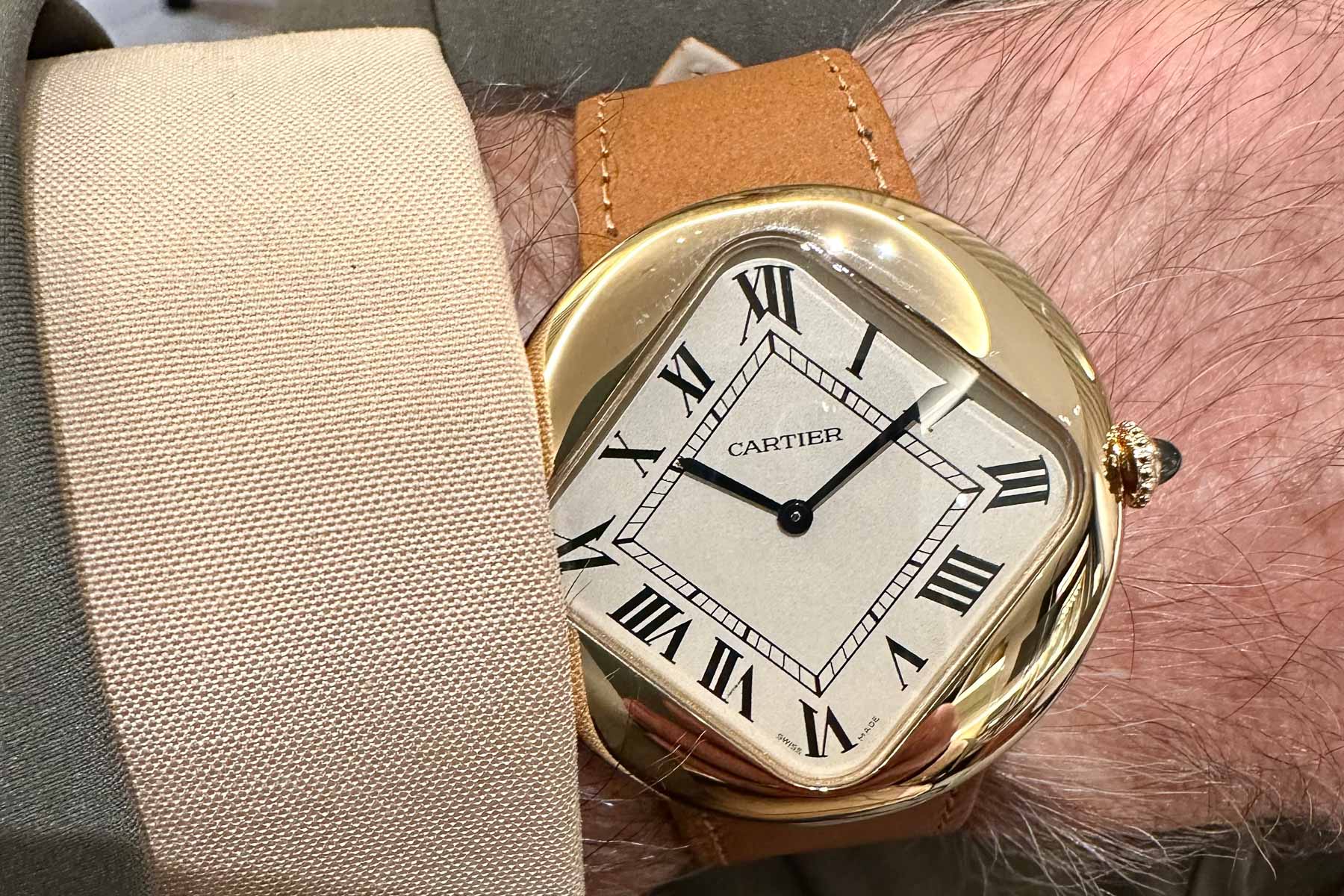 You could, of course, visit the 13 Paix boutique in Paris at any other time during the year. Bear in mind, however, that the exhibition at the Cartier Geneva boutique is only open to the public on November 11th and 12th, 2022.

Have a great time!