Three Awesome But Discontinued Tudor Watches You Might Not Know About

While the world goes gaga for the new Tudor Ranger and the many variants of the Black Bay, I thought it would be fun to look at some of Tudor’s now-discontinued models. The Shield has suffered from comments suggesting that it has lost some of its originality and now serves only to ape the Crown and fill in gaps in its bigger brother’s repertoire. Whether or not that is the case is largely subjective, but Tudor has had some original watches in its long and illustrious past. Here are some other models that may be gone but not forgotten.

For many collectors, the post-Submariner and pre-Heritage Tudor era was a “difficult” time that saw marked experimentation with wild and wacky designs. The situation wasn’t helped as Tudor withdrew from two of its biggest markets — the US and UK — for over a decade. While watches from this period may not be as popular or well-known as the Submariners or the Black Bays, they are still worth a look and present some unique and charming options to add something cool to your collection. 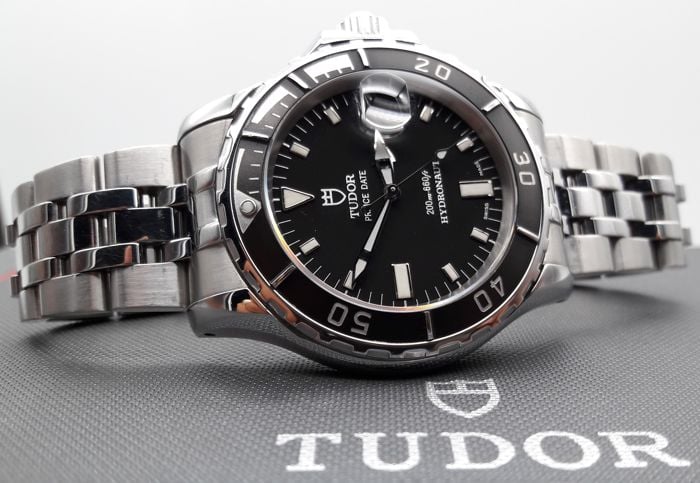 This article came about when I stumbled across this watch just recently. I hadn’t seen this handsome little watch before. Tudor’s sporty reference 89190, launched in 1998, replaced the full-sized Submariner reference 79190. The Shield kept the mid-sized 36mm 75190 Submariner and 33mm 73190 Mini Sub in its collection, though. Initially labeled as the Prince Date Hydronaut, the watch marked Tudor’s dive (pun intended) into a new period for the brand. With it, Tudor moved away from the iconic Submariner that propelled it into the hearts and onto the wrists of the modern-day tool-watch enthusiasts. It was the beginning of the “-naut” phase of the early 2000s, which saw models aimed at intrepid explorers, hence the suffix.

In my opinion, reference 89190 was the most attractive of the Hydronaut references. Its Submariner ancestry proudly remained, but the watch had a more modern style for its era. It featured a rounder, sportier case profile than the Submariner and a unique mid-case that partially enveloped the unidirectional bezel near the lugs and crown protectors. The dial was reminiscent of the “Snowflake” dial, but the non-cardinal markers were rectangular rather than square. An arrow-shaped hour hand and sword-shaped minute hand replaced the “Mercedes” hands of yore. Inside, an ETA 2824-2 powered the 89190.

In the years that followed, the Hydronaut saw many different variations, with vibrant-colored dials as a calling card of the collection. In 2007, Tudor launched the Hydronaut II, which borrowed from Rolex’s “maxi-case” design. Flatter, wider lugs and more pronounced crown guards formed a dominant part of the Hydronaut II’s aesthetic. Sadly, that version lost the enveloped-bezel shroud and much of the original Hydronaut’s charm. 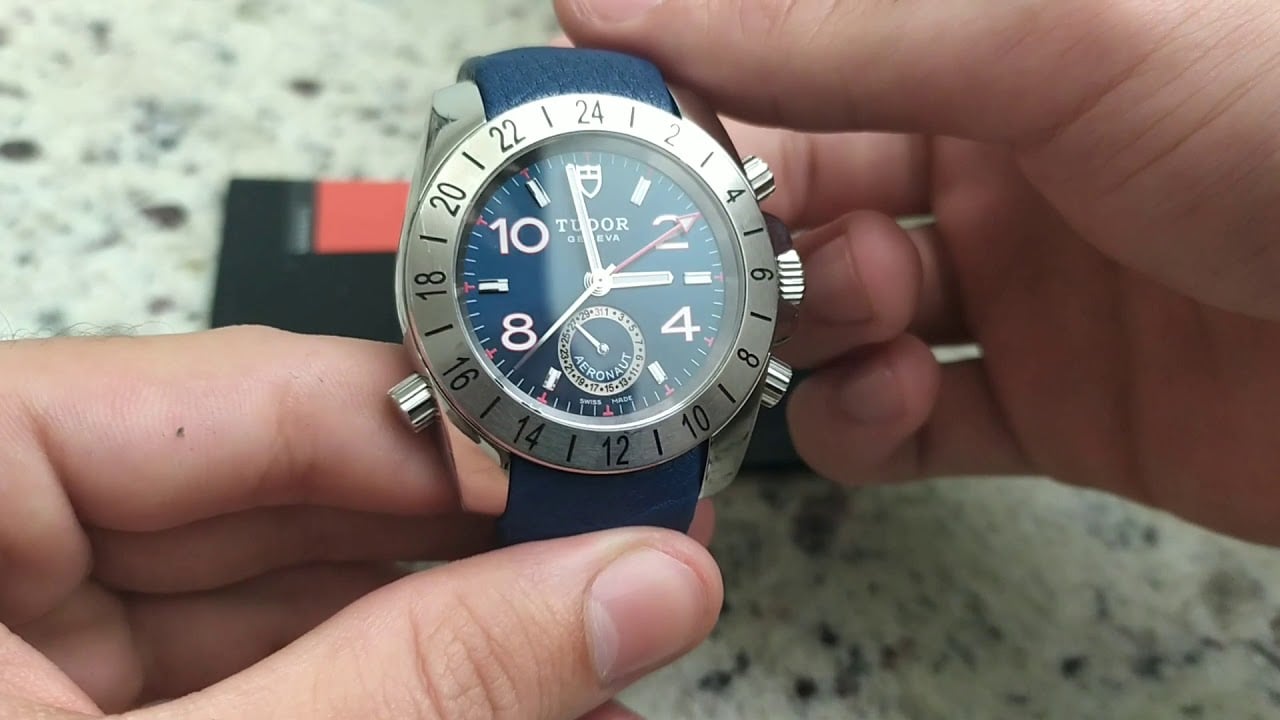 While many collectors see the Black Bay GMT as “the” Tudor GMT, it wasn’t the brand’s first foray into the dual-time complication. At first glance, one might assume that the Aeronaut 20200 was a chronograph due to the pushers adorning the case sides. That, however, is not the case, as this watch was a dual-time-and-date watch only. The wearer used the pushers to adjust the main hour hand. The pusher at 2 o’clock advanced the hour hand forward by one hour. The pusher at 4 o’clock moved the hand back by one hour. This format made on-the-fly time changes incredibly easy without the need to take the watch off one’s wrist or unscrew the crown. The final pusher at 8 o’clock advanced the date. The screw-down Triplock crown handled everything else — winding, time setting, and setting the 24-hour hand.

Leaning on the maxi case

The 41mm case featured wide, polished lugs and a fixed, brushed bezel with 24-hour markings. At this point, Tudor leaned heavily into the maxi-case styling that it debuted with the Hydronaut II. Ticking away inside was a heavily modified ETA 2892-A2. Tudor produced the Aeronaut 20200 in two main dial variations, each with a couple of different colors. The most well-known version had blue, black, or white dials with oversized Arabic numerals at 2, 4, 8, and 10 o’clock. The date sub-dial had the word “AERONAUT” neatly contained within it. Each of the large numerals had a contrasting red outline with matching red hour markers in the outer minute track. I think these were the nicest iterations, with the alternative a little peculiar in comparison.

How so? Tudor reverted to more traditional applied rectangular hour markers for the silver and champagne dials. The small “AERONAUT” branding was moved from the date sub-dial and plastered across the dial’s center. I’m not sure who at Tudor thought this was a good look, but there we go. In some ways, it reminds me of the late Virgil Abloh’s style in his Off-White brand, but with far less impact. 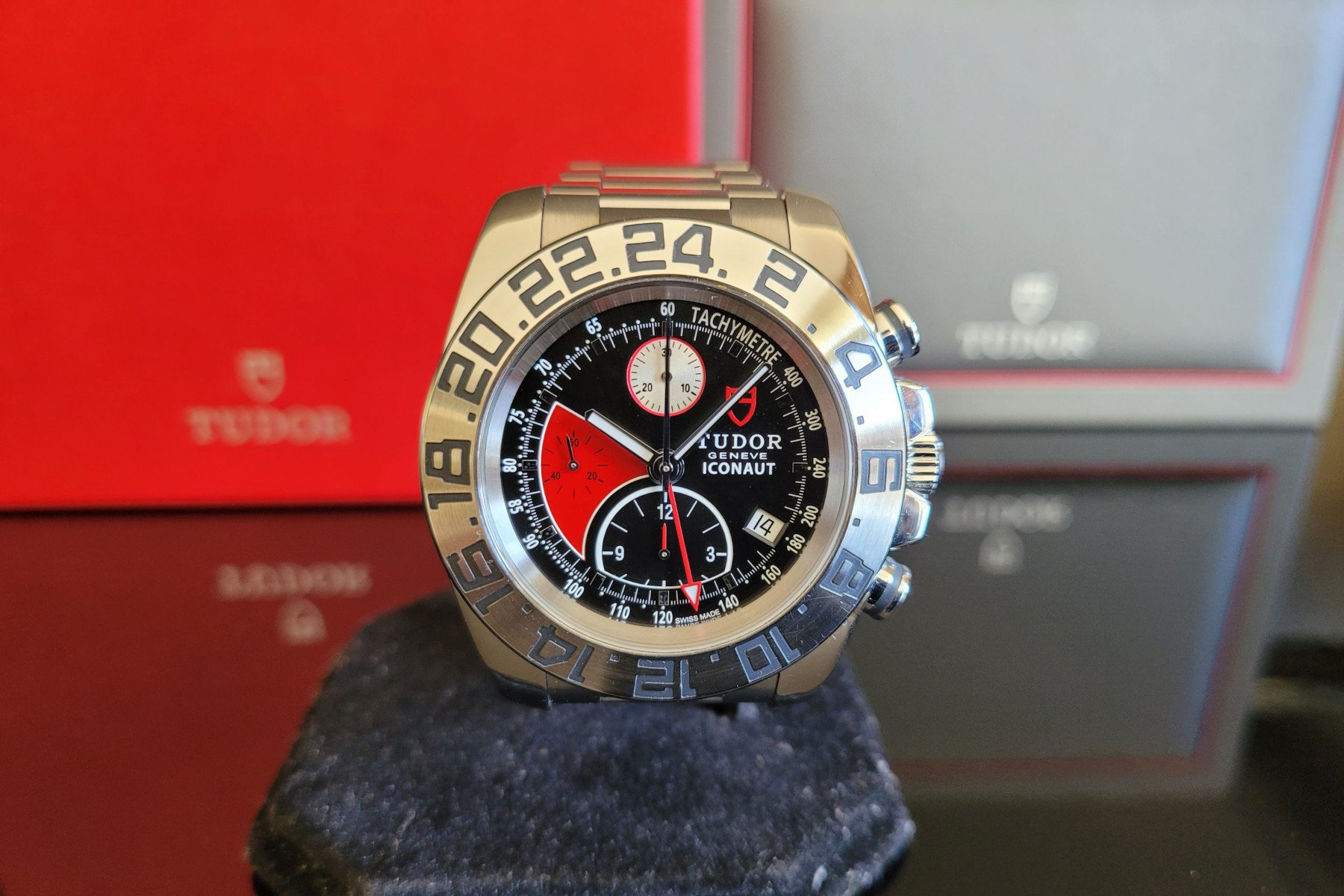 Tudor obviously liked the GMT complication and saw it as a key facet of tool watches designed for explorers. Released in 2008, the Tudor Iconaut reference 20400 was a 43mm sports chronograph and dual-time watch with a 150m water-resistance rating. This was Tudor’s multi-purpose tool watch. Looking back, the Iconaut 20400 perfectly encapsulates the watch design of the late ’00s with its big and bold design language.

Powered by the Valjoux 7754 movement, the watch’s profile followed the Hydronaut II and Aeronaut’s maxi-case look. A large, fixed bezel displayed oversized 24-hour numerals, just like the Aeronaut. The dial design is what made the Iconaut quite so striking. Each of the three sub-dials was quite different, but when combined, they were harmonious. The top sub-dial was a 30-minute register, always contrasting with the primary dial color. The black and gray dials used a silver sub-dial, whereas the silver dial used a black one. The bottom sub-dial was the elapsed-hour register, and with its partially cut-off lower portion, it reminds me of a speedometer.

The 20400’s sub-dial at 9 o’clock was perhaps the most eye-catching with its fin-shaped surround. Tudor referred to this as the “Deco” dial in its marketing catalogs. To my eyes, it’s what helps create a bit of a unique character and helps tie the rest of the different dial elements together. With prominent, bold branding in the space between 2 and 3 o’clock, the Iconaut was loud and proud. A date window at 4 o’clock and peripheral tachymeter completed the busy dial. While each sub-dial was a different size, their hands were equally sized, which helped unify them. 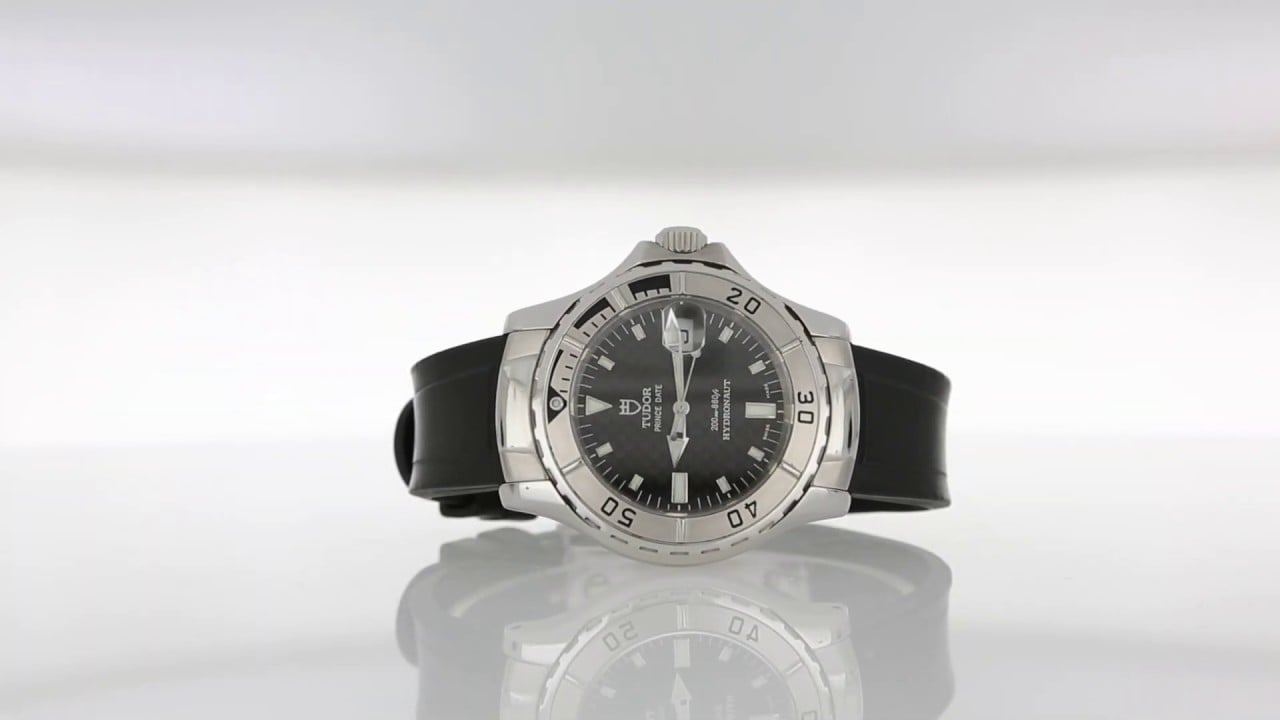 I miss the Nauts…

Each of these Tudor “-nauts” possessed a strong and bold character, and a quick search on Chrono24 reveals plenty of availability. With plenty of examples below €3,000, it’s possible to pick one of these quirky Tudors for far less than their modern siblings. In terms of specs and features, I believe that there’s a lot of value to be had if you’re not so keen on the current heritage-inspired designs such as the Ranger or the Black Bay Blue.

I expect that I may be in the minority here, but I think it’s a shame that these models died out. We’ve not seen the same level of creativity since, apart from perhaps the Tudor North Flag, but that has also since been discontinued. I don’t pretend to know anything of Tudor’s sales figures or plans, but it seems that Tudor’s fans (at least the ones opening their wallets) prefer the heritage-inspired designs that Tudor cut its teeth on. If this weren’t the case and watches like the North Flag sold well, I expect we might still see it alive and kicking but expanded/evolved like the Black Bay collection. I am merely speculating here, but it seems logical, no?

I’m keen to hear your thoughts. Do you like any of these watches listed here? Do you own any of them? As always, let me know in the comments!