Ever since Tudor unleashed their Heritage Black Bay in 2012, the watch community embraced it! I honestly don’t know anyone who has criticized this timepiece for any reason. This is a rare thing, as it seems everyone has his or her own opinion about a timepiece, positive or negative. Only a few watches out there seem to be regarded as great, offering a lot of bang for the buck, original, authentic and so on. The Tudor Heritage Black Bay is one of them. Today, Tudor introduces the Heritage Black Bay “Black”. Fratello Watches had the opportunity to go hands-on with this piece before the official introduction today, which gave us enough time to fiddle around with it and have it in our own photo studio. 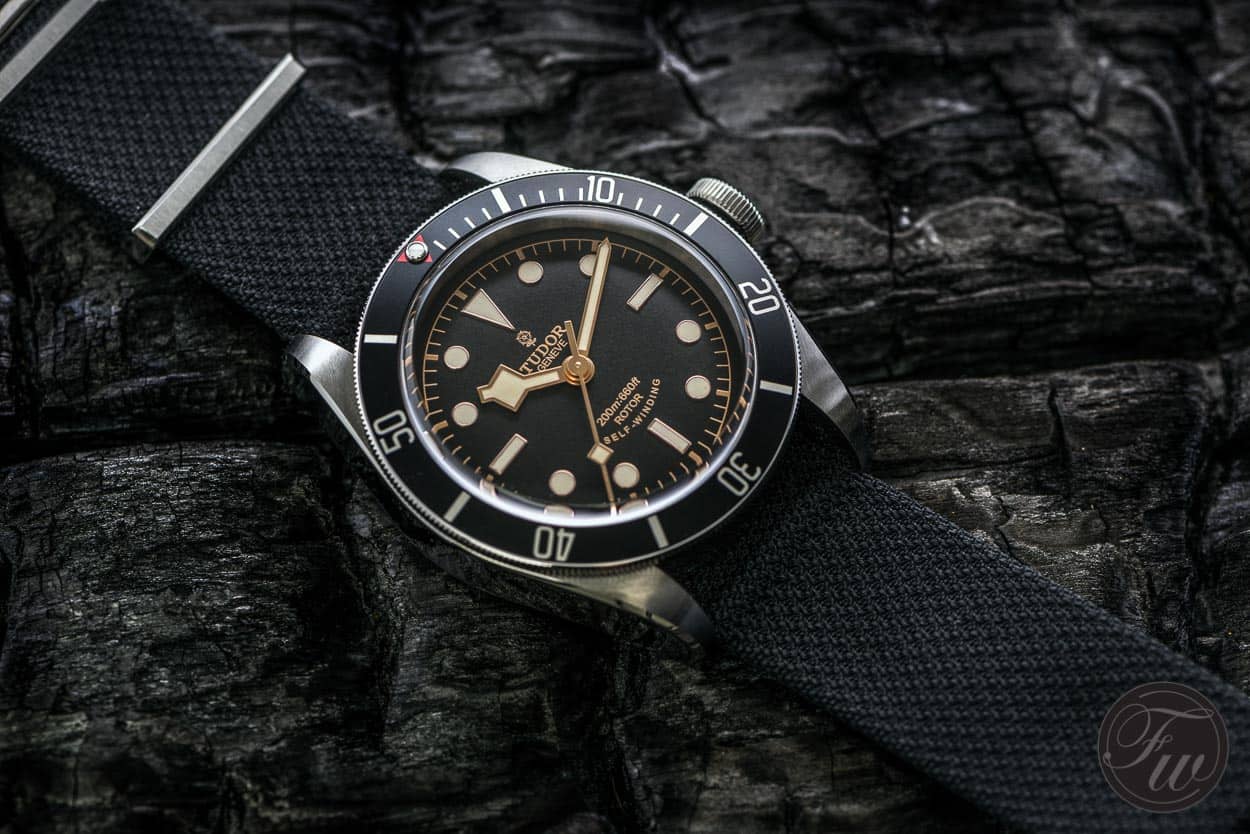 It is probably not a stretch to say this, but I think Tudor has a slight edge over Rolex when it comes to modern pieces. Why? Mainly the wow-factor and the fact that they are a) affordable and b) inspired by vintage models where Rolex doubled its retail prices in a few years time and is moving away from the good ol’ days with the use of Ceramics and PCL and just makes modern and unbreakable watches. The comparison to Rolex is non-existent really, as Tudor operates in a different price segment, has a different target audience and just does different things. It is for sure though (and Chronolytics data on watch consumers backs this up) that watch brands operating in the same price range as Tudor, hear their presence loud and clear. No wonder, as Tudor introduced some interesting models like the Heritage Chrono, Pelagos and this Heritage Black Bay to us in recent years. Historical influenced designs, solid movements and with interesting price tags. 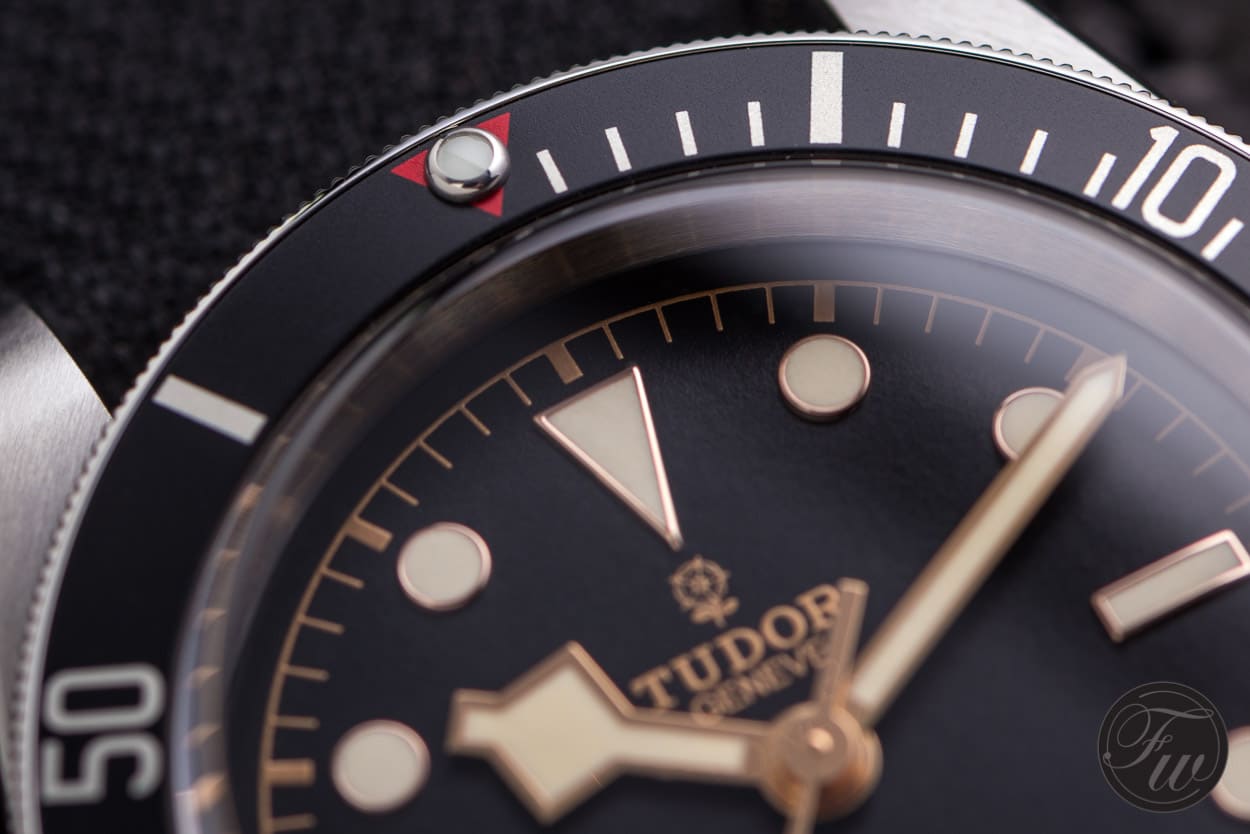 Now, let’s have a closer look at the new Tudor Heritage Black Bay “Black” but before we do that,  you have to know that the Heritage Black Bay was inspired by a couple of different watches from Tudor’s past. The overall design is derived from the Tudor Submariner 7922 (1954) and the big crown from the Submariner 7924, nicknamed “Big Crown” by collectors world wide. The hands are inspired by the “Snowflake” models, which we discussed in-depth in this article by Michael Stockton.

An overview on Tudor’s Submariner history can be found here, in this article by Balazs Ferenczi in which he wrote “The first Submariner from Rolex and its little Tudor brother were both developed at the same time. Of course, Rolex had to come out first with this new diver’s watch. Please bear in mind that at this point, Rolex had to go first simply because of the fact that they were the first brand and Tudor was the newcomer within Wilsdorf’s businesses. The first Rolex Submariners (the company launched 3 different models at the same time: the ref. 6200, 6204 and 6205) were introduced in 1953 and a few months later, in 1954, the Tudor Submariner followed. This model was given the reference number 7922 and it was almost identical to the Rolex Submariner. The watch set the major design elements for future Tudor Submariner models, it had a self-winding movement of course (Fleurier caliber 390) and was water resistant to 100 meters.” 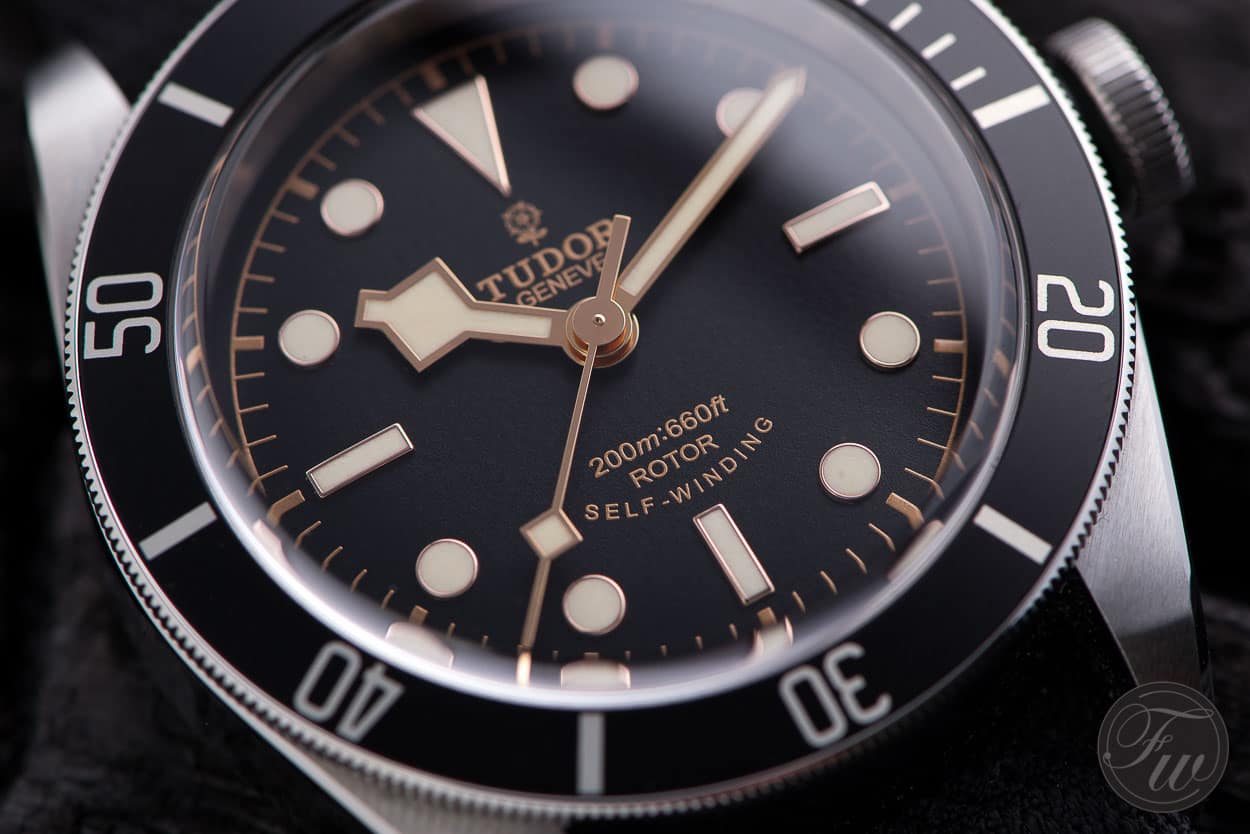 The Tudor Heritage Black Bay “Black” combines the matte black dial and patina-like gold printing on the dial and hands (like the Burgundy red model) with a matt black uni-directional bezel. At “60”, there is this small red triangle on the bezel with a luminous dot. This latest addition to the family comes closest to the original Tudor Submariner models in terms of design afaik.

Without hesitation, I would say that this is the Tudor Heritage Black Bay model that I would like to own out of all three available models. Perhaps because it is the most classic configuration of the three, but it is also the configuration that I am sure will not start to bore me a couple of years from now.

The Tudor Heritage Black Bay “Black” model will be available with a stainless steel bracelet as well as on an aged leather strap. As always, there is an extra fabric high-quality strap with this “NATO”-style look & feel. Tudor uses the 2824 movement (based on ETA’s solid caliber 2824 movement) and decided not to use their own new in-house movement that we showed you here and here.

The price will remain the same as the Heritage Black Bay Burgundy and Midnight Blue versions. 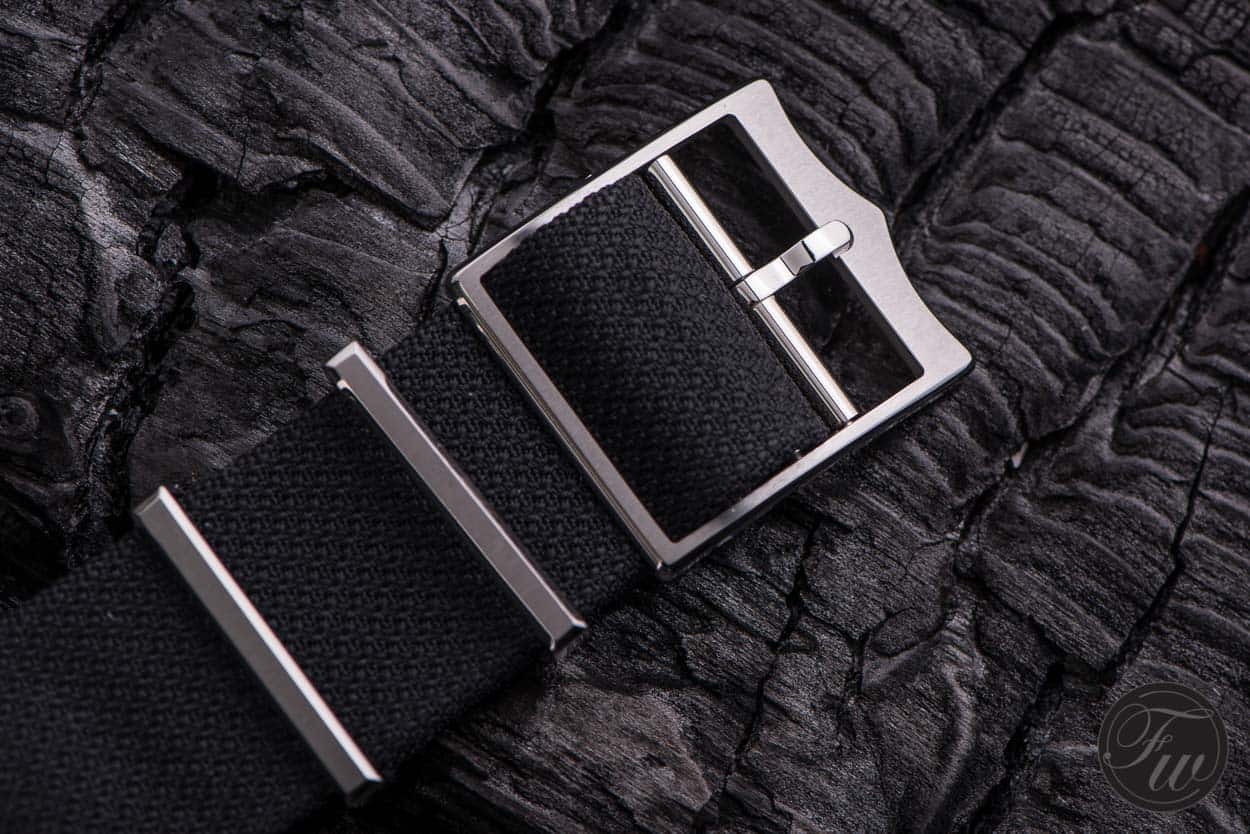 More information can be found on Tudor on-line.