It is not every day you get to meet a world-record making explorer. Victor Vescovo is the first human who has climbed the highest mountains, skied to both the North and South poles, and now reached the deepest depths of the planet.

Vescovo has just returned from the Five Deeps Expedition, the unprecedented endeavour to reach the bottom of all five oceans in a manned submersible. His ship is passing through our straits and docking in London for two days. 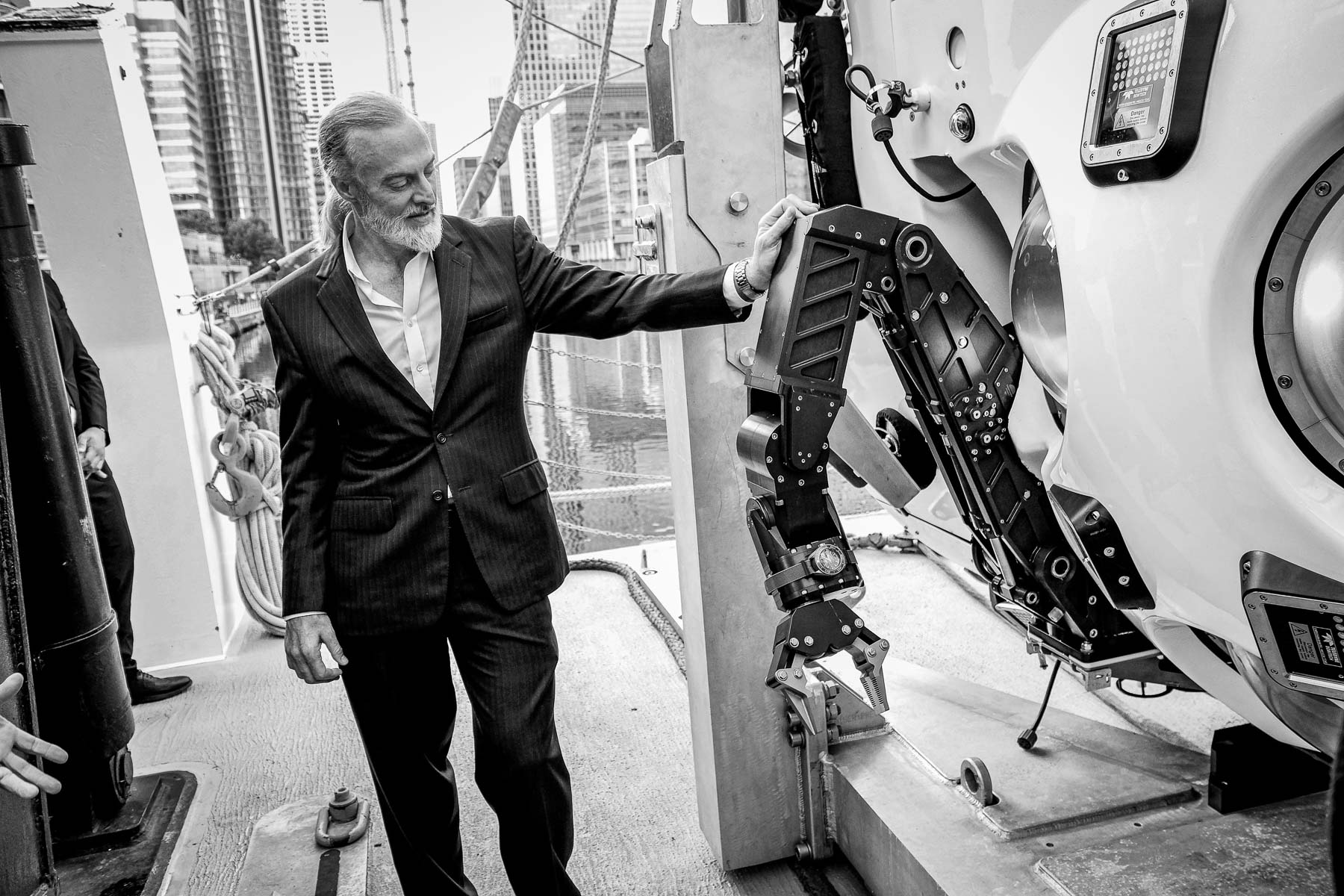 On board is the man himself, his expedition team, and the submersible that made the historic dives. On its external robotic arm, strapped the Omega Seamaster Planet Ocean Ultra Deep Professional timepiece that descended together.

Omega developed the watch specifically for this extreme purpose, intending to transfer the know-how gained from the project into production Seamasters. Without repeating the vital stats, Mike has covered the ingenuity, tech specs, and fun facts of the Ultra Deep: HERE, and followed up with his impressions on the watch at the unveiling event in London: HERE.

My fascination with extreme pursuits and adventures, those that push the frontiers of human minds and capabilities, is the reason I am attracted to independent watchmaking. It also makes me the best man (eh, woman) for the job, as I smugly congratulate myself, to step in for my fellow Fratello, and pick up where Mike left off. 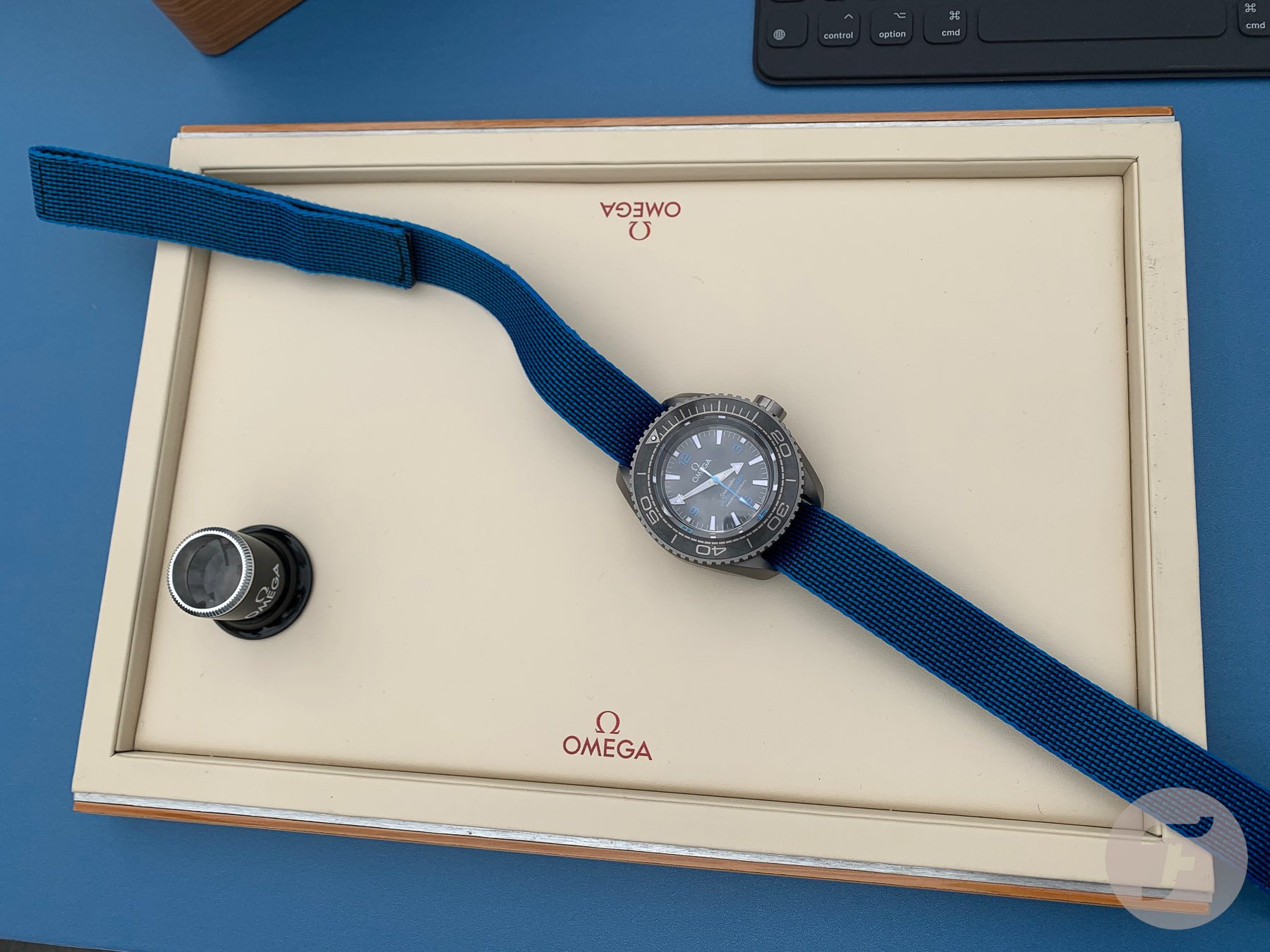 The Five Deeps Expedition was a $48 million project, conceived in 2015 and funded by Vescovo himself. The years-long endeavour included the build of DSV Limiting Factor, described as the world’s first two-person, titanium-hulled submersible that can be reused, and fully tested to 120% of full ocean depth. The whole diving system has the potential to advance marine science for decades to come. 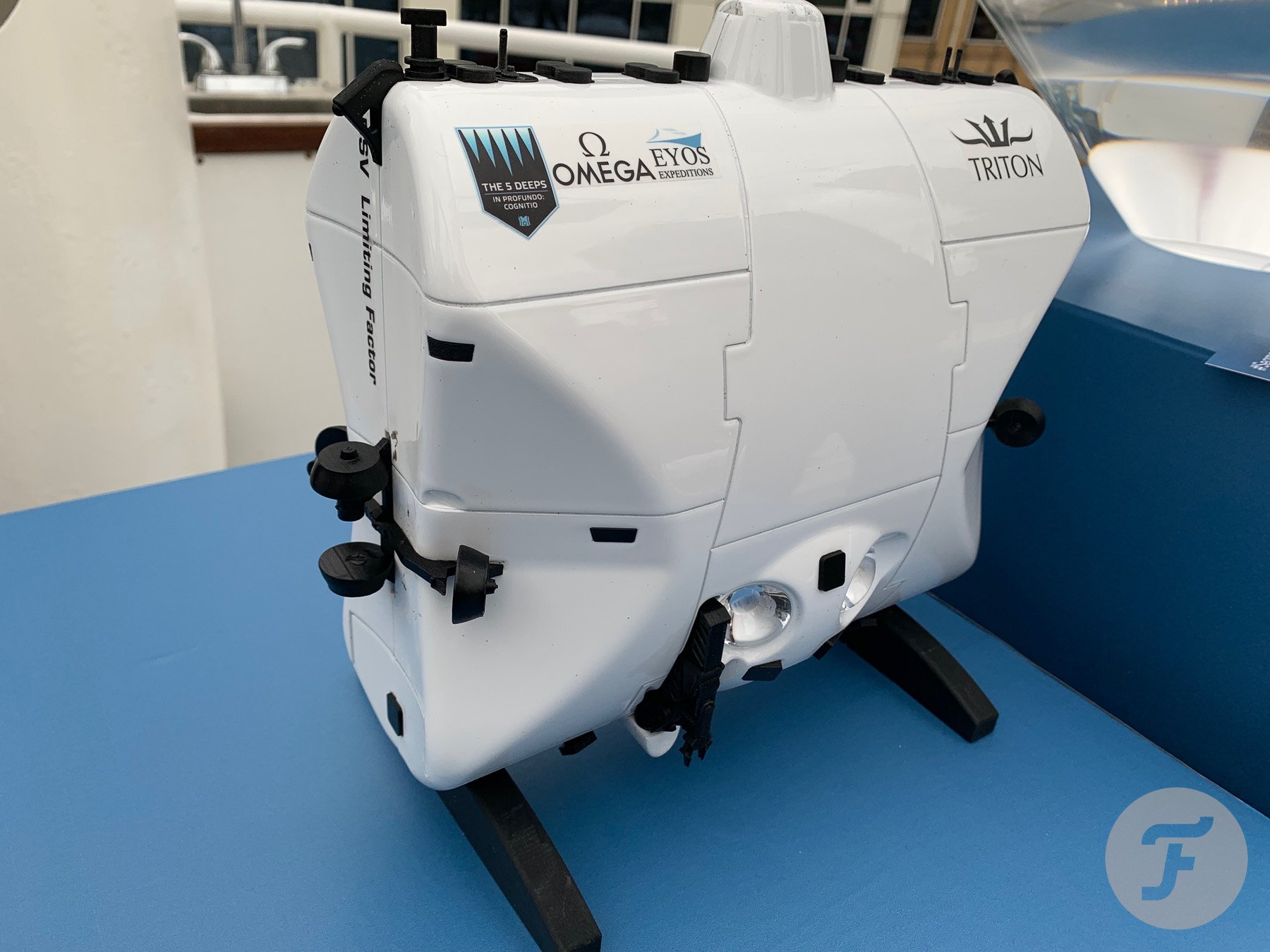 The ocean depths remain some of the least explored and remote places on the planet. The most sunken of all, Mariana Trench in the Pacific Ocean, is deeper than Mount Everest is in height. After travelling across 47,000 miles and completing 39 dives, the expedition has produced detailed sonar mapping of the deep sea floor at the five deepest spots in our oceans, for the first time in history. The landmark odyssey will be made into a documentary for Discovery Channel and aired in 2020. 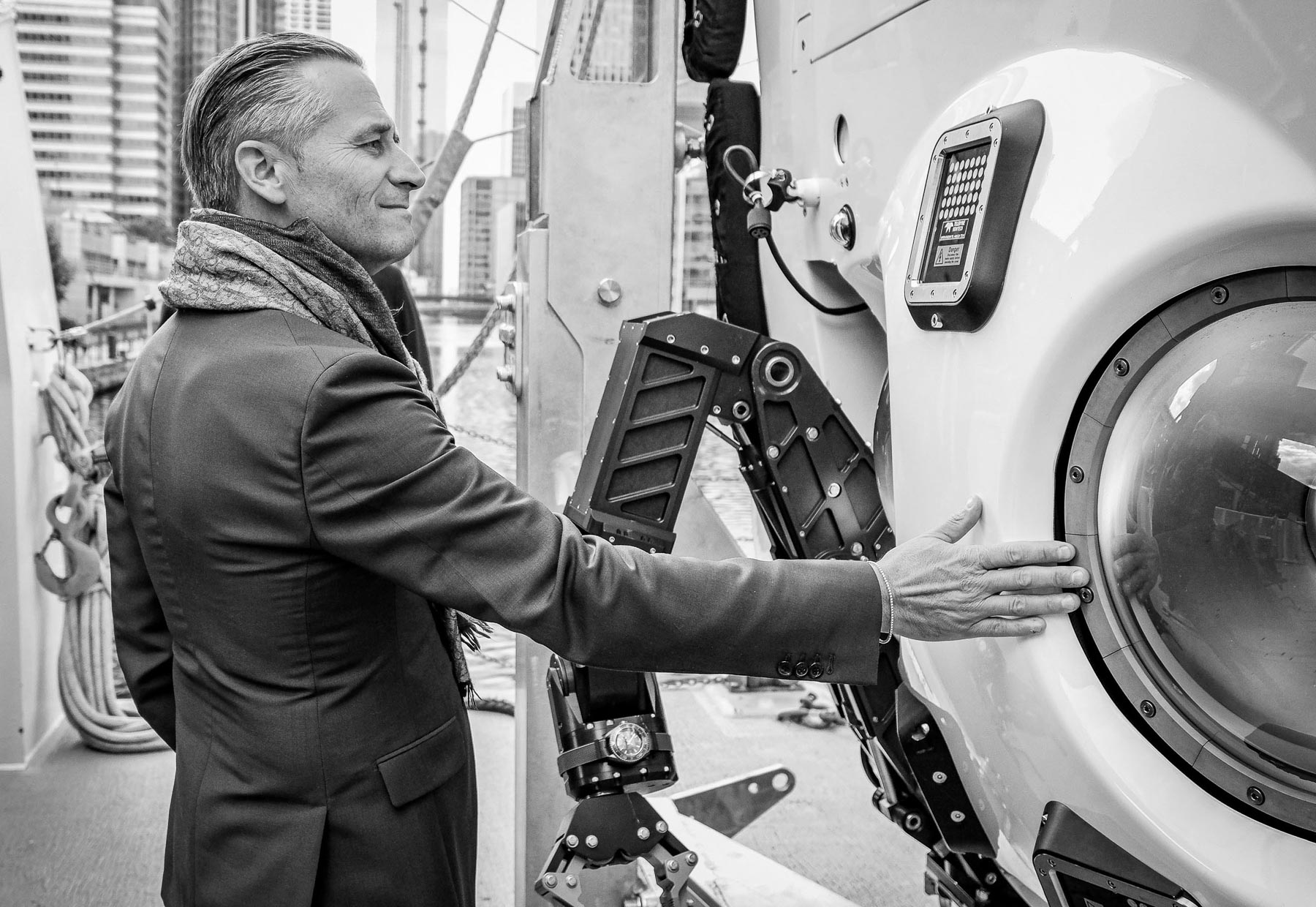 A feat like this certainly would not go unnoticed to global media and the world. Omega was quick to get behind when Vescovo came calling. “8 weeks or so before we dove the Challenger Deep (the deepest pool of the Mariana Trench), Omega asked to put a watch on the outside of the submersible. And in record time, Omega was able to design and fabricate a watch from the same material as the sub was constructed of, the same titanium. They built the Ultra Deep watch and we took 3 down to the Challenger Deep,” Vescovo says.

Vescovo describes how he looked out of the sub’s window to see the Ultra Deep steadily ticking round.

Producing a professional divers’ watch is all in a day’s work for Omega, but to create one to perform at such depths required an entirely different level of engineering prowess. Impressive as it was, there was not the slightest sense of show-off as Gregory Kissling, Head of Product Development at Omega, talked about the development process. The triumph was more a case of putting the best heads together, with diverse expertise, to overcome an extraordinary challenge. For my inner nerd, it was music to the ears. And it was clear Omega did it because they could. 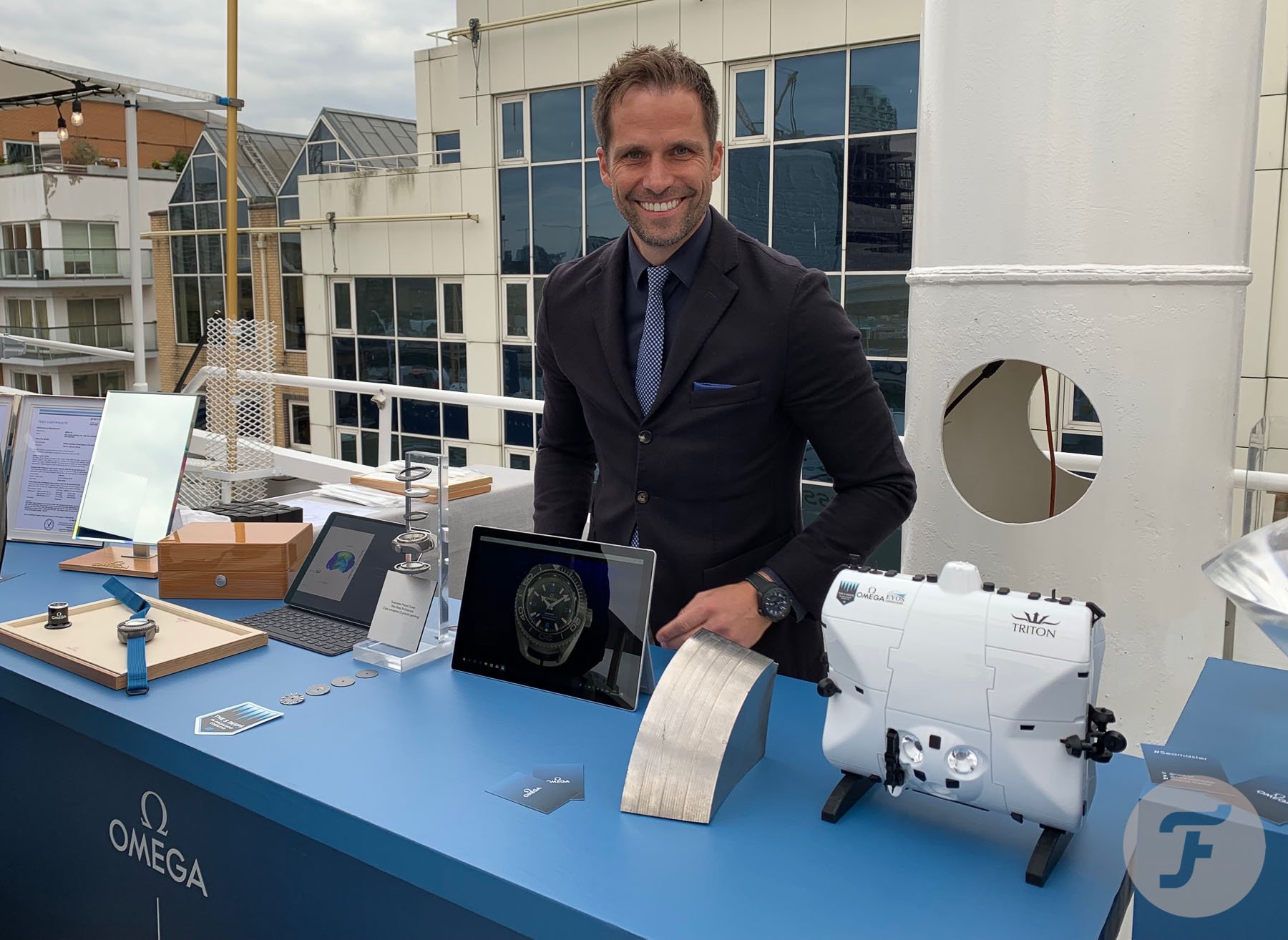 The engineering marvel lies in the case construction, which serves to withstand pressure at 15,000 metres, and enables Ultra Deep to be professionally certified as the world’s most waterproof watch (beating Rolex’s 12,000 meters). To substantiate real world performance outside of the lab, there was only one way. Omega strapped two Ultra Deep to the Limiting Factor, one to a data-gathering “lander” to make the descent. The lander was stuck at the bottom of the Challenger Deep and recovered after two days. Along with it, the Ultra Deep was rescued and, on sufficient power reserve, still ticking around perfectly.

With a naval background, Vescovo was fully trained to pilot the sub. He made multiple trips to the ocean floor, and set a new world record for the deepest solo dive, with the Ultra Deep, to the bottom of the Mariana Trench in May 2019.

Did anyone utter the word “one-upmanship” between Omega and Rolex? For the former now has a watch that has proven to function for 2 days, reaching the maximum depth of 10,924 meters / 35,840 feet, beating the latter’s record in 2012 from diving the same area with Hollywood director, James Cameron. A public dispute erupted, as Cameron went straight to The New York Times to openly challenge Vescovo that he could not have dived deeper.

Panic. What do we call the Ultra Deep now, if not one that made the record-breaking dive?

I quickly reviewed my recordings of the visit to the ship, inquisitively querying the crew. Both Cameron and Vescovo used sonar to calculate the depth of their dives. Cameron says it was a plain, but Vescovo found features with sonar, and creatures during their dives. And if you have seen the footage of the dives, and heard it directly from the expedition team with supporting data and images, which I did, Vescovo’s case is evidently compelling. 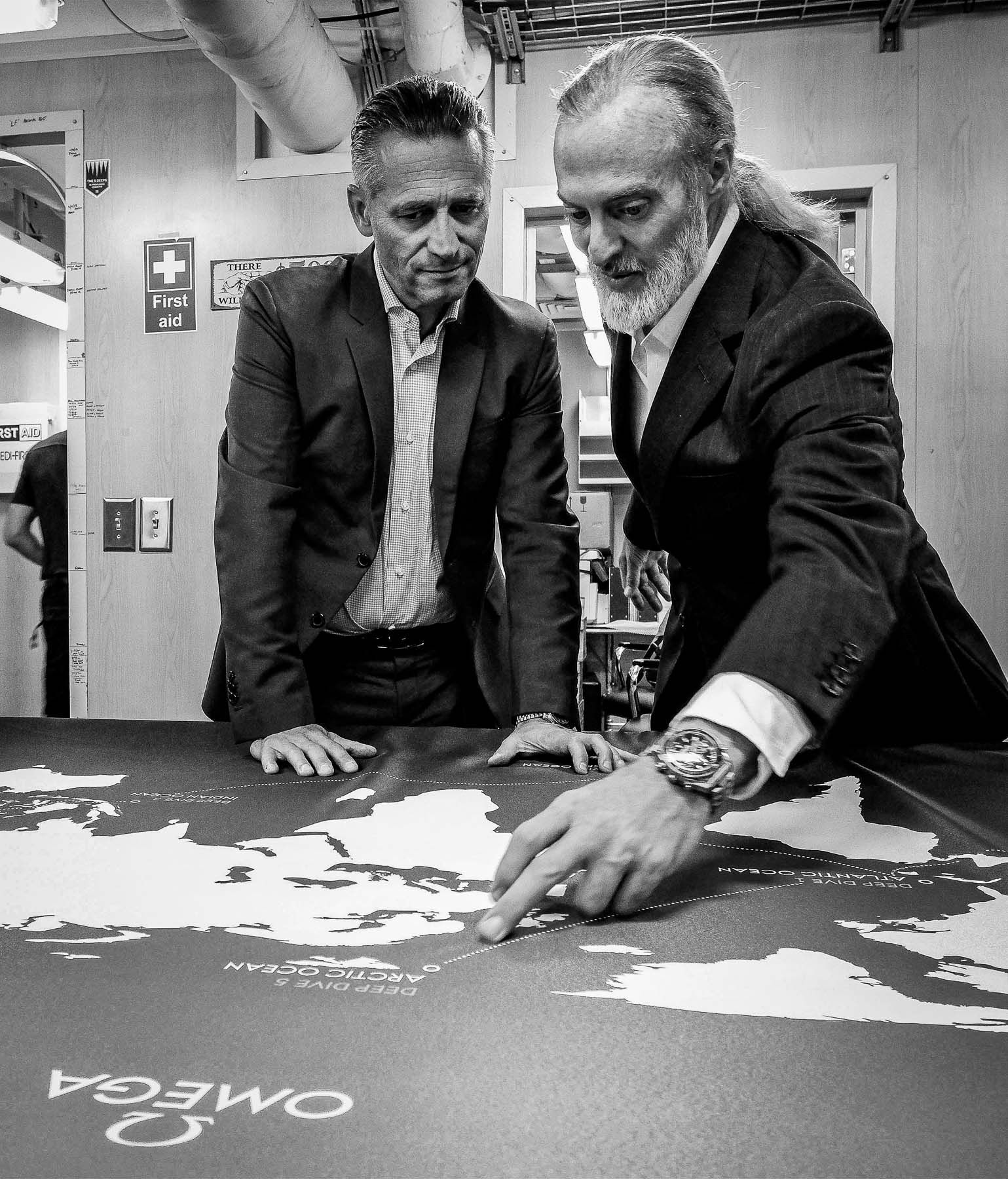 “To precisely target where to dive the submersible, so that we wouldn’t have to do it again in 10 years, we used the most advanced civilian sonar system on a ship, to do three-dimensional multibeam mapping. We identified the deepest point and built a bounding triangle to dive in, to make sure we got to the deepest point. When we went there, as did Cameron’s expedition in 2012, there was more thoroughly mapped multibeam sonar imagery, and ours is much more advanced,” said Vescovo, prior to the dispute.

Vescovo has been rather gentlemanly avoiding a feud, while asserting that he can only stand behind the data.

Omega maintains everything that has been communicated about the Ultra Deep. 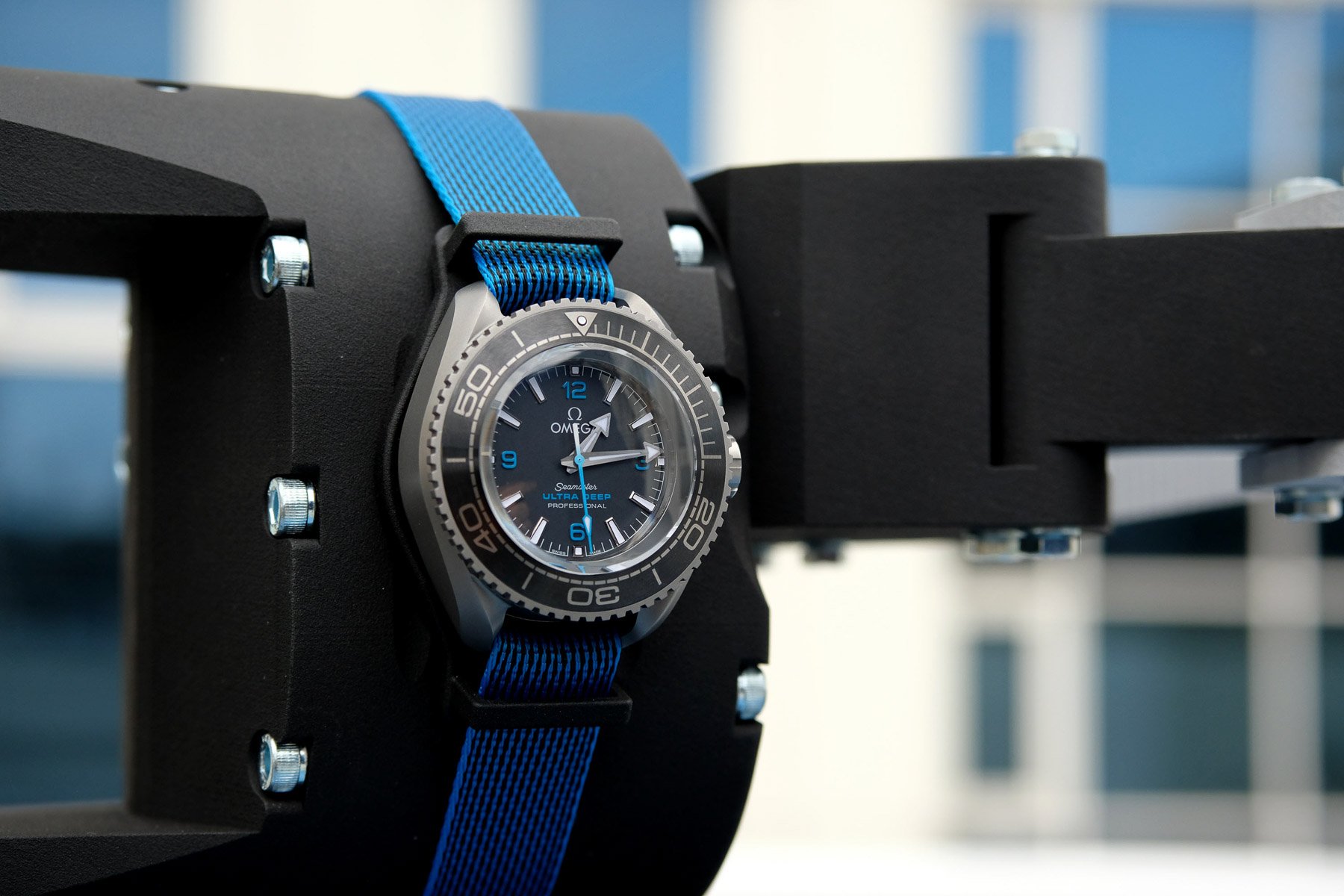 Make no mistake. The watch is not a production watch for the wrist. Rather, it charts a real milestone in watch technology. And it does echo a landmark accomplishment on the 50th anniversary of the Moon watch.

Record-breaking or not, this is a watch with proven real world experience to land at the deepest depths. It is not one of those watches that have artificial water resistance that is certified in a lab and will never be useful. The Ultra Deep, like the Five Deeps Expedition, is no work of fiction. 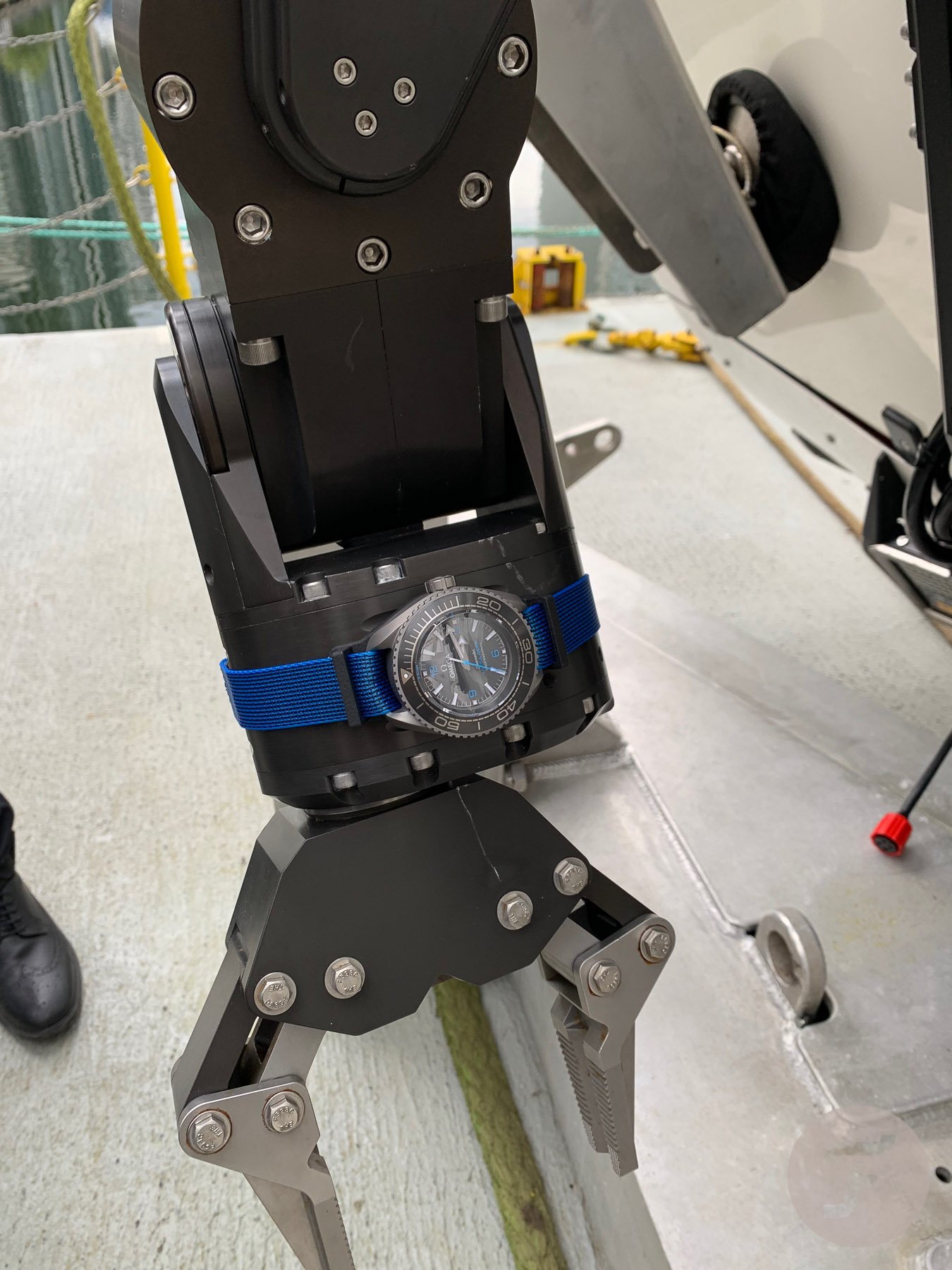 Vescovo has vowed to return in 2020 to set the record straight once and for all. Omega cannot comment if they will be a part of it at this point.

Will they, or won’t they?

Special thanks to President and CEO of Omega Mr Raynald Aeschlimann, Mr Victor Vescovo, and the teams at both Omega and Five Deeps for the up-close and personal presentation of the watch and the expedition.