Are you willing to overcompensate for $5,419?
Michael Stockton
comments 0
Share

Welcome, friends, to Wrist Game or Crying Shame, where we ask you to vote on whether a watch is worth its salt or simply worth what salt is worth.  This week, we’ll go (O)mega with the Omega Ploprof, but first… 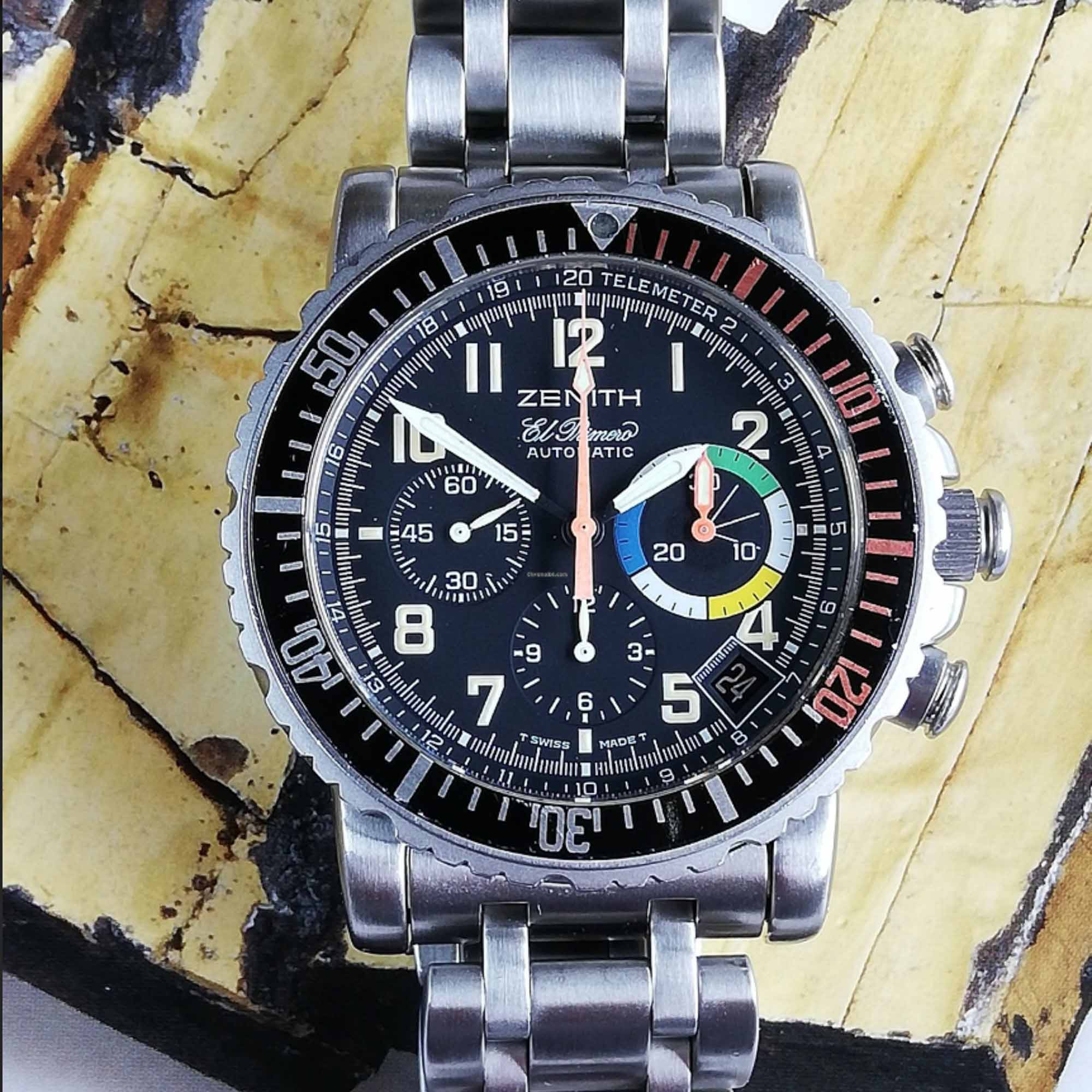 Somewhere over the Rainbow, way up high…  Well, you folks were clearly high on a little Zenith Rainbow because this child of the 90’s soared to a colorful 61% Wrist Game win at time of publishing.  We received a lot of colorful responses from folks who lamented the 60’s British/French/Italian car reliability of these watches, but a majority of you felt strongly enough about this colorful character to give it la victoire.  Ah, and we received some cranky responses about my deriding of the basic black and white version.  Yes, it is a nice looking watch as well, but it’s about as Rainbow as the picture on my grandmother’s old black and white Sears TV.  So, get over it and crack open a cold Bud Ice.  And now…the Omega Ploprof. 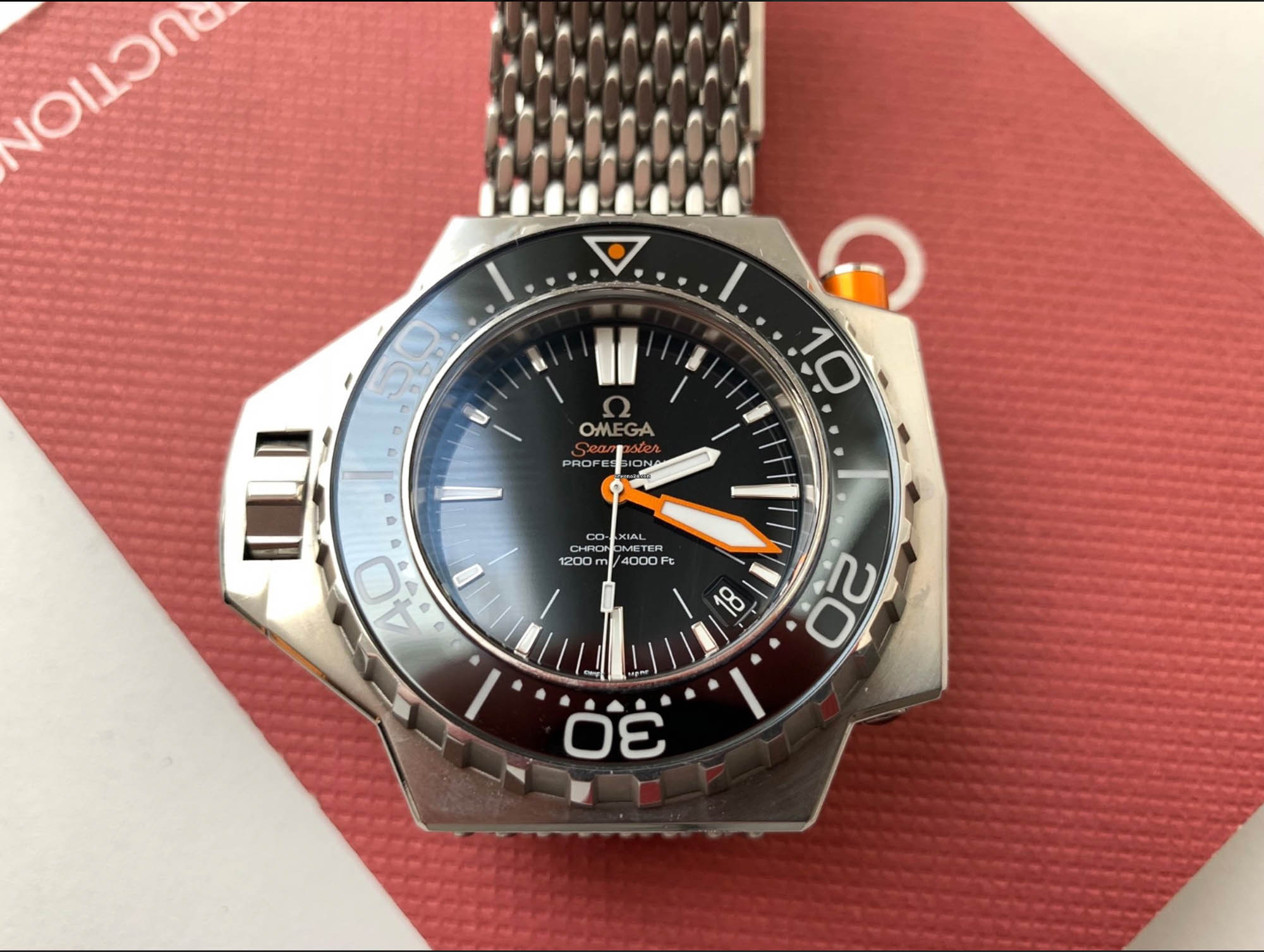 Before I risk offending any diehards out there, I must tell you that I am a real fan of the Omega Ploprof.  Now, I’ll get on with some troublemaking.  The Omega Ploprof is, at once, probably the most ridiculous watch on this planet and something that I’m very thankful exists in this all-too rational world.  Well, existing is a bit of an overstatement because today’s modern steel Ploprof has gone the way of the bulk of German customer service, which is also known as “extinct”. 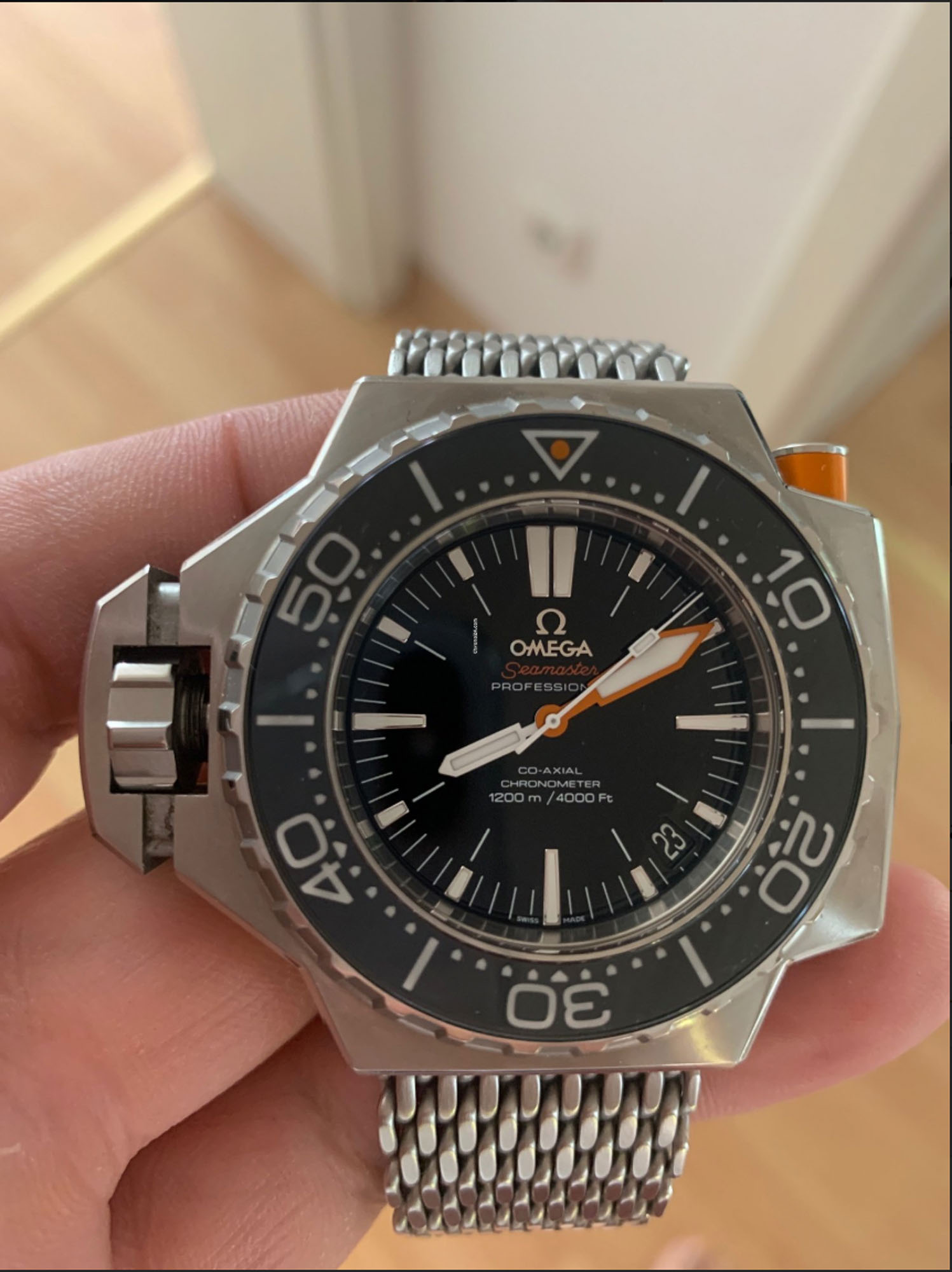 After 10-years of production (the Omega Ploprof was reintroduced in 2009), Omega decided to cull the herd and pull the plug on the steelie with black dial (titanium still exists).  That’s a shame because this version of the watch, although I guess not a big seller, was the most true to the original concept that first debuted in 1970 as the Ploprof 600.  But then again, one shouldn’t be too surprised about the big diver’s demise because, as I said, it is one ridiculous piece of kit. 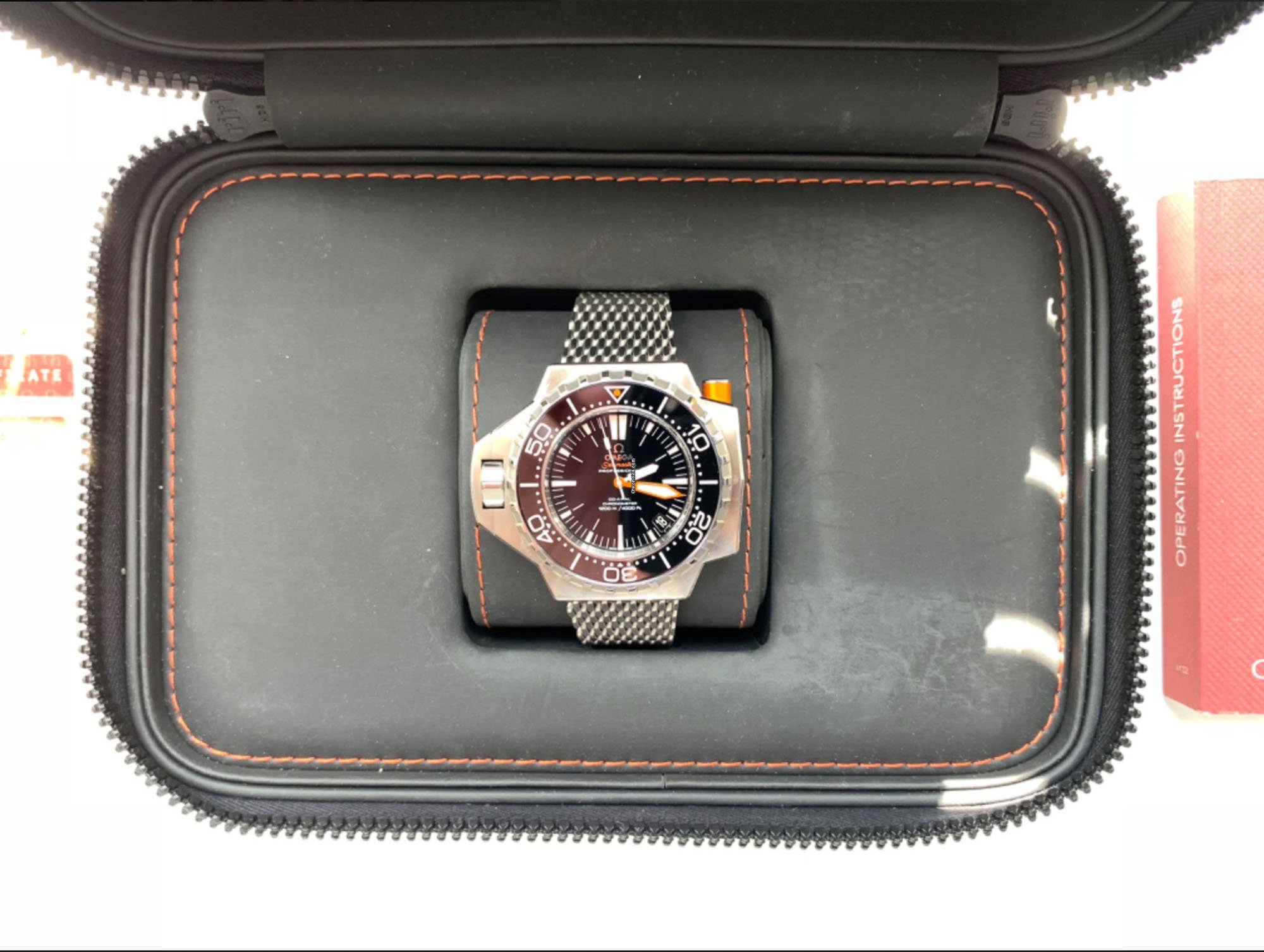 I have all sorts of competing images when I think about the Omega Ploprof.  Shape-wise, it reminds me of the Millennium Falcon, but I’m not so sure it could pull off the Kessel Run in less than 12 parsecs.  It’s also a watch that speaks of overcompensation.  I mean, just look at the thing…it kind of sports a look that only a mother could love, but it is somehow lovable.  And despite a bunch of Agnelli wannabes strapping their massive 48 x 55mm Ploprofs over the sleeves of their dress shirts, the crazy thing is that these watches actually fit the naked wrist far better than they should.  The 48mm part of the equation is the obvious reason. 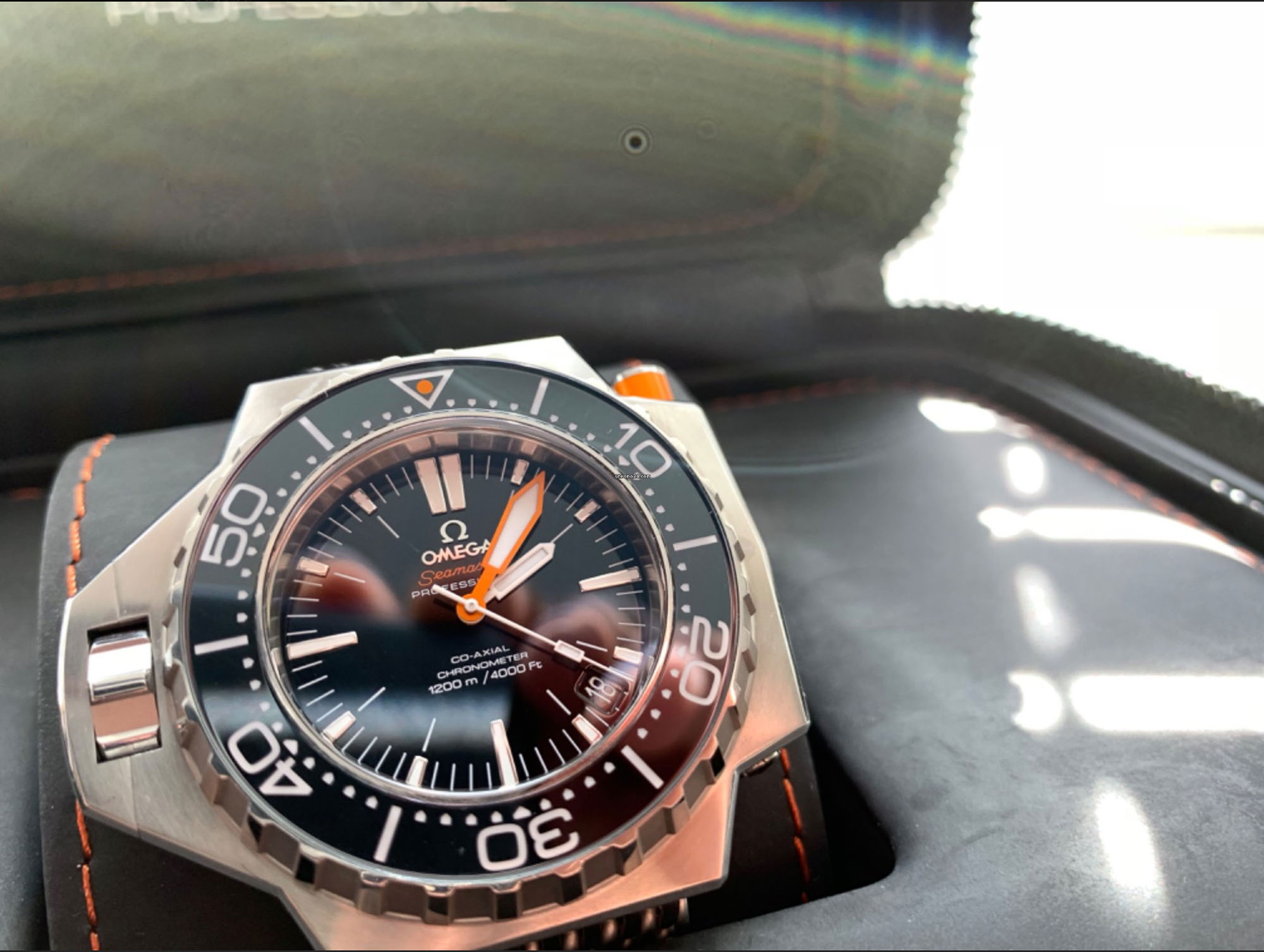 But as an everyday wear, the Omega Ploprof faces tough battle against far more practical leviathan fighters out there.  Heck, some of those competitors are from Omega’s own catalog.  And at a retail price of 8,000 Euros, you either require the arms and lifestyle of someone such as The Rock to wear this everyday or are just up for some guilty spending. Ok, if you’re reading this site, there’s about a 100% chance you fall into that last bucket.  But the last image that comes uninvited into my mind about the Ploprof is the thought of leathery old divers such as Cousteau waltzing around in scratchy wool sweaters, not enough bathing suit, a beanie and a US Diver’s knife on a rubber strap around the calf.  I guess that last mental picture is what initially drove most people to cough up the cash and buy the watch analogy of bringing a Howitzer to a knife fight. 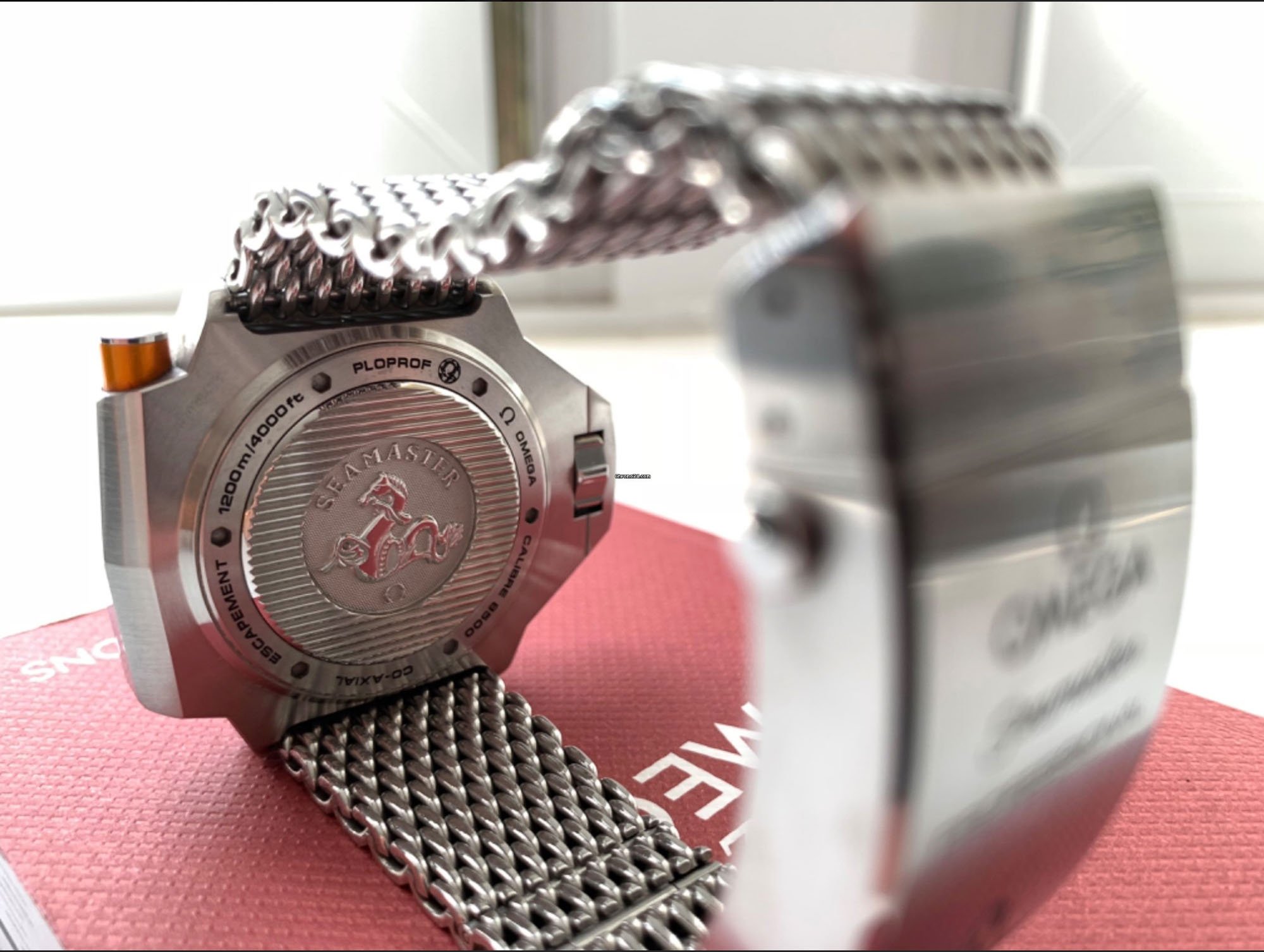 A funny thing happened this past Summer.  Robert-Jan scored a nice deal and bought a steel Omega Ploprof.  He then proceeded to bring it on his holidays in France.  Let’s hope he didn’t wear any inappropriate bathing attire, but let’s also hope he wore some bathing attire.  Whatever happened on the coast of France, it seems that RJ made the Ploprof one of his most worn watches this Summer.  Let’s hope it stays that way and he doesn’t decide to boost it like today’s seller. 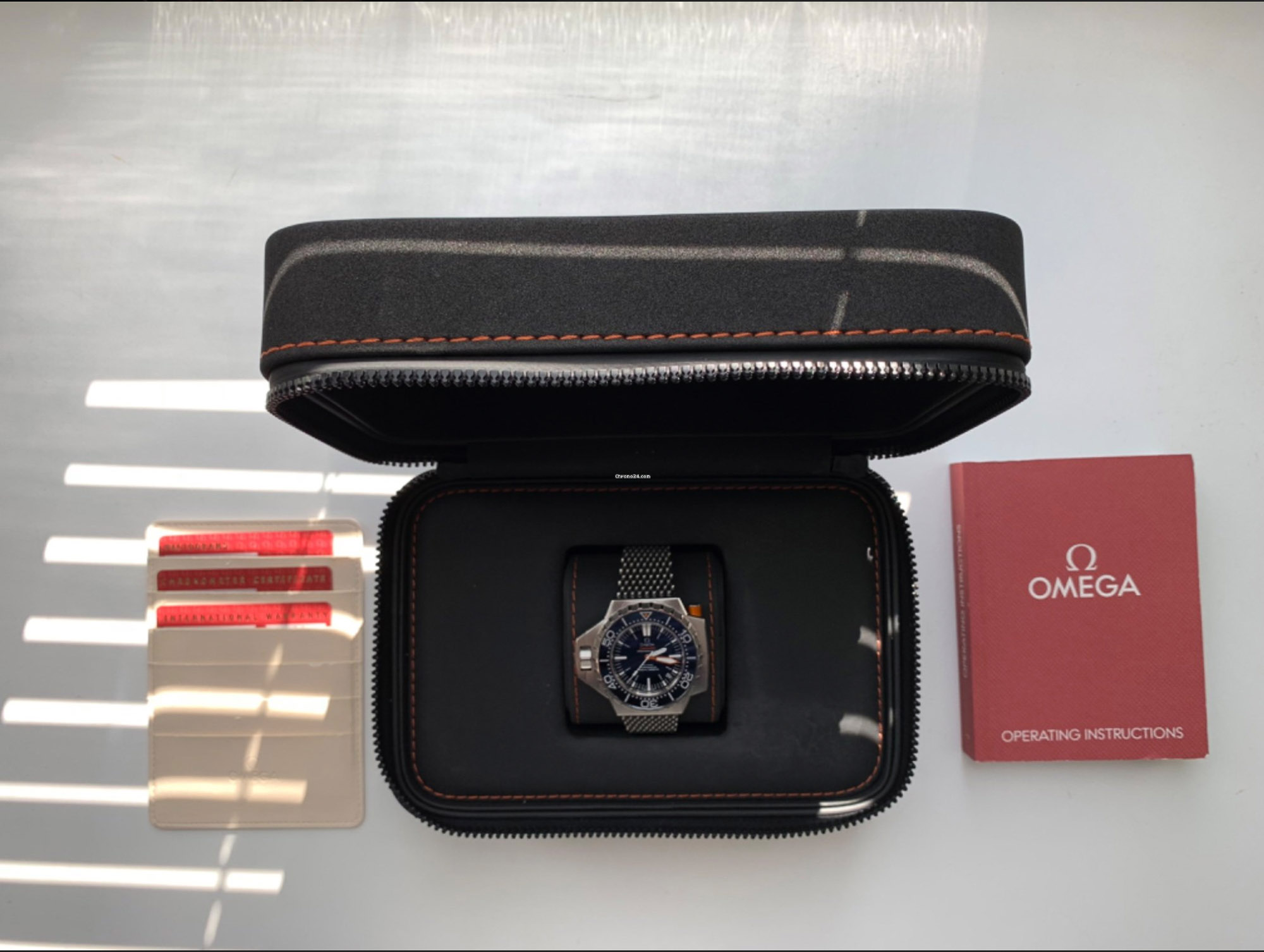 Today’s steel Omega Ploprof comes via Chrono24 and hails from the country where Sunday window shopping is a national pastime: Germany.  The owner took a host of sweet photos of his 2011-ish Ploprof that seemingly comes with all the kit (the watch and photos are the property of the seller).  It’s even on the desirable mesh steel bracelet in lieu of the less expensive rubber strap.  Inside this kraken is Omega’s co-axial chronometer-certified 8500 automatic.  Other niceties are a well-hidden helium valve on the opposite side of the bezel lock.  That valve will undoubtedly aid you as you participate in the all-too-common activity of saturation diving at a maximum of 1200 meters.  The cool thing is that this exceptional-looking piece comes in at $5,419 and that represents a healthy discount versus retail .  The question is whether you think this Ploprof is worth rescuing and letting loose in the ocean or if it belongs at port.