Way back in the late 1950s, somewhere in post-war Germany the original owner of this vintage Tissot “Calatrava”, Werner Schönhalls, received the watch as a communion gift from his grandfather. He was clearly someone who very much cared for and valued his possessions, so the value of the watch and its meaning made it far too precious for him to actually wear it.

Though the watch did spend some time on his wrist, it was not long until Werner decided to keep the watch safe by placing it into a box in a drawer. As fate would have it, the watch would spend the better part of 50 years in said box. In 2019, Mr. Schönhalls decided to sell this watch, and I was lucky enough to be the first to notice it. Up for grabs on eBay Kleinanzeigen, I quickly sent a message gladly accepting the asking price of €180.

I know what you’re thinking. Yes, the price included shipping costs. No, but in all seriousness, if you think about what kind of watches can normally be had for under €200, the options are quite limited (the good ones, at least). When you factor in the automatic movement and solid 14k gold case, and its close to new-old-stock condition it quickly becomes quite an impressive find.

As I’ve previously mentioned in this series of articles highlighting the watches in my collection, my position as a student in his early days of watch collecting meant that my budget was nonexistent. This had me hunting for the best deals around. Having recently seen one of these sell for just under €1,000 assured me that this was indeed one such deal. 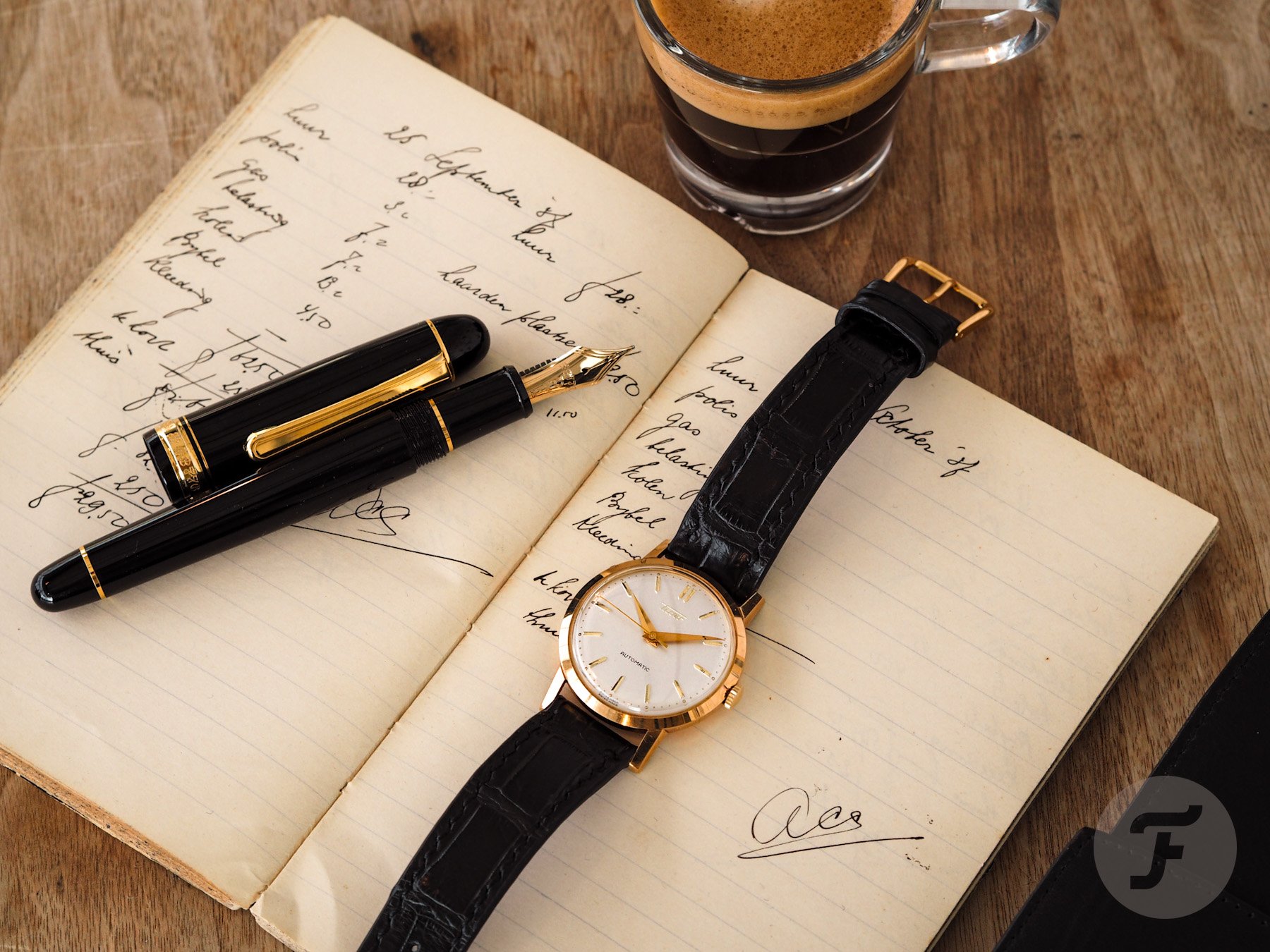 There’s Gold in them thar hills!

Collecting in this way over the course of four years meant that I eventually got lucky. You can see some of the other watches I managed to pick up for a fraction of their usual prices, such as the €60 Omega Genève ST 166.0190, or the €100 Tissot Seastar Navigator chronograph. I found that vintage watches were the way to go for me. They were almost always cheaper than modern watches, let alone new modern watches. Plus, there was the added benefit that sometimes, those who list these watches up for sale, as was the case with Mr. Schönhalls, don’t necessarily have the right idea in terms of value. Finding those rare listings requires a lot of time, patience, and scrolling. But every so often, you’ll find gold nuggets buried in the vast wasteland of unremarkable watches. 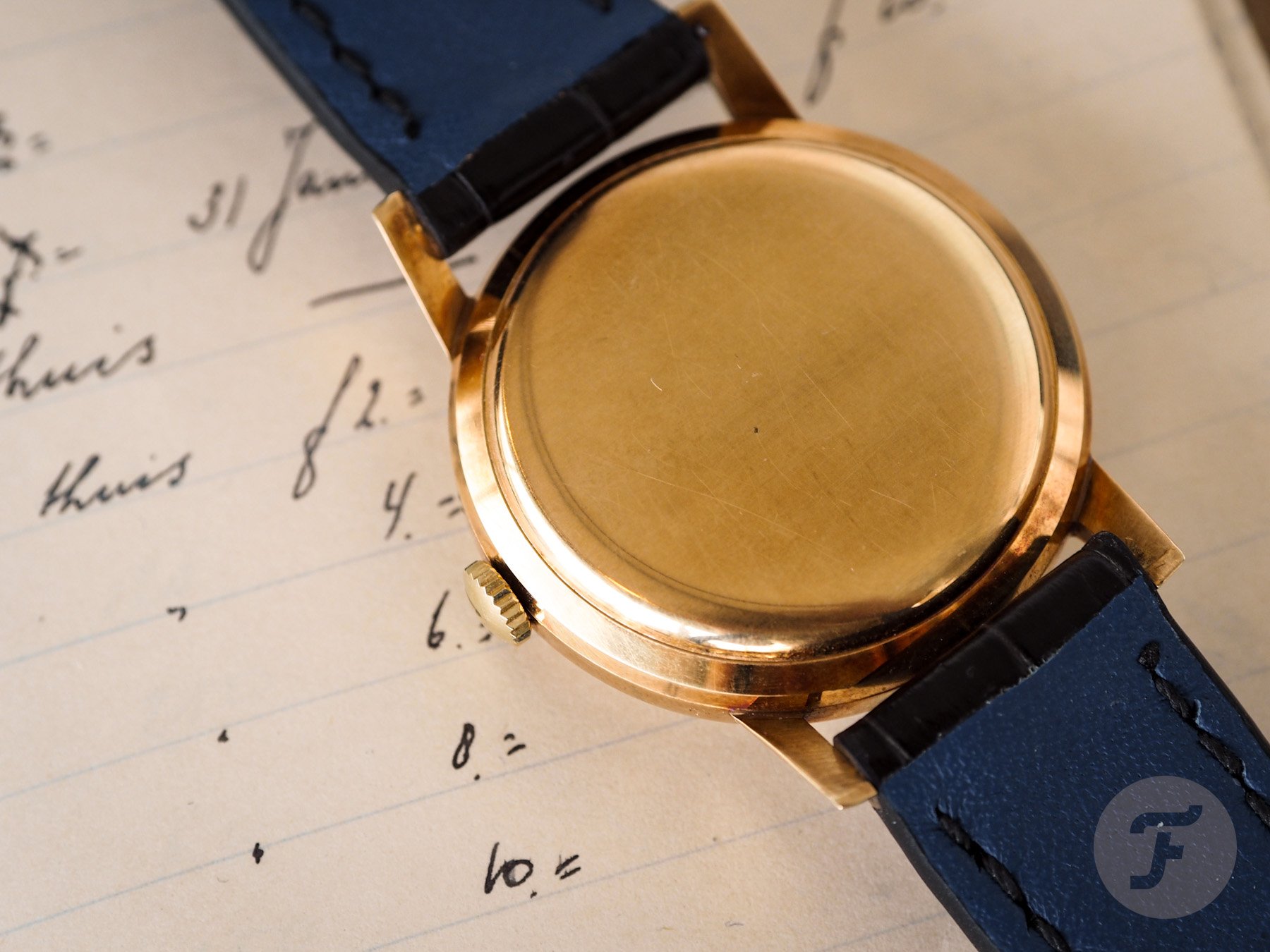 One of the few sparkling gold nuggets (quite literally) that I’ve been able to pull from the sluice pan was this lovely vintage Tissot “Calatrava” from the late 1950s. I call it the “Calatrava” as the watch has no real name. No additional dial text or engraving on the case back reveals any kind of denomination for this particular model. The subtly textured matte silver dial holds only three pieces of information. Arranged in three lines of text, we have: “Tissot”, “Automatic”, and “Swiss Made”. Why say something with ten words that can be said with just four? This is a watch of few words, and that just makes me like it that much more. 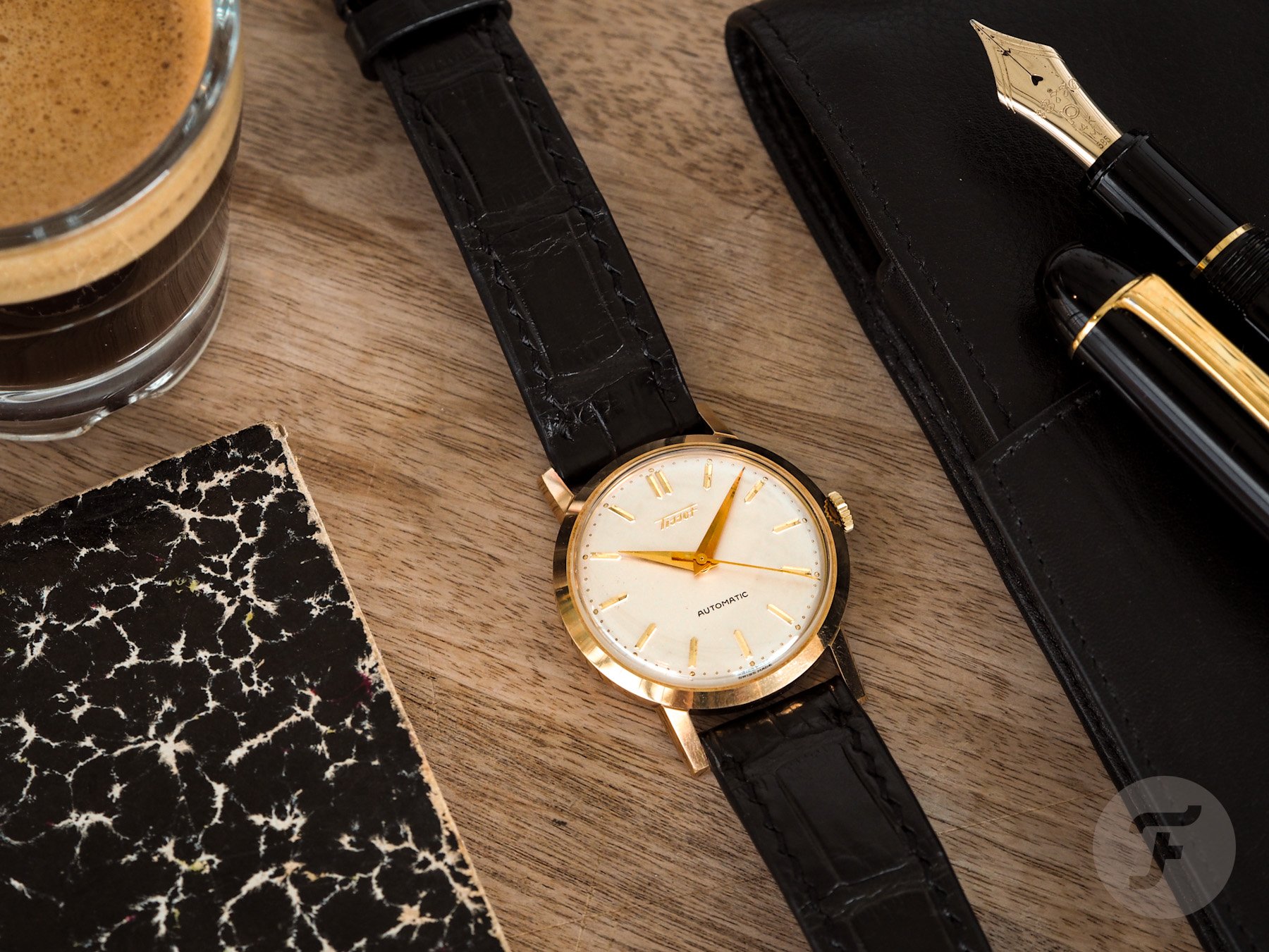 Understated is perhaps not a word you would think to use when speaking about a solid gold watch. However, the 34mm size and classic styling of this piece give it a perfect under-the-radar look. However, when you look closer, there are plenty of details that make this watch an extremely special piece.

But let’s start at the beginning. The watch arrived, alive and ticking but without a strap. I quickly dug out a nicely tapering vintage lizard strap I had in my box, which remained on the watch for a few months. I knew exactly what I wanted for this piece, but that would have to wait. The domed plexiglass crystal was pristine. To this day, I have never received a vintage watch in better condition. 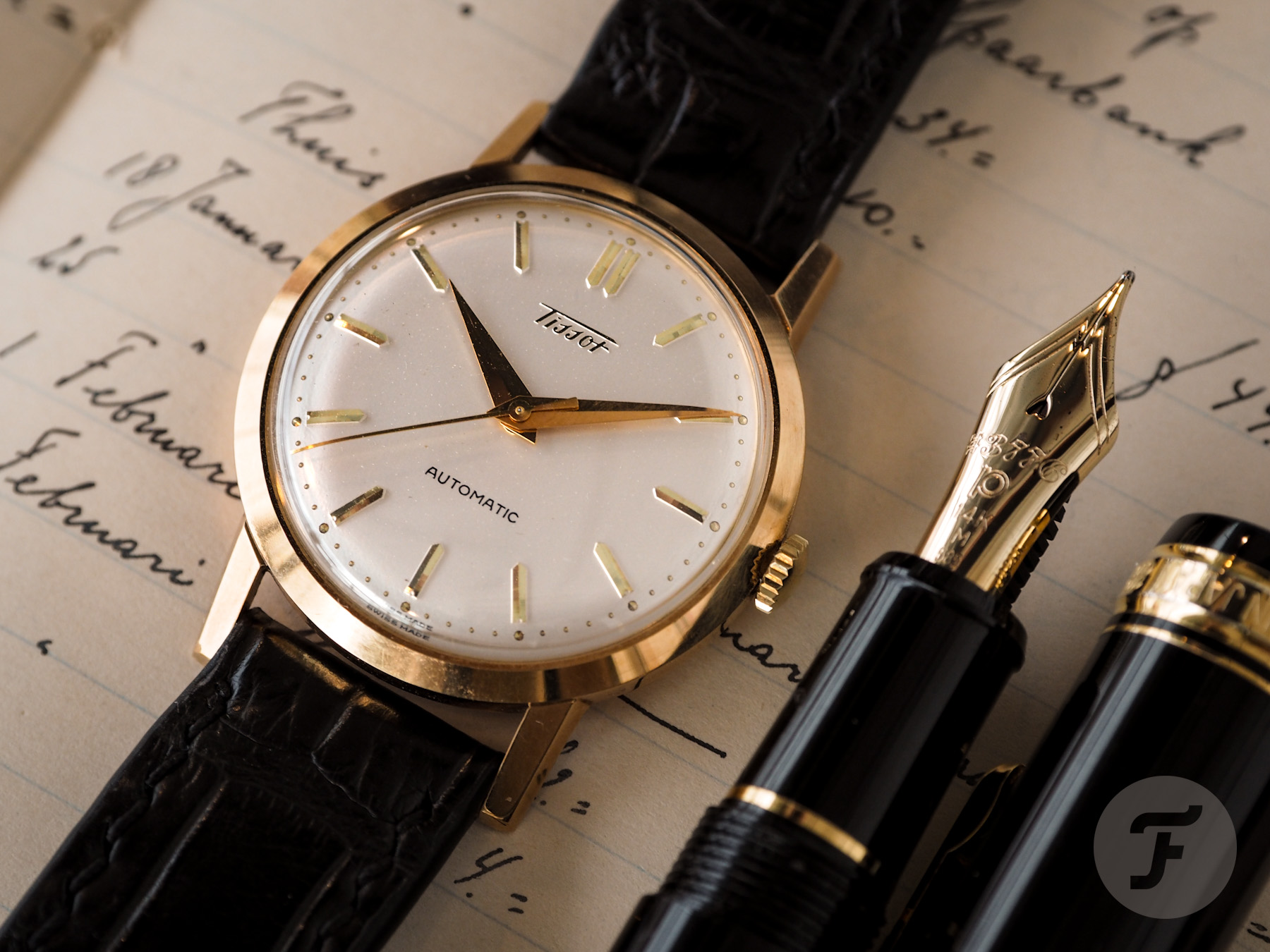 This excellent condition is not limited to the crystal and extends to the whole watch. The biggest signs of wear being a small chip on one of the lugs, and some very light scratches to the back of the case and lugs. We’re talking micro-scratches here, nothing major. The dial, hands markers, and applied logo look like they did the day they left the factory. Perhaps a look through a loupe might reveal a small amount of oxidation taking away from the luster of the applied elements and hands, but this kind of minor detail can be overlooked on a watch from the late ‘50s. Clean and sharp are the keywords here. Just take a look at the pictures and judge for yourselves. 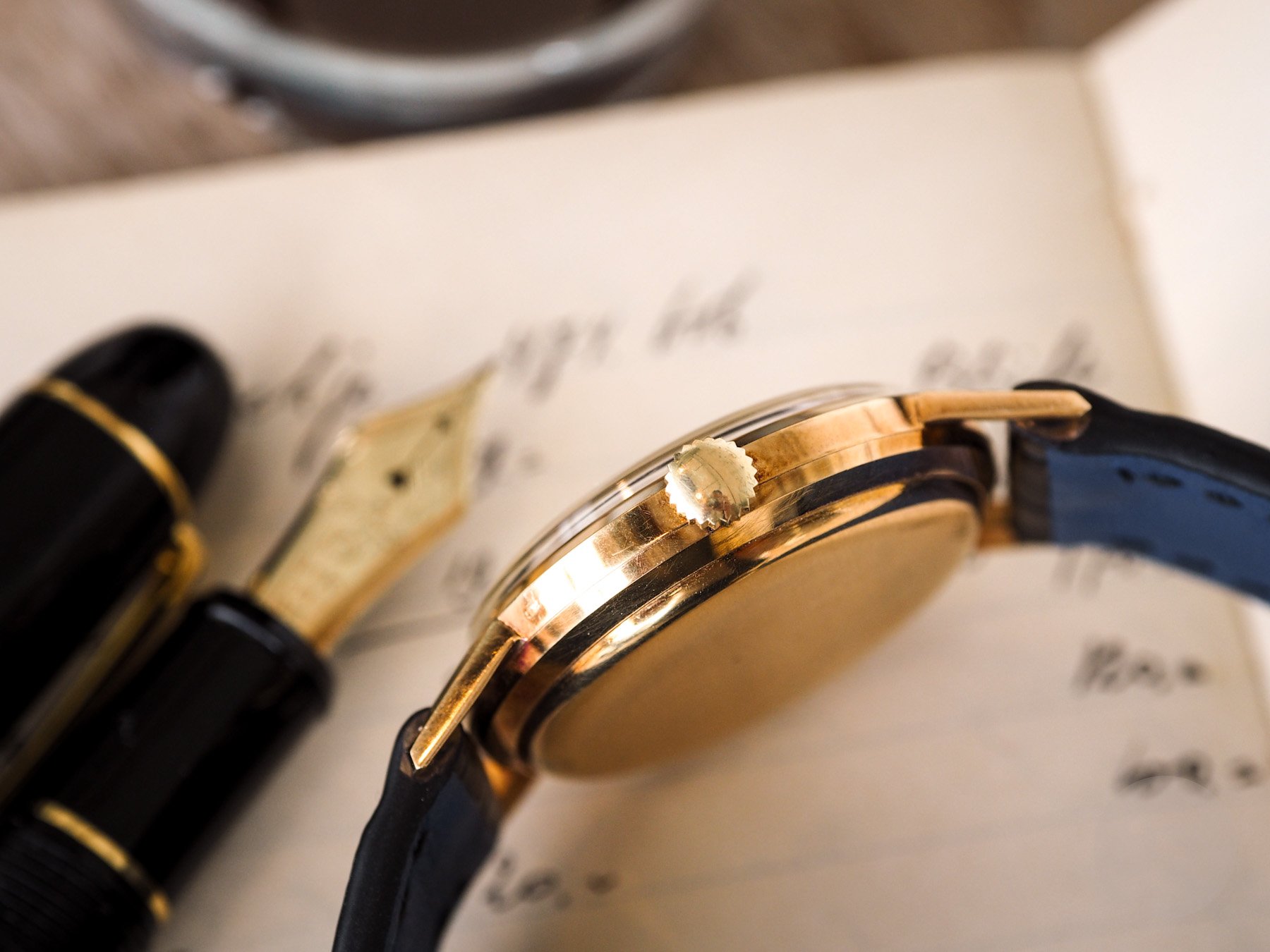 Unfortunately, Werner confirmed that the original box and papers were long lost. All things considered, this was to be expected, and I was happy to be able to call the watch my own. The sharpness of the case and its weight impressed me. Turning the strapless watch head in my hand I could hear the rotor winding the mainspring with a decisive and healthy whirring sound. Hand-winding the movement with the wonderfully grippy crown is a smooth experience, and both the feeling and sound this produces reveals the unused state of what’s inside. Speaking of the crown, this is the only question mark that lingers over this piece. I know Tissot often signed its watches’ crowns, so there is a chance that this one is not original. But not being familiar with the brand’s watches of that era, it’s hard to say for sure. 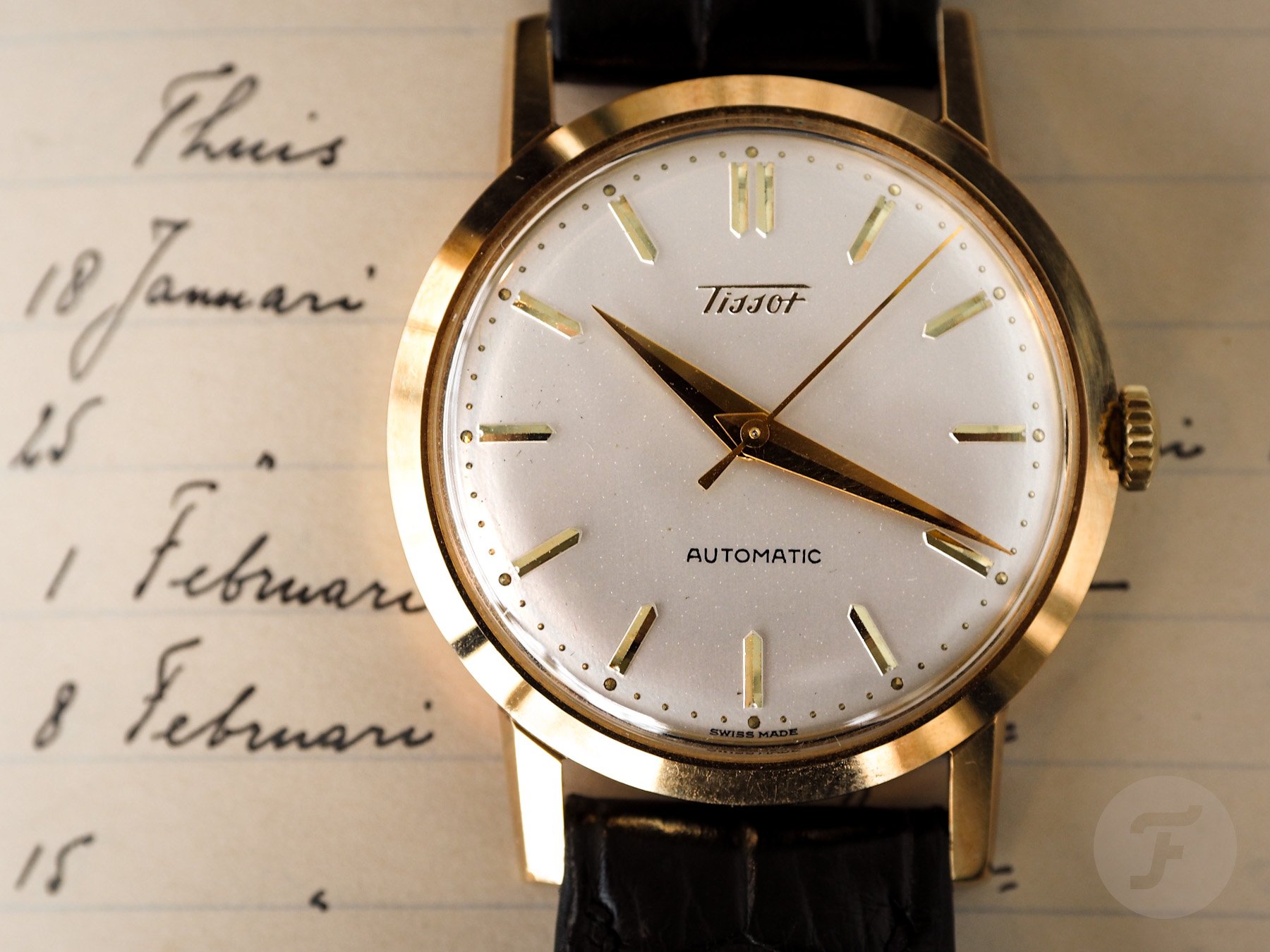 A bit of guesswork

Something else worth mentioning, and which might be apparent from the pictures of this watch, is the fact that I haven’t dared to open the case back. You might have guessed that I haven’t had it serviced either. This is one of the many watches from my collection that likely requires some quality time with a watchmaker. However, in this case, I am happy to report that I followed Werner’s example with this particular piece. My priority was to avoid dried oils and other residues to potentially damage what I assume is a pristine movement inside, I’ve kept this one in the box. In total, this watch has probably only spent about two to three days on my wrist. Only when the temptation was too great. 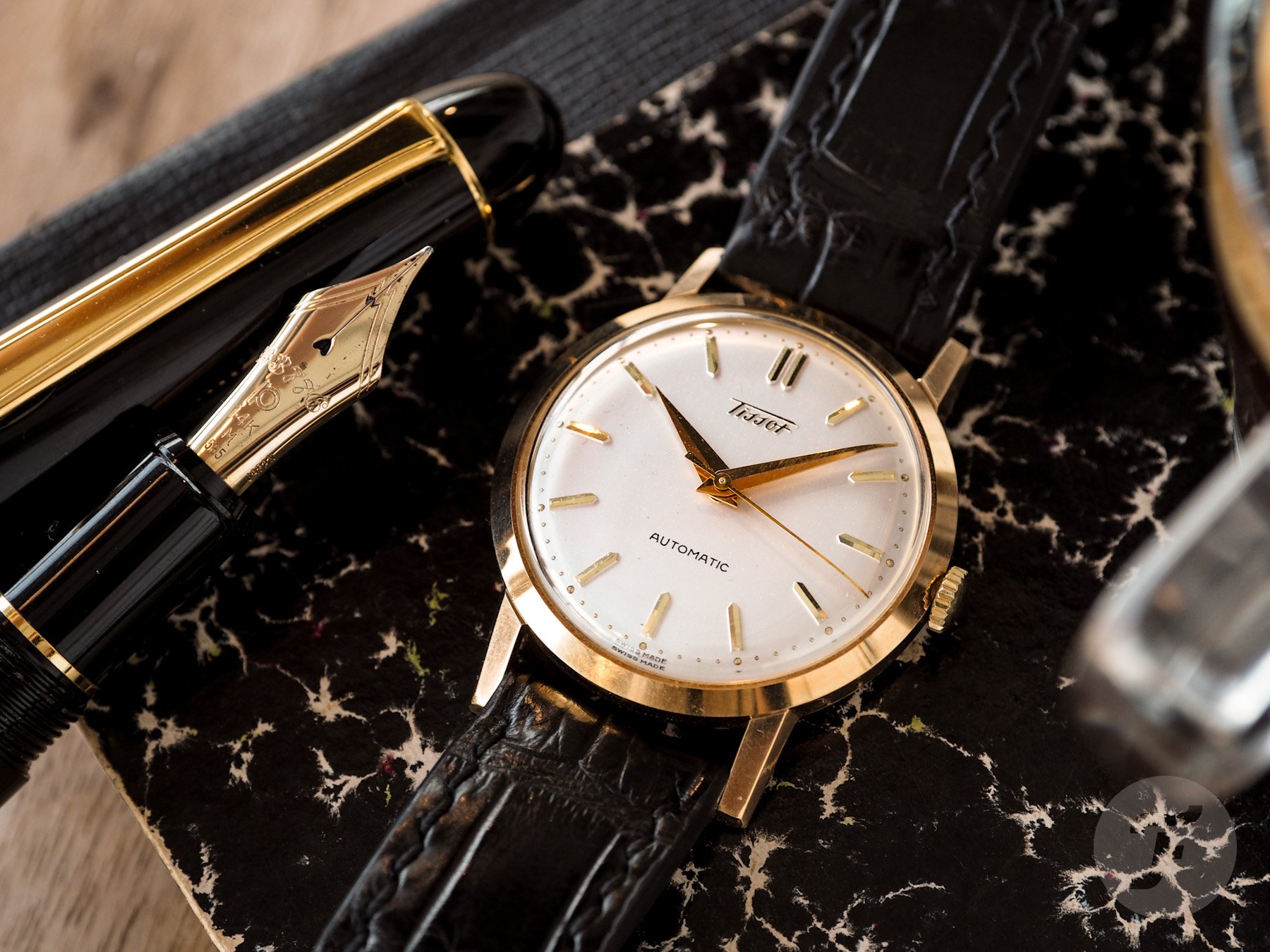 I suppose that in writing this article about it I am making myself accountable. I’ll have no choice but to have it serviced and take some pictures of what I hope will be a beautiful movement inside. For now, I can only guess as to what’s inside. The temptation isn’t greater than my fear of damaging or scratching the case, so I’ll leave it to a trained professional watchmaker. There is one thing that I know to be true, and it’s that once this one is back to a state in which it can be worn without fear for the movement, it will spend plenty of time on my wrist. 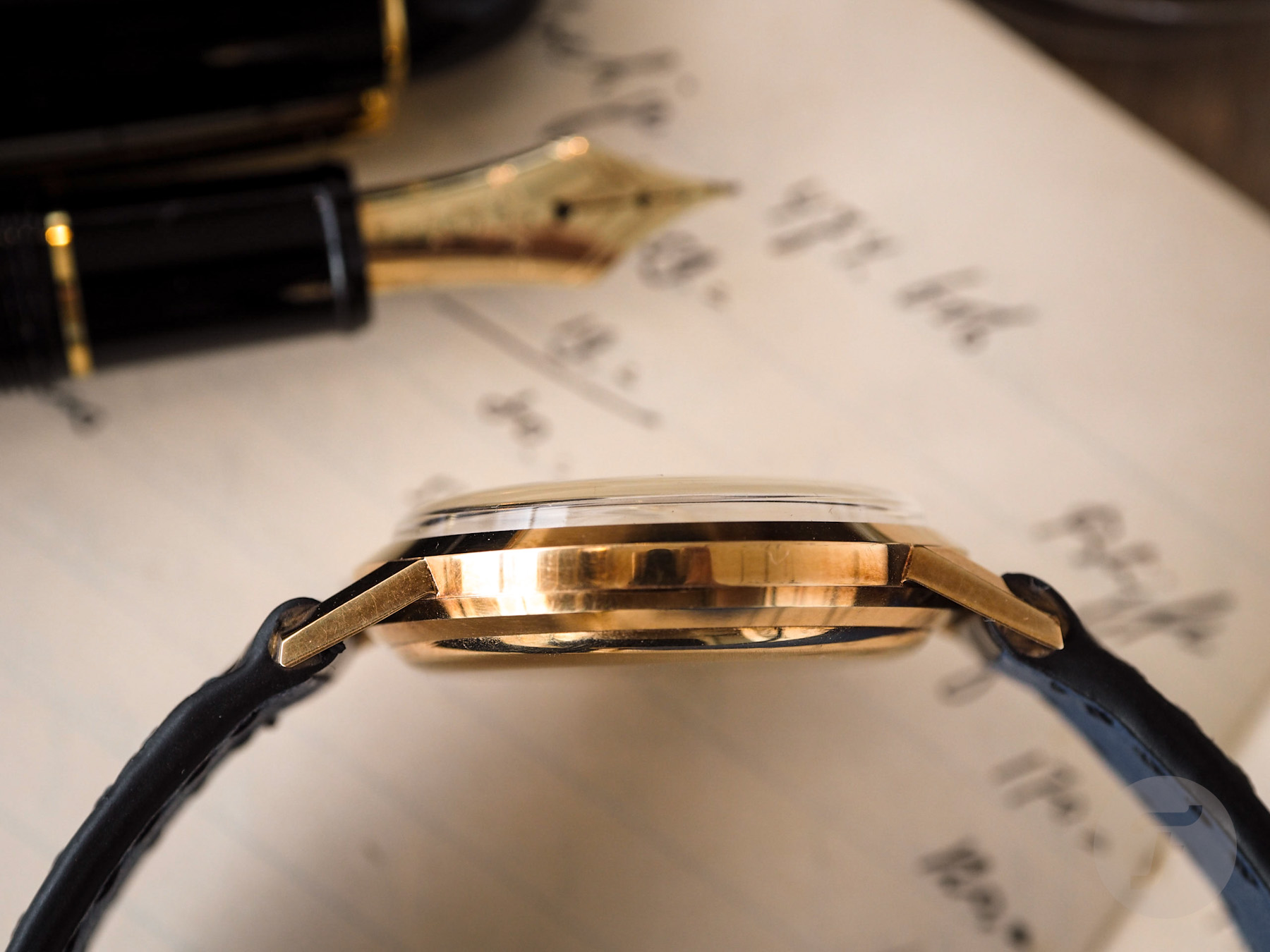 Previously I mentioned that the strap choice was clear to me from the start. As you can see in the pictures throughout the article, it was a simple but classic choice. A thin black alligator strap, with a blue calf backing. It’s a perfect match for this classy understated piece. The blue backing adding a detail that I get to enjoy every time it comes off the wrist. It will definitely be sooner rather than later that I hope to get to break in the strap with the stunning vintage Tissot “Calatrava” on it. It’s a watch that has spent far too long boxed up and is long overdue some well-deserved time on the wrist.

In the meantime, I’d love to hear your thoughts on this Vintage Tissot. Would the 34mm size put you off? Or do you think an exception can be made for old and gold? Make sure to leave your thoughts in the comments down below.

Hot Topics
Introducing: The Omega Speedmaster Super Racing With Spirate System
165 comments
New Release: The Limited-Edition Seiko Prospex SLA067J1 Diver
65 comments
My Predictions For New Omega Speedmasters In 2023
60 comments
The Best Independent/Microbrand Alternatives To The Rolex Explorer In 2023
53 comments
The Time To Buy Is Now: How The Current Economic Climate Influences Watch Buying And How You Should React
51 comments
Popular
Two Patek Philippe Nautilus Watches: 3700/1A Versus 5711/1A
Robert-Jan Broer
16
Why Are There No Stainless Steel Rolex Watches Available?
Robert-Jan Broer
121
You Asked Us: Nomos Orion as a dress watch?
Gerard Nijenbrinks
10