It’s Speedy Tuesday! Two years ago, we showed you the Omega Speedmaster Pro that once belonged to ESA (European Space Agency) astronaut Reinhard Furrer (you can find the original article here). That is, he probably received it during ESA & NASA training in Germany and ‘forgot’ to give it back to NASA. After Reinhard Furrer died in a fatal plane crash, it fell into the hands of a friend of Fratello Watches who showed it to us, not exactly knowing what he had in his hands.

Now, the current owner is willing to part with it, using the Bonhams auction that will be held on the 10th of December 2014. According to their press release, the watch will probably fetch between 20.000 and 30.000 GBP.

We want to give you a small recap on this watch and why it’s significant for Omega Speedmaster collectors. 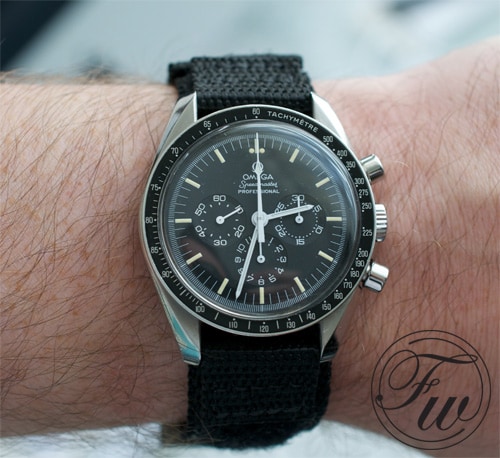 In 1978, Omega was asked for a few watches for re-certification by NASA. This re-certification was necessary for the Space Shuttle program that was yet to come (1981 – 2011). For EVA (Extravehicular Activity) purposes, Omega already delivered the astronaut’s Speedmaster Professional models since 1966 and now it was time to do some extra tests on the watch for the Space Shuttle missions. All work done by Omega for NASA is being categorized as an ‘Alaska’-project, of which the white dial version is perhaps the most famous.

A small quote from our previous article:

The astronaut’s Speedmaster that we show you here and that will be auctioned on the 10th of December at Bonhams, is a reference 145.022 model from that first batch of 56 pieces. It was part of the Alaska III project by Omega, for NASA. 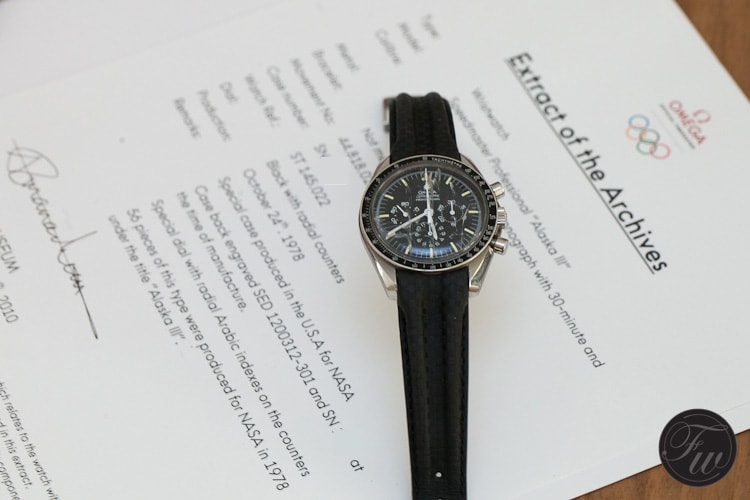 Astronaut’s Speedmaster – Flown or Not?

However, this doesn’t mean it hasn’t been worn by any of the other astronauts during Space Shuttle missions. There might have been astronaut’s in the period before Furrer’s training by NASA (which probably took place at the ESA stationary in Germany). However, this information is not known or publicized yet but we know that Omega is putting a lot of effort in doing research on this topic.

What’s The Difference With A Regular Speedmaster?

As you’ve probably noticed, there are some small differences in this astronaut’s Speedmaster and a regular Speedy Pro 145.022, besides the fact it was owned by NASA/Reinhard Furrer of course. Where the Speedmaster watches used by NASA during the Apollo program were unmodified for the missions (there used to be an advertisement by Omega telling customers that only the length of the strap was different), this caliber 861 Speedmaster 145.022 has some differences to the normal production Speedmasters.

If you take a look at the dial, you will notice that it has the so-called radial dial. This dial lay-out was also used at the first (white dial) Omega Speedmaster Alaska Project and has been on some prototypes from the early 1970s as well – as there’s one in the museum as well. See below. 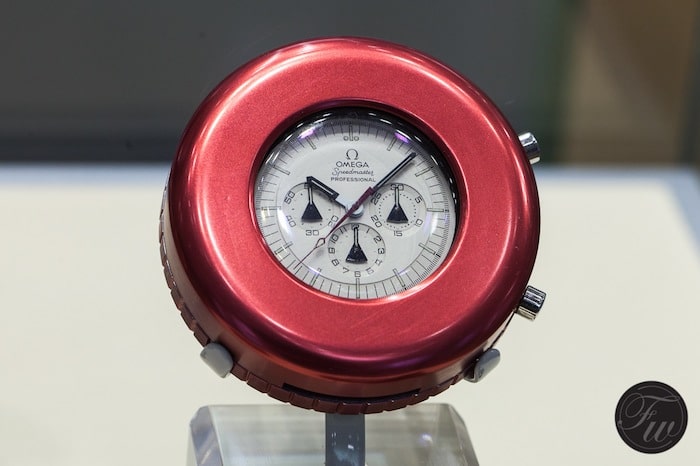 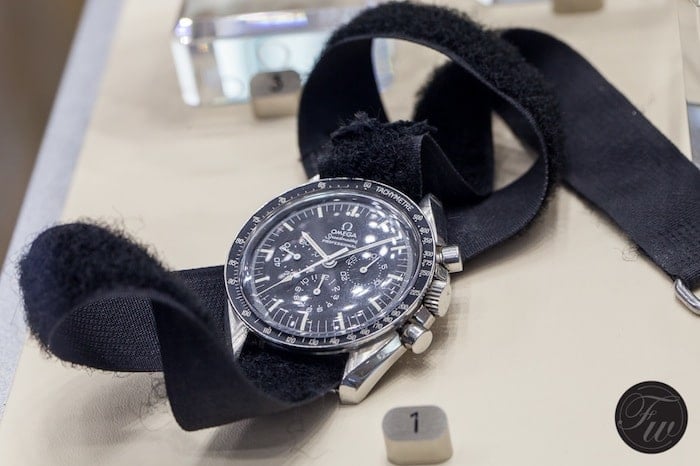 These pictures were taken during our trip to the Omega museum last year, of which you can find our photo report here.

Of course, we took the liberty to hold the astronaut’s Speedmaster Professional next to our own 1970s Speedmaster Pro to show the difference in appearance. At the time we received this watch for inspection, the crystal was heavily damaged and the watch was worn on an Omega Speedmaster Pro X-33 strap. In fact, the stainless steel bracelet the watch is being offered on right now was put on it by us as the current owner liked this a bit better on the Speedmaster. 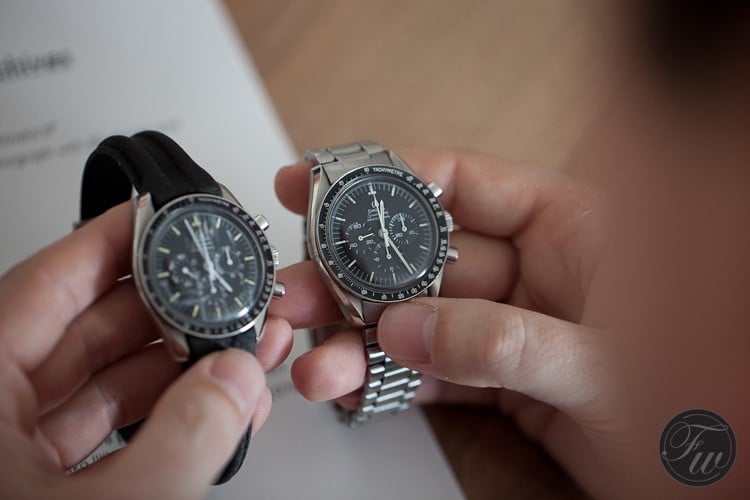 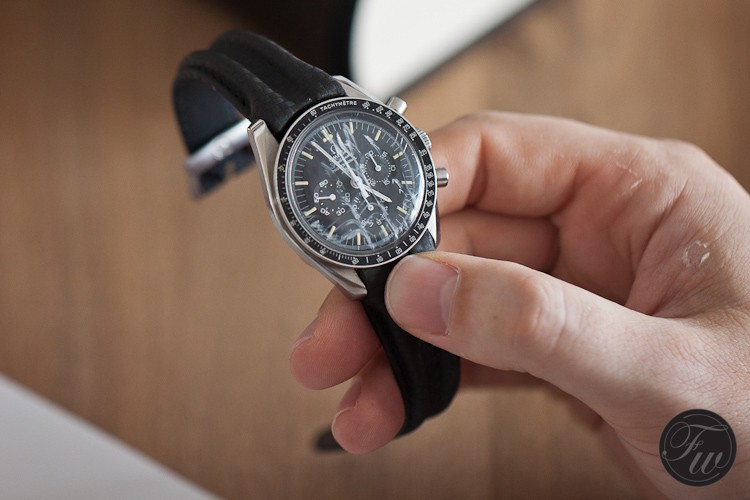 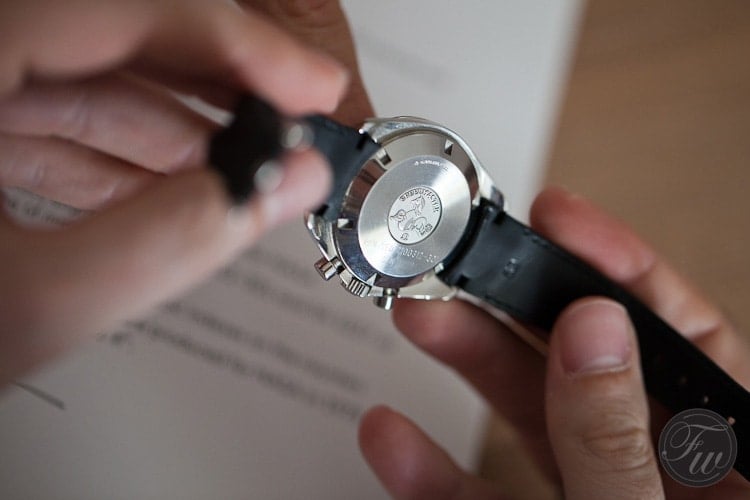 The case back of the watch has of course the internal serial number and product number (called the NASA SED Production Number) engraved. This was for administrative purposes, so the team of NASA’s James H. Ragan could file them accordingly and (try to) keep track of them.

We Photoshopped the serial number on the photo below at the time, for security reasons but Bonhams left it on in their press photos. 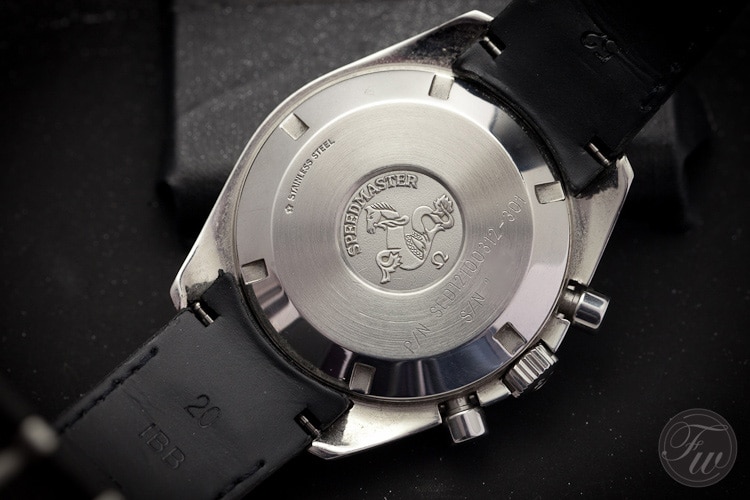 Although 20.000 – 30.000 GBP is an amazing sum for a stainless steel Omega Speedmaster Professional, the fact that it was just one of the 56 pieces sent from Omega to NASA and being actually worn by an astronaut makes it very special. 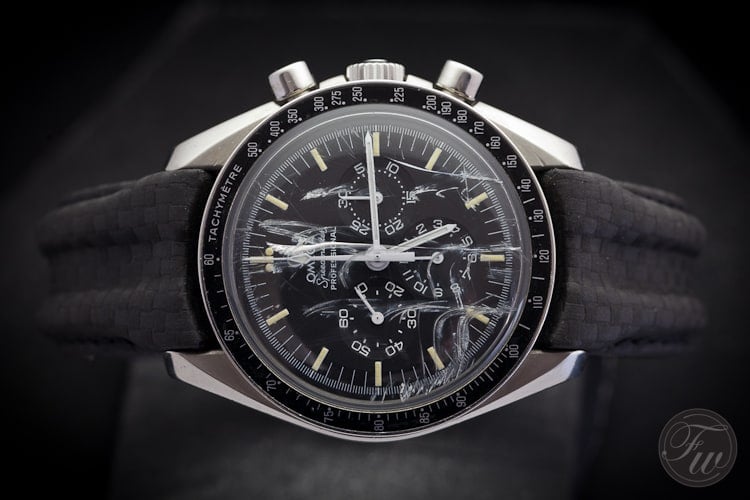 If the watch had flown, on the wrist of Reinhard Furrer, and this could be proved with some actual photos, the watch could be worth much more. However, he didn’t (footage on film and photo clearly show him wearing the Sinn 140) and that makes it that we can see why the estimate has been defined between 20.000 and 30.000 GBP.

We will keep a close look at the auction of December 10th and keep you posted on the results. In the meanwhile, you can request the brochure (that alone might become worth something if the watch sells for a high price).