Breaking Down The Watch Brand: Tradition Weighs Heavy On Breguet, But It Can Also Be A Blessing

Believe me when I say that I don’t want to write anything presumptuous, but contemplating watch brands and subsequently writing down thoughts and ideas is something I thoroughly enjoy. And so that’s exactly what I’m going to do in this first installment of Breaking Down The Watch Brand. First up is Breguet, the most famous name in watchmaking, but not the most famous brand in watchmaking. Why could that be the case? Let me give it a go and try to answer that question.

I will not go into the life of Abraham-Louis Breguet (1747 Neuchâtel, Switzerland – 1823 Paris, France) because that has been done more than enough, if not here, then most certainly somewhere else. But I have to say this: apart from his genius watch inventions, marketing strategies, and relation management, the man was a dauntless survivor. But I will come back to Breguet’s inspirational walk through life briefly at the very end of my epistle. The history of Breguet as a manufacturer is a long one that breaks down into a couple of essential periods. It all starts, of course, with the founder. After his death, his only son, the gifted watchmaker Antoine-Louis Breguet (1776–1858) took over. Back in those days, owning a Breguet clock or pocket watch was a sign of prosperity, success, and wealth. A Breguet creation was an undisputed status symbol. 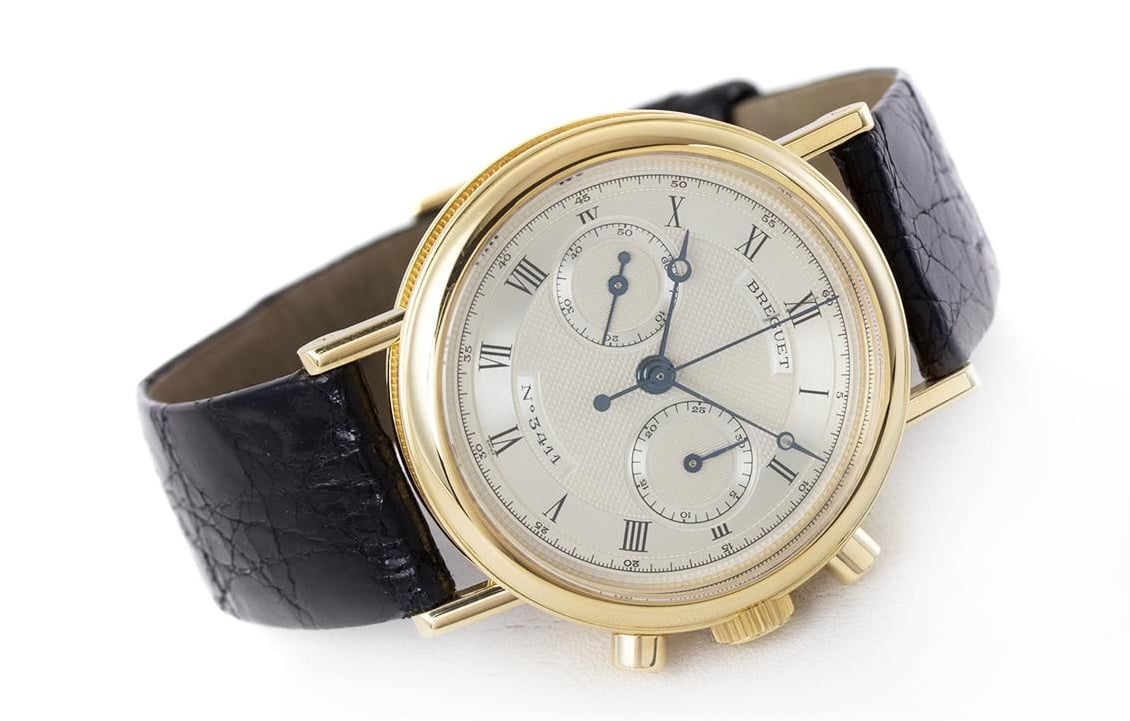 Breaking Down The Watch Brand — Breguet, but also Brown, Chaumet, and Investcorp

All descendants of Abraham-Louis Breguet were quite talented. They were more than “just” watchmakers; they were scientists. Grandson Louis-Clément-François Breguet (1804–1883) was a talented watchmaker who worked at Perrelet. However, he also had a deep interest in physics. And that interest was shared by his son Antoine (1851–1882), which led to the decision to focus on the groundbreaking business of manufacturing electrical equipment for use in the fields of physiology, telegraphy, and railroad signaling — it was the beginning of the Second Industrial Revolution. That meant that Louis-Clément sold the watchmaking part of Breguet. On May 8th, 1870, Breguet’s factory manager and partner in the company, Englishman Edward Brown, bought it and became the owner of Breguet. The Brown family owned the company for just over a century. In 1973, the brothers Jacques and Pierre Chaumet, stemming from a family of Parisian jewelers, bought Breguet. 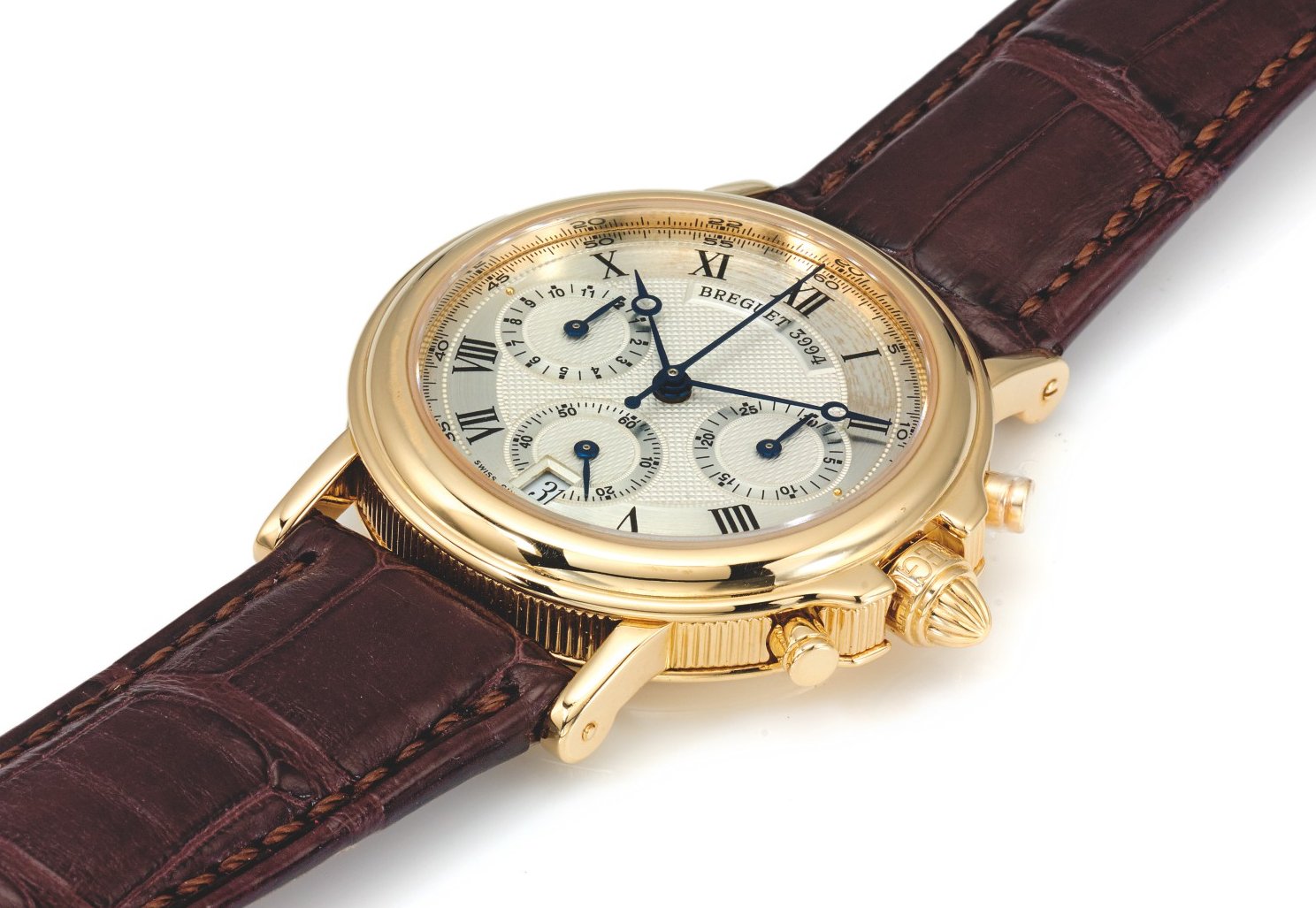 Daniel Roth steps into the footsteps of Abraham-Louis Breguet

Being an expert in the field of jewelry is no guarantee for success in the world of high horology. The brothers had big plans, moved the watchmaking workshop to Le Brassus in the Swiss Vallée de Joux, and even hired brilliant young watchmaker Daniel Roth to capture the essence of the brand’s founder. Have a look at the two chronographs I included in the story and you be the judge if Roth managed to do so. Roth picked out emblematic Breguet elements such as guilloché dials and the blued, simply shaped hands we now know as Breguet hands. Roth also introduced A.L. Breguet’s most famous technical invention to the range of wristwatches — the gravity-defeating tourbillon.

But it all ended in tears in 1987 when Jacques and Pierre Chaumet got arrested and subsequently charged with fraud. The bankrupt brothers had no choice but to sell Breguet that same year to Investcorp, a company from Bahrain with offices worldwide.

Investcorp in, Roth out

Daniel Roth saw no future for him under the Investcorp reign and left Breguet to start his own brand. Although Investcorp acquired both movement maker Nouvelle Lemania and Valdar, a supplier of micro-mechanics in 1991, the watch brand Breguet struggled. The quality dropped, and so did the relevance. With watch lovers becoming more and more educated in a watch world that was now based on artisanal qualities, luxury, and emotion, the watches Breguet had to offer just couldn’t match the offerings of competing brands like Patek Philippe and Audemars Piguet. Luckily for the brand and the legacy of Breguet, Swatch Group founder Nicolas G. Hayek (1928–2010) saw the potential of the most famous name in watchmaking, and in 1999, he acquired the brand. Breguet joined the group of the fifteen brands and immediately became the pearl in its crown.

Nicolas G. Hayek was deeply involved in bringing back Breguet to its former glory. And since the path to greatness consists of having a strong and genuine desire, the late Mr. Hayek had a great chance of succeeding. But it seems that nothing takes more time than rebuilding the image of a once-great watch brand. Hayek did so much for Breguet. He recreated the famous Marie-Antoinette pocket watch, for instance. And he also decided that Nouvelle Lemania was to transform into the brand’s exclusive, in-house movement producer. He bought ancient Breguet pieces for the Breguet Museum and, at the same time, made sure the creations from the Chaumet and Investcorp era disappeared from the market. Hayek was effectively erasing and preserving history to ensure the future of Breguet. But he just didn’t have enough time. Breguet’s current president, Marc A. Hayek, grandson of Nicolas, has some big shoes to fill. 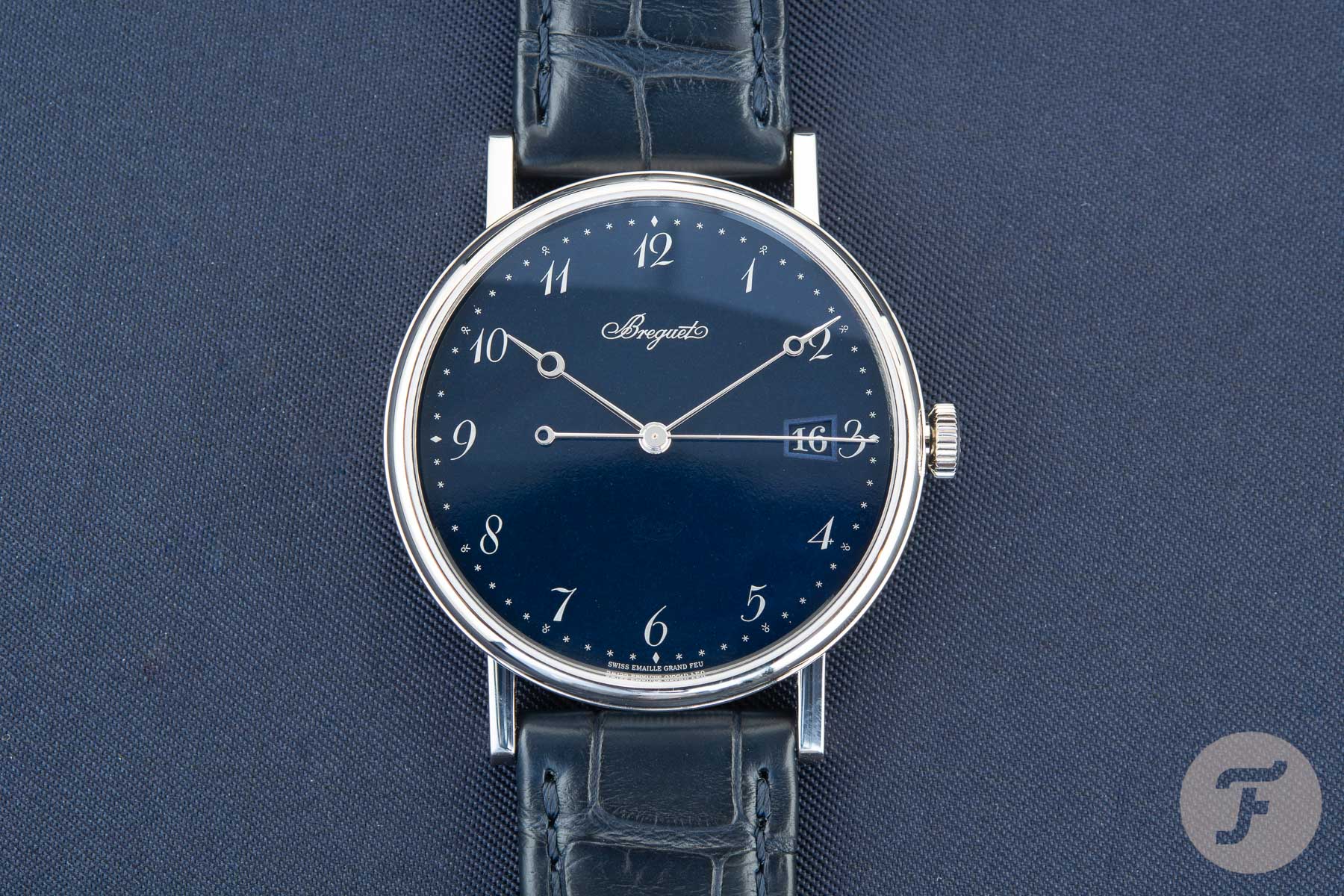 Inventions and the launch of the pre-crowdfunding watch

The greatness of Abraham-Louis Breguet is expressed in many horological inventions. The list is long and on it are, among other things, the self-winding “Perpétuelle” movement, guilloché dials, the overcoil balance spring, and the tourbillon. Unfortunately for the Breguet brand selling watches in 2022, these marvelous inventions are also used by the competition. No matter how long the list of iconic inventions (more than 200 patents since the foundation of the House of Breguet in 1775), it doesn’t count in the way that a unique watch does — not like the Royal Oak, Nautilus, or Day-Date. And that brings me to one of the most, if not the most significant Breguet introductions in modern times — the launch of the Tradition collection in 2005. 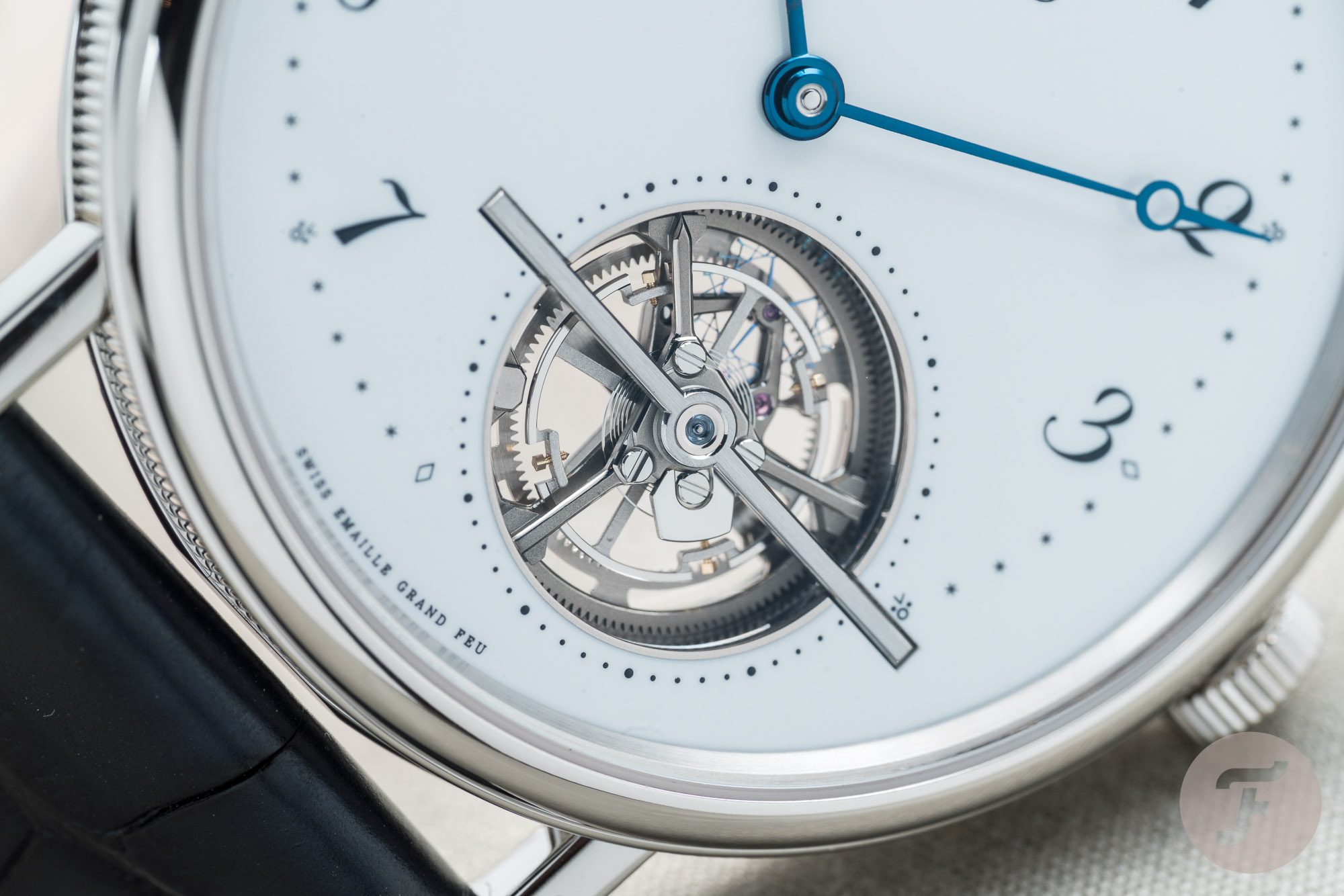 Before I elaborate on that, though, I must backtrack a bit — say, 211 years. A.L. Breguet came up with the unique idea Souscription watch in turbulent times —1794 in Paris, during the French Revolution. Breguet had returned from exile in Switzerland and was rebuilding his business on Quai de l’Horloge on the Île de la Cité in Paris. And the revolutionary pre-crowdfunding he came up with helped him to remain financially stable. A client would make a down payment of 25 francs for a limited series watch and pay the remaining sum upon delivery. Breguet designed a robust and simple movement to make his creations accessible in a completely changed market. 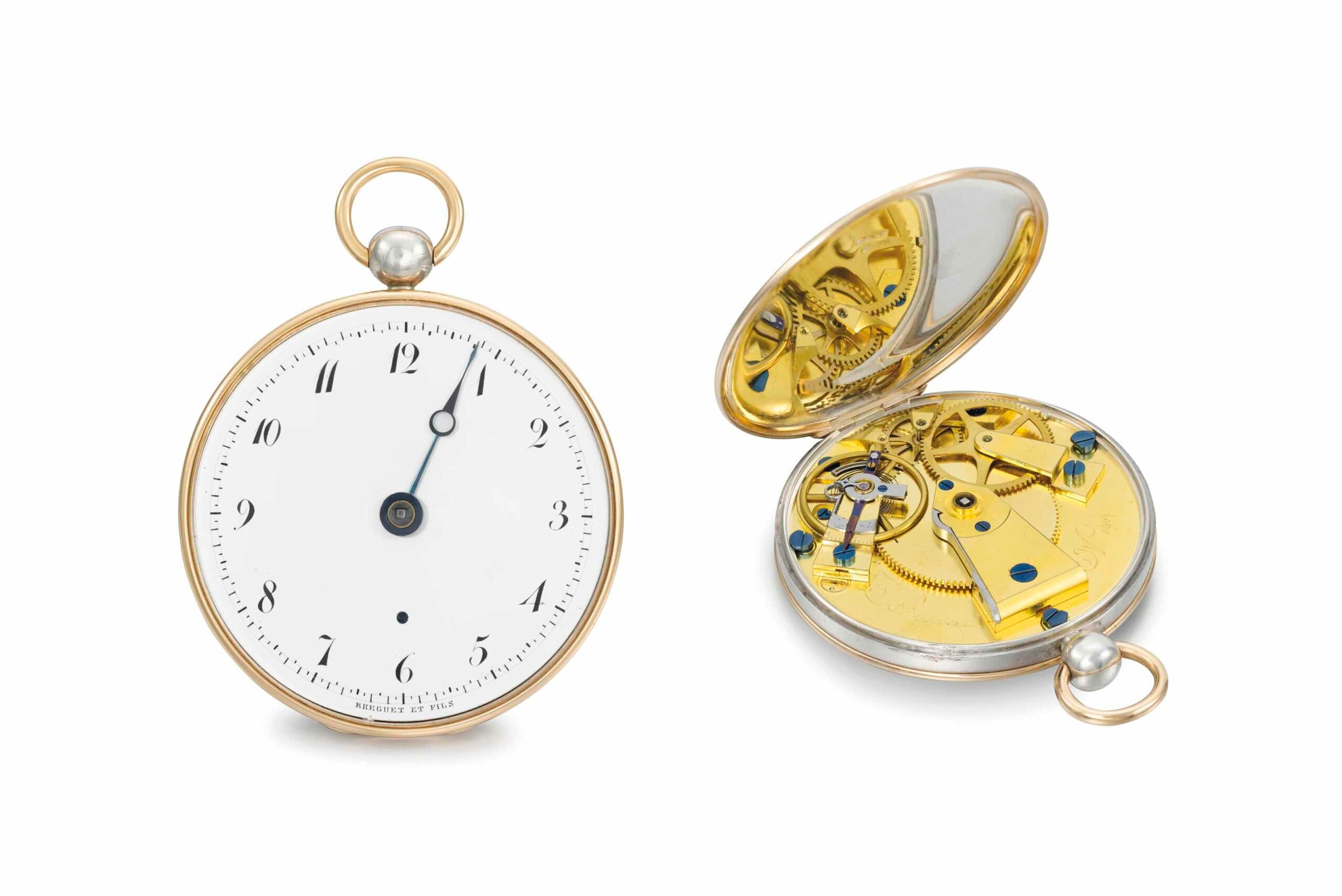 Tradition is the way forward

The industrial, edgy, solid-looking movements of Souscription pocket watches like the 3907 with its central going barrel, plain three-arm brass balance, and single blued-steel Breguet hand, was brought back to life in the 2005 Tradition 7027 we featured in a “Wrist Game Or Crying Shame” story — 79% of voters thought the watch was wrist game, by the way. More than twenty years later, the Breguet Tradition has no equal. There might be some futile open-worked attempts done by competitors, but none can stand in the shadow of the Breguet Tradition. The great thing is that all of Breguet’s inventions can be used in a series of unique-looking watches. There are tourbillons, several retrograde models, and even a chronograph. 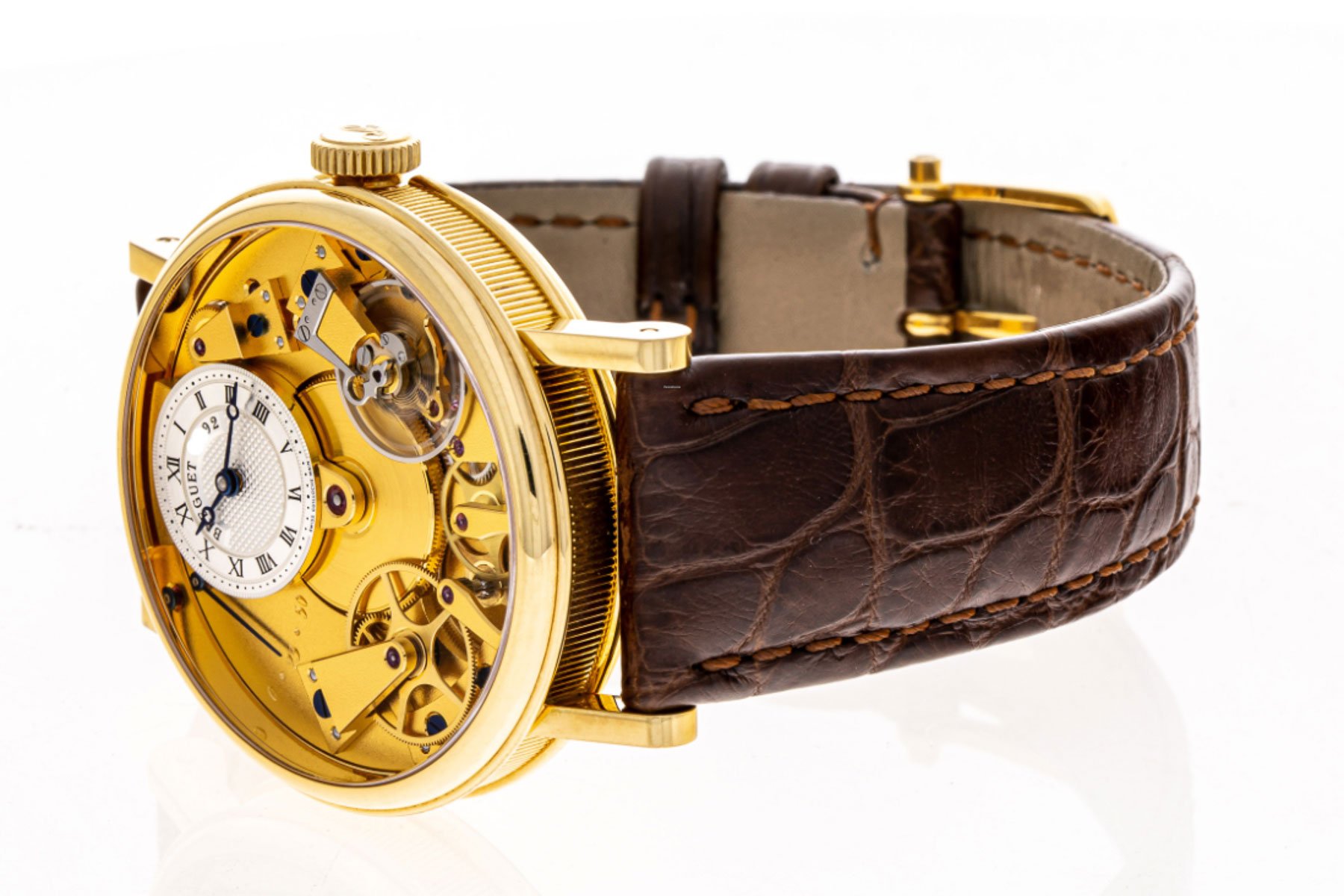 But what is missing, in my humble opinion, is a relatively simple and affordable (read: steel) Tradition in the spirit of accessibility of the original Souscription. It would reach a larger audience and while doing so, potentially become a widely recognized watch icon. A 38mm size like the original Tradition 7027 would be perfect in light of the current trends. 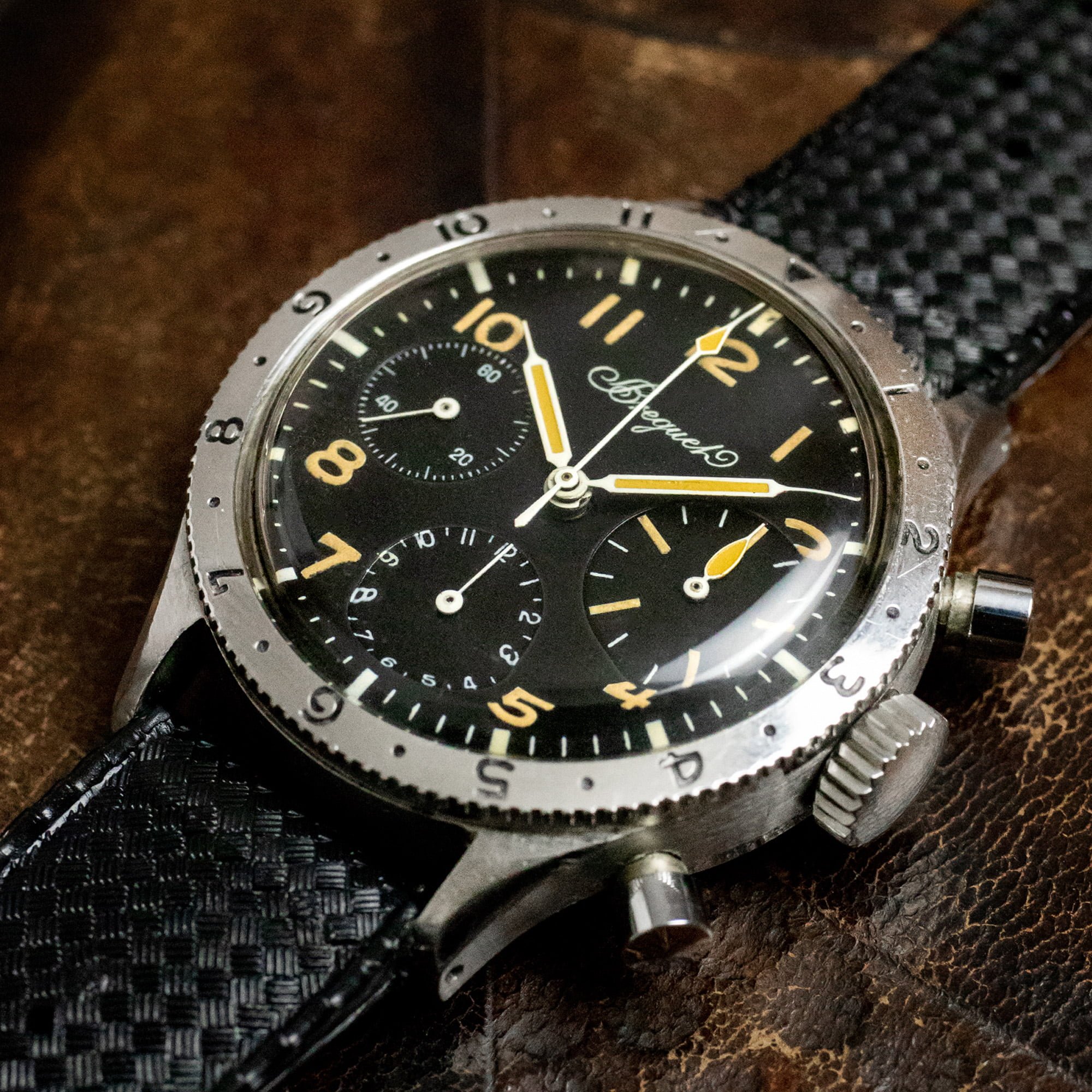 Why the Type XX is not The One

What chronograph nut doesn’t like the Type XX? I sure do. What’s not to like? The original from 1958, which was made to the requirements of the French Naval Air Force (Aéronautique Navale), is one hell of a watch. Breguet delivered 500 numbered pieces, all with “BREGUET MARINE NATIONALE AERONAUTIQUE NAVALE” engraved on the case back. The military, however, also commissioned several other watch companies to create a flyback chronograph for its fighter pilots. And that’s the thing, or even “problem” if you will: Breguet wasn’t the only watchmaker to build Type XX chronographs. Mathey-Tissot, Airain, Vixa, Auricoste, and Dodane also made them.

Modern Type XX chronographs are made by Airain and Undone, among others. At the same time, there’s also a plethora of chronographs that have more or less the same look — think the Longines Avigation BigEye and Breitling AVI. These are brands are not in the same ballpark in which Breguet wants to play. 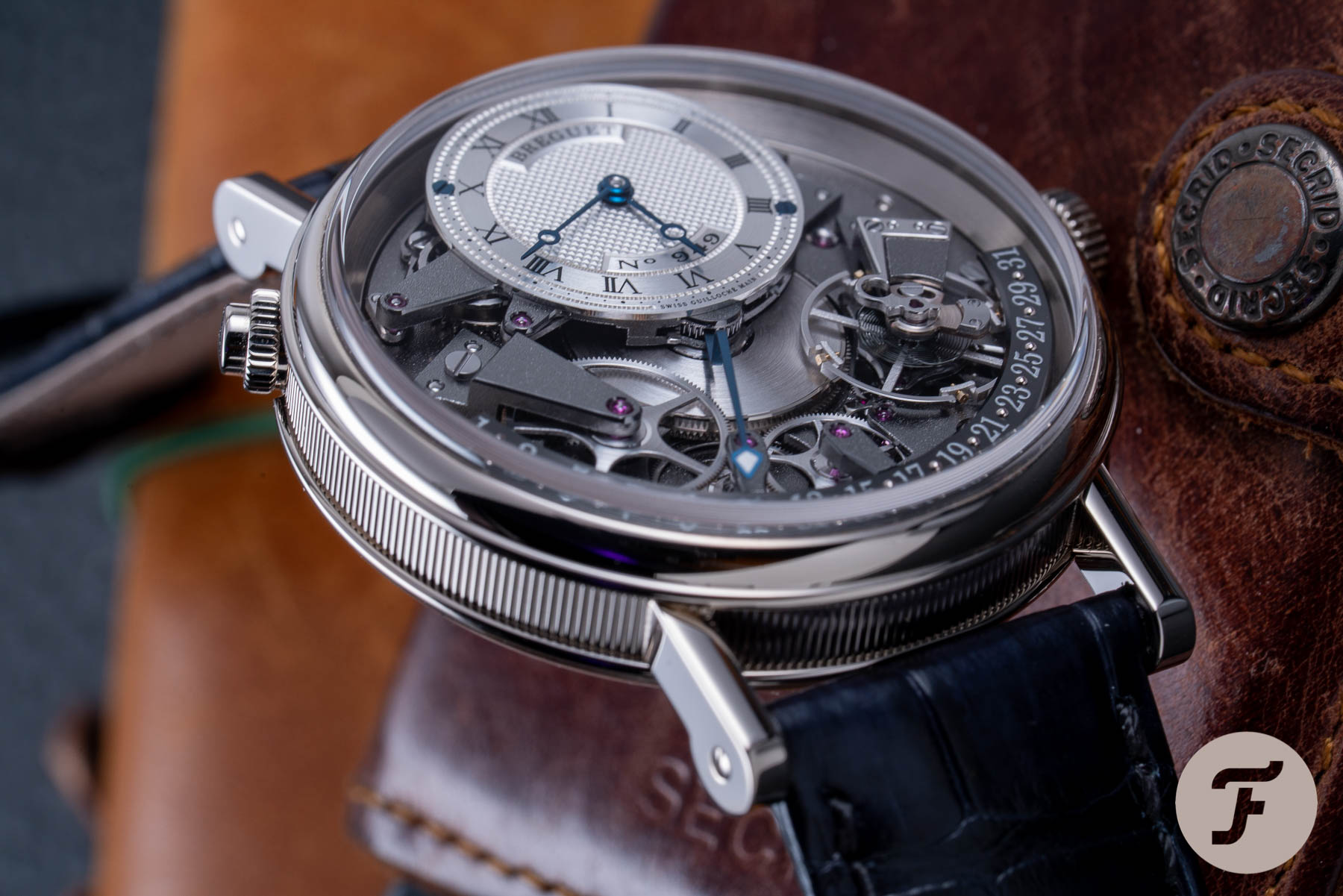 Components of an icon

Here are my final thoughts on the Type XX matter. What if the Royal Oak was also made by Maurice Lacroix, Raymond Weil, and Edox? Do you see my point? No matter how fabulous a Breguet Type XX and its more refined, complicated, modern versions are, they will never be brand icons because of the original’s historical background.

The Tradition, on the other hand, has all the components of a brand icon. But the making of an icon — or perhaps I should say “the growth of an icon” because the process can be nourished but not forced — takes, apart from having a unique product, time. Additionally, patience and unwavering determination are crucial elements. And in this day and age, storytelling is essential. Maybe it’s now the right moment to disclose my idea that possibly could help tell the story of Breguet. I’m thinking of storytelling done in a way a modern audience will understand and be captivated by. Something extremely visual and gripping.

Abraham-Louis Breguet lived in a most fascinating age. He did business with Louis XVI, the king of France, and his wife Marie-Antoinette, of course. And A.L. Breguet was nearly killed during the French Revolution. Thankfully, he was saved by the revolutionary Jean-Paul Marat, whose sister made watch hands for Breguet. And that was after he had saved Marat from a lynch mob by dressing him up as a woman. Later, he fled France and was condemned as a traitor, while the Committee of Public Safety confiscated his factory and shot one of his workers. Breguet’s home and atelier were plundered, and his equipment was destroyed. The Reign of Terror had France in its deadly grip. But as soon as the situation calmed down a bit, Breguet came back. And with great effort, groundbreaking ideas, and people skills, he managed to resurrect his business. 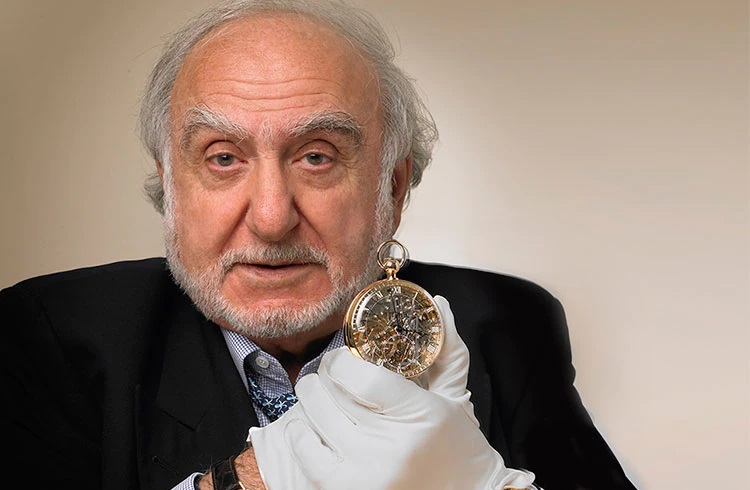 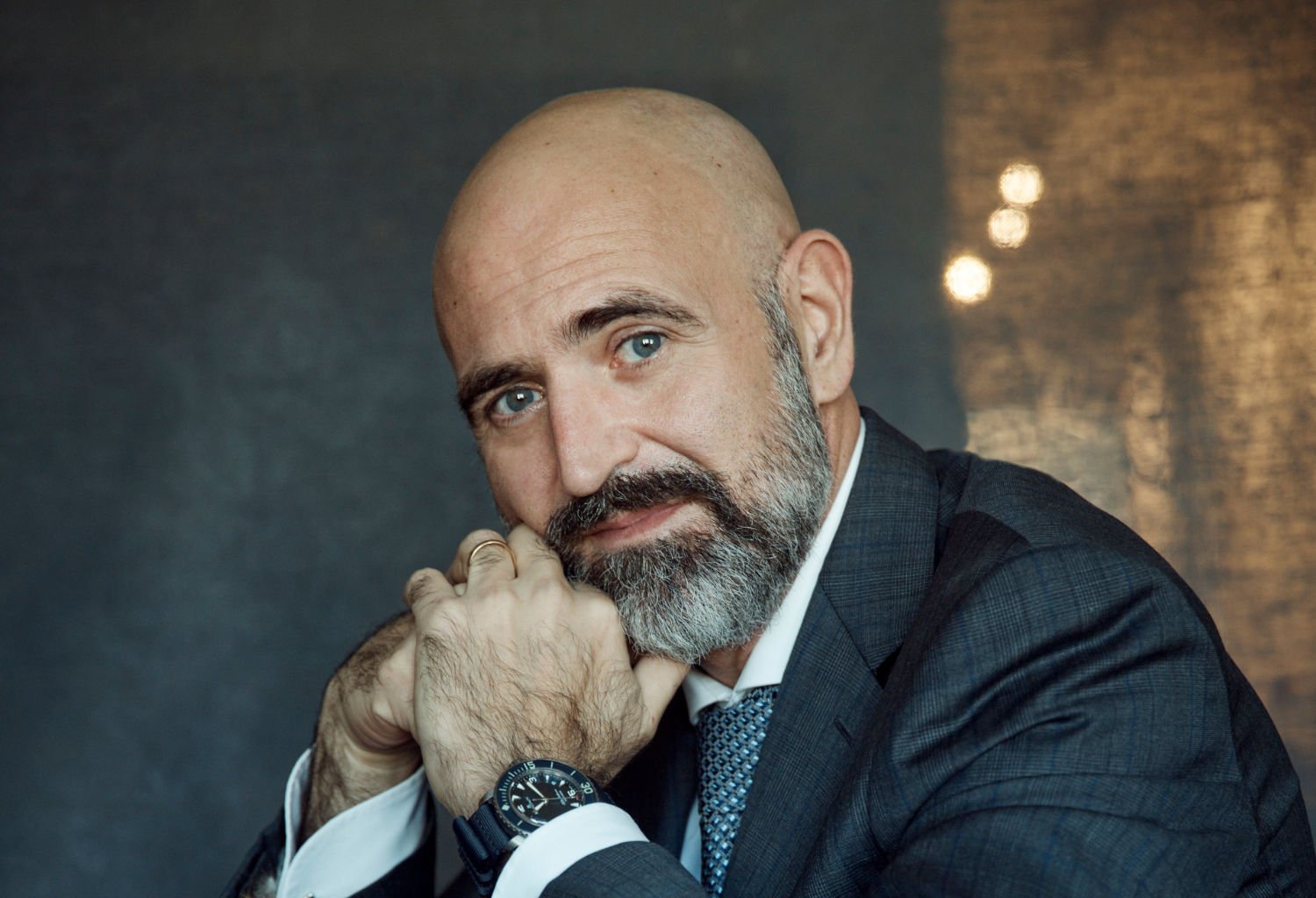 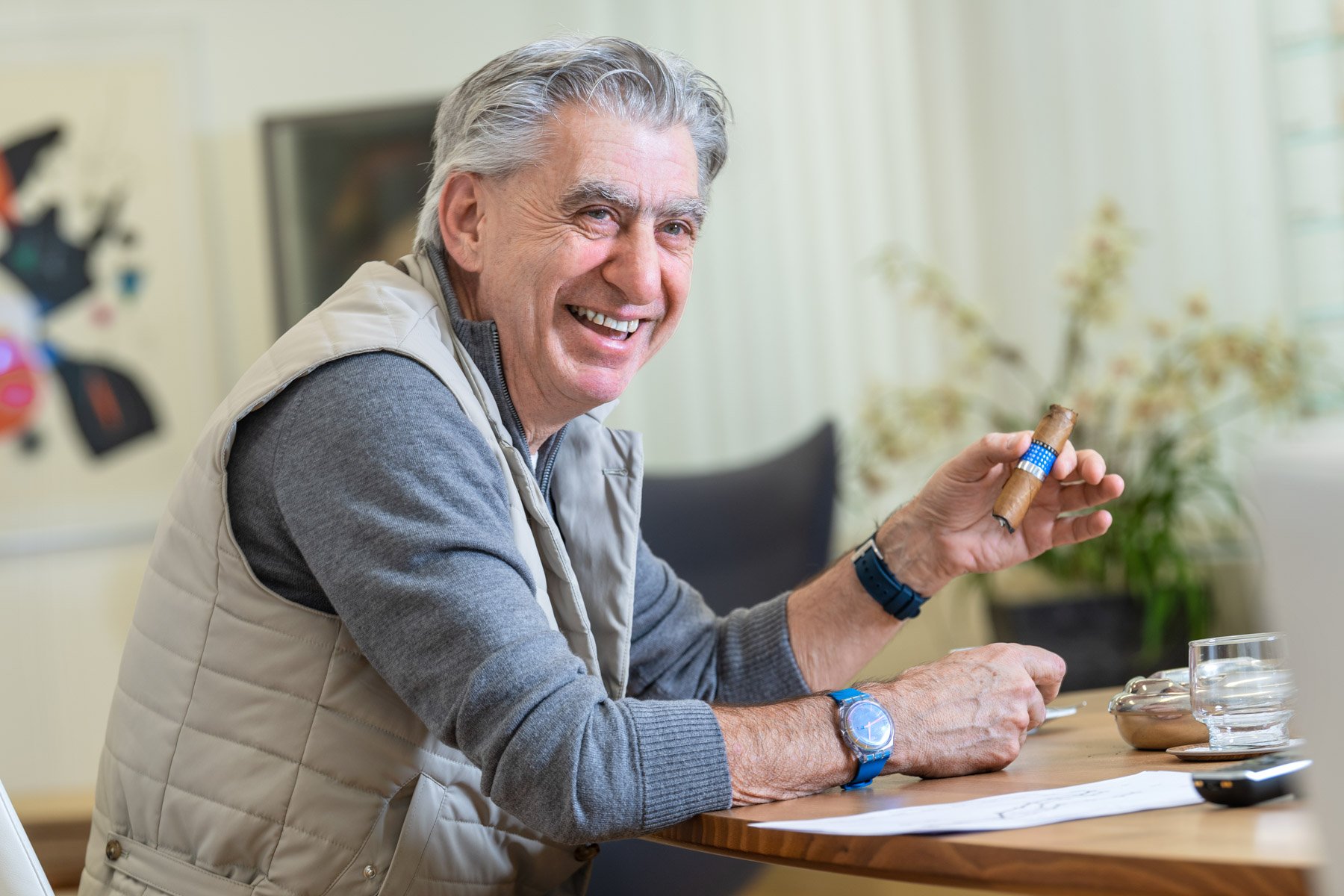 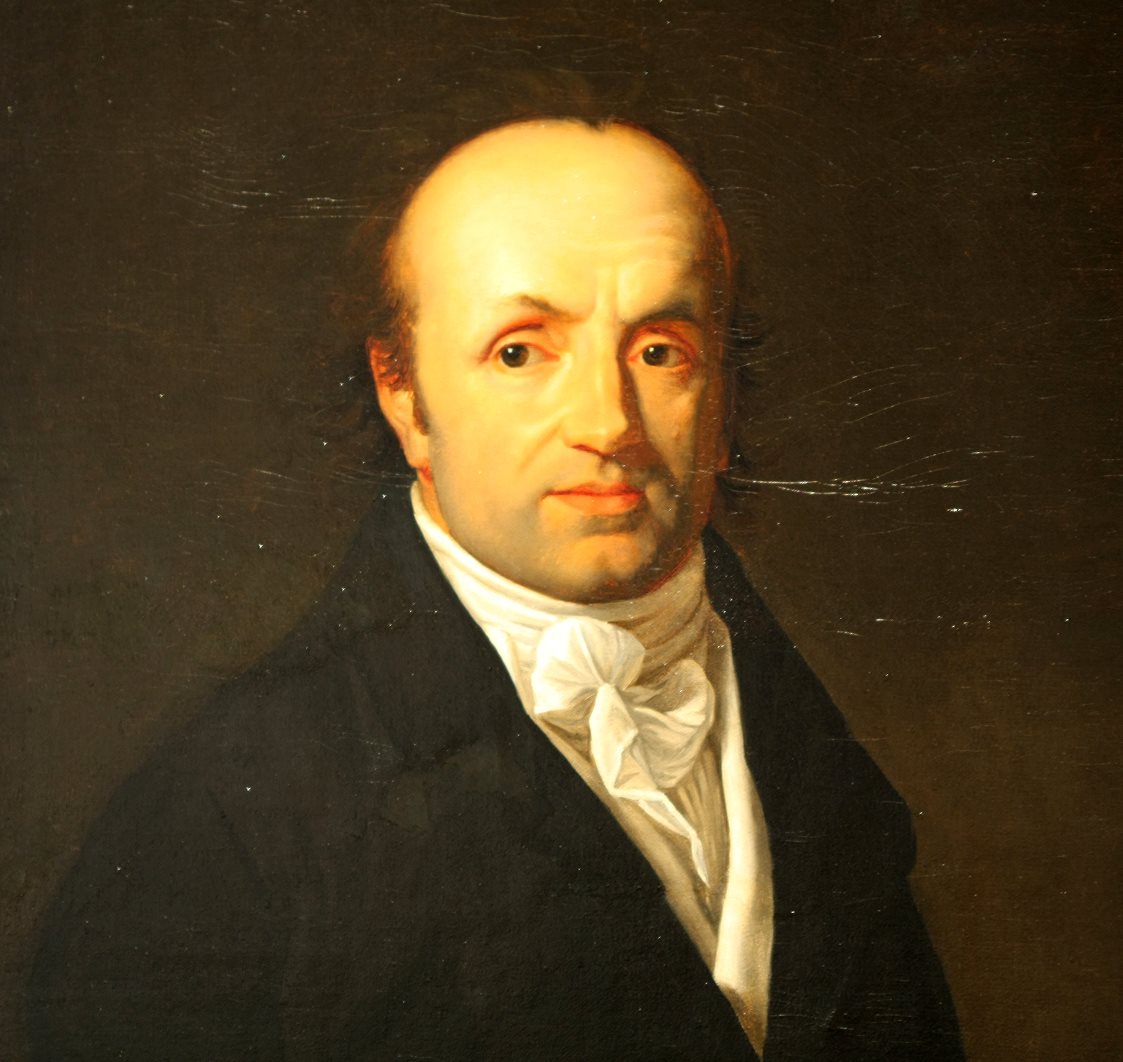 The aristocracy was decimated, but he found a new clientele in the rich bourgeoisie. And later, Napoleon Bonaparte became an owner of a Breguet timepiece, and so did the Duke of Wellington, who defeated Bonaparte at Waterloo on June 18th, 1815. Breguet also called Empress Josephine a client, and in 1814, Breguet was made Watchmaker to the Royal Navy of France. Plenty of ingredients for a historical action movie or Netflix series, I reckon.

It’s a good thing that Nick Hayek — CEO of Breguet’s mother company Swatch Group and son of its founder, Nicolas G. Hayek — studied at the Paris Film Academy. He directed the 1992 movie Family Express with Peter Fonda. And I think he’s the man to direct either Breguet: The Movie (or Breguet: The Series if it will be a streaming-service thing). I’m sure he still has plenty of connections in the movie business to make it happen. I can’t wait to watch that action-packed historical spectacle — The Three Musketeers meets Iron Man — on the big screen!