Does anyone else hear the Jaws theme?
Ignacio Conde Garzón
comments 36
Share

I’m starting to think I might have a very specific type when it comes to watches. The Omega Seamaster GMT “Great White” 2538.20.00 is a watch that certainly ticks all the boxes. It’s a rugged stainless steel sports watch with plenty of water resistance and a GMT function. It has the classic Seamaster looks, but with a twist or two that make this a very attractive piece indeed. However, the fact that I’m writing about it in this article means one thing — it’s no longer in production. Omega axed this particular model sometime in the early 2000s, and that makes me very sad indeed. But I’m sure we can all agree that the Omega Seamaster GMT’s comeback is long overdue. And when the time (hopefully) comes for it to return, I hope that Omega will do the “Great White” justice, and bring this colorway back into production.

Now, you all know that I’m a sucker for the Rolex Explorer II 16570. It’s my grail watch, and one whose rising prices have me sighing deeply every time I search for one online. You also know that I’m quite partial to a rugged dive/GMT watch. I already expressed my deep appreciation for the sword hands of the Seamaster 2254, and my desire to see them return to Omega’s lineup. The Bremont Supermarine 302 was one of my favorite watches that I had a chance to review this year. And even though, at the time, it wasn’t new anymore, I still very much enjoyed having it on my wrist. That said, its black dial and orange accents didn’t quite cut it as an alternative to the 16570. But could the Omega Seamaster “Great White” be the answer to my grail watch dilemma? 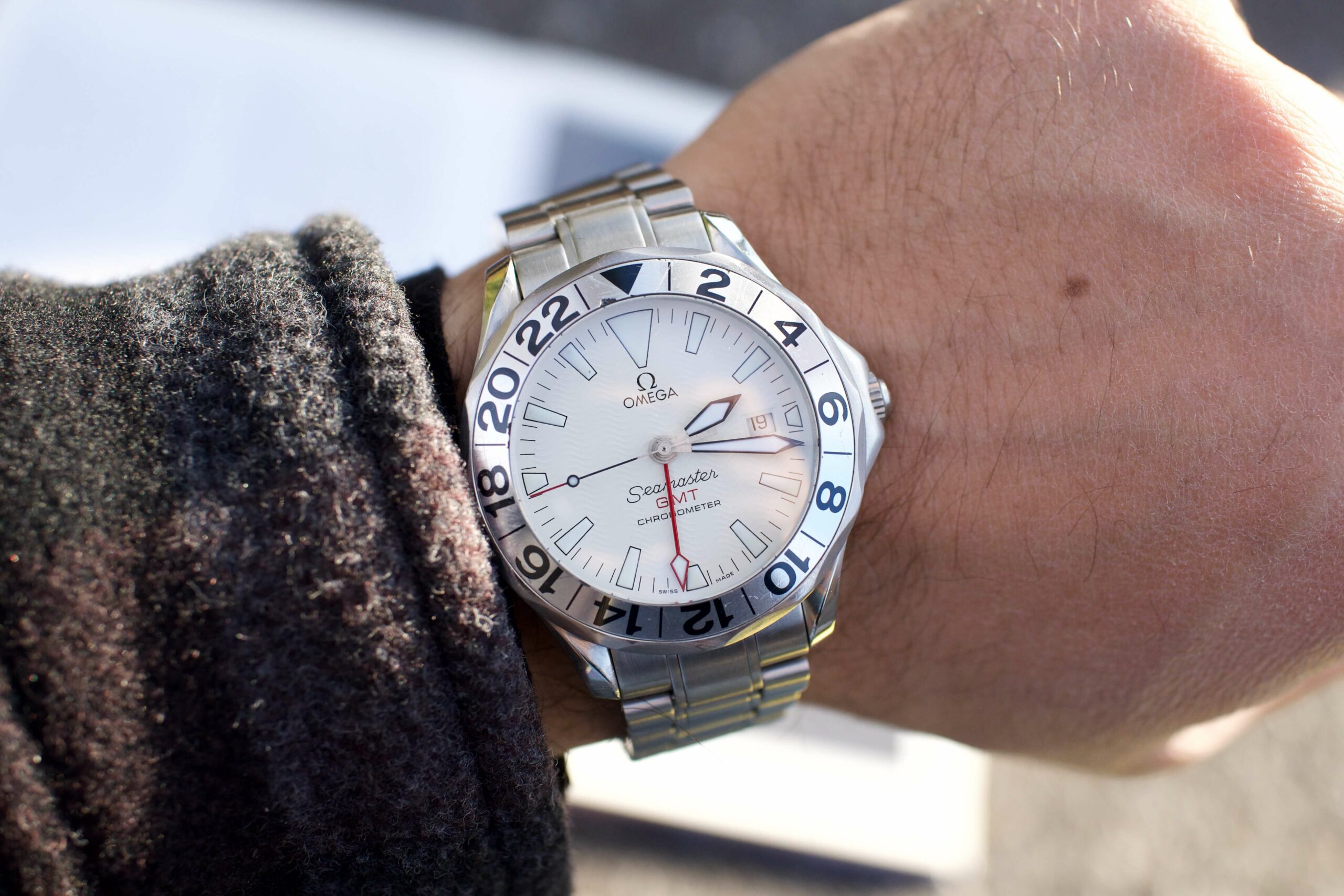 This Seamaster GMT certainly comes as close to the iconic 16570 as any watch would dare, and in some ways even offers some advantages. If you’re not sold on it from the pictures alone, allow me to shine a light on some of the details that make this watch so special. I’ll start with the obvious, which is the fact that the Seamaster GMT has the undeniable charm of the 2254, and then some. It features the same sharp sword hands, the same wave dial, and a very similar dial layout, including the big pizza slice of lume at 12 o’clock. Or is it more of a shark’s tooth? Either way, this Seamaster GMT earned the nickname “Great White” long before this was used for the modern white-dialed SMP 300. 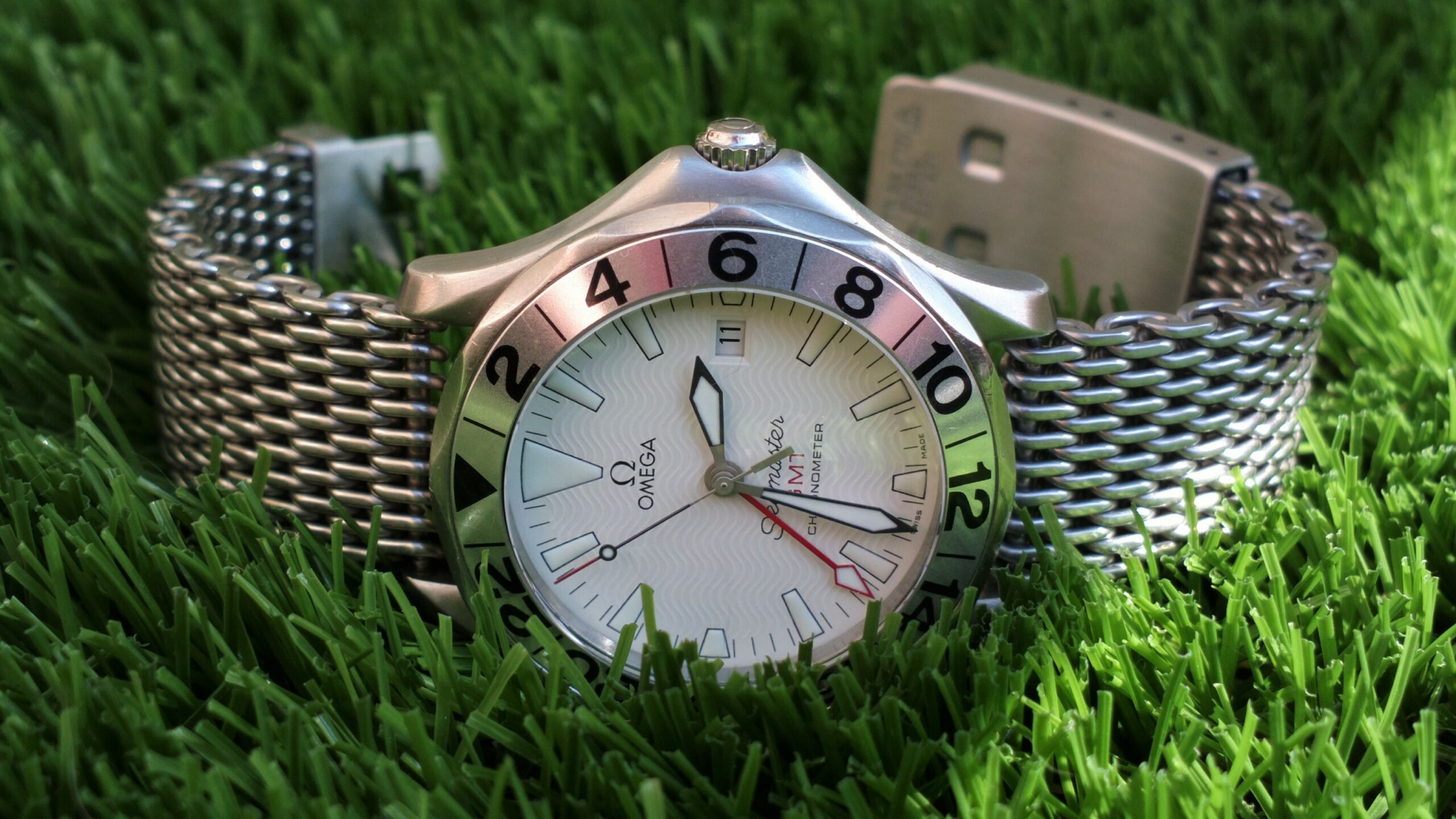 Image courtesy of Tet on the Omega Forums

There are some slight changes on this watch as opposed to the Seamaster 2254. For example, the dial text is slightly different. Instead of “Professional 300m/1000ft”, it’s “GMT Chronometer” with “GMT” in bright red letters. This red is matched by the seconds hand tip, as well as by the brilliant spear-like GMT hand. All three of the standard time-telling hands are given a black outline to increase contrast with the stark white dial and improve legibility even in the most adverse conditions. The black dive bezel of the 2254 makes way for a metallic 24-hour bezel with big, bold numerals. The final touch, and one that I very much appreciate, is the lack of a helium escape valve. Regardless, the watch is still rated to 300m of water resistance. 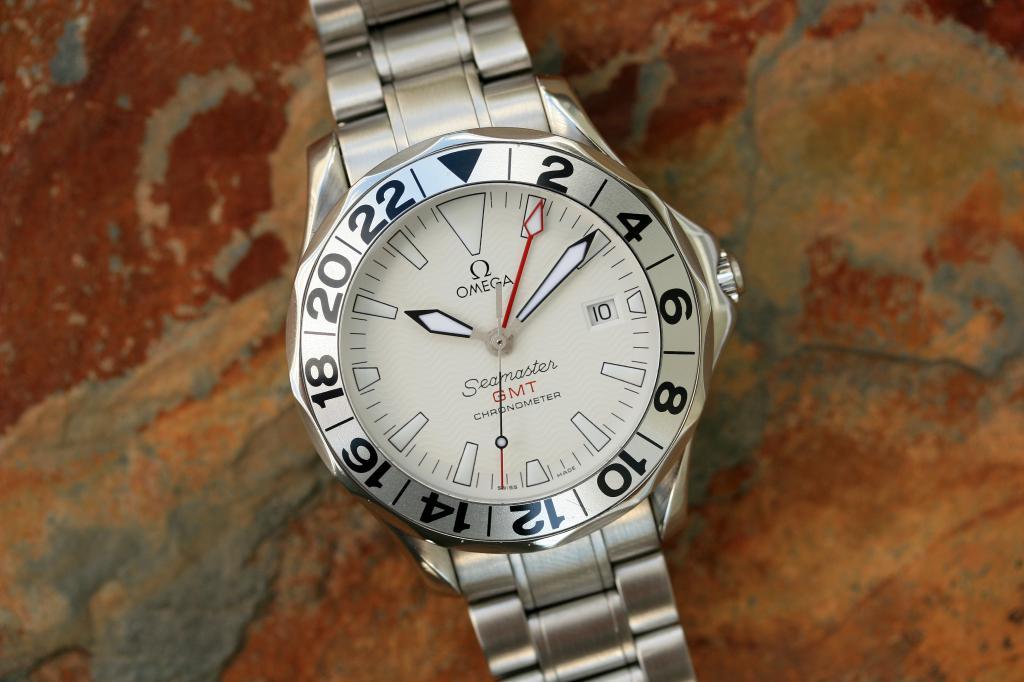 For me, the Omega Seamaster GMT is close to being a perfect watch. It has the familiar and slimmer 41mm Seamaster case from the ’90s and early ’00s, it has plenty of the same appeal that draws me to the Rolex 16570, and it’s a watch you certainly don’t see every day. The last part, which I almost don’t dare to mention, is that these are still out there for a reasonable price. A quick search on Chrono24 shows that they are out there in the low €3K price point. And though historic pricing is depressing to look at (these could be had for less than €2,000 not long ago), I still can’t help but think that it would be great to see a modern version of this watch or even the 50th-anniversary model.

That particular model is also appealing, but for me, nothing beats the white-dialed version. Unfortunately, I don’t have a render of how that one would look brought into the modern SMP 300 form factor, but with the case and dials being so similar, I’m sure it would work, and that it would become an extremely popular model. If the vintage one alone is almost enough to derail my quest for a 16570, I think a modern re-release would certainly do the trick. Ahead of writing this article, we discussed the Seamaster GMT in the office, and the opinion was unanimous — this is a watch that is ready to return. For me personally, I’d love to see a Seamaster GMT that retains the dive bezel, yet adds the 24-hour scale to the rehaut, making it an even more versatile watch. 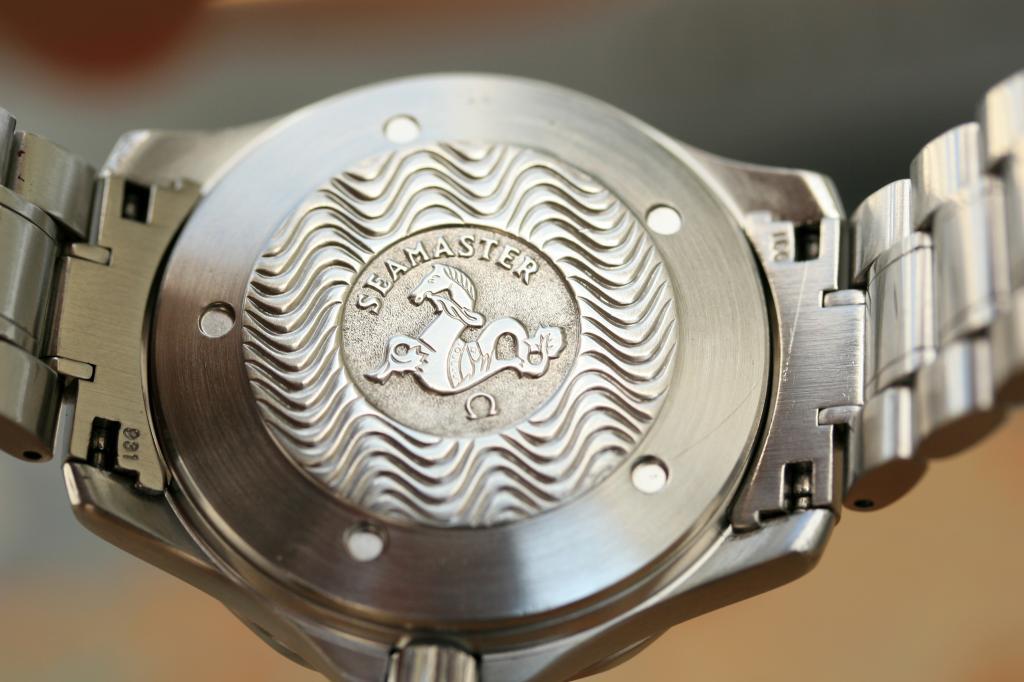 Well, there you have it! The Omega Seamaster GMT “Great White” 2538.20.00 is a watch that I’d love to see come back in the not-too-distant future. It’s an undeniably cool piece that ticks every box when it comes to what I personally look for in a rugged sports watch. And should it not return, I don’t think I’ll be able to resist one of the older models on offer online. Just like with most watches out there, prices do nothing but go up, so if you agree and also find this to be one of the best watches in Omega’s back catalog, you’ll have to be either quick or patient… Depending on how optimistic you are about seeing the “Great White” return.

Am I crazy? Or do you, our dear Fratelli, also agree that the Seamaster GMT is long overdue a glorious comeback? Would your pick be the “Great White” or the 50th-anniversary black-dialed version? As always, share your thoughts in the comments below.