Time has passed, the seasons have changed, and though it has not yet been a full year, Fratello Collector’s Week is back! You might remember that in the early days of February this year, we celebrated our very first Fratello Collector’s Week (FCW). The response from the Fratelli was overwhelming. The vast majority of you wholeheartedly enjoyed following along with our editors’ collecting journeys, hearing their advice, and learning from their mistakes. With that in mind, we decided to celebrate collectors once again this year. So today, we kick off Fratello Collector’s Week 2.0 — one more week all about collectors and collecting — with stories and advice from a handful of your favorite Fratello editors.

Stay tuned throughout the week, as we’ll be regularly dropping new FCW articles filled with sage advice, anecdotes, and other essential pearls of wisdom from our collective decades’ worth of experience in watch collecting. Whether you’re looking to learn more about anything from collecting Japanese watches to building a varied collection, we have you covered. Perhaps you’re feeling philosophical and are looking to understand what a watch box’s contents reveal about its owner. Or maybe you just want to hear about some of your favorite editors’ collecting journeys, mistakes, and what they’ve learned along the way. If any of this sounds interesting to you, you’re in for a treat this week! For now, I’ll allow myself to inaugurate Fratello Collector’s Week 2.0 with a short overview of my core collection and why I feel that (though a little bit all over the place) it’s perfect for me. 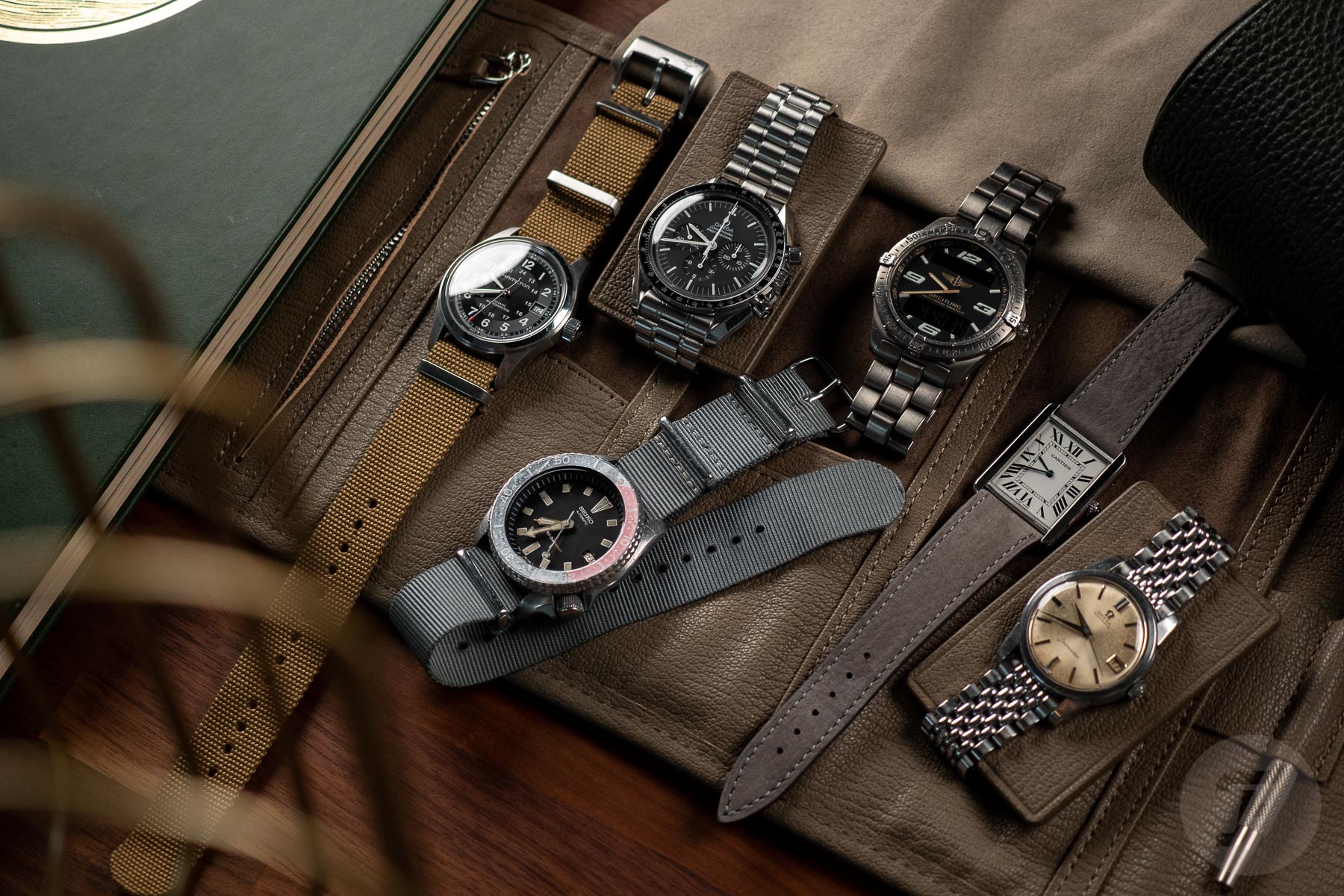 Like many of you out there, I own more watches than I care to admit. There are the oddball €50 pick-ups from my early days of scouring the classified ads for anything with a mechanical pulse. Then there are the not-currently-running heirloom pieces passed down from my grandfathers. These are watches rich in sentimental value that lay dormant, awaiting service and the day when they will be worn again. Oh, and then there’s the infamous box, dubbed by RJ as “the box of watches I never wear.” And don’t get me wrong, it can be a lot of fun to pull one of these pieces out on occasion and wear it for a day or two. But mostly, my collection is made up of a handful of core pieces — those that I consider my “actual” collection. 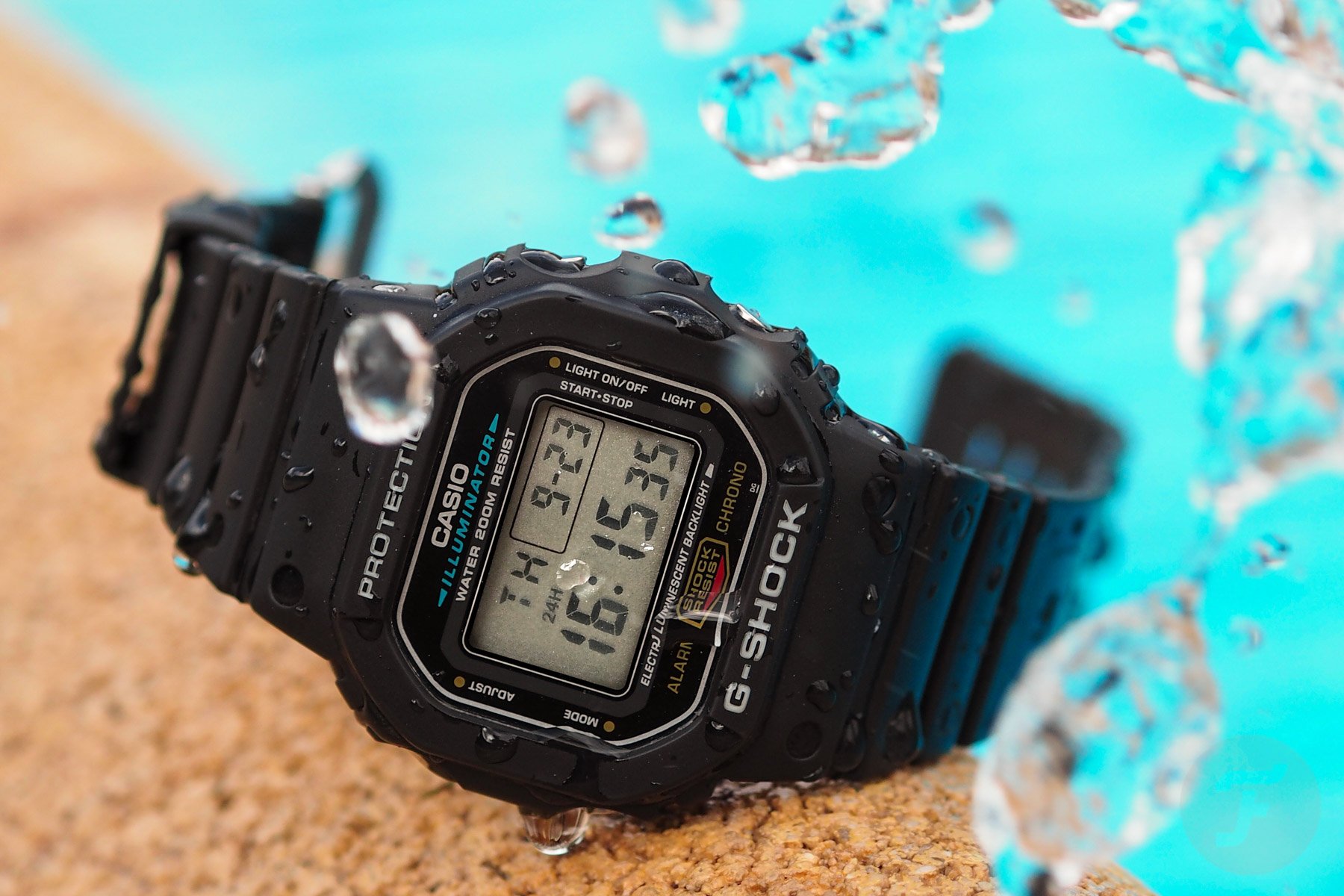 These pieces have often come into my possession in what I consider a somewhat unusual way. As much as I tend to plan and overthink future watch purchases, I am also a serial opportunistic impulse buyer. My latest three purchases are perfect examples of this. Sometimes a short-term and sudden obsession turns into a hunt, resulting in a relatively unplanned purchase, instant gratification, and deep satisfaction. This does mean that my collection ends up looking a bit like a patchwork of random watches. Not like others’ collections, which appear to be perfectly curated museum-worthy gatherings of timepieces. However, having reflected on my collection ahead of this article, I realized that I’m very happy with it as it stands and also with the direction that it’s headed. 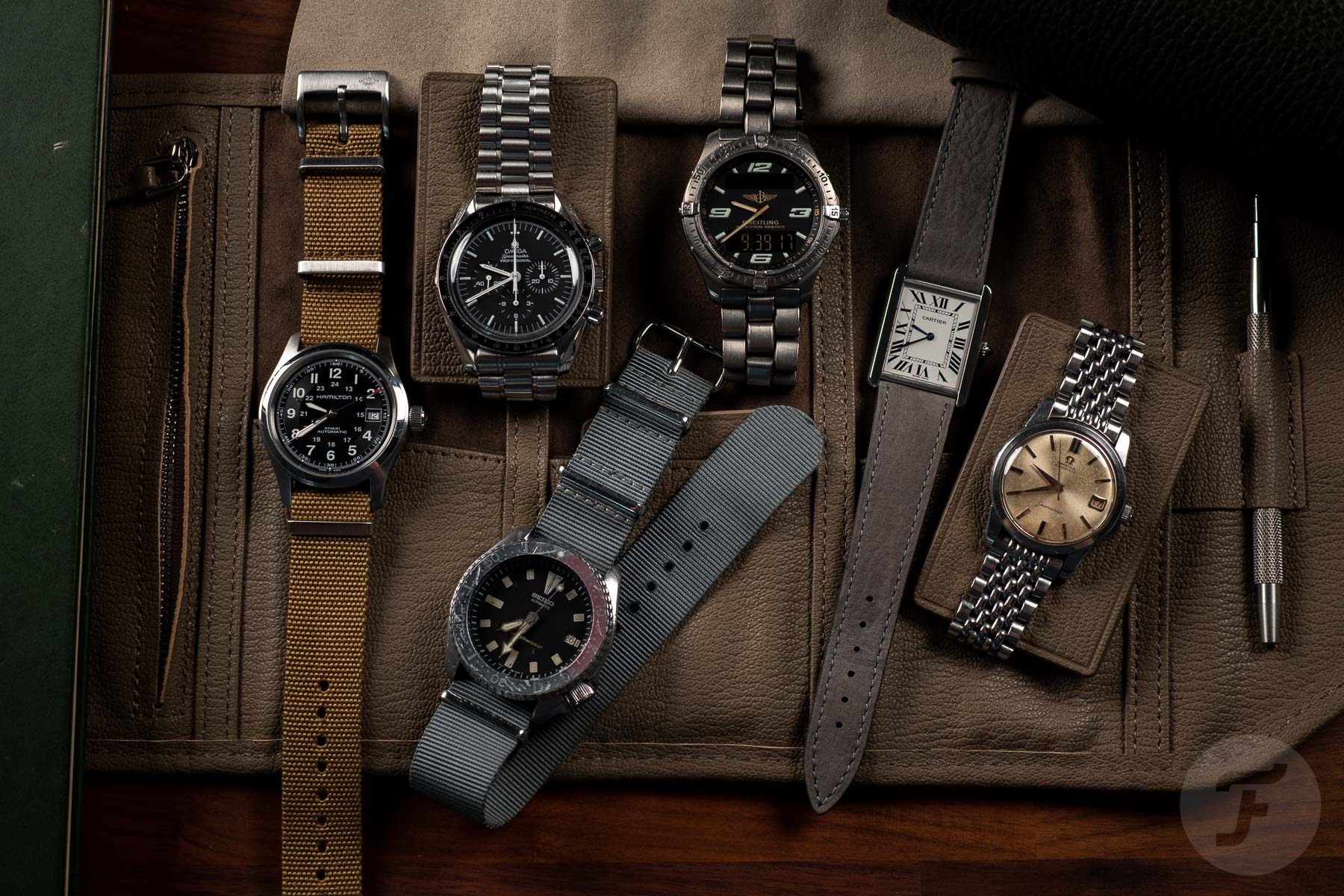 Cutting to the core

As I said before, I own many more watches than I care to admit. Most of them don’t get worn, and many remain in my possession due to sentimental value. The other reason why many watches stay is that selling them is more trouble than it’s worth (call it a lack of value). However, I tend to only look at a small selection when I think of my collection. Most of us would call it the “core” of our collections. Not only do these watches get worn the most, but they are also the most valuable and those with which I feel the strongest bond. In the current state of things, six watches comprise said core.

This number will grow. It’s inevitable. But I feel that it won’t do so by much. Watches will come in and out of favor, and maybe even in and out of the core itself. But chances are that most of these will remain in my collection indefinitely. 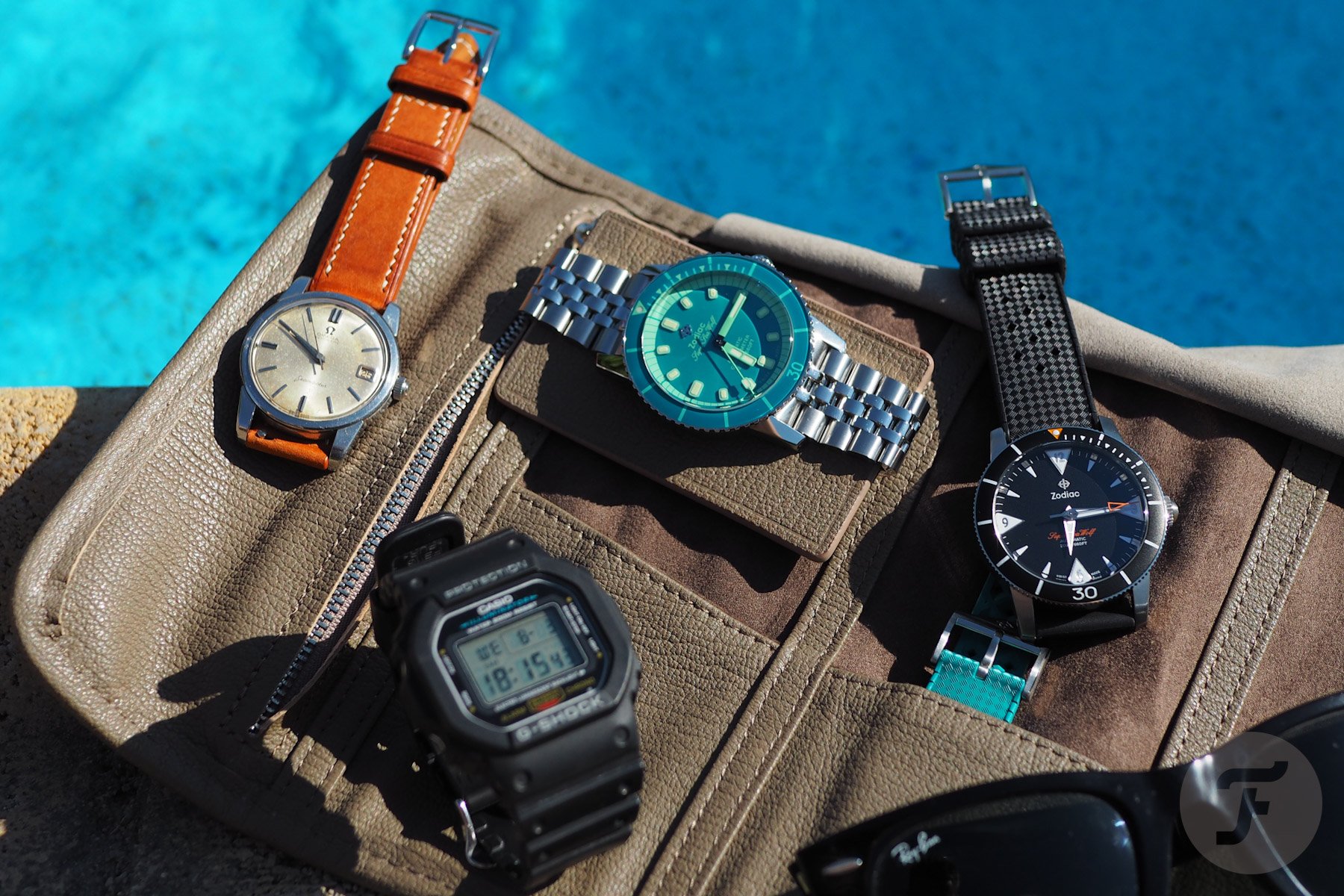 I can feel the anticipation building and slowly shifting to impatience. “Tell us what the watches are! We’ve had enough preamble!” Well, I agree; it’s time to talk watches. For the sake of this article, I’ve categorized them into three categories — Tool Classics, Daily Beaters, and Small & Dressy. This is more for the sake of structuring this article than anything. I feel that they could be grouped in any number of ways, but this is what I’ve gone with today to keep this write-up brief and avoid too much meandering. So, without further ado, let me take you through the six watches that comprise the core of my collection. 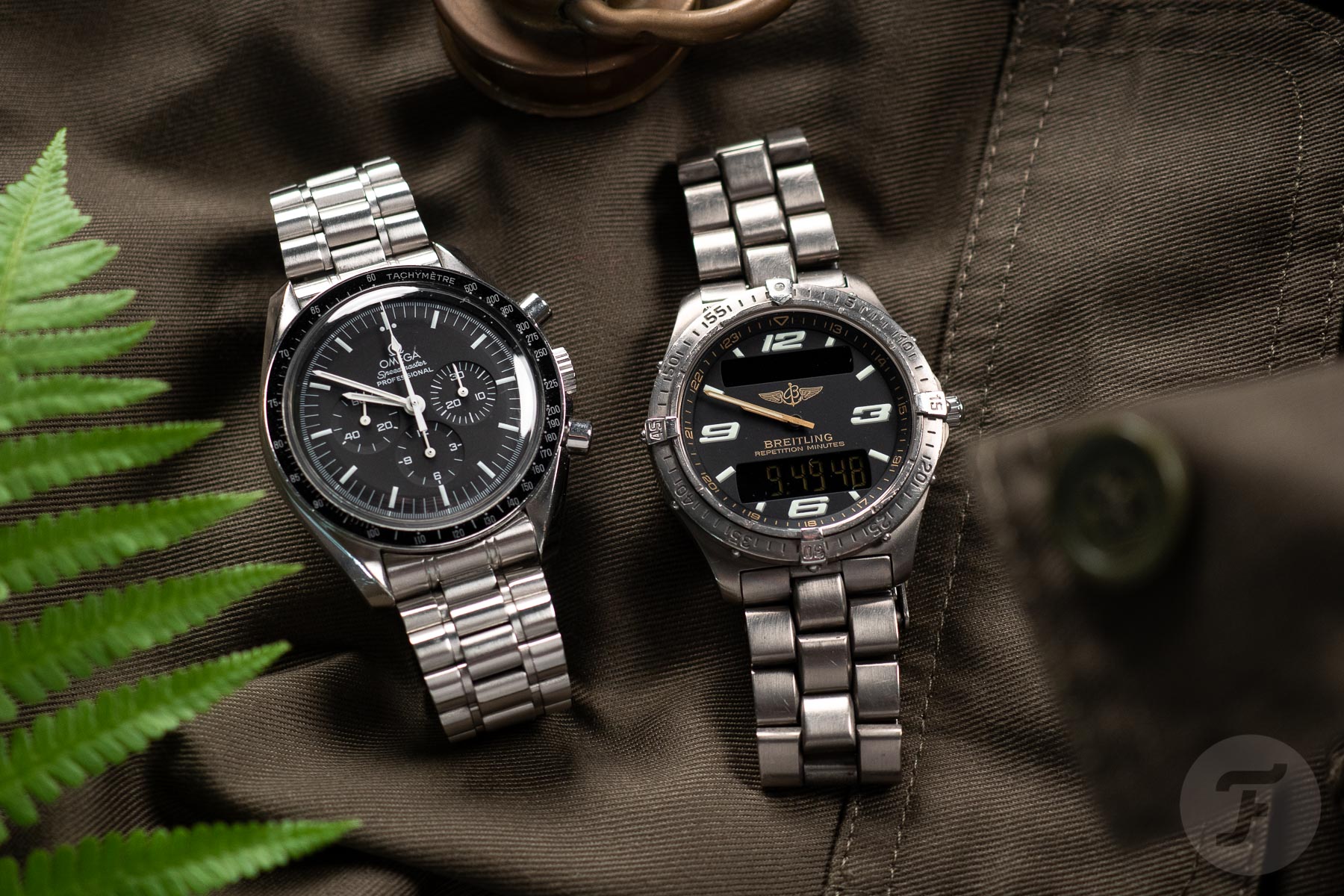 These two watches are my most no-nonsense, ever-capable tool watches. Both pack several features beyond basic timekeeping. I don’t need to say much about my Omega Speedmaster, as there’s not much you haven’t heard about it already. My Speedmaster (there are many like it, but this one is mine) is a 2000–2001 reference 3570.50.00. Inside, the classic 1861 movement keeps time well, gaining only a few seconds each day. This was my first big watch purchase. At least the first that went beyond three-figure sums I had previously spent (€465 being the previous benchmark). I saw it as a commitment. Not just to ownership of the watch, but to watch enthusiasm itself. When I first put my Speedmaster on, I felt for the first time that I was serious about watches. Almost two years later, it still puts a smile on my face every time I wear it.

A more recent purchase, my Breitling Aerospace F65362 has become an unexpected favorite in my collection. After (somewhat impulsively) buying it in November of 2021, I had a hard time wanting to wear anything else. It was slim, lightweight, and distinctly purposeful. Yet despite its aeronautical roots and rather stark aesthetics, I always find the Aerospace to be an undeniably fun watch. The thing has a built-in digital minute repeater that tells the time with a series of beeps at a press of the crown. I have not yet written a full article about it on Fratello, as I want to do it the justice that (I feel) it deserves. But I’m sure it will be on the site sooner rather than later. A bit of an oddball frankenwatch version of the F65362, I absolutely love my Aerospace. 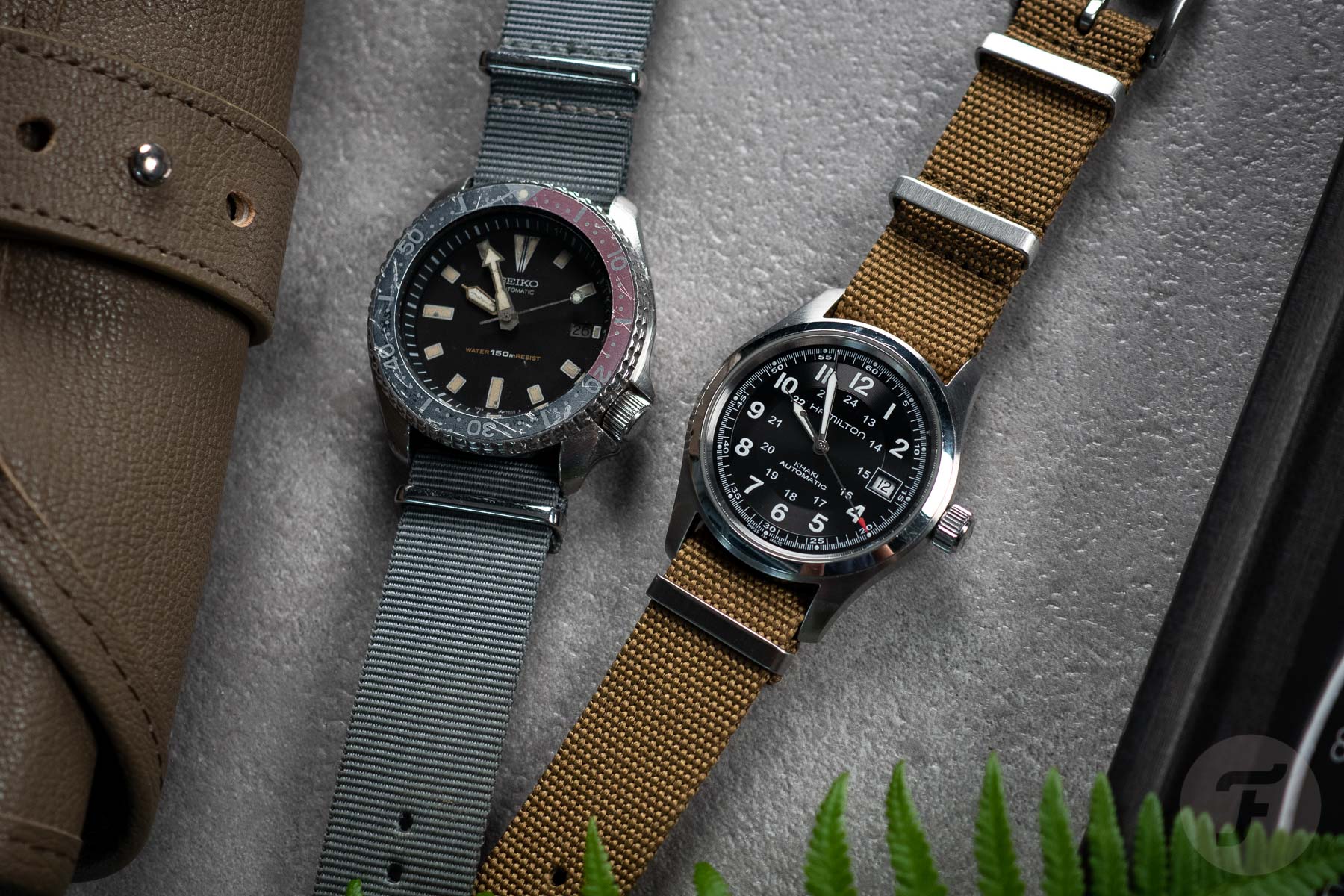 A collection is not complete without at least one “everyday” watch. In my case, I have a couple that I look at in this way. These are the watches that I can grab and go, the ones that simply never let me down. Whether for a long hike, a weekend away, or a bike ride through town, you can’t go wrong with these two. The first is a cool old Seiko 7002 dive watch from 1993. I’ve already told the story of this watch’s “reverse restoration” on Fratello before. In fact, it was one of the first articles I wrote for the site. As much as I love the classic SKX, there’s something extra cool about its predecessor. It’s a watch that begs for a closer look, likely to check out its many battle scars. This is a watch that puts a smile on my face every time I wear it.

My other “daily beater” is my Hamilton Khaki Automatic. I bought it earlier this year from a good friend and Instagram buddy (@rs_shots). There was something about Hamilton’s 38mm field watches that always captured my curiosity. I remember looking for Vietnam-era versions on eBay in my early collecting days. Their often heavily patinated dials and yellowy cracked crystals gave them a ton of charm. However, these were a bit smaller at 34mm and often a bit more expensive than I was willing to pay. When the opportunity came along to buy a modern one for a very reasonable price, I couldn’t refuse. Since then, rarely has a week gone by where it hasn’t made its way onto my wrist. With an 80-hour power reserve, automatic movement, and classic field-watch looks, it really is a perfect everyday watch. Do I wish the crystal had better AR? Sure. Do I wish the case was fully brushed and the hands were painted white? Definitely. But in its imperfection, I have found a watch worthy of becoming a reliable part of my core collection. 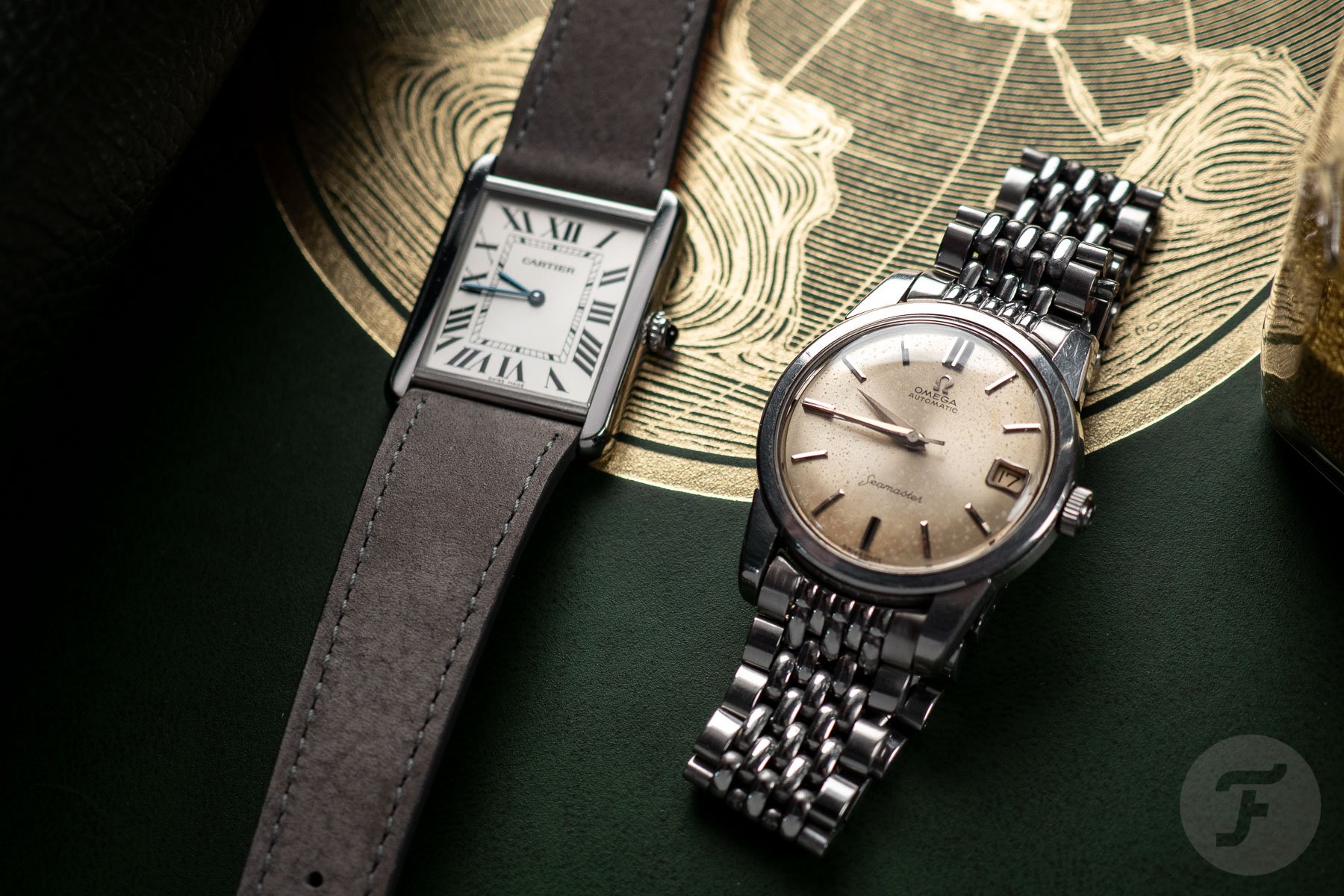 The final part of my collection has seen a lot of watches fall into and out of favor. Even now, it’s hard to narrow it down to just two. There are at least two or three more vintage dress watches (or at least smaller vintage watches) that could have made the cut here, though definitely not in favor of the Cartier. However, the Omega Seamaster 14762 is my current vintage favorite in the collection, and therefore is my pick for the core. Going back to my Cartier Tank Solo, I have already told its story on Fratello here. Having now worn it rather extensively, I can say that it has become one of my favorite watches. I don’t necessarily wear it as a dress piece, as it can easily be dressed down with the right strap (as seen above on the Fratello Grey Nubuck strap).

My latest watch purchase (as of writing this article), the 1961 Omega Seamaster 14762 is a watch that never disappoints. Its 34.5mm case wears bigger than one might think due to the broad-shouldered, beefy-lug case. The dial shows a generous helping of patina, which contrasts nicely with the sharp glimmering markers and applied Omega logo at 12 o’clock. I blame Thomas’s article on his vintage Seamasters for pushing me over the edge on this one. That said, there’s no regret associated with that purchase, just a lot of joy whenever I put it on my wrist. Whether on the Omega beads-of-rice bracelet or on a leather strap, I really can’t think of a better sporty dress watch with plenty of vintage mojo. If you can get your hands on one of these, don’t hesitate to do so. 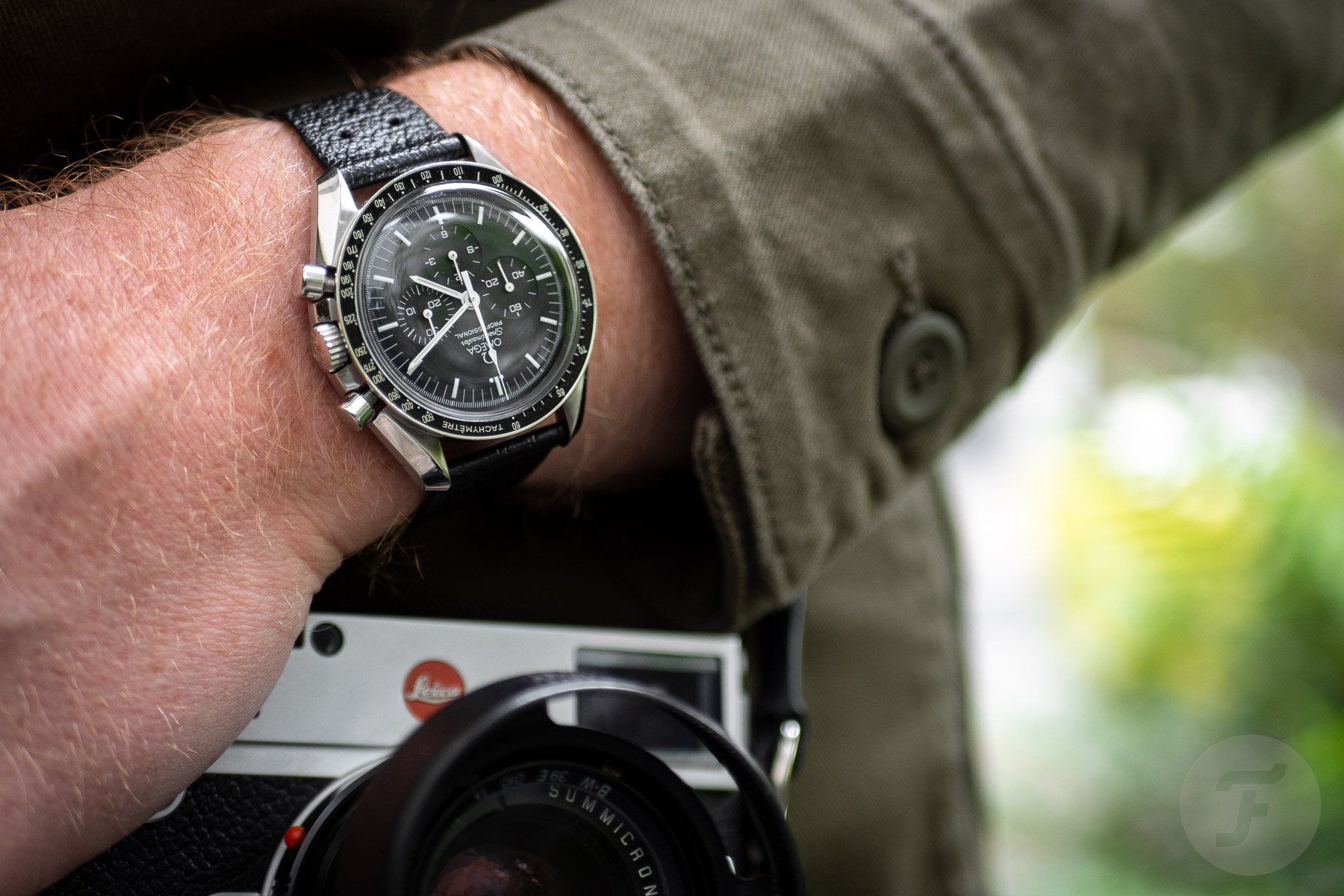 There you have it! Though I don’t consider myself a collector per se (due to the somewhat random nature of my collection and my definition of what being a watch collector means — you can read more about this in my last FCW article here), this is my contribution to Fratello Collector’s Week 2.0. I hope you enjoyed this tour of the core of my collection. These watches mean the most to me and get the lion’s share of time on my wrist. If you ever bump into me at a meetup, press event, or on the streets of The Hague, chances are that I’ll be wearing one of these six watches. Will it remain six for long? Well, with three rather special pieces on their way to me in the next few months, I doubt it. But you never know… It’s not easy becoming part of the core! 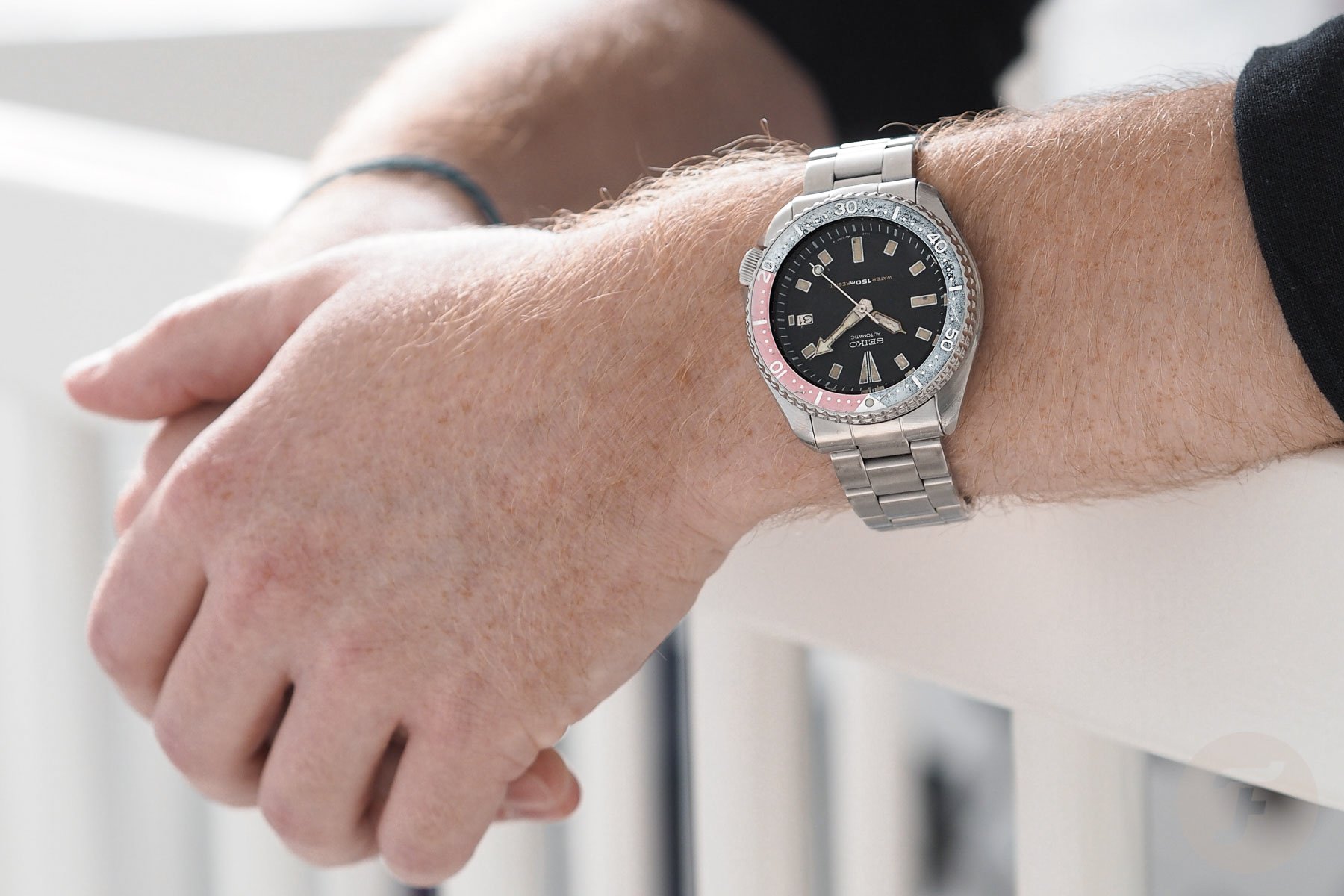 Do you also have a selection of watches that you consider the “core” of your collection? What test must a watch pass or what criteria must it meet to become a part of that core? Do you think of your collection in a totally different way? I’d love to hear about it in the comments below.

Remember, this whole week, other Fratello editors will be sharing their collector’s stories, advice, regrets, and more as part of Fratello Collector’s Week 2.0. Just keep an eye out for the articles marked with the FCW logo, and stay tuned for a lot more great content coming your way!