Sophia Loren (Rome, 1934) went from an Italian starlet to an international icon. Her astounding and distinctive beauty captivated fans as soon as she appeared on the scene in the 1950s. And in 1962, she won an Oscar for her role in the Italo-French war drama La Ciociara. From competing in a beauty pageant judged solely on looks to being named one of the greatest female stars of Classical Hollywood cinema by the American Film Institute is quite a remarkable feat. The Roger Dubuis Excalibur MB Black Ceramic 42mm is like Sophia Loren in a beauty contest. The extremely photogenic watch is judged by its spectacular looks alone and not by what’s inside. Luckily, the Excalibur MB Black Ceramic is skeletonized, so it allows a close look inside. And it’s a look that’s well worth the time for every fan of high horology.

You could blame the watch for not being judged correctly on all of its merits. I mean, come on; the dazzling appearance of the Roger Dubuis Excalibur MB Black Ceramic 42mm is quite a bit to take in. It’s so striking, so sharp, and so original that the traditional way of looking at an Haute Horlogerie creation just doesn’t suffice. First, you need to cleanse your palate. After that, you need to open your mind. And then you need to find a magnifying glass because only by getting in close and deep will the €73,500 Excalibur MB Black Ceramic reveal its full beauty. It’s just as visually spectacular as the €153K Excalibur equipped with a tourbillon and executed in lavish Eon Gold. Is it a tad soberer due to its almost-industrial colorway? Sure, but it’s certainly no wallflower, and most definitely equally as bold and original as the precious-metal creation. 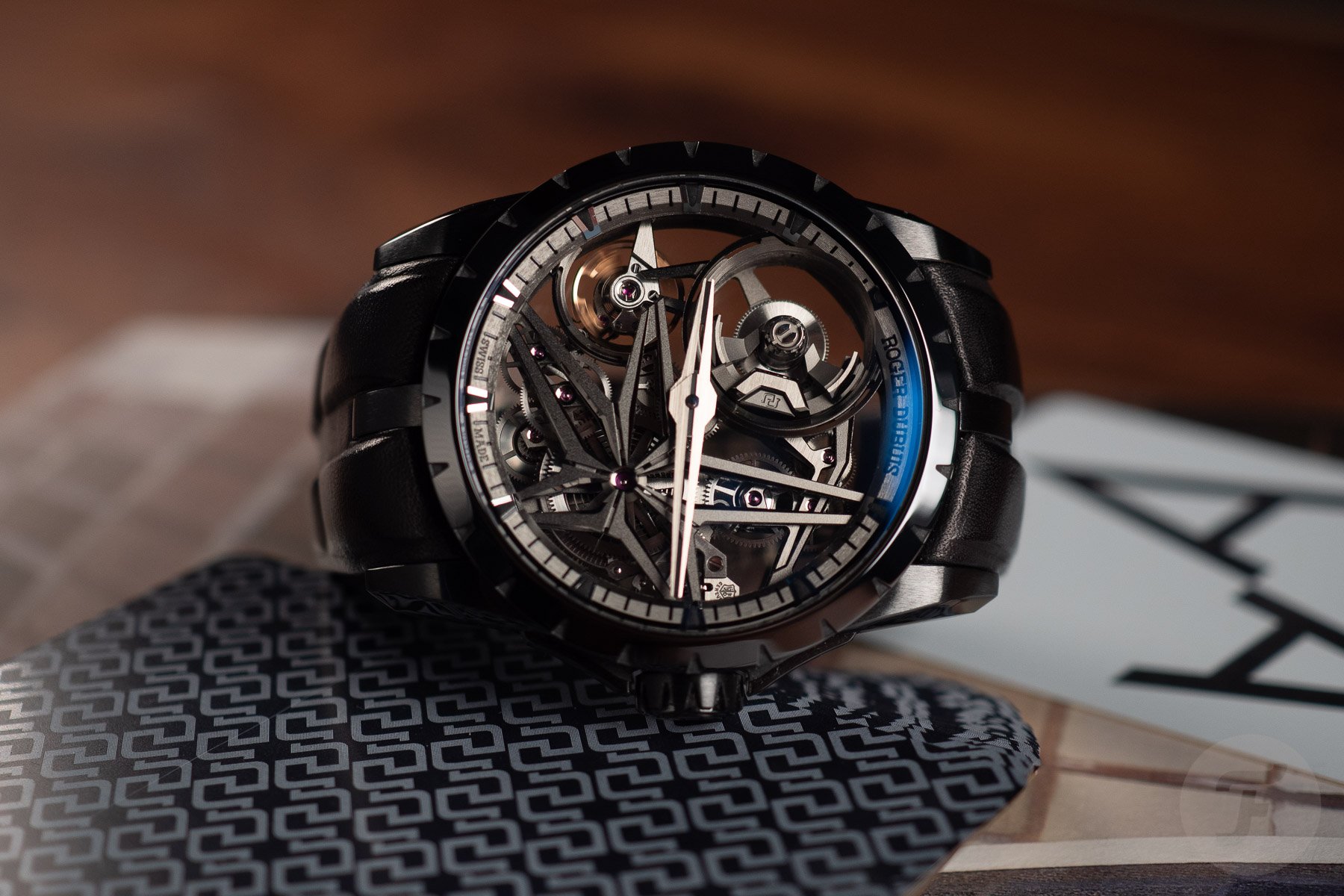 I did already write a little something about the Excalibur MB Black Ceramic 42mm in an installment of Coffee Corner Watch Talk. But the watch begged for more attention. And not just from me, but from a photographer, especially. The Excalibur, just like Sophia Loren, shines in front of the camera because it makes a striking first impression with its shiny black ceramic case, edgy notched bezel, and remarkable triple lugs. And at first, even the open-worked movement is more extroverted than anything. It takes a bit of calming down and a little effort to look past the design drama and get into the details, the hidden treasures, and the astonishing watchmaking. 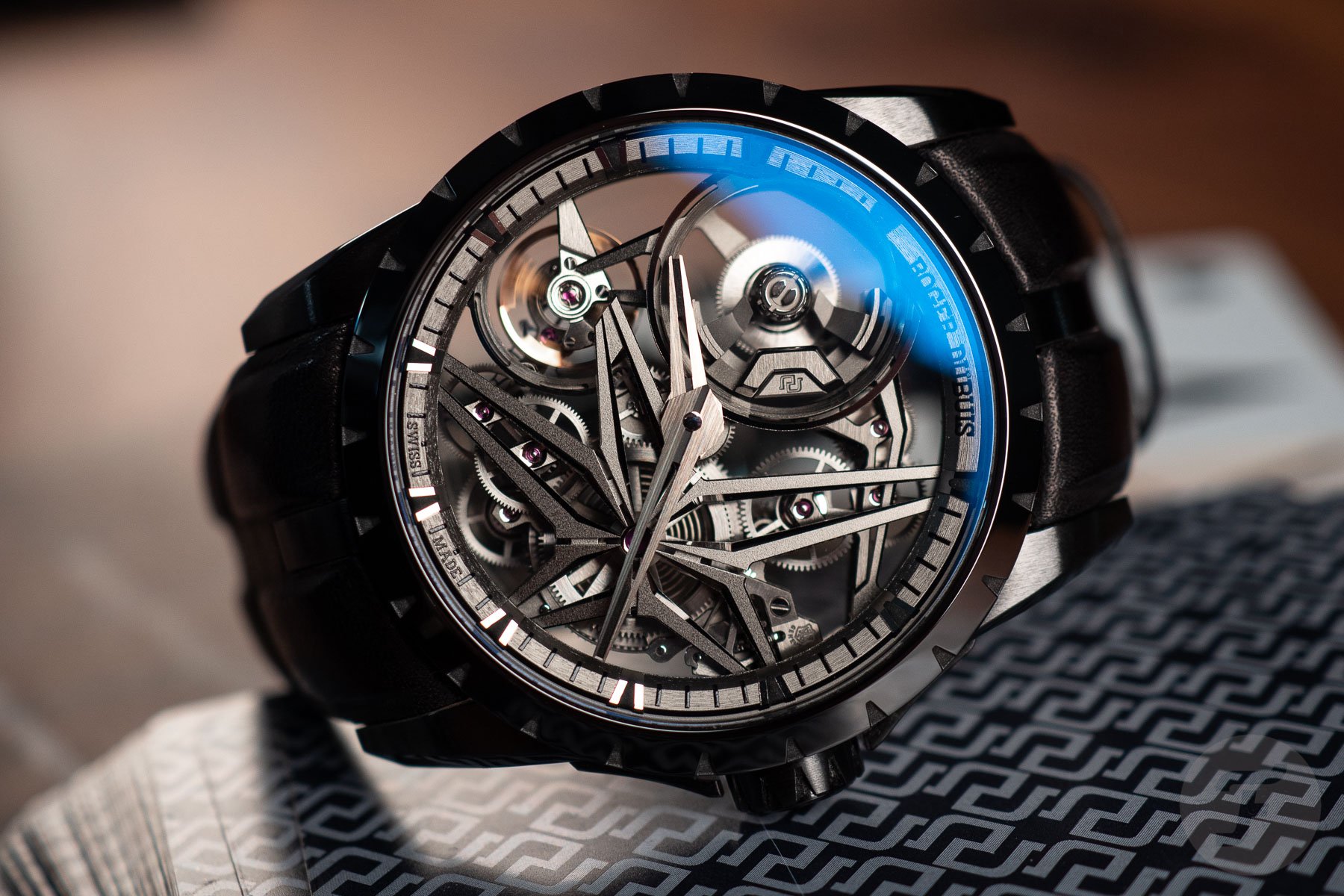 After provoking you — a Roger Dubuis Excalibur sure provokes the Fratelli, I can assure you — the Excalibur MB Black Ceramic charms you in an irresistible way. Even the skeptics at Fratello HQ had to admit that the 42mm watch was not only surprisingly balanced in terms of aesthetics but also a very pleasurable, comfortable wrist sensation. 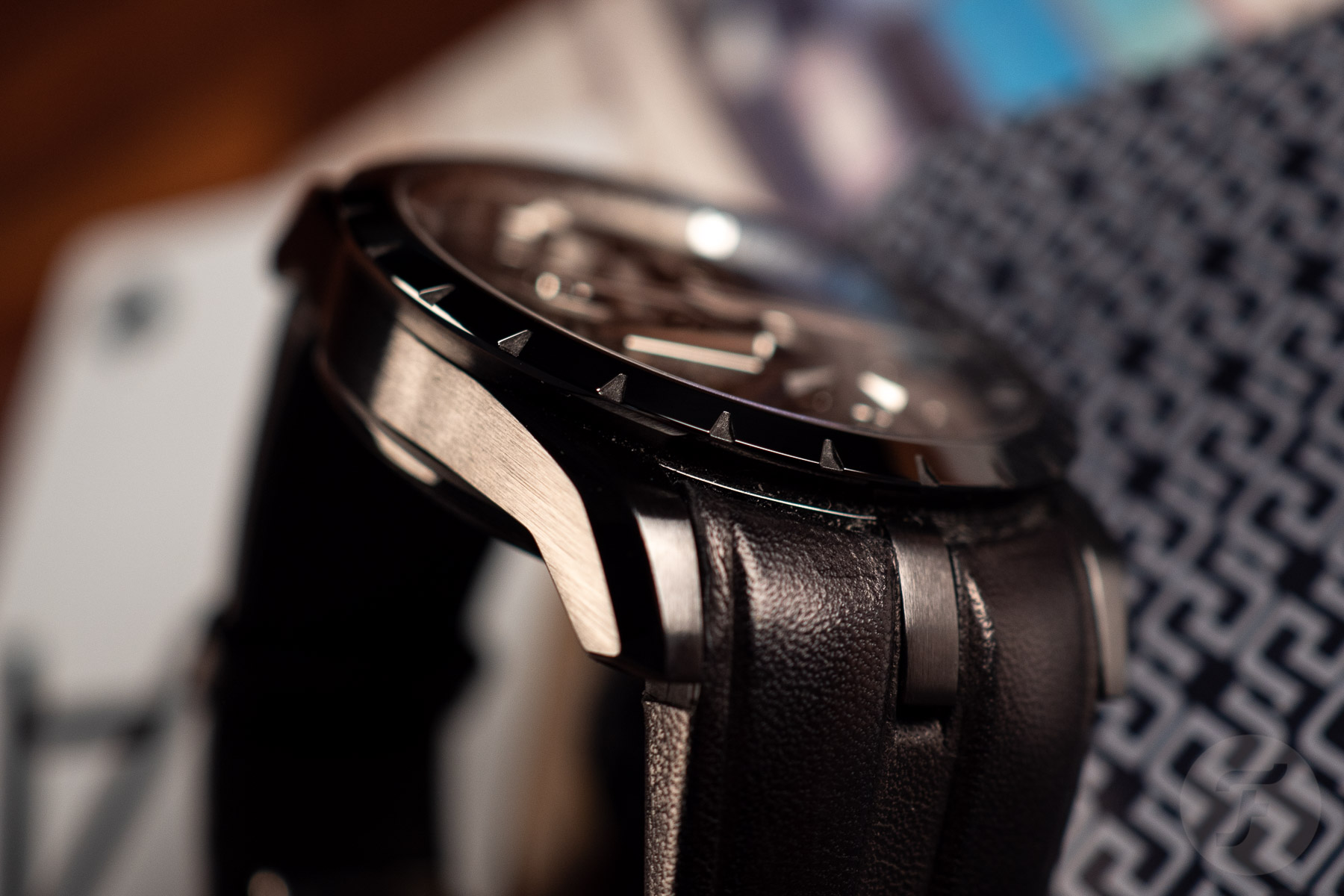 From hyper to serene

Roger Dubuis presents itself as the creator of hyper horology, and the brand sure has products that live up to that. How about making straps from Pirelli Formula 1 tires that were actually used on the racetrack or the 12 micro-sculpted knights that function as hour markers in the Knights of the Round Table collection? By loud statements such as these, watch fans on the purists’ side of the spectrum tend to turn their eyes away —roll them, even. The management at Roger Dubuis, however, probably doesn’t lose sleep over not fitting in with the conservative crowd. 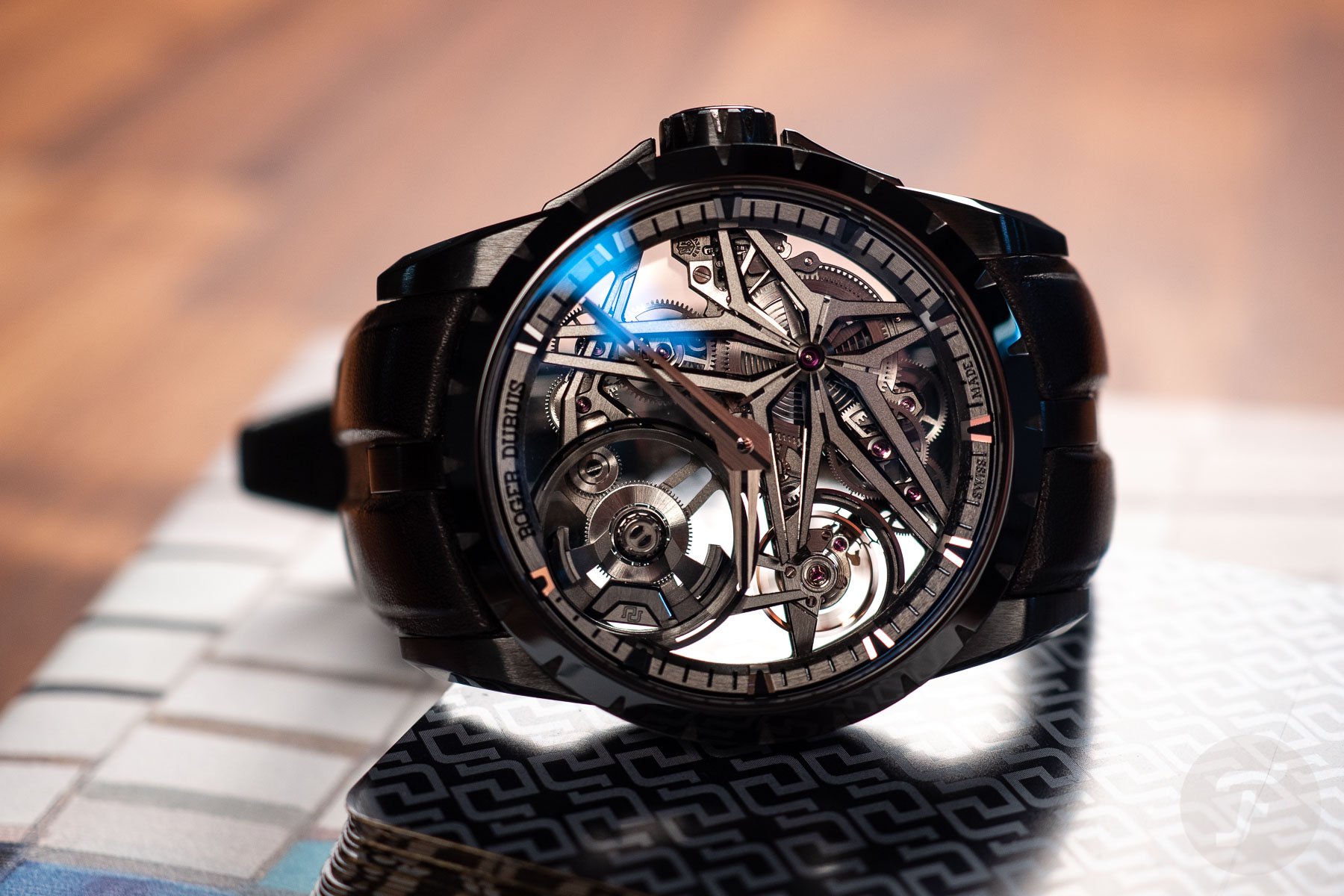 The watches are aimed at — and I’m taking an educated guess here — self-made millionaires. Young ones. People in their thirties who drive bright orange hypercars made in Sant’Agata Bolognese. People who wear designer clothes that say/shout “designer clothes!” People living and behaving in ways that result in as much pleasure as possible. You see, for hedonists driven by the belief that the most important thing in life is to enjoy yourself, a Roger Dubuis is the perfect timekeeper. Does that sound shallow? I wouldn’t dare call ancient Greek philosopher Epicurus, Austrian founder of psychoanalysis Sigmund Freud, and English philosopher and political economist John Stuart Mill, great minds who argued for varieties of Motivational Hedonism, shallow. Would you? 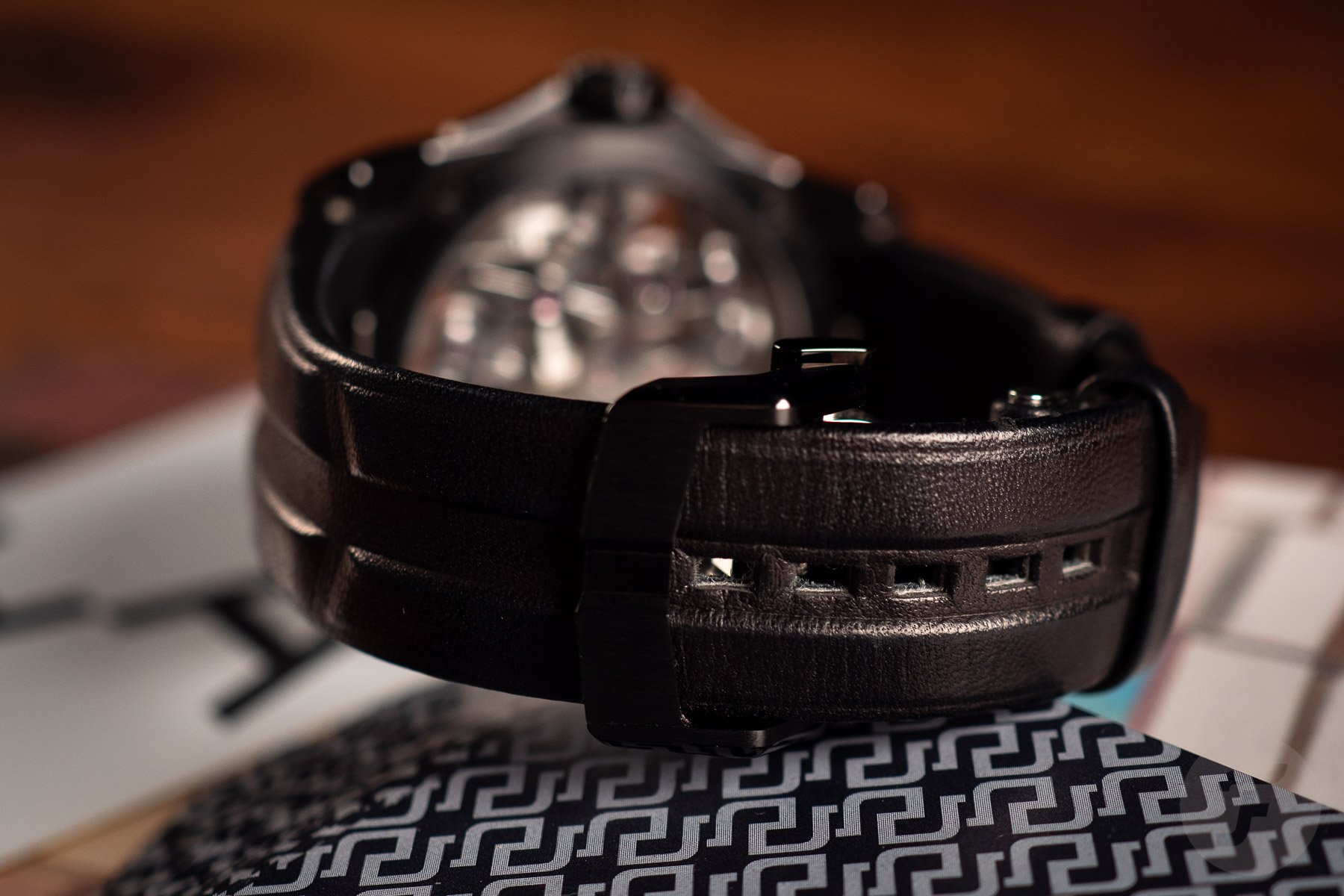 Because of its opulence, the Excalibur MB Black Ceramic serves its extravagant target audience with a hedonist streak. But since the watch is, at its core, an Haute Horlogerie creation, everyone from a traditionalist to a futurist who appreciates fine watchmaking will find beauty inside. When the calm and collected master watchmaker Roger Dubuis (1938-2017) started his own brand together with flamboyant marketing man Carlos Diaz — who, actually, became the major shareholder — back in 1995, the first watches that came out were a mix of traditional Genevan watchmaking and contemporary flair, albeit ones that showed a bit more restraint than the current models. The round Hommage models were spectacular in a comforting way. But especially the Sympathie watches with cushion-shaped cases and sharpened corners, made an immediate and strong impact. Not just on me, but also on the collectors’ community. 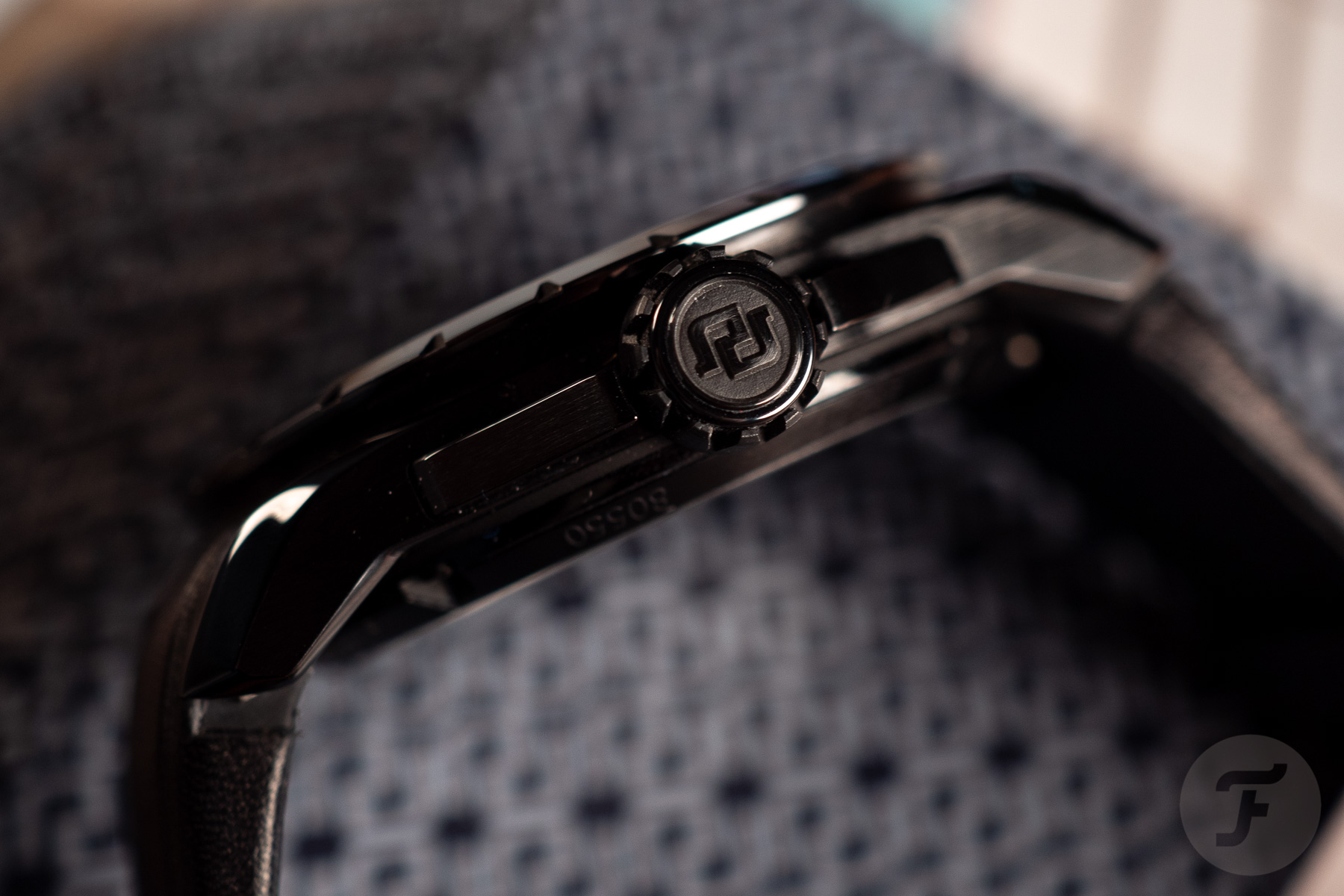 The company’s namesake co-founder Roger Dubuis retired in 2003, and in 2008, Carlos Diaz sold his 60% stake in Roger Dubuis to Richemont for an estimated sum of CHF 150 million. You could argue that the Excalibur of today has looks that are connected to the larger-than-life character Diaz, but its inner workings are much like Dubuis. After all, every Roger Dubuis watch carries the Poinçon de Genève, a hallmark that holds great value in the world of horology. 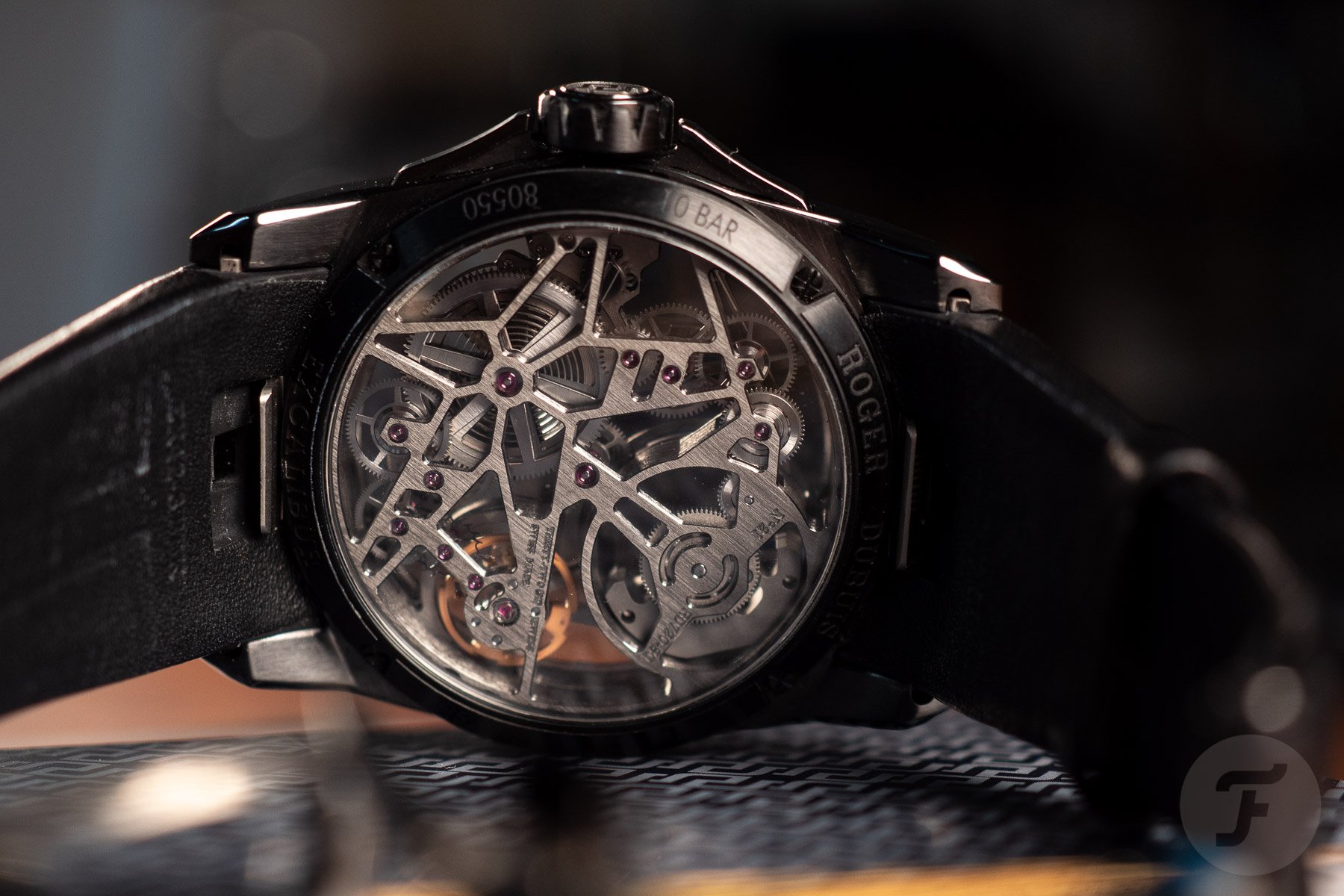 Since the Excalibur MB Black Ceramic carries the Poinçon de Genève, it doesn’t come as a surprise that the watch is entirely hand-finished. And when looking at the dial with its engraved minute track and carefully crafted gray hour indexes, it shows. And the almost-absent dial is just the beginning. The sharp, skeletonized, twin-blade hands are powerful from a distance and immaculately finished when observed up close. And we’re still not even really inside the watch. Once you get into the 4Hz caliber RD720SQ, things get even crazier. 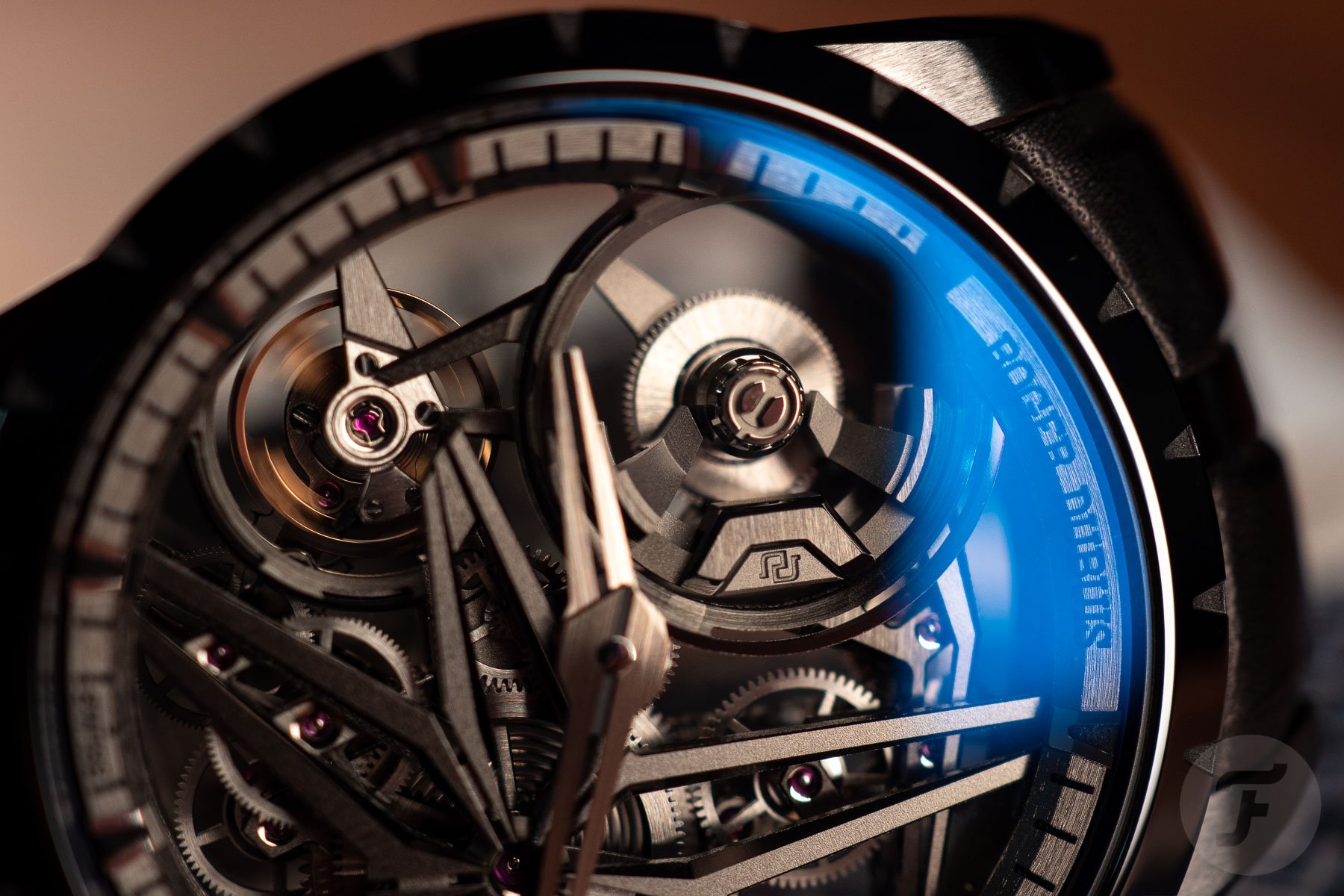 Just have a look at the micro-rotor between 10 and 11 o’clock. The micro-rotor is, in itself, a symbol of traditional refinement. The one Roger Dubuis uses in this Excalibur is an angular-shaped 2.0 version. It’s a quick-spinning object that reminds me of an alien spacecraft in a very tiny space race. The movement has the power to make the watch run for 72 hours. Maybe not unearthly impressive, but still very respectable. 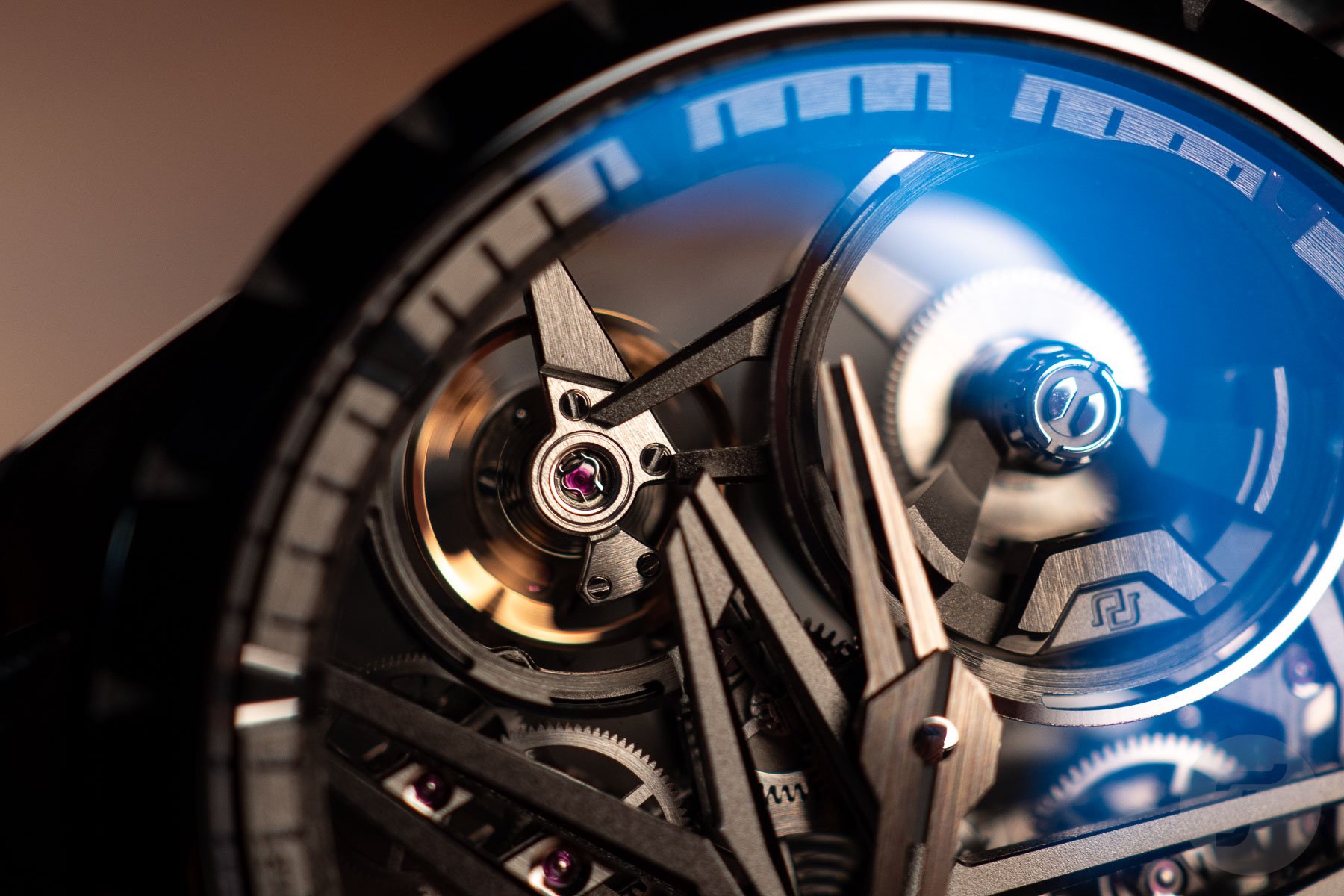 When you think of modern-day Roger Dubuis creations, you might think of a tourbillon or two. Does the absence of one or two tourbillons make this Excalibur less interesting to behold? I don’t think so. The 42mm Excalibur with its MB (Mono Balancier — single balance wheel) and the edgy micro-rotor offer enough dynamic visual energy to keep things interesting. Just as much, I think, as the 45mm Excalibur with a DT (Double Tourbillon) and a €305,000 price tag. You can buy four MBs for one DT. I added this vital piece of information for novice hedonists who still take value for money into consideration. 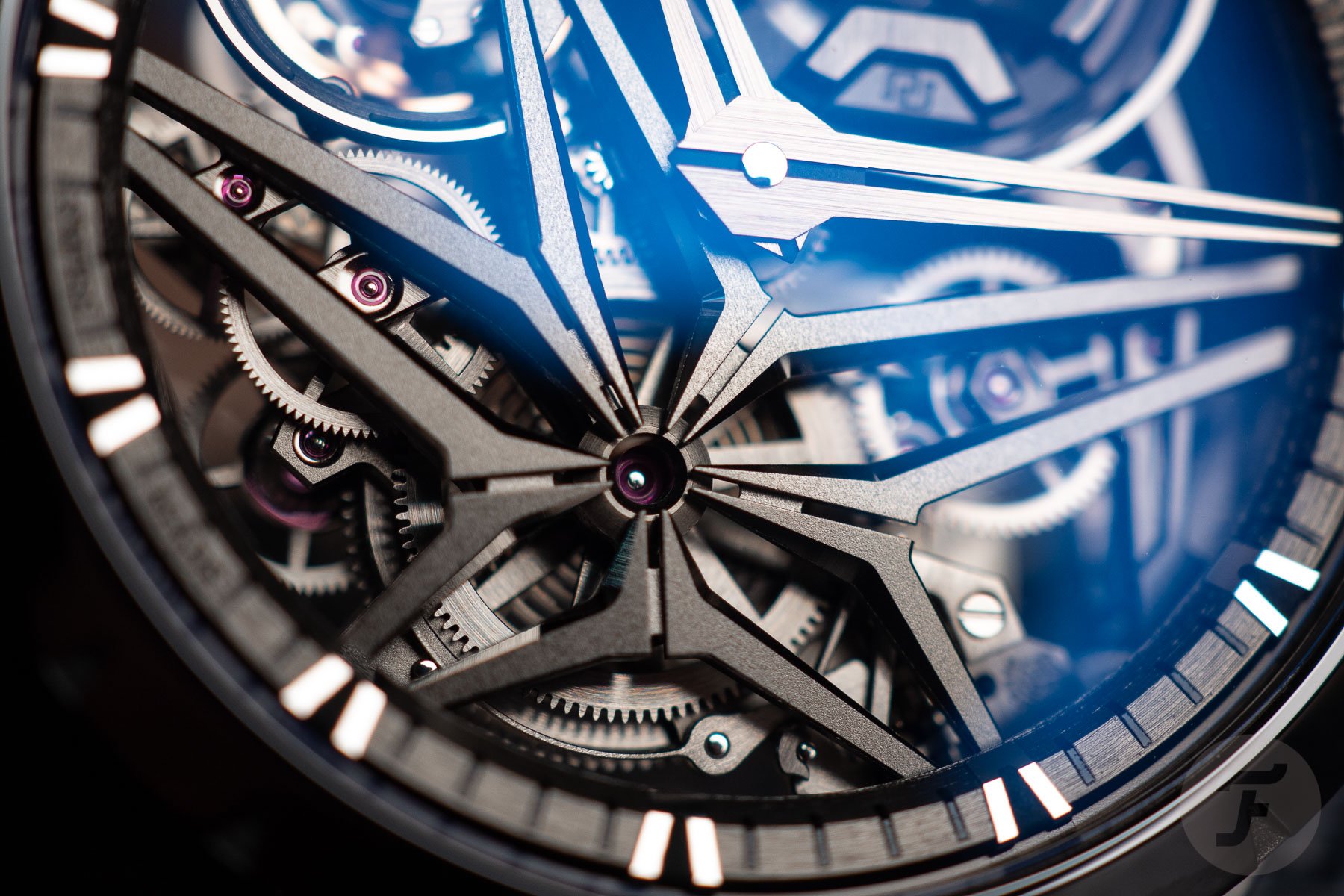 The star-shaped, open-worked, Mono Balancier movement is, of course, a veritable eye-catcher. The tight and robust geometrical shapes tell the tale of evolution. You see, in the old days, an existing movement would be painstakingly relieved of its “excess” material. 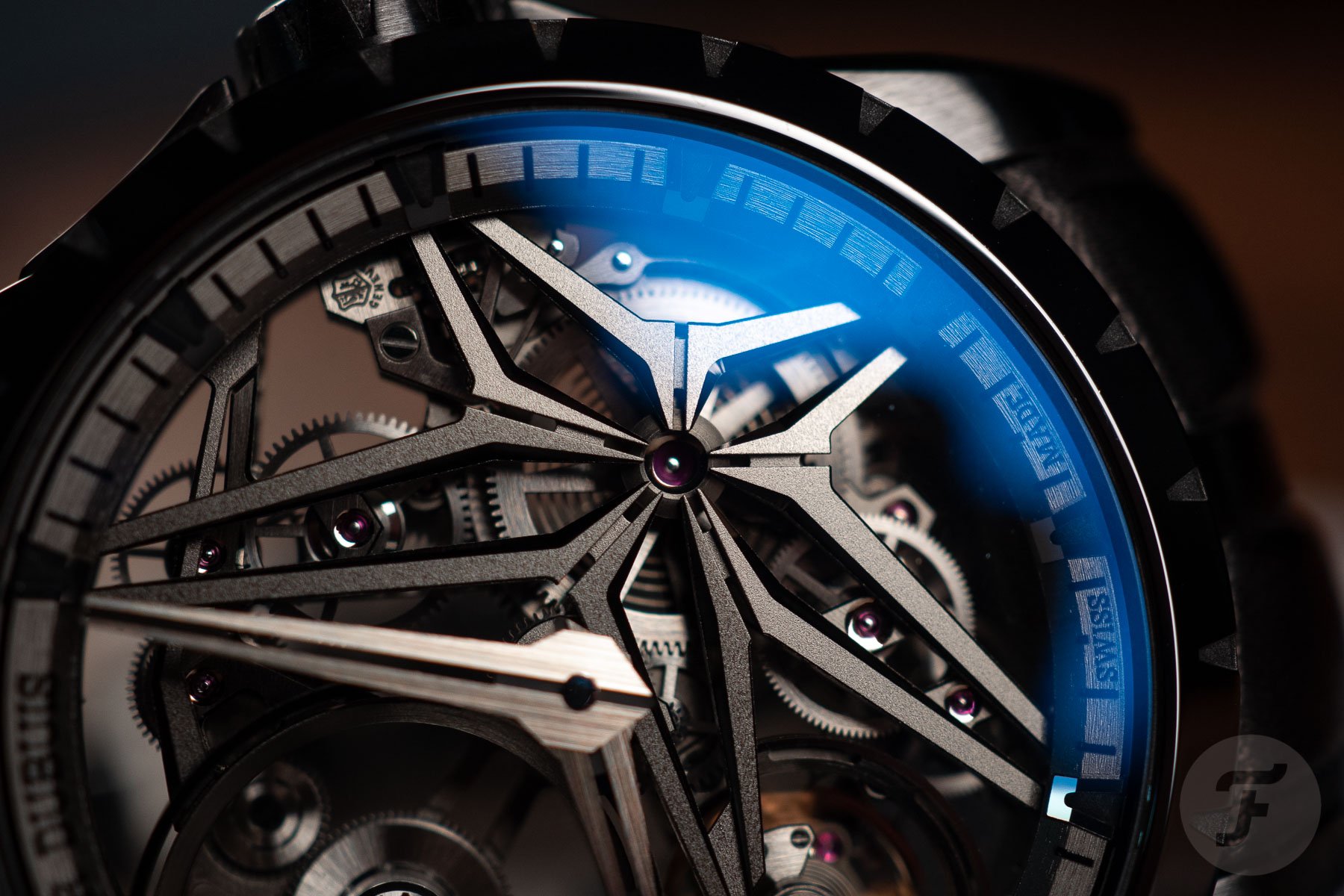 The result would be a delicate, random-looking movement. By contrast, the 178-part, 5.95mm-thick RD720SQ is an open-worked design from the start. It’s a complicated “form follows function and vice versa” situation that has become a unique and spectacular brand signature. And through a magnifying glass, the sand-blasted main plate and bridges, the beveled edges, and the polished details offer a science-fiction micro-spectacle. I could imagine that it looks like the inside of the Death Star during its final stage of construction.

Waiting to be discovered

Just as any far-more-common timepiece of this size, the exotic, exclusive, and slightly extravagant 42mm Roger Dubuis Excalibur MB Black Ceramic is easy to wear. And the watch’s moderate measurements do help accomplish that. So too does the soft, embossed black calf-leather strap with a triple-folding clasp in black DLC-treated titanium. But no matter how well it blends in from a feel perspective, from a visual perspective, the watch stands out. Not in the over-abundant way that a 45mm rose gold open-worked double-tourbillon Excalibur most eagerly presents itself. Instead, the Excalibur MB Black Ceramic allows you to spot it yourself. It sits on the wrist waiting to be discovered. But once it has caught your attention, it won’t let go. 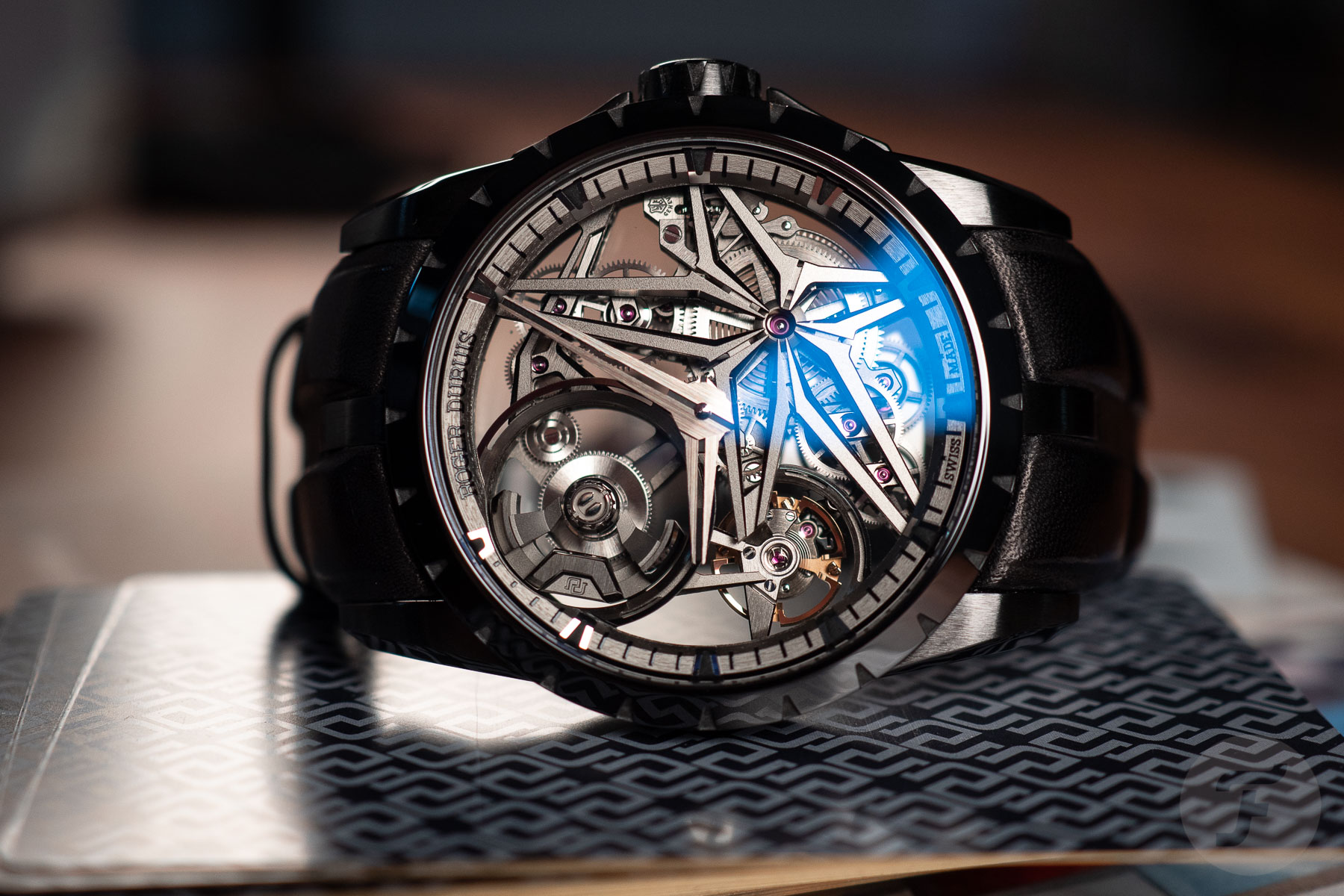 More than meets the eye

The close-up pictures are solid proof that the Roger Dubuis Excalibur MB Black Ceramic 42mm is much more than meets the eye. At first, the watch is a polarizing style statement. Because of its bold appearance, it scares off those who would actually appreciate and value the finer watchmaking elements that hide inside the case. Once you’ve looked inside the watch — not that hard to do when you’re dealing with an open-worked piece — a world of horological beauty opens up. I recommend looking behind the façade and examining the watch’s character and talents. The Excalibur is a Geneva Seal-worthy watch composition. And it’s made by very skillful artisans in the updated spirit of the brand’s founder and master watchmaker, Roger Dubuis. 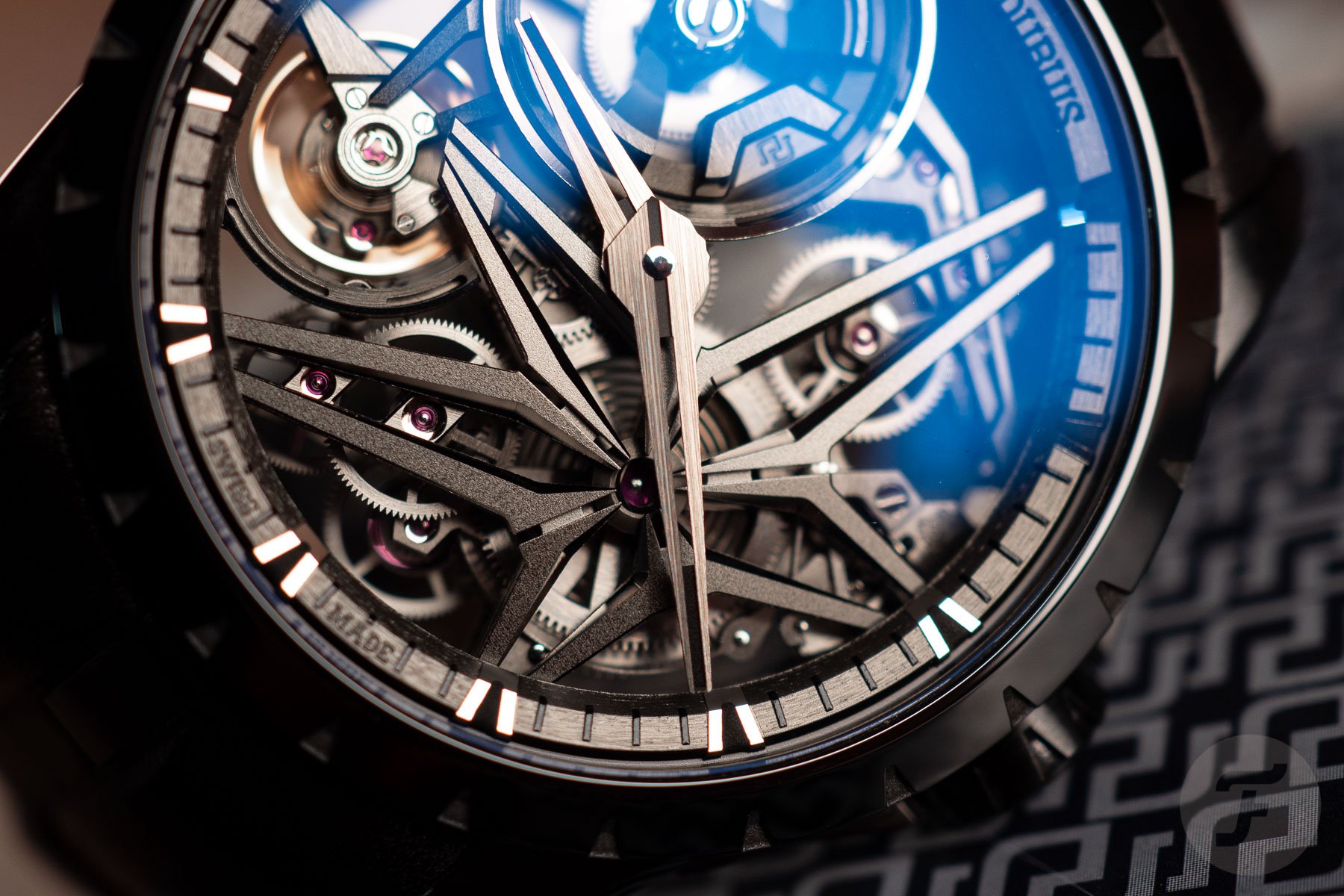 Just as Sophia Loren proved to be more than meets the eye and went from beauty queen to revered actress, the Excalibur MB Black Ceramic is not just a bold timepiece. The watch is a very well-balanced technical and aesthetical tour de force with a surprisingly subtle spirit.

If you want to know more about Roger Dubuis and the different Excalibur models, please visit the brand’s official website.