Who's ready for yet another re-edition of one of Seiko's legendary divers?
Daan de Groot
comments 32
Share

Well, I know I’m ready for this one! After re-editions of the 62MAS and the “Captain Willard”, Seiko now brings the less famous 6105-8000 back to life. It could be called the sleeker precurser of the ’70s Seiko Turtle. The new SPB313J1 (white), SPB315J1 (gilt), and SPB315J1 (black) all have a streamlined C-shaped case and, at 12.3mm thick, are Seiko’s thinnest Prospex watches to date. Is this the re-edition to get? Let’s find out!

The 1965 62MAS was Seiko’s first professional dive watch, and because of that, it became a legend. The 6105-8110 from 1970 appeared on the wrist of Captain Willard in Apocolypse Now, which also garnered that model incredible fame. In recent years, Seiko has released a lot of re-editions of both these watches. I’ve owned the SPB143J1, one of the more affordable re-editions of the 62MAS, but the brand has also released higher-end ones like the SLA017J1. The exact same thing is true for the Captain Willard. I’ve thought about getting the SPB151J1 because of its smaller dimensions, but the higher-end SLA033J1 might actually be the better-looking one. As a follow-up to these re-editions, Seiko now introduces the SPB313 (white), 315 (black/gilt), and 317 (black/silver). These watches take inspiration from the lesser-known 6105-8000, the 1968 successor to the 62MAS. 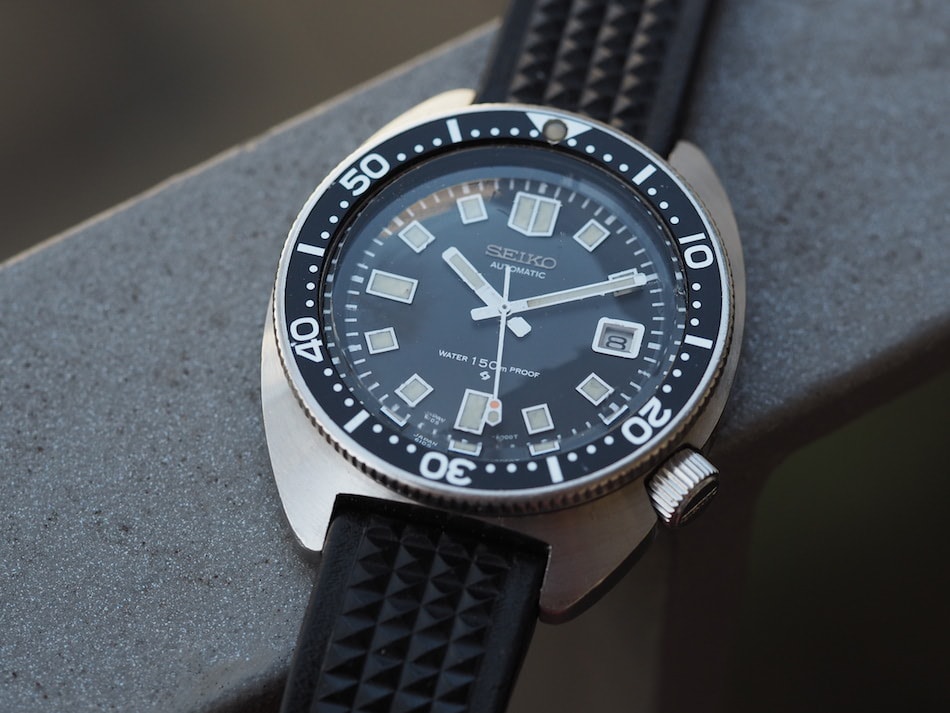 Sorry for all those reference numbers in the intro, but I think it’s good to put this release into context. This is especially because all three of the original Seiko divers (and their re-editions) have such different case shapes. I’ll make a more direct comparison below, but let’s get into the newest members of the family first. There’s the SPB313J1, which has a white dial with black hands and details. Then there’s the SPB315J1, which has a black dial with gilt hands and accents. And finally, there’s the SPB317J1 — what I’d call the “original version” — with a black dial, steel hands, and silver accents. That last one comes on a silicone strap, while the first two come on a new five-link bracelet. This one is notably slimmer than the three-link bracelet found on the previous SPB models. The clasp is also less bulky, but it still includes a diver’s extension. 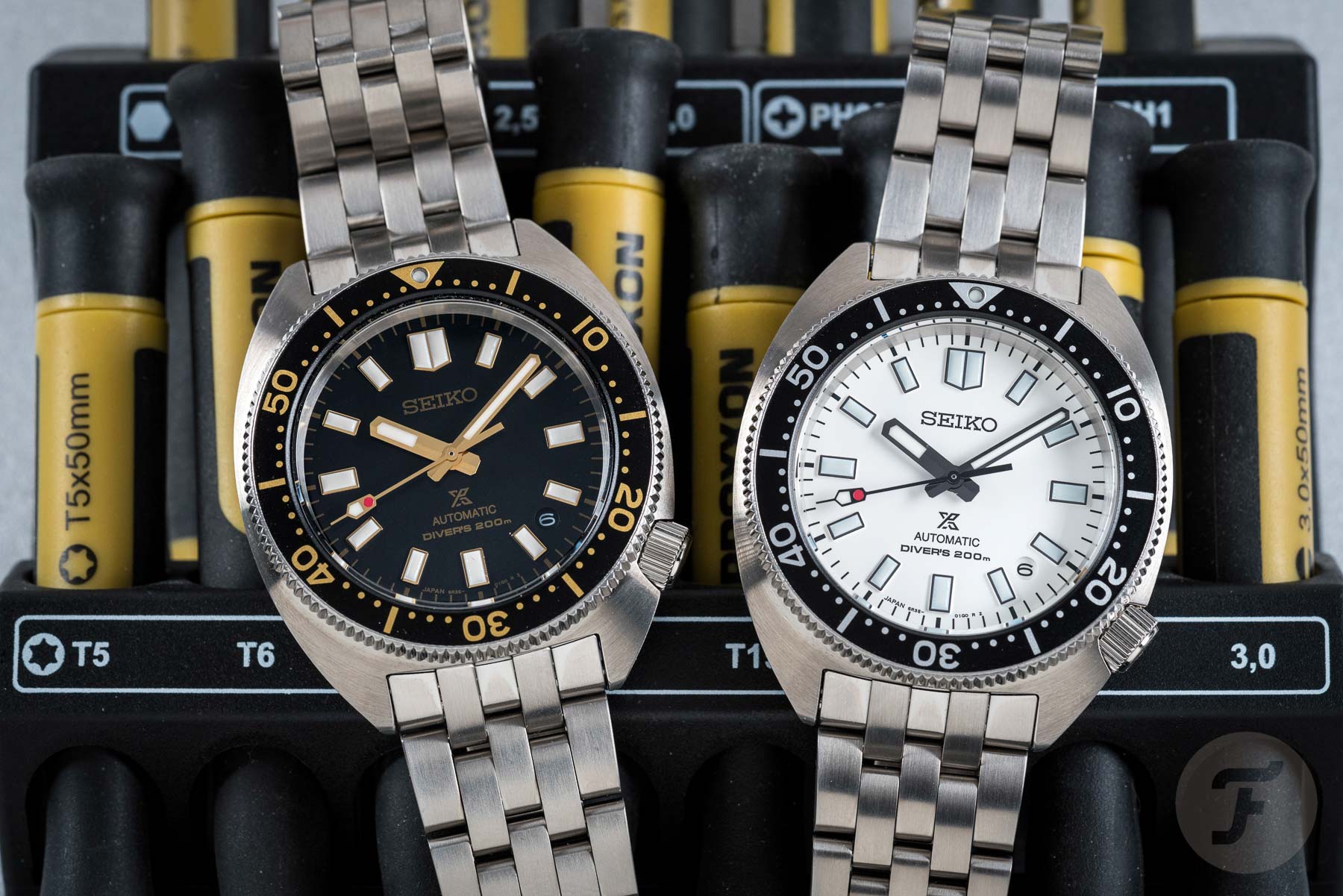 The fully brushed C-shaped case measures 41mm wide, but because the bezel is slightly smaller than that, the watch actually wears more like a 39-40mm piece. That’s also because of the fairly short lug-to-lug measurement of just under 47mm and the acceptable height of 12.3mm. Interestingly, that last measurement makes these new models Seiko’s thinnest Prospex dive watches to date. The design is very close to that of the 1968 original, but because the lugs are a little over 1mm shorter, they also look a bit pointier. With measurements like these, the watch wraps itself very comfortably around my 17cm wrist. The screw-down crown at 4 o’clock is very well protected by the case and only sticks out a little bit. Seiko used to call this an “anti-snag” crown on the 6105-8000, and I can see why. It’s almost impossible to get this one caught on anything.

The dial and hands on the new SPBs are very similar to the ones we’re used to seeing on the 62MAS and Captain Willard re-editions. We have rectangular hour-markers filled with a lot of lume, the Seiko logo at 12 o’clock, and the (much-disputed) Prospex logo with “Automatic Diver’s 200m” text at 6 o’clock. The faceted hour and minute hands have both been polished and brushed, which helps with visibility. And there’s also no way you’ll miss that traffic-light seconds hand with its characteristic red dot. What is different is the date placement at four-thirty. The SPB143 (62MAS) and SPB151 (Captain Willard) both have a date at three, but at first, there was no accompanying lume pip. On later updates, Seiko had to place one next to the date to be compliant with updated ISO 6425 standards, which require a lume pip on the dial every five minutes. 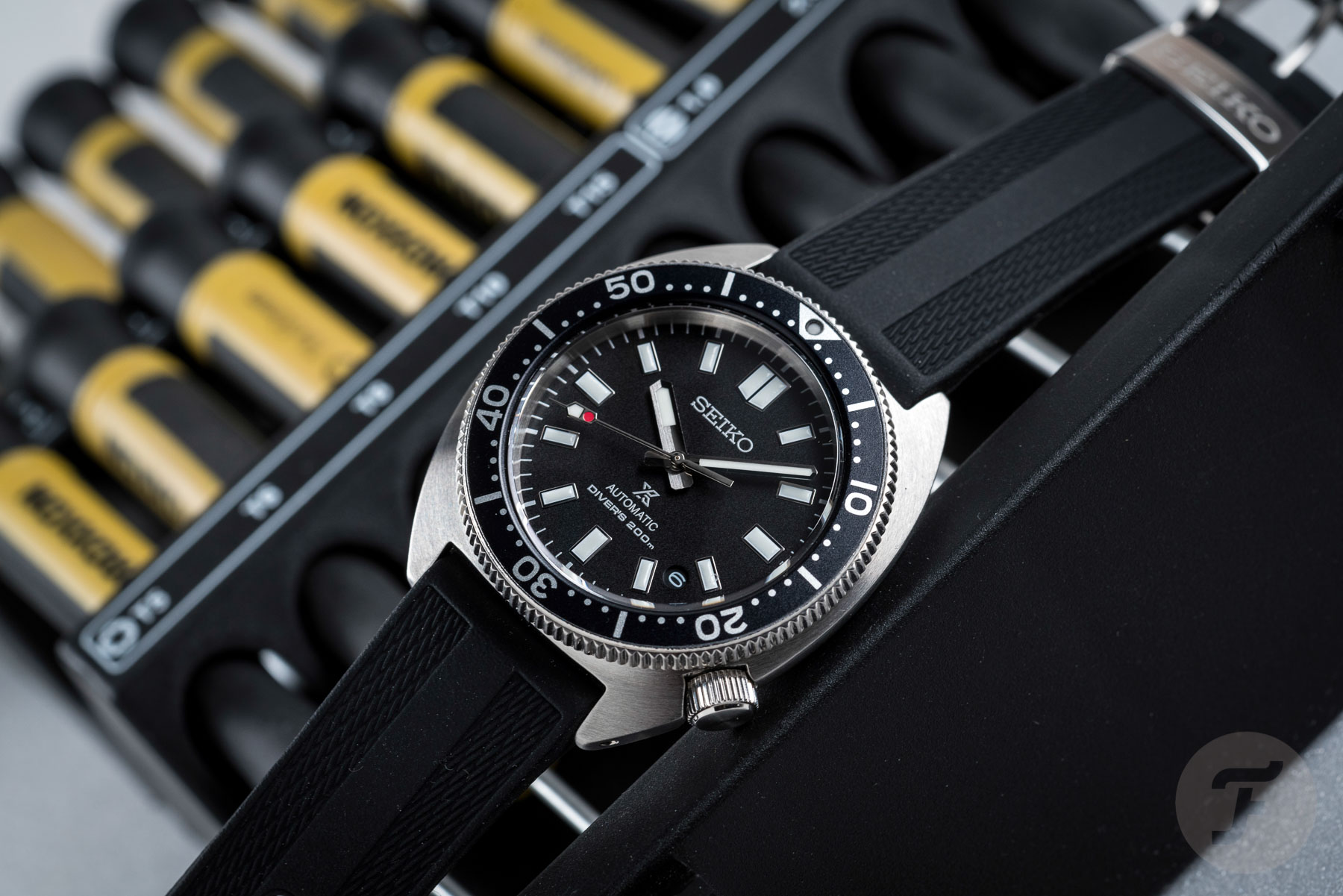 It didn’t look that good, though, because it was a clear afterthought. The marker was placed on top of the minute track, unlike the other lumed markers. On these newest SPBs, Seiko chose to place a full-size lumed marker at 3 o’clock and move the date to four-thirty. So as not to bother you too much, Seiko tried to make it as small as possible, letting it blend in with the colors on the dial. I mean, I’d rather have a nicely marked date at 3 o’clock like on the original 6105-8000. But, if they really need the lume at that position, I think this is a nice solution. It’s still a dial with a lot of character, and while wearing the watch, I didn’t even notice the date all that often. This is just like on my Blancpain Bathyscaphe, which has a similar layout with the date at four-thirty.

A familiar bezel and movement

The dial is covered by a domed sapphire crystal with an AR coating on the inside. It hardly protrudes above the bezel, which has an aluminum insert similar to the one on the SPB151, for example. I would like to see the brushed steel bezel insert from the SPB143, but then again, that bezel is quite wide. I do prefer the slimmer bezel overall because it makes the watch look a little more agile. The bezel action on these new Seiko divers is very similar to the earlier re-editions; it is still very clicky and, at the same time, very smooth. What’s also very similar to the previous re-editions is the 6R35 movement. 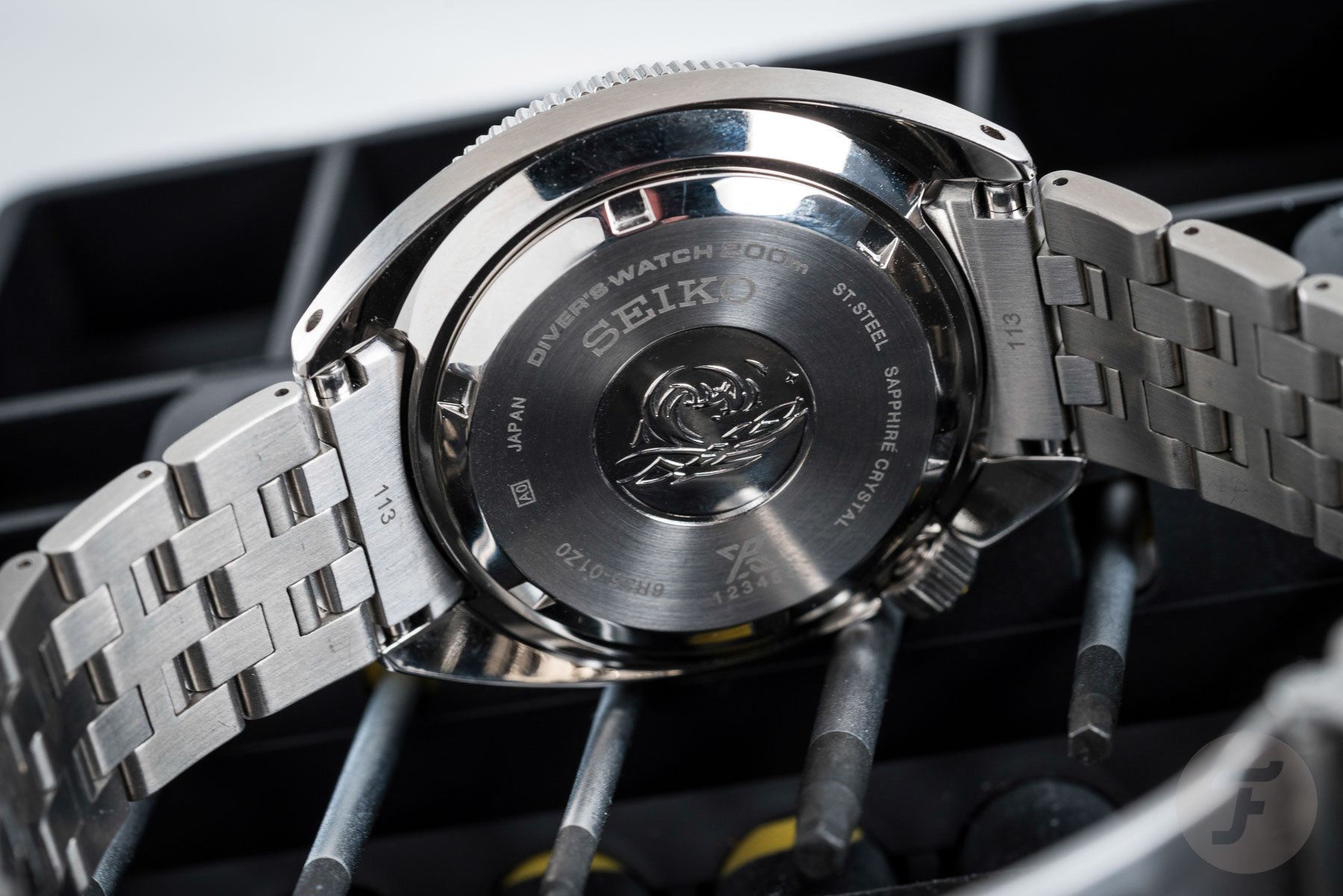 Seiko’s workhorse movement runs at a beat rate of 3Hz (21,600vph) and has a comfortable power reserve of 70 hours. It’s not the most accurate movement at +25/-15 seconds a day, but users often claim tighter tolerances. In addition, according to ISO standard, the movement is also anti-magnetic to 4,800 A/m (60 gauss), which is a nice bonus with so many electronic devices around nowadays. And because of the combination of the screw-down crown and case back you can go as deep as 200 meters underwater. All in all, I think Seiko offers a very compelling package here. But how does that package compare to the other re-editions? 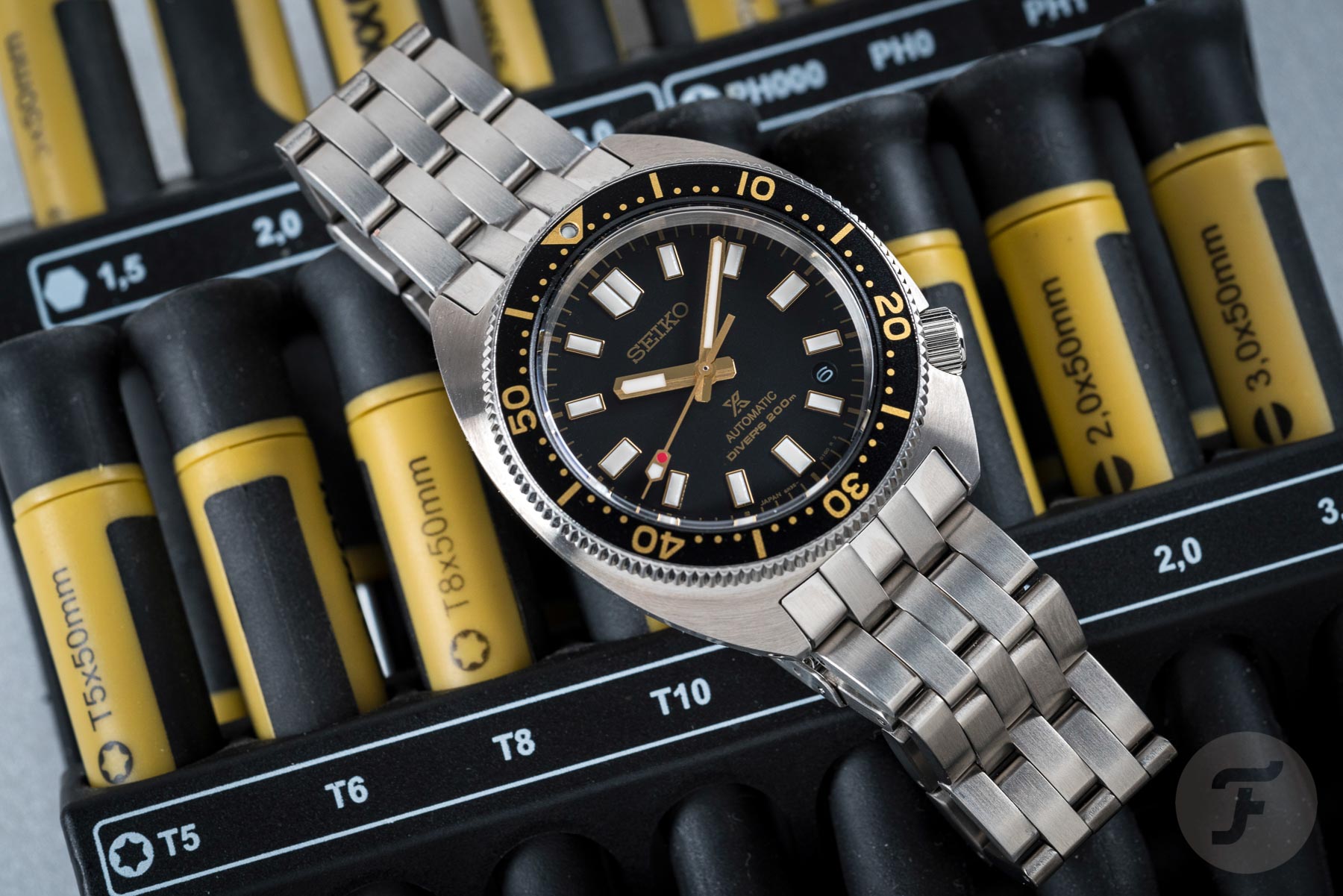 I’ll take the word “package” very literally here and just talk about how the designs compare with each other. After all, the internals are basically all the same. The SPB143, a 62MAS re-edition, has more of a classic skin-diver design. The SPB151, a Captain Willard re-edition, has the large asymmetric cushion case design with the crown at 4 o’clock. And let’s then pick today’s SPB317, the 6105-8000 re-edition, with its symmetric C-shape case and the crown at 4 o’clock. Of course, the one you like best very much depends on your own personal preferences. From my perspective, however, I think the all-new SPB317 is the best-wearing one of the three.

I owned the SPB143 for about a year, and it’s a great watch, but I couldn’t get used to its more bulky design. The thicker case (13.2mm) and the fact that the bezel is as wide as its case makes it wear very true to its 40.5mm size. I haven’t owned the SPB151, but the times I’ve tried one on, it just didn’t sit right on my wrist. I really like the way it looks, and it’s true that it wears smaller than its 42.5mm width. But for me, someone who generally enjoys watches below 40mm, it just didn’t feel right. It was a whole different story with the new SPB317. From the moment I put the watch on my wrist, it felt very much at home. 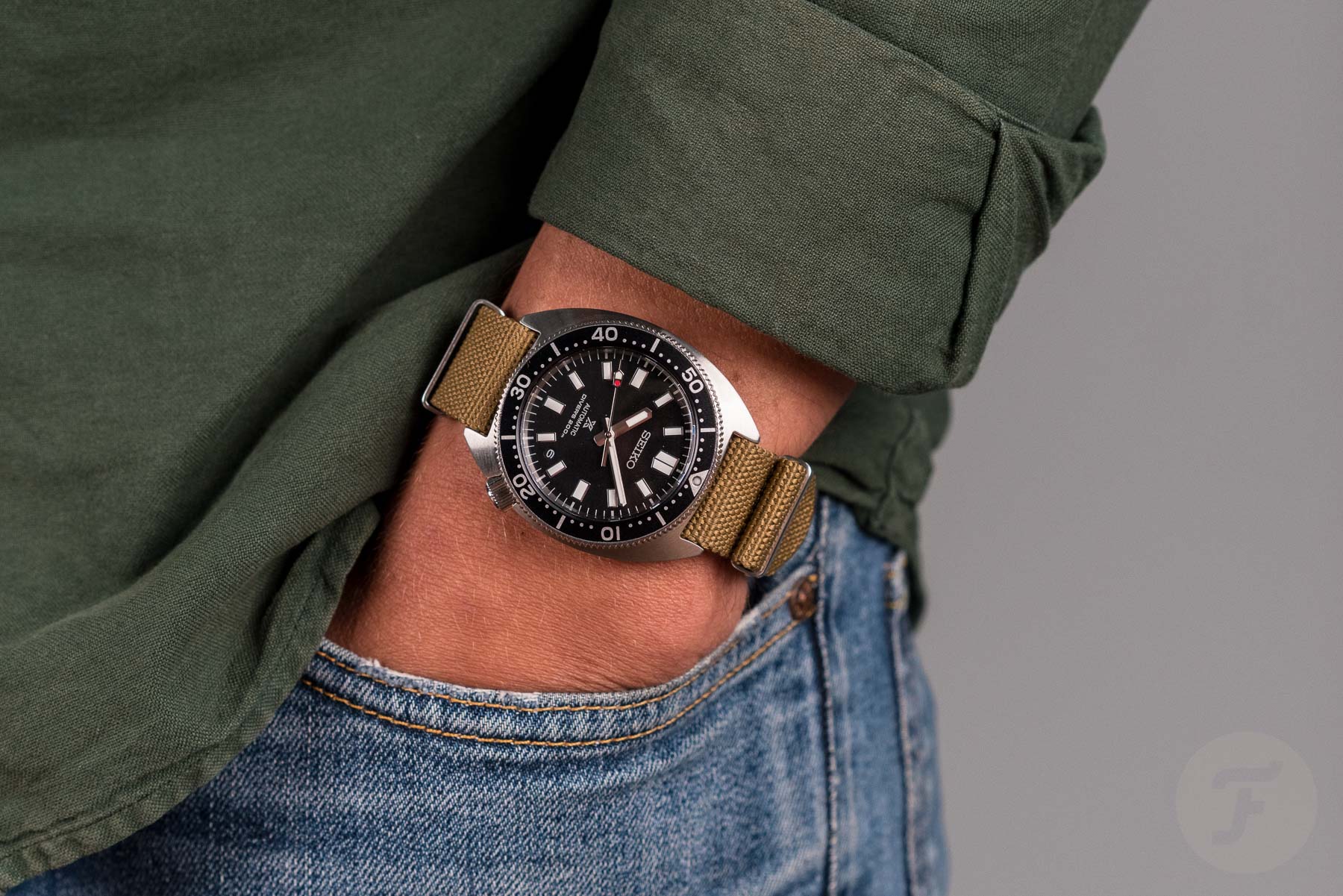 I’ve tried it on the Seiko strap, which wears very comfortably, but it is a bit thick. Nacho also lent me one of his NATOs, and it looked and wore great on that as well. I’m sure this is a watch that can handle a large variety of straps. Of course, you should try this one out yourself because everyone’s wrists and tastes are different. Nevertheless, I feel that Seiko has done a great job here. Since the 62MAS and Captain Willard are better known, it was a logical choice to focus on those first. But I’m very happy that Seiko has also revived this more unfamiliar 6105-8000. I don’t know if there will also be a higher-end “SLA” version of it later on as there was for the other two, but I’m quite certain I’ll add the SPB317J1 to my collection regardless.

Its streamlined C-shaped case in combination with the short lug-to-lug and reduced thickness makes the watch wear like a dream. Add to that the characteristic Seiko dial and the possibility of wearing it with a large variety of straps, and you have yourself a perfect everyday diver.

Both the SPB313J1 and SPB315J1 come on a stainless steel bracelet and cost €1,150. The SPB317J1 comes on a silicone strap and therefore costs a bit less at €950. All three models will become available in the coming month. Make sure to read all about this new release on Seiko’s website.

But what do you think of Seiko’s new re-edition? Would it also be your pick between the three styles, or would you choose the 62MAS or Captain Willard? Let us know in the comments!

Hot Topics
Laventure Automobile Chronograph With A Proprietary Movement — Marking A Huge Leap Forward For One Of The Industry’s Most Promising Brands
155 comments
We Talk To Swatch Group CEO Nick Hayek About The MoonSwatch
79 comments
Fratello Exclusive: An Inside Look At The MoonSwatch Production Facilities
75 comments
Selling Your Watch To A Dealer Or Trading It In — Tips From A Former Watch Dealer
49 comments
Summer Splash — Round 2 : Jorg’s Tudor Pelagos FXD Vs. Lex’s Hublot Big Bang Integral Ceramic Sky Blue
48 comments
Popular
10 Tips For Better Watch Photography
Bert Buijsrogge
11
Two Patek Philippe Nautilus Watches: 3700/1A Versus 5711/1A
Robert-Jan Broer
15
You Asked Us: Tissot Powermatic 80 Seastar 1000 or Longines HydroConquest
Robert-Jan Broer
17