On the first Sunday of October, I visited a local watch fair with my colleague Sofia Severino. There, we found hundreds of people shuffling past the tables with displays showcasing thousands of watches. Funnily enough, I almost bit the bullet on a Jaeger-LeCoultre Atmos clock in the first few meters from the entrance. However, in the second row with tables, there was a display with this funny-looking Jaeger-LeCoultre wristwatch on a watch pillow. A Jaeger-LeCoultre Master-Quartz, to be precise. I moved on to look at other watches but couldn’t get this one out of my head. 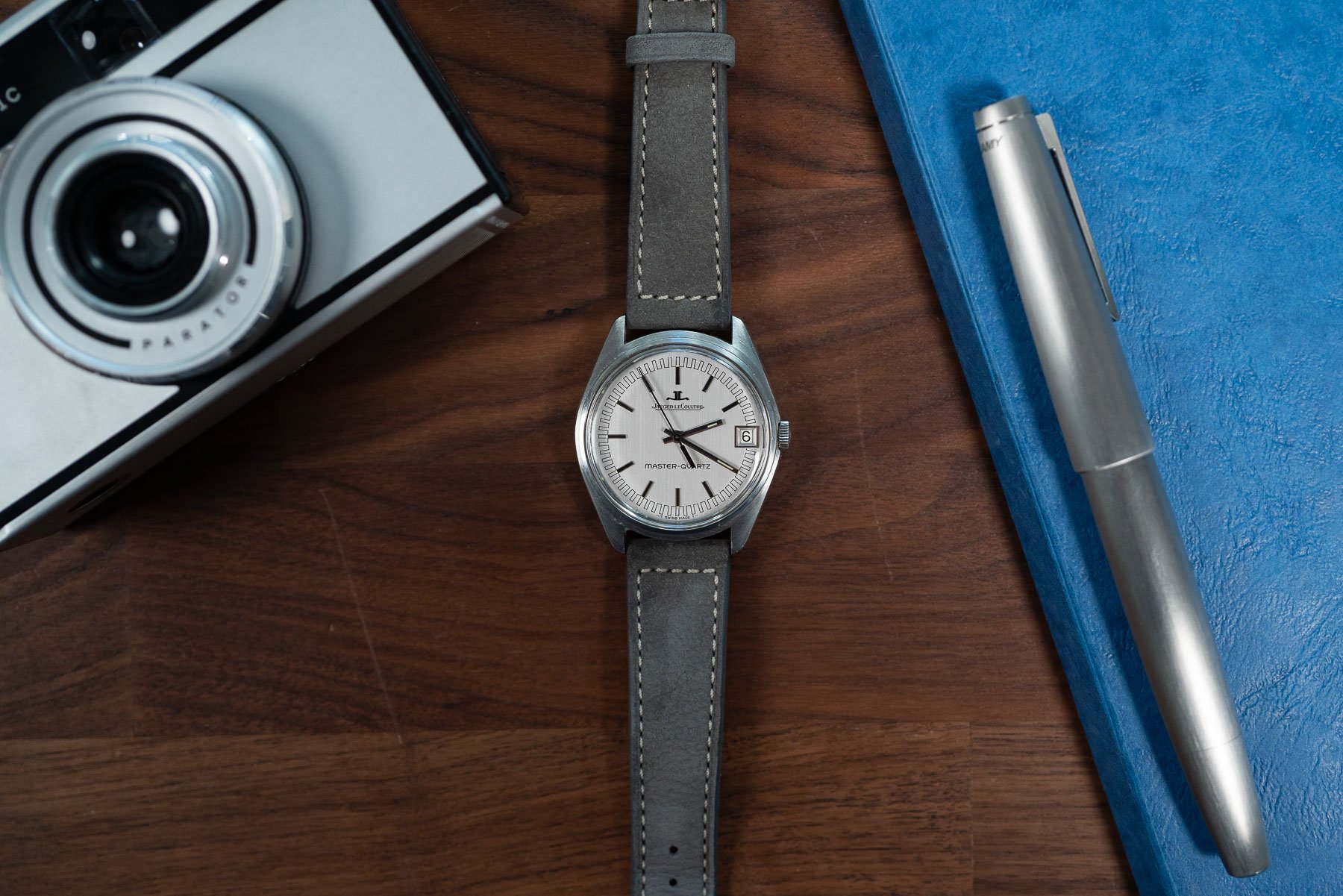 Buying a Jaeger-LeCoultre Master-Quartz at a watch fair

After a coffee (espresso!) break with my colleague Sofia, we looked at all the other tables with watches before I went back to the seller of the JLC. Luckily, the watch was still there, and I asked if he could open the case back. After a sigh and a frown (hey, I didn’t want to get home and find out there was some cheap plastic replacement quartz movement inside), he opened the case and showed me the movement. Inside was the caliber 352. It’s a quartz movement developed by Girard-Perregaux that looks more like a prototype or working concept than a serially produced quartz movement. More about quartz later on in this article. 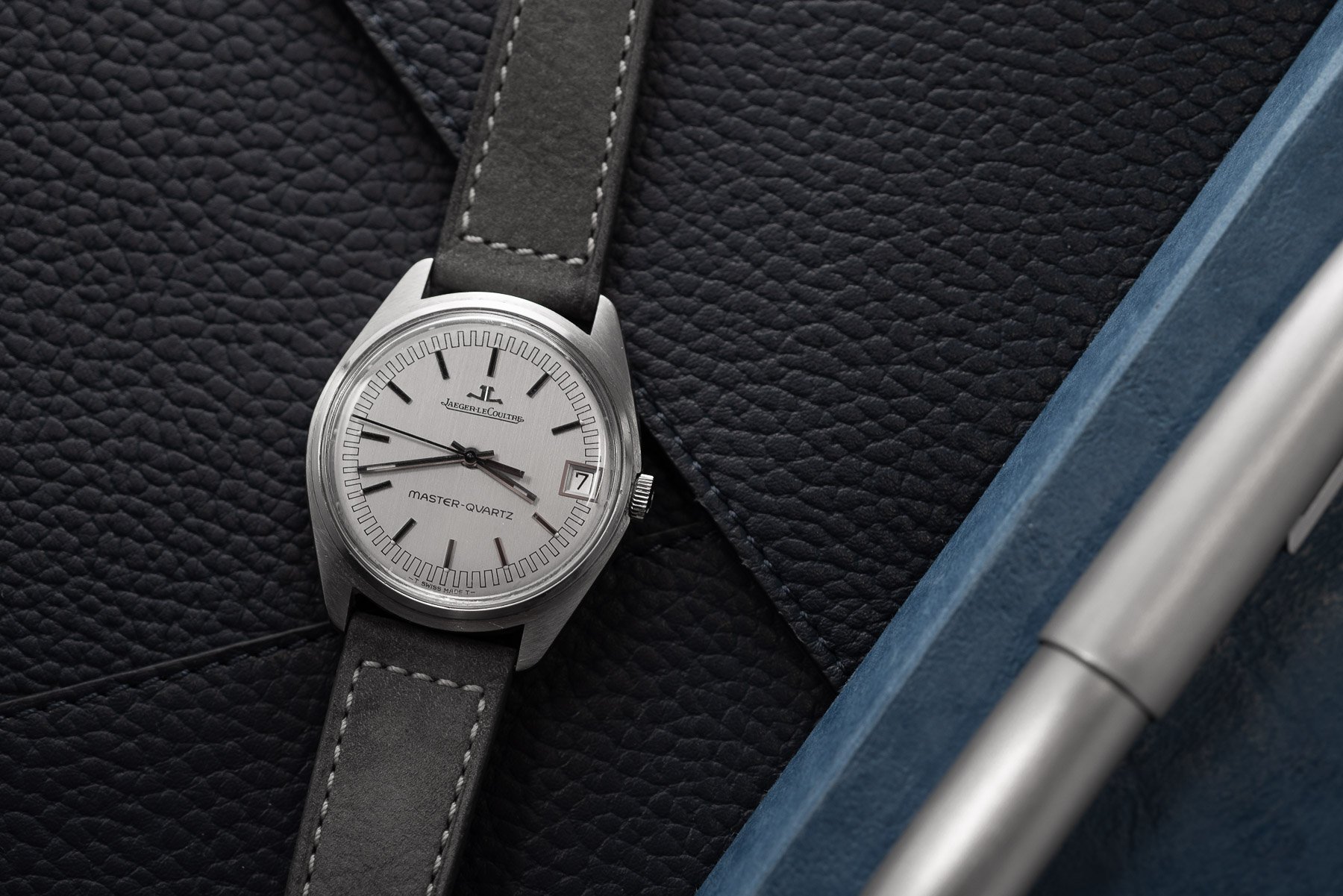 I paid the man what he asked (€800) as I appreciated him opening the case for me, and Sofia and I left the premises (but not before she bought some handsome straps for her Vacheron Constantin “Disco Volante”). 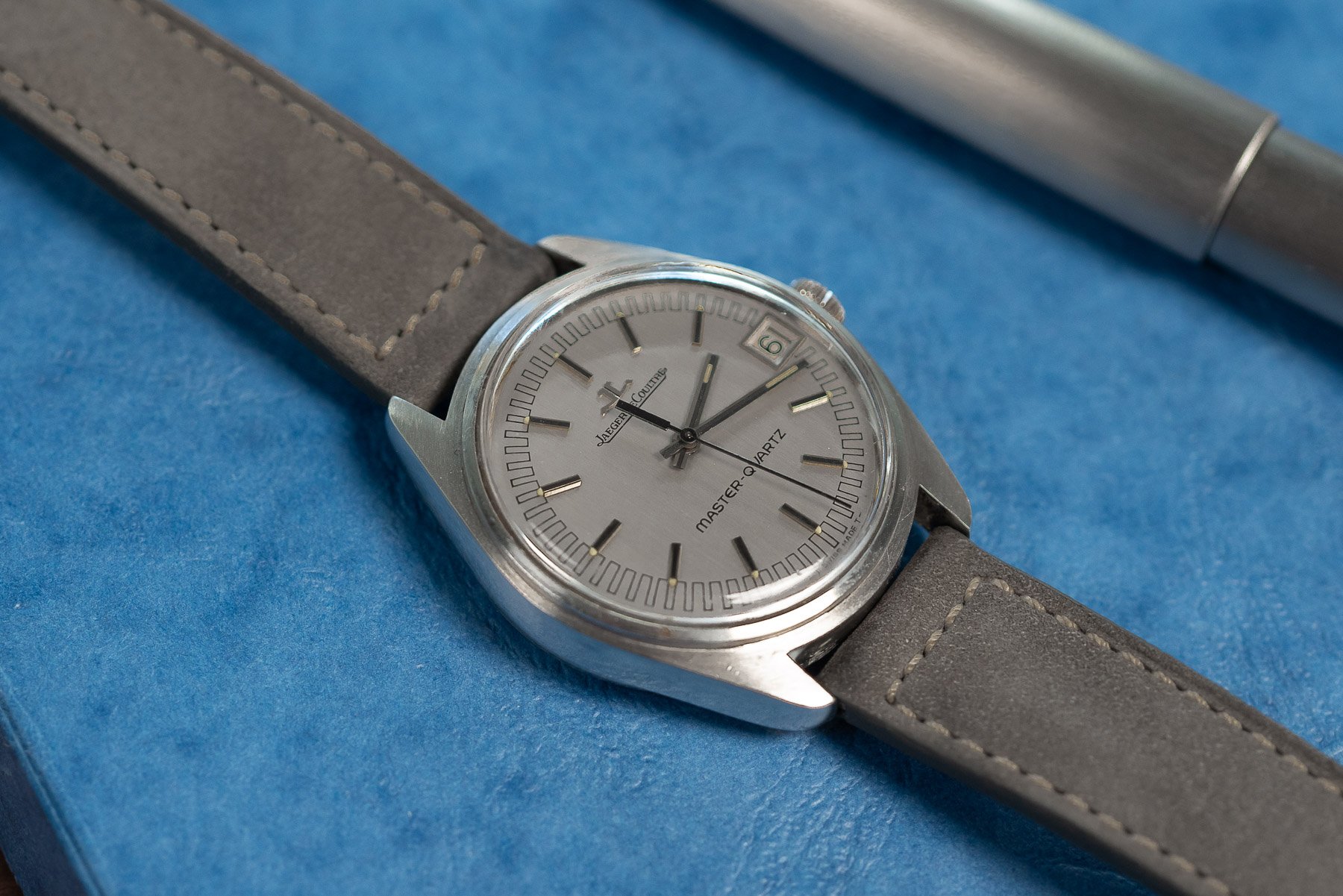 What drew my attention was the motif of the minute track on the dial. Then I noticed the large “Master-Quartz” wording in this typical 1970s typography. The dial has a vertically brushed finish, which I also like a lot. I took a gamble regarding the hands, as I couldn’t properly do a check at the watch fair. But it seems it is all original. I also have to admit it was due to this watch that I needed reading glasses. I noticed I couldn’t properly read the text on the dial, let alone identify the handset. 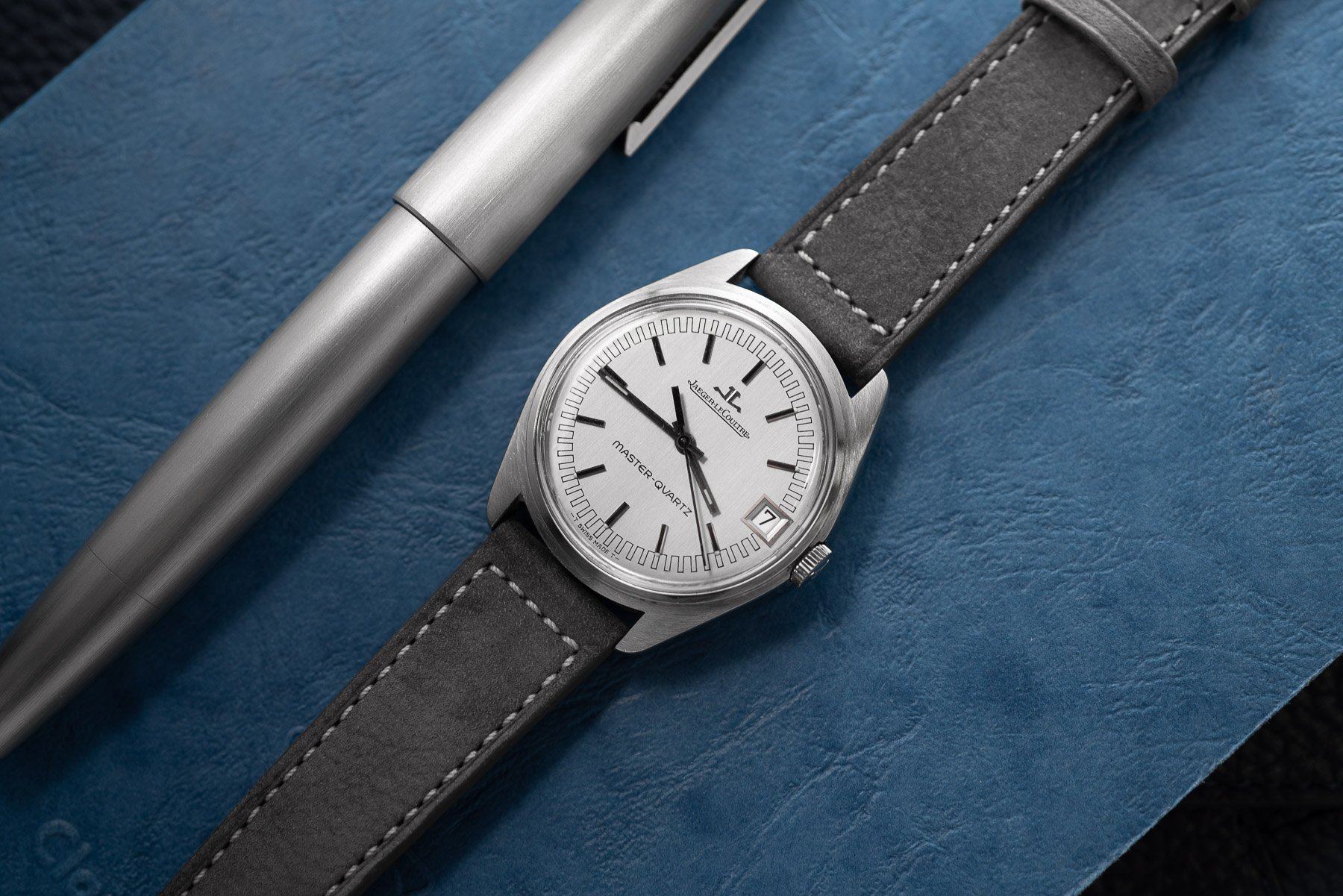 The case (reference 1326021) measures 38mm in diameter, making it a perfect companion for my 18.5cm wrist. As you can see in the picture, the case shape is very 1970s, but it still works today. Jaeger-LeCoultre also made Master-Quartz models with UFO-shaped cases, but the one I have here could be something used today as well. 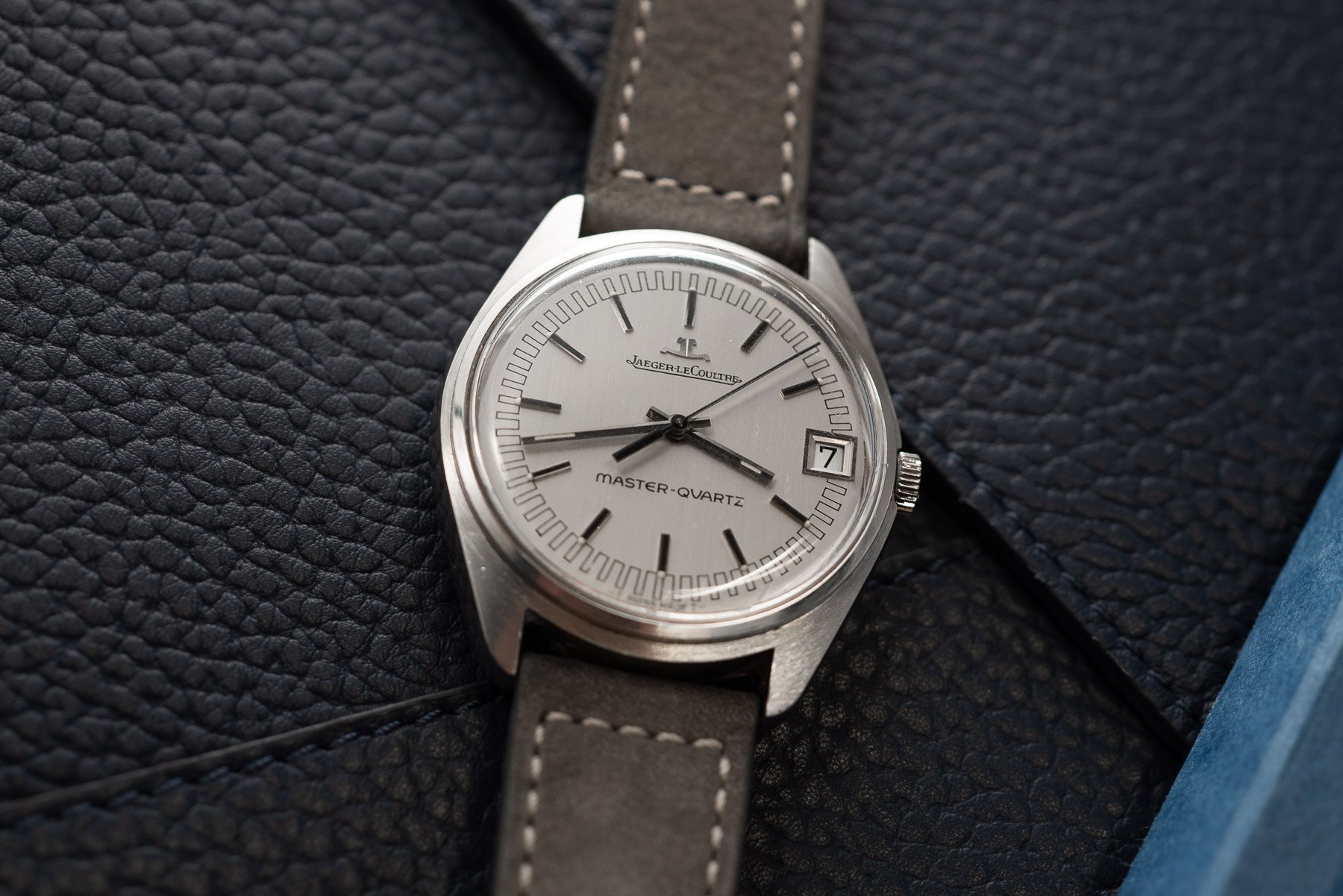 Somehow, the design of this Jaeger-LeCoultre Master-Quartz reminds me a little bit of the IWC Ingenieur and other tool watches from that era, perhaps due to the case. A few years ago, Jaeger-LeCoultre had this Geophysic watch — discontinued again in 2020 — that also comes to mind. 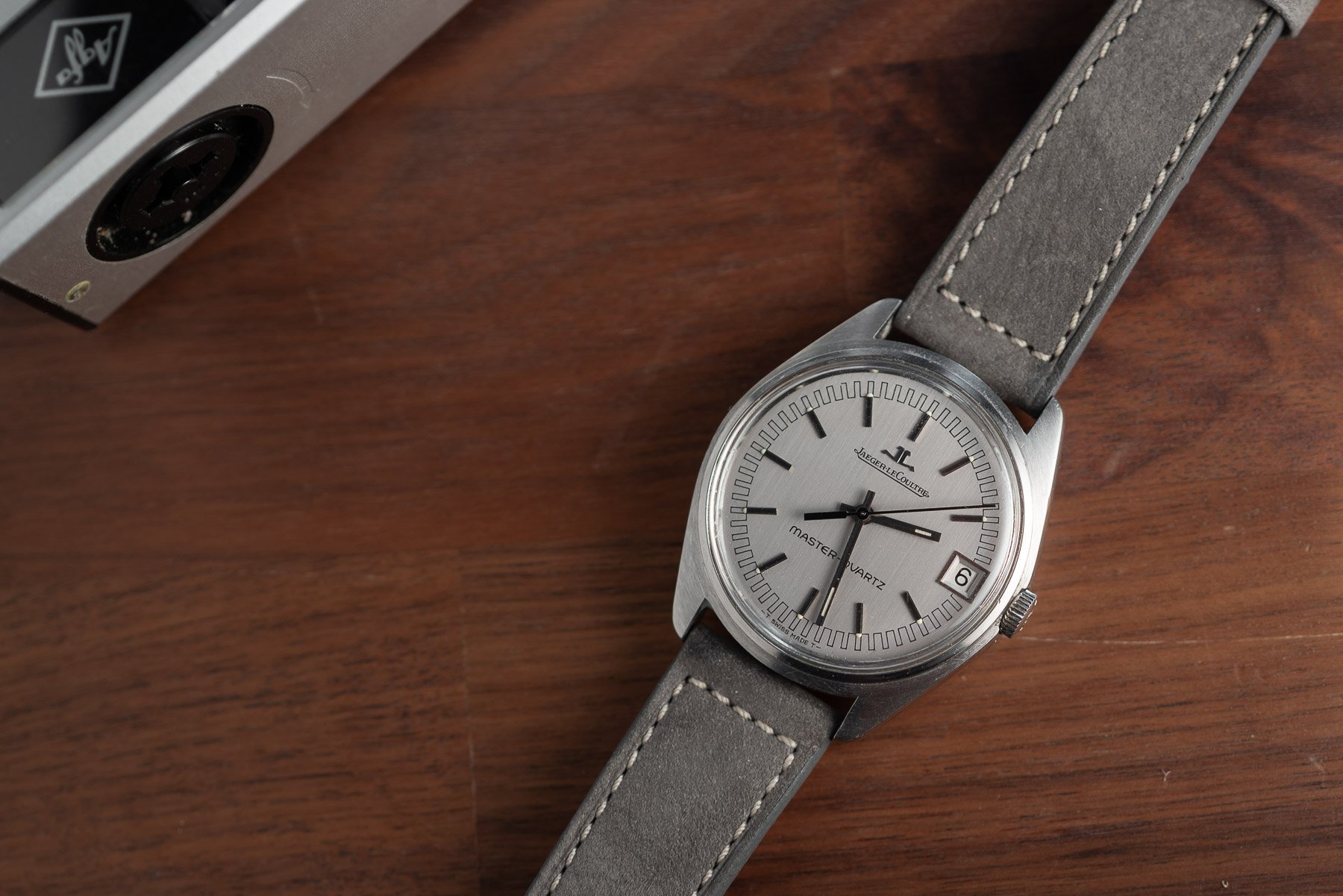 This Jaeger-LeCoultre Master-Quartz uses an early quartz movement developed by Girard-Perregaux. You have to know that the first quartz-powered wristwatch only came out in 1969. The first quartz clock debuted in 1927, so the technology was already there but way too big to fit in wristwatches. In those first decades, scientists and engineers often used quartz clocks in their labs. Seiko was at the forefront by developing a tabletop quartz clock in the early 1960s and using it during the 1964 Olympic Games. The first quartz watch was the Seiko Quartz Astron 35SQ, which made its debut on December 25th, 1969. 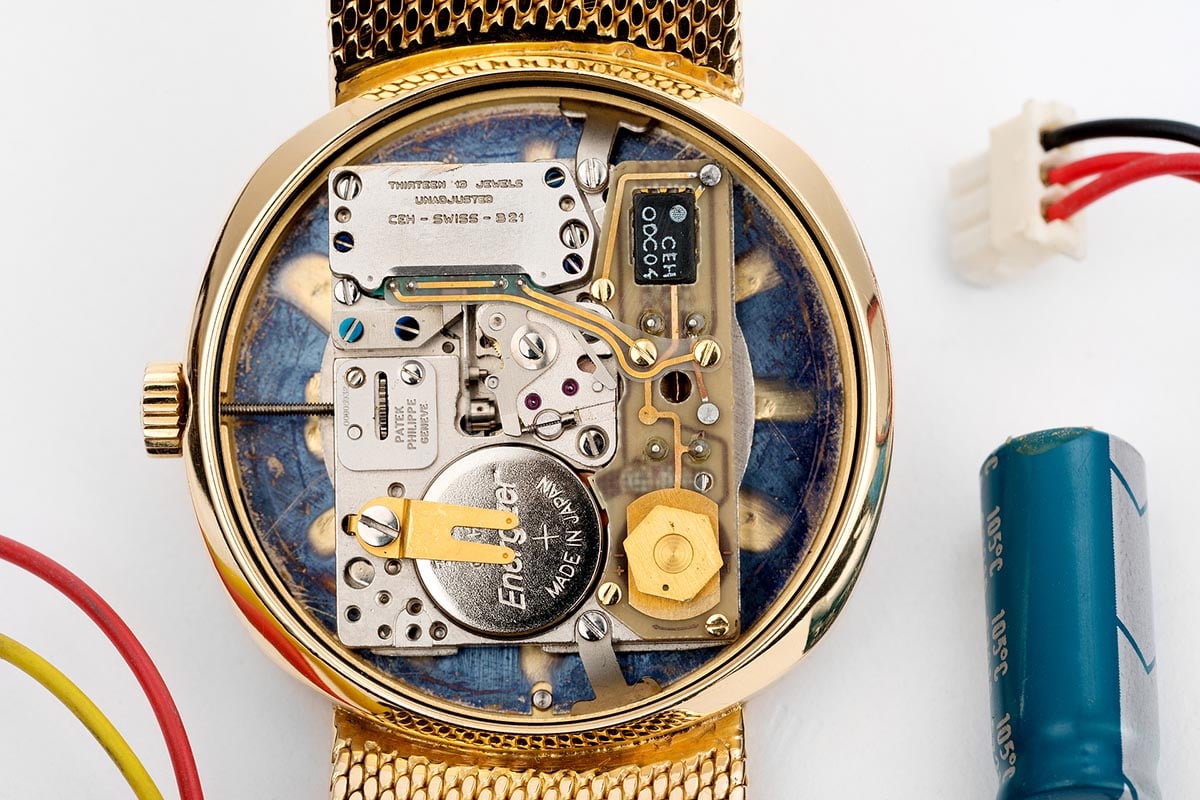 Meanwhile, the Swiss weren’t sitting still either. A consortium of Swiss watchmakers called CEH (Centre Electronique Horloger) developed a quartz movement for watches. On April 10th, 1970, the group’s Beta-21 movement debuted. After several prototypes, the Beta-21 was the first movement from the CEH that met the standards of production for use in wristwatches. These Beta-21 movements powered watches from Patek Philippe, IWC, Piaget, Omega, Rolex, Longines, and a few more. Only 6,000 of these movements were used, but watchmakers — including those who were part of the CEH — started to develop their quartz movements based on the Beta-21.

To cut a long story short, Girard-Perregaux developed the caliber 352 (as well as the 350, 353, and 354), with a frequency of 32,768Hz instead of Beta-21’s frequency of 8,192Hz. It meant higher precision and less power consumption, and Girard-Perregaux managed to keep the dimensions of the movement sane. This must have been why Jaeger-LeCoultre (LeCoultre was also a member of the CEH) started to use the caliber 352. 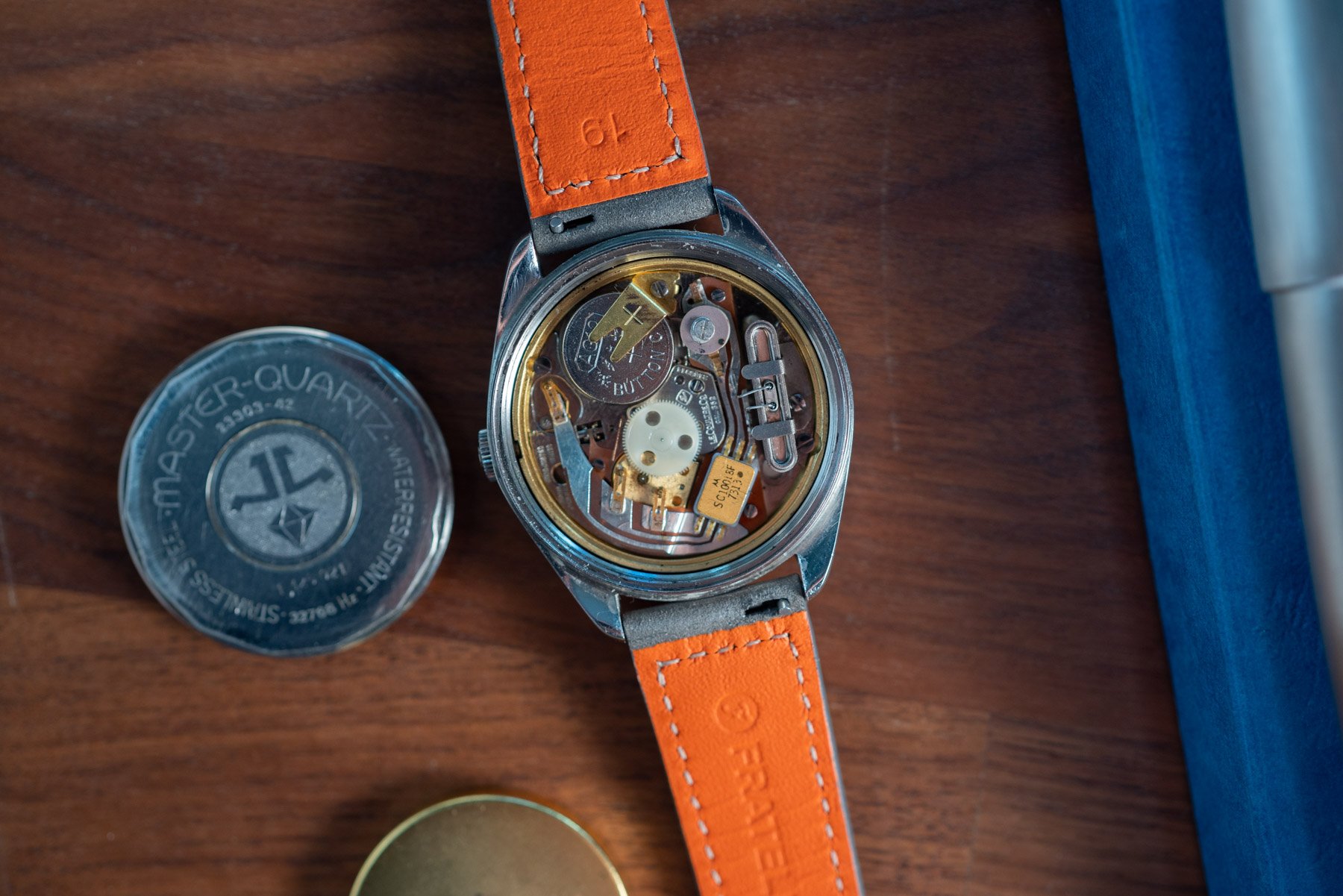 As you can see in the image above, caliber 352 doesn’t look much like today’s quartz movements. It still consumes quite a bit of space (the thickness of the case is approximately 13mm), but not as much as the Beta-21.

I am not an expert on quartz movements, but I think they have a time and place in watch collecting. Often, “quartz” is a bit of a dirty word among watch enthusiasts, but I don’t buy into that. Quartz movements have powered wristwatches for over 50 years, and the development of the technology has been long and interesting. It spans everything from those first Quartz Astron and Beta-21 watches to the advanced quartz movement we find today in watches from Grand Seiko, Breitling, Cartier, Longines, and Omega, for example. For a long time (1977–2003), the Oysterquartz models also held a prominent place in Rolex’s catalogs.

Quartz has a place in watchmaking history

I believe that there’s room for a good quartz watch in the catalog of a luxury watch brand as long as it brings something to the table. The Grand Seiko 9F movements come to mind. These calibers are very nicely finished (some watches even come with a sapphire case back) and have thermo-compensation, for example. The 352 quartz caliber in this Jaeger-LeCoultre watch is not as advanced as today’s quartz movements, but it marks a specific time in watchmaking history. 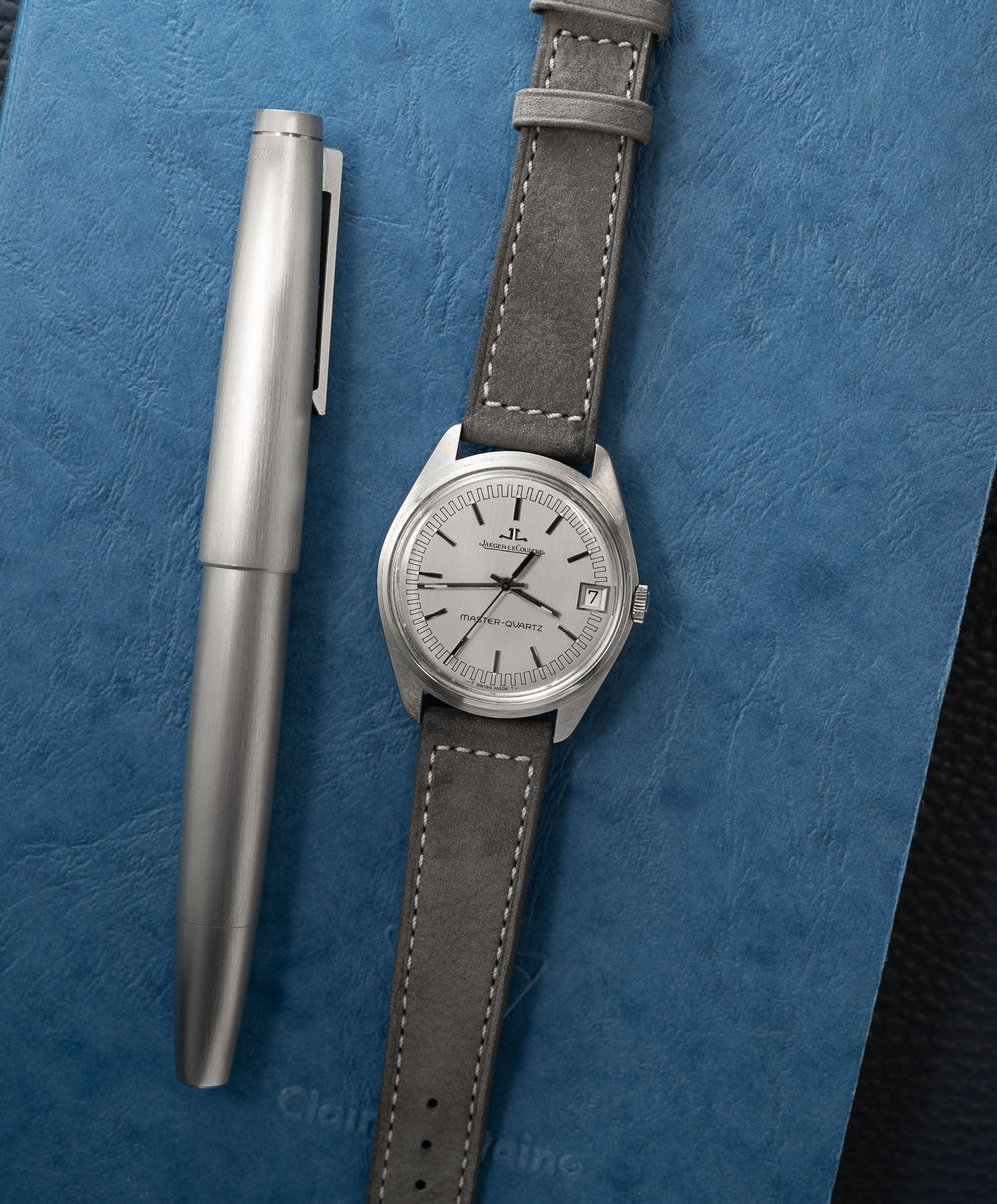 The Jaeger-LeCoultre Master-Quartz is just a fun watch Originally, my Jaeger-LeCoultre Master-Quartz ref. 23303-42 also came with a bracelet (similar to the one pictured above). Somehow, that disappeared over the years, and when I purchased it, it was on a simple black leather strap. I swapped it for a grey nubuck strap from the Fratello Signature collection (here) with a 19mm width. This is a typical size for a strap for the Jaeger-LeCoultre Master series. The watch is a little less sporty on a leather strap than on its original steel bracelet. Changing the strap colors (I imagine a nice green strap could also work) makes the watch more playful. 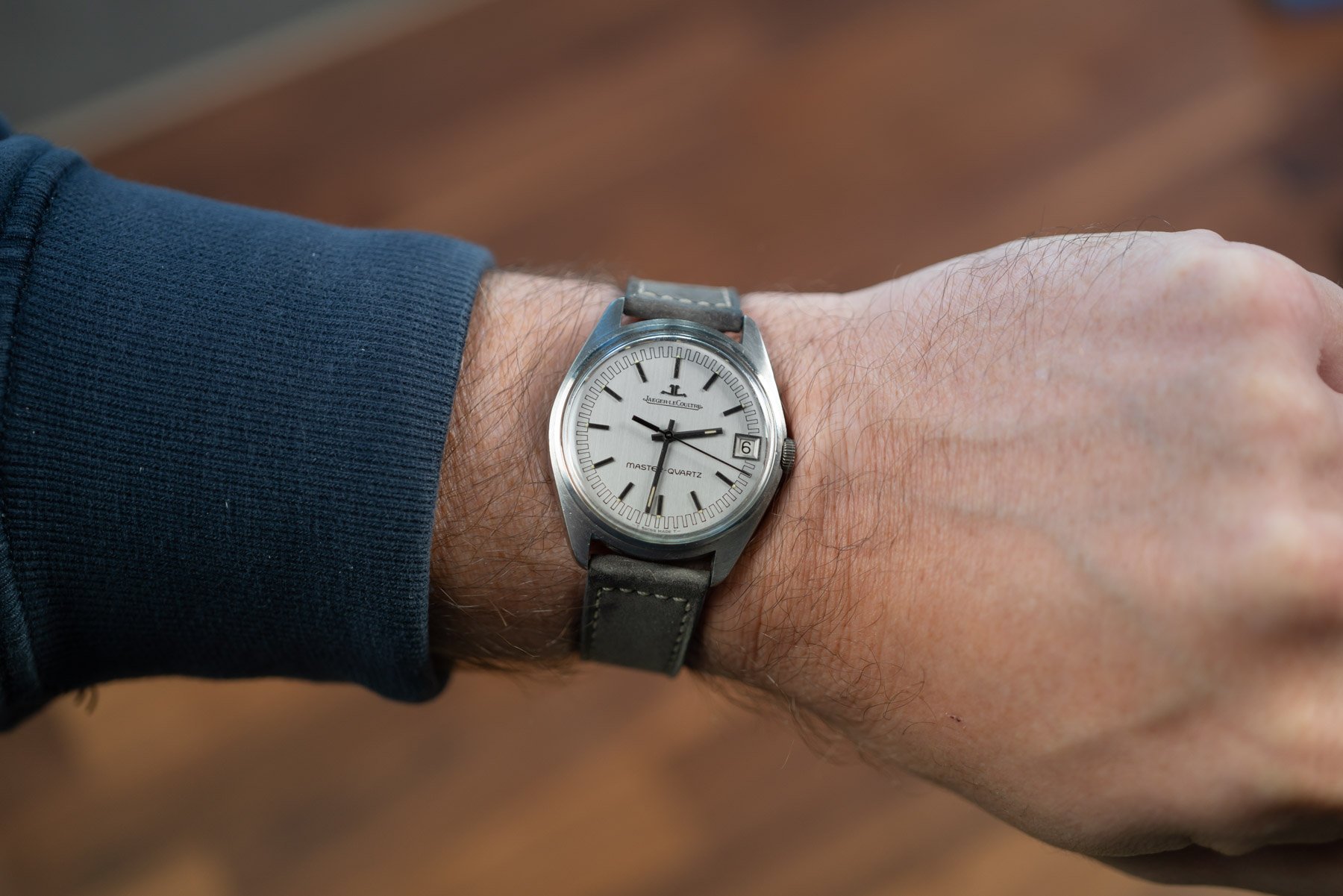 I have to be honest: I had never heard of this Jaeger-LeCoultre Master-Quartz before. I knew about the TV-shaped Master-Quartz model with a bracelet from the 1970s, but not about the one I bought or the UFO-shaped model. They are all powered by the caliber 352, which means there are quite a few of these movements around on eBay and Chrono24. Whenever you need a replacement movement or movement part, you can pick up a donor watch for cheap and use it as a backup for repairs. As the watch is nearly 50 years old, it has its share of wear, but I wasn’t after a new watch or one that looked like new. 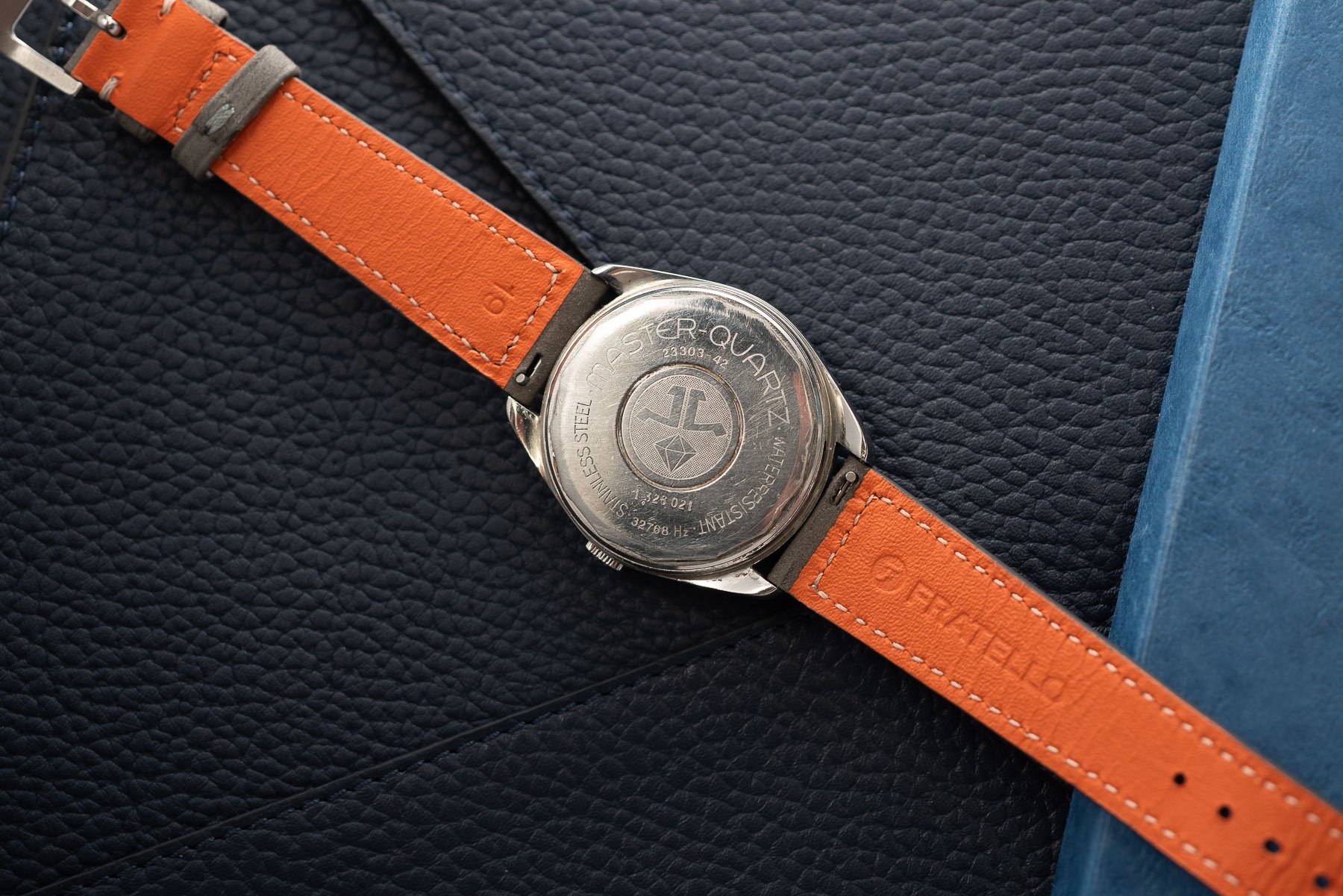 The case back has some scuffs and scratches that appear to me as if a previous owner wore it on a Perlon strap. These straps will “sandpaper” the case back a bit over time. This Jaeger-LeCoultre Master-Quartz has a Plexiglass crystal that had some light scratches on it when I bought it. However, using a tube of Polywatch, I was able to polish them out quite easily. 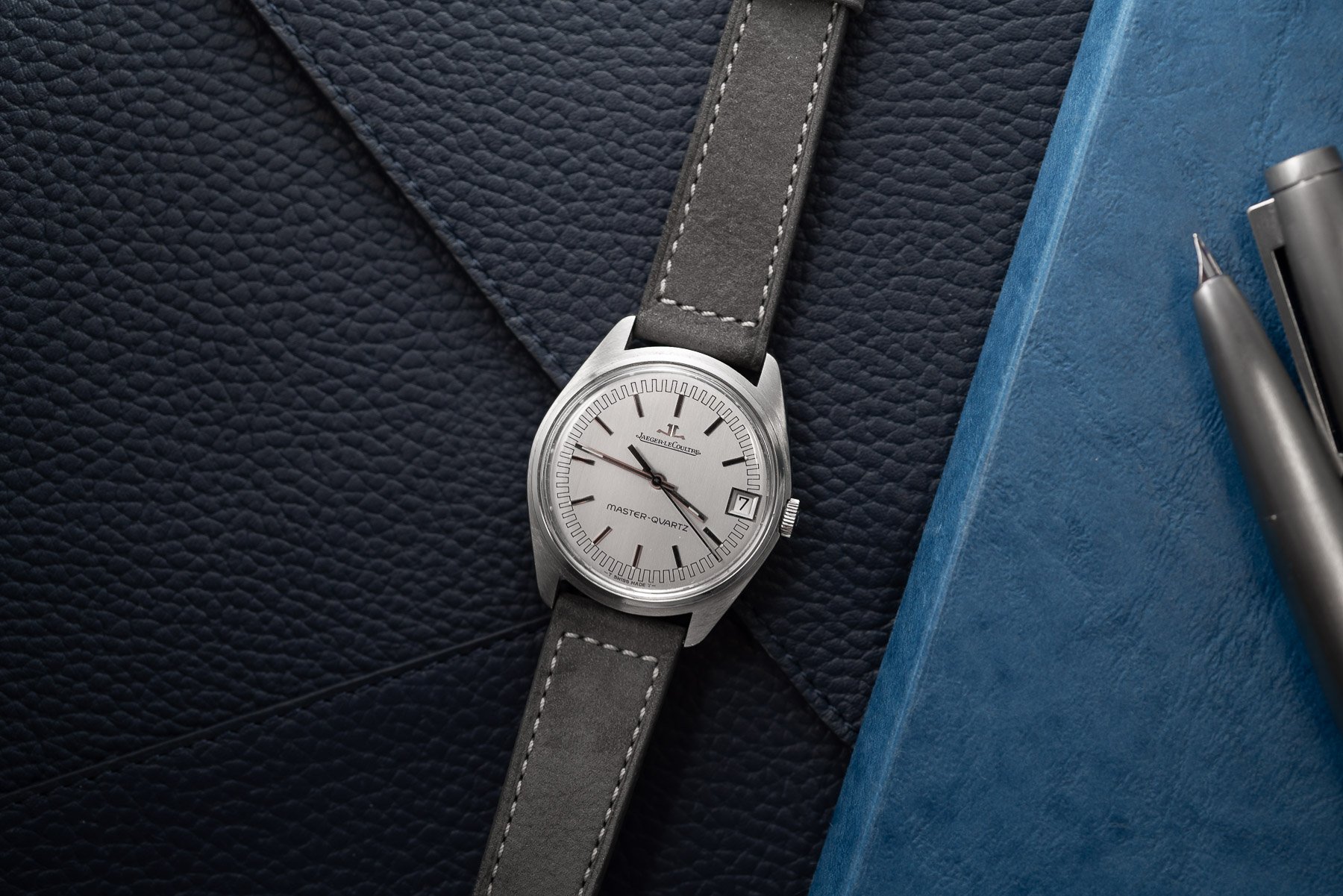 If I had been more patient and just went home after seeing this watch and doing my research, I could have found a similar watch in better condition. However, the dial is in great condition, as are the hands and the case. The case back has its scuffs, but it’s the part I don’t see anyway. I am pretty happy with my bargain Jaeger-LeCoultre Master-Quartz, and I have been wearing it for one week straight. That’s already quite an accomplishment, as I try to wear several different watches per week. I am sure I won’t wear this watch much in the future, but every once in a while, it’ll be a fun one to have on the wrist.

For €800, I think this is a nice addition to my collection. Chrono24 is currently listing about 20 Master-Quartz watches, mainly with other case shapes. Let me know what you think of this watch and the other variants in the comments. You can also find more Jaeger-LeCoultre stories and articles here.