My Seiko Diver Journey — Part One: From Vintage Beginnings To Modern And Modded

About seven years ago, the barrage of online articles and forum (what’s a forum?) threads on the HUGE VALUE of Seiko got to me. At the time, I had just graduated from fashion watches. You’ve been there too, haven’t you? I thoroughly enjoyed my first foray into rattly vintage skin divers, and my first microbrand piece was an Obris Morgan. To be honest, I’m a contrarian (or just vain), and the merest sniff of hyperbole about Seiko repelled me. But boy, was I wrong. This became obvious after my first vintage Seiko purchase, sending me down a proverbial rabbit hole, and starting a personal Seiko diver journey. Today, I sincerely feel I’ve reached the peak of Seiko divers with the SLA023 Marinemaster. But it all had to start somewhere.

My Seiko (desk) diver journey is documented by mostly square-format wrist shots, as it coincides with my addiction to Instagram, photography, and writing. So hopefully, you will also see an improvement in photography throughout this two-parter. Like the men of the Wheeler Dealer TV series, I made my journey through buying one, wanting more, selling it on, and buying something new. On this virtual stepladder, I’ve eventually reached my personal pinnacle in the Seiko Prospex line. Yes, there is now only “the one” diver, while the others have new, happy homes in various countries. But thanks to my watch-a-holism, the Seikos are only one branch of a growing collection. 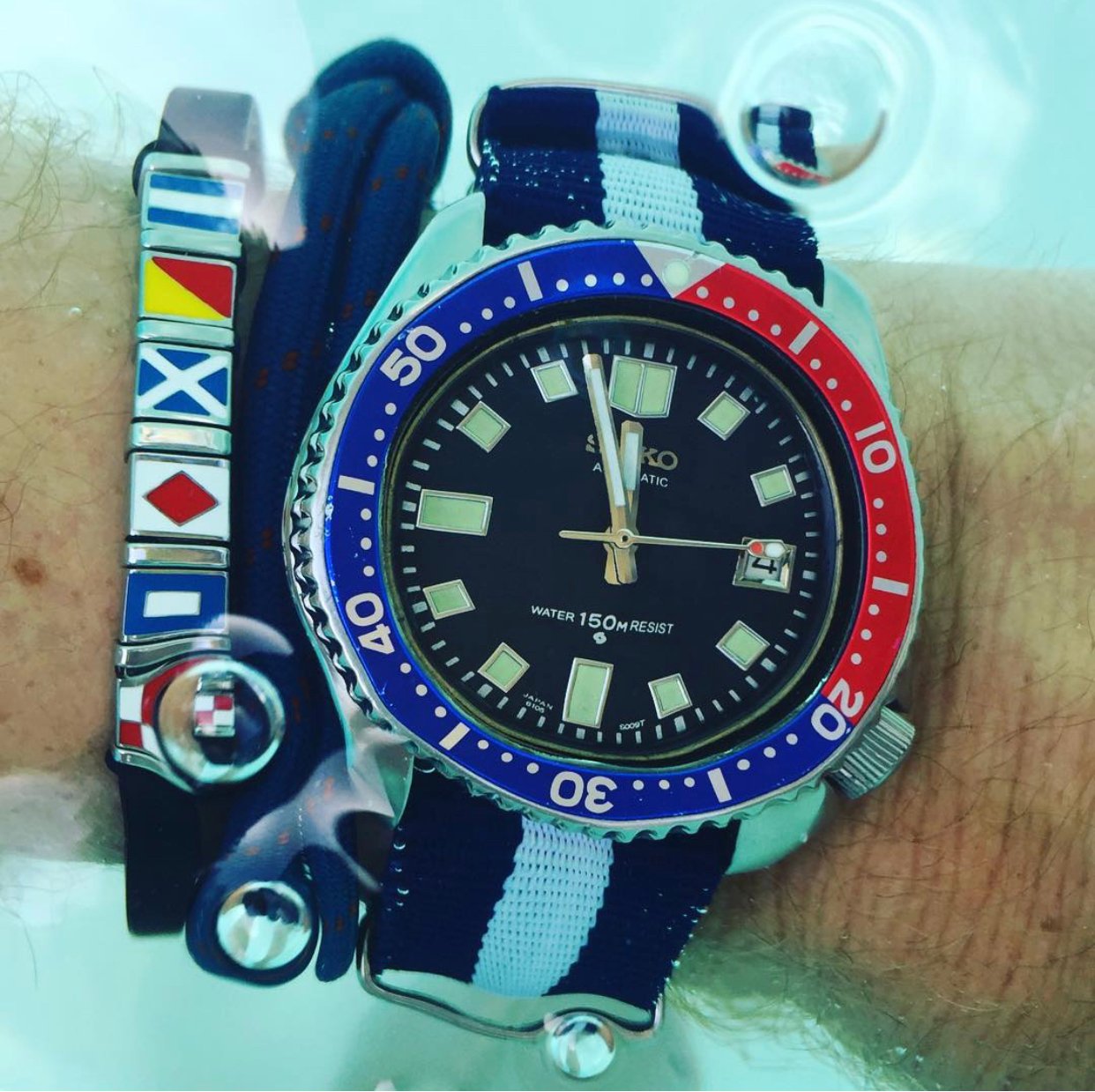 @thorsvaboe tries an underwater wrist shot, and yes, a 40-year-old watch will get a foggy crystal.

In 2016, the first wrist shot on my Instagram was of a Seiko 6309-7290, the bargain ’80s diver. Discovered mostly by chance on eBay, I had one, then two, and then three of these babies. Its SKX-like 42mm shape gave it some vintage provenance and combined with gap-pricing, it made it a bargain. Not the classic Turtle 6309-7040/49, and too old to be a dependable SKX, the 7290 was a cheap wonder. All three of mine were franken-ish, with new, cheap dials bereft of lume. One even had modded Ploprof hands. But wow, that quality! At the time, they cost between $70-130. To me, that was quite costly for a vintage beater. 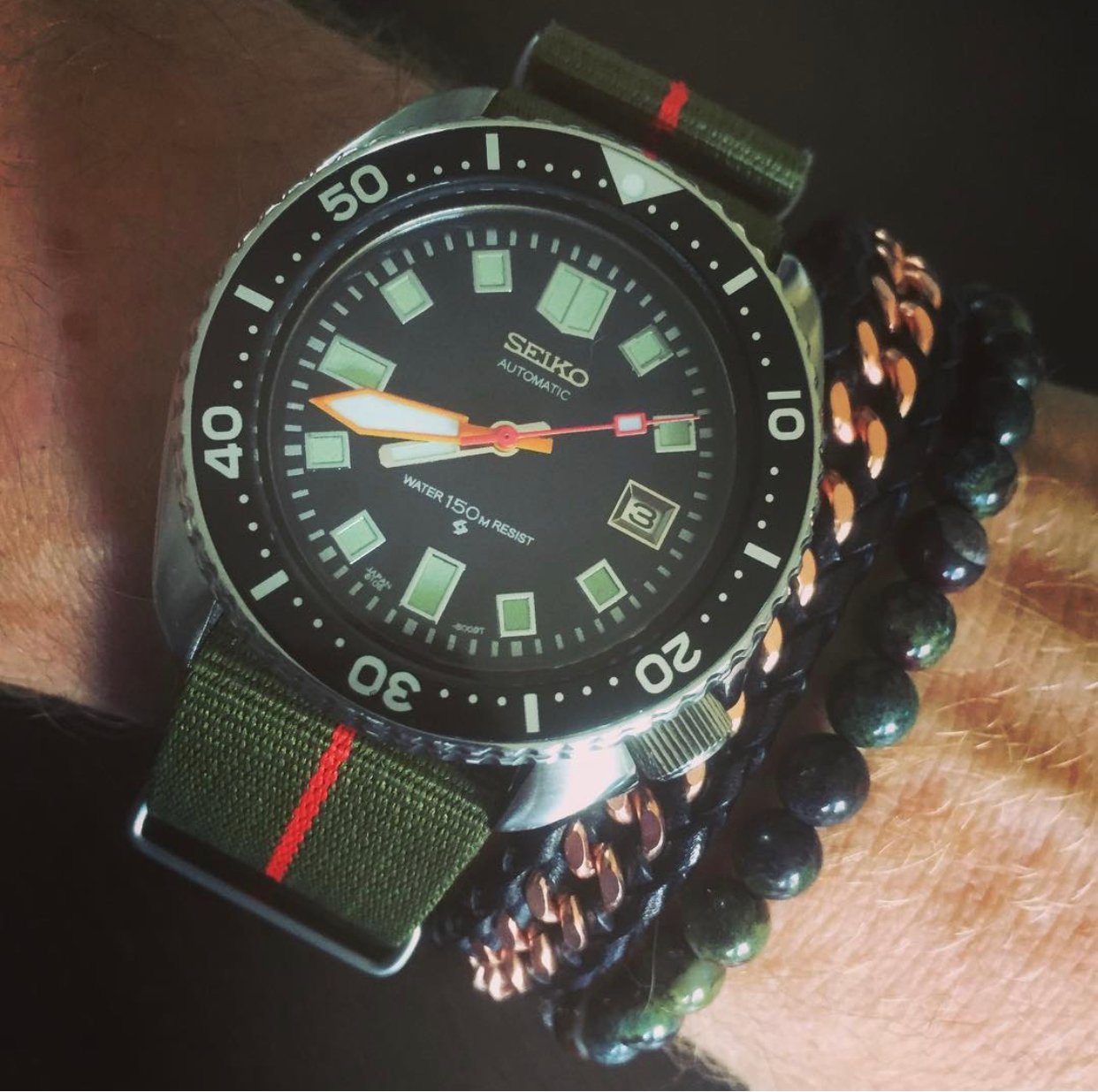 That first taste of the large but comfortable Seiko diver design got me hooked. I’ll compare it to a vintage BMW 2002 I had at the time, after about five British classics. It was old and worn, yet tough and solid as a tank. It was unlike the divers I’d had before. Gone were the sloppy bezel action and loose crowns. The comfort was there. And the case design? I had no idea Seiko were masters of ergonomics, but that feeling from the inward angle of the smooth case with an unobtrusive crown at 4 o’clock was priceless. Suffice to say, the 6309 movement wasn’t COSC-accurate on any of them, but at a decent-enough +/-15-20 seconds per day, they impressed me wildly. I would also raise my hand and admit that these over-polished nuggets of horology turned me into a strapaholic. 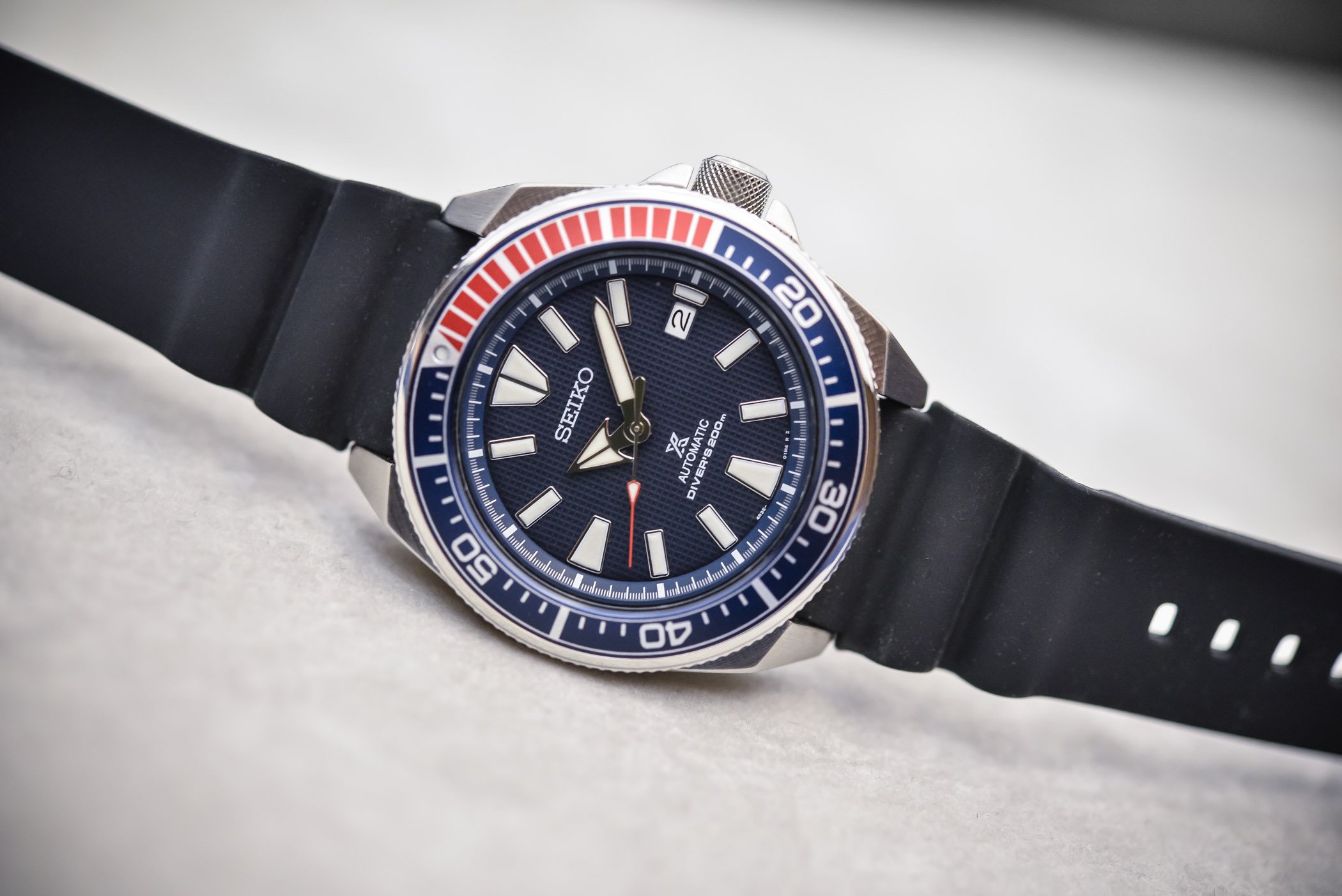 This Seiko Prospex Samurai was my awakening to modern Seiko, and it lasted me all of 30 days before selling it to dig myself further down the Seiko rabbit hole. Yes, I did have a sub-$1000 Swiss watch at the time, a smooth Oris Artelier, but I equated tough sports with vintage Seiko. The Samurai popped up on a US forum-based, pre-owned watch page and seemed too good to be true at the price. To be fair, it was so cheap at only a year old that I bought it to flip and upgrade. But it was almost too good to let go. It did feel it a bit big at 43.8mm, but it was softly comfortable on the silicone strap. 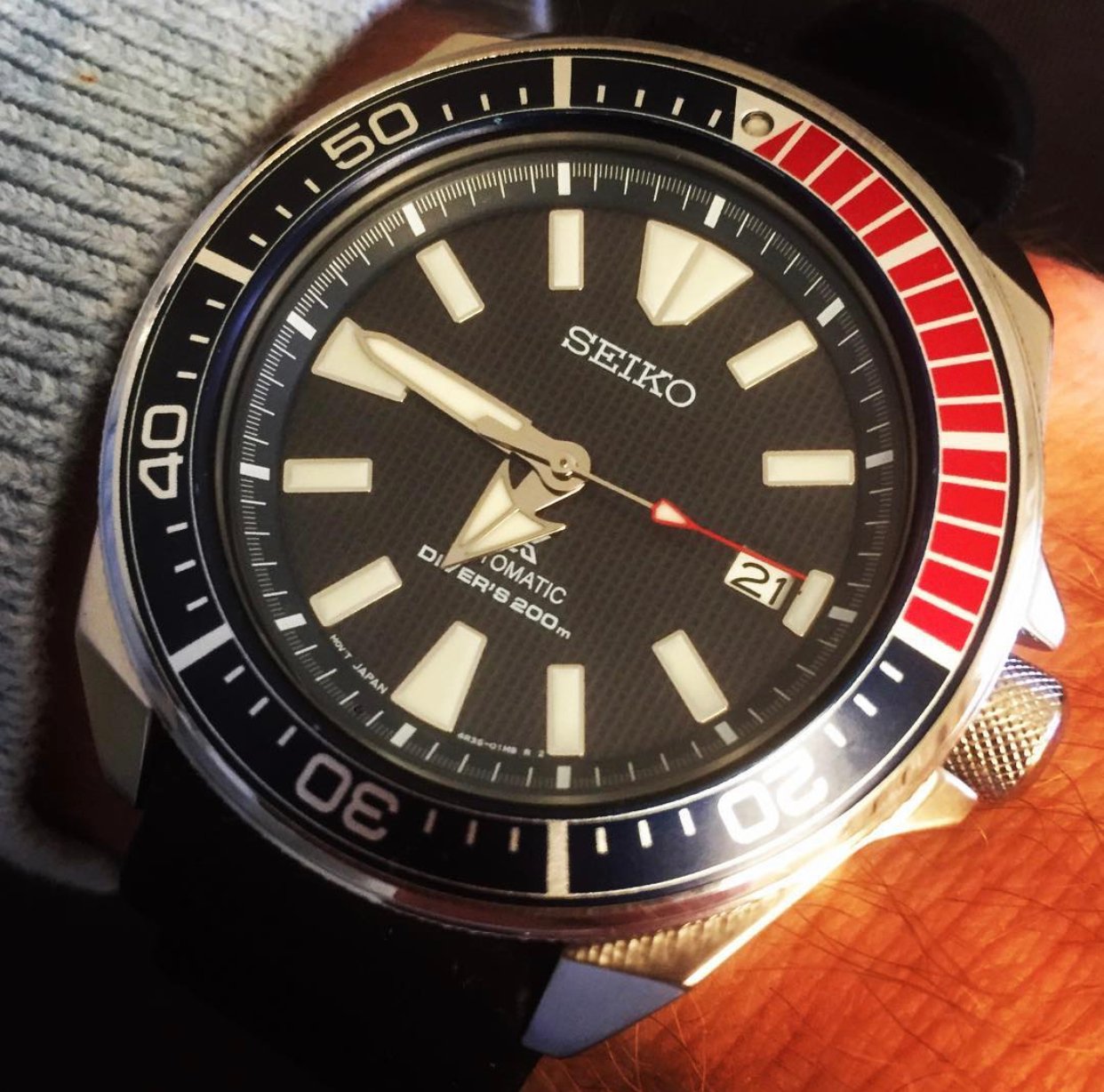 The Samurai’s 4R35 movement was almost ETA-accurate, and I paid less than $350 pre-owned. What was this in-house witchcraft? With an angular, tough case and superb finishing for the price, it made me sell more vintage pieces the week after, and I was hooked. The Pepsi bezel didn’t align 100% at 12 o’clock (what, really?), but the dial made up for it. With a delicate pattern in dark blue and applied indices, this was Swiss-like quality for pennies. The bold sword-and-arrow hands looked the part, and the lume was something else! To wake up after eight hours to find it still glowing was completely new to me. A pre-owned Samurai will set you back less than $300, and it’s a great place to start. Unfortunately for me, however, I was already hooked on blogs and YouTube reviews and wanted to climb the Seiko ladder. The mid-range 6-series movement and a decent bracelet were beckoning, and the new jade green JDM/US Sumo sure looked tempting. 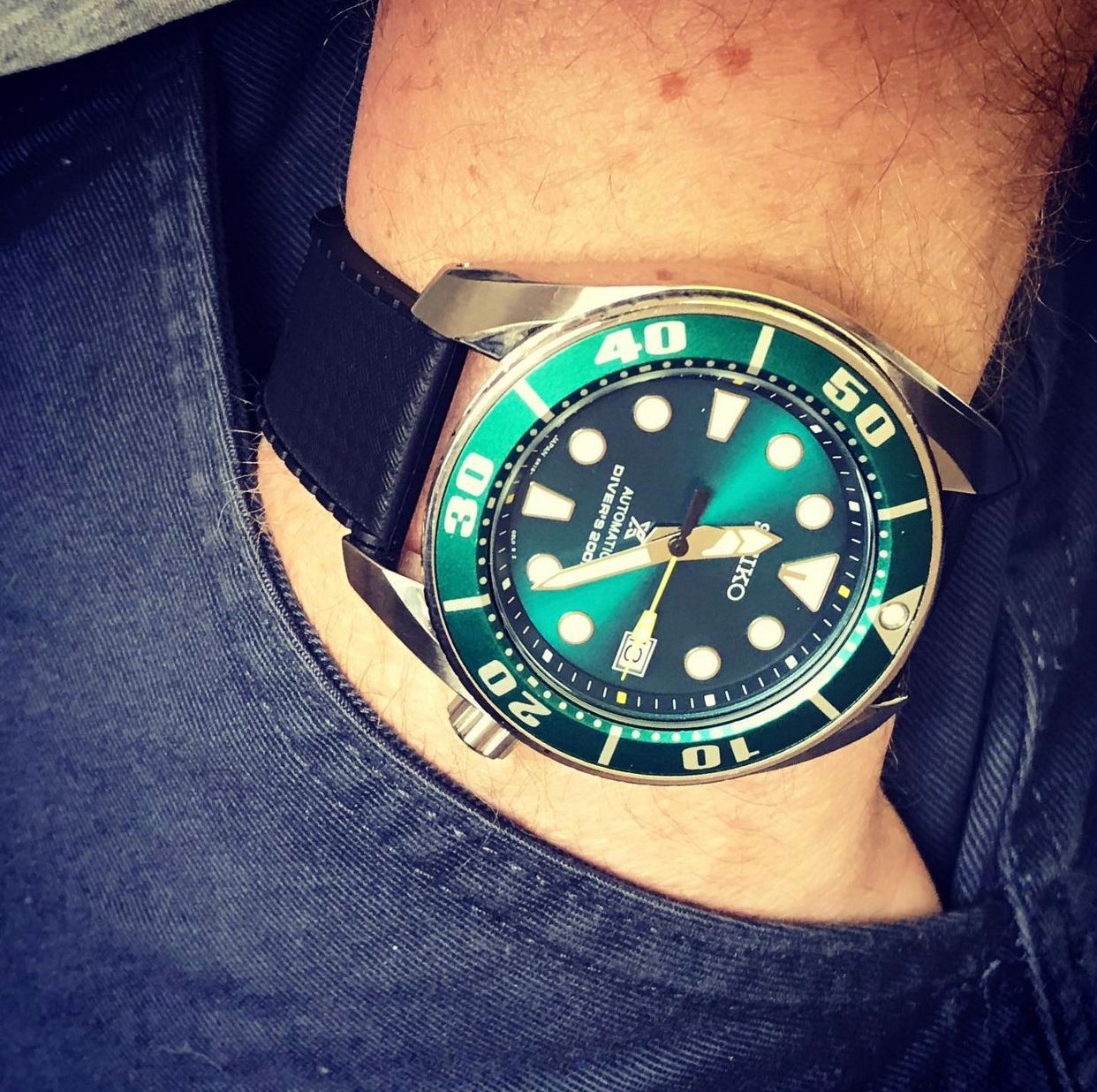 Ah, my first purchase direct from Tokyo, and the thrill of it all. The Seiko Prospex SZSC004 got me so good, I sold two other watches including the Samurai. That green was simply delicious. Did the Sumo seem a tad on the fat side like its name suggests? Well, yes. It was long, at 53mm lug-to-lug, and chunky at 45mm in diameter and 13mm thick. But come on, those details, for around $600, were incredible. It was an Asia and US model only, so I had to find a Japanese AD willing to ship it here. But the hunt is part of the charm, isn’t it? This is the one I seriously fell in love with, straight out of the Japanese well-wrapped box. Its 6R15 caliber was, most days, as good as my ETA-powered Black Bay, and its nominal size felt like it was shrinking by the hour. 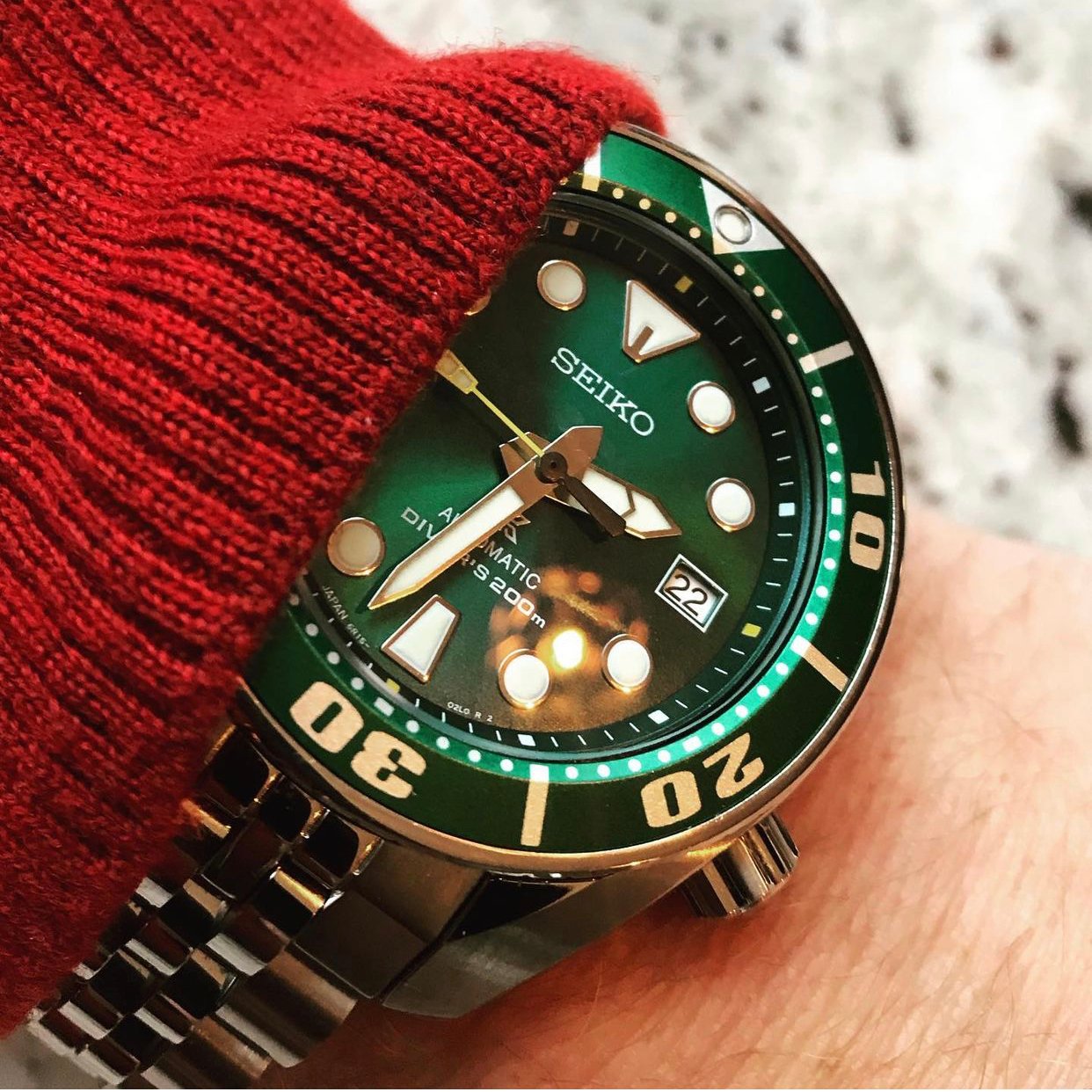 @thorsvaboe wrist shots are improving but under a shirt? I was struggling.

The general case design, which pre-dates the Prospex label, has an ergonomic DNA like no other. The inwardly angled case sides of the Sumo have familiar but refined Seiko traits. Broad lugs curve down with a polished chamfer towards the end links. And the chunky bezel? It seems almost too thin at the sides, as it is actually recessed into the case. The case is large at 45mm, but it only measures as big from its outer, superbly finished edges. The actual case back area touching your wrist is smaller than 40mm. The deep green dial doesn’t match perfectly with the bezel in direct sunlight, but why be picky? Its sunray finish is just pure eye candy. Bright pops of yellow at the quadrants of the minute track match the searingly bright seconds hand. The applied indexes are of superb quality, and with searchlight brightness, the Sumo is an excellent diving buddy. You know what? It even made me buy diver’s gear, though it may not have been used yet. The Sumo was considerably upgraded in 2019 and covered with enthusiasm by Mike here. It retails for around $800. 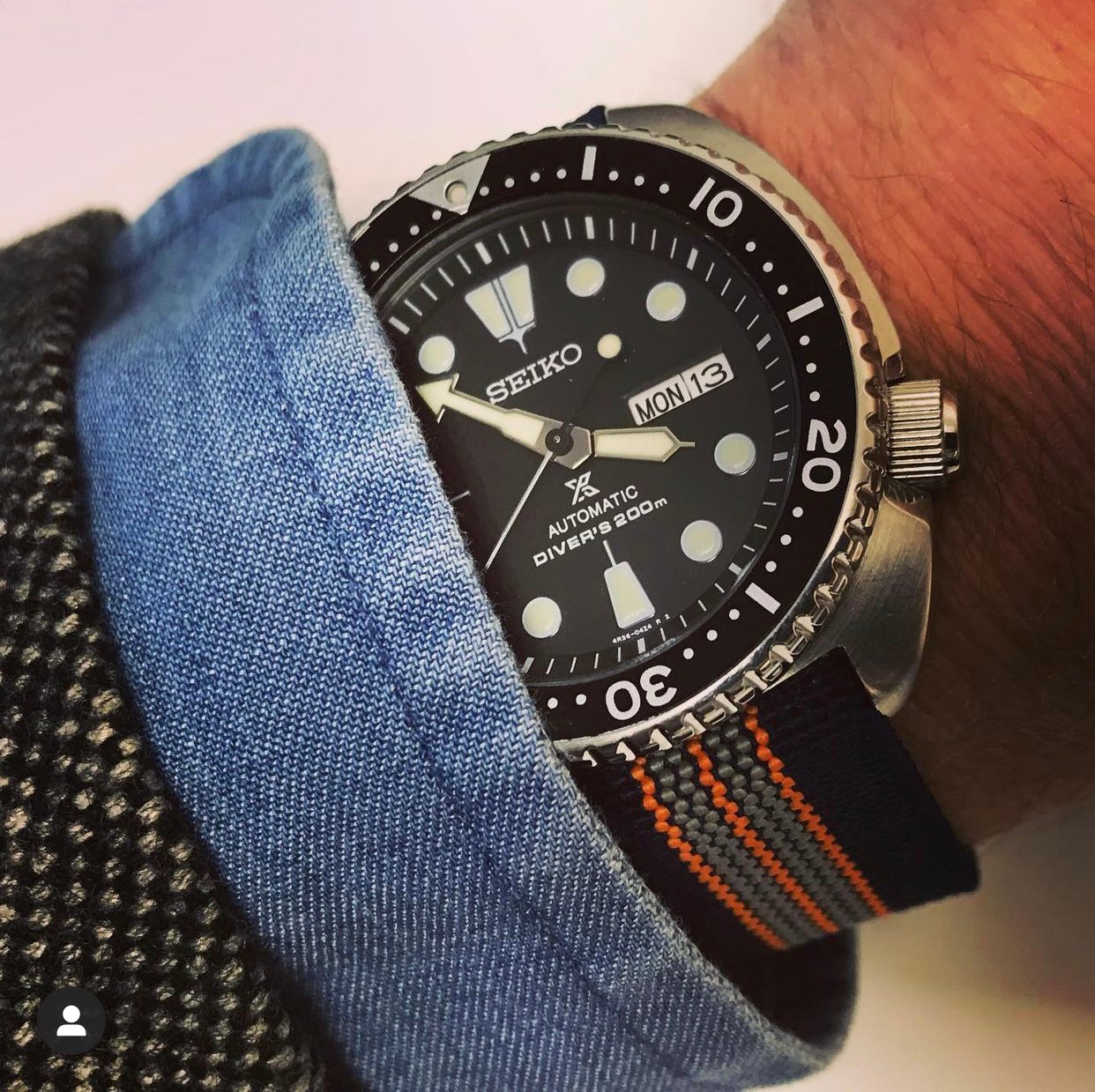 The challenge with the affordable prices of Seiko divers is that you might end up with several, and that’s exactly what happened to me. Even while I was already enthusiastically writing about the delights of decreasing watch sizes, I had a split personality. While I loved 36-38mm pieces that just slip under a slim shirt, my love for Seiko was too strong, and I got the Seiko Prospex SRP777 Turtle. It was a cool daily beater to accompany my desk diving exploits and another smooth, big-cased Seiko. Like the Sumo, and recognizably similar to my eighties 6309s, it is supremely comfortable. It has a smoother, less defined finish than the Sumo, with a similar fat case measuring 45mm in diameter and 13mm in thickness. And much like the Sumo, the size is all good. The starting point to many people’s Seiko-holism, the 777 is the most boring New Turtle. But I found it “monochrome cool” and a tough nugget that has all the vintage Seiko design cues without breaking the bank. 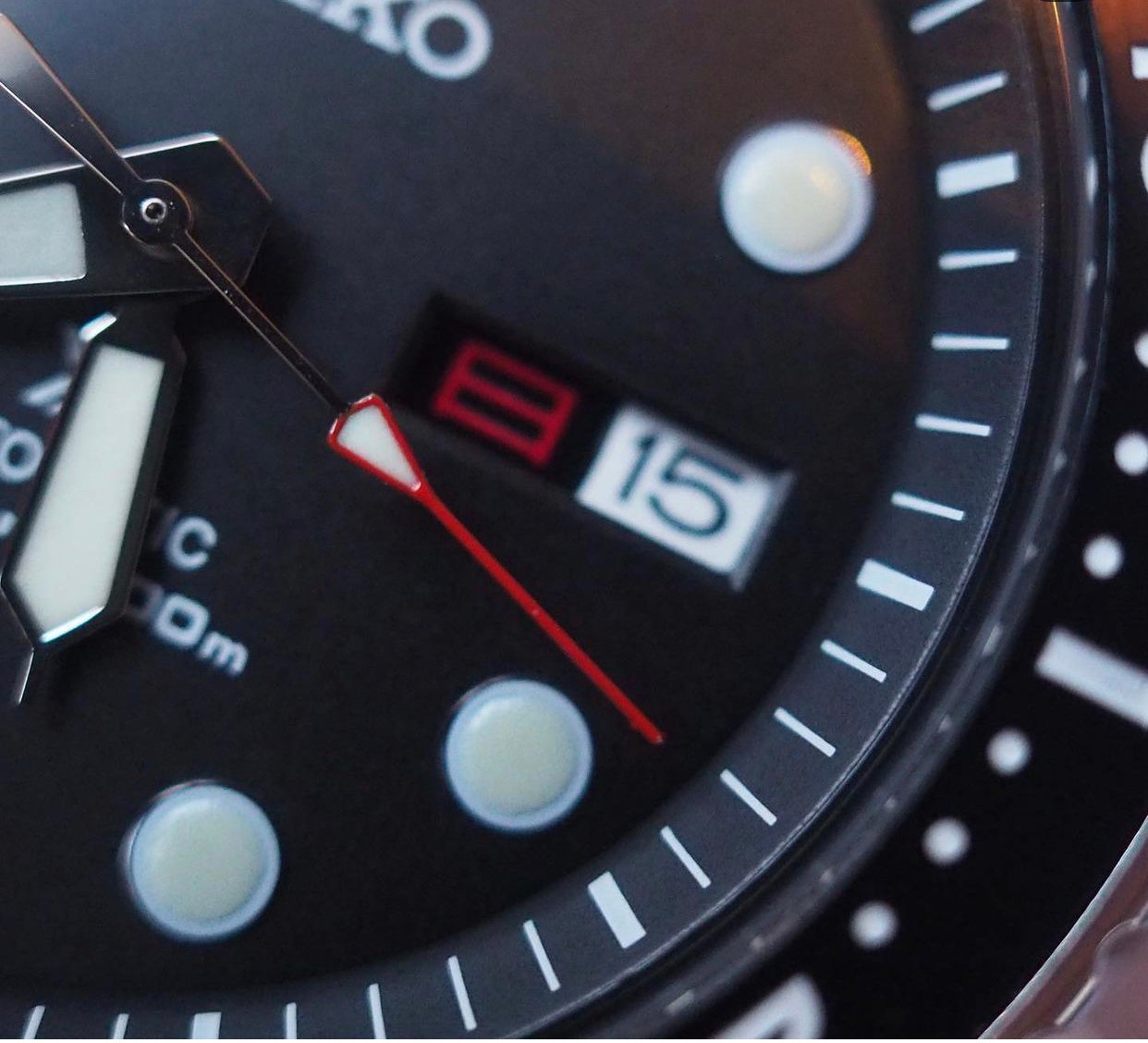 But is it tough enough as a diver? The hands are cool Seiko classics, on a balanced, legible dial, and the bezel feels solid for the price. However, the temptation was too strong, and I got it modified. Sorry, purists. It received modest changes, like a sapphire crystal, a black ceramic bezel, and a kanji date wheel. I enjoyed the stealthy classic look, and the only twist was a bright red Samurai seconds hand for a pop of color. The 4R35 movement did need service, and herein lies my environmental faux pas. A new movement costs less than half of the service, so I swapped it, undermining my own sustainability goals in owning a battery-less watch. Today, there are a vast number of new Turtles to pick from. Check out the SRPF77K1 on a grey-blue rubber strap. Its ocean-depth dial complete with shadowy images of manta rays is nothing but inspiring. The Turtle retails for between $500-700, a big value for a tough, everyday watch.

Stay right here on Fratello Watches for Part Two, where I move ever further up the proverbial steps of Seiko tool watch fandom. What’s your Seiko diver story? Did mine inspire you, or are you already a Turtle collector with a full box of all the references? Let us know in the comments below.

Hot Topics
Introducing: The Omega Speedmaster Super Racing With Spirate System
165 comments
Design Vs. Specs — Which Is More Important To You When Buying A Watch?
87 comments
New Release: The Limited-Edition Seiko Prospex SLA067J1 Diver
64 comments
My Predictions For New Omega Speedmasters In 2023
60 comments
The Best Independent/Microbrand Alternatives To The Rolex Explorer In 2023
53 comments
Popular
Top 10 Rolex Watches – Overview of Models Favoured By Our Readers
Fratello
25
(From The Archives) Shut Up & Read The Truth About Cartier Watches
George Cramer
21
#TBT A Vintage Seiko Buyer’s Guide to Affordable Goodness
Michael Stockton
32