Romaric’s latest collaboration with Nivada Grenchen only confirms that we can hardly ever get bored with his creations. Meet a blue queen of the oceans, the Nivada Grenchen × seconde/seconde/ Jellyfish Depthmaster.

It has been almost two years since I got to know Romaric André. I instantly fell in love with his strictly limited runs of daringly creative and carefully manufactured watch hands he installs in vintage classics. We already had the chance to review one of them, the Omega Seamaster 2759-7SC 2761 from 1956 with a replaced second hand in the shape and color of the Cousteau cap. 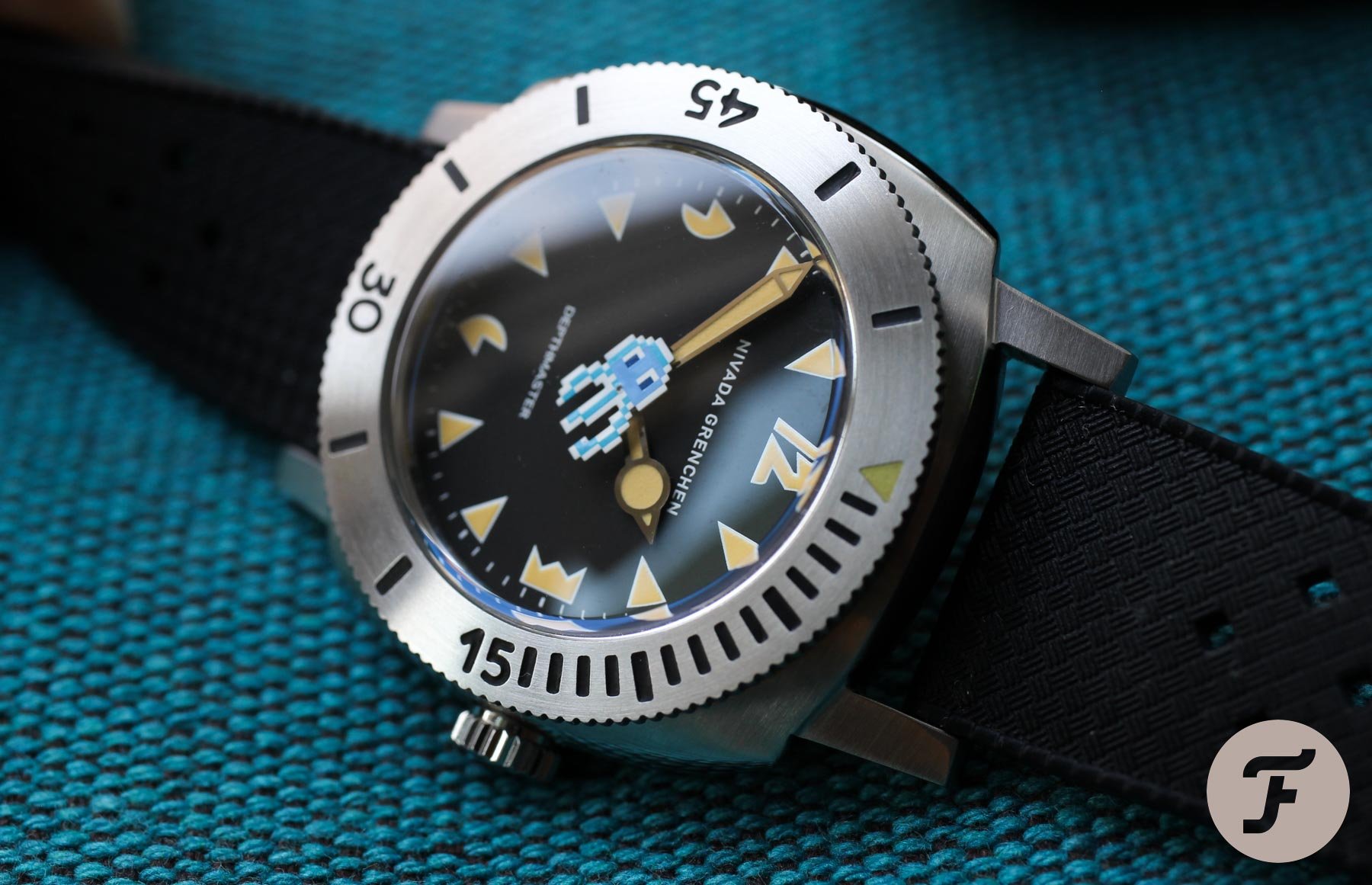 From vintage to modern

I was sure it would only be a matter of time before Romaric and his company seconde/seconde/ became a go-to in the watchmaking world. It was inevitable that watch brands would reach out to create some exciting collaborations. It all started late last year with the Massena LAB “Big Eye” Uni-Racer and was followed by the H. Moser & Cie “Less is Moser”. Today, we are looking at his third collaboration project with Nivada Grenchen, and spoiler alert, there will be another two collaborations coming before the end of the year.

Seconde/seconde/ is as daring as the colors on its hands made by the last surviving manufacturer in French Jura. Their knowledge goes back to 1907 and their precision calculates to +/-3 microns. When Romaric first approached them with his idea, they might have thought he went crazy. But it seems it worked out for both and they have developed a nice partnership since. To see Romaric’s latest ideas on made-up watch+hands combos, I highly recommend you to follow seconde/seconde/ on Instagram. Not everything goes to production, but the seconde/seconde/ feed is a textbook example of originality and craft. 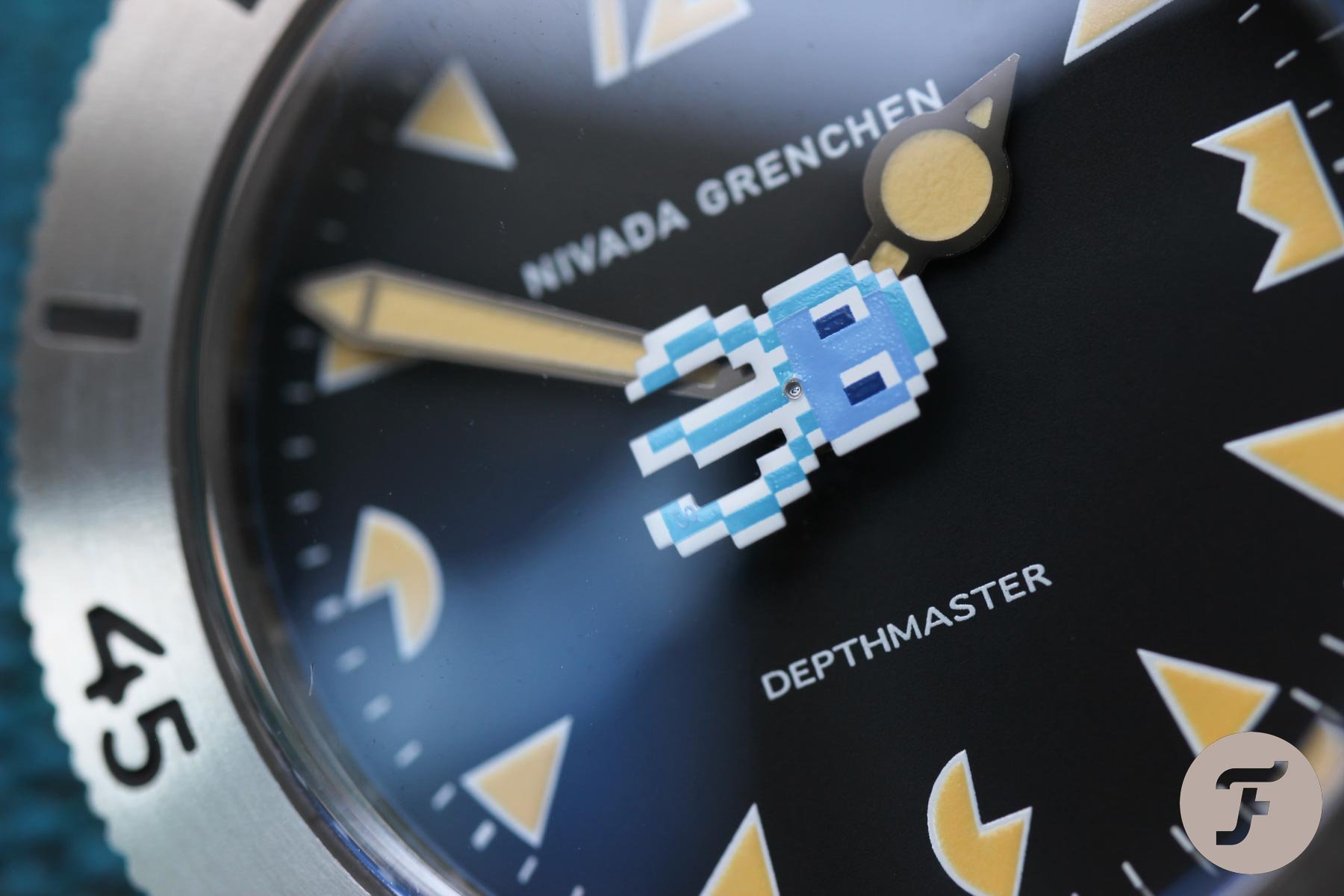 Do we need to introduce Nivada? I bet you already know their vintage stars such as the Chronomaster, Travelmaster, or Datomaster. And you already might know about last year’s rebirth story of Nivada and CSAD. Since Balazs has looked deeper into other Nivada revivals such as the Antarctic Spider or the legendary Pac-Man or Baby-Panerai Nivada Grenchcen Depthmaster. And it is the last mentioned juicy orange-lumed Depthmaster that got the special opportunity to be taken into custody by Romaric’s seconde/seconde/ fantasy.

Guillaume Laidet from Nivada is French too and he naturally exchanged some messages over Instagram with Romaric. Guillaume’s question was: “what would you think about that Depthmaster?” And it was just enough to get Romaric’s creative mind rolling. When I asked how many designs there were to choose from, Romaric instantly shot me down. “I have worked and come up with one design only. The final design.” 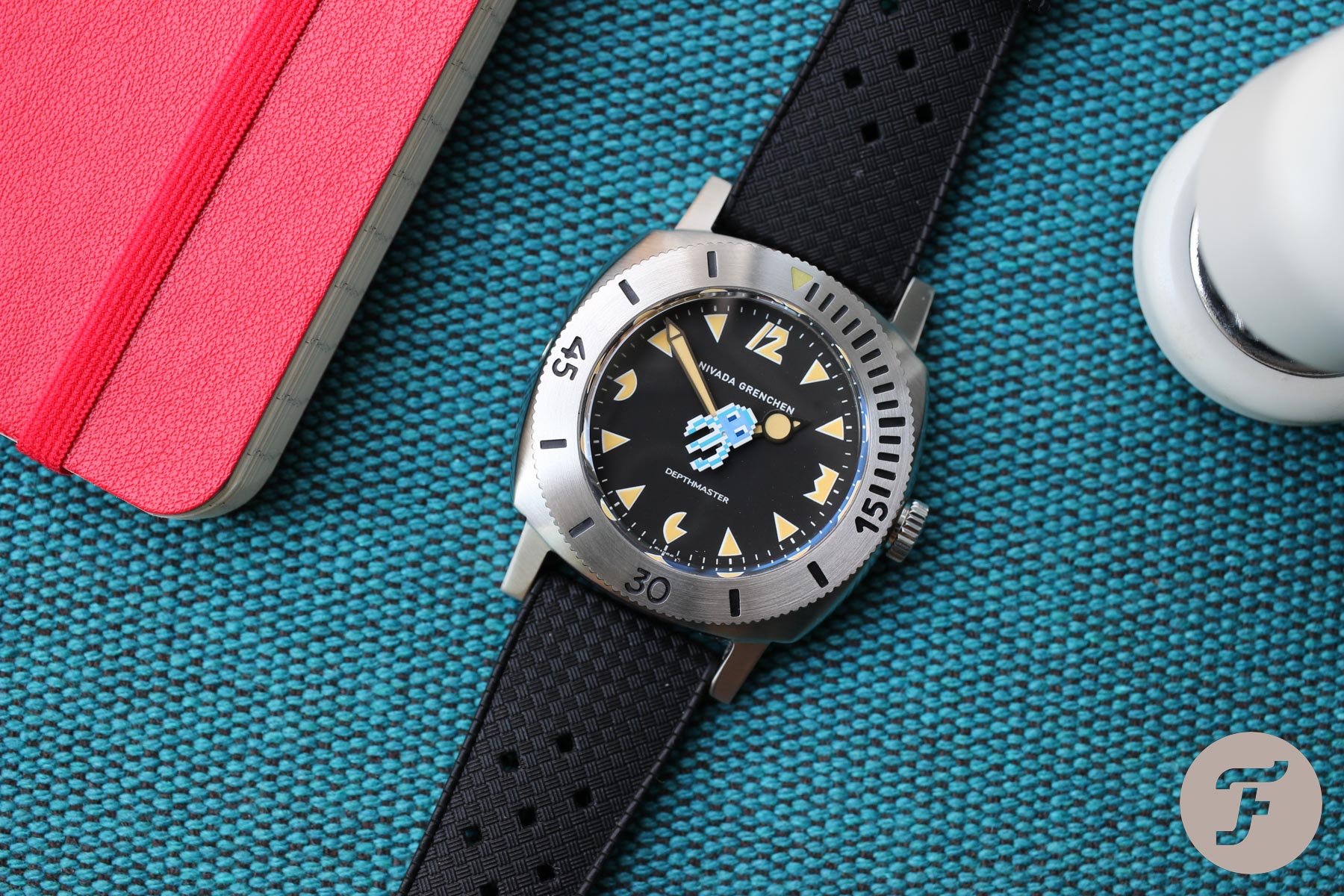 Jelly of the year

Well, in a very Romaric-like fashion, he chose what many haven’t opted for before. A jellyfish. I guess a seahorse or a turtle is more photogenic and appealing than the gelatinously clumsy ghost of the ocean. And that’s another link between Pac-Man and his escape from the ghosts chasing him since the 1980s. “I liked the fact that jellyfish are not marketed enough, they have never been used as emblems when it comes to divers watches. I can’t understand why…”, Romaric André explains the story behind his eye-popping jellyfish spinning in the new Depthmaster. 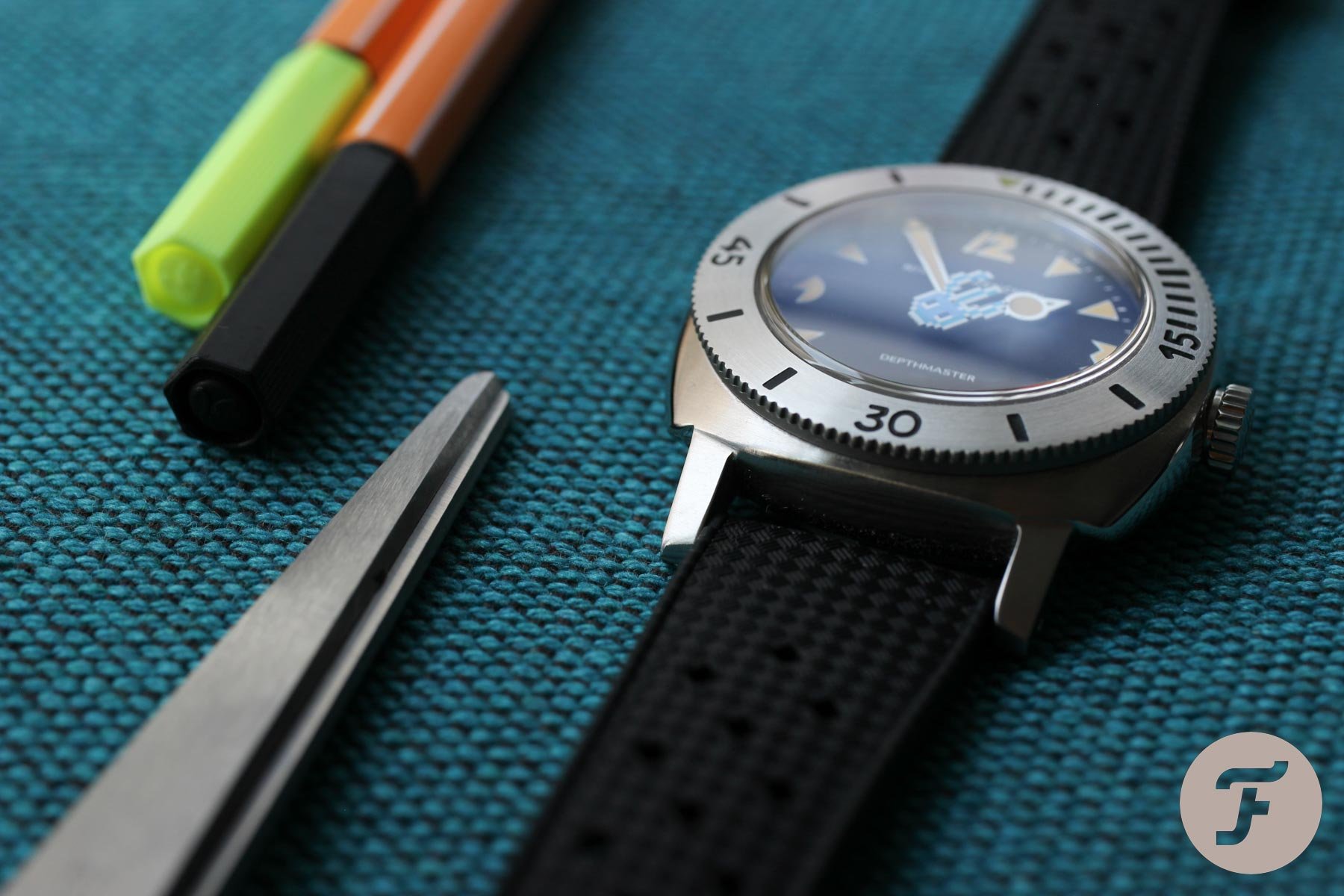 How does a jellyfish change the watch?

I will not take much time in introducing the Depthmaster or its specs — which include an automatic helium escape valve — as Balazs already did so a few months ago. I will rather focus on how seconde/seconde/ upgrades or downgrades the iconic Pac-Man. If I compare it to the previous two seconde/seconde/ collabs, I see this one as the best one. H. Moser & Cie. came up with a brilliant idea, but I found the final rubber-hand design a bit cumbersome and a bit hard to read. The Massena Uni-Racer was much better in terms of execution, but the idea was a bit too straightforward for my taste. It’s the Jellyfish Nivada Depthmaster that shows the best from seconde/seconde/ in my opinion. Why is that? 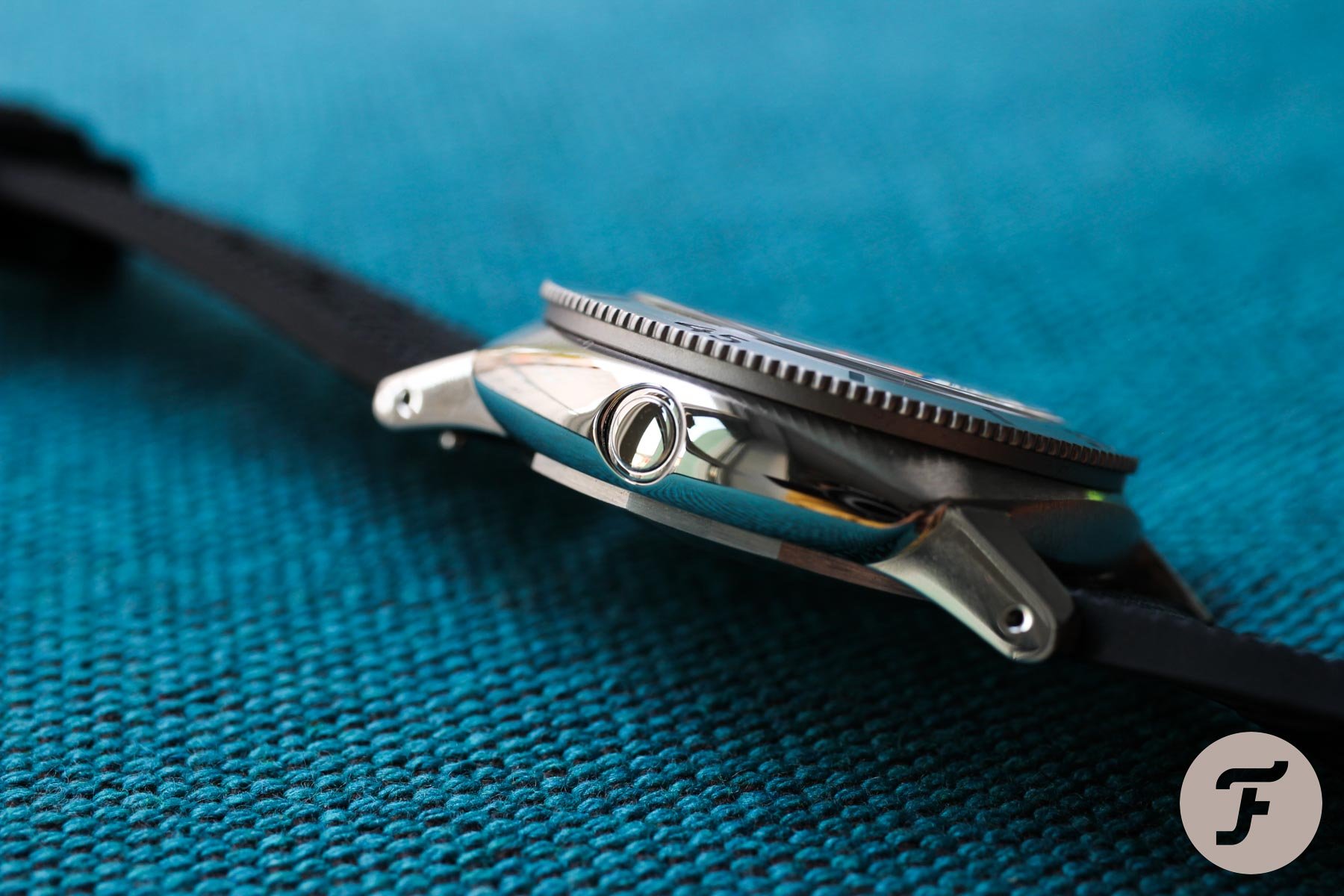 They found each other

You can put a funky pixelated whatever-shaped hand on any sports or dress watch. The bigger contrast in the style of watch and hand, the bigger the effect should be. Well, at least that’s what I thought, but I think the H. Moser collab does not confirm this hypothesis. When I saw the big-headed and big-eyed jellyfish escaping from the predatory indexes caged in the charismatic Deptmhaster watch case, I told myself that they were born for each other.

The jellyfish has that alarming look that only victims looking over their shoulders have when chased by the predator.

The square Jellyfish Depthmaster case bloats under the pressure to keep all the creatures inside. Its oval curves make you feel it will explode any second. Romaric added one particular detail that helps to build the Pac-Man story. Given the fact that the Jellyfish is designed in a simplified pixel art style, it’s astonishing how much character it has. The jellyfish has that alarming look that only victims looking over their shoulders have when chased by the predator. The three thin tendrils even look like they’re about to start running at times. 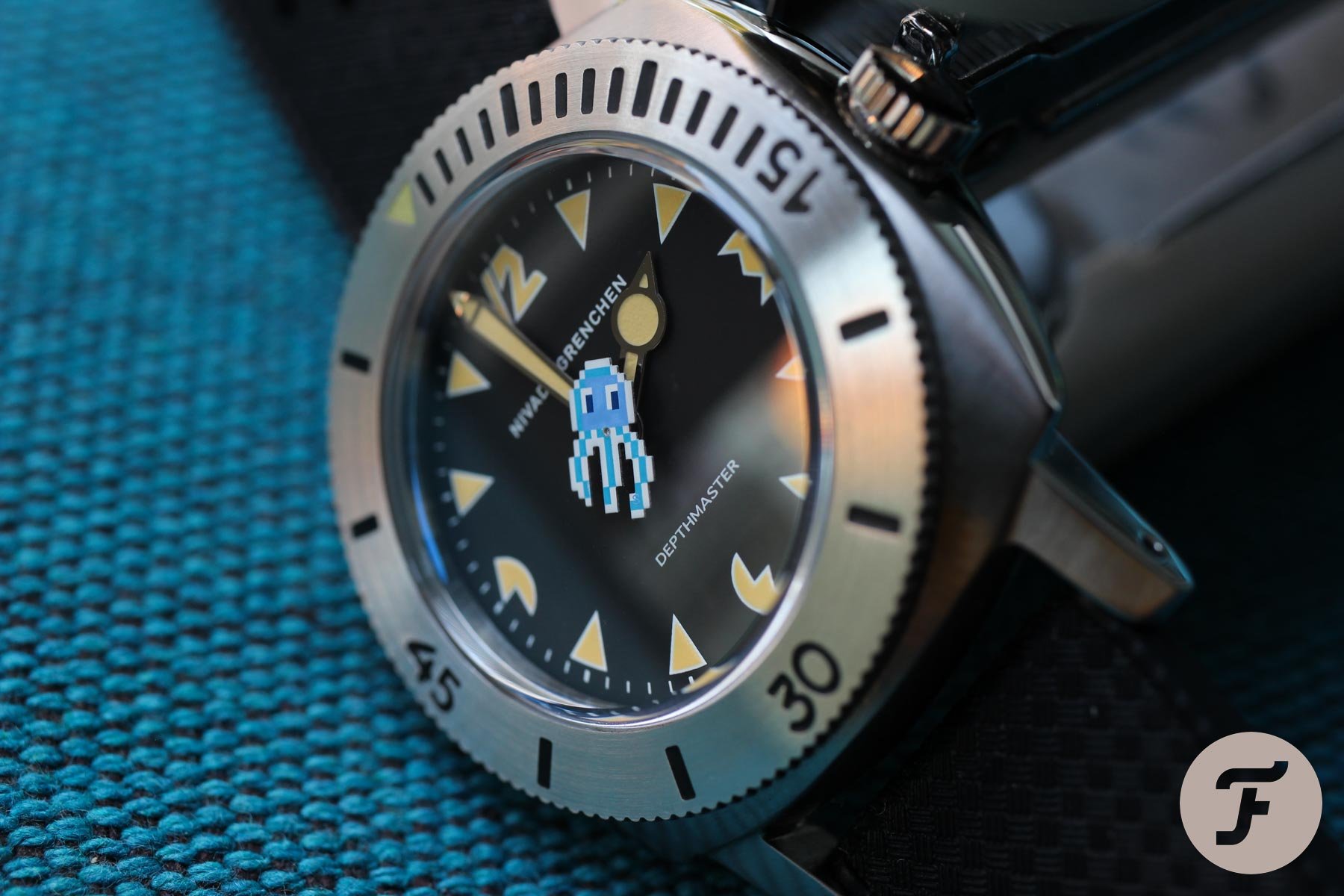 Was it a challenge to make it a jellyfish?

At some point, I asked myself, how safe it actually is to have a seconds hand like that fitted in your watch. “When you work on the second hand, you have to be vigilant about the specs of your design, weight, and right balance,” Romaric says. But he does it every day to a number of watches. And all his previous creations are running, so I guess you are safe in his waters. Nivada and seconde/seconde created a set of five colors, each available in a surprisingly low supply of just ten pieces. No wonder then that the €1,085 price tag made them all vanish seconds after the listing. The last batch should come alive with our friends from Hodinkee soon, so sharpen your eyes and pray to get lucky. 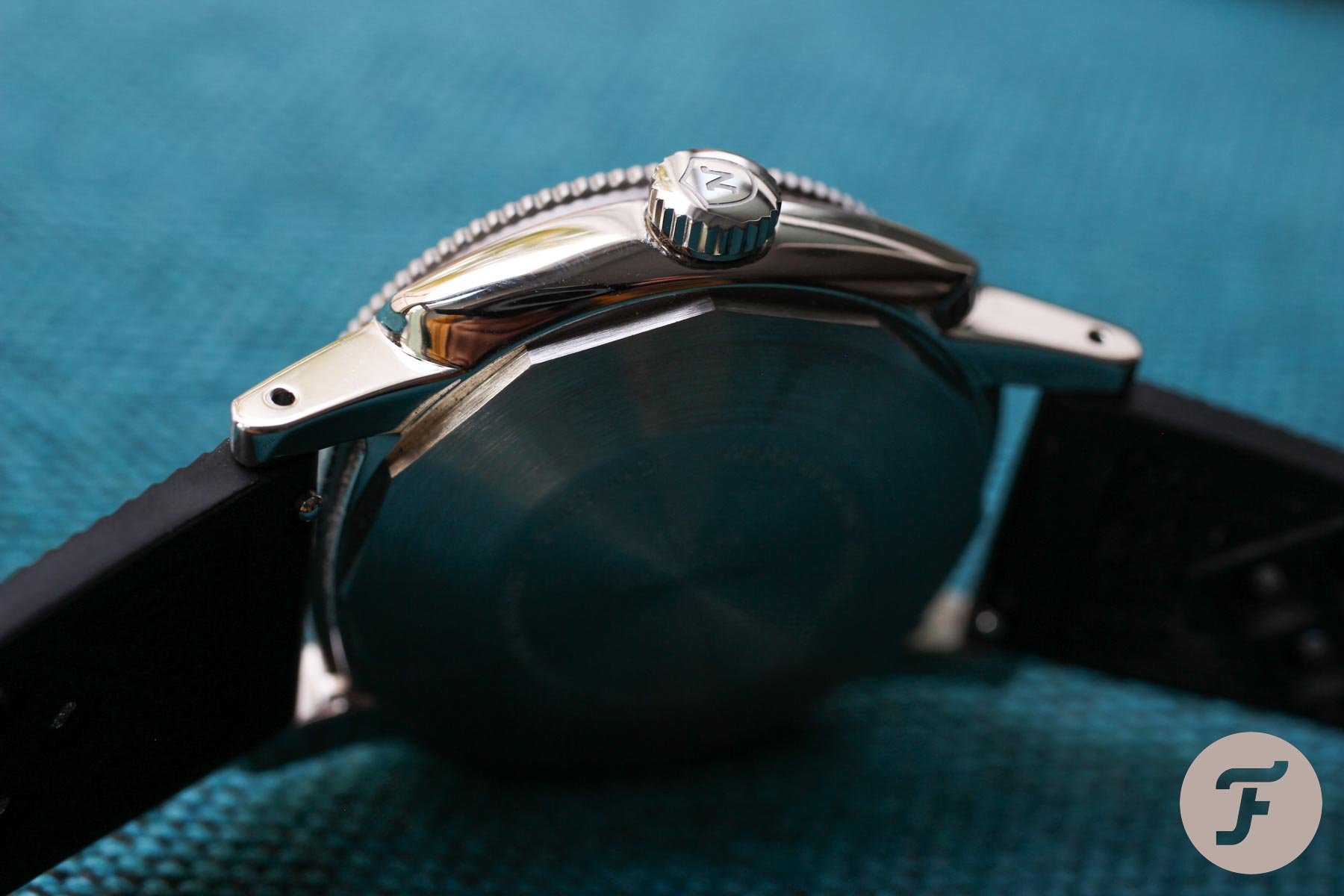 It wears like a charm. And though it may look tiny on the desk, it’s pretty present on the wrist. This is due to its water-resistant armor, ready to take it down to 1000m. Twenty points out of ten for the buckle design, and the same score goes for the thin bezel, its legibility, construction, and easy operation. Eight out of ten points for the soft vulcanized rubber strap that I struggled to get used to — it was either too tight or too loose. 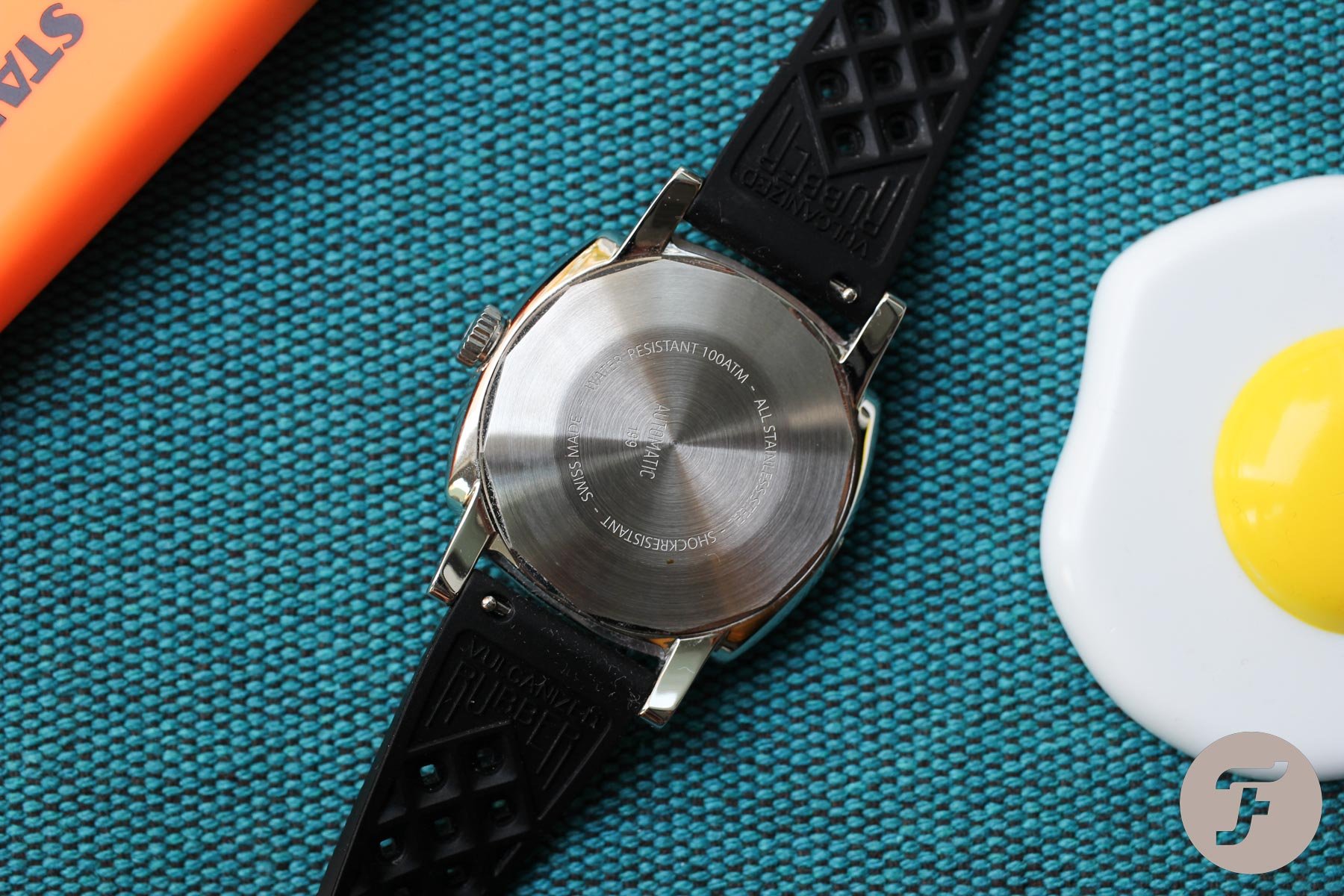 I spent two weeks with the Nivada Grenchen × seconde/seconde/ Jellyfish Depthmaster, and it was quite pleasant indeed. Everything from the packaging to the wearing experience. I hate Hummer-sized watches, so this “Baby-Panerai” Pac-Man is just about right if you prefer a modestly-sized dive watch. The decent case specs allow it to be worn in the office as well unless you are under a black-tie curse. The case back could have featured something extra, but in the end, it’s a tool watch. If you are one of the fifty who managed to grab one, you definitely made one of the top investments of 2021.