That wasn’t easy. It’s alway difficult for me to take my Rolex GMT-Master II, which I wore for 52Mondayz week #36, off my wrist. Something serious has to be brought into position to manage that. What else could that be except an Omega Speedmaster Professional? 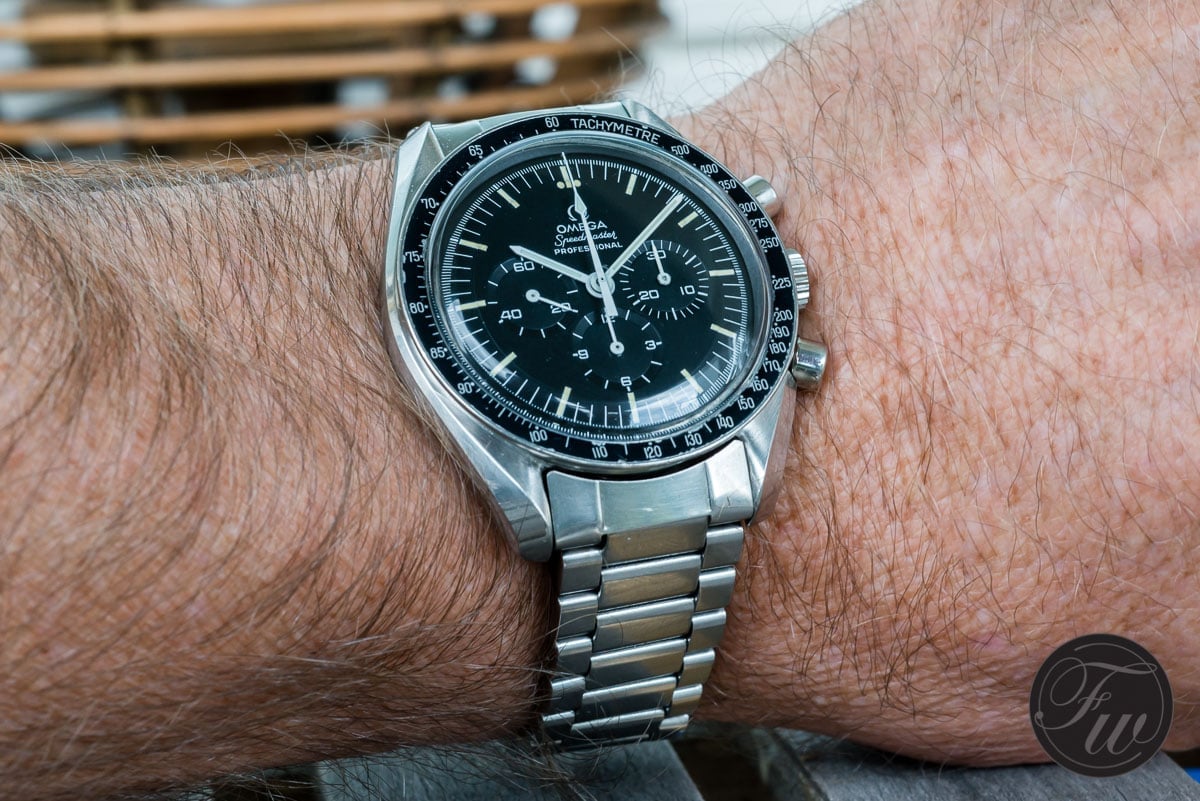 The Omega Speedmaster Professional 145.022-69 Straight Writing on my wrist

And I decided to go vintage this week. Reference 145.022 was the Speedmaster which came onto the market around the period the moon landing took place (here is our story on how the Speedmaster became the Moonwatch). In 1968 the 145.022-68 took over from the 145.012-68. The 145.022-68 was a bit of a transitional model (more about that model here). While it still had a dial with an applied Omega logo (as seen on all models with caliber 321 before) it was the first model sporting the then new 861 Omega caliber. The model following this transition was the 145.022-69 which I’m wearing this week. 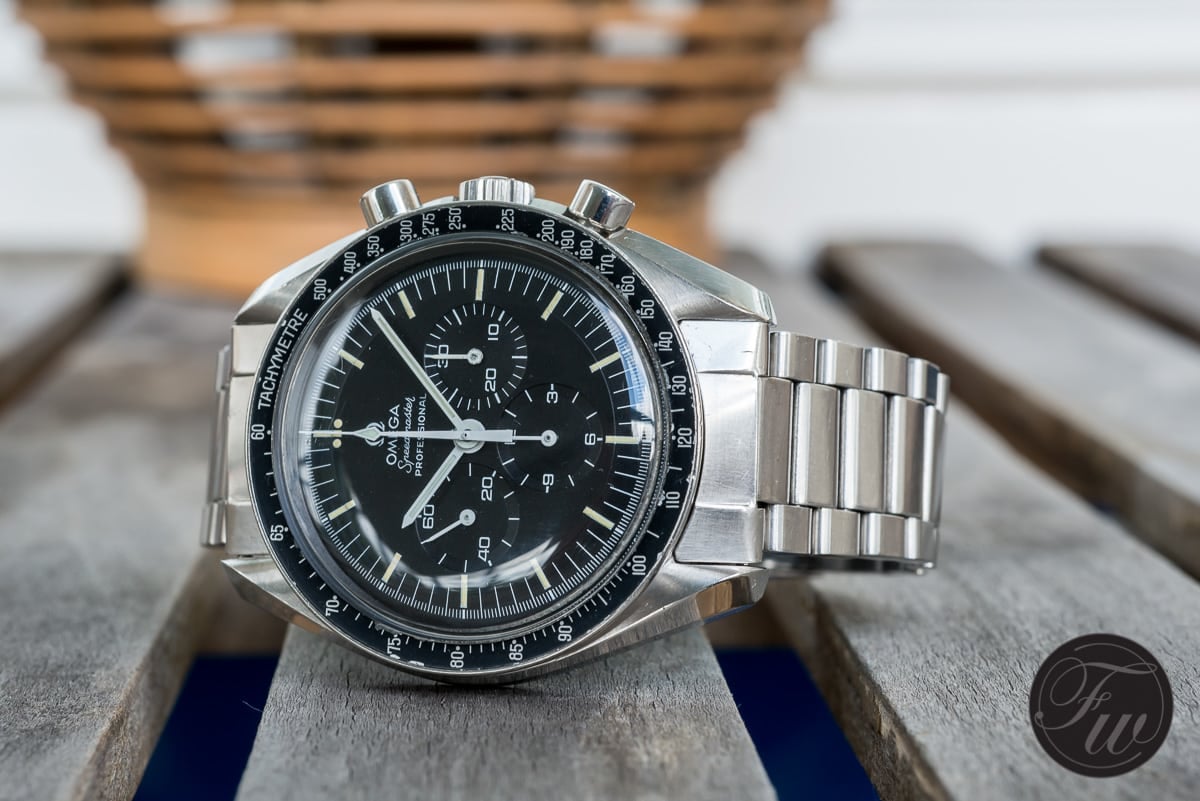 In fact the first Omega Speedmaster Professionals with reference 145.022-69 were Pre-Moon models. Watches produced roughly in the first half of 1969 didn’t benefit from Neil Armstrong wearing his Omega Speedmaster Professional on the moon. As such there wasn’t an allusion on the then produced Omega Speedmasters to this remarkable achievement. These first models of the 145.022-69 had a case back equal to the, pre moon as well, 145.012 and 145.022-68. Just an engraving of the Seahorse logo in the center of the case back, with SPEEDMASTER writen above and the Ω sign below it. 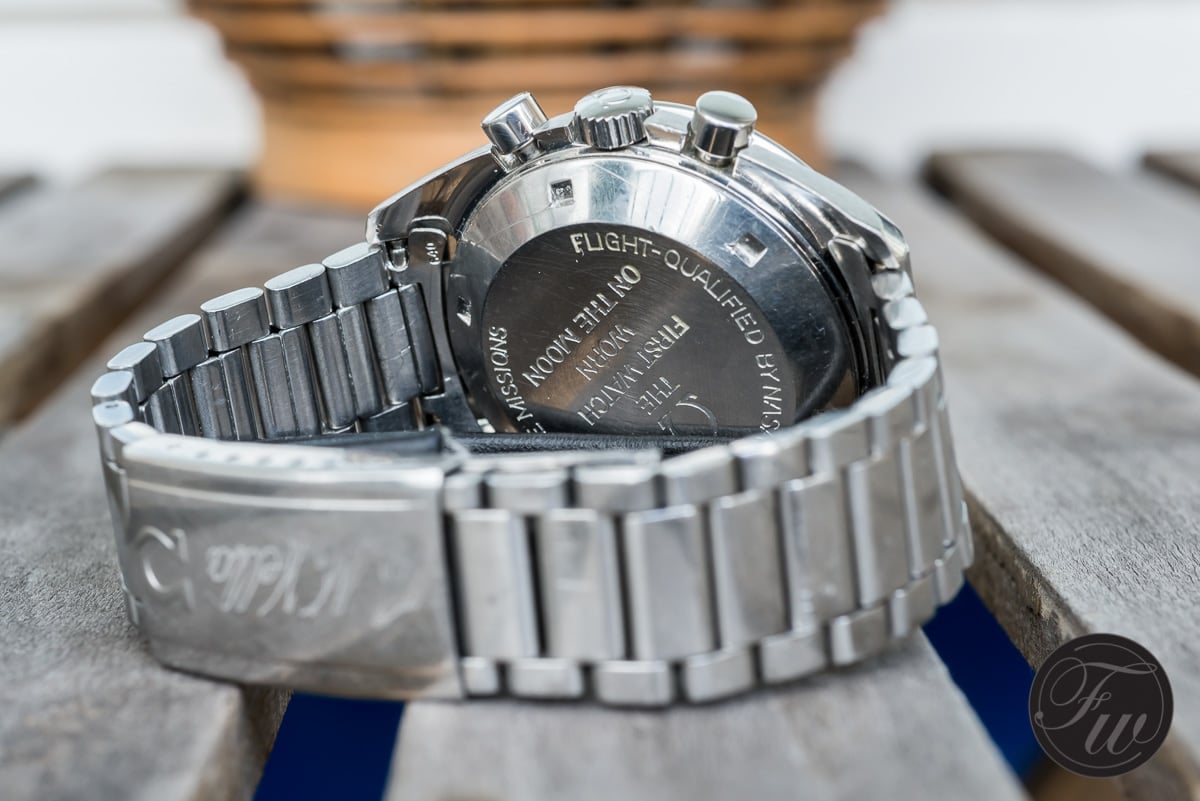 After the moon landing understandingly Omega hurried to make notice of the use and qualification by NASA of their Omega Speedmaster. This was done by an inscription in the case back. In the center of the case back it reads in straight writing “Ω The First Watch Worn On The Moon”. And around this there’s a circular inscription “Flight-Qualified by NASA For All Manned Space Missions”. Everything fully in capitals by the way, however I didn’t want to give the impression that I’m shouting here. 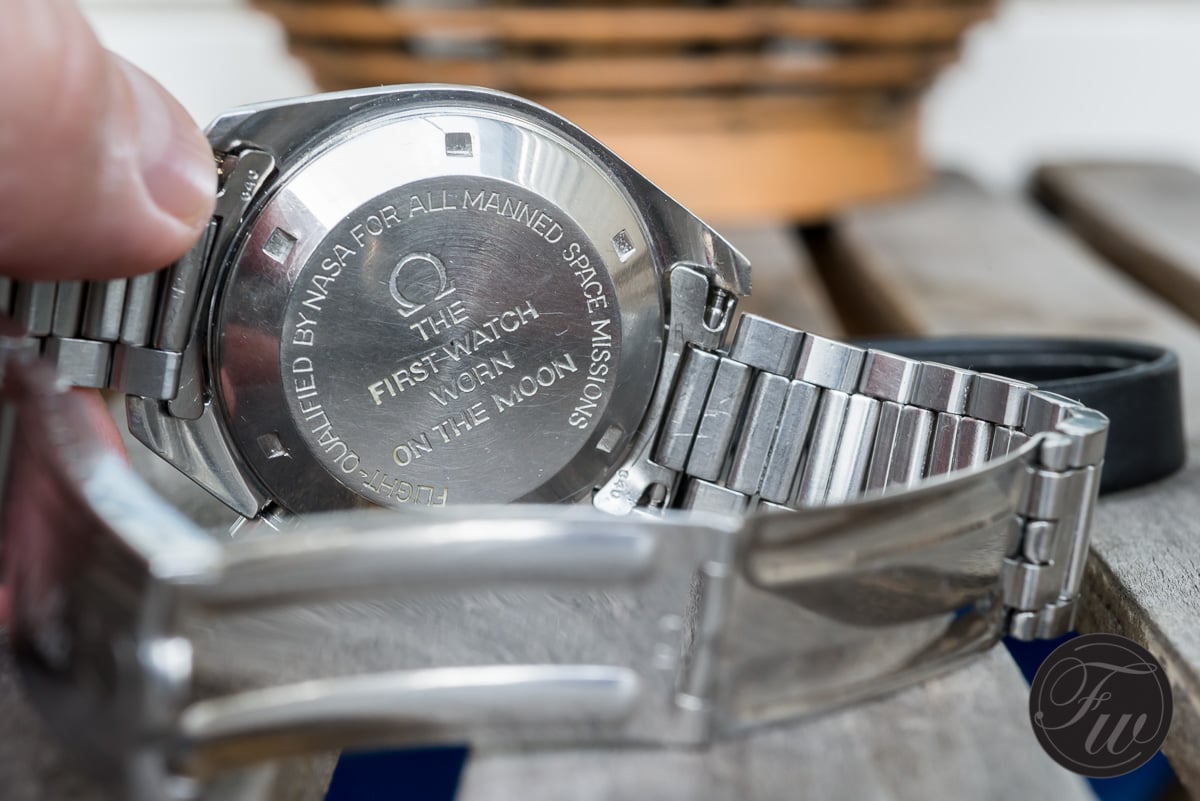 Fumbly for a short period

I really like these case backs. They look kind of old-fashioned or even fumbly, and were only around for a very short period of time. Probably only one-and-a-half year, from the second half of 1969 till Q3 1971. Certainly compared to the case backs with an embossed medaillon surrounded with the same text as mentioned above, which came to the scene in spring 1971. This is the type of case back we still know today and thus has been used for over 45 years now.

To be more complete I like to mention that during the period of the three case back types which I described above, there even were some oddities in between as well. Like the straight-text inscription with 1969 Apollo XI engraving below, or the Non-NASA case back (described here). Browse through our Speedy Tuesday archives to find more information on the different 145.022 executions. 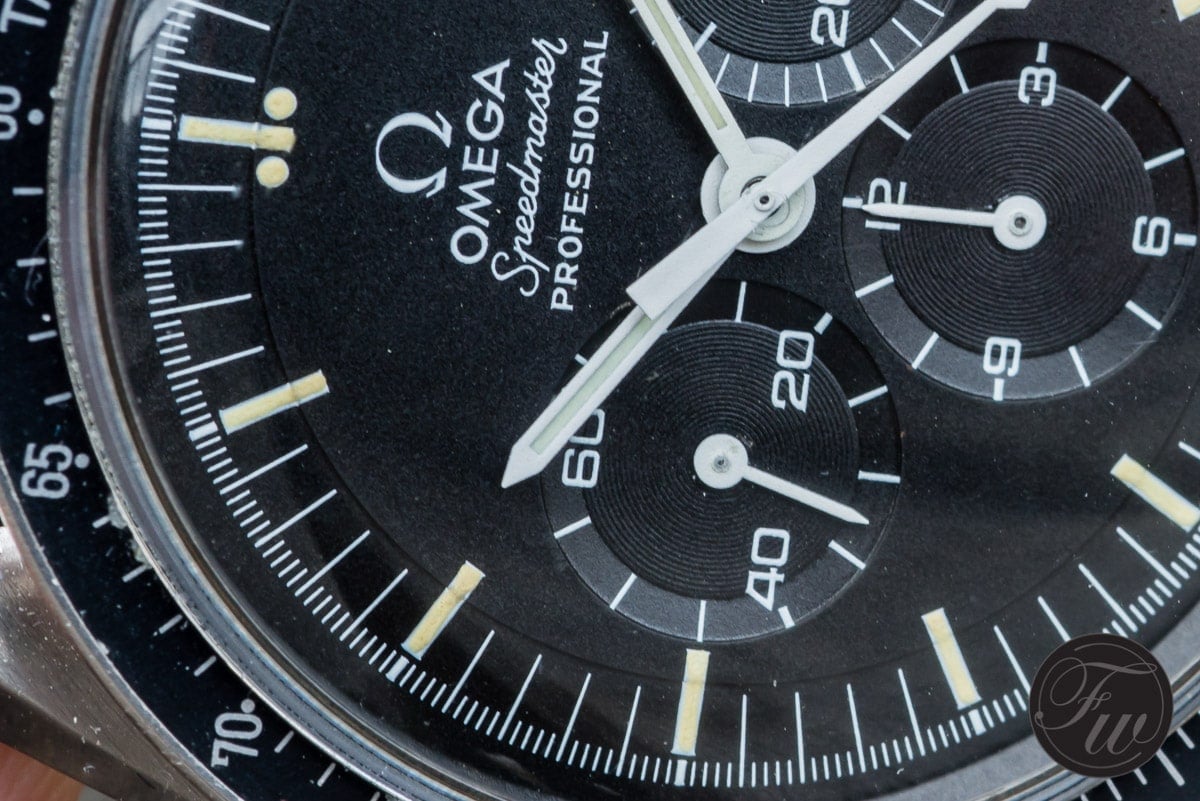 What I like as well about the 145.022-69 is its stepped dial. I.e. the minute track is lowered compared to the rest of the dial. Used since 1960, this stepped dial was abolished with the 145.022-74. Since then we’ve never seen stepped dials in regular Omega Speedmaster Professionals again. Which I think is a pity by the way. What I like about the dial as well is the typography of specifically the S and r in Speedmaster. Determining it from later models. 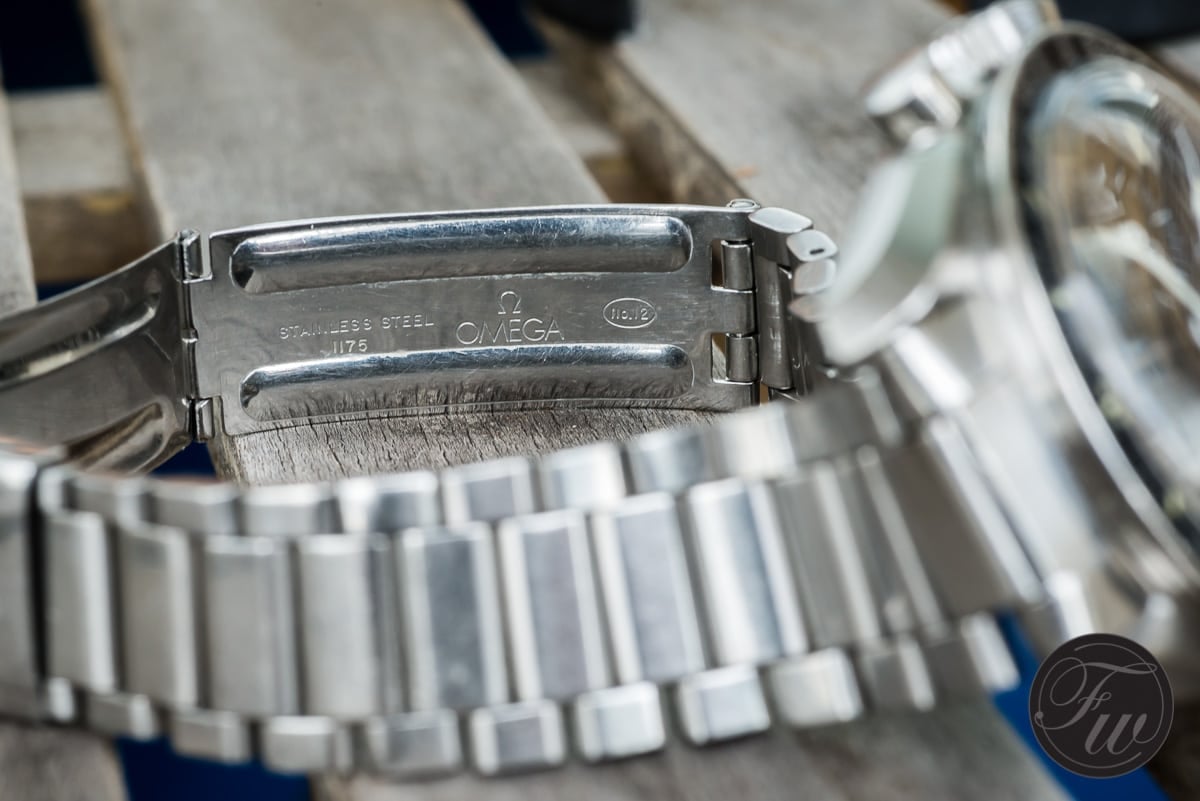 Nothing much to mention about the bezel, except that on my watch it’s a correct so called dot-close-to-70 version. The Omega Speedmaster 145.022-68 can be found supplied with different kind of bracelets. Mine has the known correct reference 1175 with 640 end-links. A rather flimsy bracelet with solid outer links and folded inner links, perfectly reflecting the era. 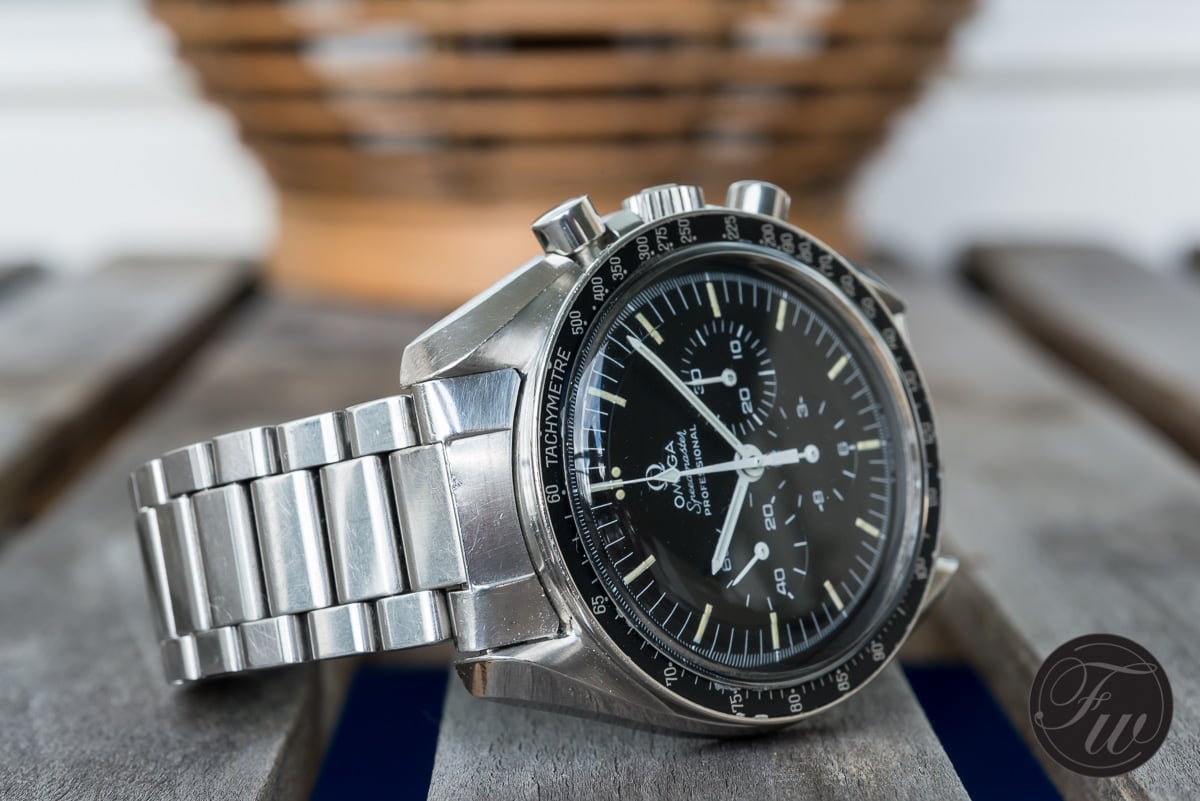 If you’re inspired by this article to obtain a Speedmaster Professional 145.022, or even a 145.022-69 Straight Writing, don’t fail to consult the two Buyers Guides which we did on them, here and here. Expect a genuine Straight Writing 145.022-69 with all correct details and components to set you back at least € 7.000,=. For modern current models of the Omega Speedmaster Professional please head over to www.omegawatches.com.