With this article, I’d like to give you an overview of white dial Speedmaster Professional models. Let me start by saying that the most beautiful white dial version – in my book – is the one that they never produced, a prototype Apollo XIII. However, there are more white dial Speedmaster Professional models that are worth checking-out or considering, if you are out there to add another Speedmaster to your collection. Some of the models mentioned in this article have – officially – a silver or a white gold dial, but I decided to include them anyway. 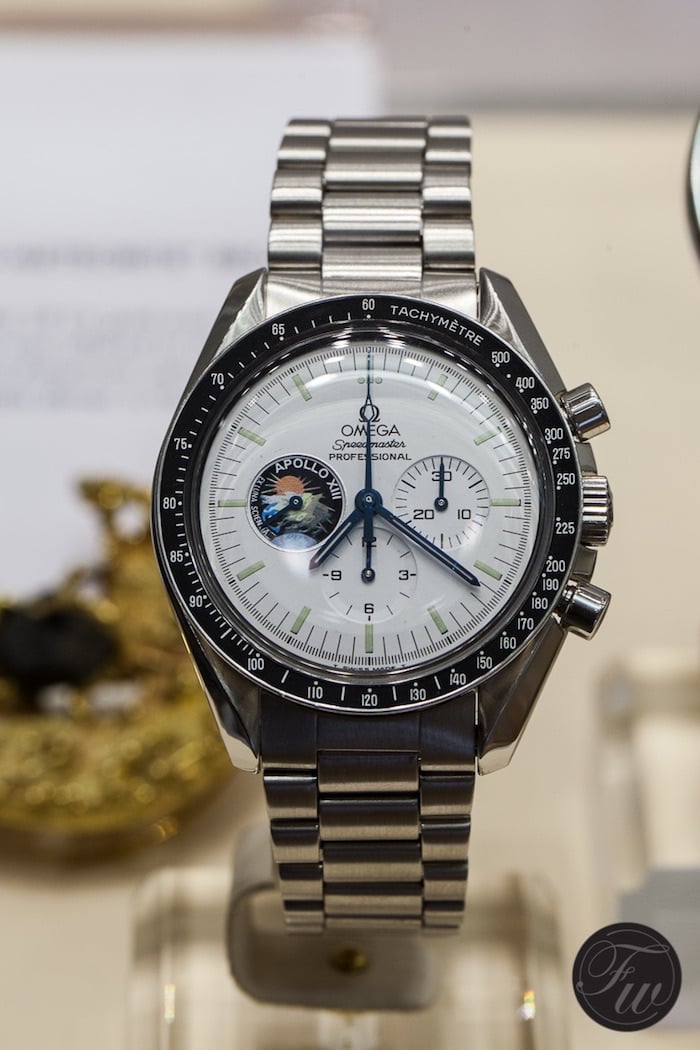 Perhaps the most common white dial Speedmaster Professional models are the ones that Omega did between 1999 and 2005, the Moonphase models (all with caliber 1866 movement). In 1999, Omega introduced the Speedmaster Professional Moonphase in 18ct white gold. It was unnumbered and unofficially it marked the 30th anniversary of the Apollo XI Moon landing, but there was no specific mention about this anywhere. The white gold Speedmaster Pro Moonphase had reference number 3689.30 and came on a leather strap. Somewhat more affordable was the stainless steel version that Omega introduced in 2000. It was actually based on the Speedmaster ’57 Replica (reference 3594.50), with its Broad Arrow hands and white gold bezel, but this Moonphase model had ‘Professional’ on the dial as well. It was available in two flavours, one with blue hands (reference 3575.20) and one with silver hands ( reference 3575.30), below an image of the first reference. You can still find these stainless steel white dial Speedmaster Professional Moonphases for relatively low money on Chrono24 or eBay. 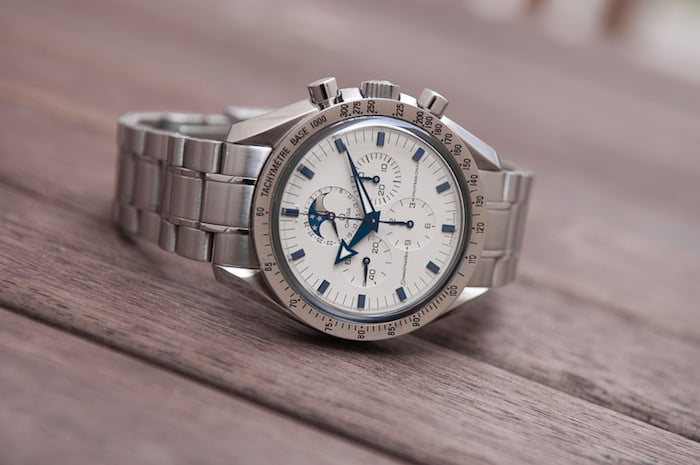 Omega also produced a couple of white gold Speedmaster Professional models, with white gold dials. The first one was introduced in 1980, also referred to as ‘Stafford Speedmaster‘ in 18ct yellow gold. There were only a few available in white gold, either with white gold bracelet or on a leather strap. It was the first Speedmaster series with sapphire caseback and luxury finished movement, caliber 861L. The dial is not really white, but – as mentioned – made of white gold. It is a numbered edition for the Apollo XI anniversary and there are only 20 of them produced. 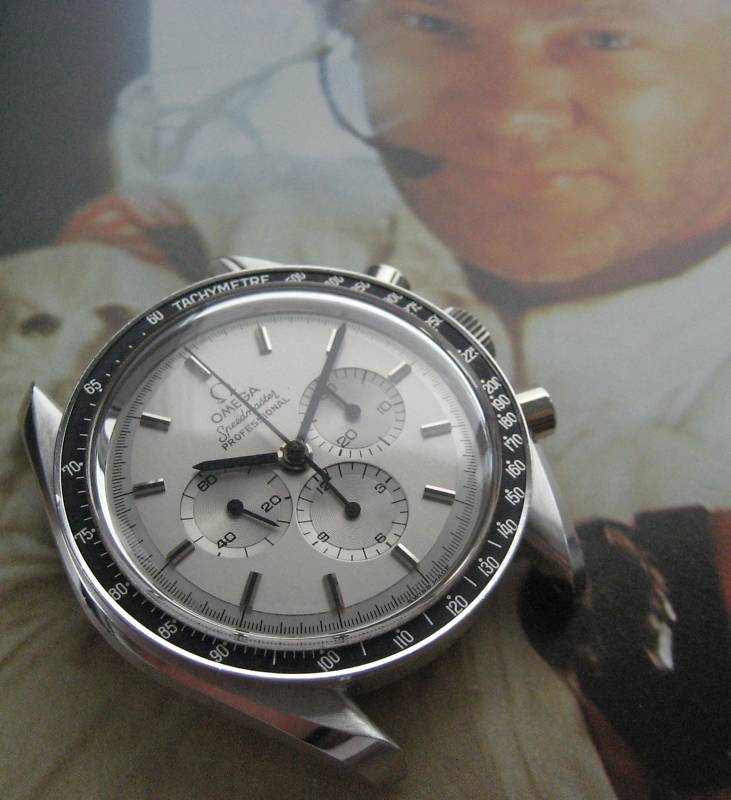 Reference BC345.0802, image from OmegaForums.net

A few years later, in 1994, Omega again released a white gold version to commemorate the Apollo XI Moon landing. This time, the dial was more silvery and had silver colored hands instead of black. Only 500 pieces were made for this limited edition model. An interesting detail is that this particular model (reference 3192.30) came with a caliber 864 movement. This is the chronometer rated version – and rhodium plated – of the caliber 861/863 movement. More details on this white dial Speedmaster Professional 3192.30 can be read here. 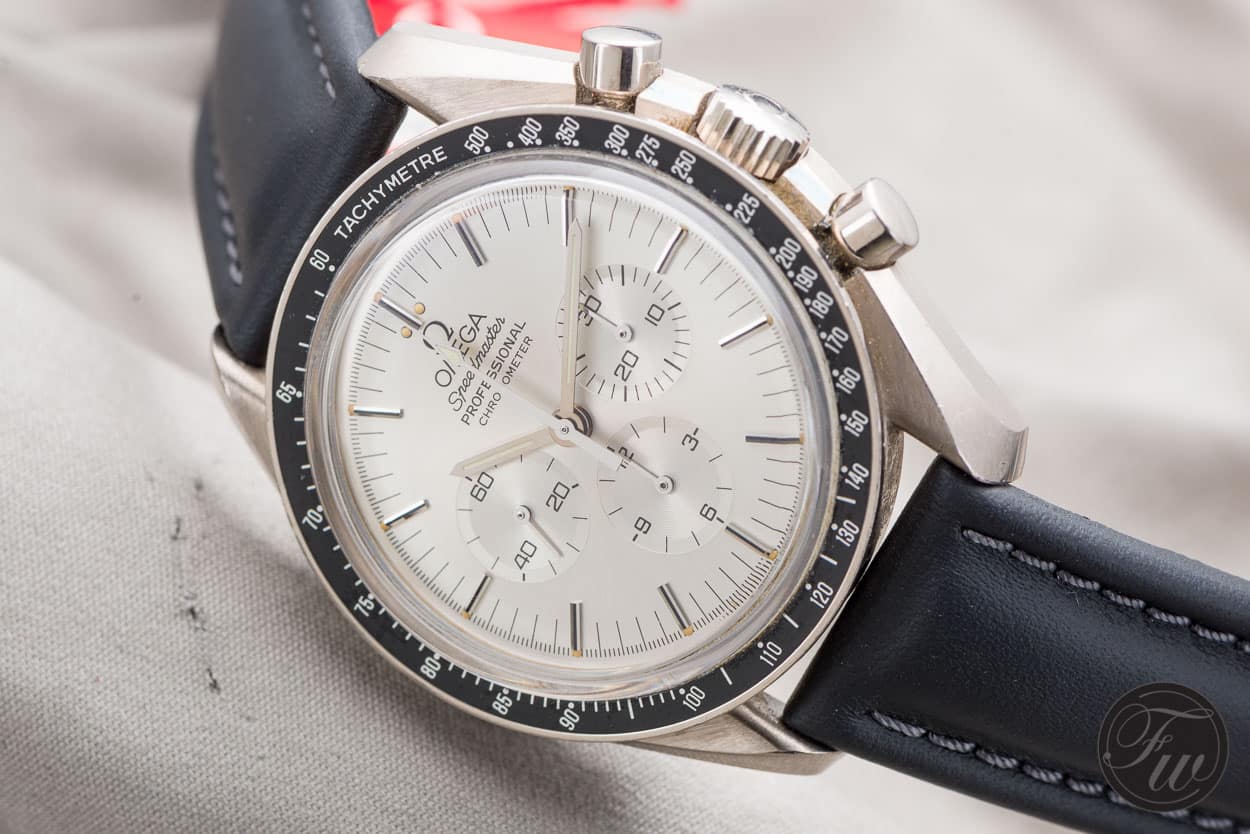 OK, not entirely a white dial Speedmaster but it will do. These watches with white dials and black sub dials are often referred to as ‘Panda’ for obvious reasons. In 2003, Omega introduced the Speedmaster Pro reference 3570.31 with white dial and black sub dials in a production run of only 300 pieces for the Japanese (Tokyo) department store called Mitsukoshi. A year later, in 2004, Omega came up with this Apollo XI 35th Anniversary edition – limited to 3500 pieces only – with an almost identical dial. There was a lively trade in spare dials of the Mitsukoshi on eBay at some point, so people could make their own ‘version’ in combination with the silvered set of hands, but the original 2003 model with only 300 pieces is long sold out and you rarely come across one for sale. The Apollo XI 35th anniversary edition Speedmaster Professional reference 3569.31 is for sale once in a while on eBay, Chrono24 or during auctions. Prices are well over €4000 Euro these days. 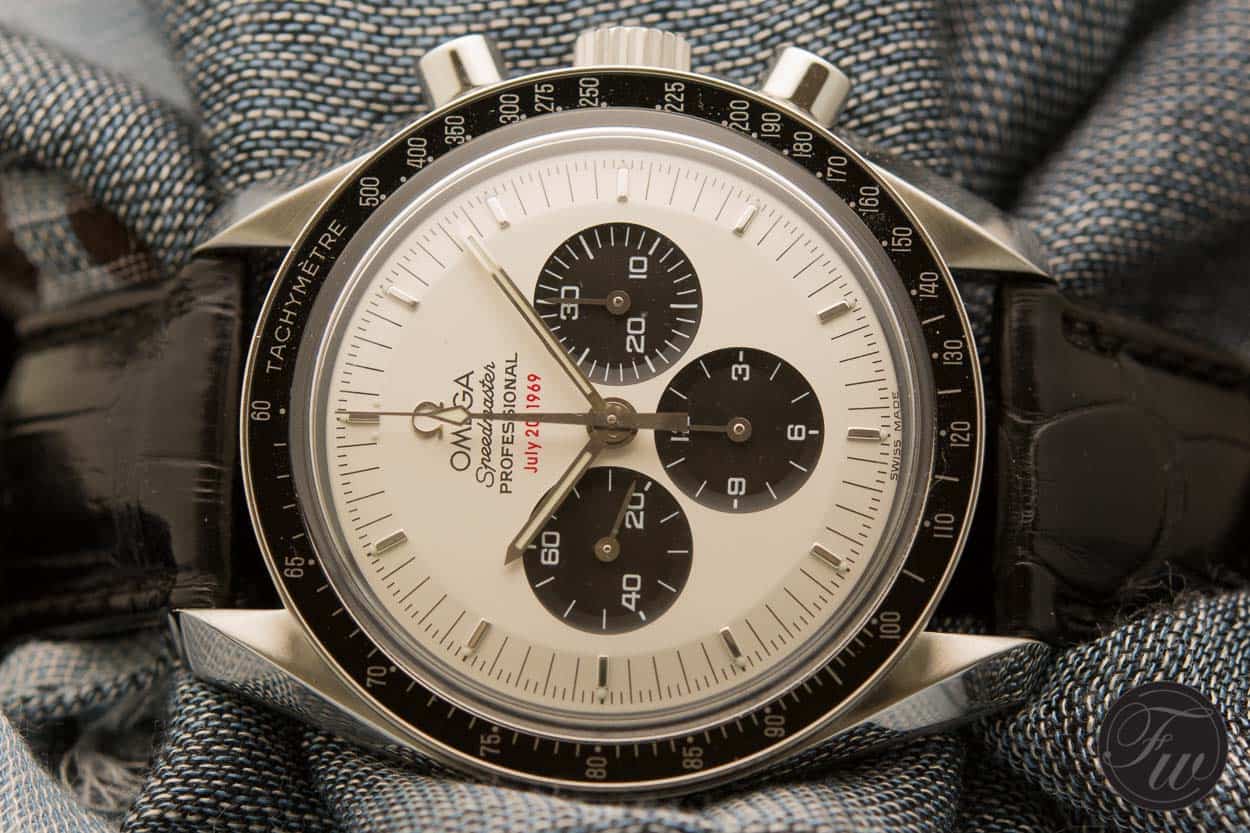 One of the more recent white dial Speedmaster Professional watches is this Alaska Project reference 311.32.42.30.04.001. Limited to 1970 models and came in a special box with extra long white strap and a red aluminum case. It refers to one of the prototype Alaska project watches that Omega developed in 1970 for NASA, a watch that was more resistant to extreme changes in temperature than the version NASA had been using till then. NASA never used these white dial models and thus they were kept in their archives. There are a couple of versions displayed in the museum these days (click here for our Omega museum photo report). In 2008, Omega introduced this white dial version and although not extremely popular at the time of its introduction (they were with dealers and boutique for many years after), it becomes more difficult to find one these days as their popularity increased. There is currently only one for sale on Chrono24, well over €5000 Euro. 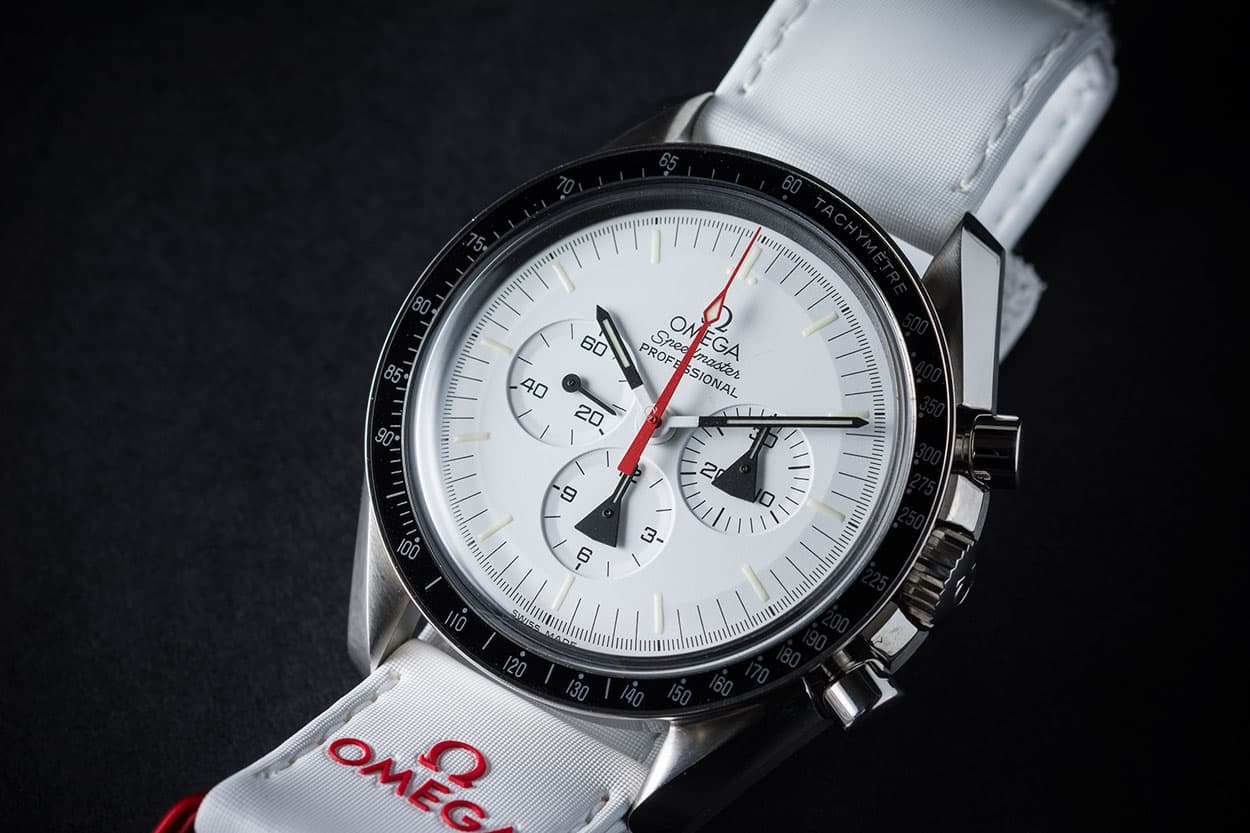 Some countries have all the luck and have Speedmaster watches created especially for these markets. Italy and Germany are probably the countries with most ‘special deliveries’ for their market. One of them is this white dial Speedmaster that dates back to the 1980s. Little is known about it, as it is unnumbered and Moonwatch Only mentions (we’ve heard this story as well from the Omega Museum) that it was done per request by a German retailer/distributor. The caseback has DD 145.0022 engraved, a reference that was more often used for bi-color models. This particular German market Speedmaster has a white dial with gold accents as well as a gold bezel. We covered this specific watch in more detail in this article here. 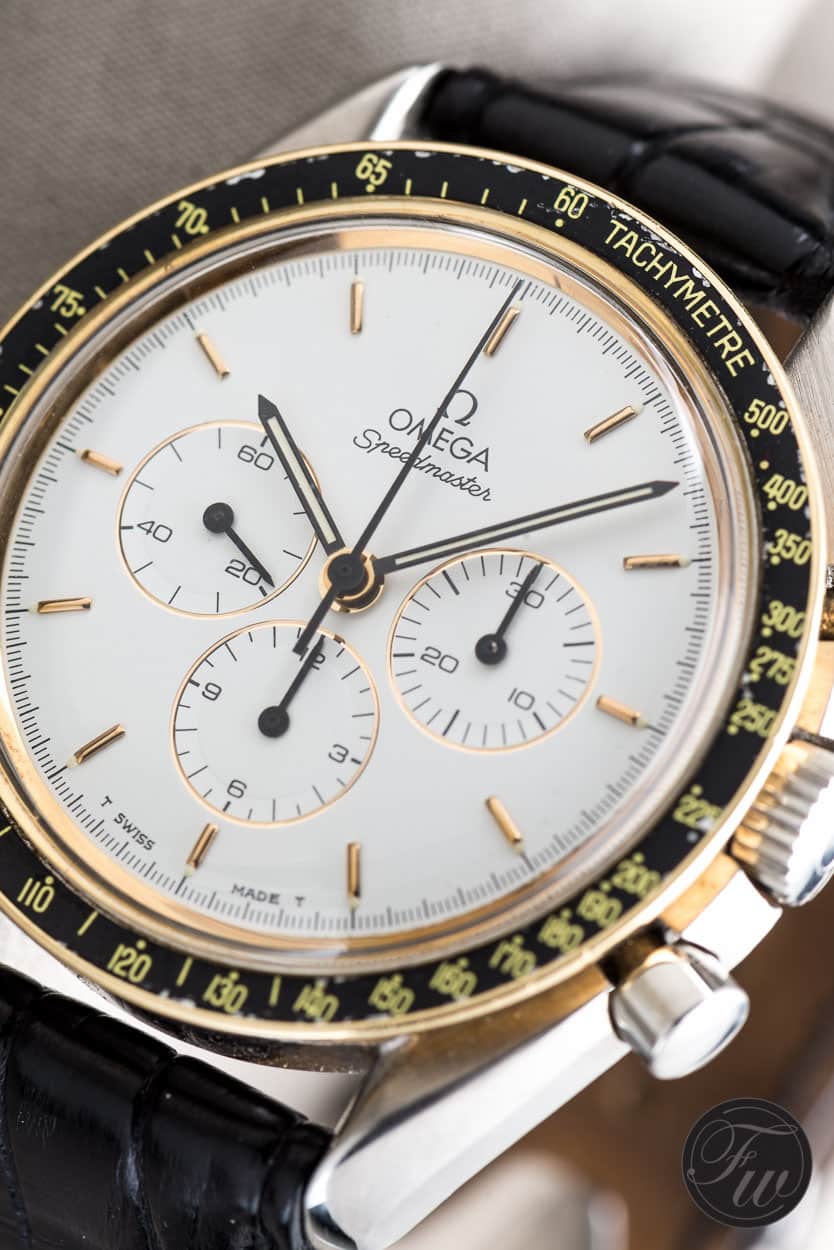 Another interesting country-specific model is the 1997 reference 3593.20 Speedmaster Professional with white dial. A numbered series of 500 pieces only, especially for the Italian market. This bianco Italiano is a rare find. Our friends of the Roy & Sacha Davidoff boutique in Geneve showed one recently, see below. It was introduced as a 40th anniversary model of the Speedmaster (1957 – 1997) and came with the sapphire caseback that unveils the caliber 1863 movement. 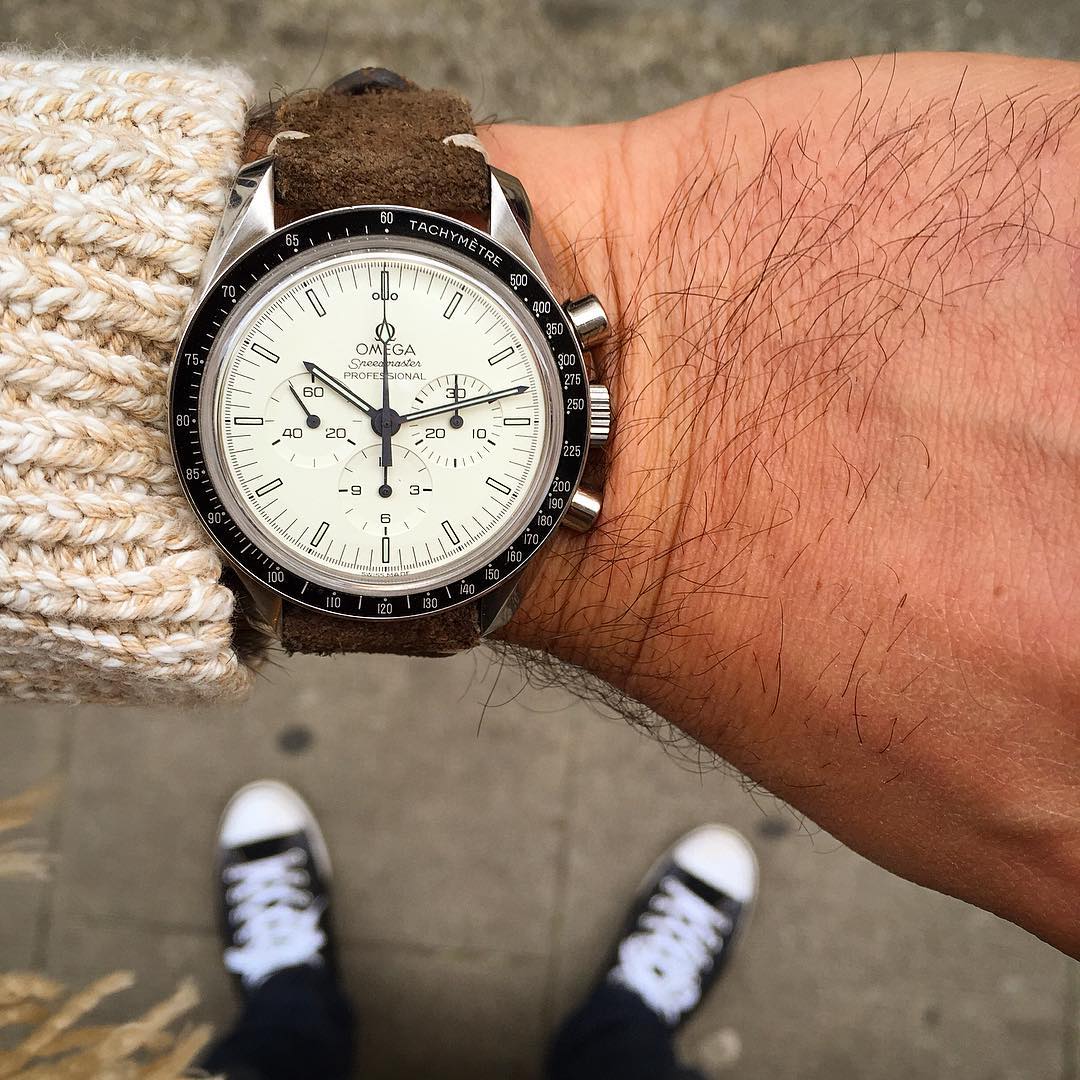 Last but not least and perhaps the most talked about modern Speedmaster of last year is the Silver Snoopy Award model with white dial and enamel caseback with sterling silver Snoopy medallion. It was sold out before it hit the stores and market prices currently run up to €15.000 Euro. And that’s not only what’s being asked, it is also what’s being paid these days. The sad part is that a lot of retailers and boutiques delivered it to gray market dealers and other people wanting to make a quick buck, while real collectors weren’t even able to order one at list price (including some of our team). Long waiting lists are still not fulfilled yet, rumor is that it will take to June to have all 1970 pieces delivered. This Speedmaster Professional reference 311.32.42.30.04.003 is discussed and reviewed in detail here. 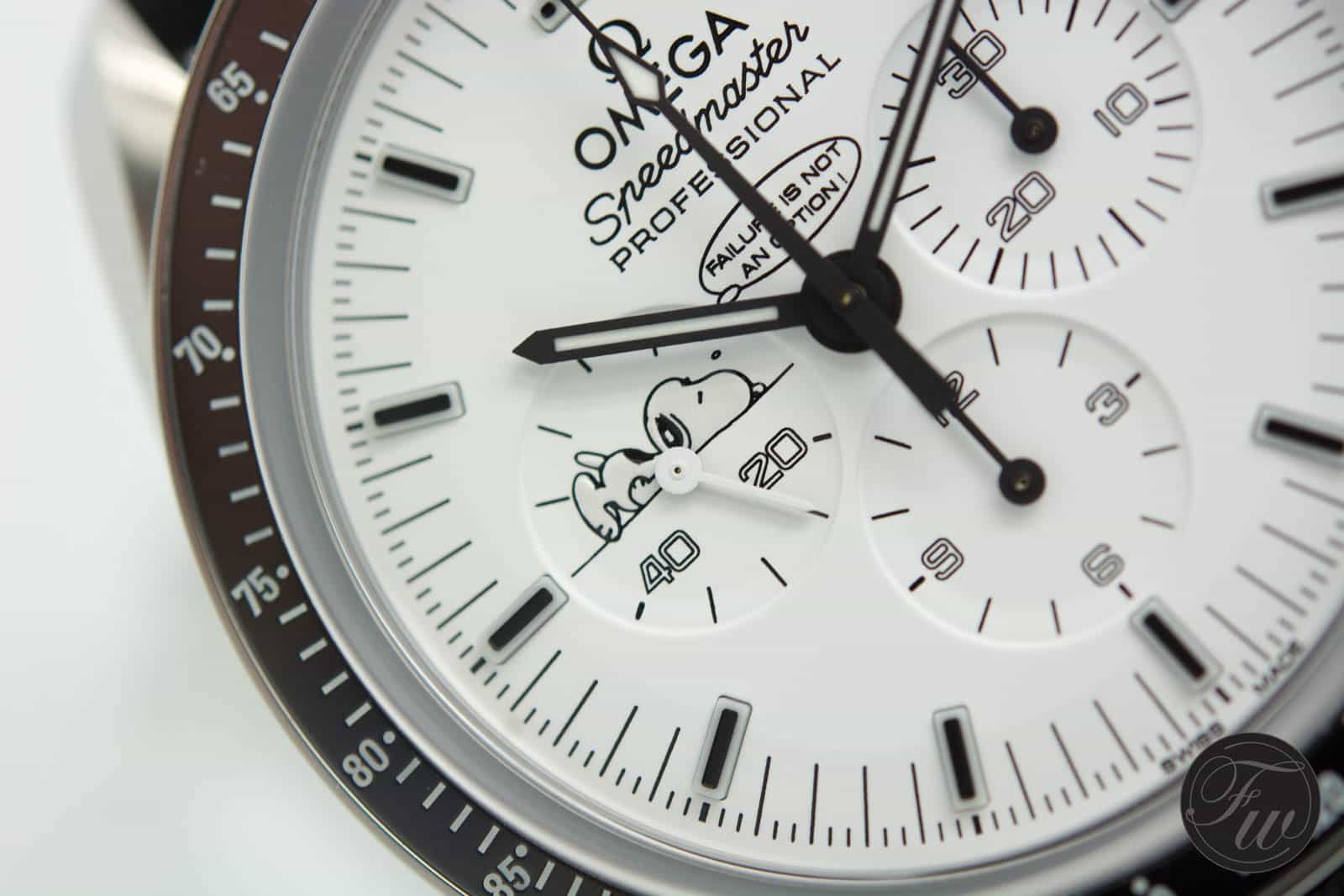 Thanks to Christopher Beccan of Bexsonn.com for the masthead image.