#TBT Flying Around With An Outstanding Jardur Bezelmeter Chronograph

If you have a Navitimer, you need a Bezelmeter too
Tomas Rosputinsky
comments 1
Share

Jardur never reached the level of fame that Longines and Breitling did. That’s probably the reason that the brand often stays under collectors’ radar. Yet, the black-dialed Jardur Bezelmeter with genuine red markings is one of the most intriguing and attractive vintage chronographs for me.

I will never be a pilot. That means I’ll never use my Jardur Bezelmeter for its intended purpose. The closest it gets to real use is when I sit on a plane and take it for a business trip abroad. This week, I am in London, so I thought it would be a perfect opportunity to take the Bezelmeter up to the sky and show it to you on this week’s #TBT. 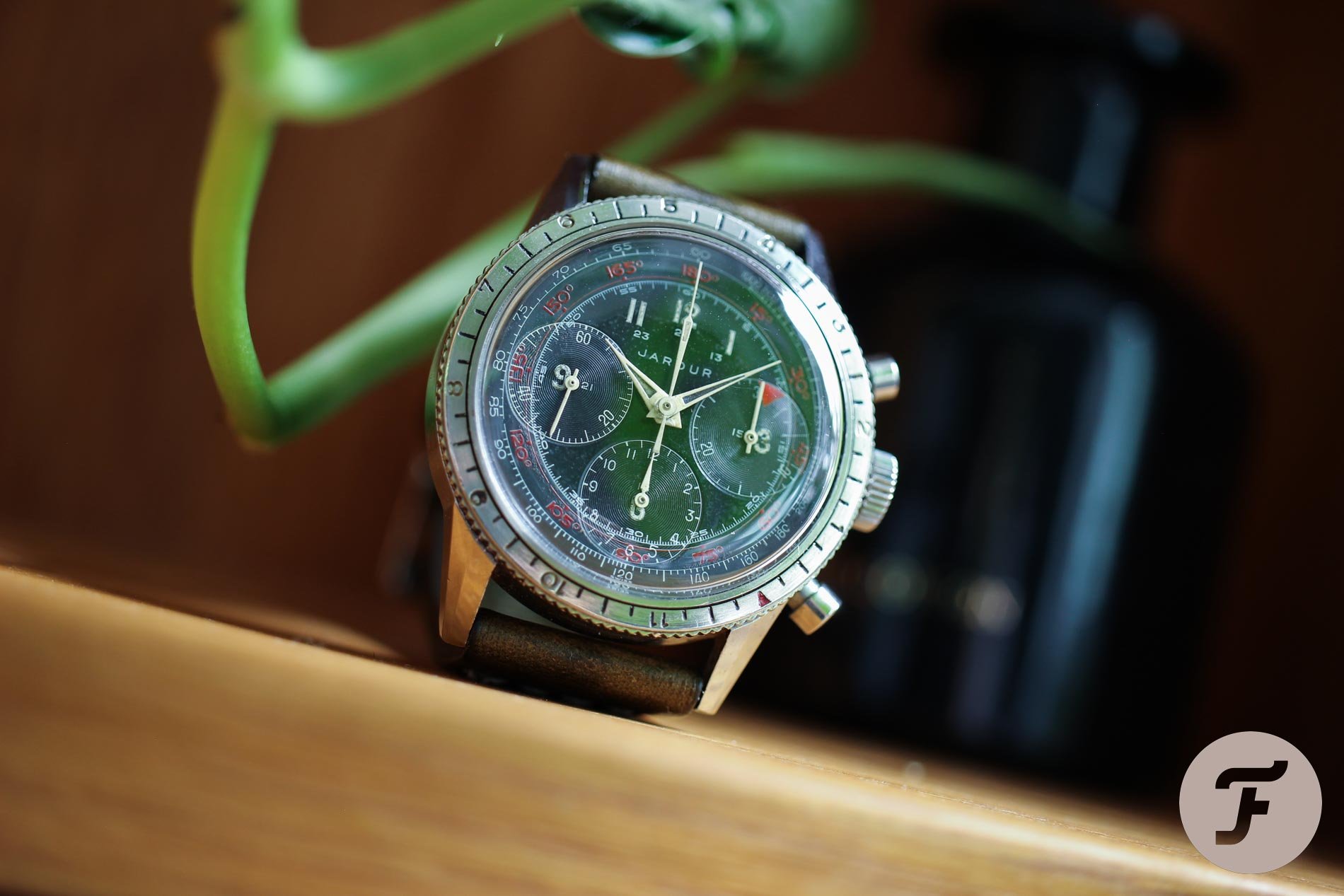 Red printing on a dial is always a juicy detail. Usually, when it comes to chronographs, it doesn’t just serve a purpose, but it also brings life and fresh energy to the dial. Most of the time, you will find it on bright-dialed watches like the Gallet Yachting or Decimal. It’s the red printing that makes my Sinn bloody hot! Jardur used red detailing over a completely black dial in a way that resulted in a unique watch sub-genre.

Between the white minute track and the white tachymeter, there is another fairly big and unusual scale. It’s marked with beefy, rich red numerals in the positions where you would expect hour markings. But instead of hours labeled 1–12, you will find marking up to 180° in 15° increments every five seconds. Why does such an unusual scale get such a prominent position? 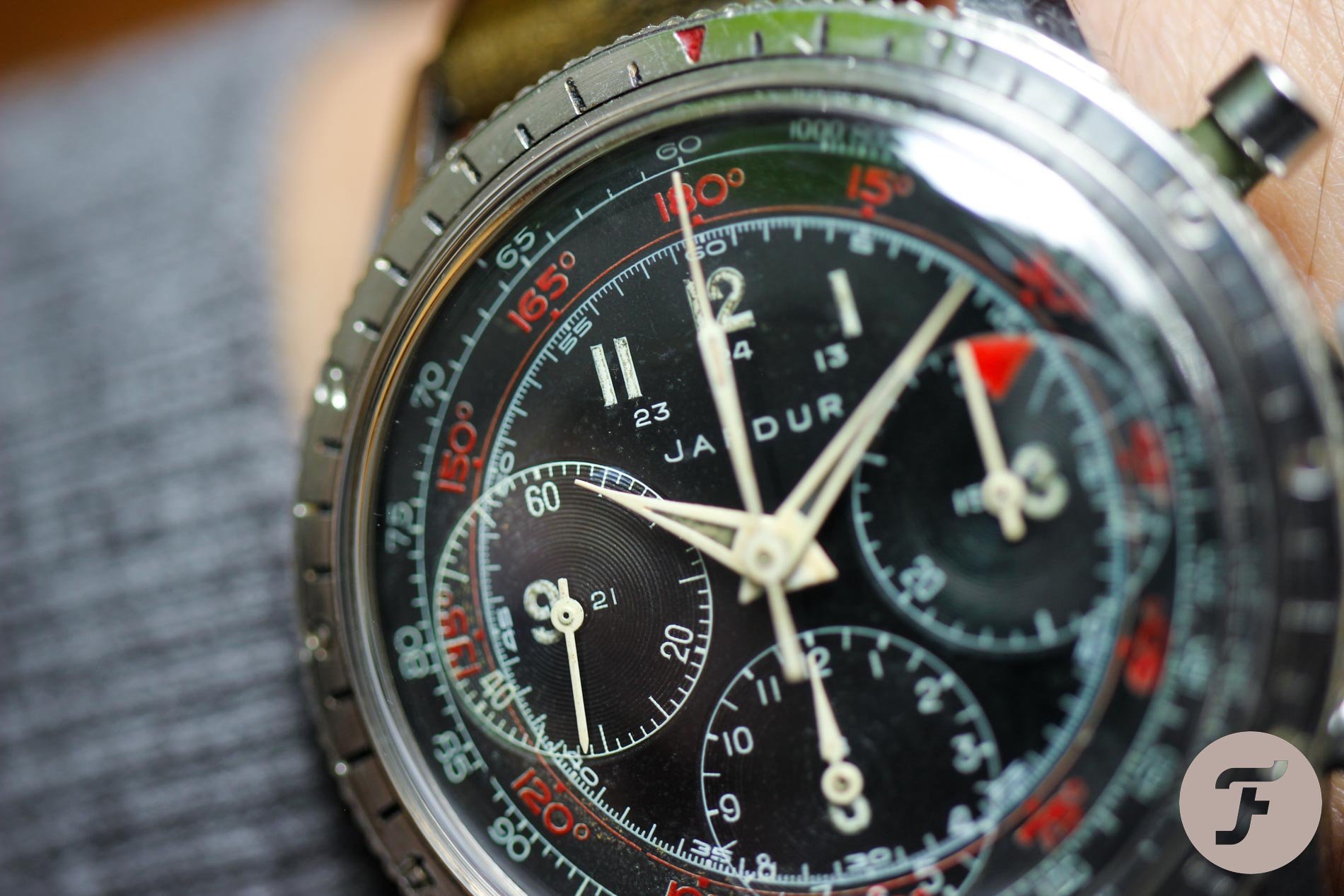 Jardur was known as a company that produced various accessories for aviation and flight instruments, including flight calculators, navigation plotters, and protractors. The idea behind the “degreemeter” scale was for a pilot to use it with the chronograph to calculate turns. It was calibrated to a standard turn rate of 3° per second. If the pilot wanted to make a 90° turn and activate his chronograph at the beginning, he just had to look carefully at his wrist. At 3° per second, the pilot would reach 90° right after the central chronograph hand passed the 30-second mark. 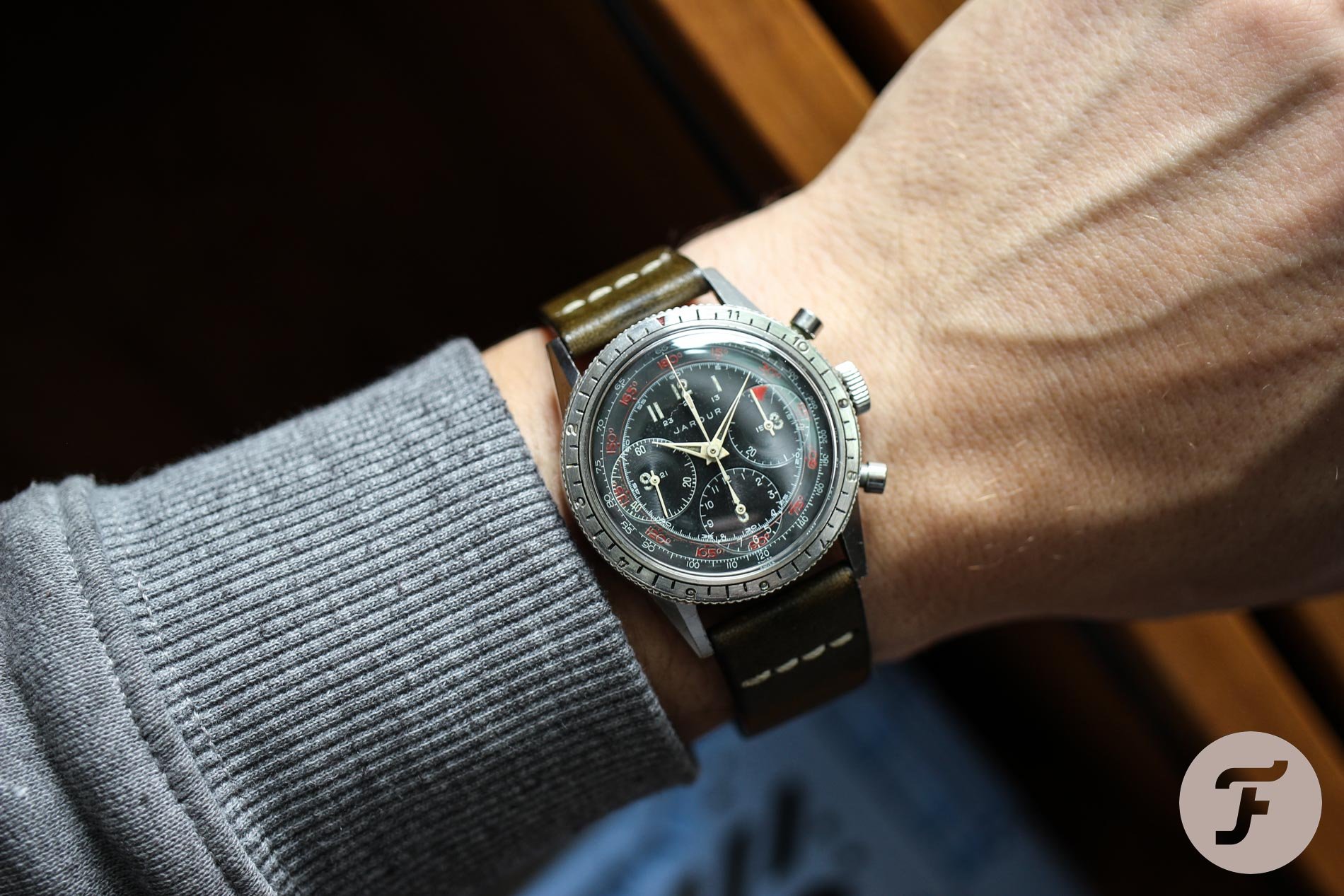 You probably also noticed a big red triangle unusually placed in the minutes sub-register. It spans over two minutes, which was just about the time necessary to complete a 360° turn. If you look at this page, you can see various dial execution of the Jardur Bezelmeter. It’s pretty fascinating to see how wildly Jardur experimented with the two-minute highlighter. Besides the big red triangles, there were also convex kite-shaped markers or a pair of miniature triangles for the first two minutes.

The Jardur chronograph was never officially commissioned for any military division, but many aviators and military personnel bought it during their military service through the Navy Post Exchanges (PX). When I finally received the modest Jardur history book that I found on Amazon, I was surprised to learn how many documented stories there are about pilots wearing the Jardur Bezelmeter. Besides the Boeing B-17 Flying Fortress heavy bomber pilot, you can find a Jardur that belonged to the famous James Harold Doolittle, “an American military general and aviation pioneer who received the Medal of Honor for his daring raid on Japan during World War II.” The fun fact that Robert De Niro wore one in the 1998 film Ronin is almost irrelevant compared to the real WWII heroes. 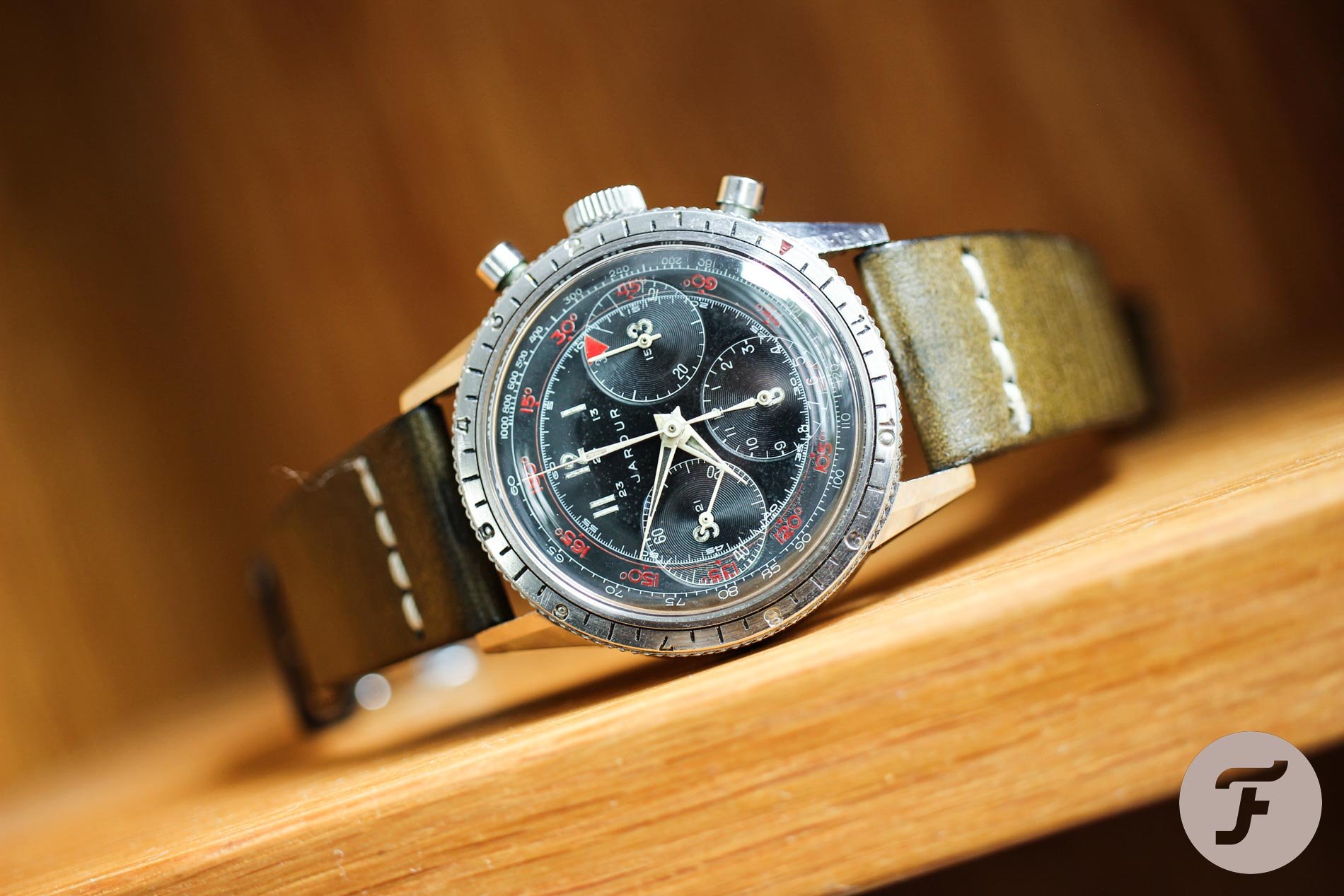 Back to the watch

For me, the Jardur Bezelmeter is at least as individualistic as the Breitling Navitimer. The dial design is so specific that it is almost impossible to confuse it with any other watch. So too are the hands. When it comes to the Bezelmeter, the so-called cathedral hands with a majestic, heavily lumed central chronograph hand are probably the most desirable. For me, though, they were always a bit too “cathedral-like”, if you know what I mean. I preferred the simple, triangular, perfectly legible hands with a simplified central chronograph hand. They have a modern touch that makes the Jardur Bezelmeter almost a contemporary watch in my eyes. And this particular handset is harder to find. There is one currently listed on eBay, so you’d better hurry up. 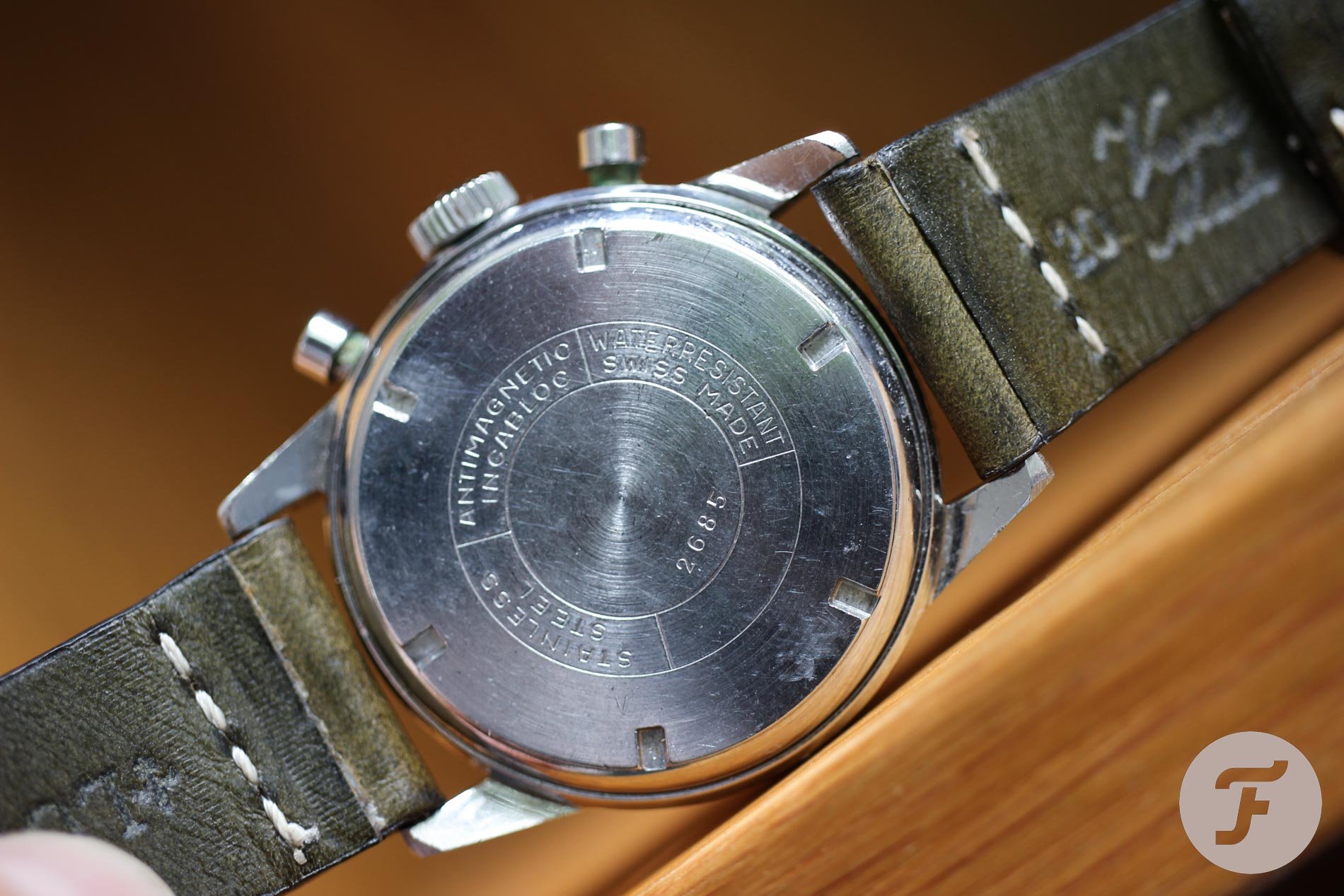 Most of the Jardur chronographs have a “Pilgrim Electric Corp.” signature on a bridge of their workhorse Valjoux 72 movement. This might sound strange, but it’s totally correct. It links back to the mid-’30s when the company specialized in selling radio receptors and supplying people who needed vacuum tube testers, radio analyzers, or communicating receivers. 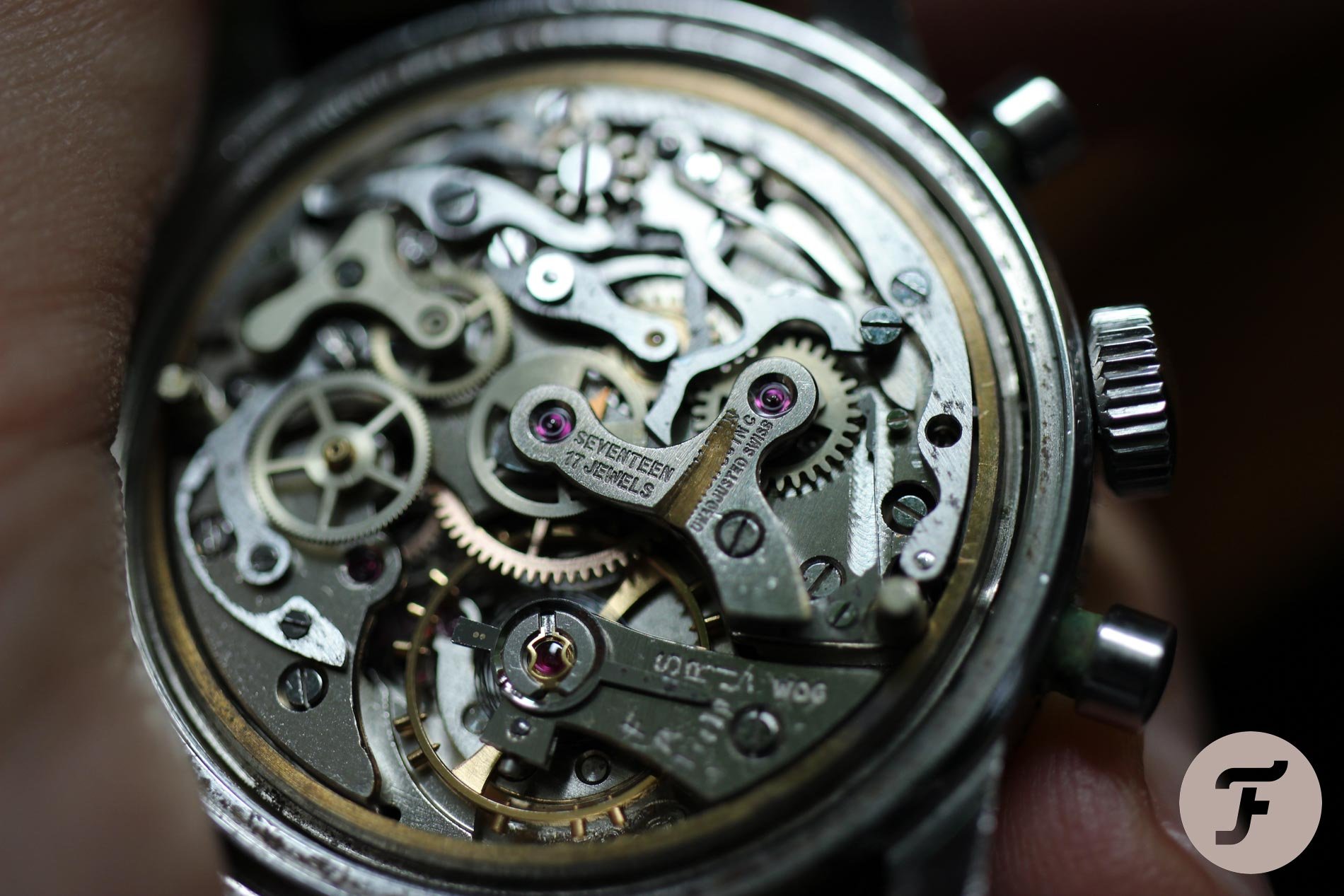 What really sets off all the “beware alarms” is a movement with a struck-off name on that bridge and the inner case back. The original inscription is hard to decode but only until you notice the WOG import code that belonged to Wakmann. Pilgrim Electronics couldn’t import a watch with a WOG-marked movement. The company had to do so using its own code.

So the only explanations are that it’s a “Frankenwatch” mishmash or that Jardur manufactured it like that with movements that were imported to the US beforehand. It may seem like a stretch, but I believe that my example is original. Why? 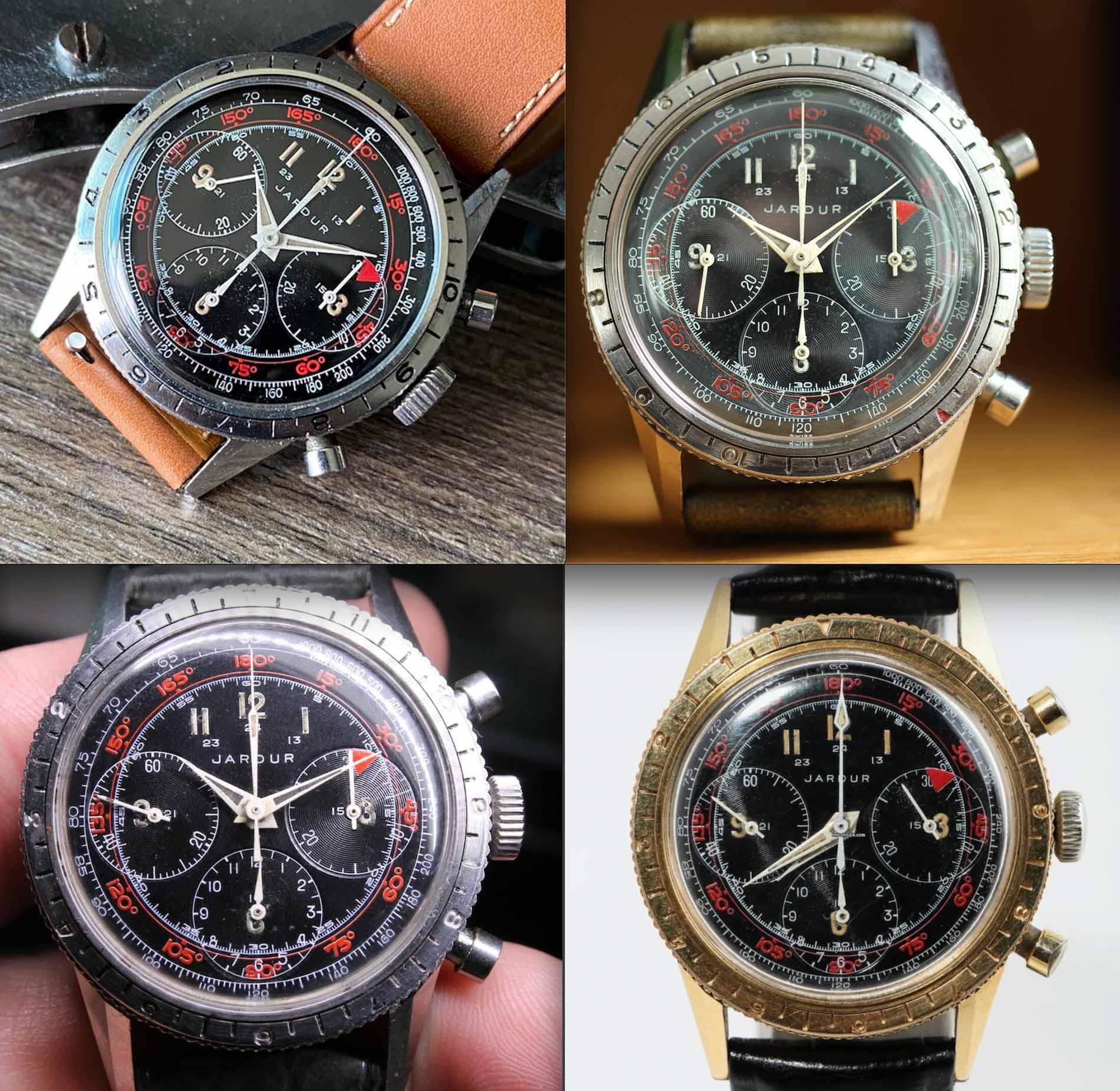 Too many consistent examples

If mine was the only Jardur Bezelmeter like that, I would lean toward it being a Frankenwatch. But there are at least four other WOG-marked Bezelmeters with movements like this, and they all have the same hour/minute hands that you see on mine. What makes me believe that dials and hands came like that is the fact they are all way different but consistently aged. It seems unrealistic to put such a set together for four watches. If I saw cathedral hands and struck-off movement, that would be suspicious. And who would sacrifice four Valjoux 72 movements to create watches of similar value? Well, enough theories. Make up your own mind and feel free to chip in with your thoughts or research findings in the comments. Constant exploration is part of this amazing hobby. 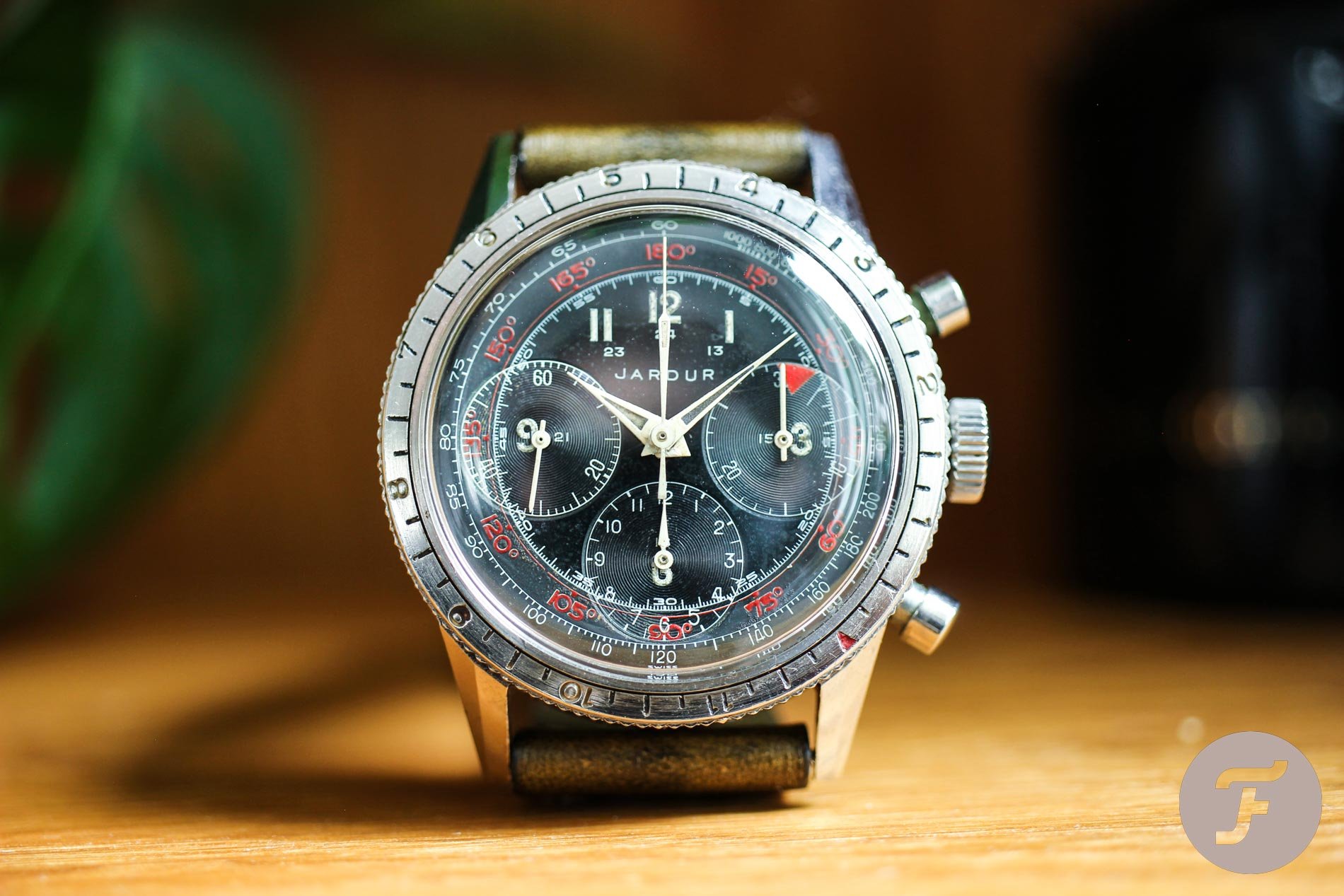 Last thoughts on the Bezelmeter

It has a unique history, and its link to aviation is stronger than some other brands that claim such a thing. The Bezelmeter was not a result of fashion, style, art, or marketing. Rather, it was a result of the effort that Jardur made to improve aviation tools. The watch was recognized by dozens of pilots and documented with real WWII hero stories. It wears comfortably, it has fine movement, and its design grabs attention. It’s rich in details, it’s original, and I dare say that you’ll hardly ever get bored with it. Happy hunting!