I asked RJ the other day if he wouldn’t mind putting the newly released Oris Divers Sixty-Five Limited Edition into an uncensored face-to-face “battle” with the original Oris Star. “Go ahead,” he said. Well, RJ, here we are!

In all honesty, this is probably the most irrelevant story of the year. The reason is pretty prosaic: the Divers Sixty-Five Fratello Limited Edition and its predecessor were never meant to be compared. I just found the idea of comparing them amusing. The new release was inspired by the original, but it was never intended to be an exact copy. It’s a watch with its own identity. RJ already explained in the introduction video that we made it 4mm bigger. Simply take this as an invitation to my experiment on comparing the incomparable. 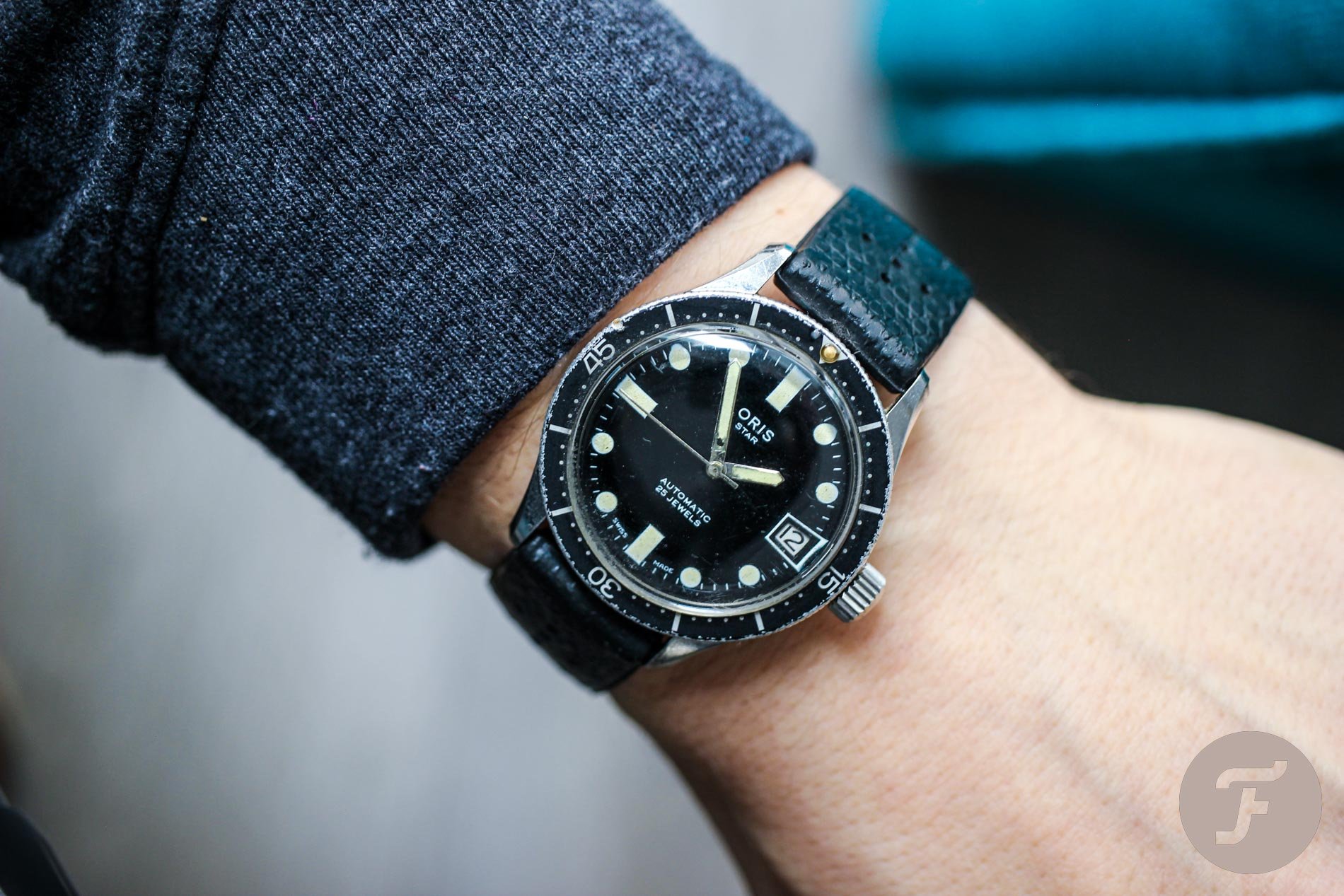 I couldn’t help it

I found myself to be one of very few (I believe) that happen to have both watches side by side. My nerdy vintage spirit had me inspecting and comparing them closely. From the perspective of what the Divers Sixty-Five Fratello Limited Edition is, the comparison is unnecessary, but I believe it will result in an amusing and perhaps surprising read. Anyway, there is one good reason for doing it: the direct comparison allows us to pinpoint and focus on details that otherwise might be easily overlooked. 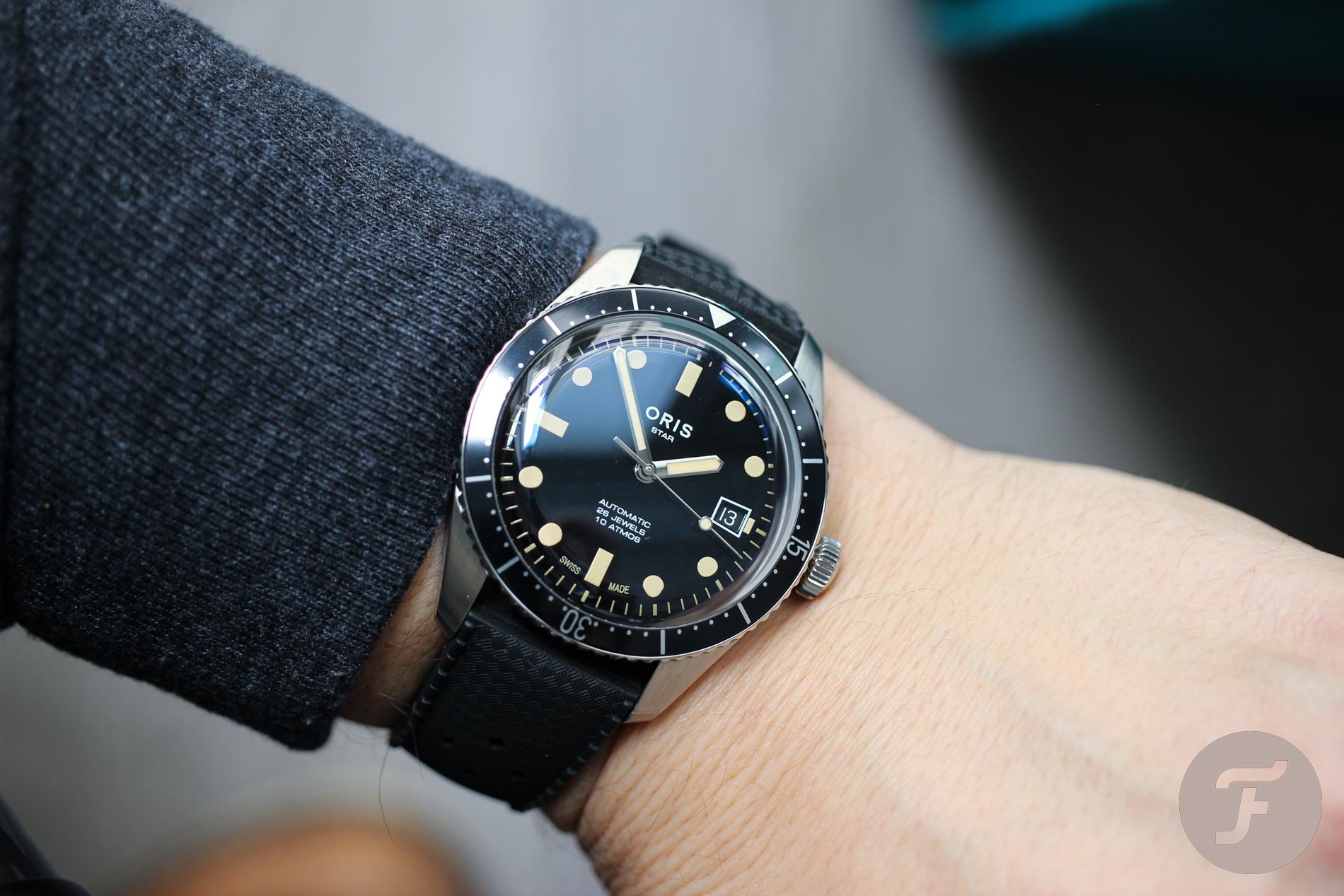 Let’s get back to the diameter. If I’d had a veto, I would’ve probably opted for a 38mm or 39mm case. It’s probably more sensational than rational, but 40mm sounded too big for me. Keep in mind that I am the kind of guy who feels pretty proud wearing 36mm dive watches. That’s why the spec sheet with the 40mm case left my shopping list without an update. 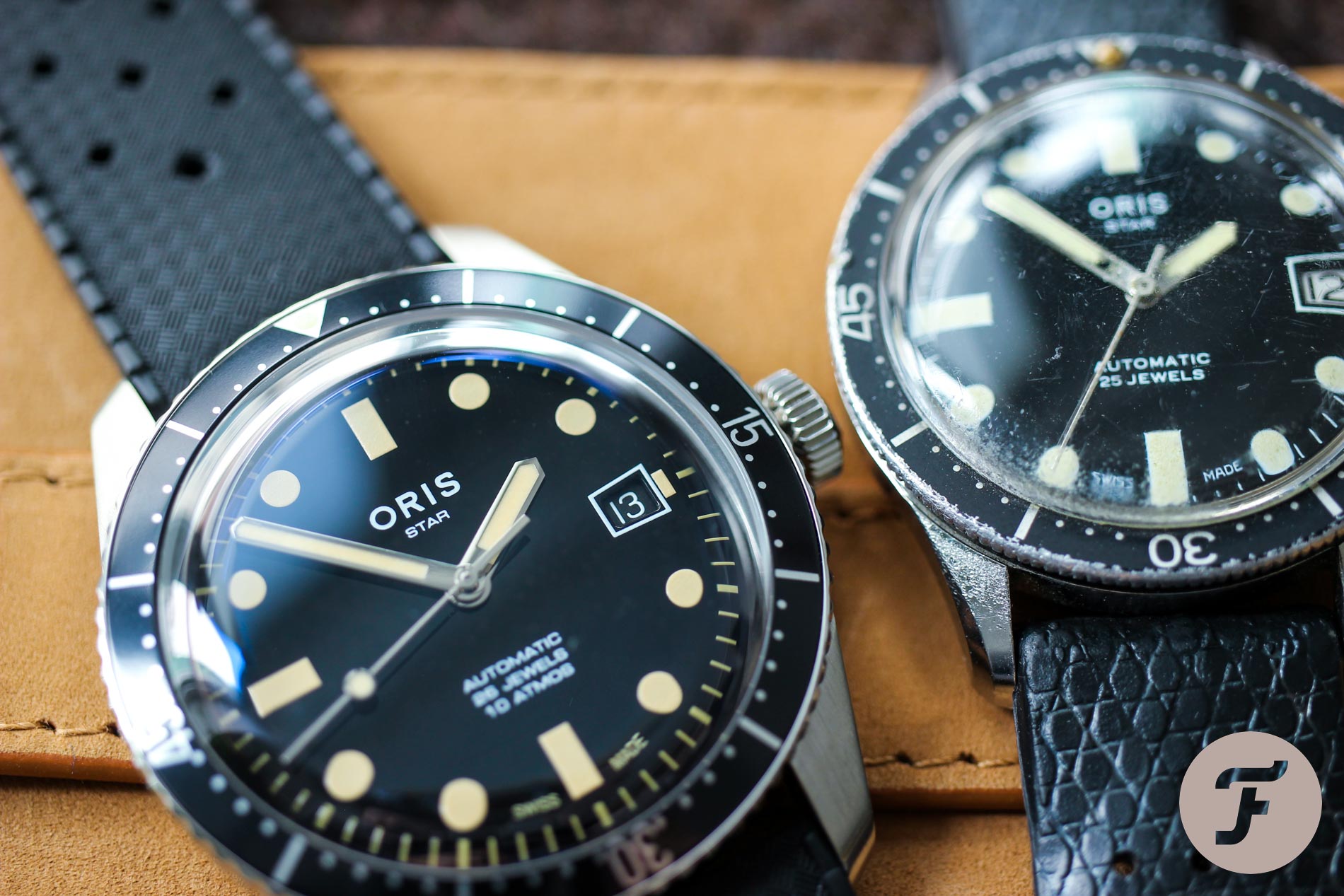 All that changed when I saw the first wrist shots. I was surprised that it didn’t look that big at all! It had eaten at my mind for so long at that point that I decided to get one too. Currently, I am wearing the OG on my right wrist and the new release on my left wrist. Four millimeters is quite a difference, but honestly, the Divers Sixty-Five Fratello Limited Edition feels just about right.

My last two vacations by the sea highlighted a real problem with my watch collection: I need a modern dive watch. I took Massena LAB × Unimatic one year and the Military Synchron the other. No matter how much I like the watches visually, they are too big for me, or at least they feel a bit too thick and too heavy. And that’s where Oris Star hits the sweet spot. It isn’t dramatically thinner, but it wears much smaller. I find it more comfortable than both previously mentioned divers. 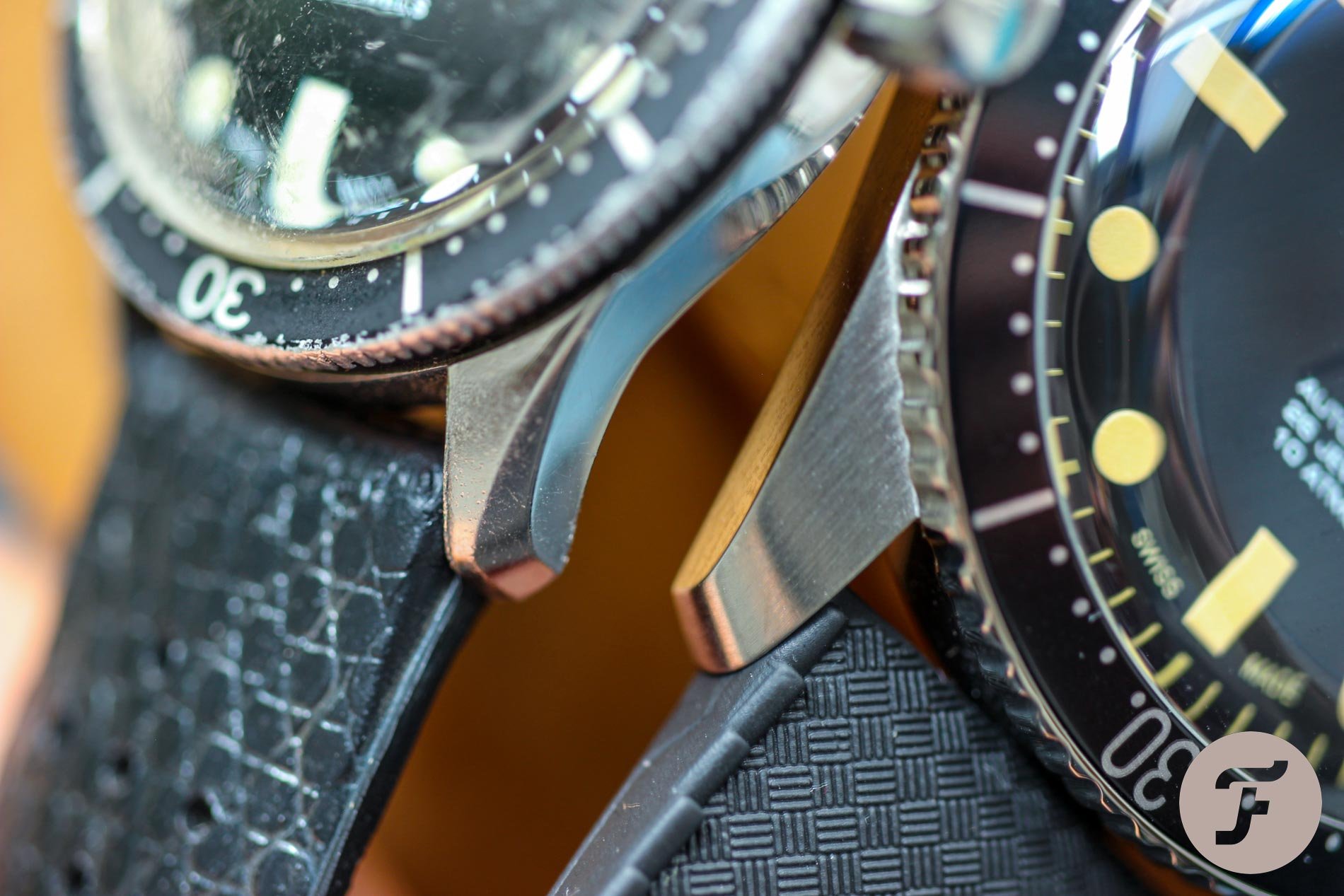 If we agree that the original Oris Star has a perfectly legible dial, the new Divers Sixty-Five Fratello LE brings it to the next level. To my great surprise, there are a lot of updates in comparison to the original. The modern one separates the minute track and the lume dots. The original has all the lumed indexes pushed (or integrated) into the minute track.

I did not measure the lume dots, but they seem to be the same size on both models. To my surprise, the rectangular indexes at 12, 6, and 9 o’clock are notably more prominent in the original Oris Star with a case that measures 4mm smaller. The logo, on the other hand, seems to be a hair thinner on the OG. But kudos for the effort to bring back the original branding style.

The date window is slightly smaller than the original one. It’s decent and elegant, but I vouch for a bigger date window. When it comes to the color, I don’t feel anything, so I guess I don’t care much about what color it is. I like the white one, but on the other hand, I don’t mind the black one. 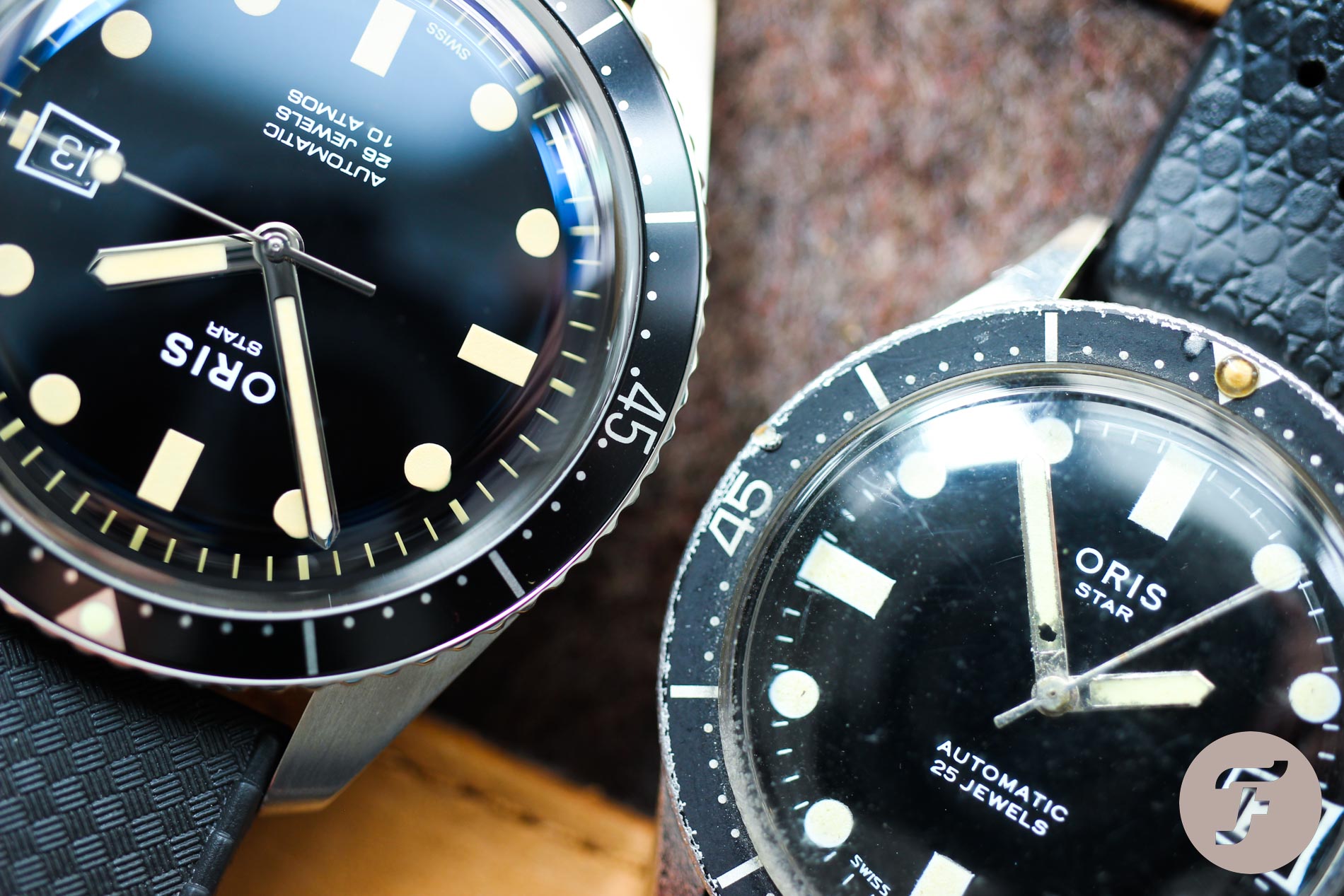 Where I vote in favor of the original Star with both of my hands is the bezel font. I really liked the wide and round number style, and I feel like we need to see more of it. I also greatly prefer old-school bezel “pip,” but I guess the modern one won’t get chipped off so easily. 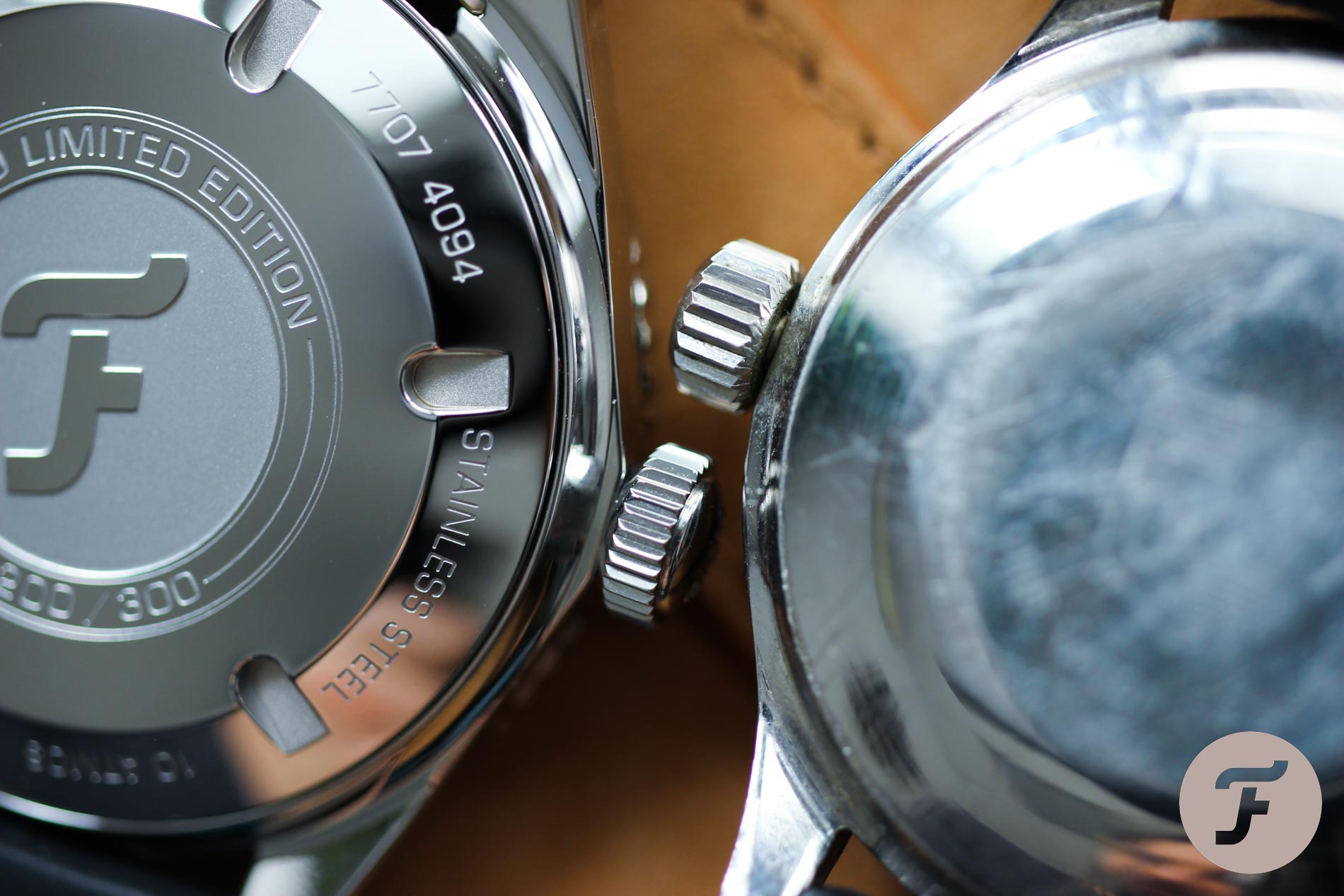 The screw-down crown is a big update, and I would be really happy if the original had one too. From a design perspective, it is slightly less chunky, and surprisingly, it has more vintage flair than the original one. I don’t mind either design. 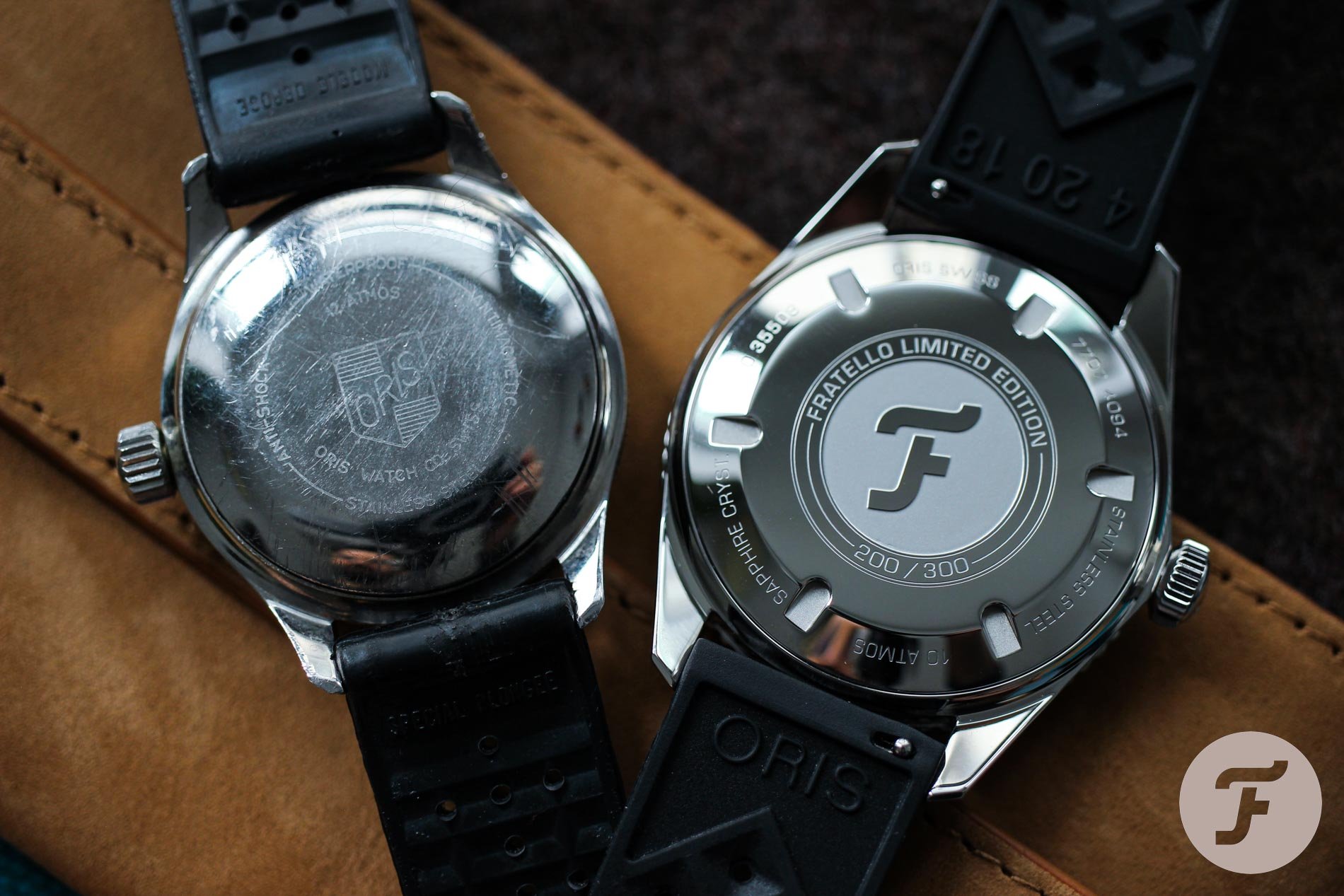 The lugs on the original Oris Star are a bit more sculpted, but the OG doesn’t have the nice lollipop seconds hand that the new one has, a detail that I find suits the dial much better. Also, notice the extra-long counterbalance on the new one; excellent detail indeed. And as I am clearly biased, I won’t get dragged into a discussion about why the new case back is way more unique.

There is one detail that didn’t change but deserves a standing ovation — the hour hand. Well, in comparison to the original, it’s no big deal; it’s the same. But if you look at the current Divers Sixty-Five range, you won’t find any other watch without a small split on the hour hand. RJ was modest about it, but to have Oris remove it? I found that a small yet huge victory. That single detail can easily justify the purchase, I believe. It’s the only available modern Oris Divers Sixty-Five with the original iconic hand style out there, baby!

I don’t want to get ahead of reality, but just after three days on my wrist, I feel that I might just have found my ultimate summer vacation duo — the original Oris Star for the evening and the Oris Divers Sixty-Five Fratello Limited Edition for the splashy days. How do you feel about these watches in comparison to each other? Let me know in the comments.

And if you want to get your hands on one of the last few still in stock, head over to the Fratello Shop now!