The Fast And The Fratelli: Sinn 910 Anniversary Versus Zenith El Primero A386 Revival

Welcome to today’s edition of The Fast And The Fratelli. I’m making it easy for myself and adding two contestants with vintage vibes to our competition. Vintage style is still incredibly hot. In the days those vintage-styled watches refer to, mechanical chronographs and racing were inextricably linked. You read it in the title: Sinn is going to confront Zenith here. Sinn has a reputation regarding tool watches, which is what we’re talking about. But how could that German brand have any chance against a more than 150-year-old Swiss watchmaking heavyweight? Well, read on to find out!

The goal is simple, and so is the race. During The Fast And The Fratelli Grand Prix, it’s up to you to elect the best racing chronograph of the past ten years. The competing watches need to track elapsed time for at least one minute, and they also require a tachymeter scale. They must have been released in the past ten years, they must be mechanical, and, certainly, they must be thoroughly awesome. So then, step aside and make way for today’s contestants. May the best one win! 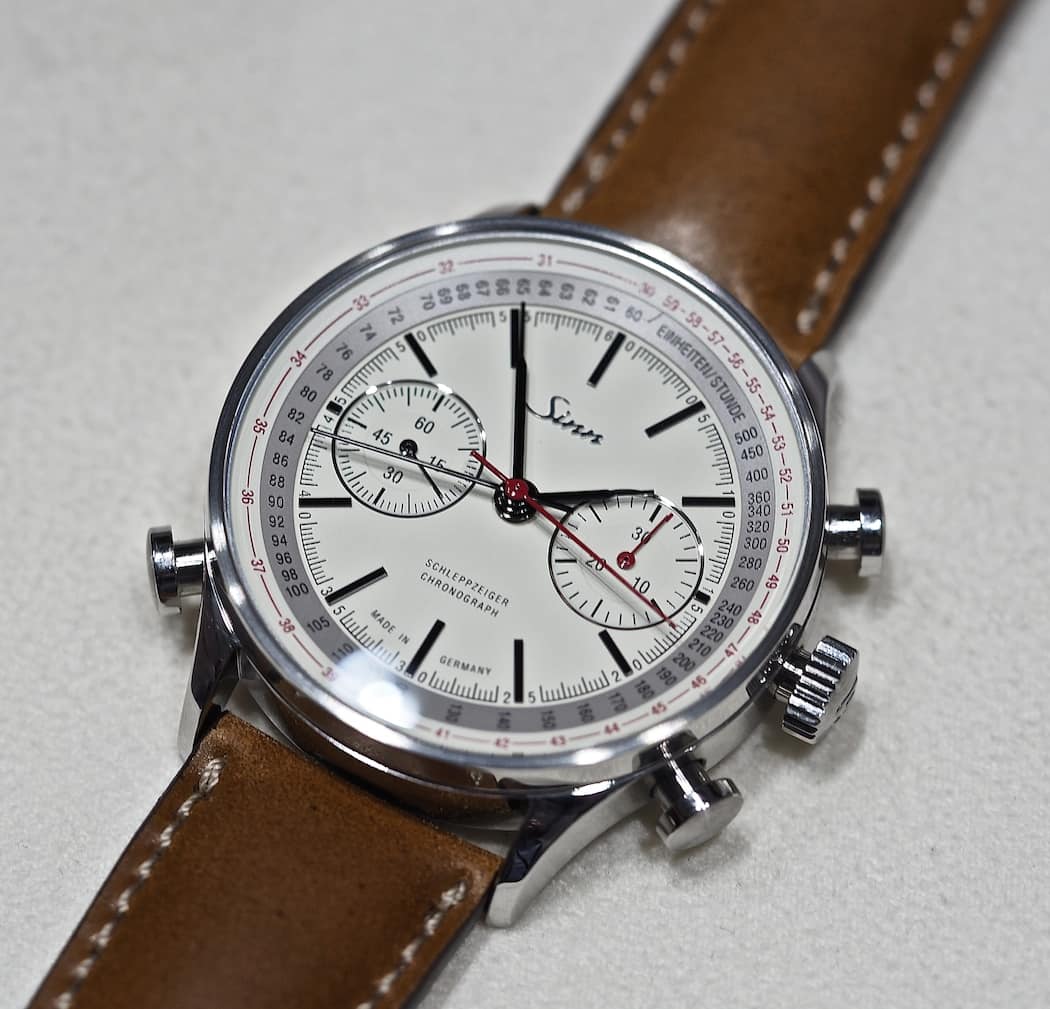 Apart from being a rather handsome take on the sports chronograph theme, Sinn‘s 910 Anniversary is a split-second chronograph, or rattrapante. Sinn introduced this model in 2016 to celebrate the brand’s 55th anniversary, hence the name affix.

The entire design focuses on the clean main dial

The bright dial in an off-white color contrasts well with the dark applied hour markers to immediately create an instrument-like character. The polished steel edges of the sub-dials are a discreet but charming detail that enhances the overall appearance of the dial. The inner part of the rehaut is slightly subdued by a silver-gray background to prevent the tachymeter scale printed on it from cluttering the dial. This tachymeter scale continues on the outer part of the rehaut. Here the background color is the same as the dial, but the designers have reduced the contrast and therefore the conspicuousness of the tachymeter scale through the use of red lettering. The entire design focuses on the clean main dial. The almost non-existent bezel further reinforces this. Accordingly, Sinn even omitted a date.

The steel case has brushed flanks. The other surfaces are polished. The clean, bright dial and super-thin bezel could make the watch appear larger than its actual size of 41.5mm × 15.5mm would suggest. Very short and thin lugs compensate for this. The 10-bar water resistance relieves you of any worries when getting in contact with moisture. 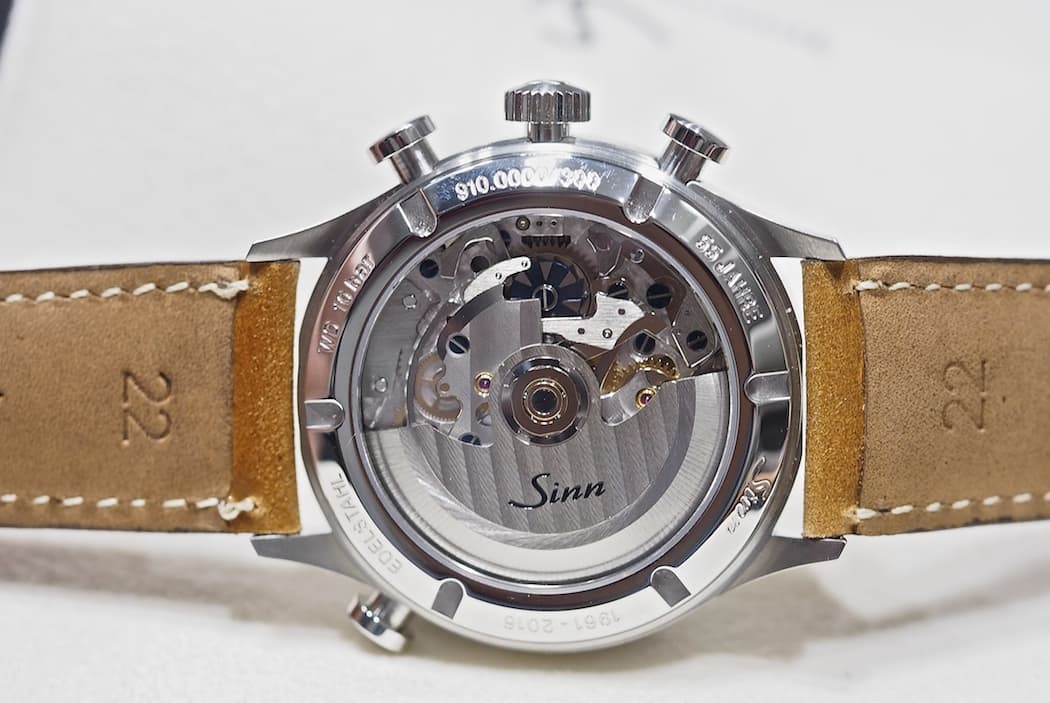 What might appear like a minor addition, in fact, requires a major enhancement of the movement to provide this functionality. The movement in the 910 Anniversary is a substantially enhanced ETA 7750. La Joux-Perret, who manufactures this movement, has added not only the split-seconds function but also a column wheel to control the chronograph action. This traditional, high-grade mechanism replaces the simple cam mechanism characteristic of the ETA 7750 movement.

This movement inside the 910 Anniversary is a pleasure to look at through the display case back. It offers various kinds of surface finishings, chamfered and polished edges, and polished blued screws. La Joux-Perret even decorates the fittings for the rubies to mimic gold chatons. This movement is clearly different from what you would expect from a 7750, especially at this price level. The price of this watch, by the way, is €5,500. The original US domestic price was $5,940. Sinn has limited this watch to 300 pieces. 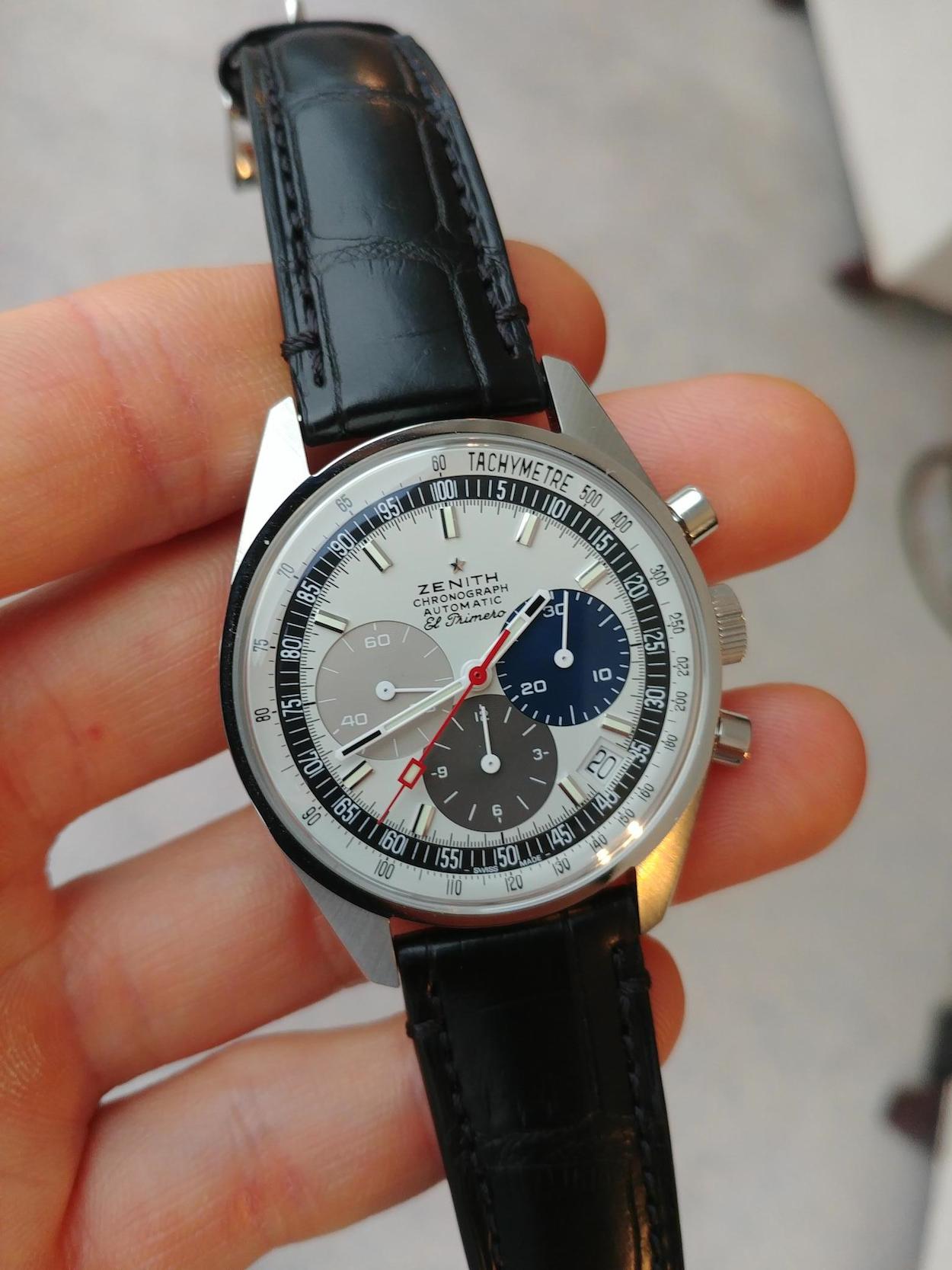 The A386 is the El Primero watch. Together with the A384 and the A385, Zenith presented this watch in 1969 to introduce the brand’s legendary caliber. But it was the A386 that established the dial design that we now associate most with the El Primero — the three overlapping sub-dials in light gray, dark gray, and blue.

In steel, the A386 Revival was only available as part of the 50 Years of El Primero Anniversary Set…

The A386 Revival is a faithful reproduction of the original. The 38mm × 12.6mm case and the dial are almost identical to the original from 1969. There are a few subtle changes that Michael illustrates in his review. In steel, the A386 Revival was only available as part of the 50 Years of El Primero Anniversary Set from 2019, which was limited to 50 sets and cost CHF 50,000. Also in 2019, Zenith released the El Primero A386 Revival in yellow, rose, and white gold with 50 pieces of each gold variant for €19,900. In 2020, Zenith presented an unlimited edition in steel, but with sub-dials in three different shades of blue, as the Chronomaster Revival A386 Manufacture Edition. What we’re looking at here is the version closest to the original, which is the one from the 50 Years of El Primero Anniversary Set.

The A386 offers a classic design, including the signature sub-dials. Like the Sinn 910 Anniversary, it has a two-part scale at the outer edge of the dial. Zenith intended the inner black ring, known as a decimal scale, to offer a 1/100th-of-a-minute measurement. The outer scale is a tachymeter scale. The red seconds counter adds an accent of color to indicate that this is a sports chronograph, and there is a nicely integrated date window at 4:30. 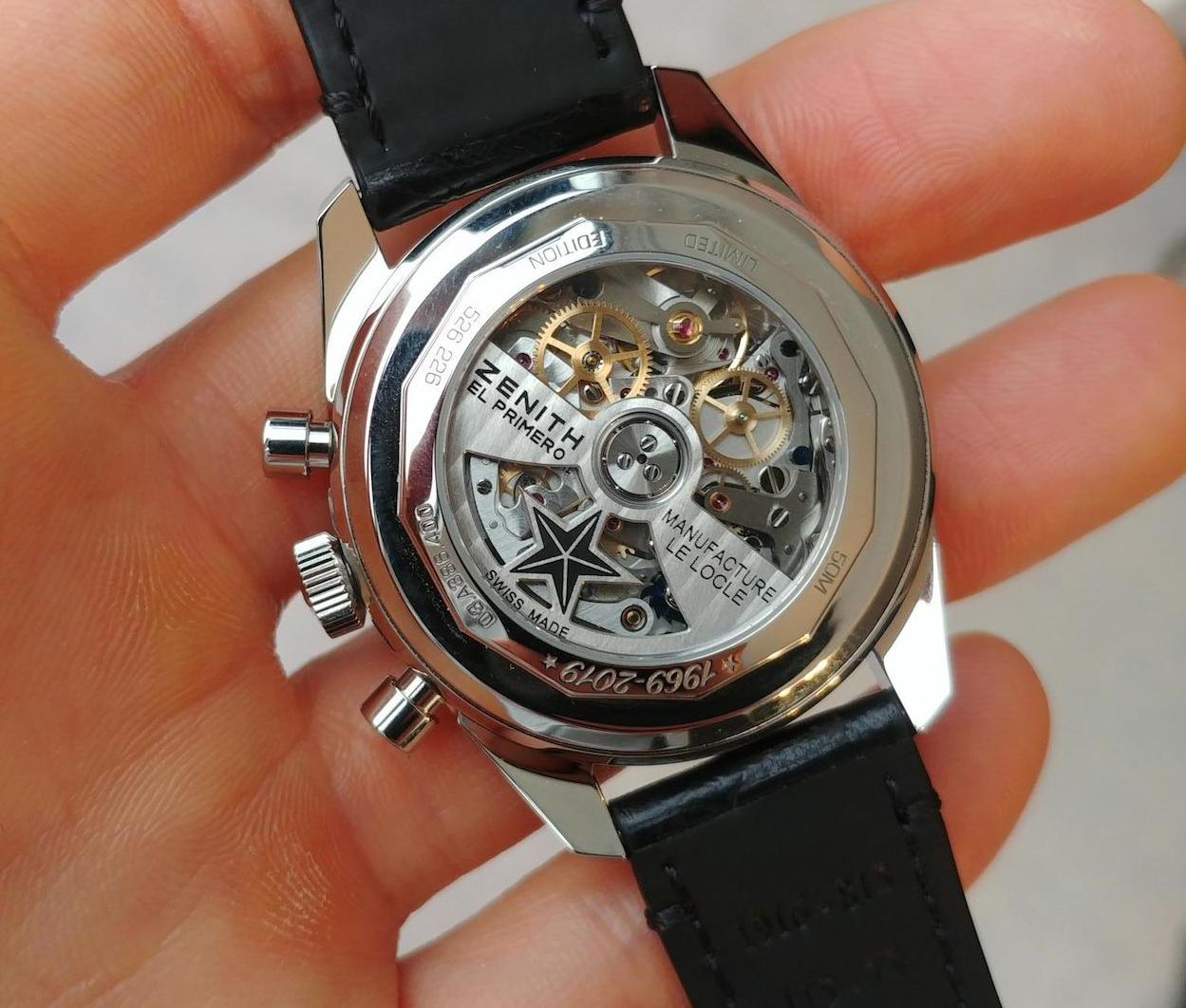 The name El Primero honors this movement as “the first” automatic chronograph in the world. There are two other calibers that this title is attributed to as well — the Seiko 6139 and the Chronomatic Calibre 11. But I will not go into the technicalities of that because we’re here to focus on another competition.

Zenith has built this movement entirely in-house in the brand’s manufacture in Le Locle since 1969. There was, however, a period from the middle of the 1970s to the beginning of the 1980s when the brand did not build this caliber and, in fact, almost lost it. Please refer to Jorg’s article to learn about this story.

This movement is a classic!

Obviously, this movement has an eventful history. Aside from being one of the first automatic chronographs, it is a high-beat caliber that swings at a frequency of 36,000 vibrations per hour, or 5Hz. The chronograph function is controlled by a column wheel and a traditional, optically pleasing horizontal coupling. This movement is a classic! The A386 Revival contains the El Primero 400, which showcases a proper complexity. The finishing is not stunning, but it is neatly executed. 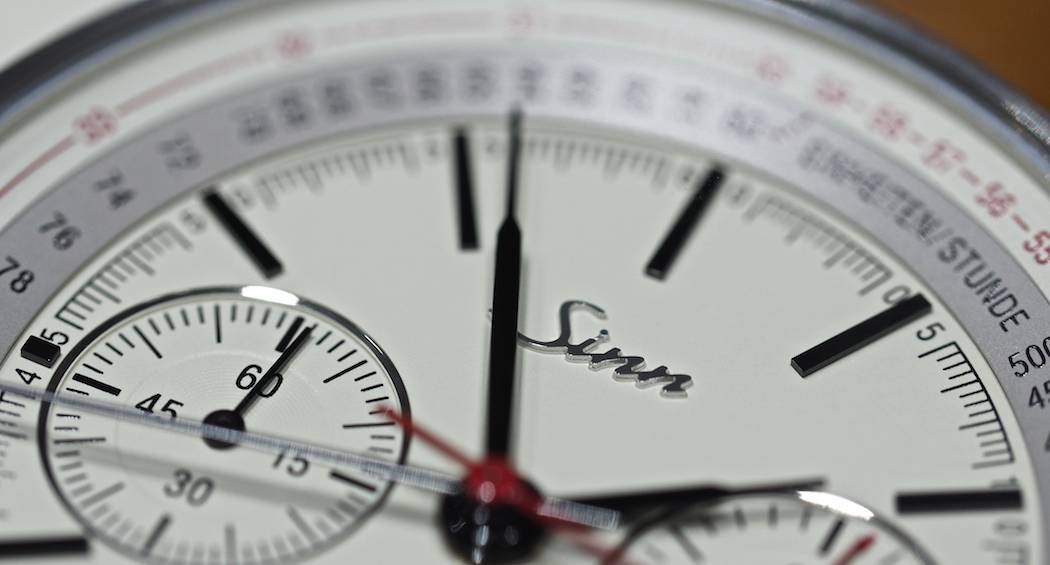 So these are the contestants for this match. In one lane, you have the Zenith El Primero A386 Revival, which exudes tradition like hardly any other sports chronograph. In the other lane, the Sinn 910 Anniversary presents itself as one of the least expensive, but definitely not least attractive, split-seconds chronographs on the market. Go, Fratelli! Your vote decides the winner of this race.

The Fast And The Fratelli — Sinn 910 Anniversary Vs. Zenith El Primero A386 Revival