Tropic Sport Strap Review – The Return of a Vintage Icon

Tropic Sports straps are making a comeback, so we take a look at them.

How it all started – for me

I was still just a vintage-watch-rookie, a regular at forums, especially WatchUSeek’s Omega group, when I came across a watch on eBay. It was about 15 or so years ago, and the timepiece in question was a cheap diver by the name of Cordura. I think I bought it for $25. It had a large case, a cool bezel, and a black plastic-looking strap with big holes. I liked the look, so I pulled the trigger – as we used to say in the forum. The parcel came a few weeks later, wrapped in kitchen towels and old newspapers. The strap looked old, it was pretty stiff too, so I took it off and threw my Cordura on a NATO. At the time, NATO and Zulu straps were inclining in popularity among watch guys, so that was the obvious choice for me too. The watch looked awesome with it. 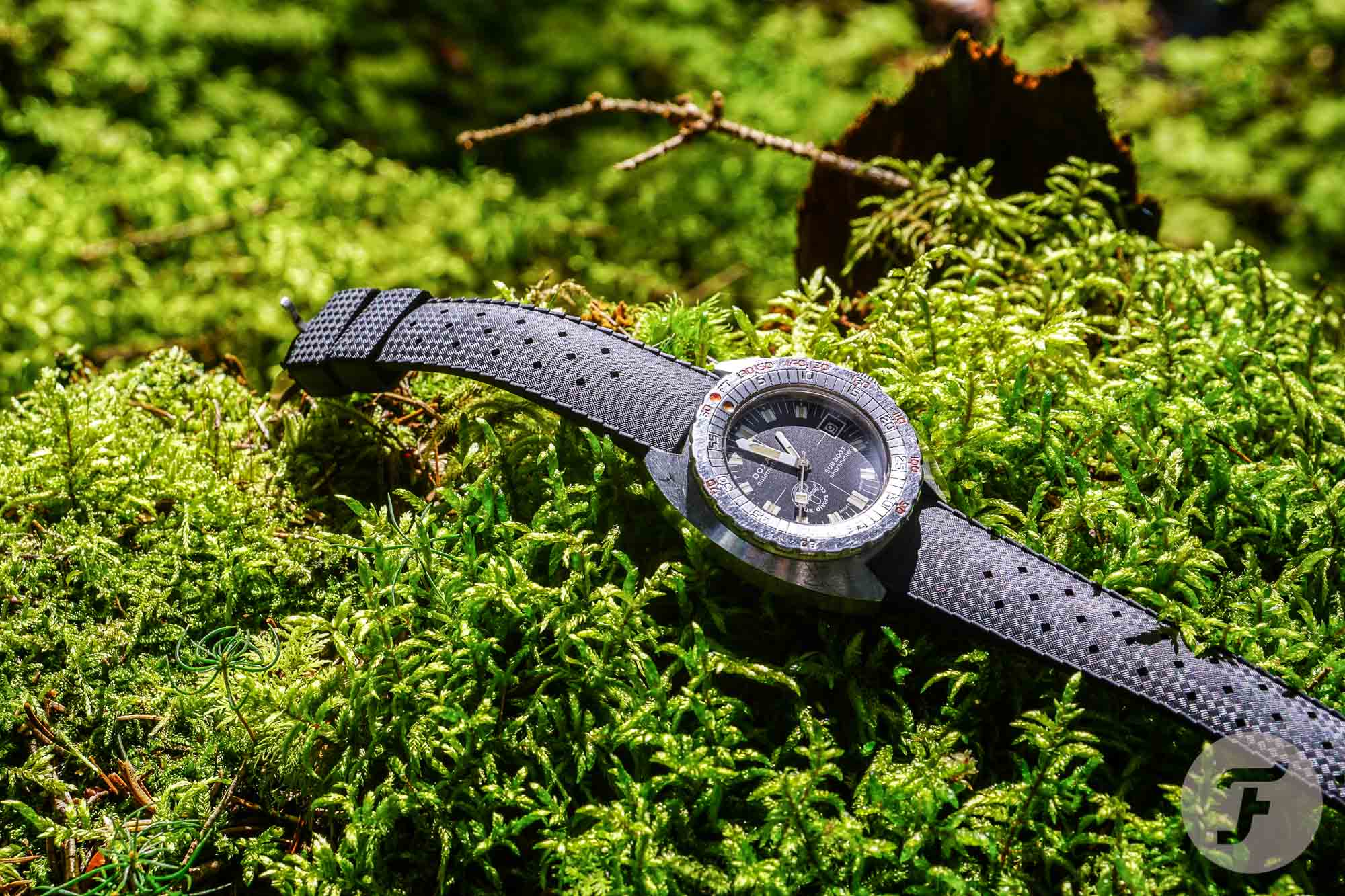 The old strap, however, landed in my watch box. A few years passed, I was still regular on forums but with a much broader knowledge of vintage watches. I developed an interest in sports watches and chronographs from the 70s. Not even sure how, but I found a thread about vintage Tropic straps. Wait a minute; I have something like that laying around. So, I rushed to my box, dug into it, and found the thing. I flipped the strap over and read what was on it with some excitement. It said; 19mm Tropic Sport. This discovery triggered my interest in vintage Tropic straps, something that is still ongoing today. Over the years, I collected almost every Tropic mode in different colors and sizes. I came across fake ones and cheap Chinese copies and some new reinterpretations. They, however, were never even close to the real deal. 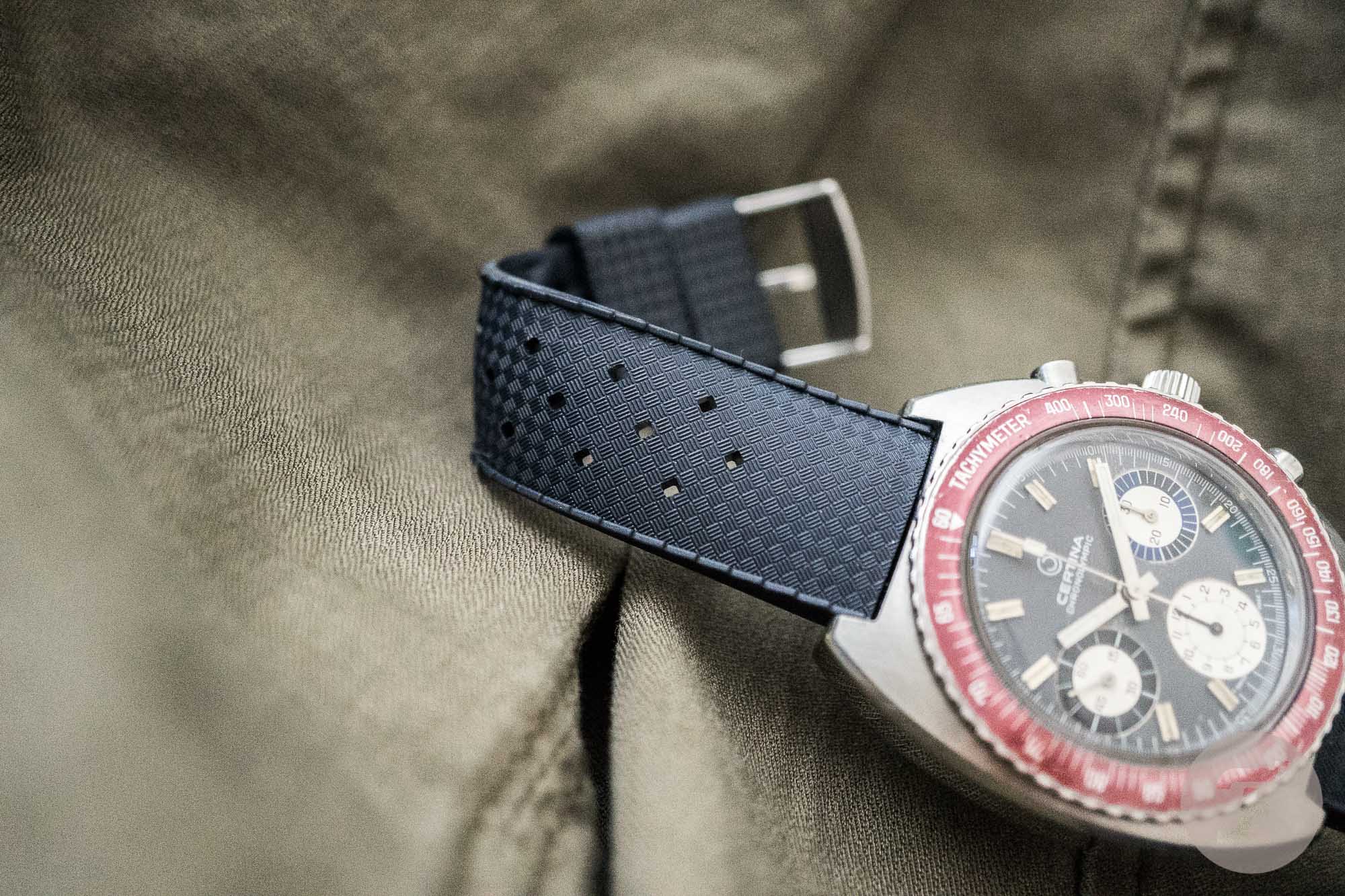 If you are a fan of vintage sports watches, particularly divers, it’s possible that you already heard of vintage Tropic straps. Better yet owned a pair or more. Numerous articles have been written on these awesome accessories. More often than not, the topic was revolving around the magic that these straps possess. Why are they so special? Why do collectors go crazy for them? And why no brand could ever reproduce these simple little rubber straps? I don’t have the answers to all of the questions, but I know why I love them. They look cool, they wear comfortably, and they look just perfect on most vintage divers or sports watches. Their quality will still compete with most modern straps, and this is no small thing for a strap that is coming from the 60s-70s. However, there is one problem with them; they’re extremely difficult to find these days. 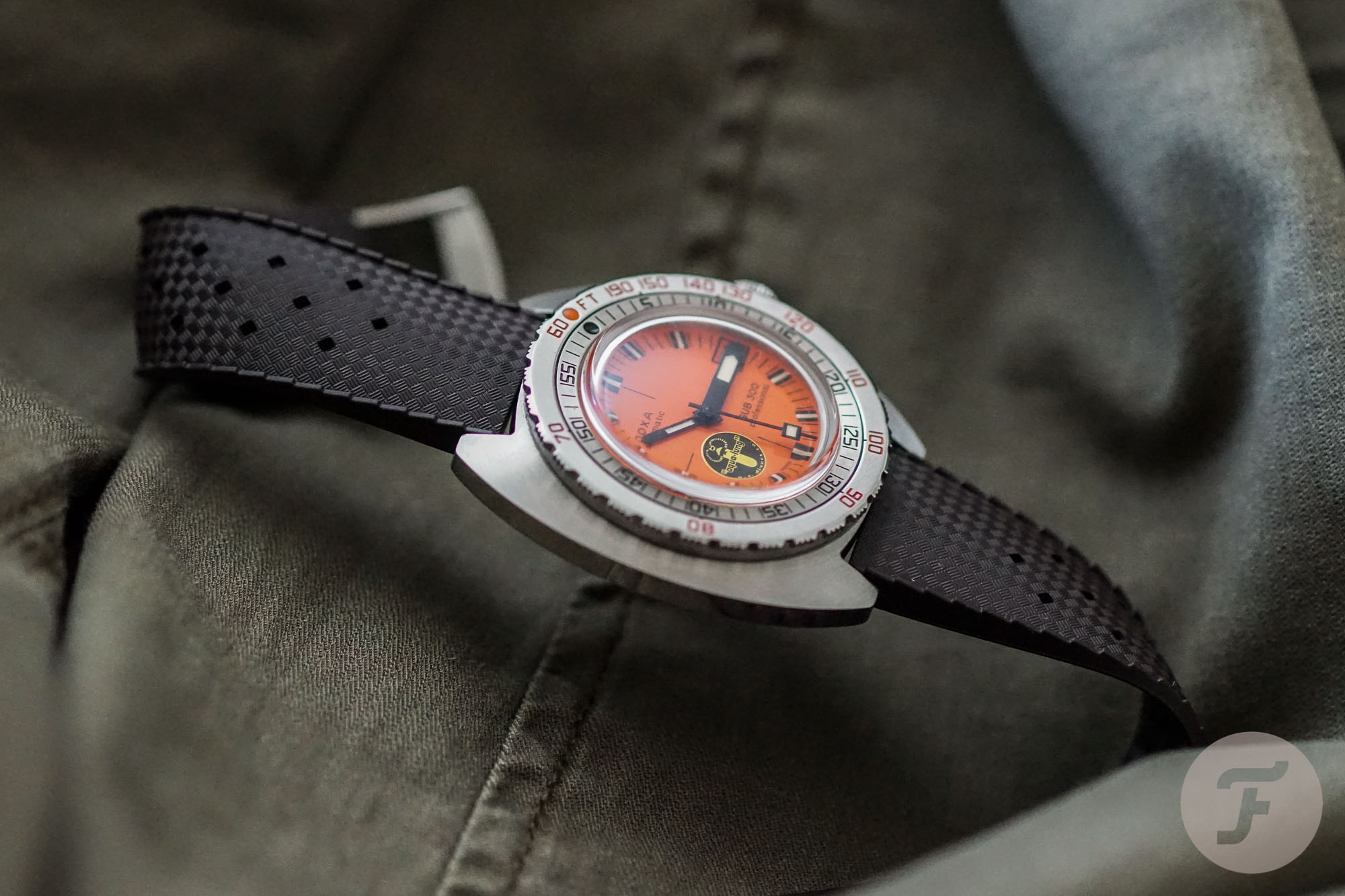 I heard about the rumors of Tropic coming back into production already years ago. At the time, the project was still in discussion, and nobody really knew when, if at all, the straps would be out. Finally, after many years, we can put our hands on new Tropic straps. I don’t want to talk about the history of vintage Tropic straps (that itself is worth its own article) just mention that back then one could get four types of straps. You had the Tropic “Classics,” Tropic Sports, Tropic Star, and Tropic 2000s. The Classics, as most collectors call them, had no name printed on them. These considered the “original” Tropic straps and are precisely the ones that are making a comeback now. One could get them either with a curved or straight end. The new Tropics only come with a straight end – so far. 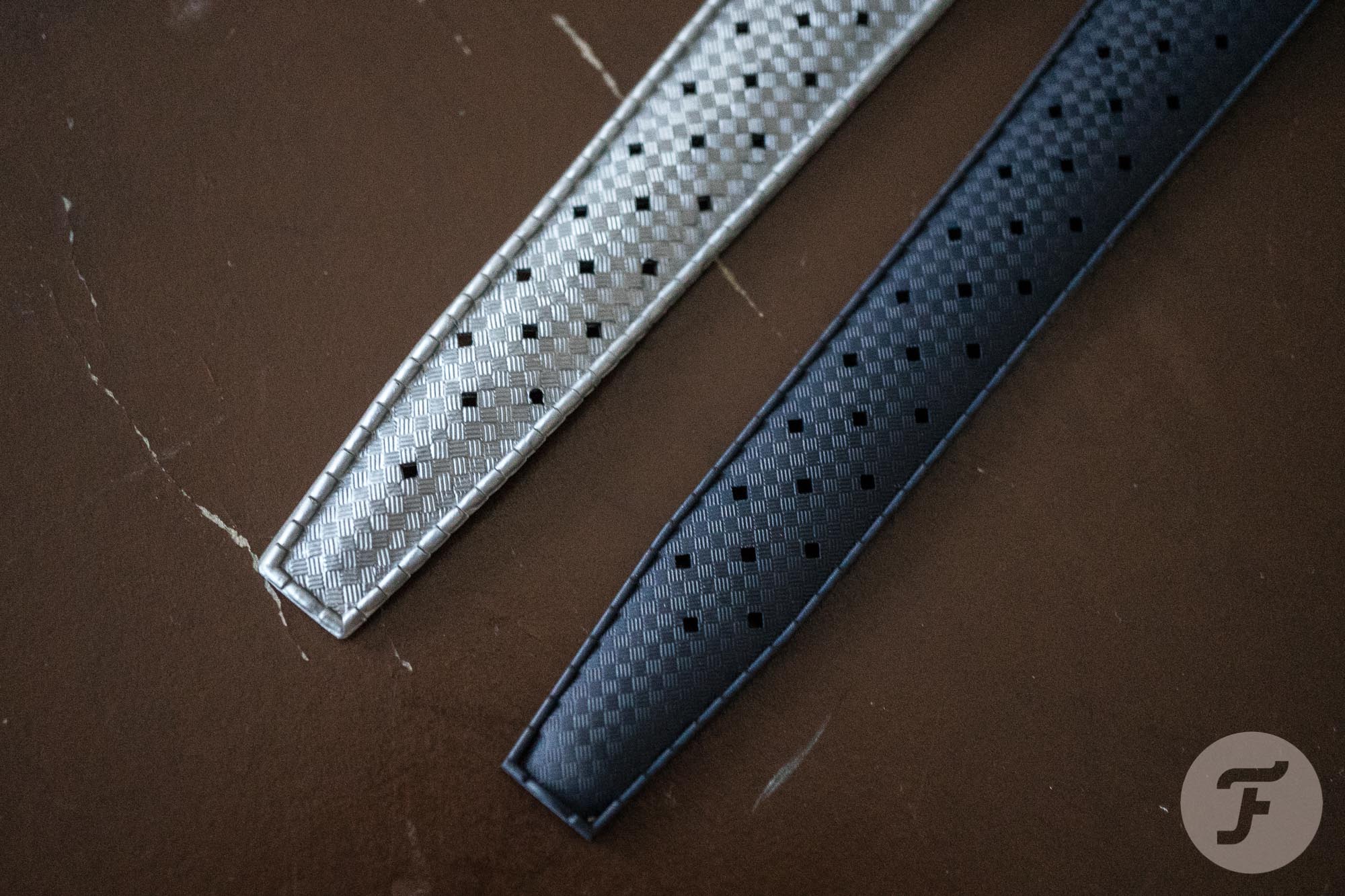 Vintage (grey) and New (black) Tropic straps side by side

I received four colors for the review; black, brown, (NATO-)green, and brown. On Tropic’s site, you can find two more additional colors. These would be orange and Poseidon yellow. I’m not much of a loud colored strap person, but certainly, understand diver guys who are. Yet, I still believe that the biggest sellers will be black and blue ones. Back in the day, Tropic used to produce a wide selection of colors from burgundy to royal blue, from yellow to green, and so on. The three main colors were black, grey, or white, and not every model was made in every color. So, while you can possibly find a Tropic Sport in grey or blue, chances of finding a Tropic Star in these aforementioned colors might be slim. As far as the new Tropics are concerned, they all look fantastic, although the blue and black are very close in tone. 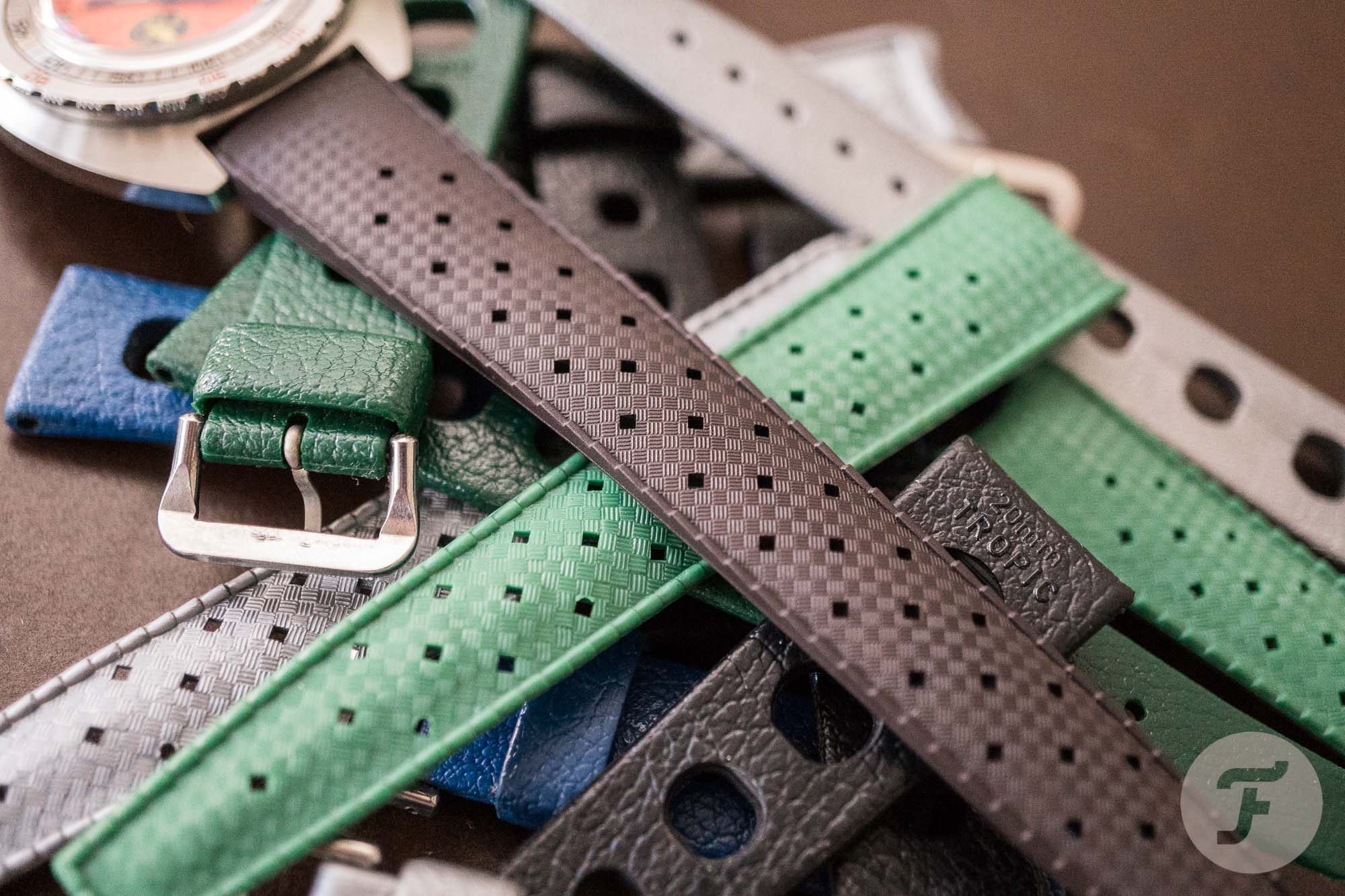 Obviously, Tropic was not the only brand back then with such products. Many other brands had similar products. Who copied who, I do not know. But for collectors, only the real Tropic straps have value. In recent years as vintage watches and everything around them became more and more popular other brands also started to copy vintage gear.  A bunch of lookalike Tropics came to the market. Some were really nice and very close to the original in terms of design. Others, well, not so much. When Oris released the Divers Sixty-Five, it also came with a rubber strap that was the exact copy of the original classic Tropic. I’m lucky enough to own some vintage Tropics so I could compare them to the new ones, and I have to say, they are just as impressive as their vintage counterparts. 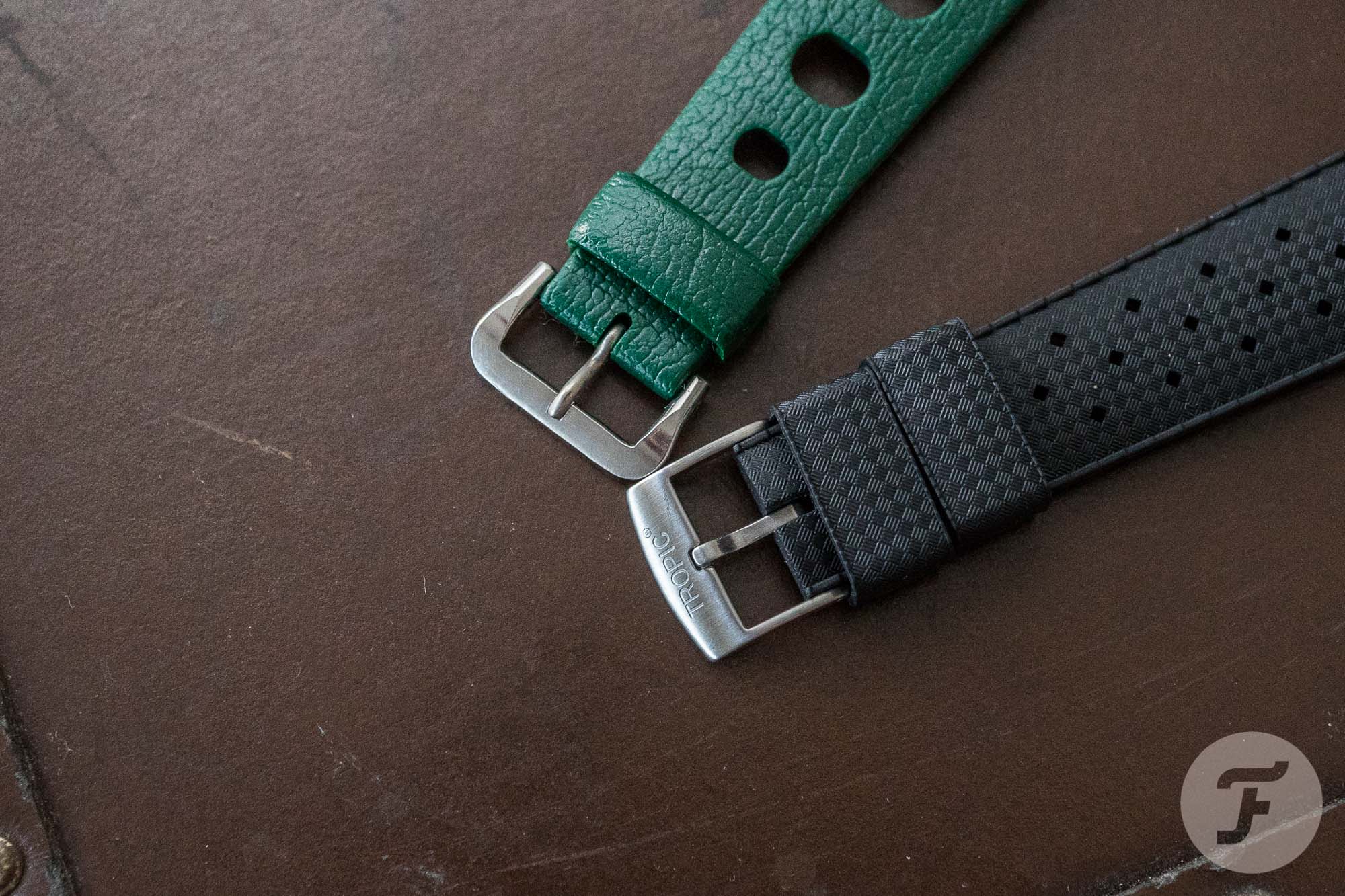 Please Tropic, bring back the vintage buckles too

The straps are soft and flexible, just like the vintage ones. They are longer in size at 12.5cm and 8.5cm. The vintage ones are around a centimeter shorter on both parts. What makes an original Tropic strap (vintage or new) instantly recognizable is the name and size stamped into the underside of the strap at the lug end. The tampering is a whopping 4mms, which I like very much. It gives a very sleek look to the watch with the Tropic on. Every strap has a 20mm lug width and 16mm buckle width. Back then, Tropics came in various sizes from 12mm to 22mm. Once I came across a 24mm original Tropic strap. Those are pretty rare, though. The strap itself is on point, the buckle, on the other hand, is different. Not an issue, but vintage Tropic buckles have an iconic design. 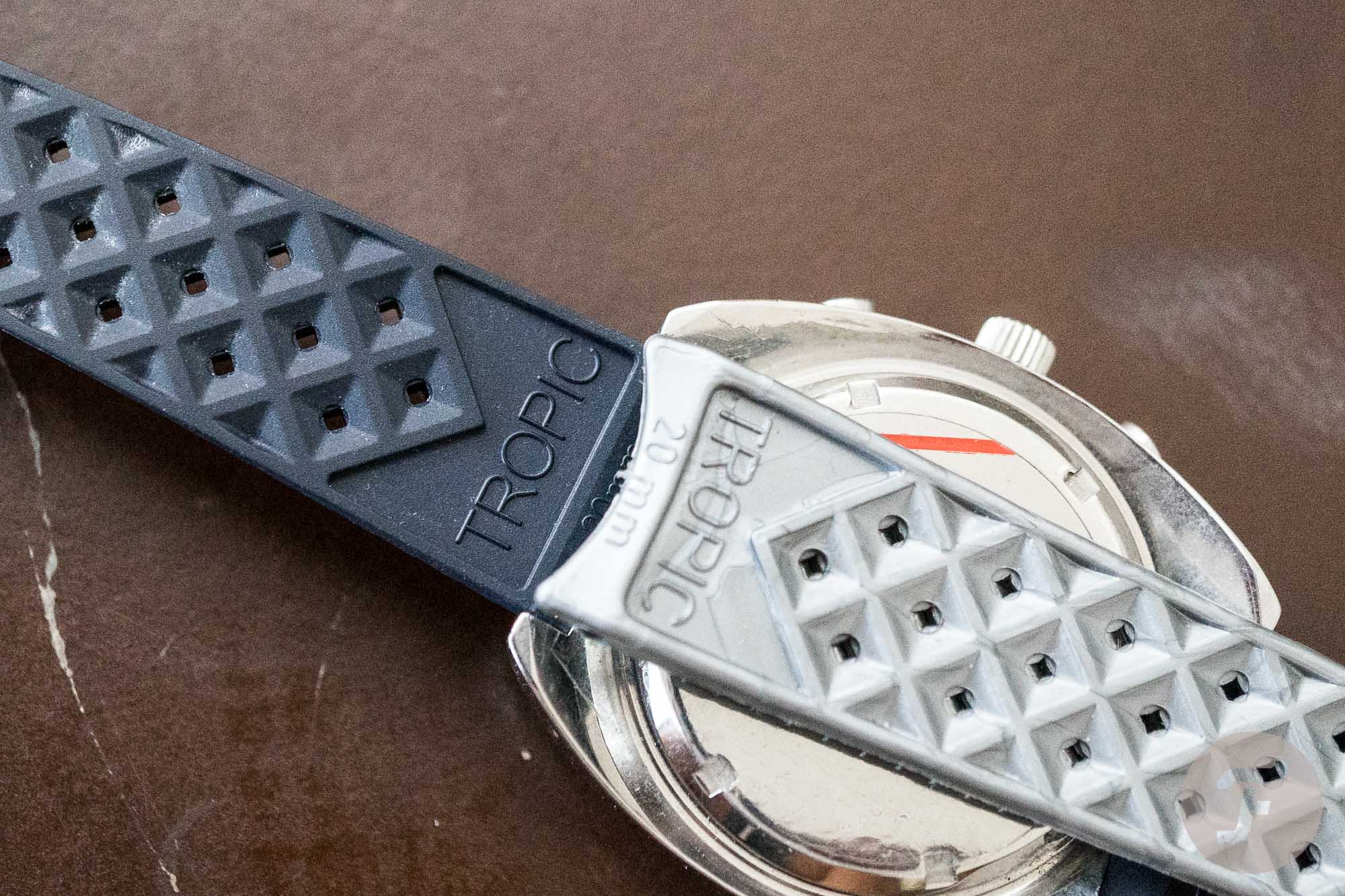 The only way to recognize a true Tropic strap

Why Tropics were so popular back in the day was not only due to their looks. This was a key factor. More importantly, though, they were water-resistant due to their design (those holes are there for a reason) and their material. Nowadays, it’s no big deal to buy a rubber strap, but back in the 60s, it was a different story. However, Tropics were not ordinary rubber, they were vulcanized rubber. The difference is huge. Vulcanizing is a chemical process, and the result is a product that is hypoallergic, does not attract dust (unlike rubber or silicone), water-resistant, stretch, resist tension and does not fade under direct sunlight. Just like the vintage counterpart, the new Tropic straps are also made of vulcanized rubber and have the same attributes. Vintage ones were Swiss Made, and the new ones are all made in Italy. 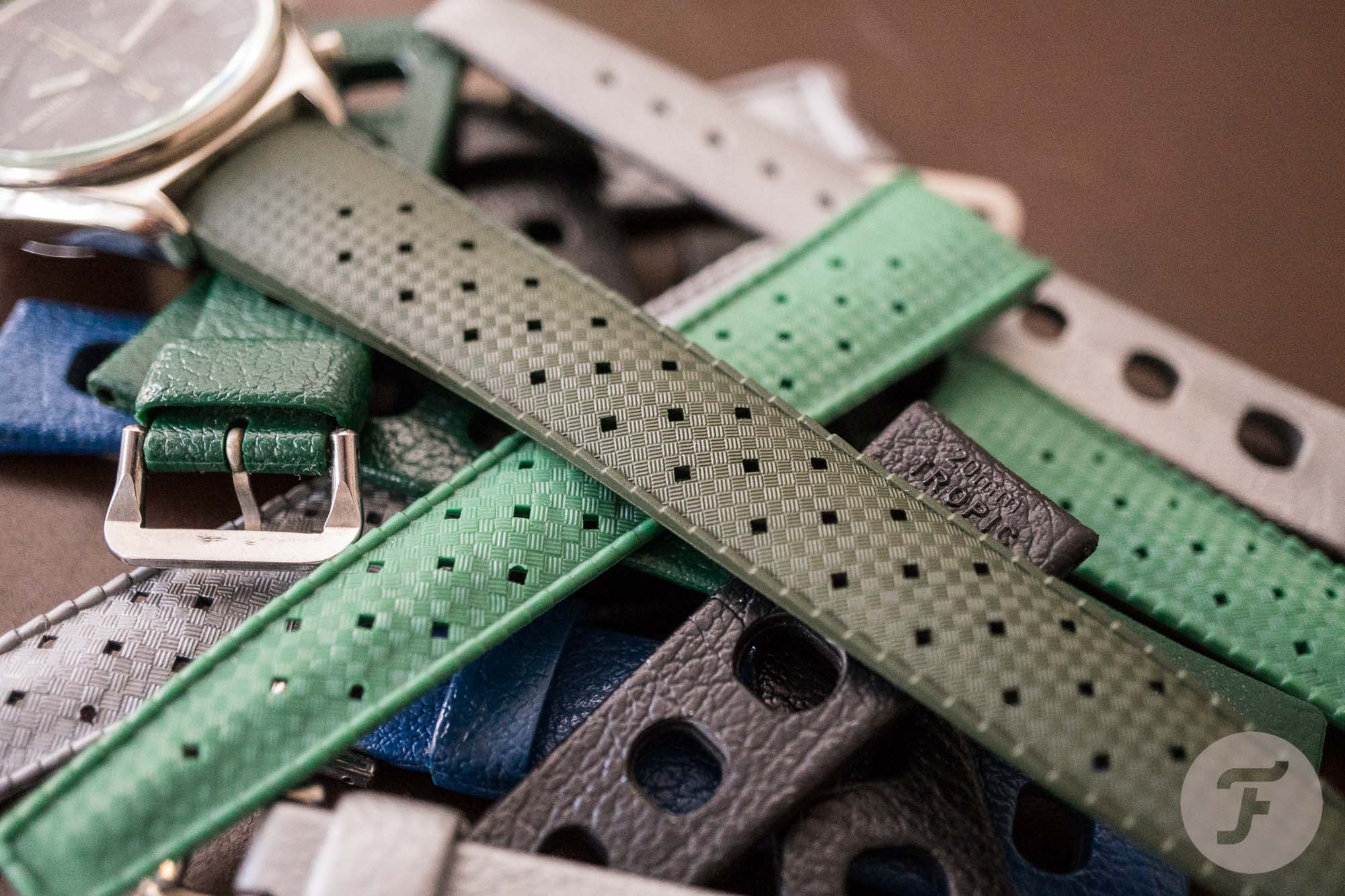 Right now, Tropic strap is only available in 20mm sizes, in six colors with straight ends. Hopefully, over time, the company will start producing the other iconic models, such as the Sport and the Star too. I’m a huge Tropic Star fan, and I think that those straps fit a much larger group of watches. The classic Tropics mostly look good on divers. At least this is my opinion. In terms of quality, there is nothing to complain about.

On the contrary, the strap is comfortable, easy to wear, does not itch, and looks like a million bucks. This, however, comes at a price. The cost of a new Tropic strap is $94.80 (including tax) plus shipping, which is around $10-12 to most European countries. If there will ever be a history book of watch straps and bracelets, Tropic would surely have its own chapter, including the modern versions. 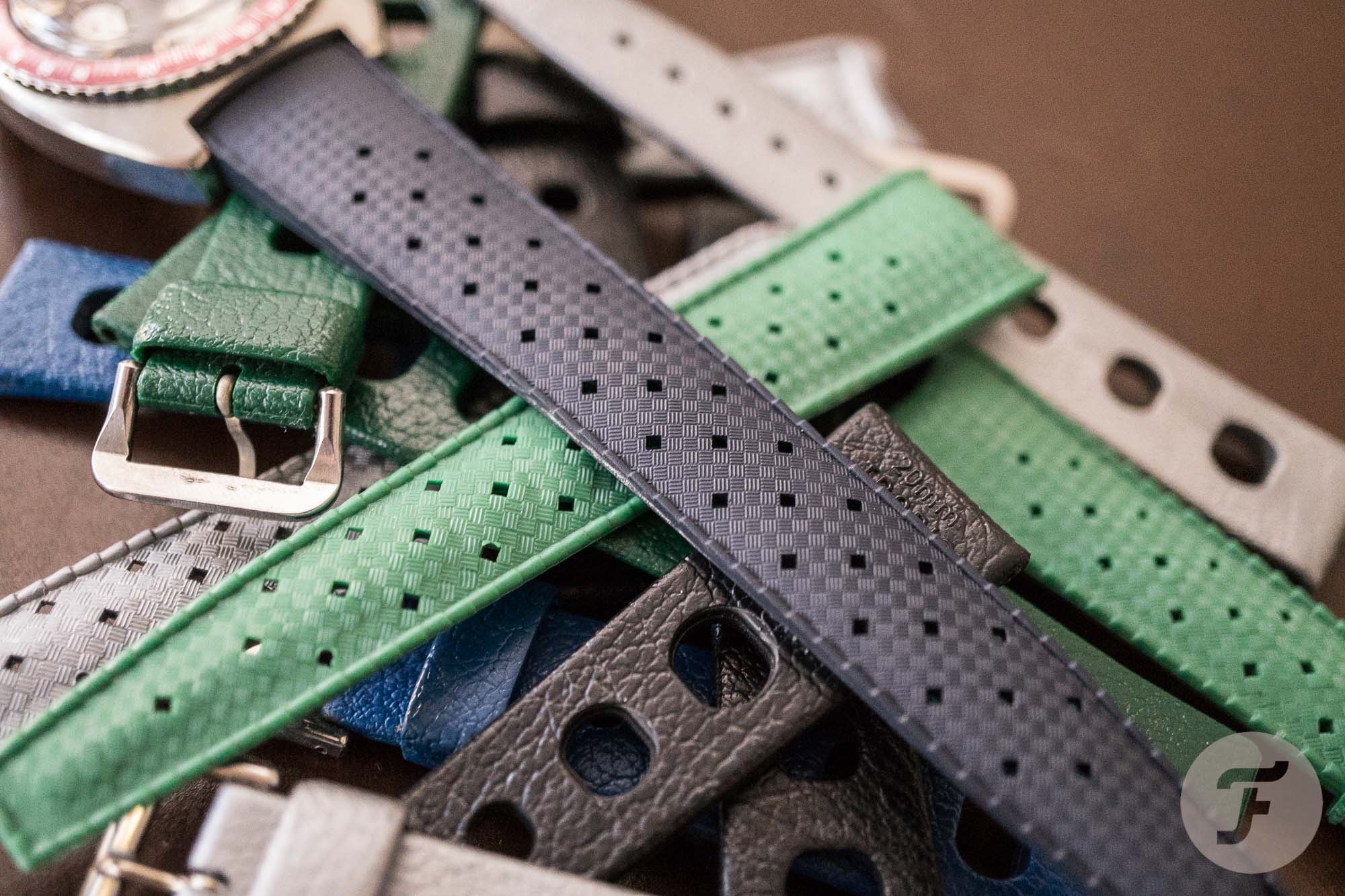