Happy New Year! Let’s kick off this first Speedy Tuesday feature with some awesome photos done by our very own Bert Buijsrogge. We received the Speedmaster Co-Axial Master Chronometer Moonphase “Blue Side of the Moon” recently, and we thought it would be fun to show you some details. 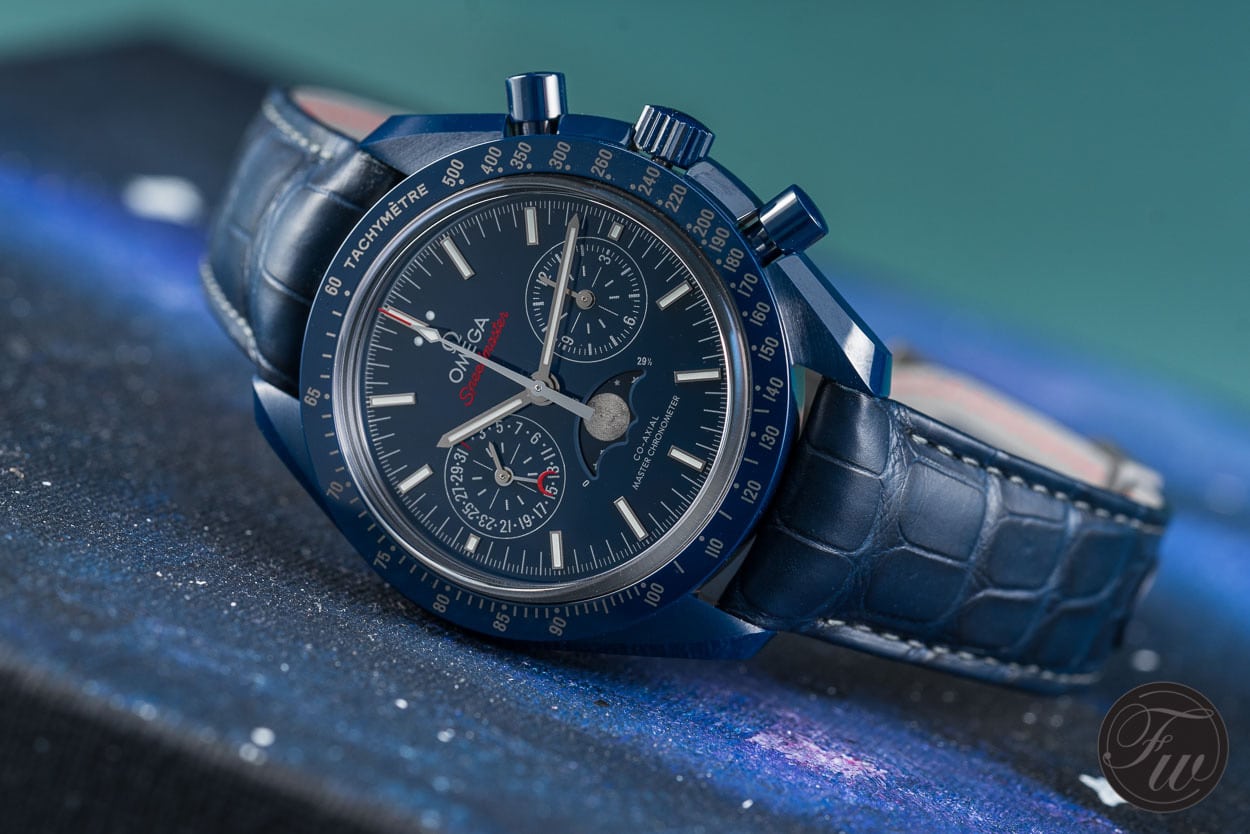 Blue Side of the Moon 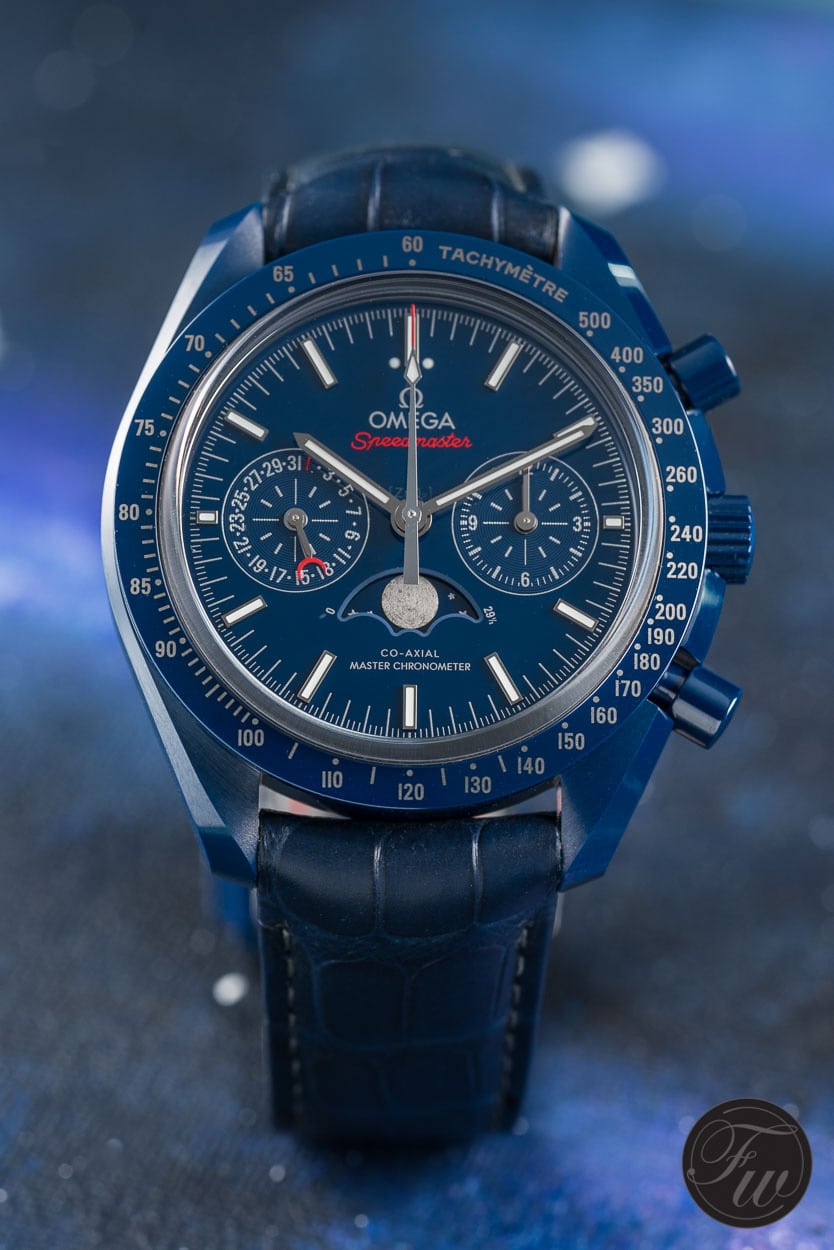 It started with the Dark Side of the Moon in 2013, an awesome and surprising piece coming from Omega at the time. Using their in-house developed chronograph movement (caliber 9300) in a full ceramic watch. The success was amazing. Not only did it sell very well, it was also very much appreciated by the collector’s community. A tough crowd, as you know.  What happened next is that Omega started to create all sorts of versions (grey, white, a whole bunch of variations). Understandable from a business point of view for sure, but to me, the Dark Side of the Moon is somewhat ‘the original’ and the one I would still buy today. I never did, as my focus is a bit more on the hand-wound Moonwatch models. I have to say that the Grey Side of the Moon also sings to me, including the model with the Sedna gold elements and meteorite dial. But yet, the Dark Side of the Moon from 2013 is the model I prefer, with normal buckle (no folding clasp).

These ceramic models were of course based on the – in 2011 – released caliber 9300 Speedmaster chronograph, which I reviewed here long time ago.

Not too long ago, in 2016, they introduced the Speedmaster Co-Axial Master Chronometer Moonphase based on this model (click here for our detailed review of that one).

Last year, Omega decided it was time for another ‘X Side of the Moon’ version, now based on the Moonphase model. Officially, Omega still uses ‘Moonwatch’ in the official name of these 44.25mm Co-Axial Master Chronometer models, but I refuse to do so. Doesn’t make sense and it is confusing for people who are new to this and want to have the original ‘Moonwatch’. So, anyway, this is the Blue Side of the Moon edition of that watch. With an actual moon phases complication. A Dark Side of the Moon watch with moon phases indicator was something I would have expected sooner or later, but Omega surprised with an all blue ceramics version instead.

Bringing It All Together

This Omega Speedmaster Co-Axial Master Chronometer Moonphase ‘Blue Side of the Moon’ with reference 304.93.44.52.03.001 uses a variation on the caliber 9300, namely the caliber 9904. This METAS certified movement has, besides a chronograph, also a calendar and moon phases indicator. You could say that Omega has embedded a high number of their recent innovations all together in this Speedmaster Blue Side of the Moon. The Co-Axial escapement is something that they’ve been using since 1999 of course, but the Master Chronometer designation on the dial is quite recent. These movements are not only chronometer certified by the COSC, after the casing of these movements, the watch is put to the test (again) and officially certified by (Swiss) third party METAS. If all goes well, the watch is certified ‘Master Chronometer’. Meaning that it keeps proper time (0-5 seconds deviation per day on average) after being exposed to magnetism (up to 15,000 gauss), water, in different stages of an unwinding spring, after being exposed to shocks and so on. There are 8 different fields of testing during this program, and if all went well, the watch is certified and ‘released’. We did a write-up on the full METAS program here, in case you are interested in this. 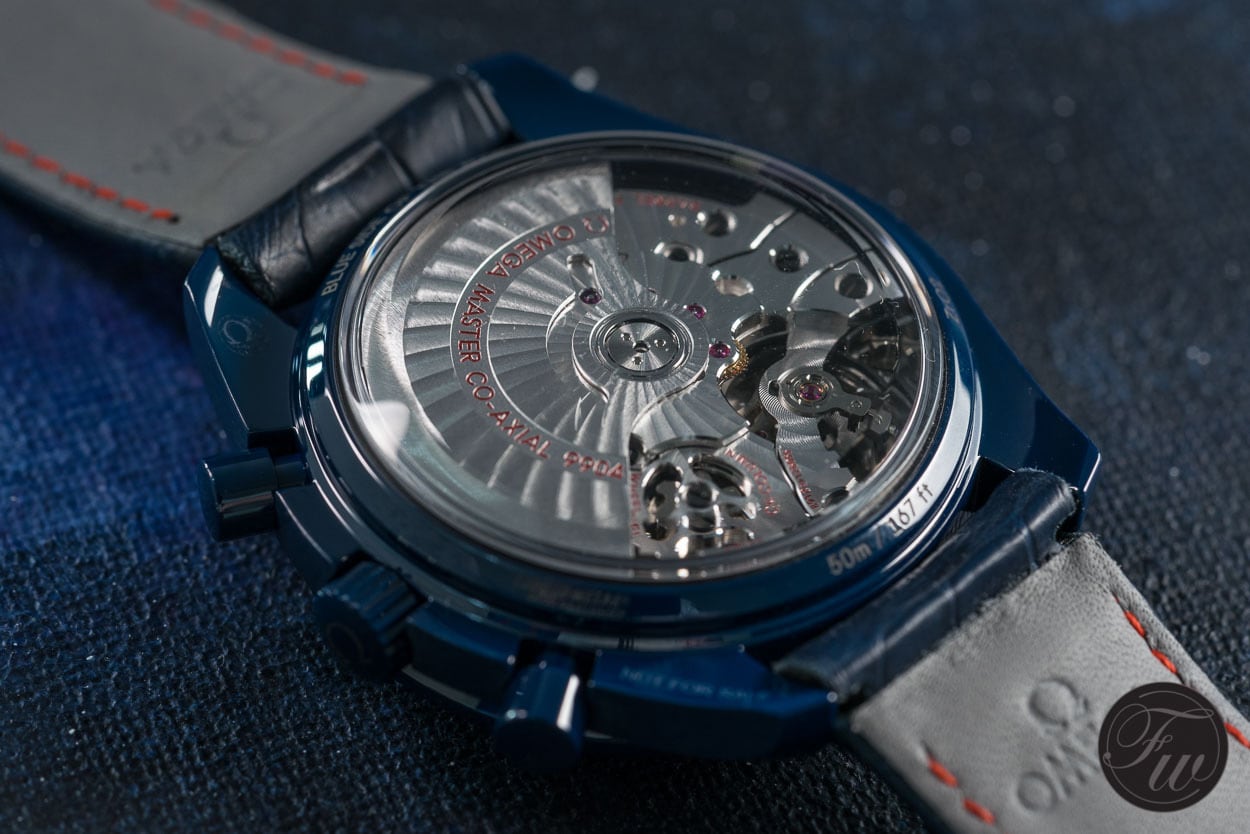 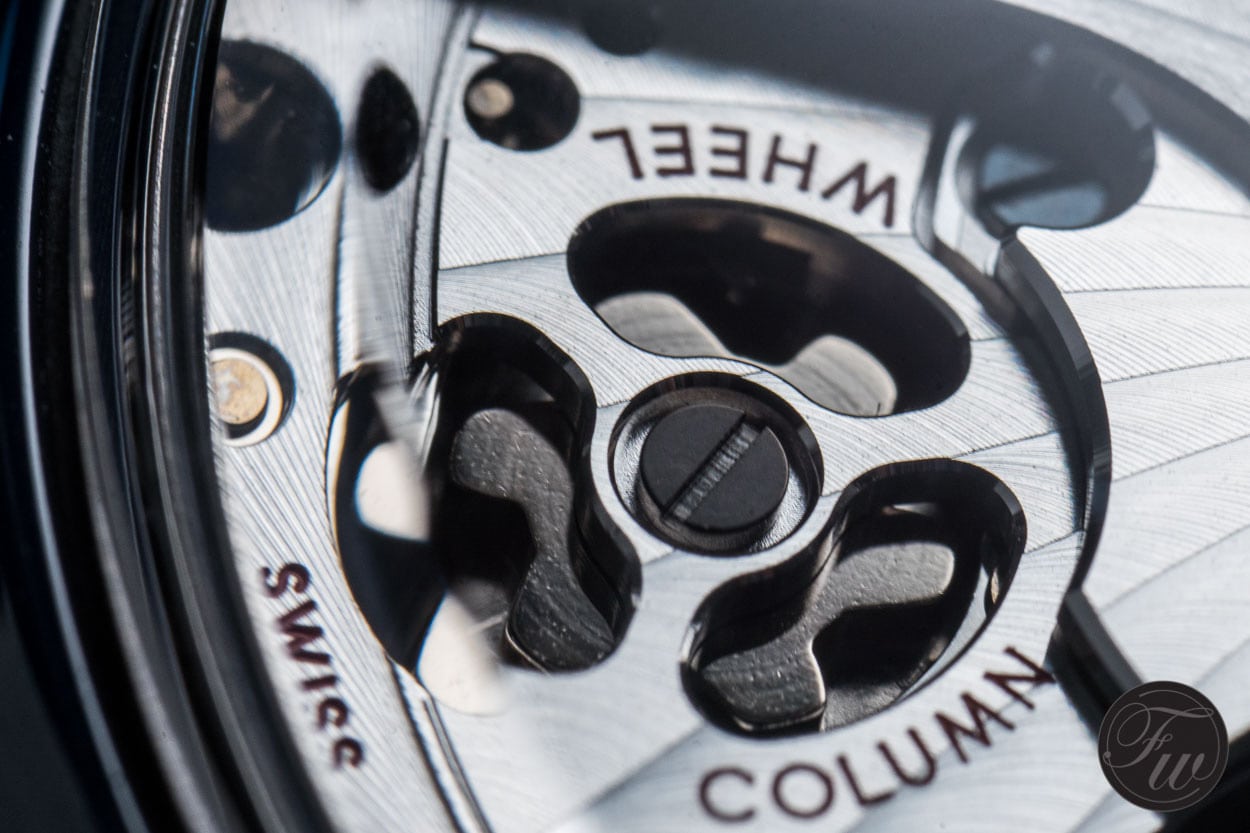 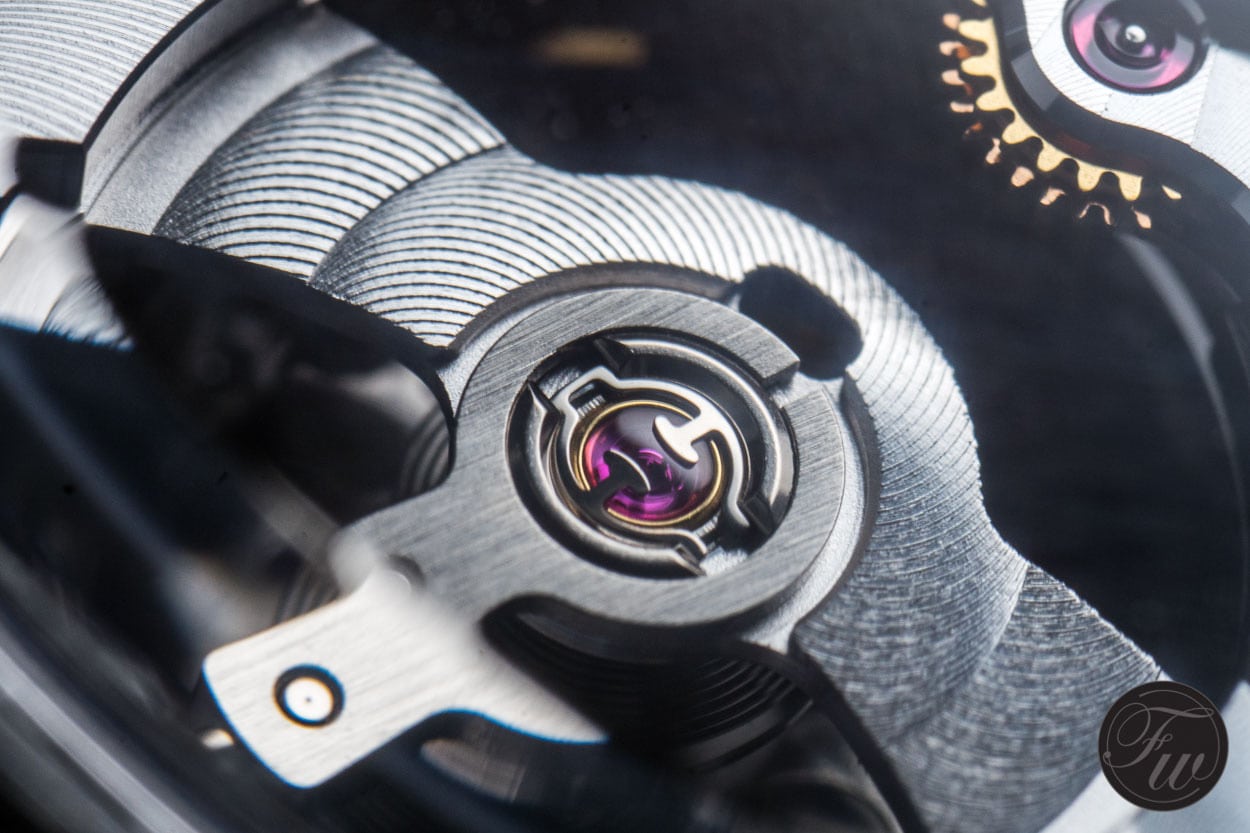 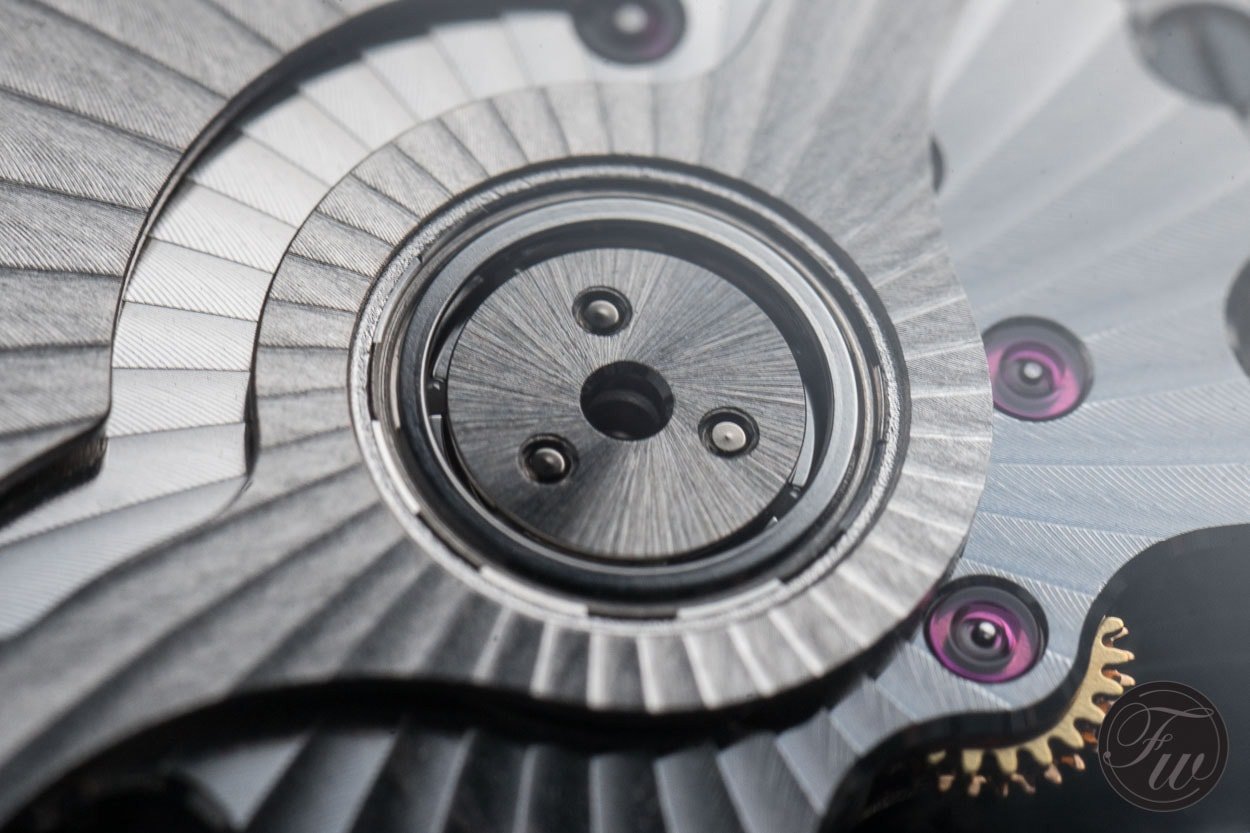 The Speedmaster Professional with hand-wound model (also available with a moon phases complication), is none of this and is actually being manufactured in a more old-fashioned way. It is being reflected in the price of the watches as well of course, where the Speedmaster Professional with Moon phase has a retail price of €4900, the 44.25mm Co-Axial Master Chronometer Moonphase starts at €9500 (in stainless steel). These are different watches, the case, movement, construction of the watch etc. They only look similar, you could say. Omega is upgrading all of their collections, but are very reluctant to touch the original Speedmaster of course. So for those who are looking for a modern piece with state-of-the-art specifications, with a moon phase and do not care whether they have ‘the original’ or not, these Speedmaster variations are a perfect offer. The group that prefers the hand-wound Lemania based Speedmaster Professional has the benefit of the lower price tag, but should realize that it is basically the same watch as 50 years ago. I have to say that I have a slight preference for the charms of the old fashioned Speedy Pro with hand-wound movement, but the Dark and Blue Side of the Moon watches definitely are appreciated. I could see myself wearing it as a modern piece, as these are perfectly suitable for every day use, even during sports or camp site holidays.

Besides having the state-of-the-art Omega caliber 9904 movement, the other thing about this Blue Side of the Moon is that – as the name suggests – everything is in blue ceramics. The case, crown, pushers, bezel, dial and even the Moonphase disc is made of ceramic. The near and far sides of the Moon are on the ceramic dial using LiquidMetal technology, much like how the tachymeter scale is applied to the ceramic bezel. As you would have guessed (and expected, let’s face it), the folding clasp is also made of ceramic. Ceramic over titanium, for flexibility and strength. Putting this Omega Speedmaster Co-Axial Master Chronometer Moonphase ‘Blue Side of the Moon’ on the wrist is something special. The presence on the wrist is amazing, and especially in day light, the blue is really.. well.. blue. Inside, or in a place where the light is not as bright, the blue turns a bit darker. I have to say that I am more fond of the dark-ish tone of blue it gets in the shade or inside, than the intense color of blue that it has in bright sun light. But to each his (or her) own of course, I definitely recommend to try this watch first before you buy it unseen. 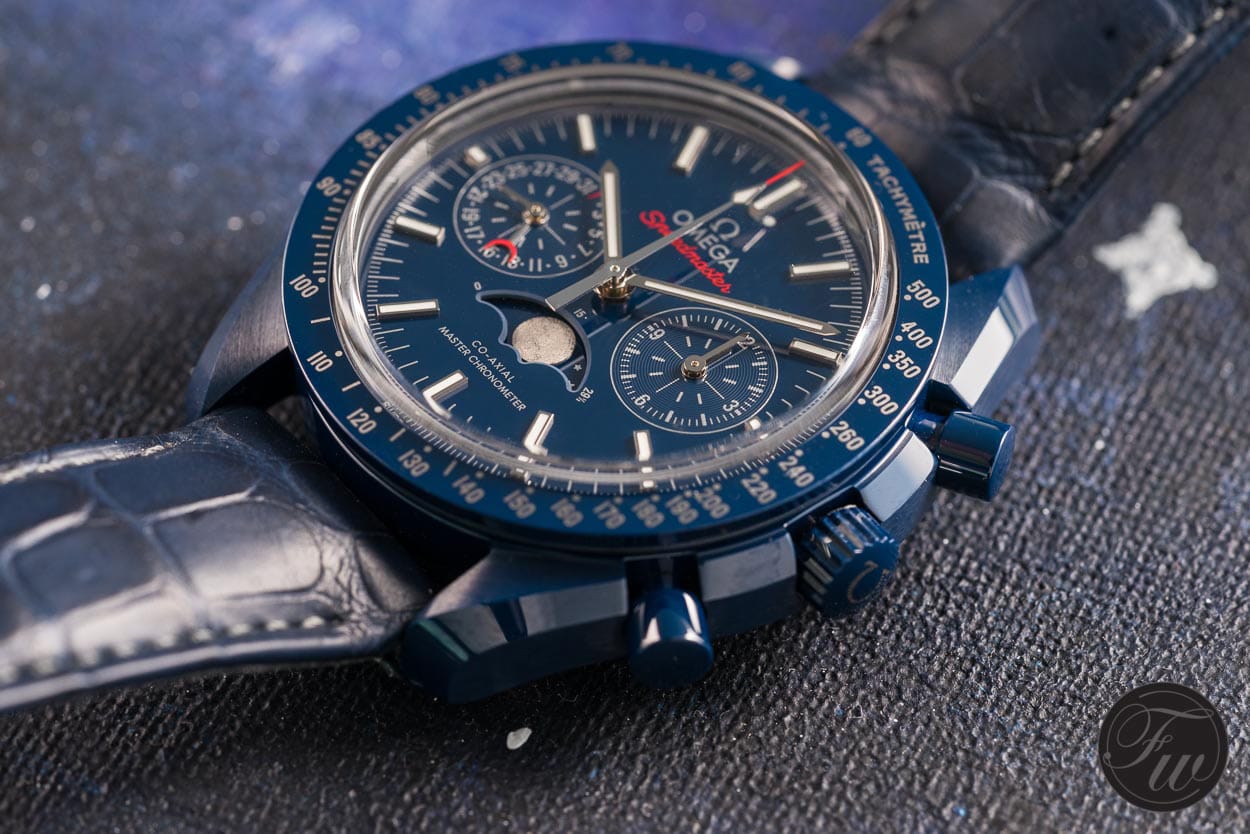 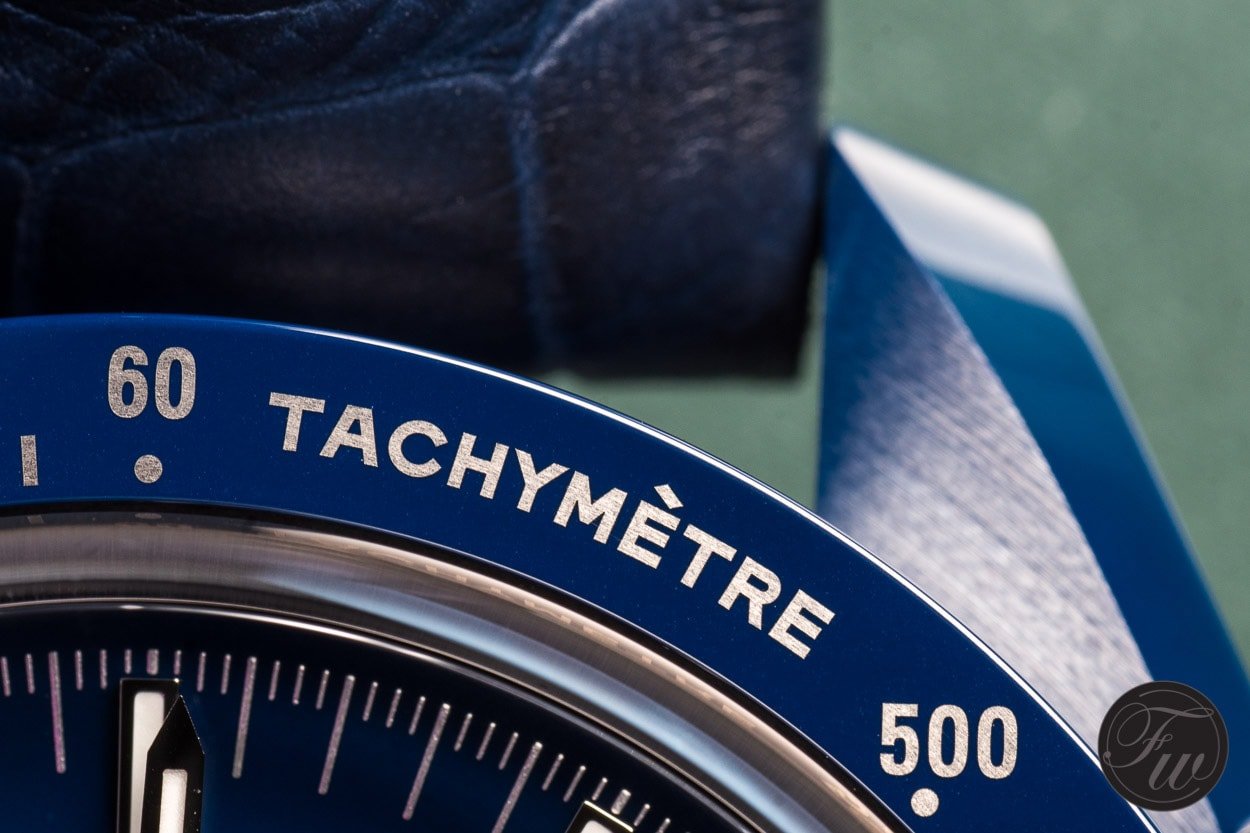 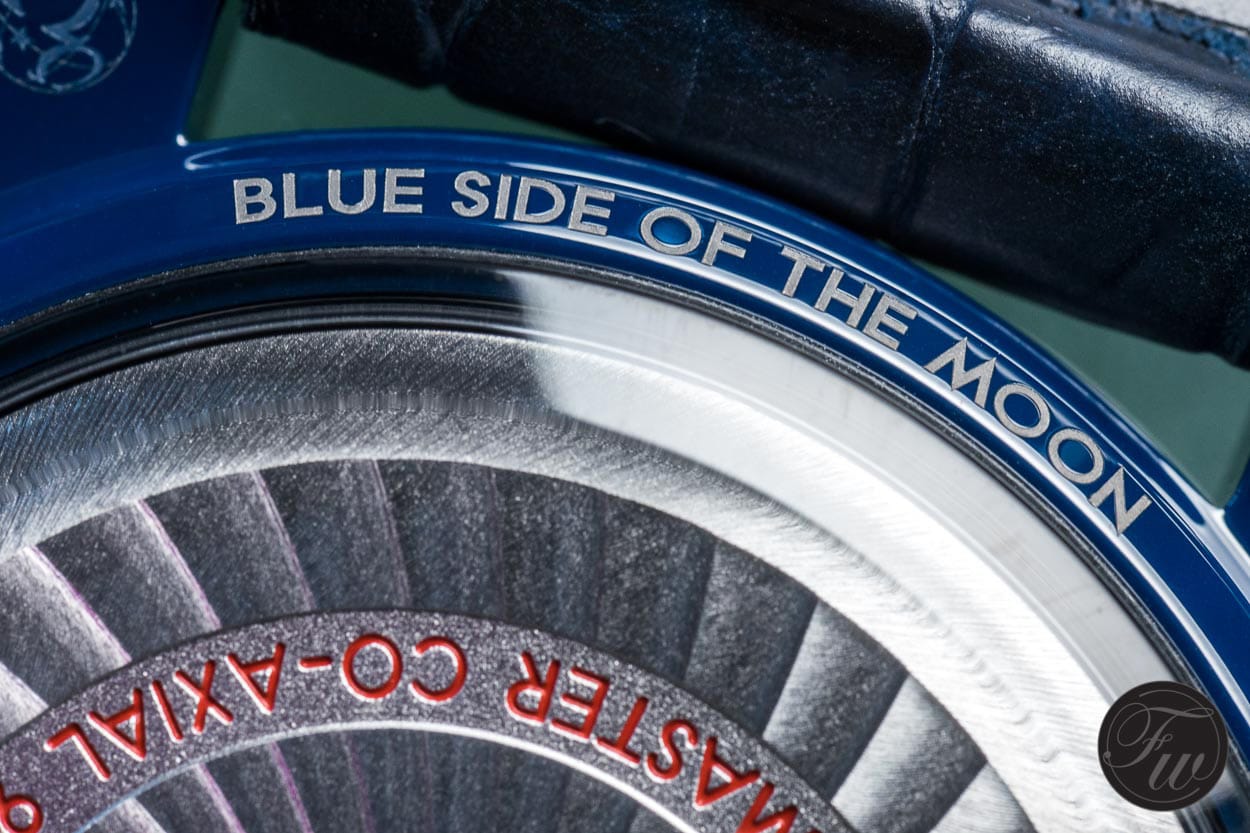 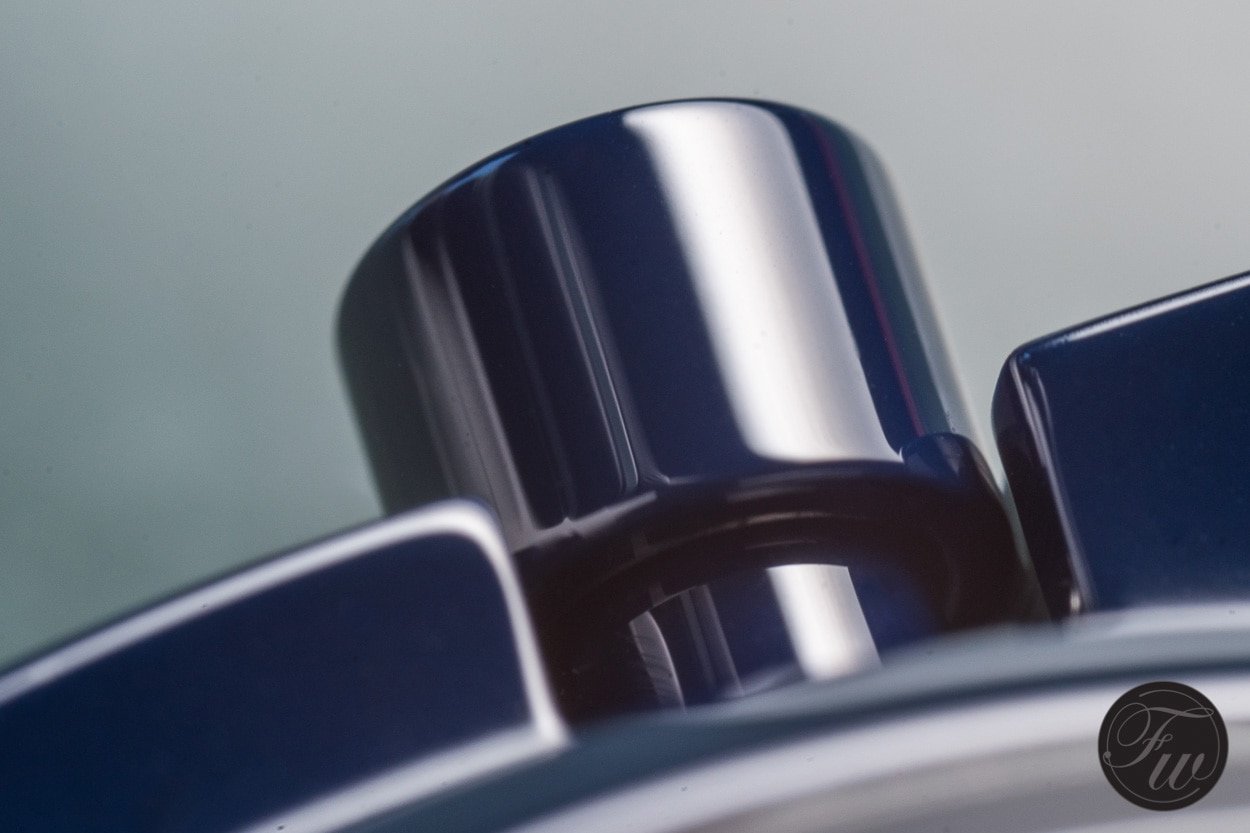 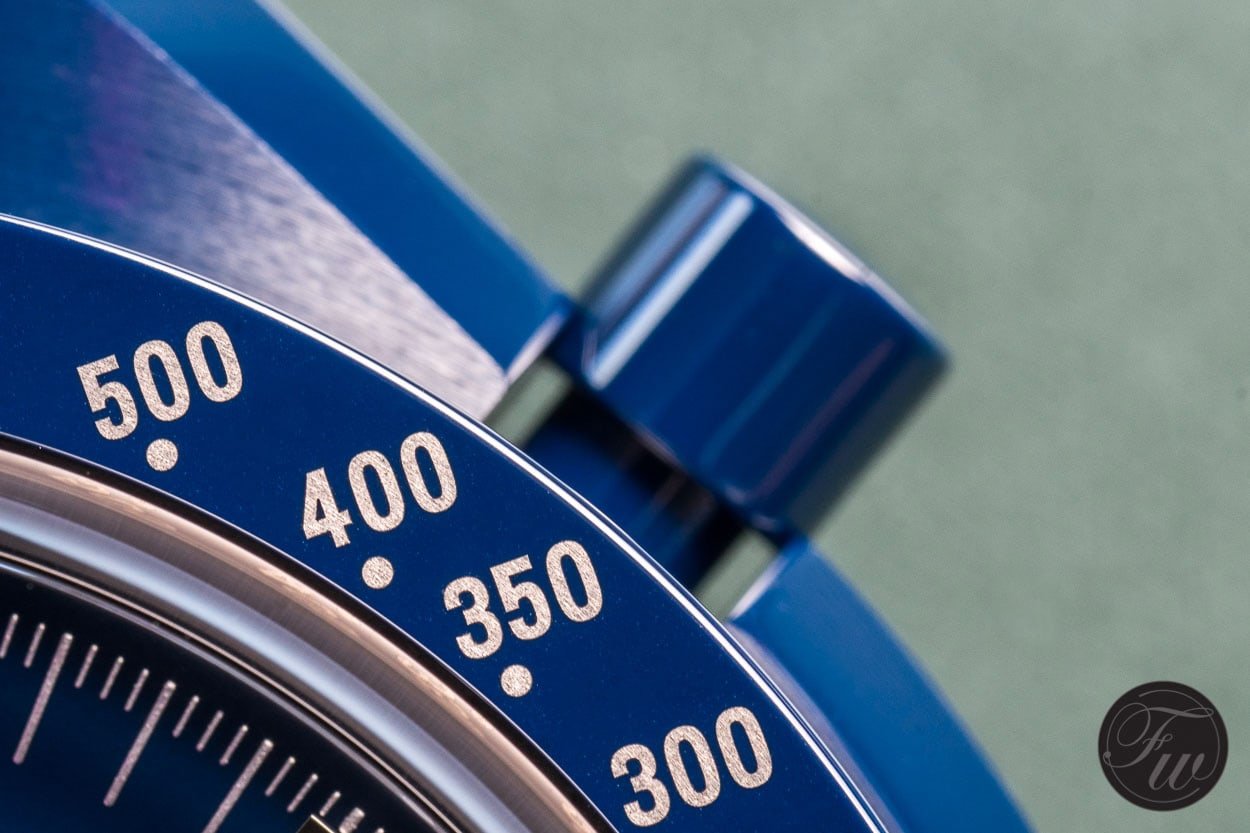 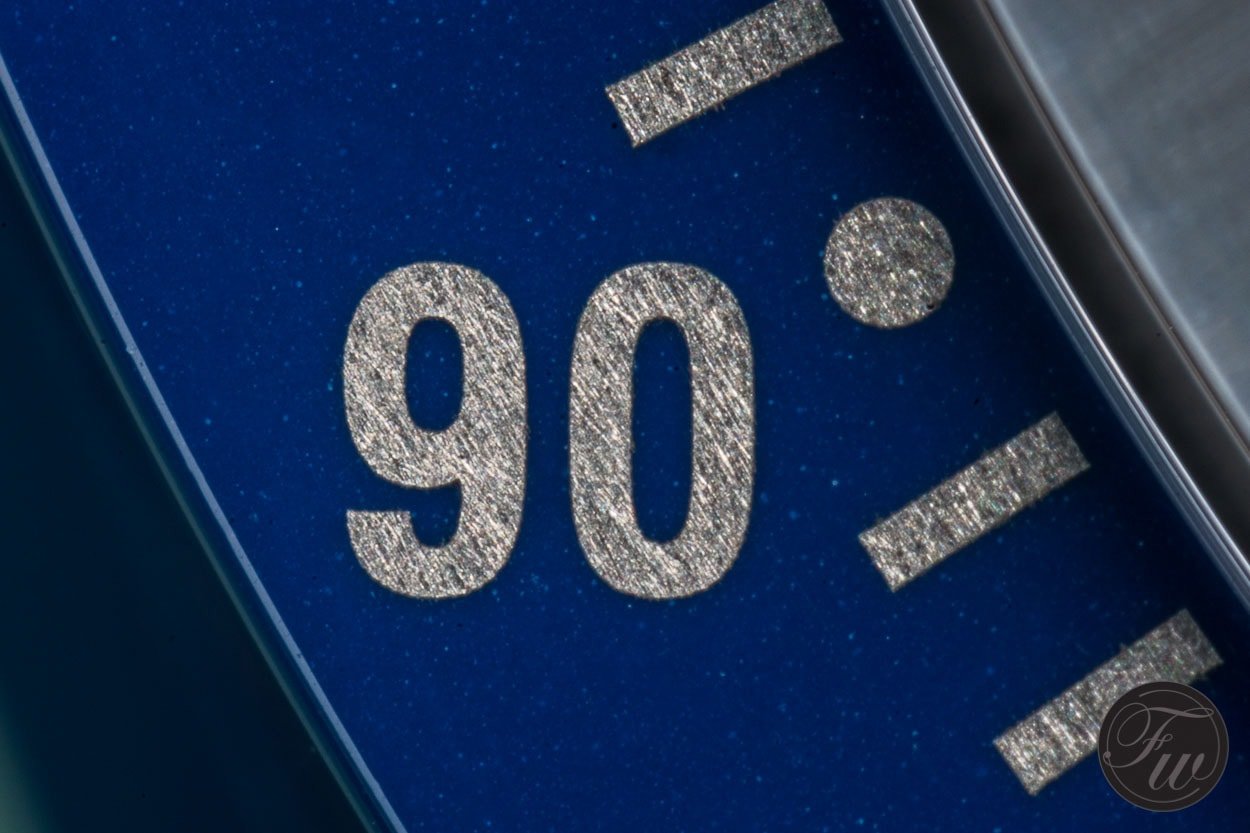 A Dial With Details

The dial of the Omega Speedmaster ‘Blue Side of the Moon’ is packed with nice detailed, without becoming too cluttered. There are two sub dials, one shows the hour and minute recorder of the chronograph (like all caliber 9×00 chronograph movements), the other shows the date and running seconds. The date indicator has a red ‘half Moon’ (or croissant, as some people call it). Red can also be found on the tip of the chronograph seconds hand as well as the word ‘Speedmaster’ written on the dial. The 18 carat white gold hands and hour markers give a nice contrast to the blue ceramic dial. The best detail, of course, is the moon itself. On the moon phases aperture at 6 o’clock, you see the ceramic moon phases disc that has two Moons (far and near side of the Moon), in LiquidMetal. Bert did some macro shots of the dial and especially of the Moons. Have a look. 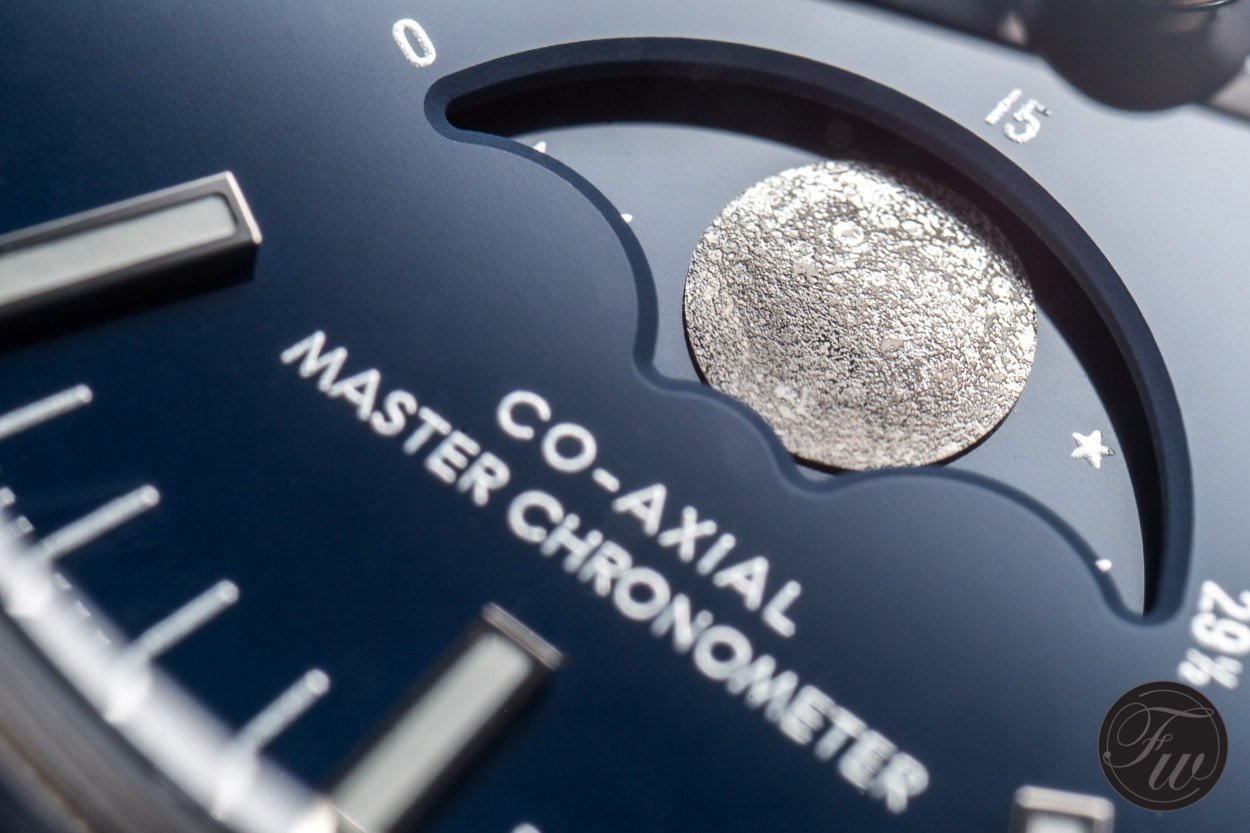 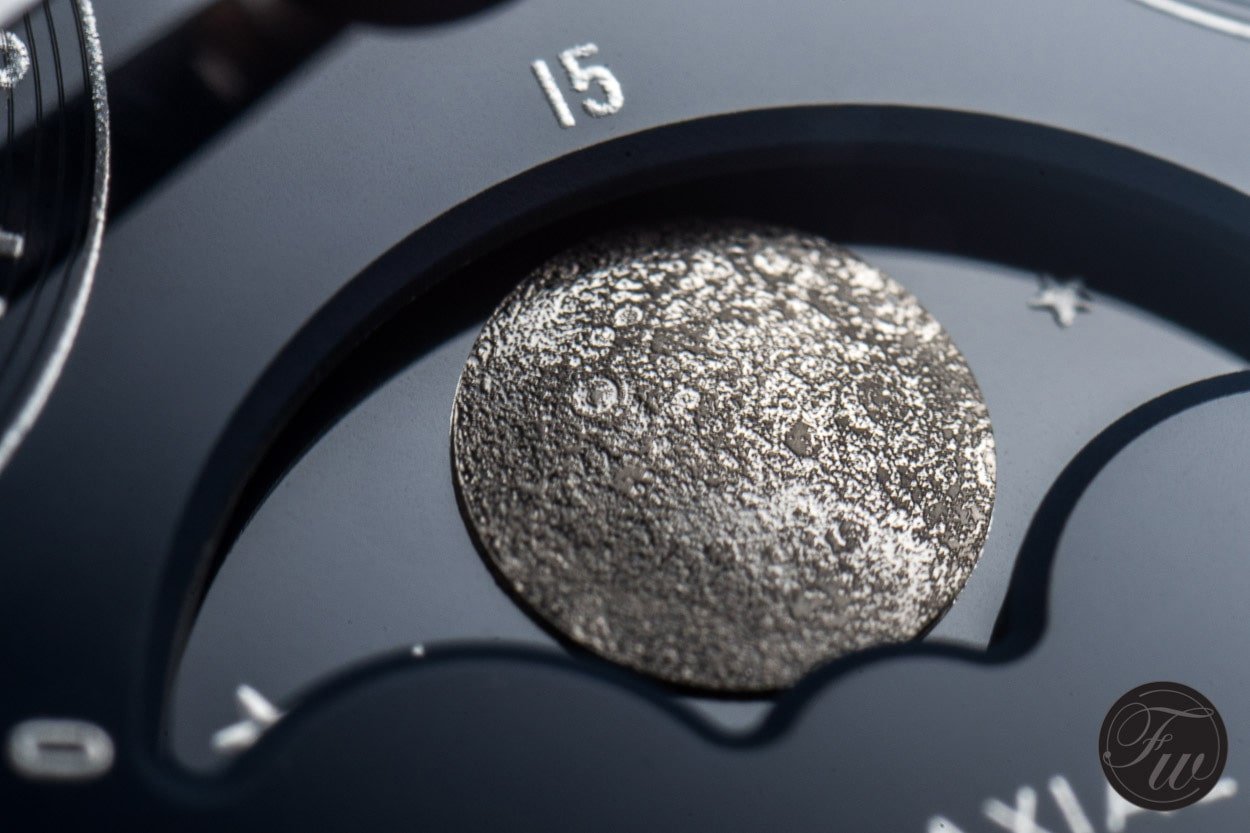 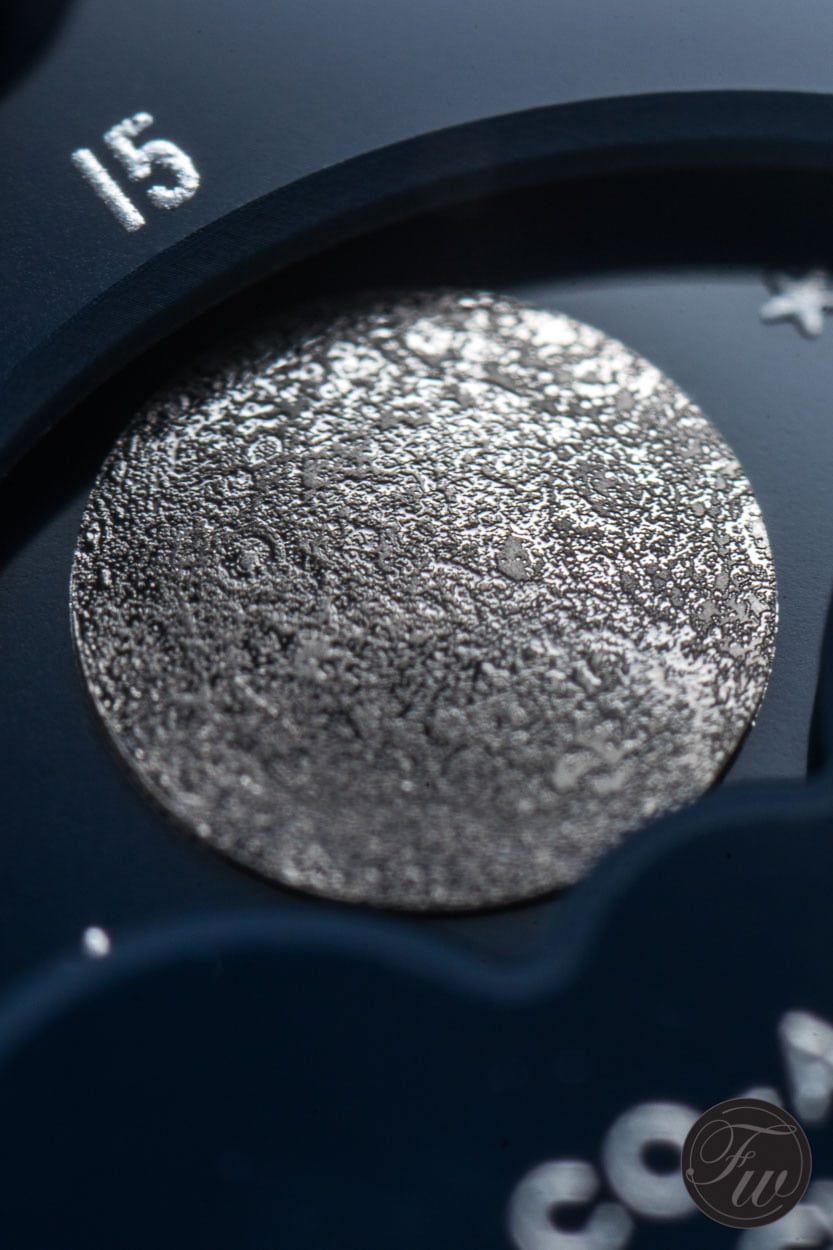 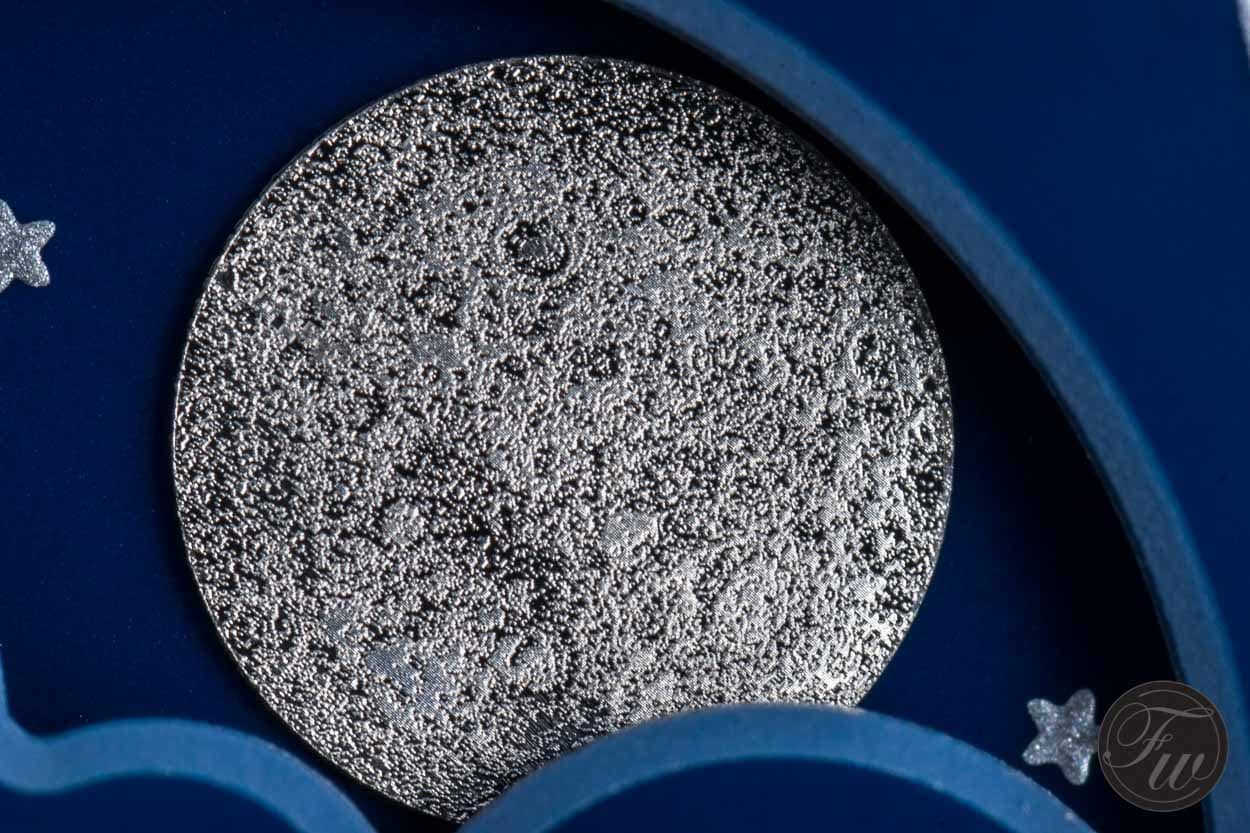 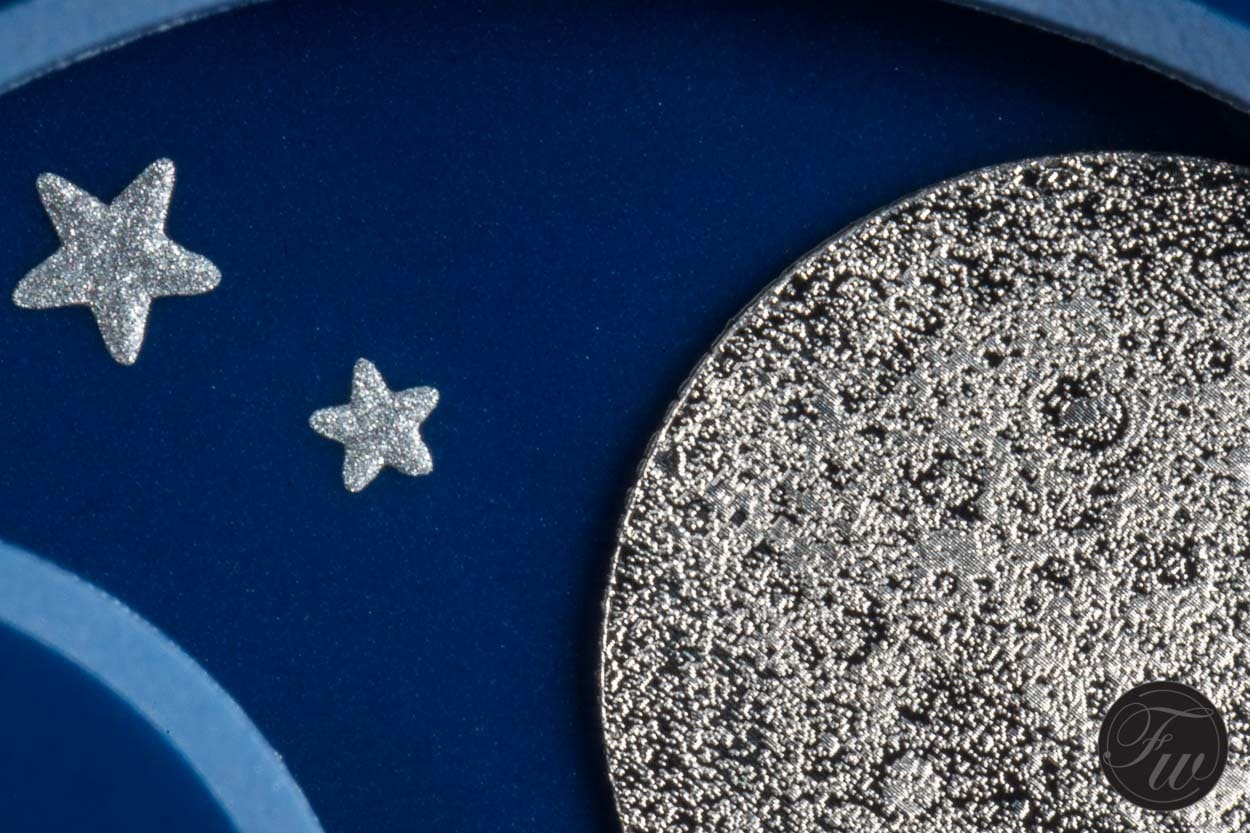 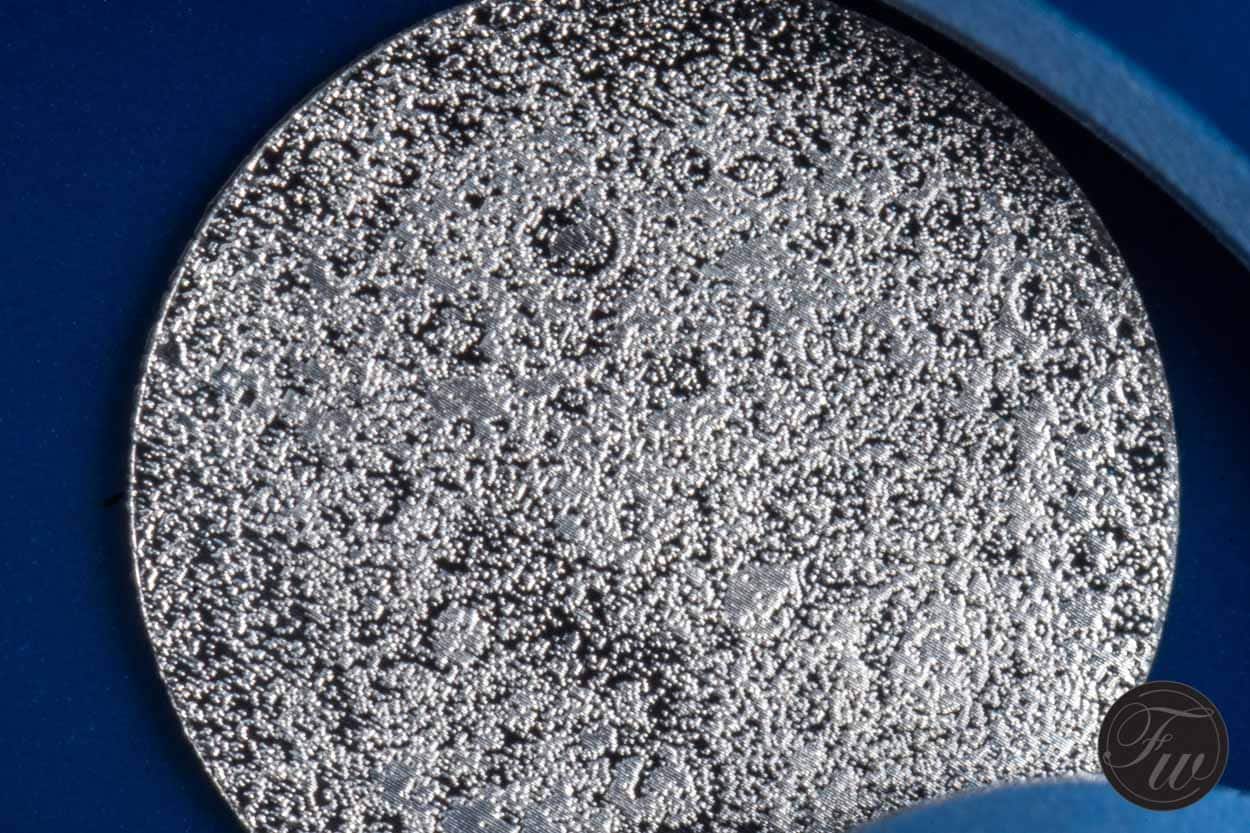 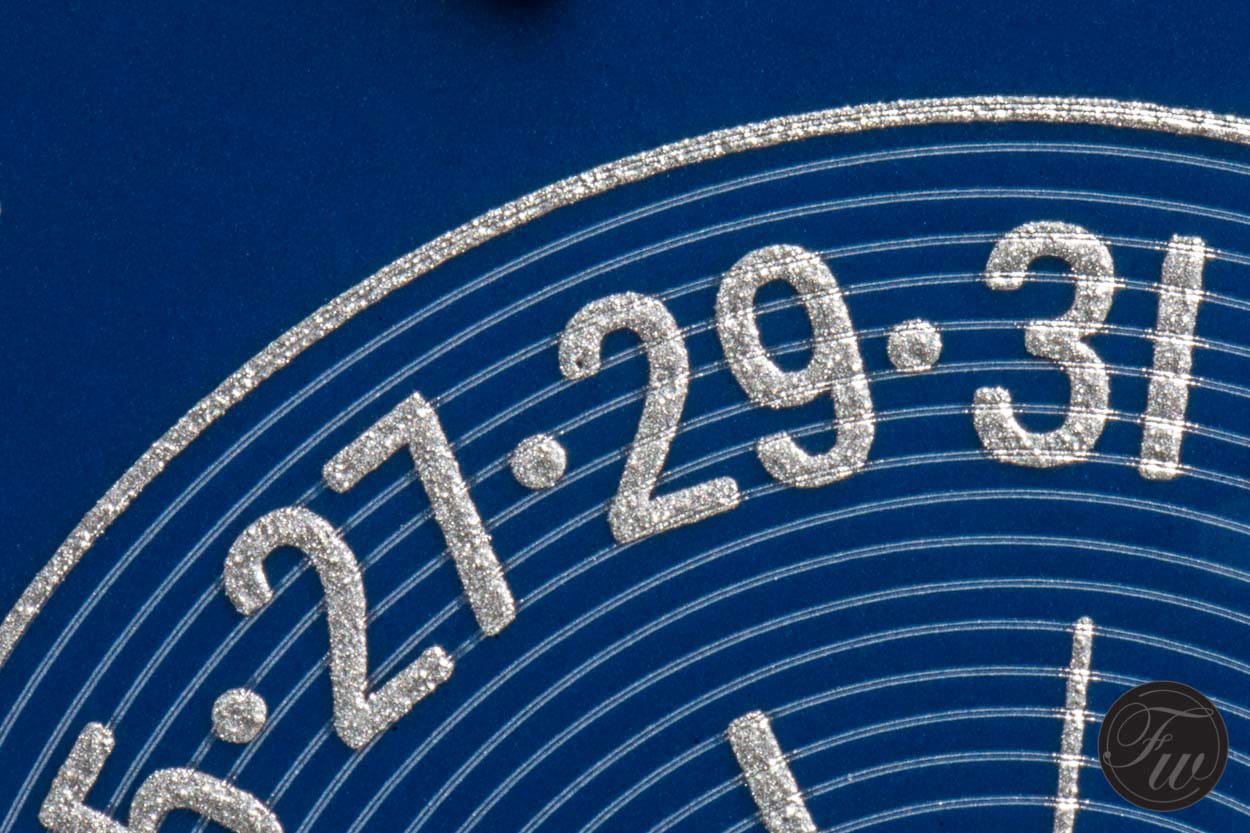 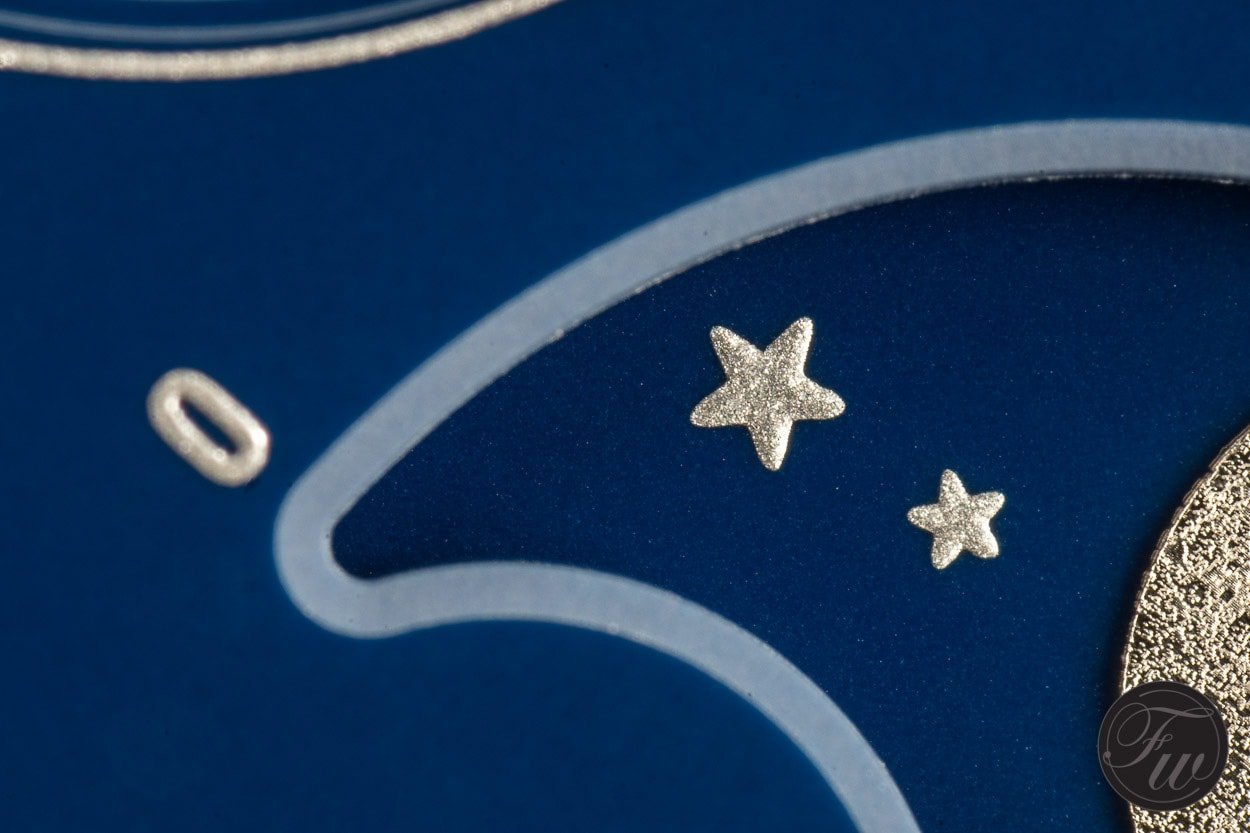 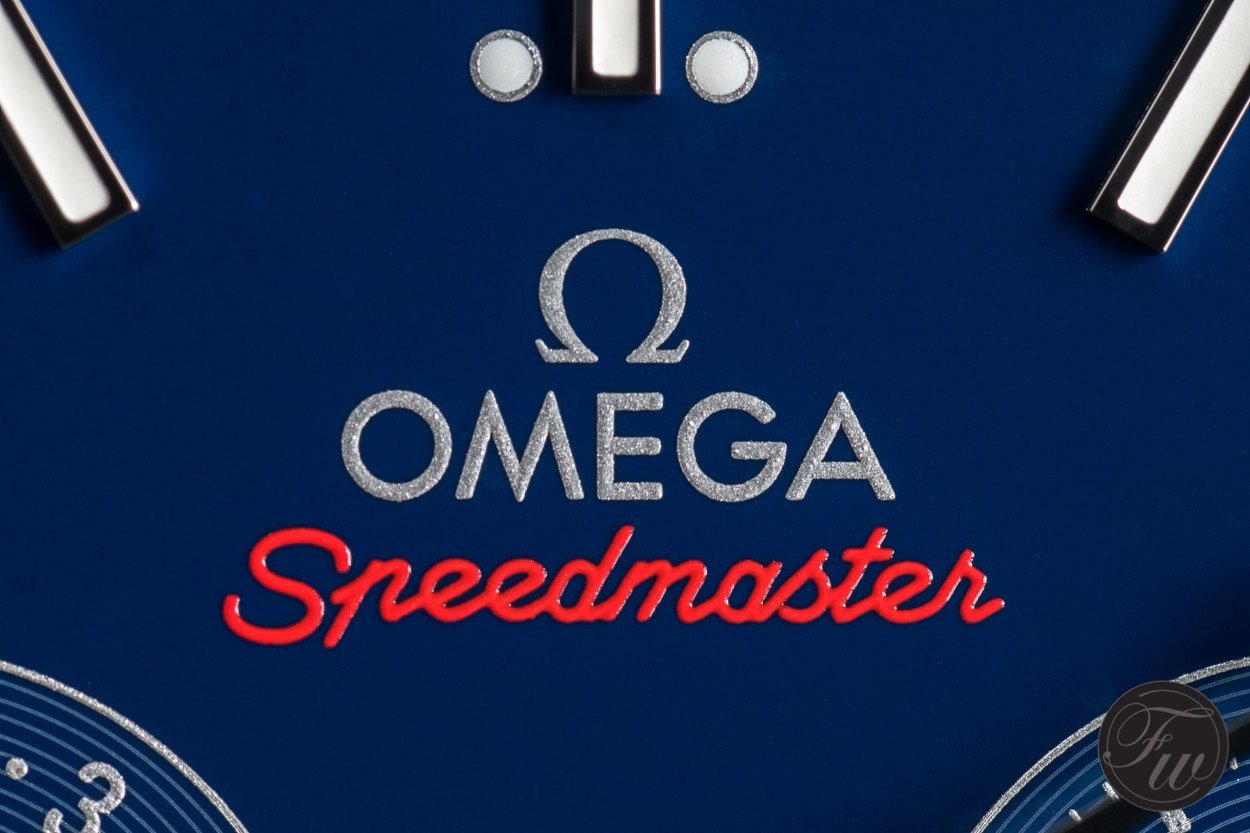 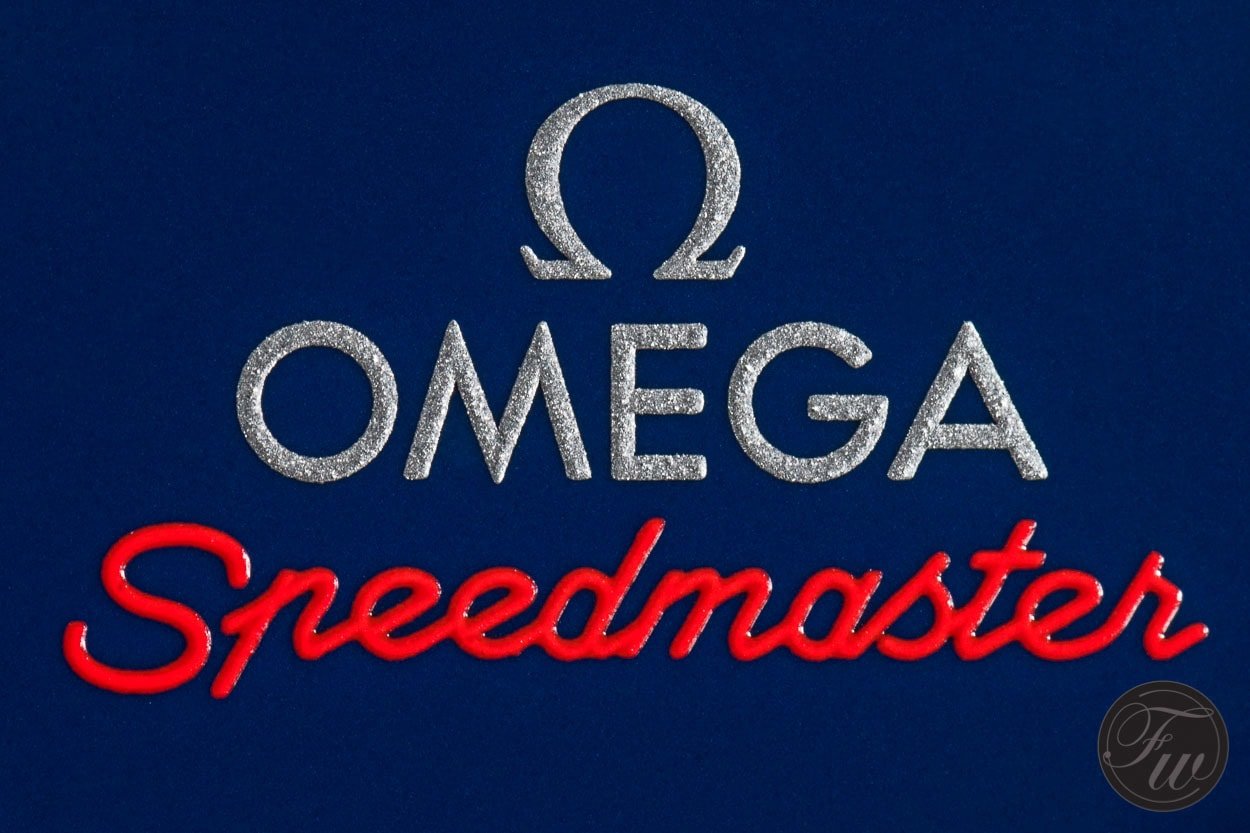 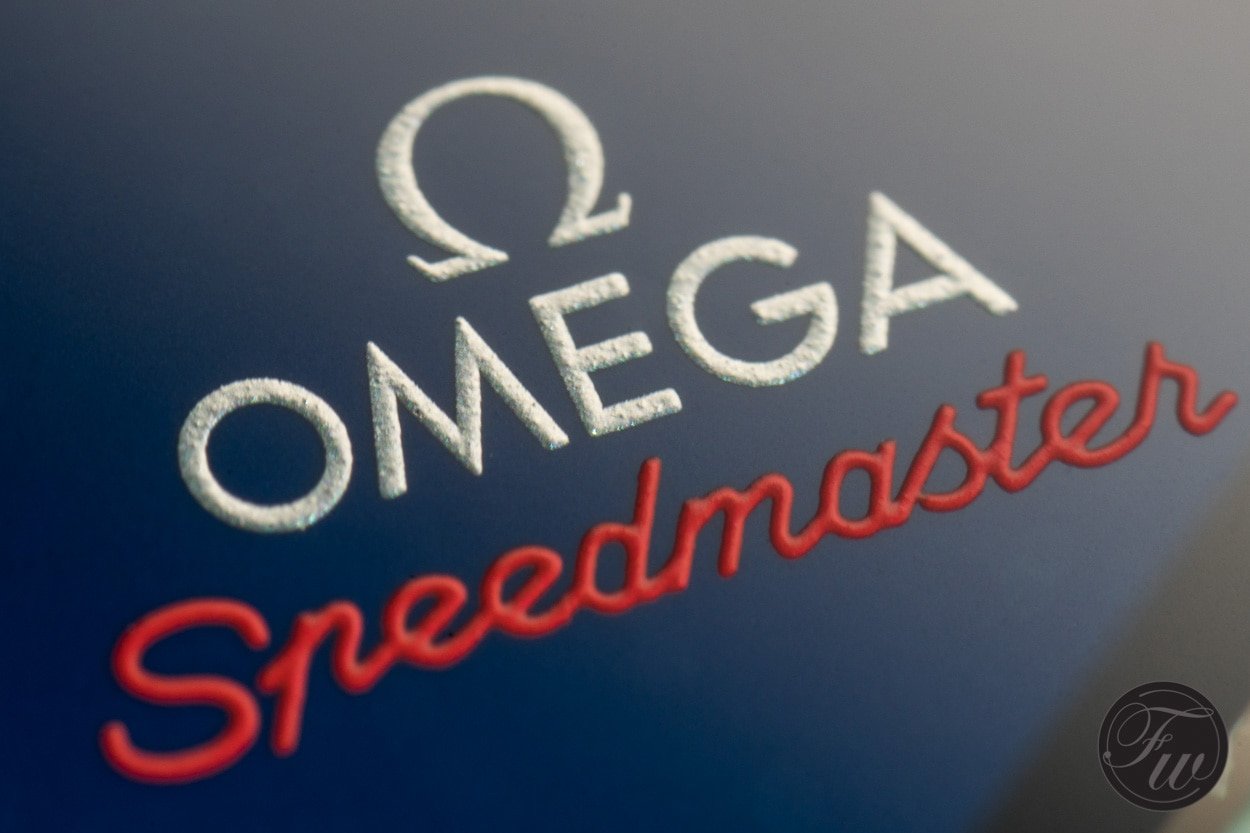 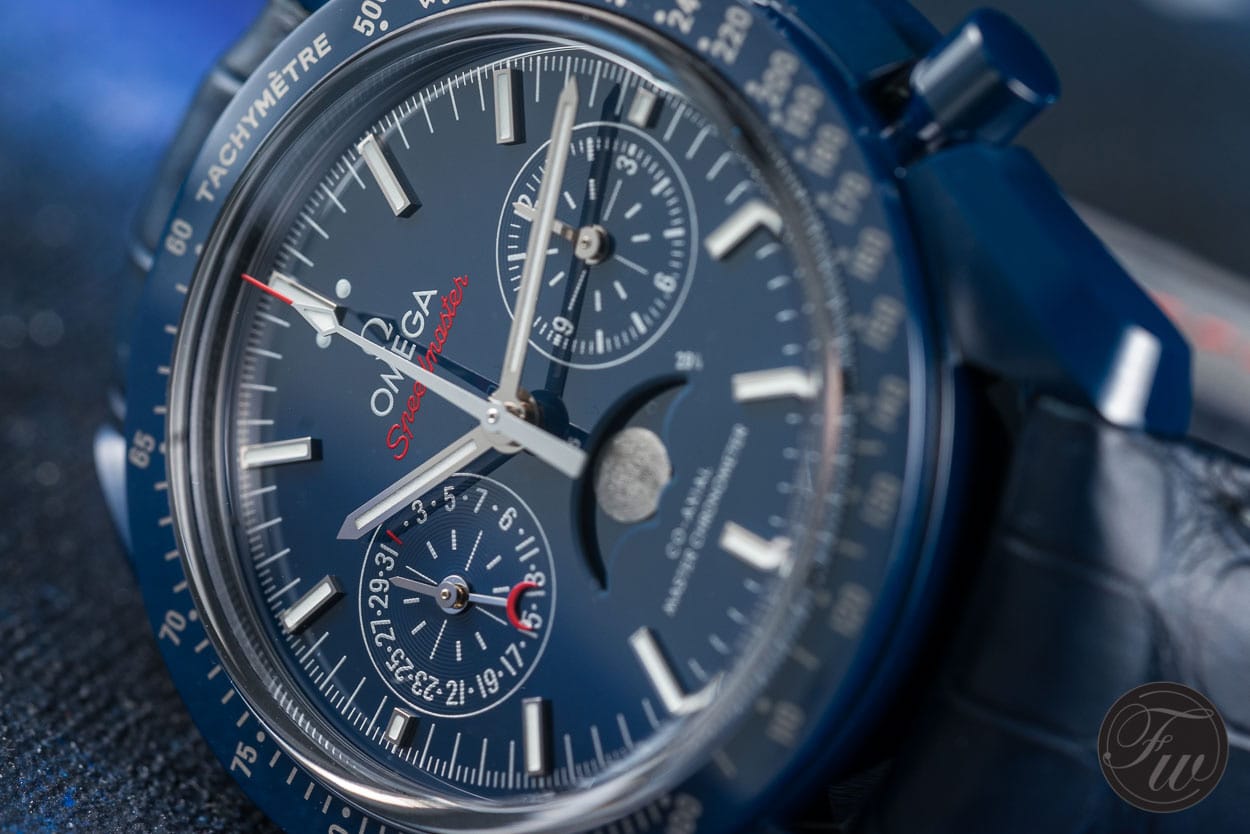 That all said, the price tag of the Omega Speedmaster Co-Axial Master Chronometer Moonphase ‘Blue Side of the Moon’ 304.93.44.52.03.001 is €11.800,- (including sales taxes). That’s a serious amount of money, but it is also a very serious watch. It probably won’t please many of the Speedmaster Professional ‘Moonwatch’ collectors and enthusiasts, but those who love a modern wristwatch with a moon phases complication and appreciate the blue tones should definitely give this a try. The 44.25mm case is very pleasant on the wrist and the sapphire caseback gives a great view on the in-house caliber 9904 Master Chronometer movement. This model is also available in stainless steel, gold & steel, gold (yellow and Sedna) and platinum (click here for the article we published on the Pt950 version).

More information, including the official retail price for your country, via Omega Watches on-line.