Before I begin telling you all about my personal everyday carry essentials, I first want to give you a little bit of context. My relationship with the idea of EDC has always been a somewhat tumultuous one with two sides to it. One side consists of the objects that I carry on my person, and the other is what I carry with me. To me, carrying around a lot of gear is certainly not synonymous with happiness. Nothing beats the feeling of a summer day when you leave your phone at home, carrying nothing with you but your wallet and house keys. That said, I seem to have picked the wrong job for someone who enjoys minimalist, unburdened freedom. As a watch journalist, you have to be well equipped. And as you’ll see, despite my best efforts, I end up lugging around quite a bit of gear.

In some way, I see my kit as a minimalist’s take on something which is almost necessarily maximalist. This can be proven by the fact that I use almost every single piece of gear I have with me every day. Nothing is there for the sake of being there. Whether on the job, on my commute, or even when I travel, the contents of my bag remain largely the same. Either way, I hope this inside look at the things I carry with me (almost) every day — other than a watch — will be as interesting for you as it has been for me to see those of RJ, Lex, Gerard, and George. Without further ado, let’s get started with the cornerstone of any good EDC — the simple yet all-important bag. 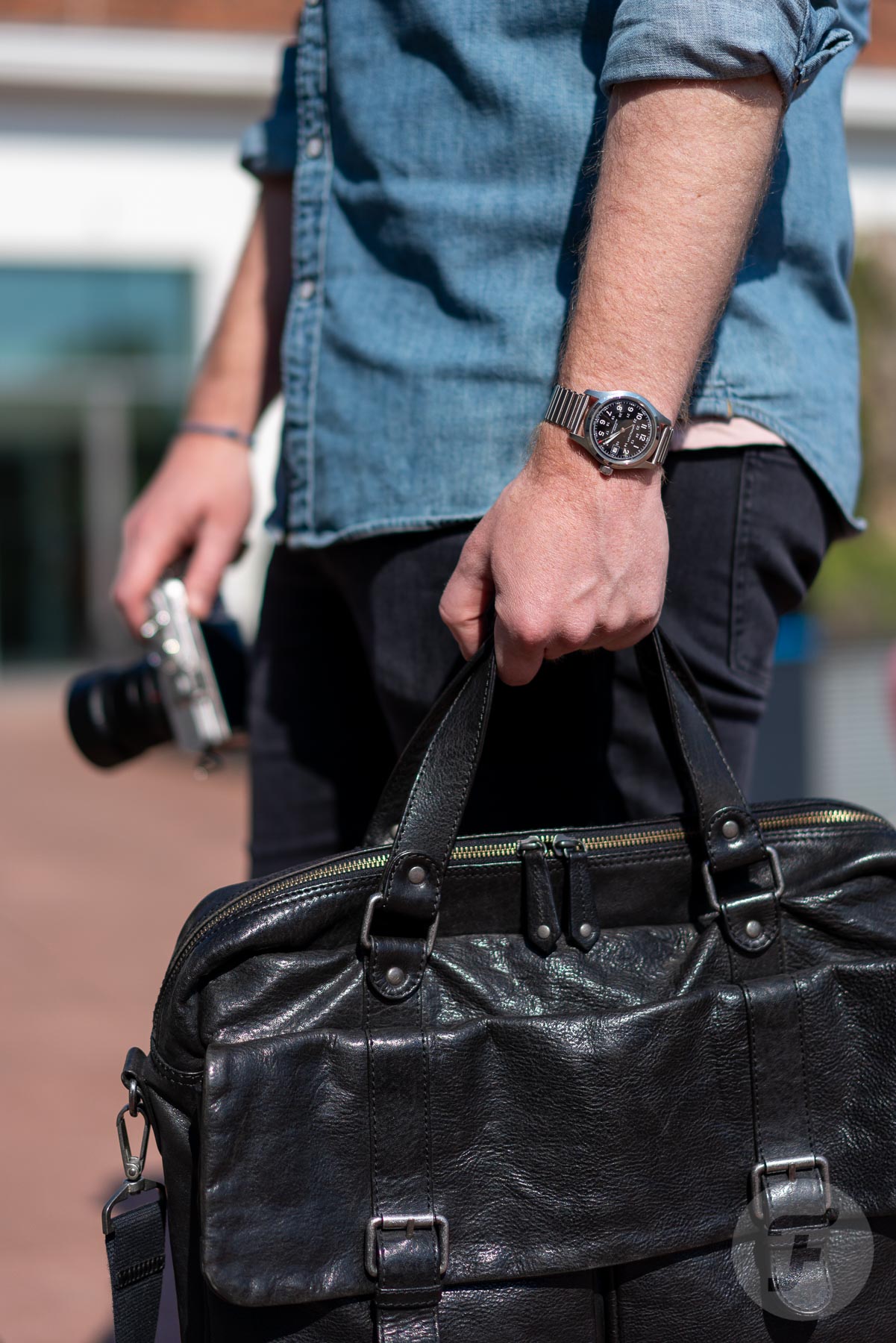 A good bag is not something that anyone should take for granted. It’s a make-or-break element of the EDC. You can have all the gear in the world, but without a bag to carry it in, you’re out of luck. The issue is that not all bags are created equal. And it’s this overwhelming diversity that can make it quite difficult to pick just one. But as soon as you set a couple of criteria, it’s easy to narrow it down. My bag of choice, and a significant upgrade to the backpack that came before it, is a black leather carryall from the Spanish designer brand Adolfo Dominguez. It meets all the requirements I look for in a bag, namely, the fact that it’s very versatile. Whether on my daily bike commute in a pair of jeans or dressed up at a press event, it never looks out of place. 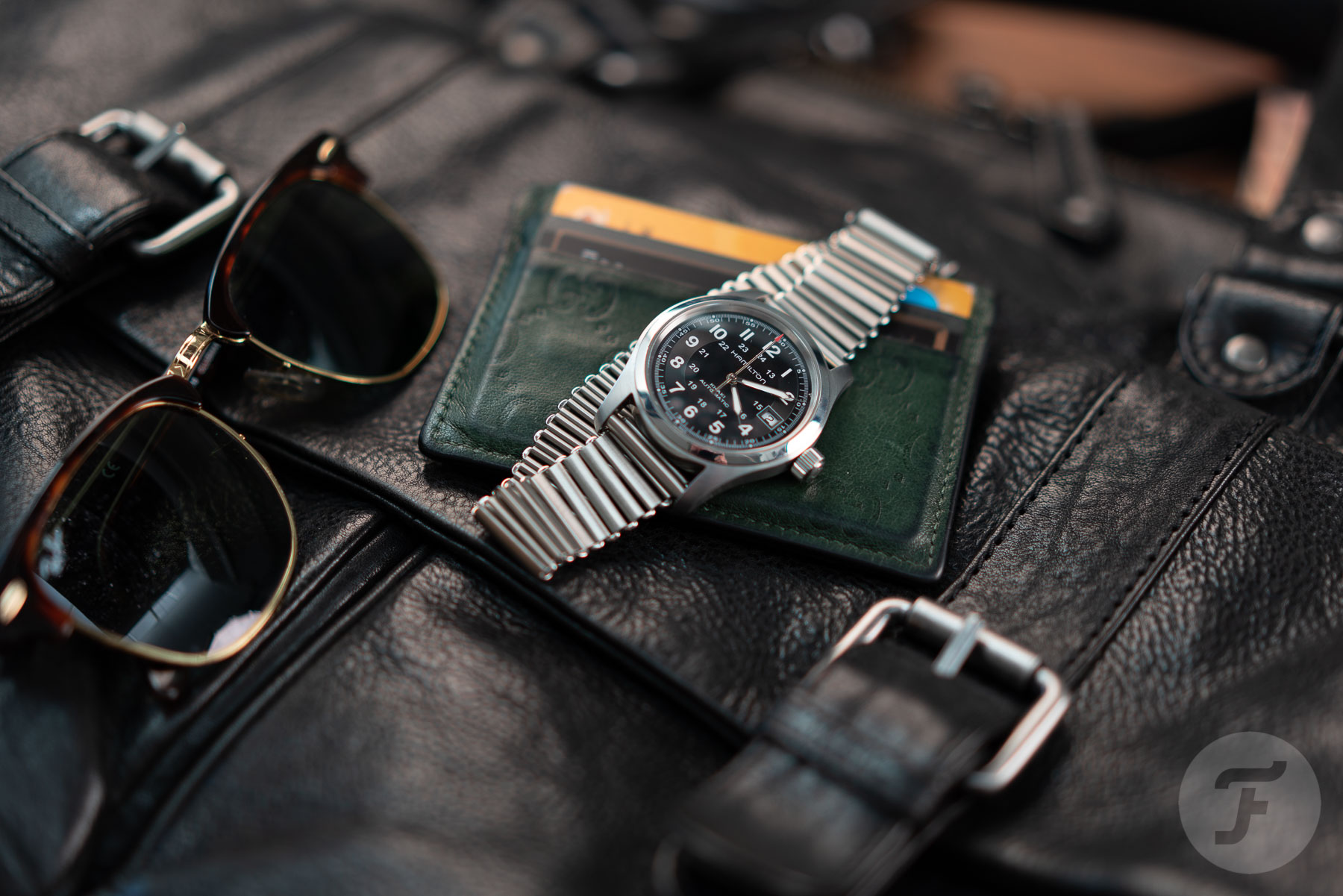 Not only that, but it comfortably holds my MacBook Air, camera, lens, notebook, charger, and all of my other essentials. Now, before we continue, I want to talk about designer brands. I don’t subscribe to the hype or status-marking nonsense surrounding designer brands. You’ll notice, however, that a couple of my EDC items are from such brands. To me, the important aspect is the quality of these products. And sometimes these pricier options deliver the quality that I want for the items I use every single day. That said, without an exception to date, all of these items have been bought secondhand at a fraction of their retail price, something which doesn’t make them any less useful or long-lasting. My Adolfo Dominguez bag (bought on Vinted for €35) is no exception to this. 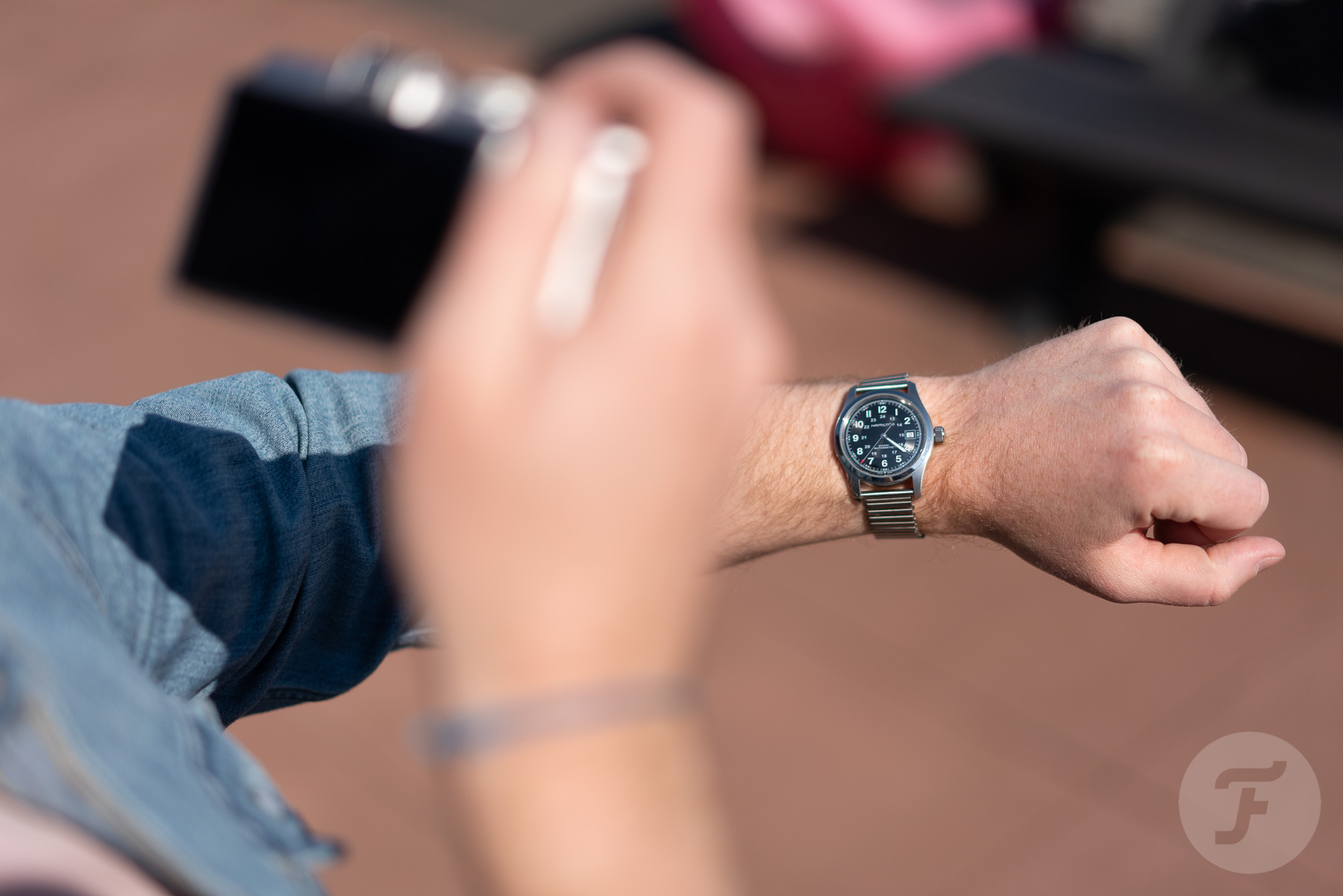 I often get questions (primarily in my Instagram DMs) about the camera and lens(es) that I use. The short answer is that I use an Olympus Pen E-PL8 coupled with both an Olympus 45mm f/1.8 and a Panasonic Lumix G 25mm f/1.7 (as well as an Olympus MCON-P02 macro converter). The story behind my choice was that I wanted to have a camera that would be small and versatile, and that would allow me to send pictures directly to my phone to edit in Lightroom and post on Instagram. My phone being a Xiaomi Red 8 with a shockingly bad camera, this was my solution for creating decent pictures to share on social media. Buying a new phone would also have been an option, but I genuinely enjoy photography, and no phone’s camera can beat the feeling and results of using a real camera. 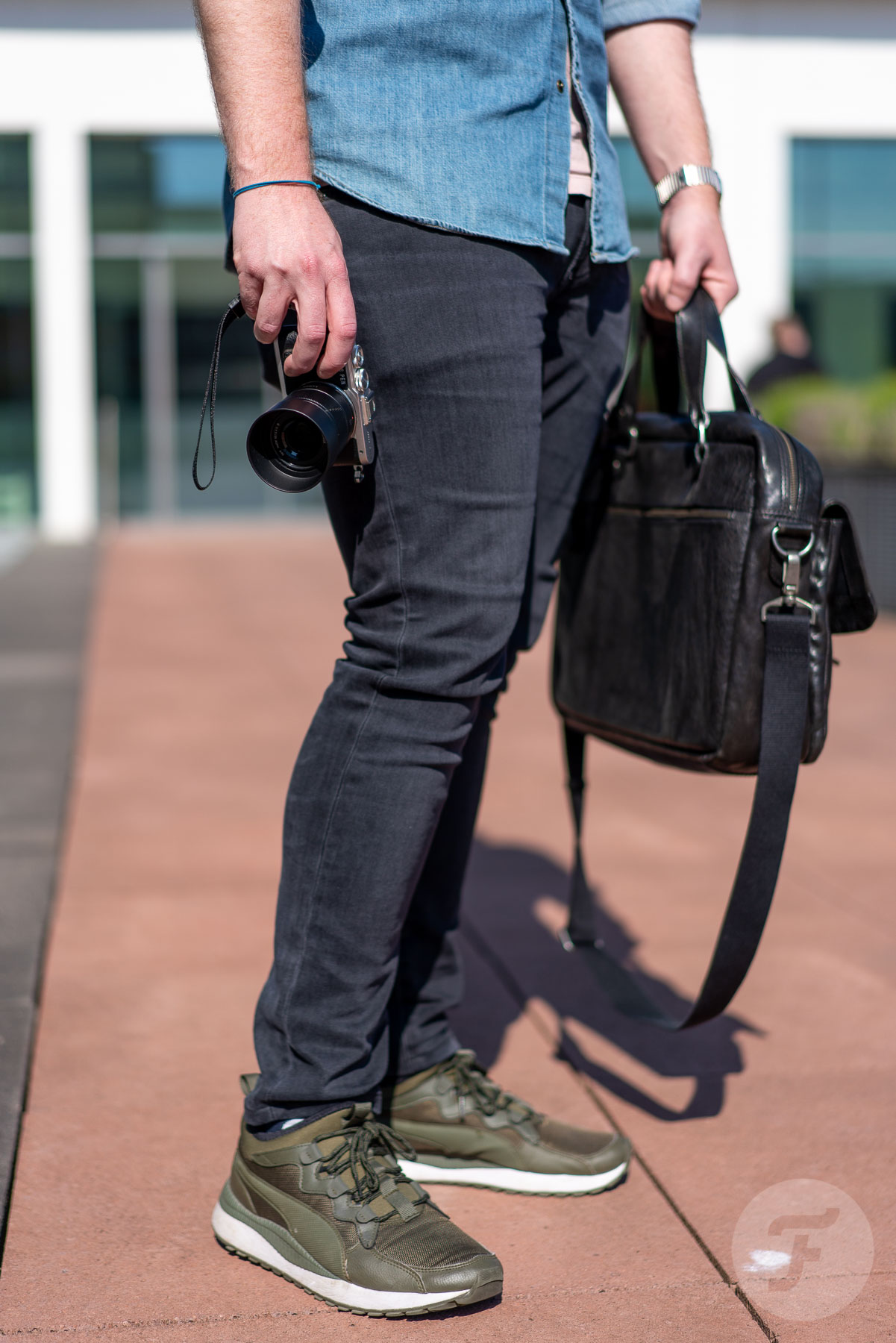 So, as I often do, I bought the Olympus E-PL8 used (for just €170, I believe). It was a total game-changer. It’s small enough to fit in a coat pocket, it’s intuitive to use, and it takes incredible pictures. For Watches And Wonders earlier this year, I was given the option to use RJ’s Sony A7 and tried it out. But somehow I ended up back with the Olympus. The Panasonic Lumix G 25mm f/1.7 was a recent (and unforeseen) addition to my gear, as the kit lens broke on a press trip to Stuttgart. The versatility of the 25mm lens (which translated to a 50mm on full-frame) has quickly made it my favorite option. That said, I still go back to the 45mm from time to time, especially coupled with the macro adapter. To me, the E-PL8 is portable camera perfection, and I’d happily recommend it to anyone. 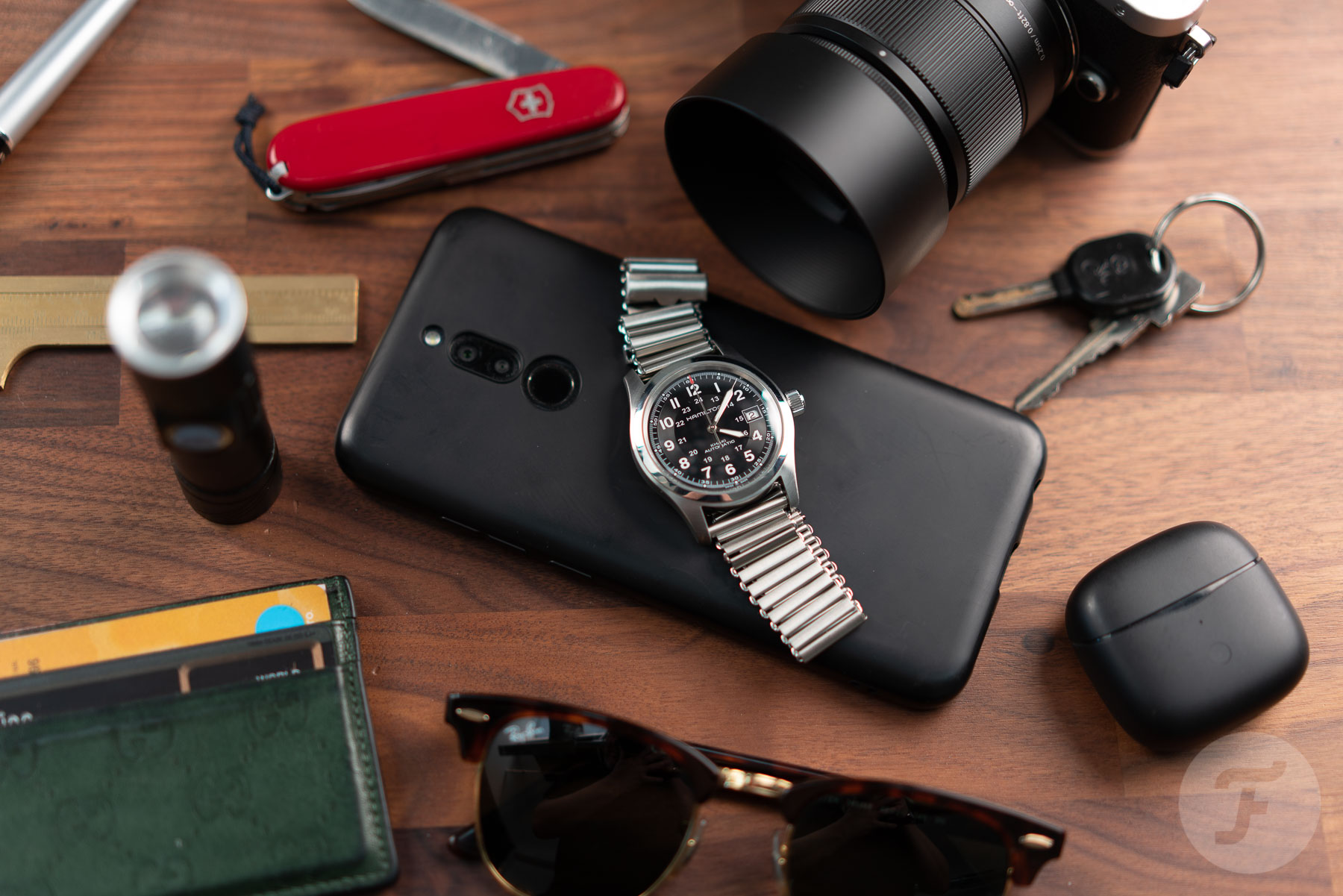 Other everyday carry essentials from Ray-Ban, Gucci, and Swiss Army

Now, I’ve mentioned most of my EDC already, whether directly or in passing. Other than my bag, camera, laptop, and phone, there are plenty of smaller accessories that I always have with me. Some are pretty banal, such as my house keys or my green Gucci card-holder-style wallet (another secondhand purchase with longevity in mind). But others are rather useful in my daily workflow and perhaps not as obvious. I’m talking about things like the small USB-rechargeable UV torch that I carry with me for activating the lume on watches (there’s no better way to take a lume shot). There’s also a small brass caliper for measuring watches accurately. Then there’s my Swiss Army knife. This is never actually on my person and lives on top of my desk, but it’s used almost every day for opening packages and the like.

The last two items in my EDC are also rather basic, but they certainly see their fair share of daily use and abuse. The first of these is a pair of AirPods-style Bluetooth earphones from a brand called SoundPEATS. The model I have is the Air3, and as someone who has never tested the real deal, I have to say, these are pretty great. The sound quality and functionality are both fantastic, and they pack into a tiny charging pod. Last but certainly not least on my EDC list is a good pair of sunglasses. Pictured in this article is a pair of Ray-Ban Clubmasters that I only wear from time to time. My usual shades are a pair of black Wayfarers. I was never much one for aviator-style sunglasses, so Wayfarers were a clear choice for me, and they have proven to be as comfortable as they are versatile. 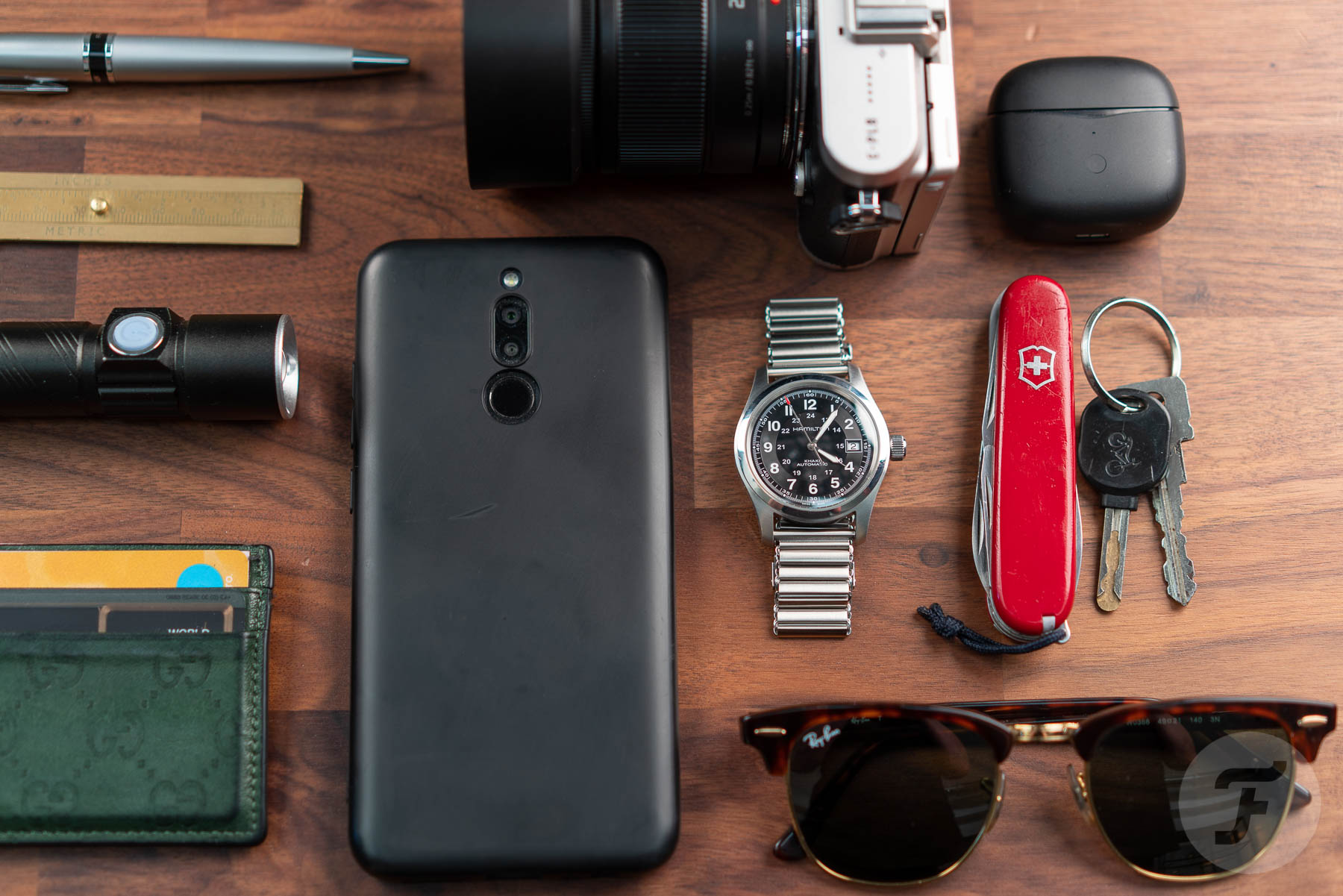 There you have it, my dear Fratelli. I hope you enjoyed this rundown of the many items that make up my everyday carry essentials. To me, it’s always interesting to see how people address the needs that we all tend to have in unique ways, and how they use these objects to also express themselves as we might with our clothing or watches. In a way, it’s no wonder that people who are thoughtful and detail-oriented enough to appreciate the craftsmanship put into mechanical watches also look for that in other daily-use objects. So far, this series seems to be confirming this, and I hope you are enjoying reading it as much as we are writing it.

As always, share your thoughts on my EDC or the EDC topic in general in the comments below. And if you have any questions about any of the objects pictured, feel free to ask them below as well.