In the second installment of our watch-exchanging mini-series, I’m taking RJ’s Omega Speedmaster 3594.50 Replica for a spin. “Replica?” I hear you say. Yes, Replica, because back in 1997 when the model was first launched, that word did not have the bad connotation it has now. And to be fair, the Replica is some sort of replica of the very first Omega Speedmaster, the 1957 CK2915. I cherry-picked the Replica from RJ’s vast collection of “Speedy” goodness. I had tried it on before, but this time, I got to wear it for a while longer.

Why did I pick the Speedmaster 3594.50 Replica when I could have picked something gold, something Snoopy, or something 321? Because the Replica is the Speedy that sings to me. I have nothing but respect for the Speedmaster Professional, but that respect is generally a rational thing. There’s no denying the Moonwatch is an undisputed watch legend, but it’s almost like how I feel about The Rolling Stones. They’re one of the all-time greatest bands, I know, but I don’t feel it that way. Play me a Beatles song, though, and there’s a good chance the hairs on the back of my neck will stand up. I know what I’m writing here is borderline blasphemy, but it’s how I feel. There’s nothing else to do but pray for RJ’s forgiveness. Maybe singing praises to the Speedmaster 3594.50 Replica will grant me that. 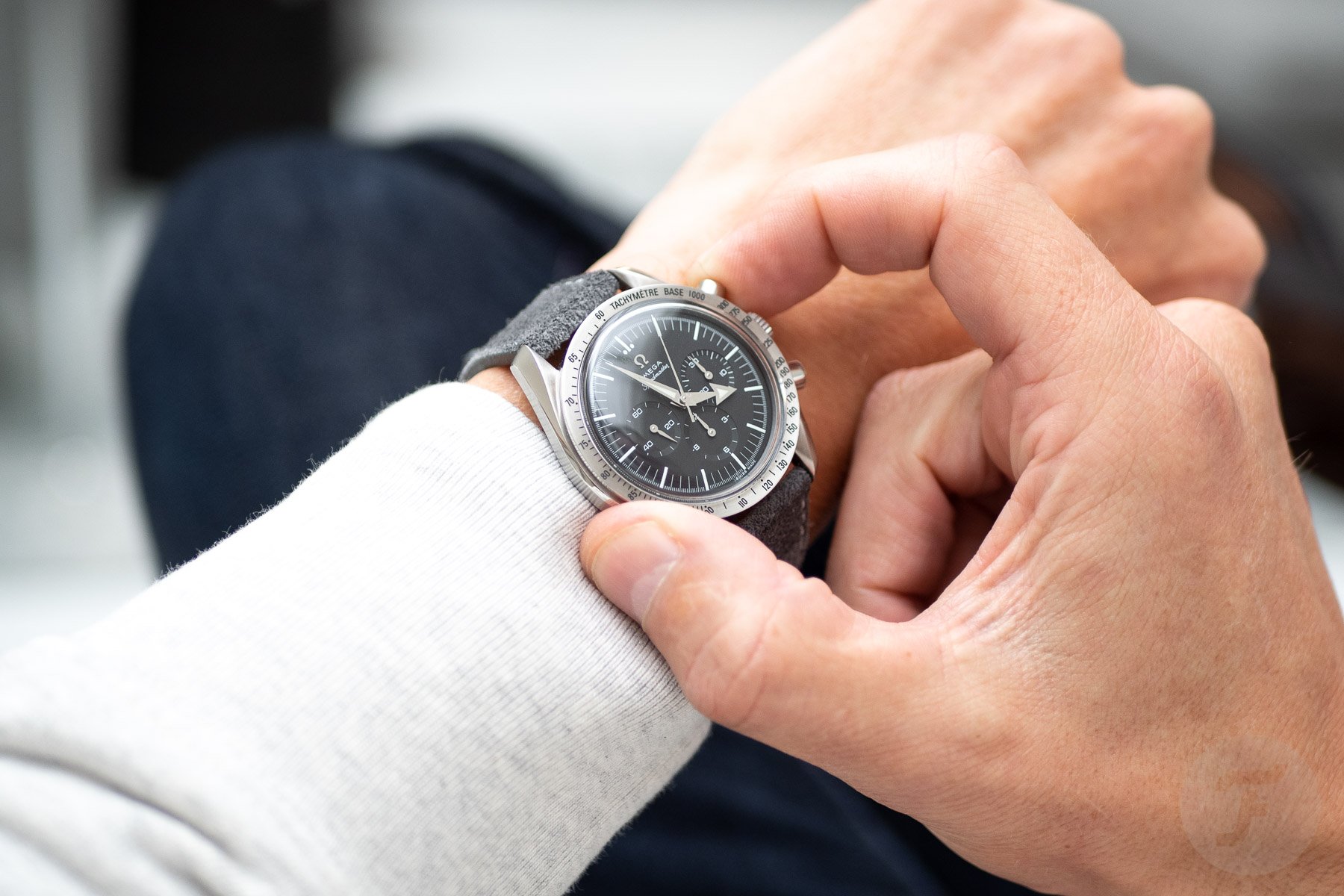 Let me wear that one…

The difference between me choosing RJ’s Speedy and Daan wearing my Grand Seiko SBGX341 is that the latter kind of happened spontaneously. Daan was wearing his fabulous Oris Artelier Art Blakey Limited Edition that day, and we could have just swapped watches. But why keep it simple when we could make it more complex, right? So I thought of trying on something I already had my eyes on for a while. Yes, that Speedmaster with the steel bezel and the firm Broad Arrow hands… 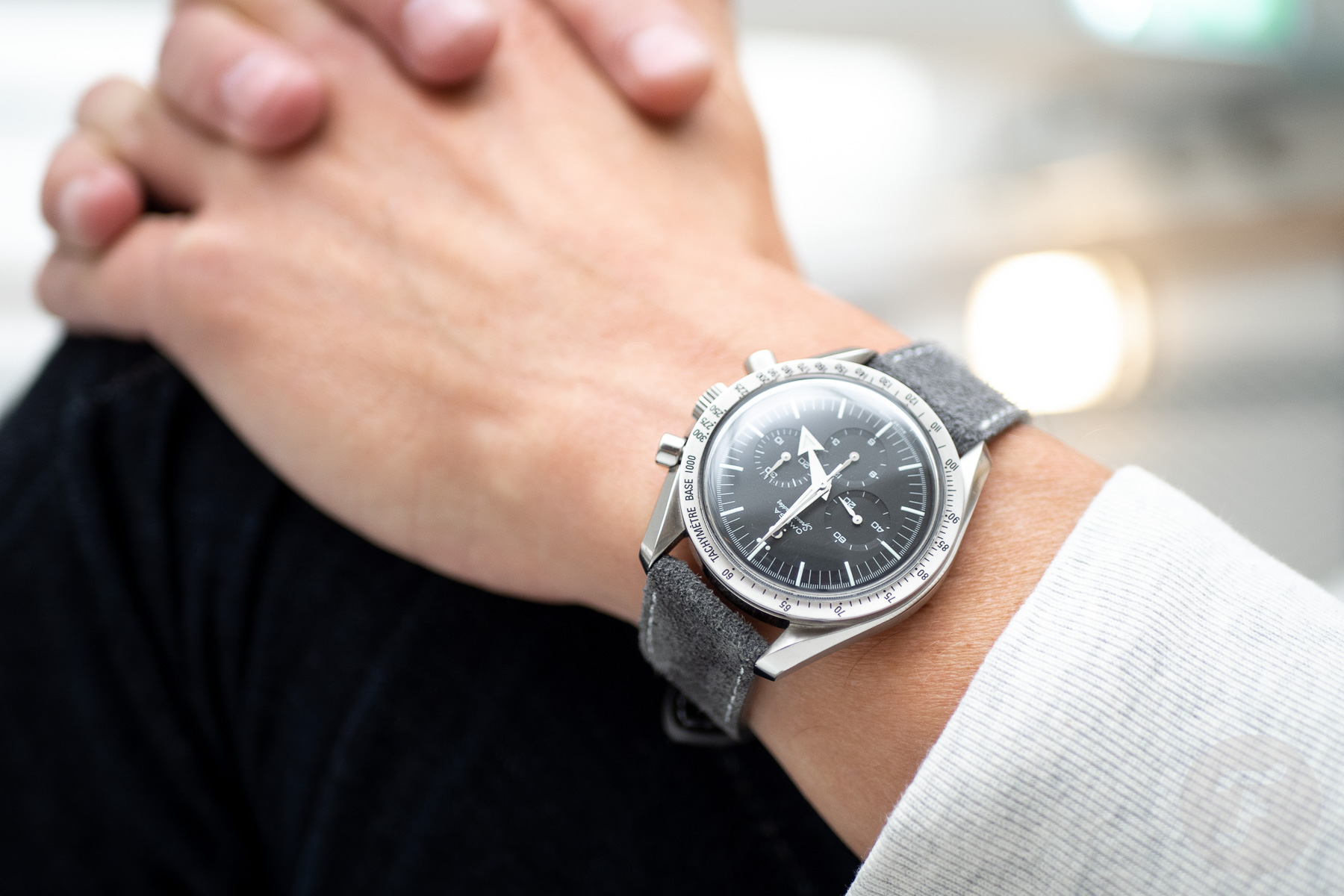 Talking about RJ’s Speedmaster 3594.50 Replica is a delicate matter. That’s because the watch celebrates his first Father’s Day. It was a gift from both his wife and his daughter, and you can read a bit more about that here. But because I picked this particular Speedy from his collection because it is the most intriguing and interesting one to me, I think I will be fine. The first time I tried on RJ’s Speedy Replica, it was outfitted with a light blue Marine Nationale strap — a pretty rad combination. But this time, when I took RJ’s special briefcase from the safe to help myself to the Replica, I found it with a brown leather strap attached. Nice, most definitely, but I thought it would even look better or more “me” on a gray suede strap — you can, of course, tell me what you think in the comment section below (the gray strap can be found here).

In my opinion, the gray strap works so well because of the color of the dial. If you look closely, you will notice that the dial is not black but a very dark shade of gray. Combining that dial with a gray strap brings out the true color in a subtle and sophisticated way. 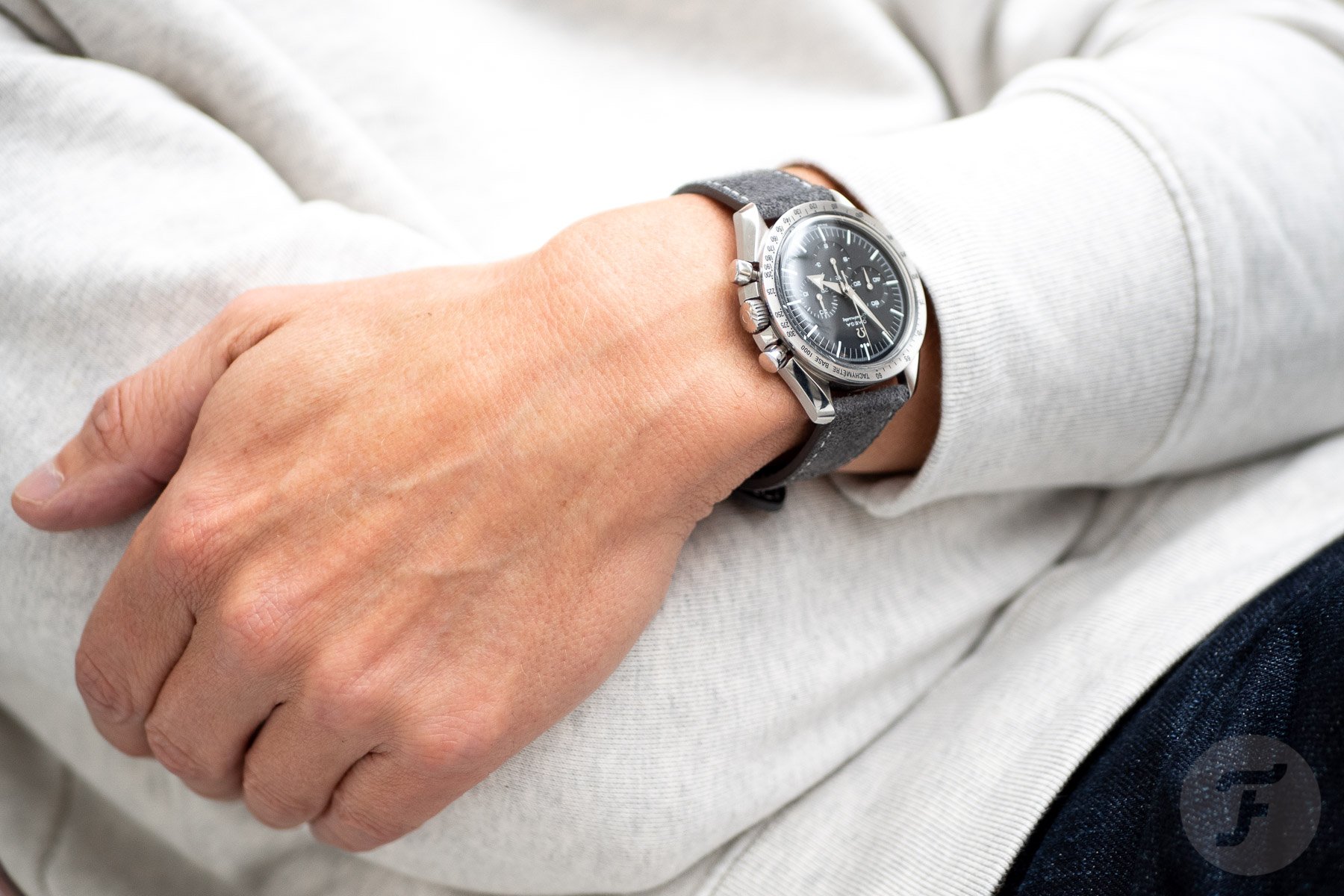 I can do without the standard black bezel

You might think that a clean steel bezel would be boring compared to a black one. I don’t think so at all. The plain steel bezel is neither dull nor unnotable, and I think I know why. The bezel visually links to and matches the Broad Arrow hands. Those polished hands catch and reflect sunlight spectacularly, but they’re not flashy. It’s the way the metal matches with the deep gray dial that makes the Speedmaster 3594.50 Replica unobtrusively spectacular. And apart from the biggest differences with more regular Speedy types, the Replica also has a few other nice details. For instance, there’s an applied logo and a Hesalite crystal, a combo you won’t find in the current Speedmaster range. And inside the asymmetrical 42mm case with crown guards — not the original 38.6mm case of the CK2915 — beats the trusty hand-wound caliber 1861; no surprises there. 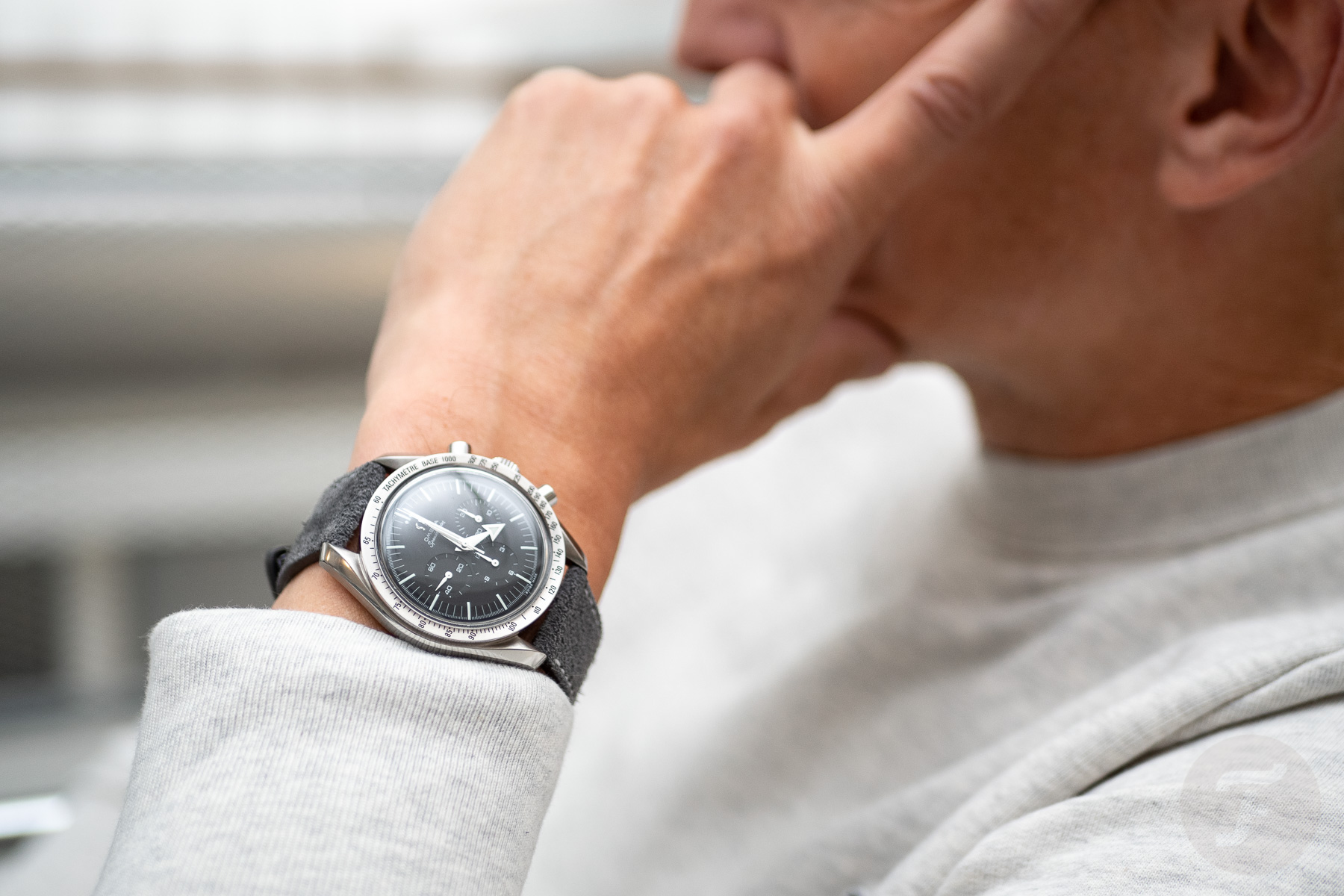 Since I mentioned the 38mm case of the original CK2915, it might be a good idea to explain why I prefer the Speedmaster 3594.50 Replica over a few other Broad Arrow Speedmasters. There is, of course, the 2017 Speedmaster ’57 311.10.39.30.01.001 with its 38.6mm case. This 60th Anniversary tribute based on the original Speedmaster — a 3,557-piece “limited” edition — is just too brown for me, way too “fauxtina” for my liking. I don’t mind the size at all, and I also do like the historically correct straight-lug case. But to be honest, I just like the bigger asymmetrical case better. Is the 60th Anniversary model a more accurate interpretation of the CK2915 than the 42mm Speedmaster 3594.50 Replica I adore? For sure, but it’s the mix of different styles that makes the Replica a perfectly balanced watch.

Another Speedmaster that takes its design cues from the very first of its kind is the Speedmaster Broad Arrow 3551.50.00, which debuted in 2002. The “problem” is that the 42 × 14.5mm watch was outfitted with the self-winding Co-Axial caliber 3303. Yes, it had three sub-dials like the original Speedy, but it also had a date at 6 o‘clock. The newer/updated version is the Speedmaster ’57 Co-Axial Master Chronometer Chronograph 332.12.41.51.01.001. The case now measures 40.5 × 12.99mm. Proportionally, this watch is better than the automatic from 2002, but there are a couple of elements I can’t get over. Yes, you guessed it, the black-dial version has too much “fauxtina”. But I also don’t care for two registers on my Speedy or a date, for that matter. 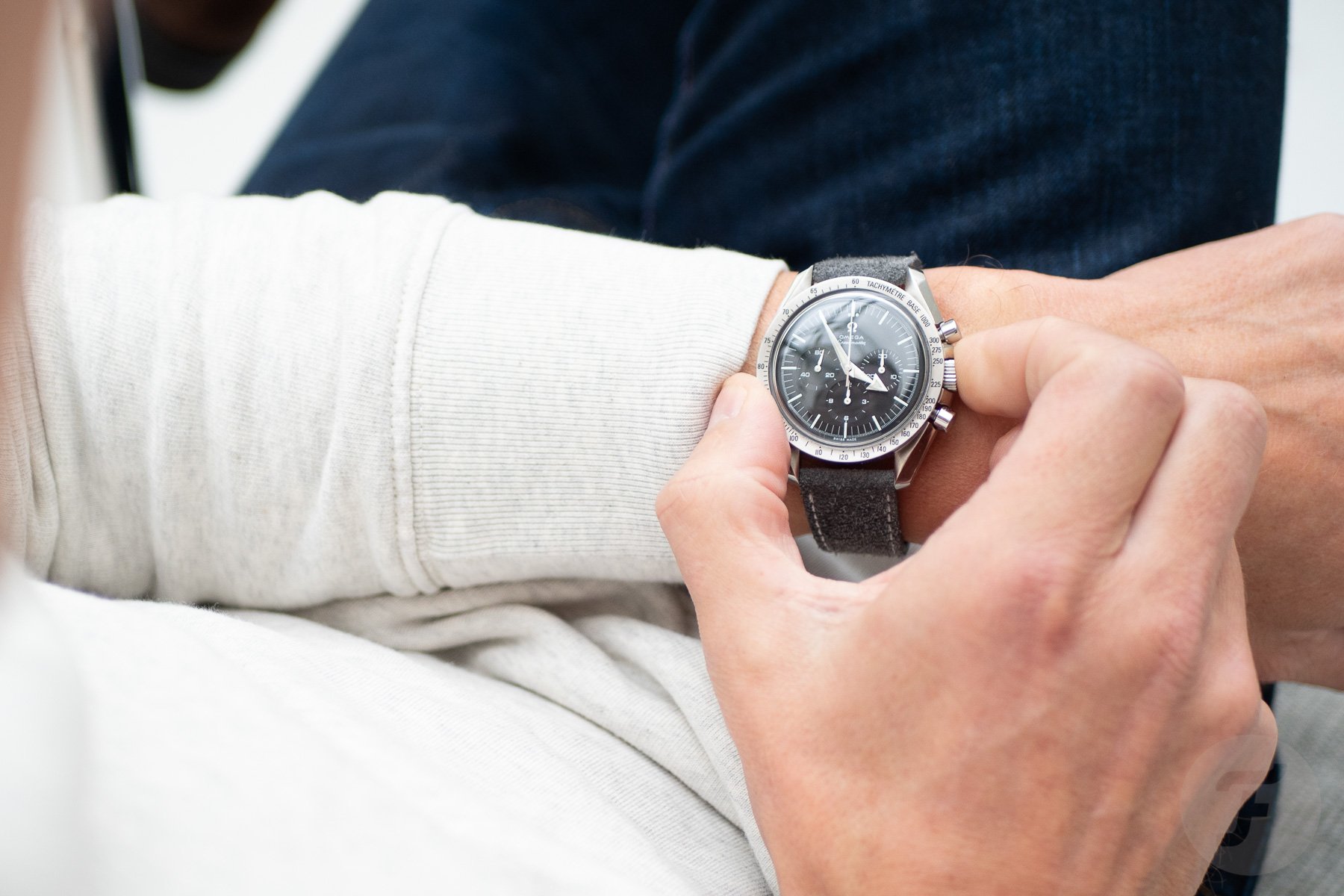 The movement of the current Speedmaster ’57, the manual-wind caliber 9906, is stunning, though, and the size is perfect. Still, when it comes to Speedmasters I would like to wear/own, I want them to be a 42mm version with an asymmetric case, just like the 3594.50 Replica. 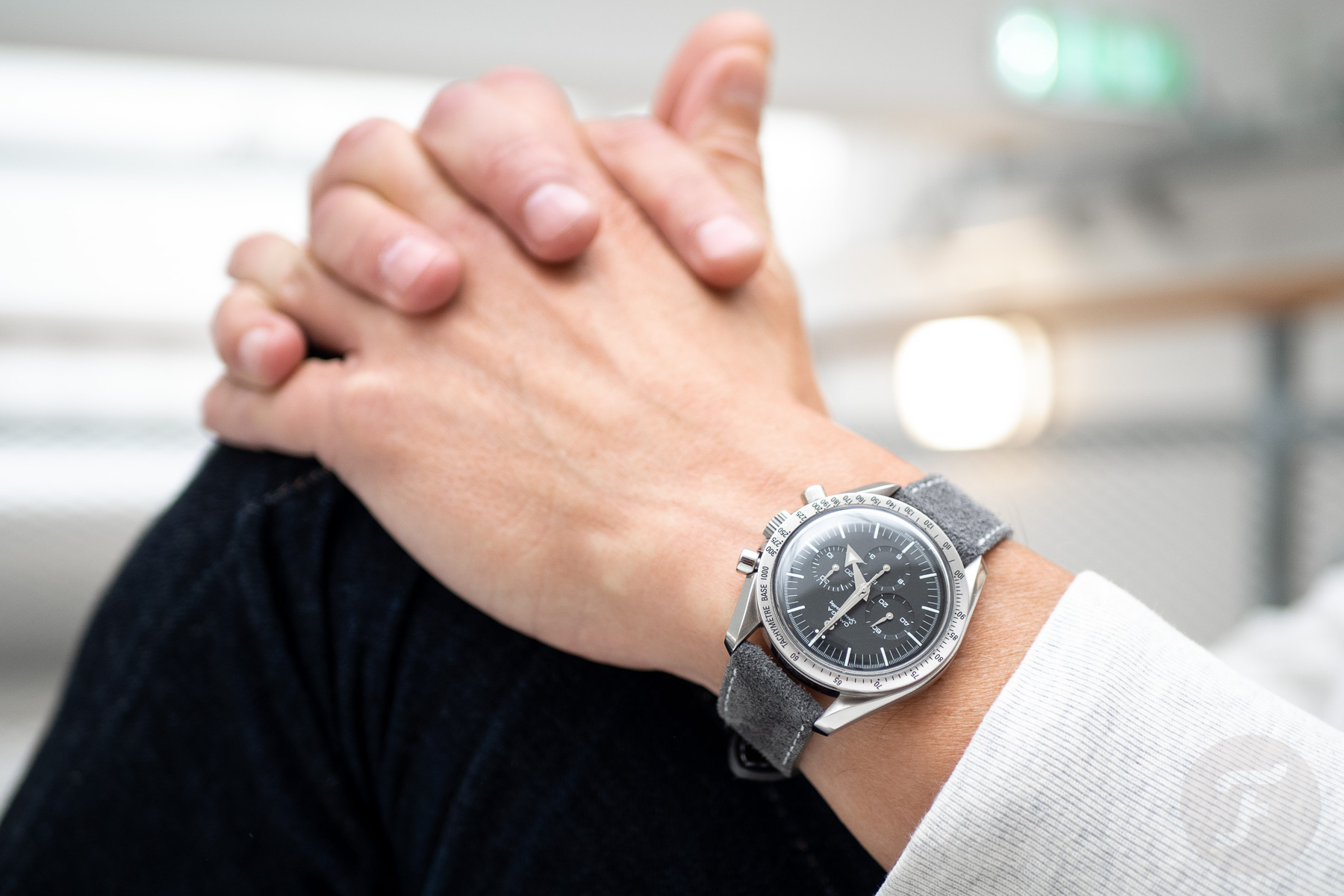 All sizes, dial layouts, and movement options aside, the Speedmaster 3594.50 Replica is the one for me because it just feels right — come on, just look at it in its utterly svelte gray attire! Yes, the “Tintin” 311.30.42.30.01.004 that I wore the other day is also a hypnotically good watch, but it doesn’t feel perfect on my wrist like the Replica. And I don’t know if it’s wise to share this with you, but I will do so anyway: dear Fratelli, the Replica is an under-the-radar Speedy. According to RJ, by the end of 2003, the Speedmaster 3594.50 Replica was taken out of production. This model was never a bestseller. And that’s a good thing price-wise. I will say no more. Other than that, wearing RJ’s Father’s Day Speedy was like wearing “Strawberry Fields Forever” on my wrist. Just watch this space.