What, You Haven’t Heard Of The Massena LAB Geometer?

Well, I have some bad news: it's already sold out
Tomas Rosputinsky
comments 19
Share

It’s not even March and I have no doubts that we are looking at one of the most unexpected reissues of 2022. The mid-’50s “pre-Speedy” chronograph, the Rodania Geometer, rises from the grave of horology once again. This time, it’s under the surprising Massena LAB label.

The entire watch community enjoys contemplating what is going to hit the market in a given year. Especially when it comes to Rolex anniversaries, everybody gets very excited and shares their wild guesses. But I bet nobody saw the Geometer coming back this year. Sorry, this century. And nobody saw it coming back to life by William Massena’s hands. But ooh boy, what a witty release it was! 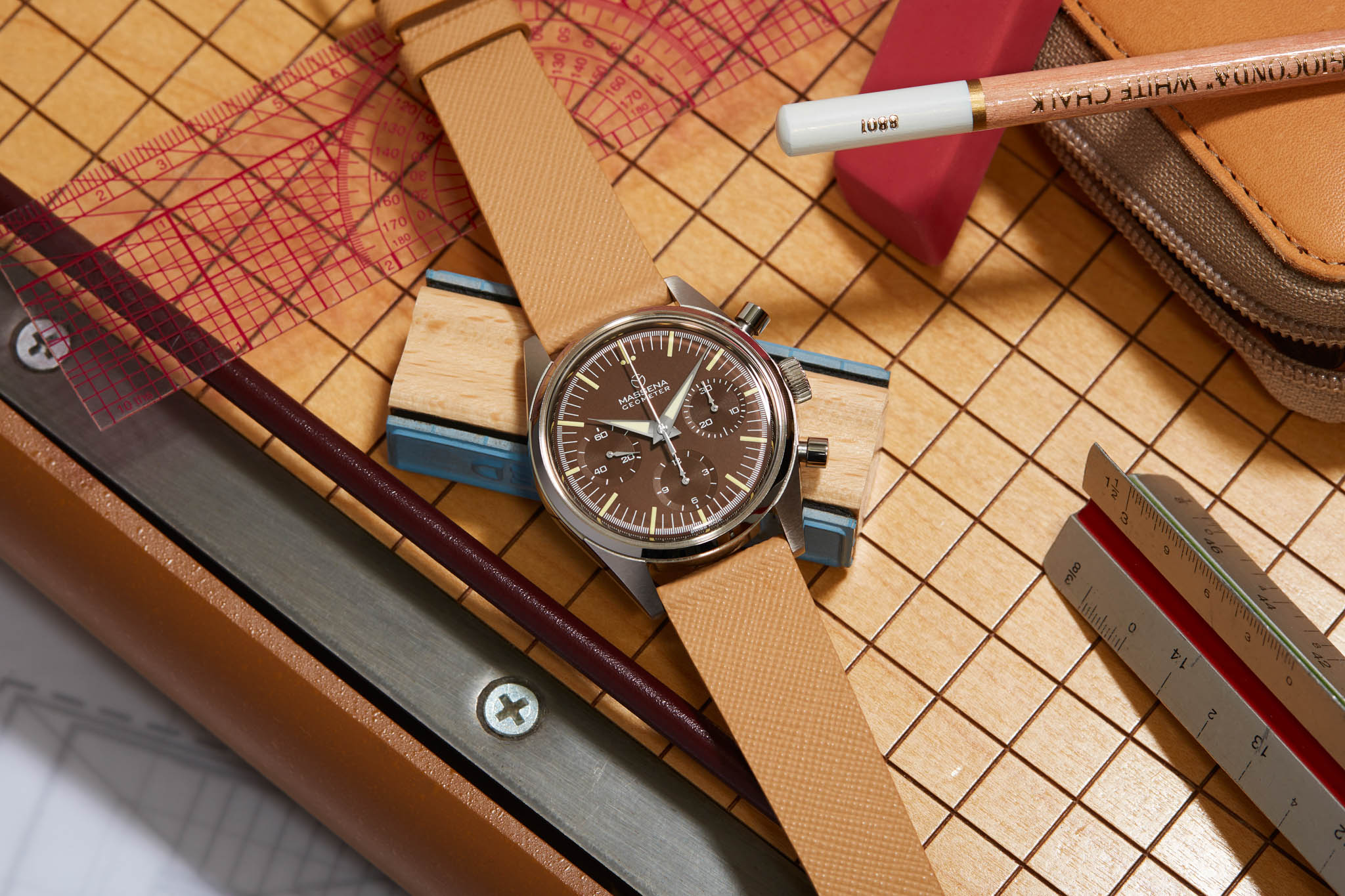 Not Rodania, but the Massena Lab Geometer

It was the evening of Tuesday, February 8th, when I happened to check my email inbox. I almost spat out my tea when I laid my eyes on an email subject line that read A Very Private Launch: Introducing the Massena LAB Geometer. “Is this for real?” I said half out loud to myself, and I couldn’t wait to learn more.

Let’s take it back a step

The original Rodania Geometer is a fascinating watch that scores big, fat auction results without being too well known throughout the watch community. It’s a great example of niche collecting. Hardcore Speedy fans should know it due to its mysterious resemblance to the Speedmaster. The twist is that the Rodania Geometer hit the market a good three years before the first Speedmaster did. Prices for the original Geometer have sky-rocketed recently and matched the level of a solid Ed White Speedy with a 321 caliber. I watch Geometer auctions closely, and the last one auctioned with Christie’s last December scored above the $20K mark.

William Massena is a well-known figure in the watch industry and enthusiast community. He and his watch studio, Massena LAB, have already scored multiple successful releases with the Habring², Ming, and the Italian brand Unimatic. The last release mentioned, the Massena LAB Modello Uno U1-ML6 with a burning galvanic dial and a bezel inspired by the Rolex Submariner 6538, has sat in my collection since its release in 2020. And most importantly, it earned me a seat in the Massena LAB friends-and-family club. 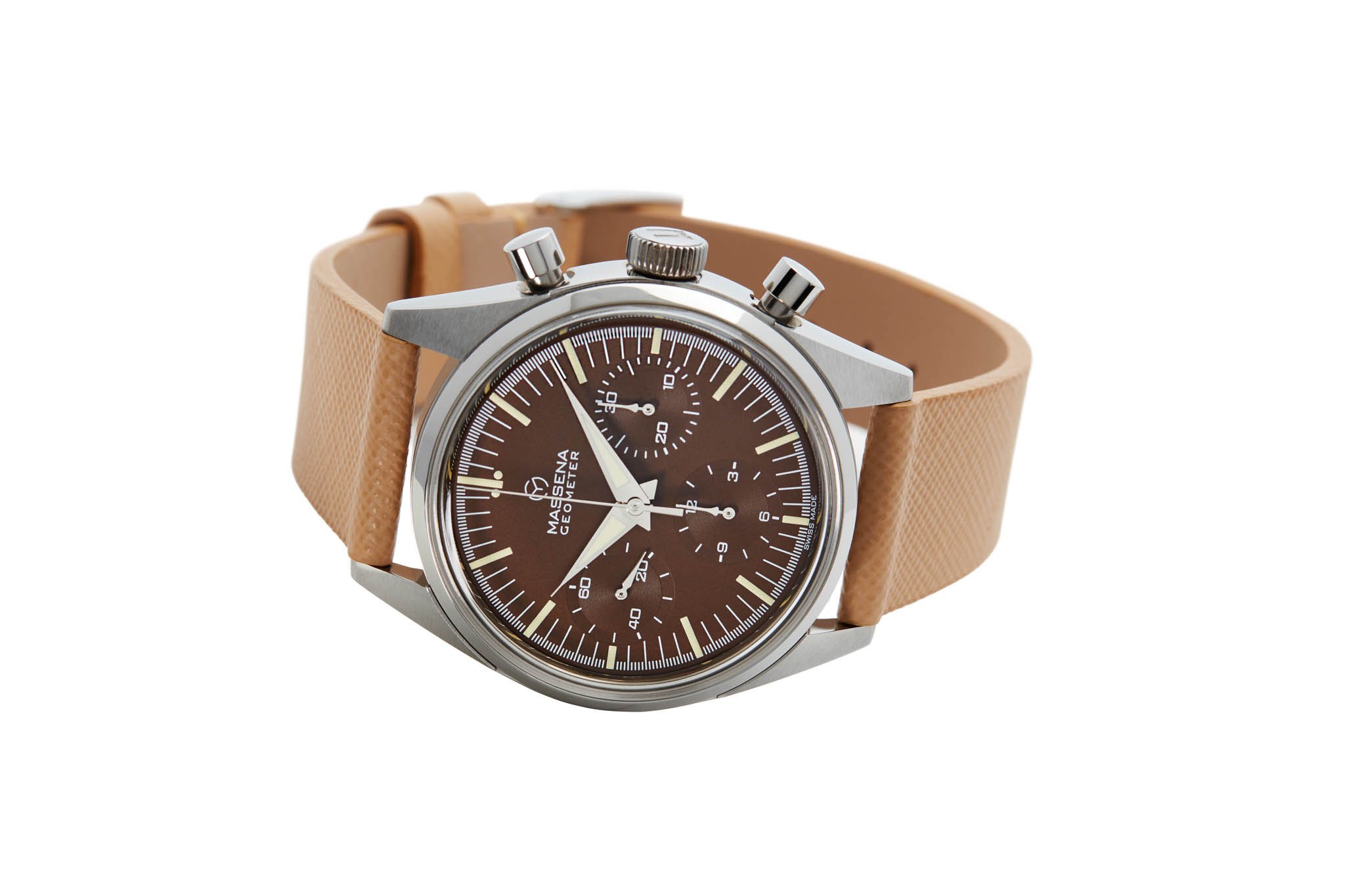 I never thought I would be so happy to be on someone’s mailing list. And here we are. The Massena LAB Geometer was offered in a quiet release for friends and family, and it was never intended to be released publicly. Friends and family had the chance to think about it until the end of March when the sale was going to officially end. “The number ordered within this timeframe will determine the number produced. However, total orders will be capped at 99 pieces. If the number ordered is less than 99, then that is the number we will produce.“ I liked the promise, and without much thinking or hesitation, I ordered one. 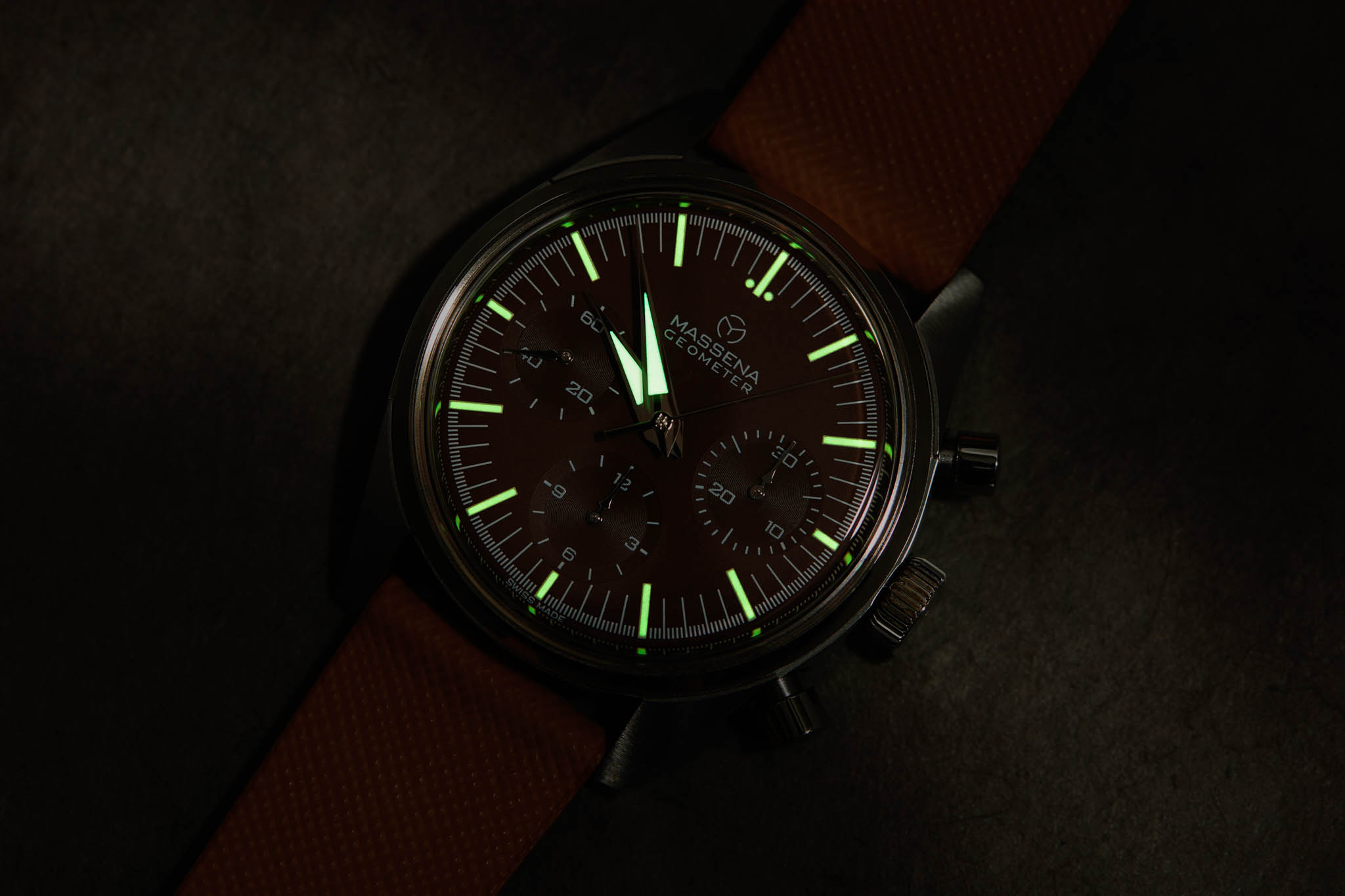 I came back online after a week, and to my great surprise, all 99 pieces were gone. With a $3,495 price tag, I call that quite the successful take-off. Did William Massena expect that the Geometer could sell out within four days? “Not really, and that is why this offer was available until March 30th. I thought there would be some interest, but not that fast,” admits William honestly. 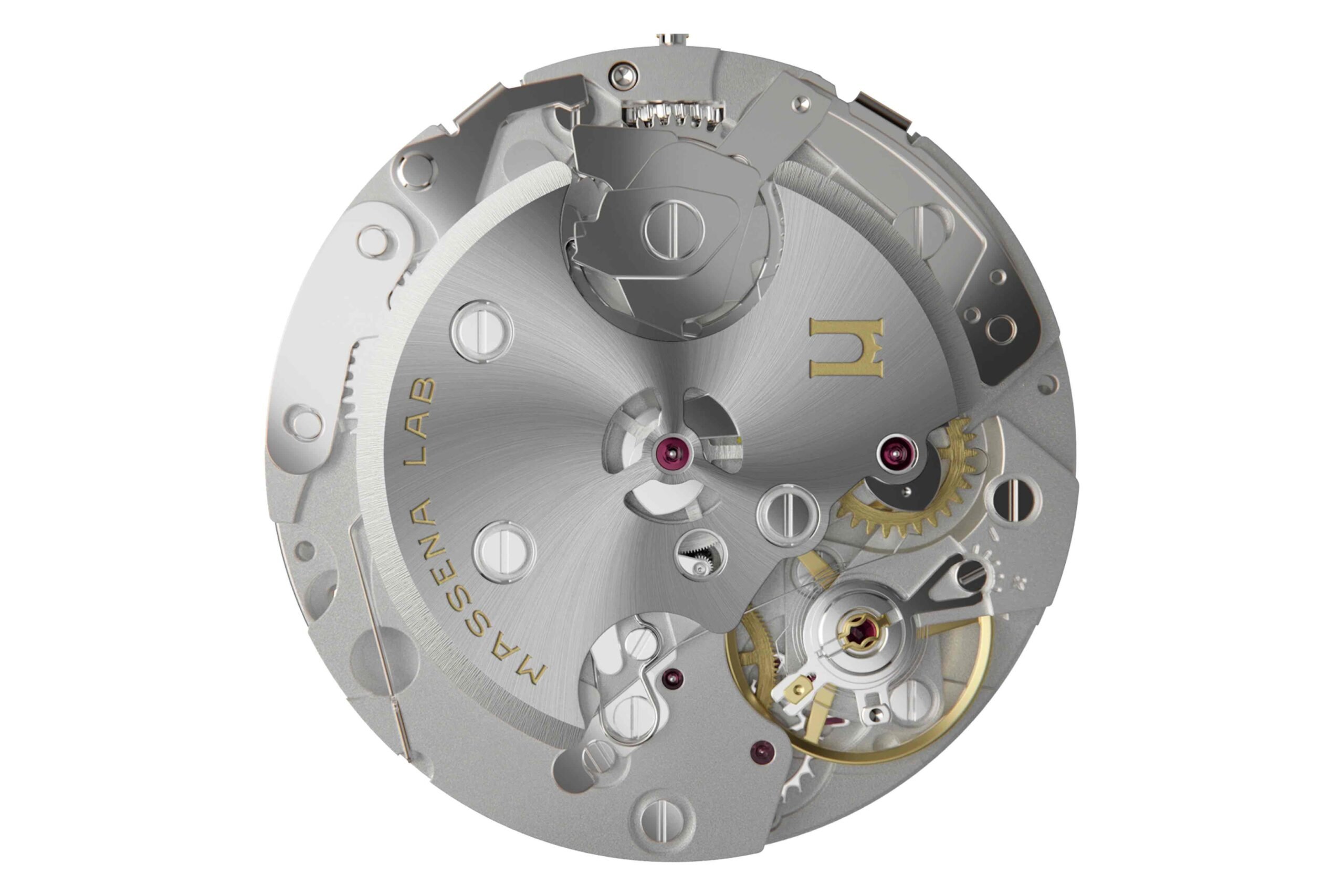 If you look more closely, you will notice that the 39mm polished stainless steel case with brushed lugs is different than its vintage counterpart. The original Geometer had lugs that were slightly more curvy. Obviously, the mighty Valjoux 72 that comes with the original Geometer has been “replaced” by a Sellita SW510 Elaboré with manual winding. A solid case back won’t allow you to see the Massena-signed movement, but it’s nice that William insisted on having it signed anyway. Just the knowledge that it’s there is sometimes enough.

While we’re on the topic of the case back, the watch description said it would be individually numbered, but the imagery showed nothing of that sort. “The watch will have a serial number, but not a LE number. I dislike limited edition numbers tremendously. Everyone wants the same numbers and people feel entitled to that number. Massena LAB uses the same principle as Patek Philippe — our watches will have a case number, based on a continuous system, and that is it.” That makes sense. It’s another example of how one can use a problem and turn it into a differentiator. 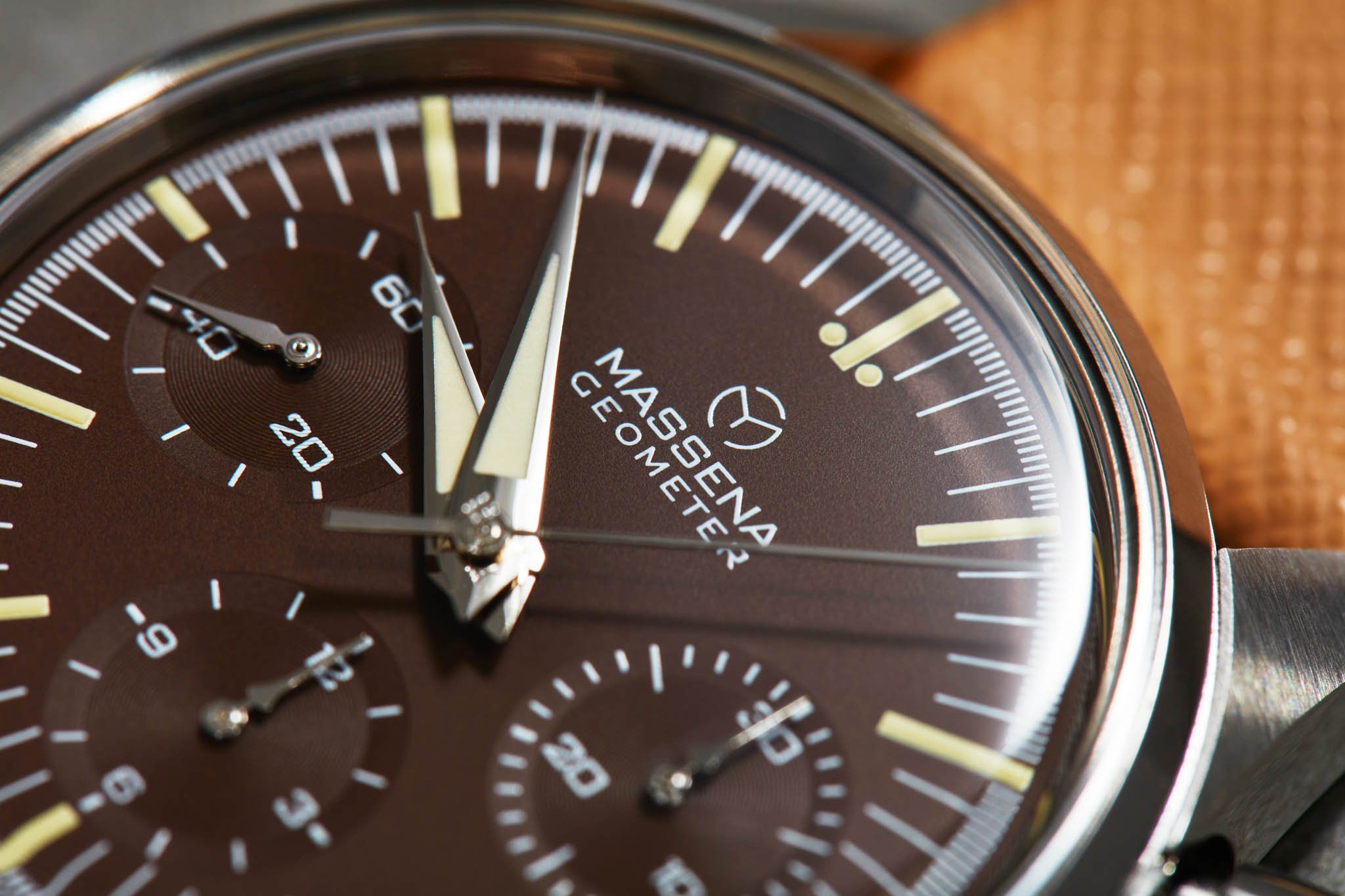 The dial is as beautiful as the original Geometer. Maybe it’s even nicer because it has that shiny touch that only a new watch has. But the font on the dial is slightly different than the OG. The “M” Massena logo that carefully plays with an old Rodania symbol is unique and quite amusing. The rest of the dial is almost identical to its role model. 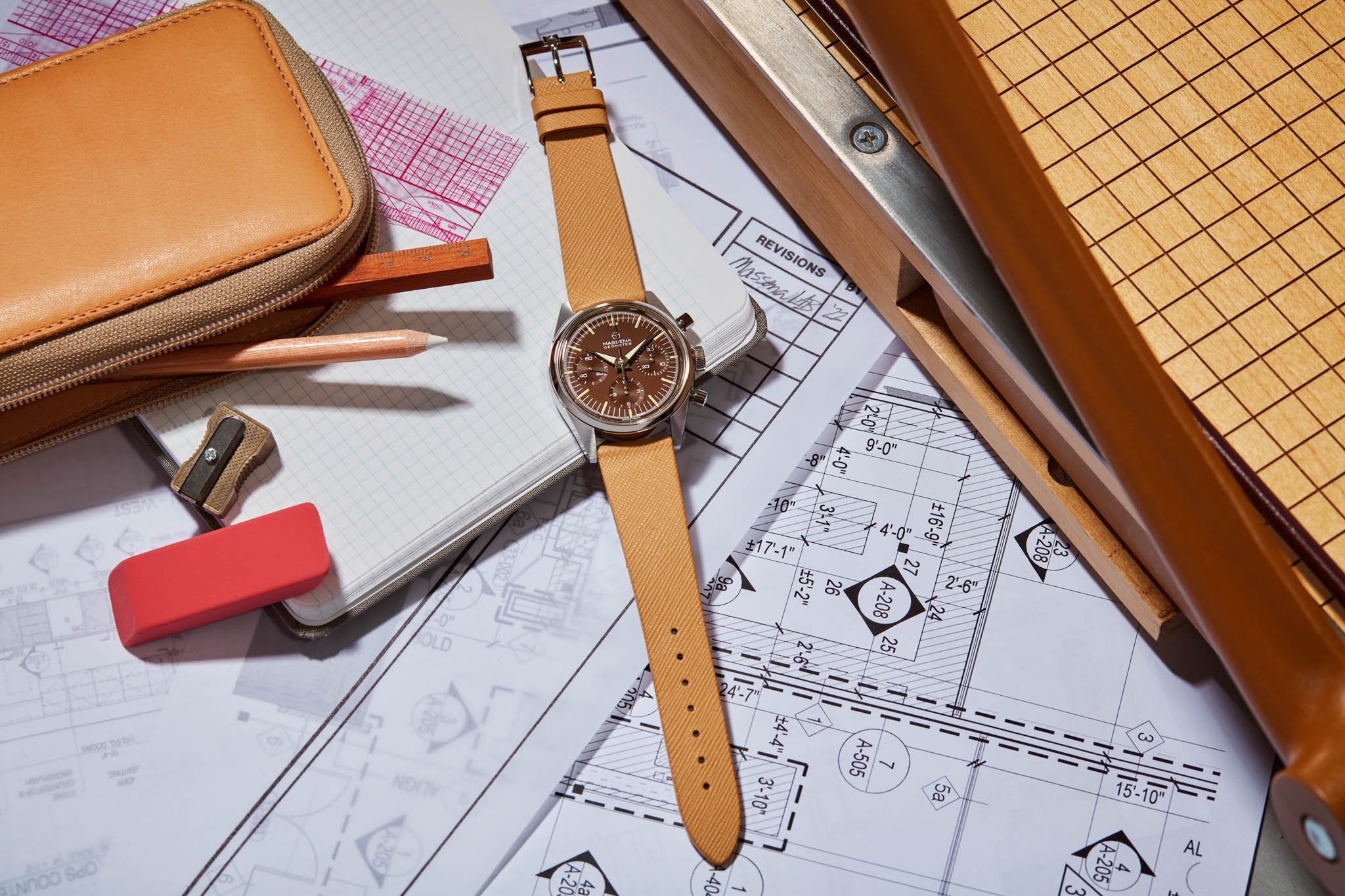 The dial also got a tropical touch that looks very nice in the pictures. What is really unique (and, for me, even slightly more attractive than the Speedy) are the distinctively wide and sharp hour and minute hands. William Massena owns an original Rodania Geometer, and the hands are his favorite detail. “I love the hands, they are truly unique and so elegant. Some can argue that the minute and hour indicator are not very distinguishable, but I think you can easily get used to it.”

One mandatory question, as we all know Rodania still exists. Isn’t the brand mad about the latest Massena Lab release? “Rodania is very aware of this project, and the fact that they did not want to participate is understandable. They are not selling watches at this price point and this level of watchmaking with a Swiss-made label,” William Massena explains. 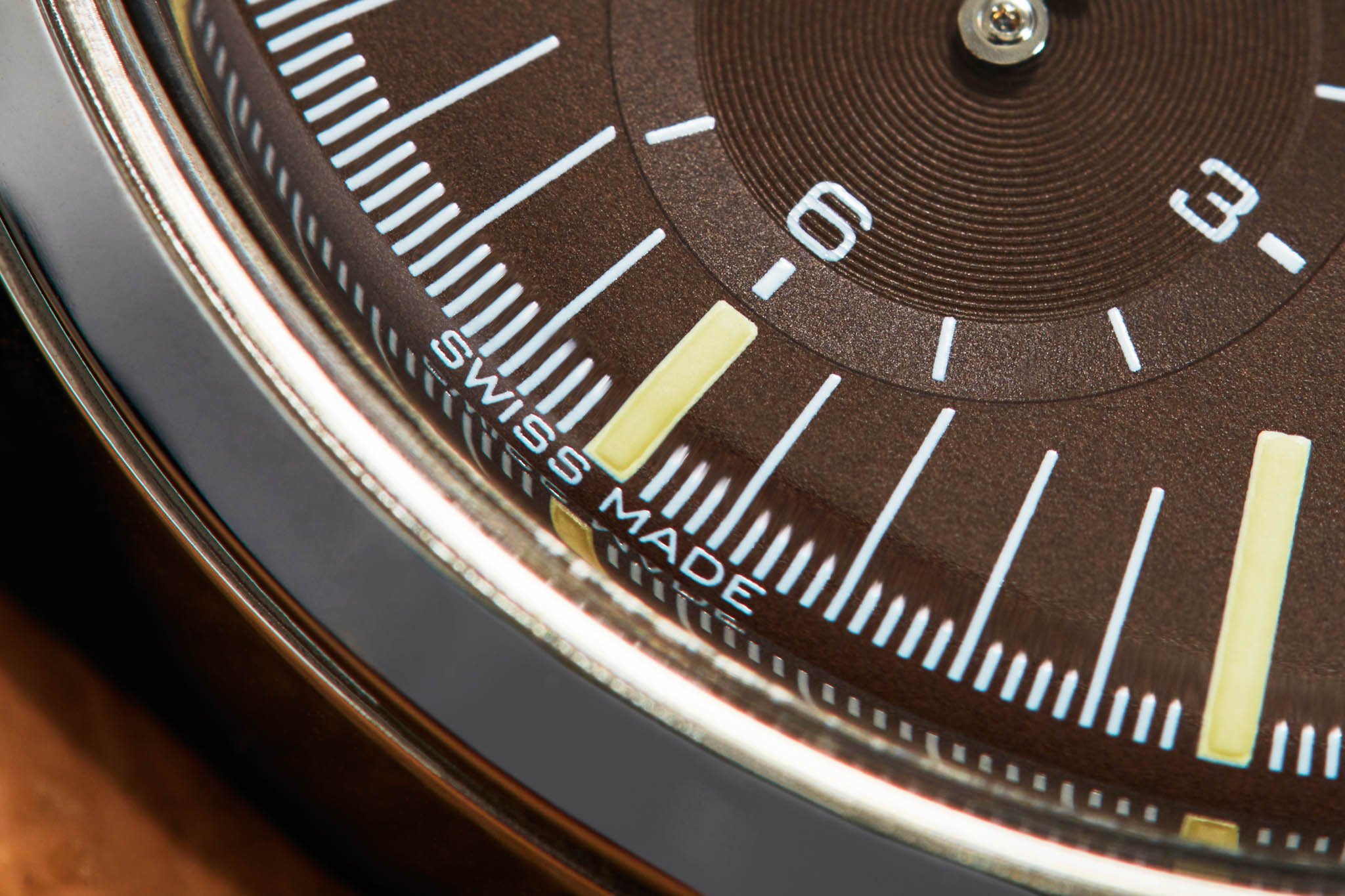 Usually, someone buys a “sleeping” brand and brings some of its legendary models back. Take Airain, Nivada, or Aquastar, for example. What Massena did is quite a bold and unexpected move. Even as a vintage-watch nerd, I can say I did not see this coming. I could imagine many revivals, but this one deserves a round of applause just for taking place. Stay tuned for September when I will gladly bring you a hands-on review, too. I hope the Massena LAB Geometer exceeds all my expectations.