I shamelessly confess that I wear this shiny, gold-tone Seiko Mickey Mouse more often than initially thought I would.

Being watch lovers, it is not surprising that we often find ourselves compelled to gift our newborns with their very first tickers. While the temptation to buy a 3-week olf baby a classic chronograph that will make it the envy of all the other babies in kindergarten, it makes more sense to buy a watch that will spend the first 18 years of your progeny’s life on ice. It’s generally considered that the Rolex Datejust or Omega Constellation are great choices for this kind of thing. But if neither of those well-trodden paths tickles your fancy, take a stroll through this list and see if you like the alternatives.

Welcome back to our fourth episode of traveling back to the 1980s or 1990s in search of “neo” vintage timepieces, or young timers if you prefer. After the stone-cold Tissot RockWatch or crazy radio-controlled spaceship branded Citizen 7400 we present again (drum roll please) another quartz watch. If you thought quartz is too boring to look into, well our TimeTravel section seems to offer pretty strong arguments against the fact. Pay attention to the striking Seiko Mickey Mouse for two seconds and you have to agree that regardless of whether you like the watch or not, a comment is making its way out of you. 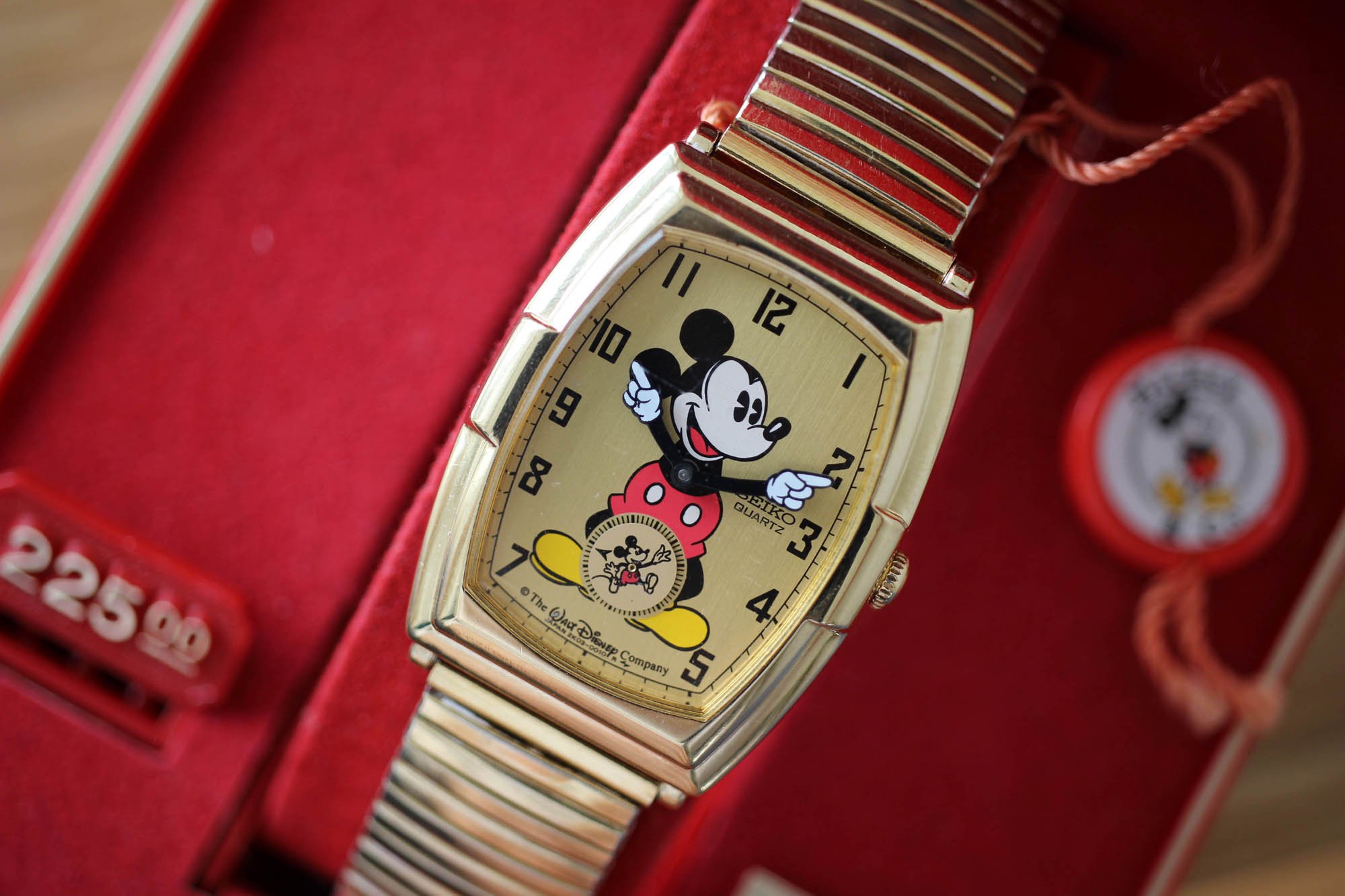 First of all, I don’t consider myself a golden boy. A gold-plated watch makes me gold-hesitant. So far there was one and only watch that had a gold-plated case and dial that I took an instant liking to. It was my first vintage watch, the Vulcain Cricket. Yet I like the sentiment attached to it much more than the watch itself, as it was the first vintage watch I bought as an adult. Like many people, I felt a bit strange with a fully gold-plated watch. With Mickey Mouse conquering half the dial, that feeling evaporates.

One of a kind wrist feeling

I’m not saying you will necessarily praise it. But for me, it is a surprise find. There isn’t a watch I could compare it to. It’s funny and serious at the same time. I see a business partner not being sure what to think of me when I come to the meeting with this Seiko Mickey Mouse on my wrist. Did I buy it at the Chinese flea market or is it a serious piece? 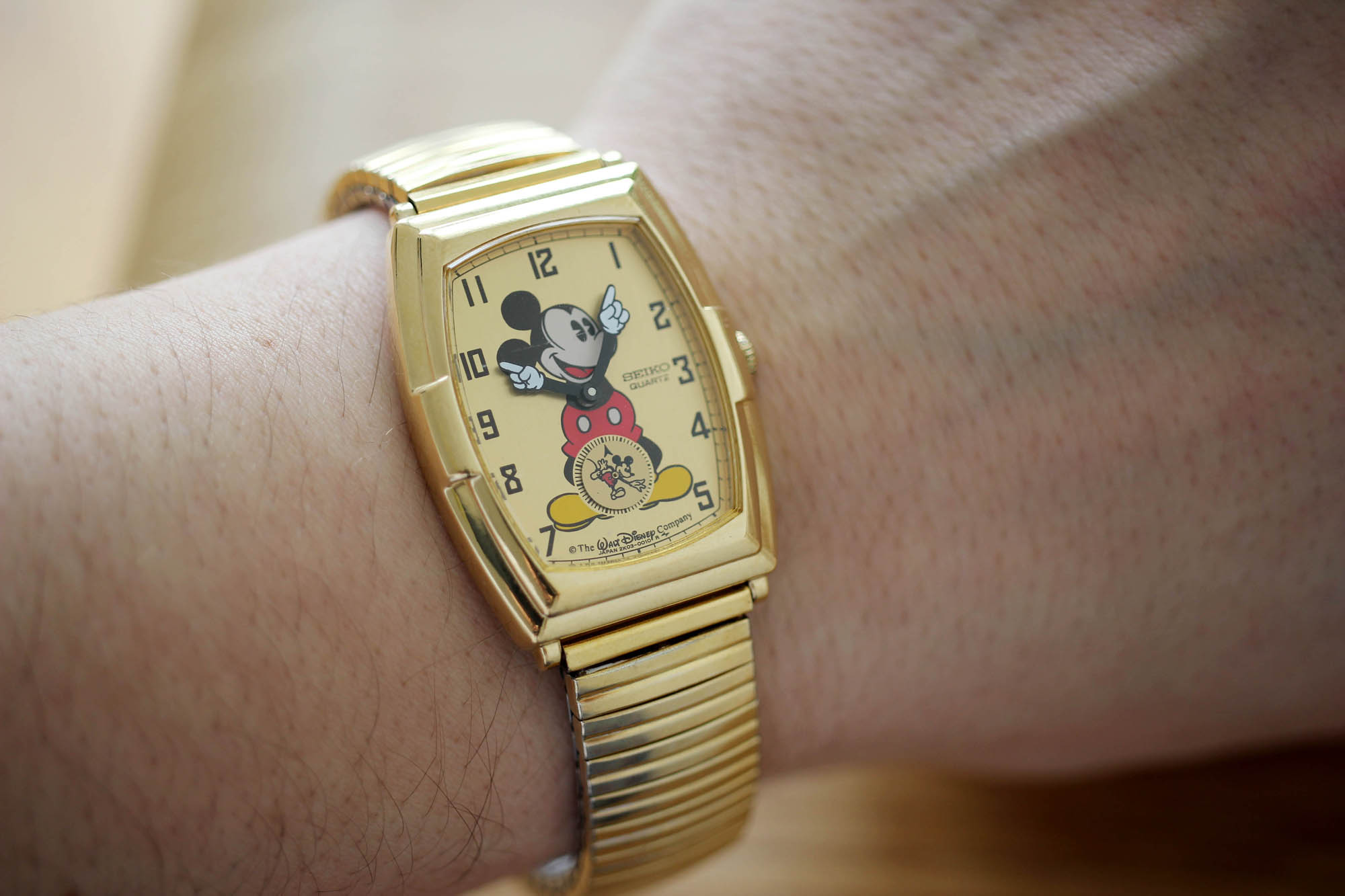 The rich case reminds me of 1940s high-class Hamilton, Gruen, or Bulova. So does the old-school font on the numerals, that only reinforces the already serious enough style. The gold case looks like I just soaked it in a gold bath three minutes ago. The Seiko Mickey Mouse looks like liquid wealth, so heavy that I would not be able to raise my hand under its weight. And that color. I tell you, is as good as RJ’s Omega Speedmaster Apollo XI 50th Anniversary that he adores so much. Anytime I look at my wrist I feel like the Gods are playing in Photoshop and constantly add saturation to my gold case.

If I’d covered the Seiko branding at three o’clock, would you have guessed it’s a Seiko watch?

All that glory, and I seriously mean every single letter I wrote above, is in striking contrast with the Mickey Mouse figure. Does it look funny? It does not. And do you know why? Because Mickey is not an add-on. Usually, you have a watch and a character. If you put the two together, you get a watch with a character on it, with the watch still being an expensive and individualistic Rolex or a bargain Timex. My point is that usually, there the character is just glued on to the watch, often in a very obtrusive way, and that’s it. It’s a marketing trick. Here we see a different story. If I’d covered the Seiko branding at three o’clock, would you have guessed it’s a Seiko watch? 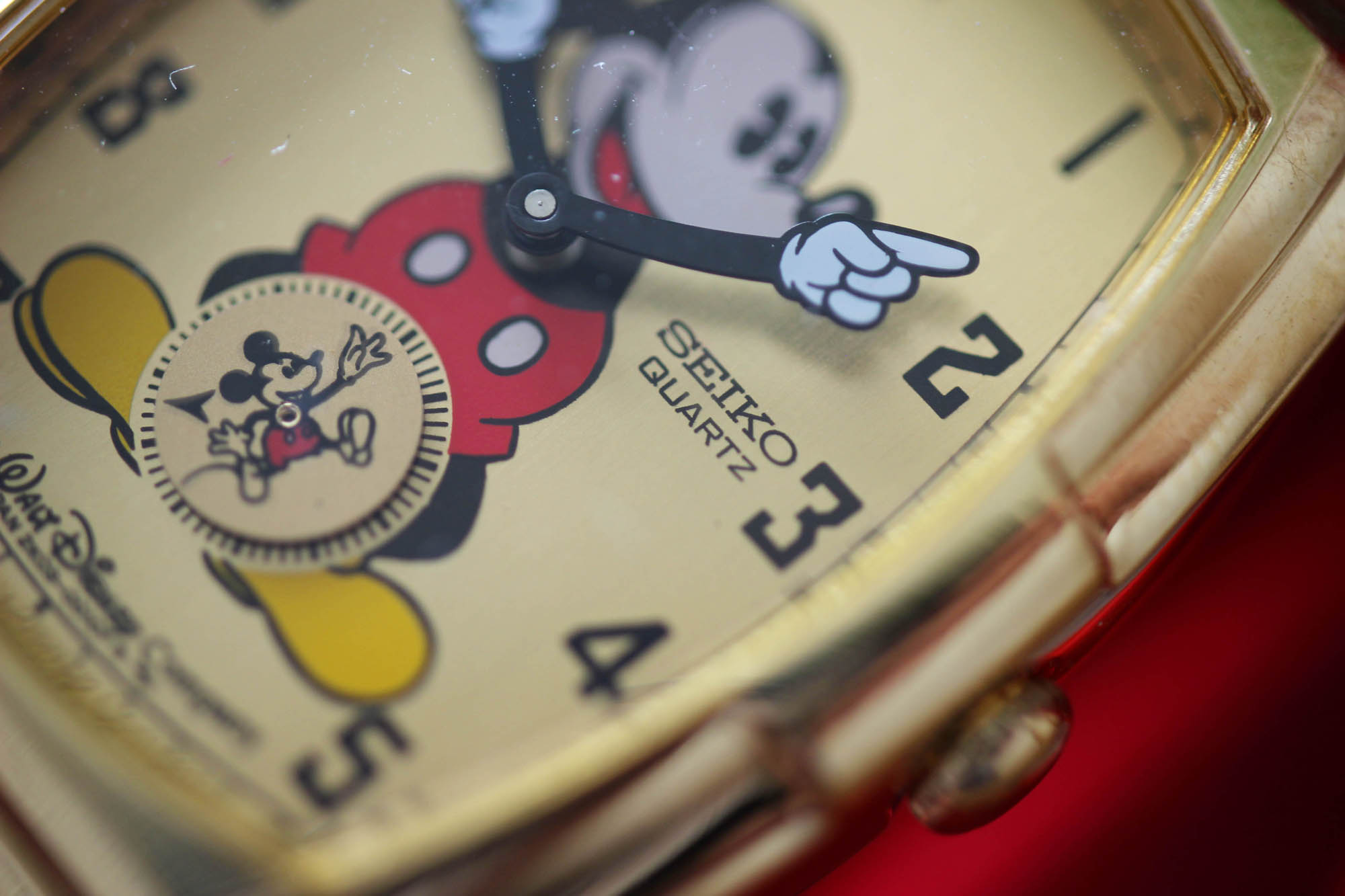 The wisecracks here would argue that if you are not able to read the DNA of a watch from its basic design traits on the dial or case, it wasn’t a job well done. Some might say that it’s just a generic, sh*tty quartz watch with an animal on it. After living with the watch for a while now, I wouldn’t be surprised by the arguments, but I wouldn’t let them ruin my unexpectedly happy feeling when wearing this cheap Seiko Mickey Mouse. 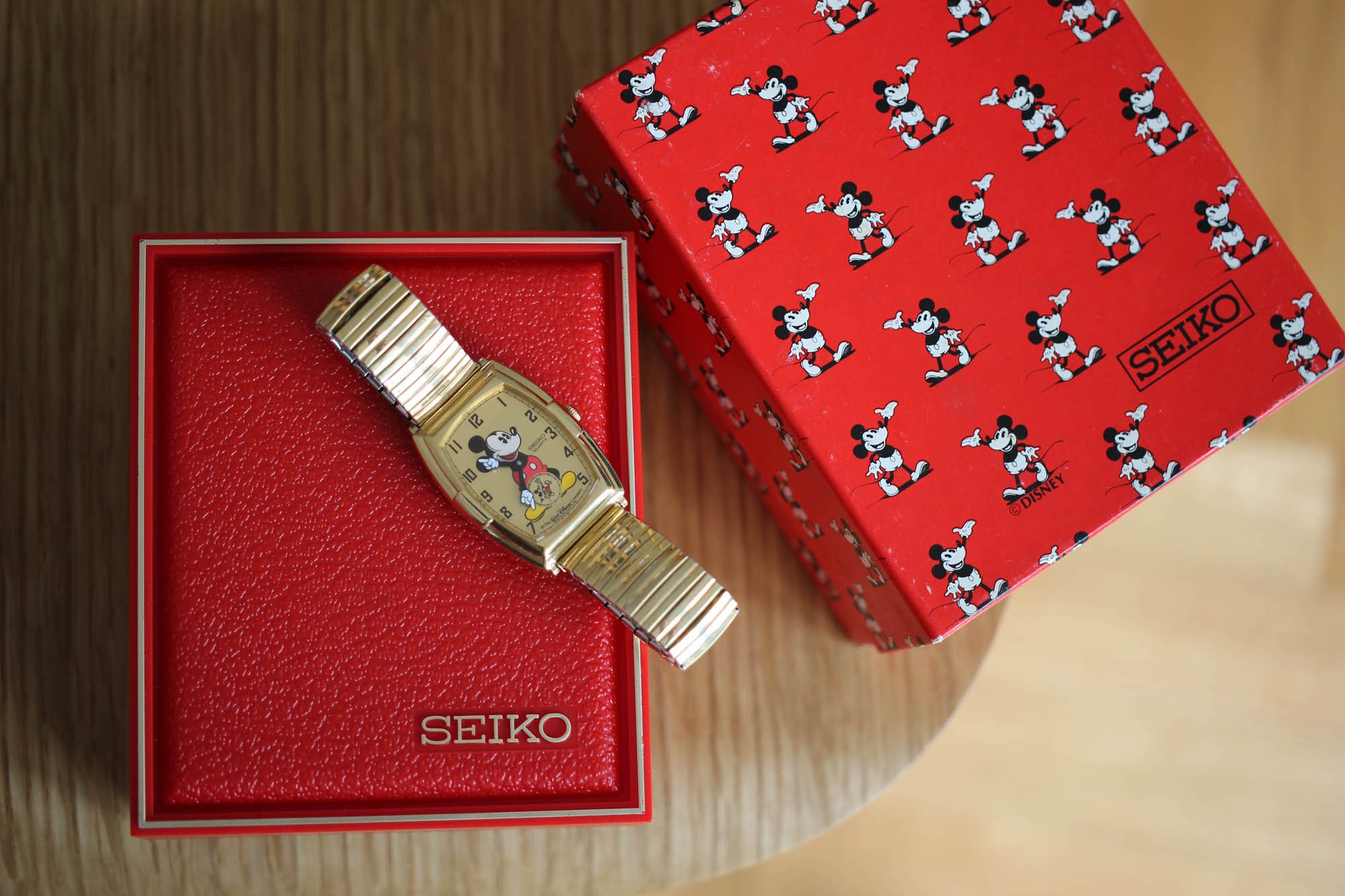 When I say cheap, I’m talking anything from €80 to €300, based on how strictly you insist on having an original gold-tone expansion band, original packaging, and papers and where the watch is shipping from. I got mine from Ed in the US. “I purchased this highly collectible Mickey watch new from Carlyle & Co. jewelry store in Fayetteville, NC on November, 11th, 1988. I’ve worn this watch several times after purchase before deciding to place it into storage with my other watches.” When the watch arrived, I found the expansion bracelet too loose, so I immediately changed it for a thin black leather strap and it wears super comfortably.

If you look at the juicy red watch box, there is a sticker inside. It explains the watch was released to commemorate the 60th anniversary of Mickey Mouse. To point out one meaningless detail, notice the eyes of one of the most prolific characters that have more than 200 film credits to his name. The box features full black eyes, but on the dial, you can see a so-called “Pie-Eyed Mickey”. 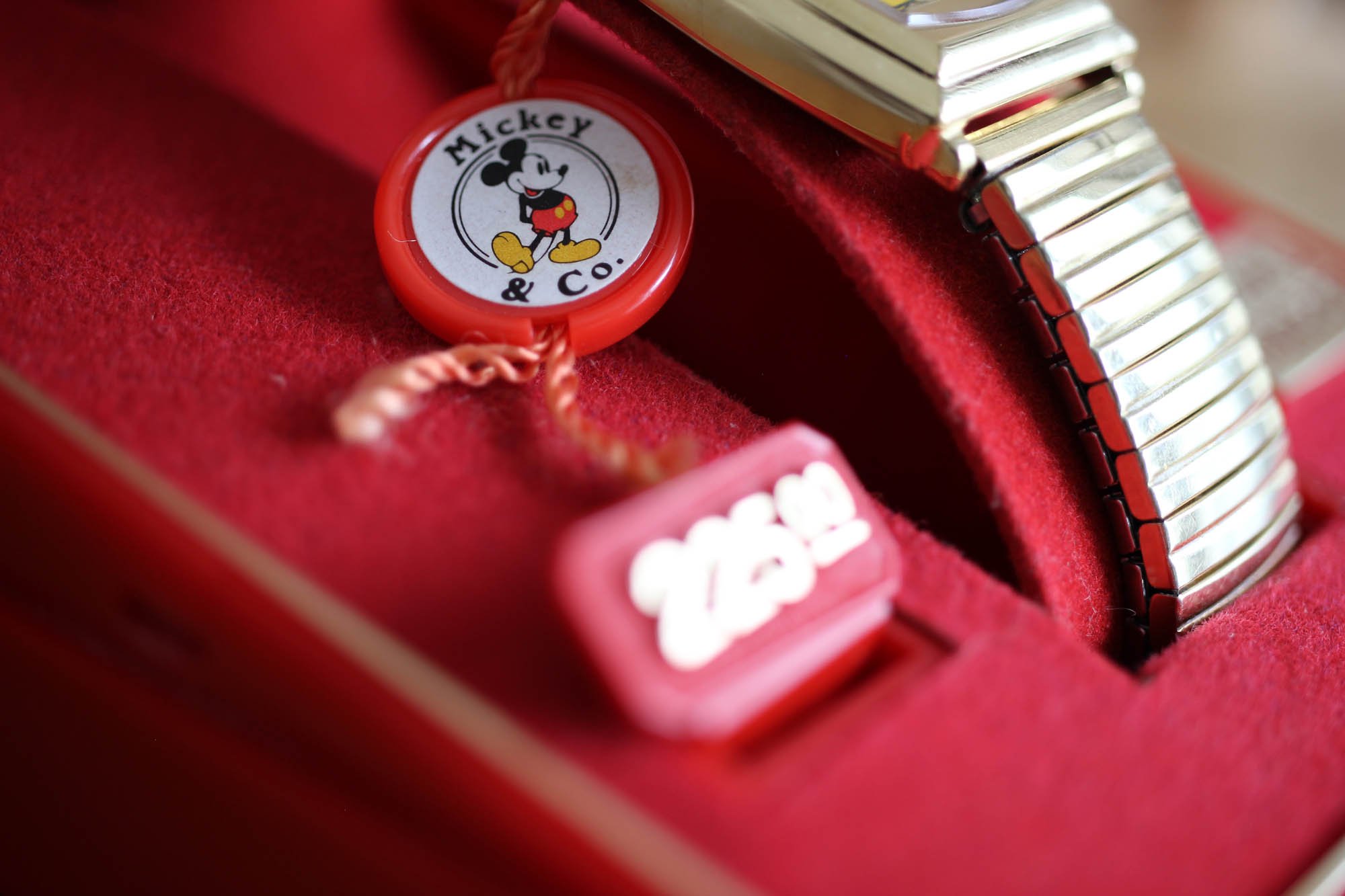 I like the worn effect to the crown and it seems to have been designed in that style. An original blue sticker on the case back and plastic tag are nice bonuses supporting the seller’s story of the watch sitting in a safe for years. Mickey’s hands are designed and executed nicely, so he doesn’t look stupid when the watch shows 12:30. The rotating sub-seconds disc is iconic. It feels like watching Inception movie, Mickey living inside Mickey. The watch is thin and light. In comparison to today’s standards, it’s still a bit smaller, but the 38mm lug to lug looks just about right. Not too Cartier-like small, not too big. 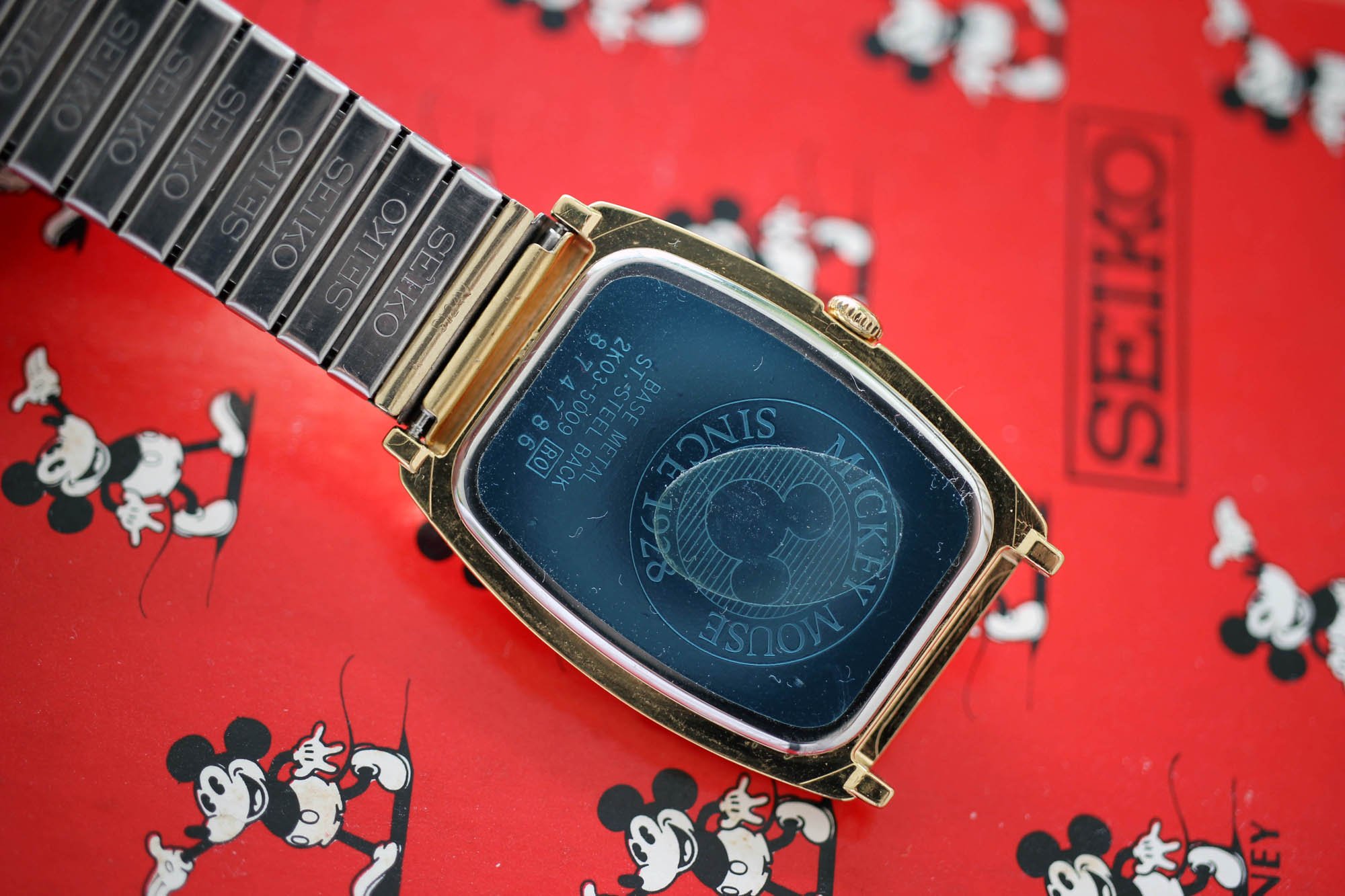 The funny part? I don’t feel like I escaped an insane asylum. I love the diversity of my watch collection. Although I could imagine narrowing my collection down to a few pieces, I don’t want to. The Seiko Mickey Mouse reminds me of not taking myself too seriously and paying attention to watch diversity. I didn’t have to force myself to like the watch. With its 60th anniversary stamp, it makes a perfect co-runner to my 60th Limited Edition Omega Speedmaster as well as a perfect twin to my MiniLip educational watch. I have to conclude now with a big, satisfied smile on my lips that my daughter’s watch collection is growing nicely. Happy hunting.

Hot Topics
Introducing: The New Seamaster Professional 300M 60 Years Of Bond — With A Special Animated Case Back
105 comments
Are You Still After An Omega × Swatch MoonSwatch?
85 comments
It’s Time To Invest In A Dress Watch — Our Picks From Breguet, Omega, Grand Seiko, And More
72 comments
The Rolex Waitlist Conundrum — How Much Will The Price Of Your Watch Increase While You Wait?
50 comments
The Best Omega Speedmaster Watches Of 2022
40 comments
Popular
(From The Archives) Shut Up & Read The Truth About Cartier Watches
George Cramer
21
You Asked Us: Tissot Powermatic 80 Seastar 1000 or Longines HydroConquest
Robert-Jan Broer
20
Speedy Tuesday – Olympic Games 2020 Speedmaster For the Japan Market
Robert-Jan Broer
3