The watch I am about to discuss today is not new to this website at all. Over the years various generations (3 to be precise) of X-33 have been discussed on the pages of FratelloWatches. We did reviews; covered watches worn by astronauts and even did write-ups on personal stories connected to this model. Some love this watch, some say it’s not true to the heritage of the Speedy Pro and I say it is a very interesting piece with a lot to offer. It’s the perfect tool watch, for me something very similar to the Tissot T-Touch. Since you can find many in-depth articles about the various functions and models of the Speedmaster Skywalker X-33 I will not go into details. You are free to browse the page for related content, where my fellow Fratelli explain each and every function of this time piece. The model we are about to take a closer look is different in its looks and there is a reason behind it. Please meet the Omega Speedmaster Skywalker X-33 Solar Impulse Limited Edition. 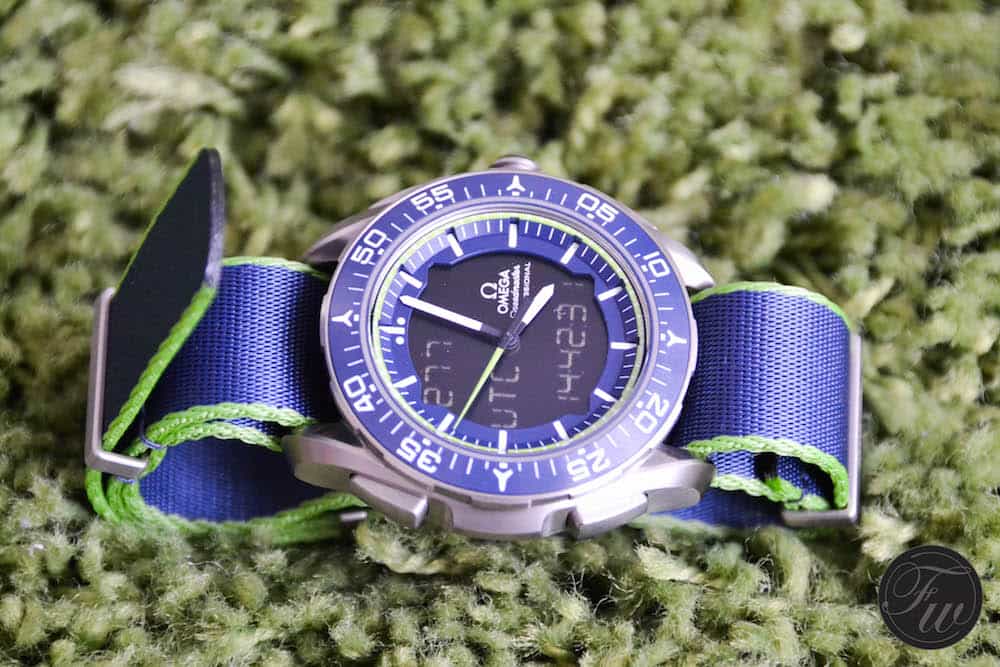 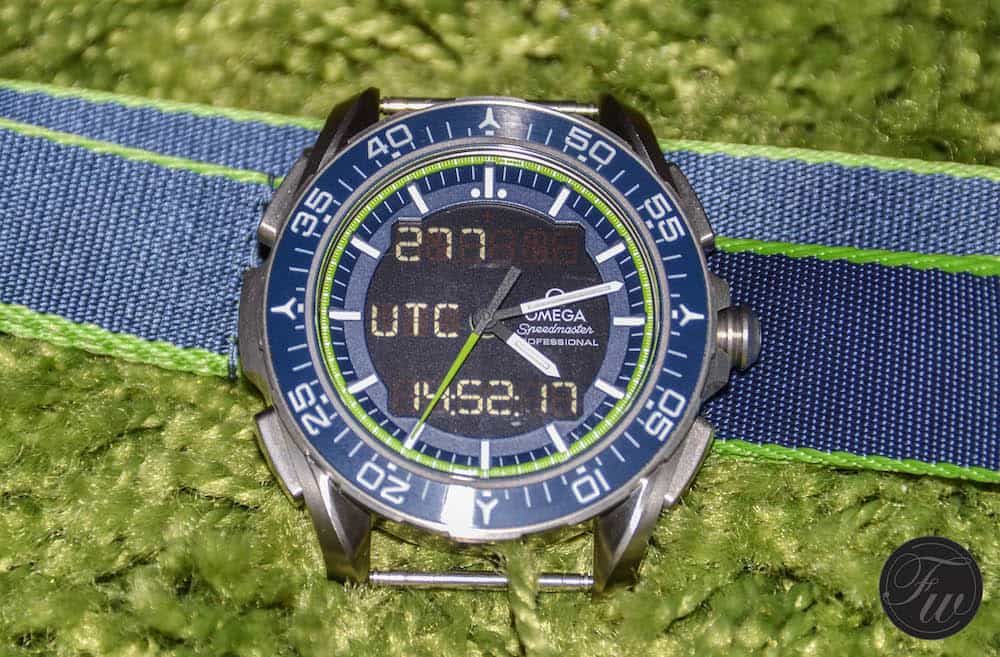 I first met the Omega Speedmaster Professional Skywalker x-33 Solar Impulse Limited Edition (I promise I’m not going to use the whole name every time) during this year’s Basel World and what instantly caught my attention was – yes I know it sounds odd – the strap. I remember years ago when I was active on watch forums NATOs were only starting to get recognized by users. It was not a common thing at all to offer a new watch with a NATO as a strap option. The tables are turned so much so that this year every brand that wanted to present something out of the ordinary or sporty put their watches on NATOs. Brands like TAG Heuer, Omega, Blancpain, Sinn or Bell and Ross the list goes on and on. I guess I can say that these straps are the rubber straps of the 2010’s. So it is no surprise that Omega equipped this limited edition with a blue and lime green NATO strap, without any other bracelet option. But what’s up with the odd colors? After all, the new Spectre Seamaster also comes on this type of strap but with far subtler colors. The answer is simple: Solar Impulse. 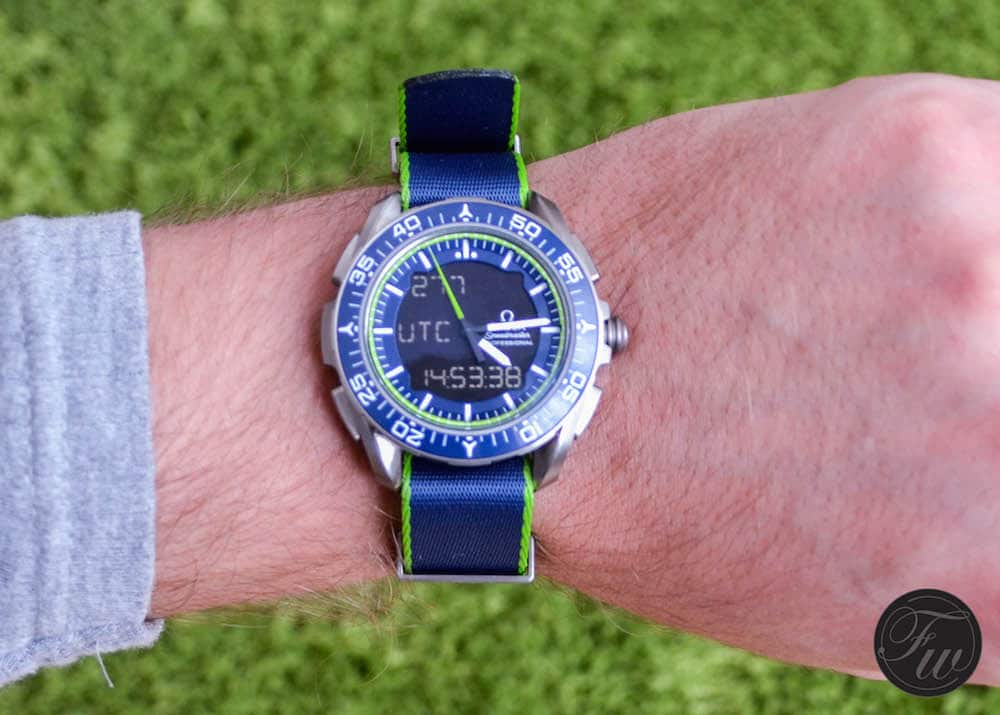 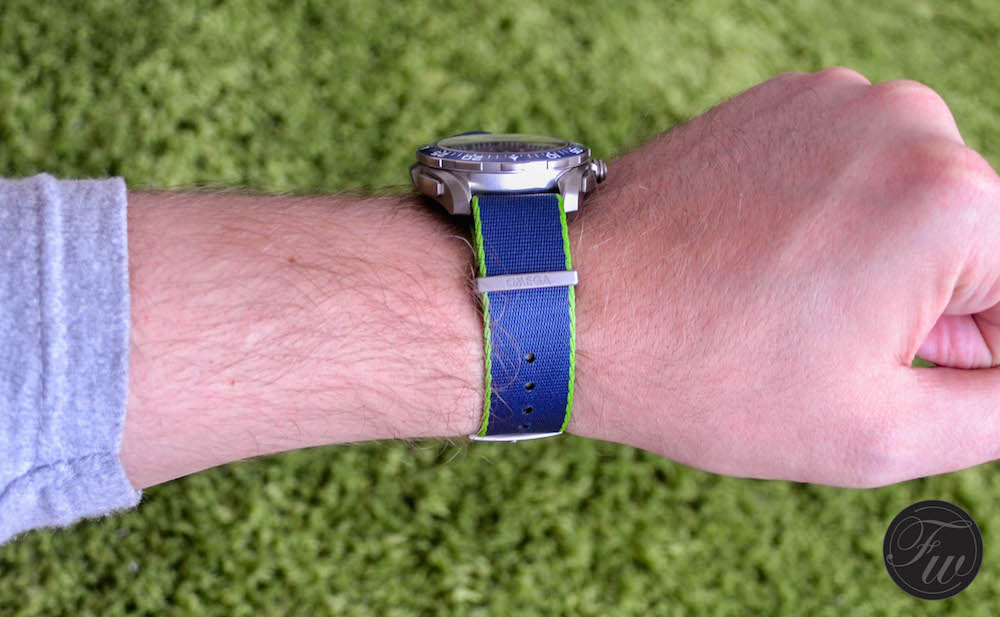 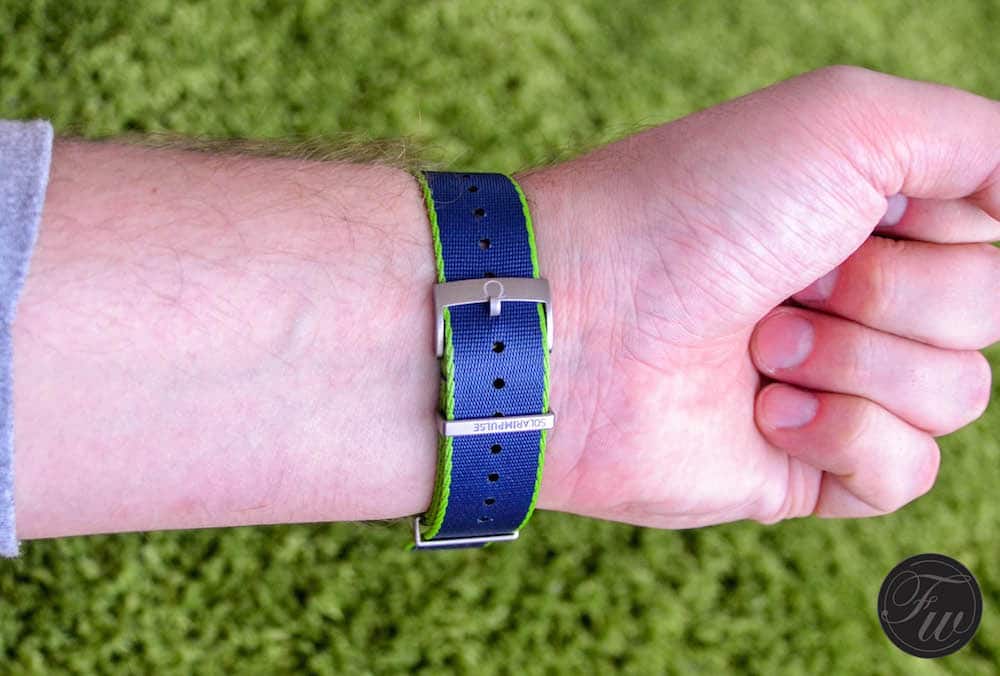 The project started 12 years ago when Solar impulse initiator, chairman and pilot Betrand Piccard, presented his idea of a solar-powered airplane to the École Polytechnique Fédérale de Lausanne (Swiss Federal Institute of Technology in Lausanne), a research university in Lausanne, Switzerland. The idea found its way to an official project launch, which took place on the 28th of November the same year. Omega joined the mission in 2006 as the main partner. This partnership, however, was more than a great PR stunt as Omega developed certain instruments for the project and equipped the team with their watches. These technological innovations helped the Solar Impulse Mission greatly. Machines like the “test bench” an equipment that simulated the electric system of the future-to-be plane on the ground, or warning systems like the Omega Buzz, a 20-minute countdown alarm that made sure the pilot never falls asleep during airborne. With these and many other contributions to the project, the first Solar Impulse test flight took place in 2010 over Switzerland. Then, in 2012, the first intercontinental flight and in 2013, the first flight across the USA marked milestones in this mission. In 2014, a new Solar Impulse 2 (or Si2) was introduced and with this plane the round-the-world Solar Impulse flight took off. The project is still ongoing with another flight started in March 2015. Hopefully, it will continue in April 2016 after an unexpected emergency stop due to technical difficulties forced the team to pause the mission and work on a few problems the plane experienced. 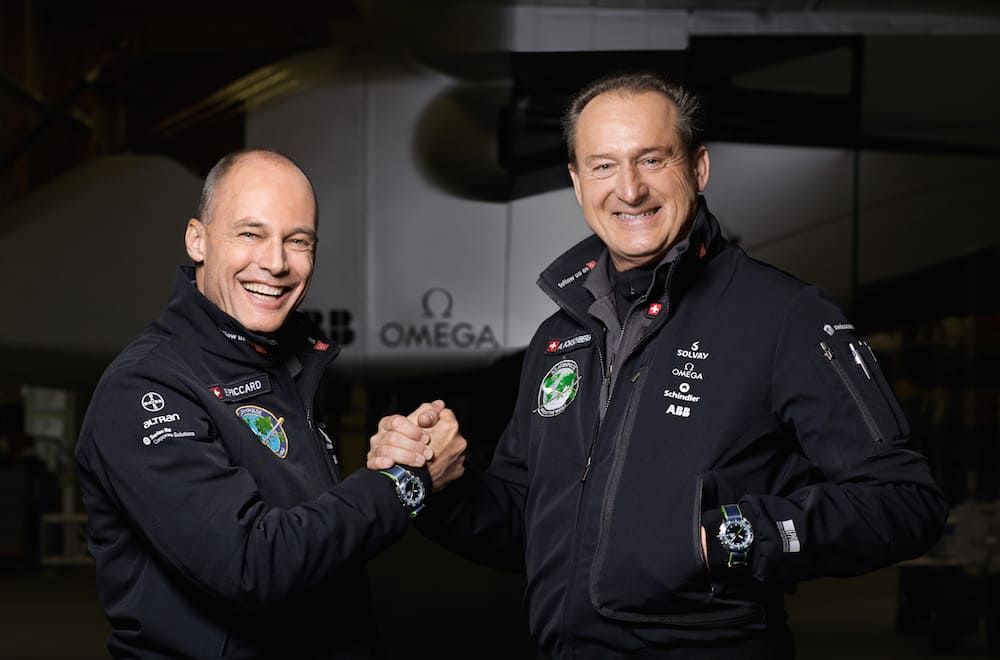 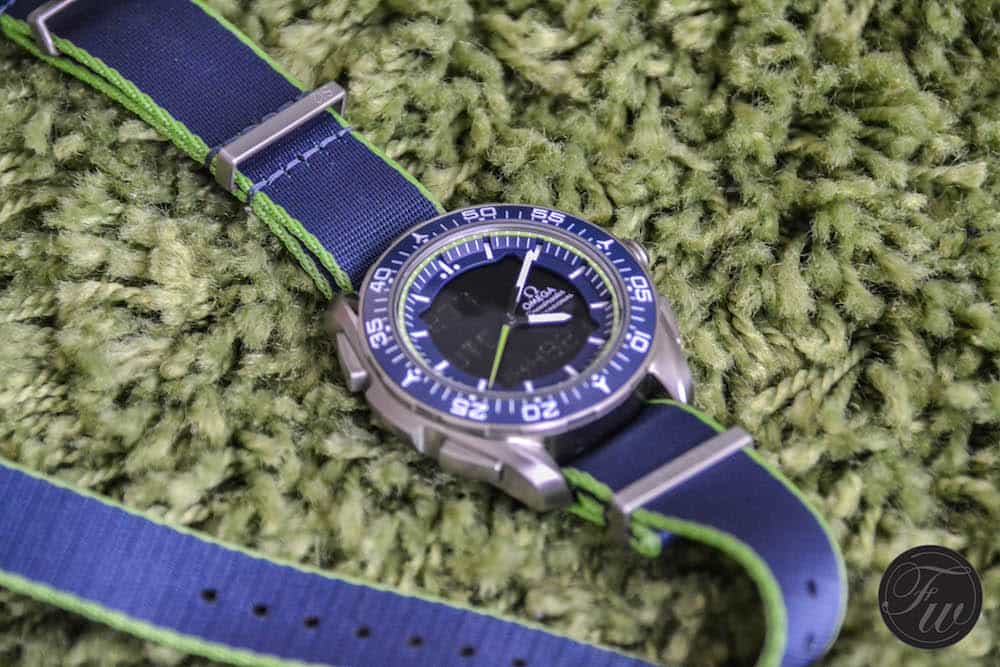 The aim of this limited edition is to “celebrate OMEGA’s unique partnership with Solar Impulse project, whose ambitious aim is to circle the globe in an airplane powered only by the sun.“ I couldn’t have said it better. The watch is made of grade 2 titanium and weights less than 60 grams. With a blue ceramic bezel and Super Luminova coated indexes it is easy to read for the pilots even during night flight. Adding to the lightweight properties, the watch is strapped around the wrist with the aforementioned NATO strap resembling the blue and lime green colors of the watch. It is limited to 1924 pieces. This was the year the first aerial circumnavigation performed by a group of American Army Air Service (predecessor of the Air Force) pilots. 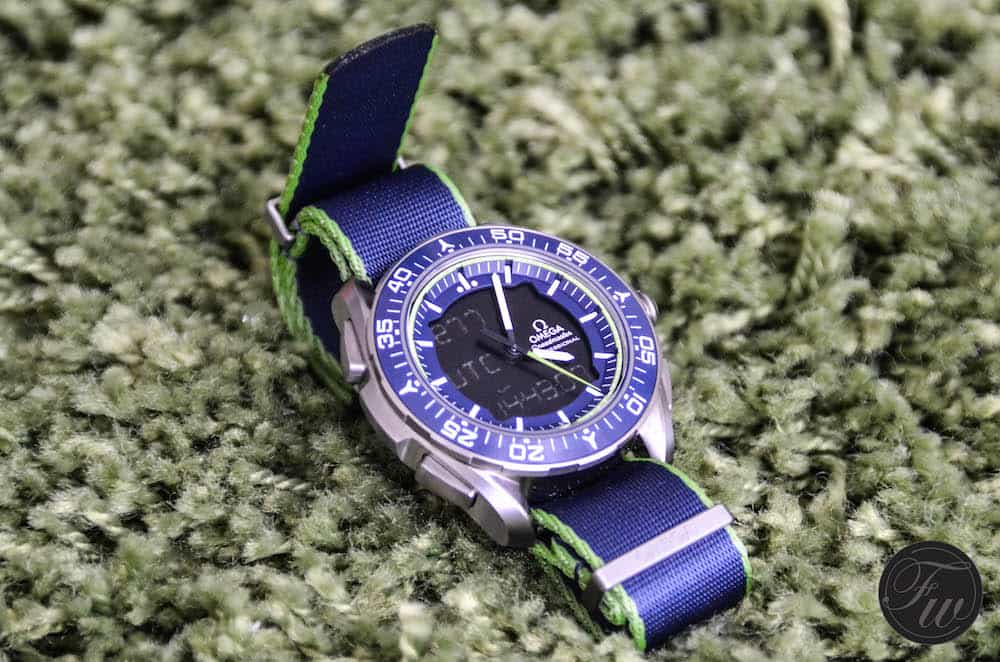 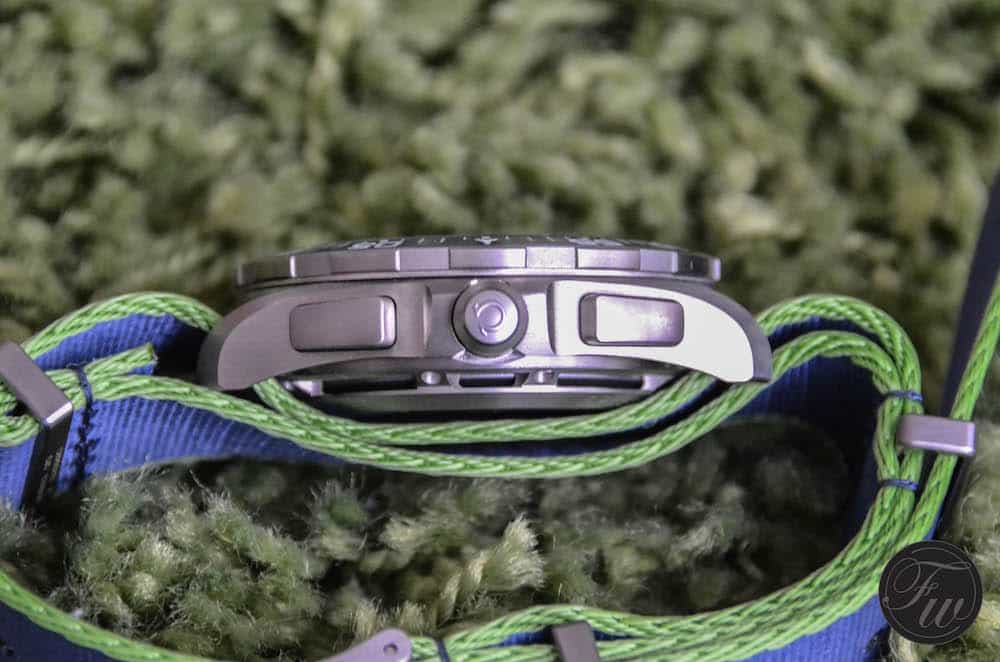 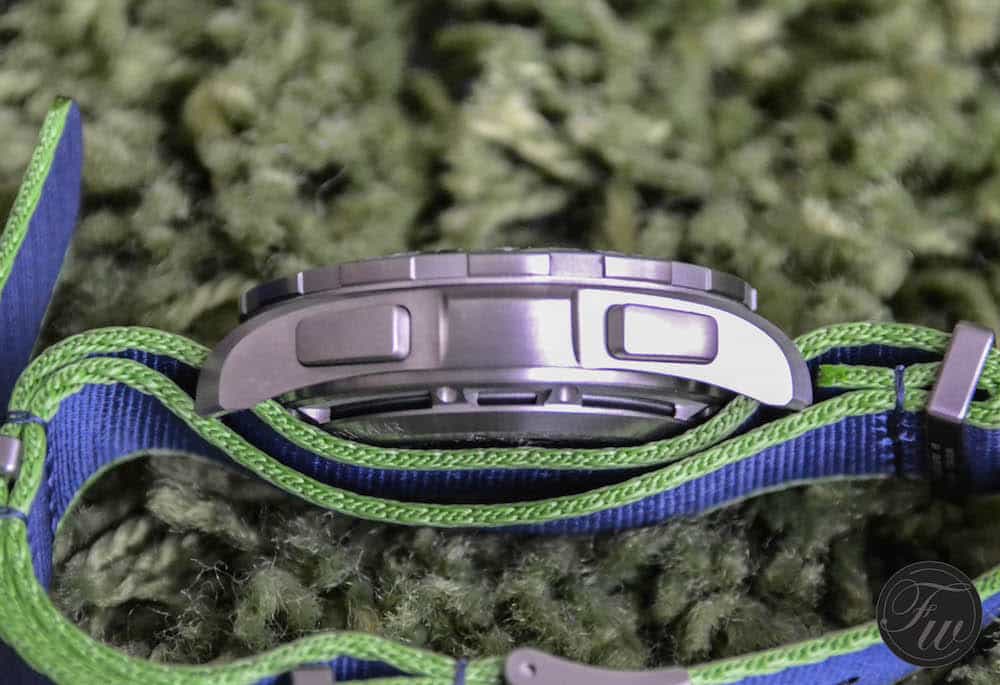 The watch is powered by Omega’s quartz chronograph caliber 5619, which is the same caliber you find in the non-limited version. The interesting feature on the watch, however, is the case back. In the center you see the official Solar Impulse logo with the text “Around the world” on the bottom of it and Solar Impulse above. The top of the case back bears the name of the watch “Speedmaster Skylwaker X-33” while under the Solar Impulse logo you can read the following: “Tested and qualified by ESA”. ESA stands for the European Space Agency, another institution closely connected to the project and of course to the Omega brand. At the very bottom of the case back you see the unique (limited) number. These cool details continue to appear on the strap. If we take a closer look the 3 keepers on the NATO each have a special engraving related to the project such as Omega, Solar Impulse and Si2. 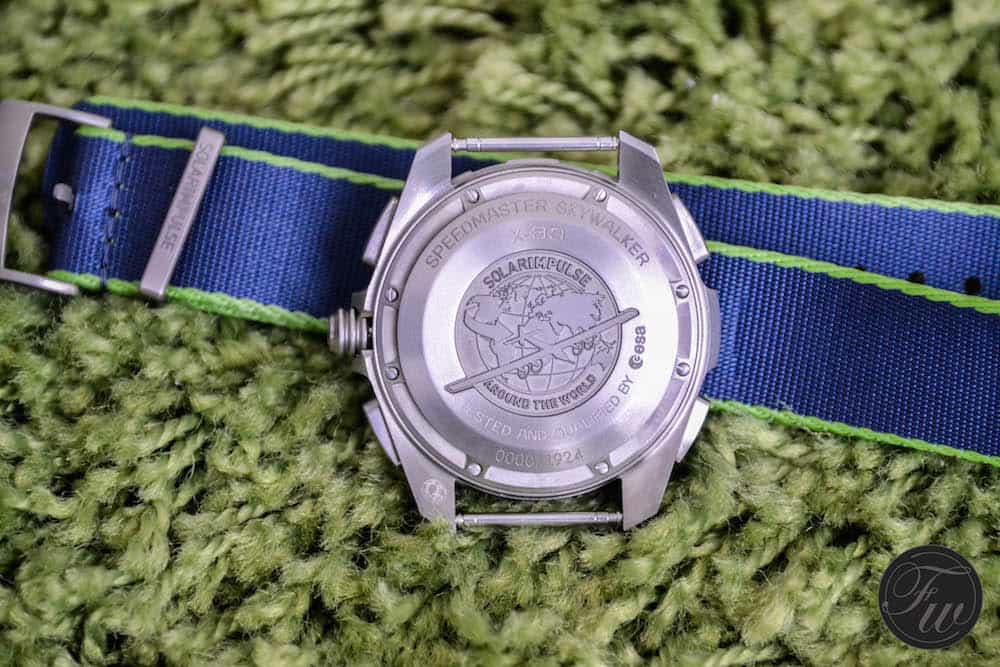 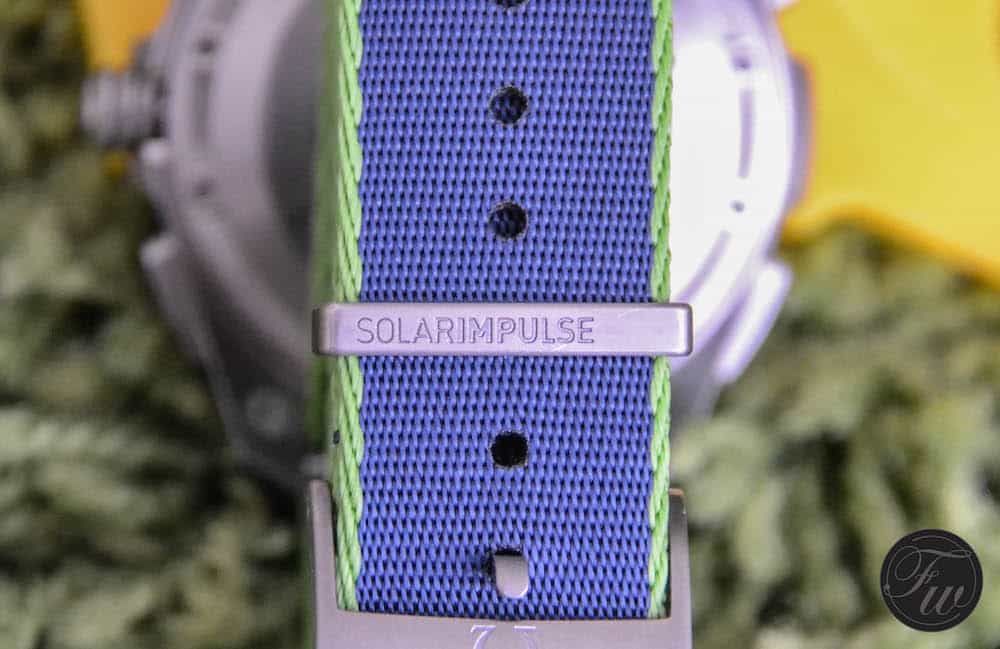 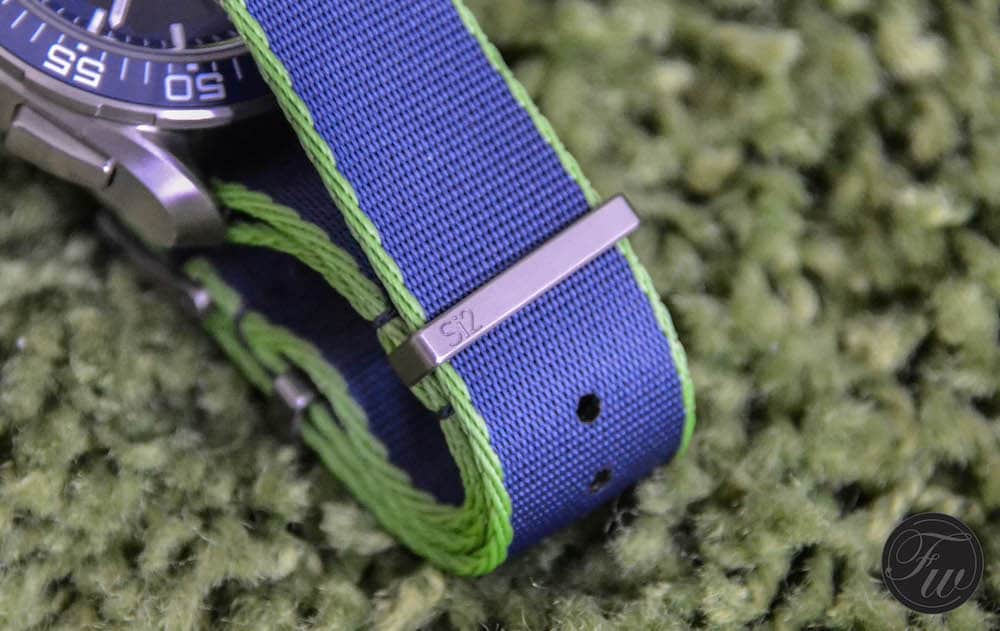 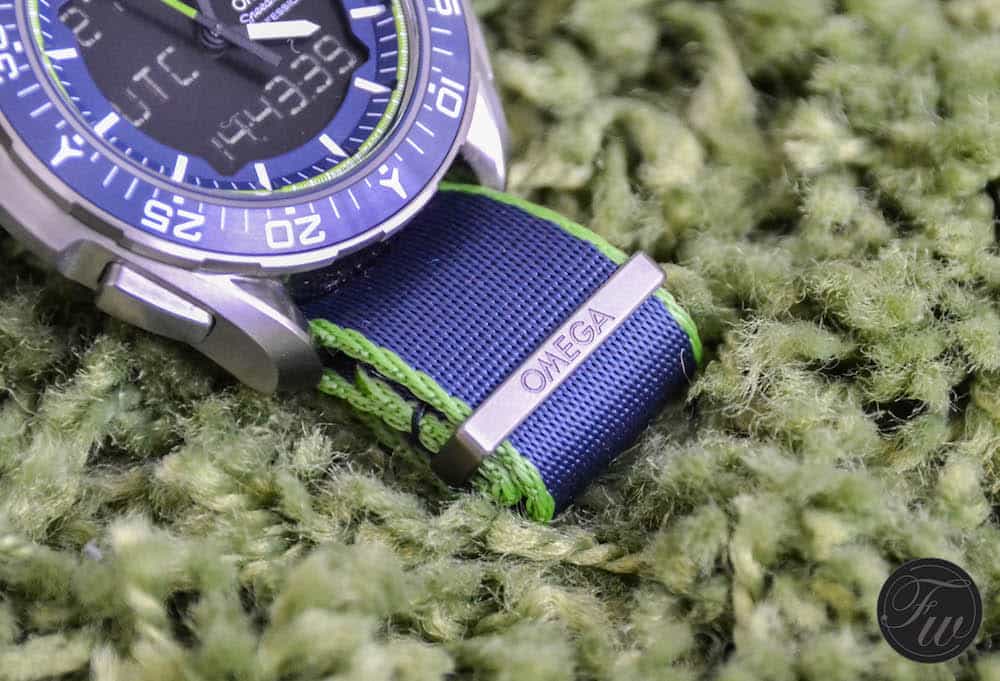 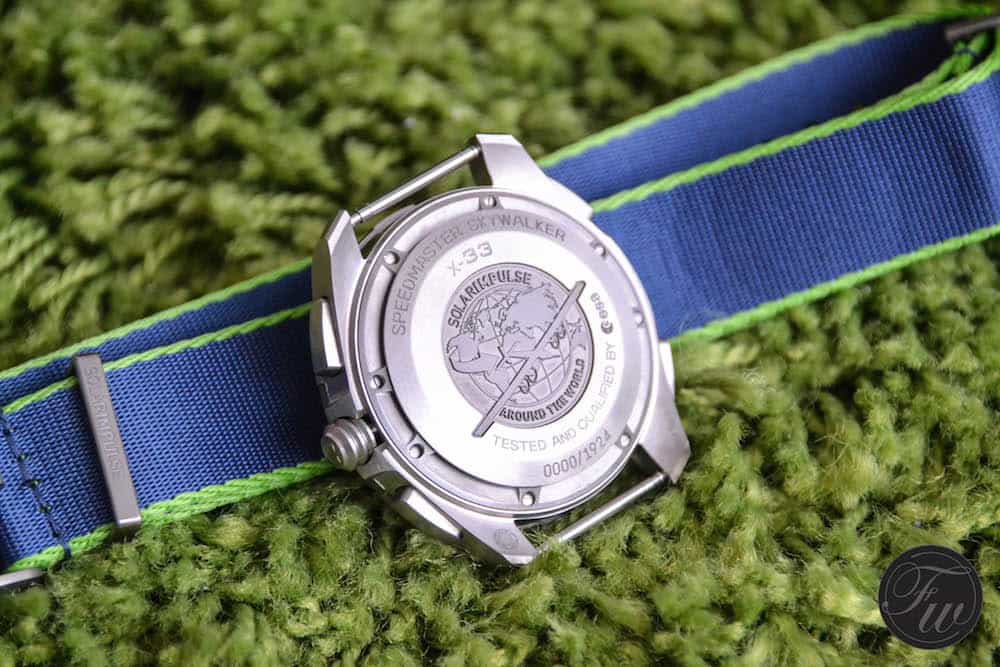 One other great feature of the watch is that you can download an iPad app for it. Well, the downside is that there‘s not another version, iPad only. But it’s free and there are many cool options to choose from; you can see the complete plan of the circumnavigation, try the different functions of the watch, check out the history and Omega’s involvement in the Solar Impulse project and last but not least, learn how to use the many functions of the X-33 through an interactive manual. If you buy the watch and have an iPad, give it a go and I guarantee you’ll have something new to explore for months to come. 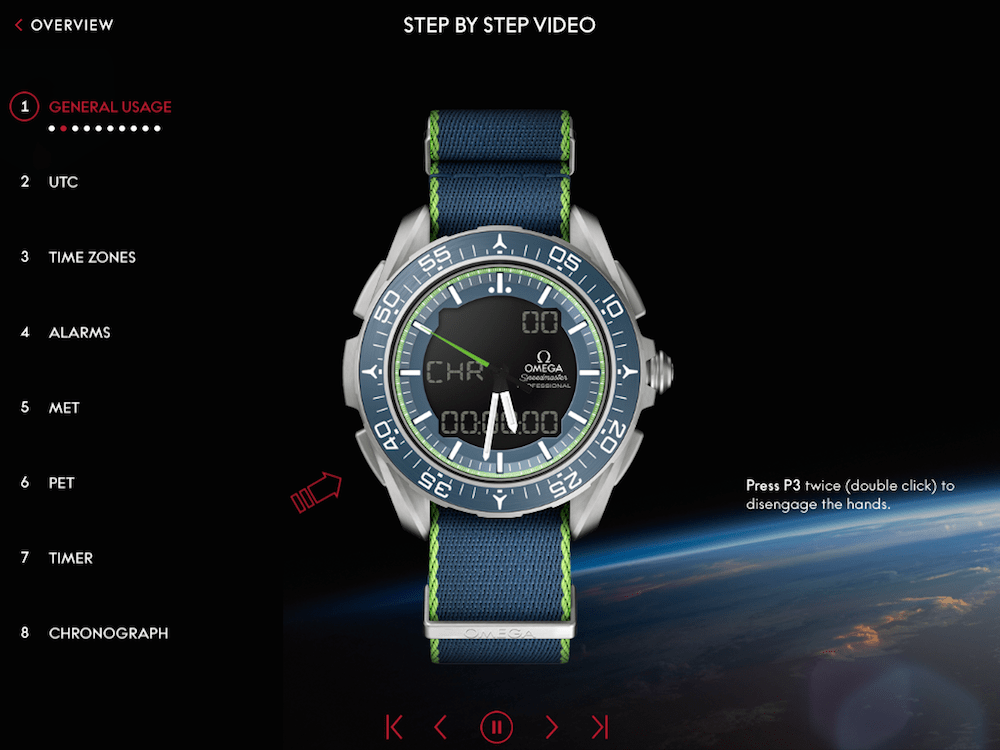 You can try the various functions of the watch 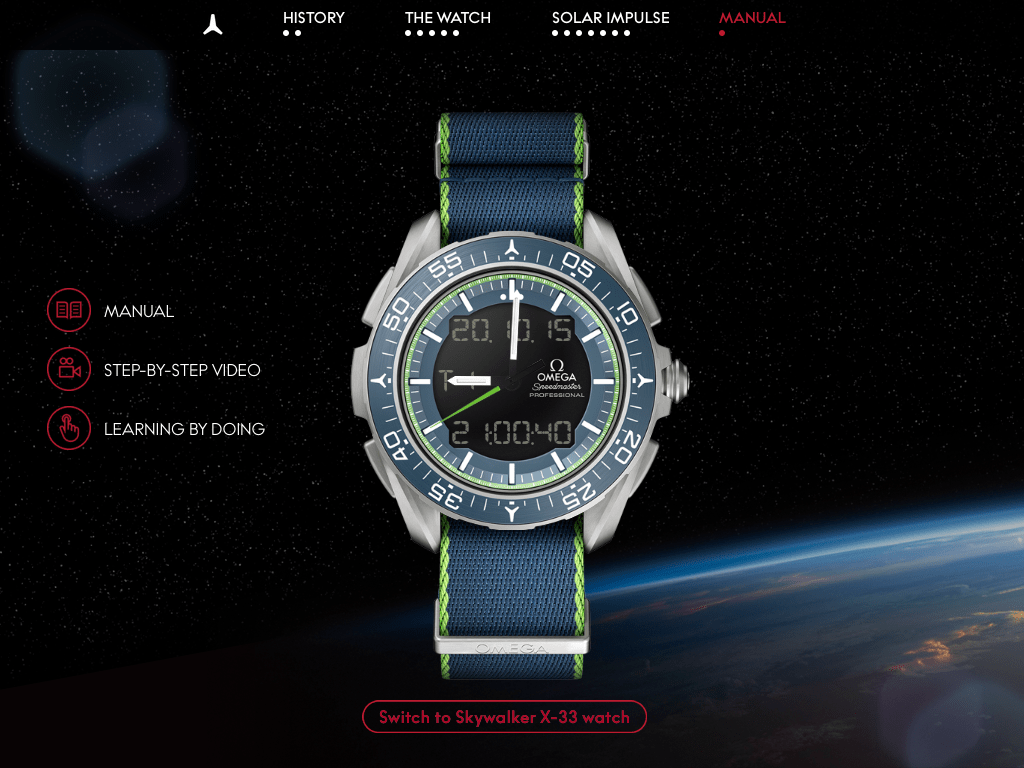 Interactive manual of the watch 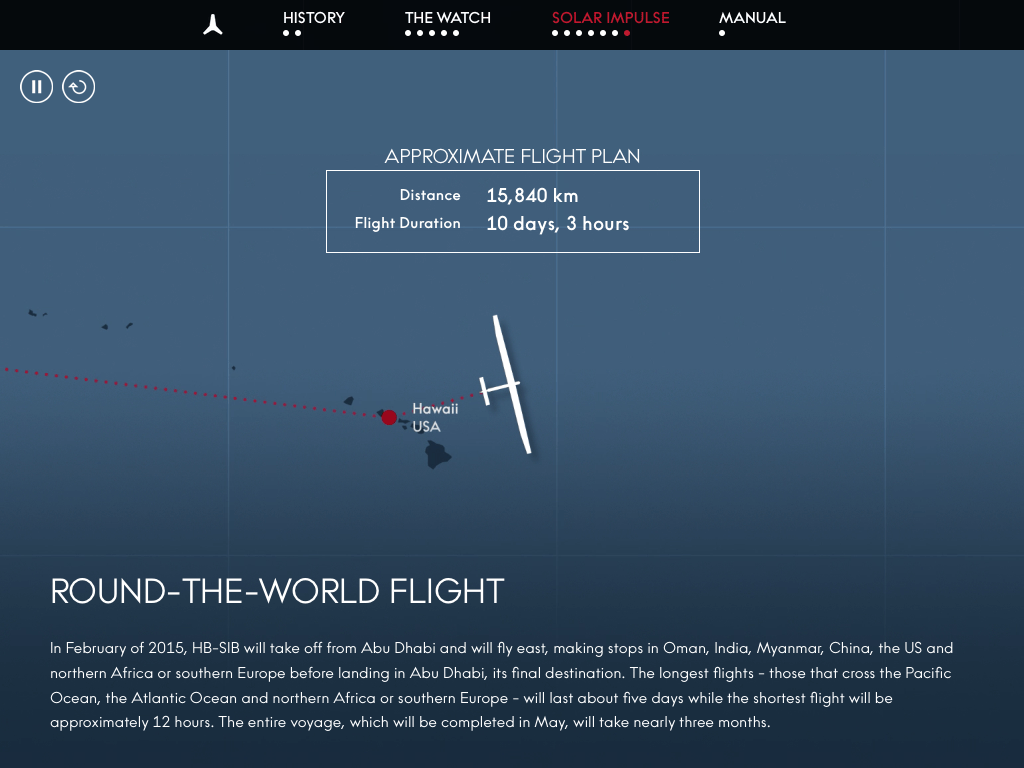 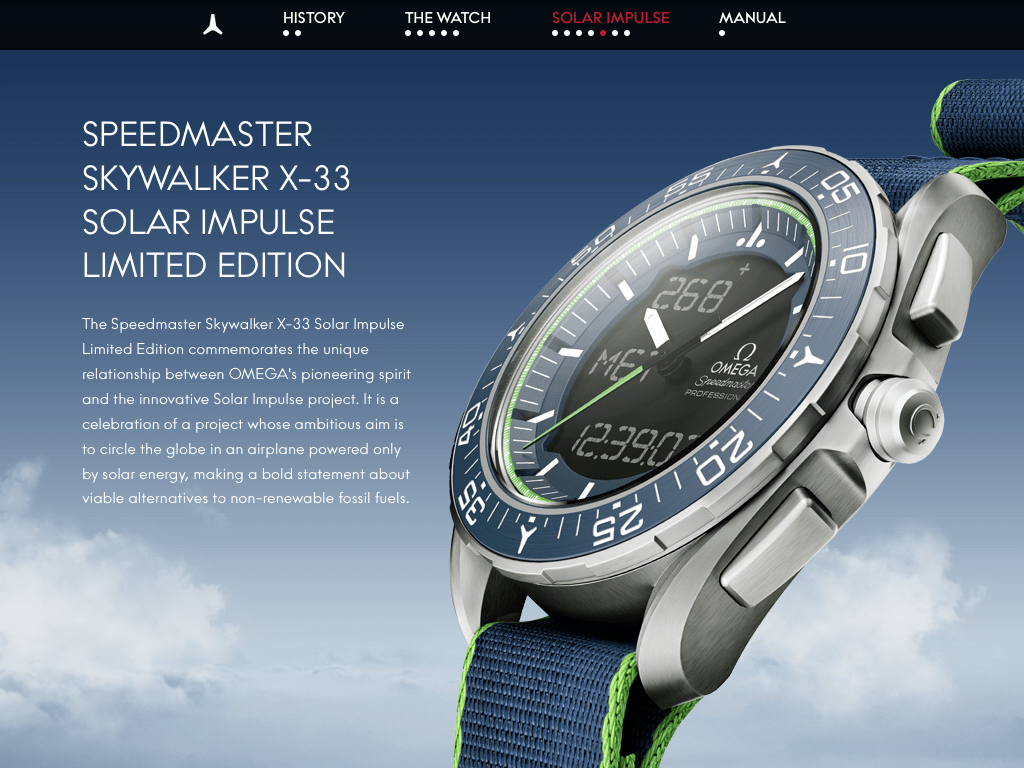 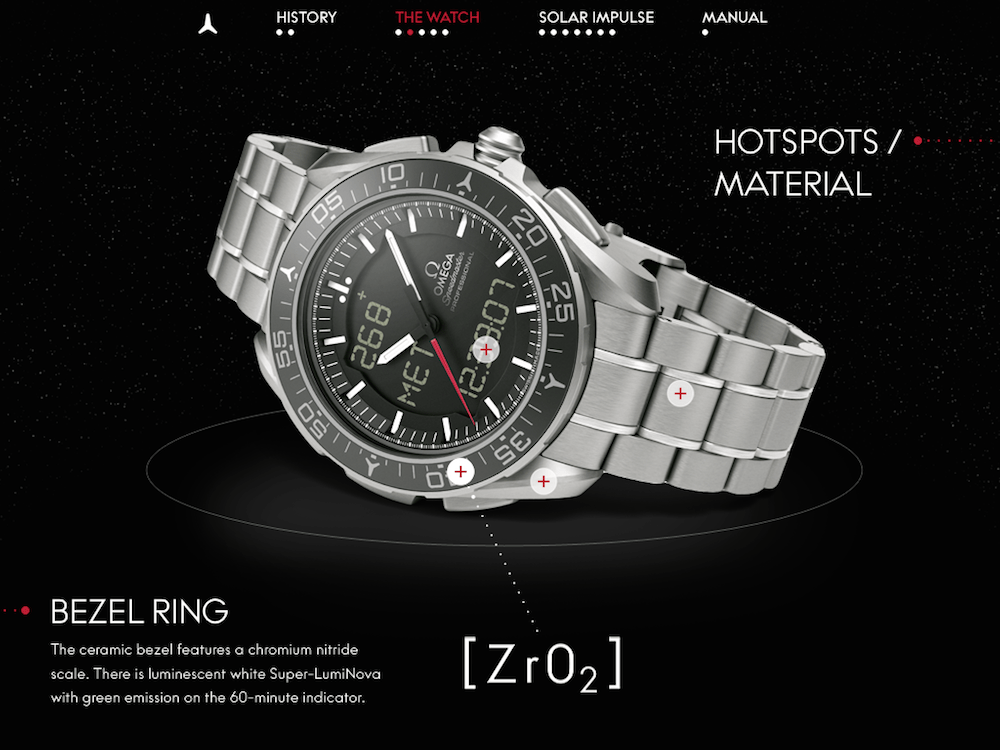 I loved the watch for it’s colorful design and lightweight but hated the fact that I could not work out every feature. It takes time, a lot of time, to get to know all the functions the Omega Skywalker X-33 Solar Impulse has to offer, but once you know your way around it, it becomes pretty handy everyday. Of course an active person could probably use more features than a “desk astronaut” but that is then a personal preference. I wouldn’t be the one to wear the watch everyday, but if you need a cool watch that tells more than time this might just be the one for you. The price of course reflects the materials and technicality of the timepiece with a suggested retail price of €4900. It may sound like a lot for a digital watch, however for a titanium cased, limited edition Omega Speedmaster packed with all this functionality, a piece worn by astronauts it is really not that bad.

For more information on this watch and other Omega models please visit their site.

Hot Topics
Introducing: The Omega Speedmaster Super Racing With Spirate System
165 comments
Design Vs. Specs — Which Is More Important To You When Buying A Watch?
87 comments
New Release: The Limited-Edition Seiko Prospex SLA067J1 Diver
59 comments
My Predictions For New Omega Speedmasters In 2023
57 comments
The Time To Buy Is Now: How The Current Economic Climate Influences Watch Buying And How You Should React
51 comments
Popular
A Question From A Reader: “Which Modern Speedmaster Is Closest To The Original Moonwatch?”
Robert-Jan Broer
14
Two Patek Philippe Nautilus Watches: 3700/1A Versus 5711/1A
Robert-Jan Broer
16
You Asked Us: Tissot Powermatic 80 Seastar 1000 or Longines HydroConquest
Robert-Jan Broer
20