Whether it’s pedal to the metal or time for the rubber to hit the road, TAG Heuer has you covered with the new Formula 1 Special Edition in collaboration with Red Bull Racing. The brand’s latest iteration of the Formula 1 chronograph comes on either a metal bracelet or a rubber strap. In the familiar colors of the Red Bull Racing livery, this is a perfect watch for all racing fans out there. TAG Heuer and Red Bull Racing celebrate the success of their partnership, which has reached new heights since its start in 2016. The team’s driver Max Verstappen recently became Formula 1 world champion and went on to wear a TAG Heuer watch on the podium. Surely, that says it all!

When I think of motorsport, the first watch brand that comes to mind (in spite of Rolex’s best efforts) is TAG Heuer, with legendary models like the Autavia, Monaco, and my personal favorite from the past, the Jarama. Jack Heuer first established the brand’s bond to Formula 1 racing back in 1968. Since then, the brand has remained ever-present in the world of motorsport. So, whether you’ll be timing your boiled eggs, commuting times, or a hot lap on a track-day weekend, if you’re a fan of Formula 1, Red Bull Racing, TAG Heuer, or all of the above, this is the perfect watch for you. Let’s take a closer look at the details that make this chronograph stand out in the crowd, or rather, on the starting grid. 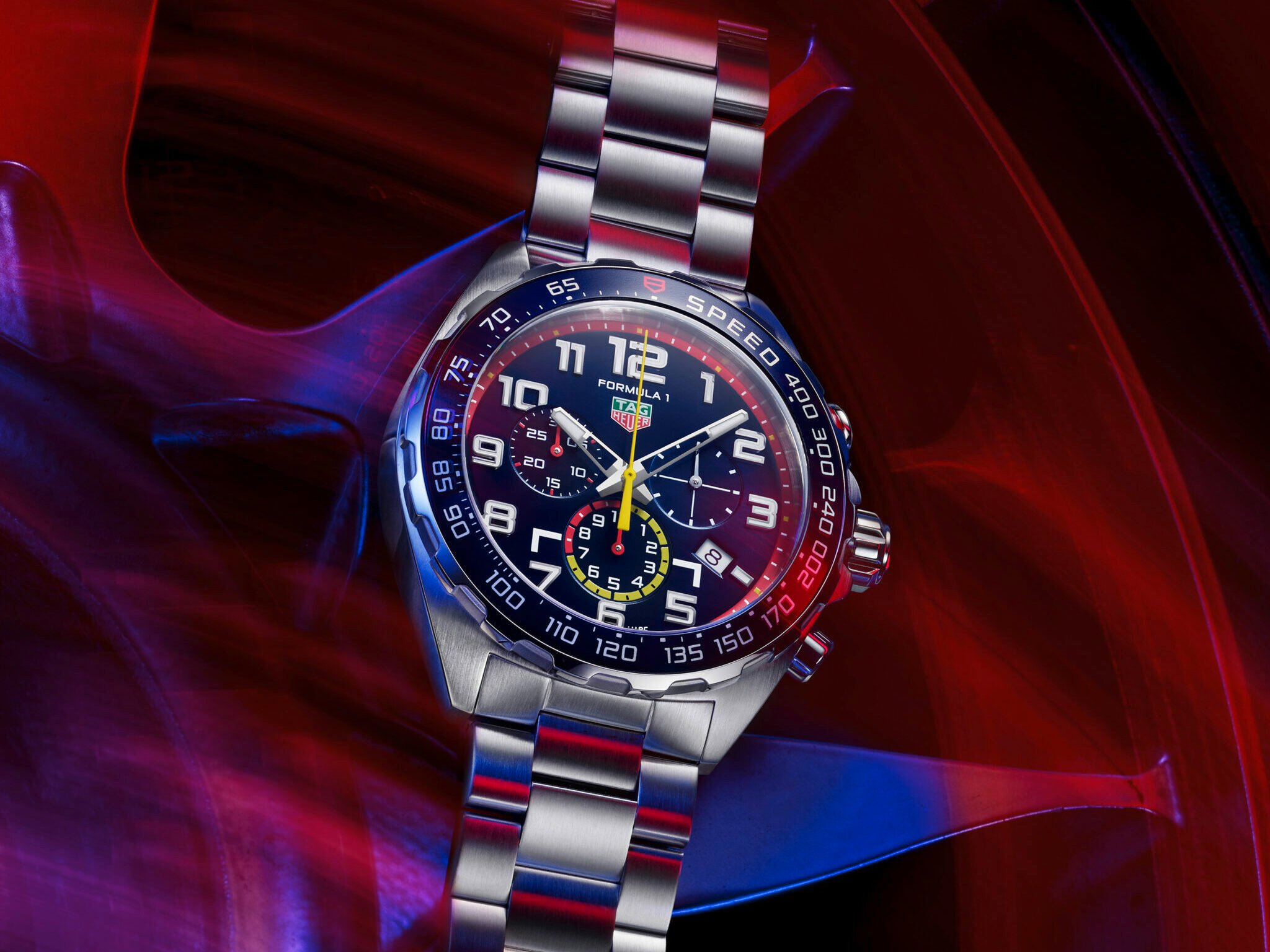 This latest addition goes above and beyond those first fiberglass-coated time-only models, while still maintaining plenty of charm. True to the original TAG Heuer Formula 1 models, this special edition features a quartz movement inside its 43mm steel case. Red Bull’s signature shade of dark blue is used on the sunburst dial as well as the aluminum tachymeter bezel. On the bezel, you’ll also find the word “SPEED” above the 400 units-per-hour indication. This is instead of the usual “tachymetre” that appears on the standard models, whose tachymeters only indicate up to 240 units per hour. Though this watch is, first and foremost, a racing chronograph, it doesn’t disappoint as an all-around sports watch either. It also boasts 200 meters of water resistance should you wish to go for a dip after the race.

The solid case back features the Red Bull Racing logo above a checkered-flag pattern with the TAG Heuer logo on it. Other neat details unique to this special edition include the red ring around the top pusher, the markings on either side of the 6 o’clock register (which represent the lines drawn on the starting grid of the track), and the generous use of color on the dial and hands. In addition to the Red Bull Racing blue, you’ll find splashes of red on the minute track, the 9 and 6 o’clock registers’ hands, hash marks, and the last quarter of the 1/10th of a second counter. Yellow is also present on the central chronograph hand and the other three-quarters of the 6 o’clock register. A date window can be found at the 4 o’clock position on the dial. 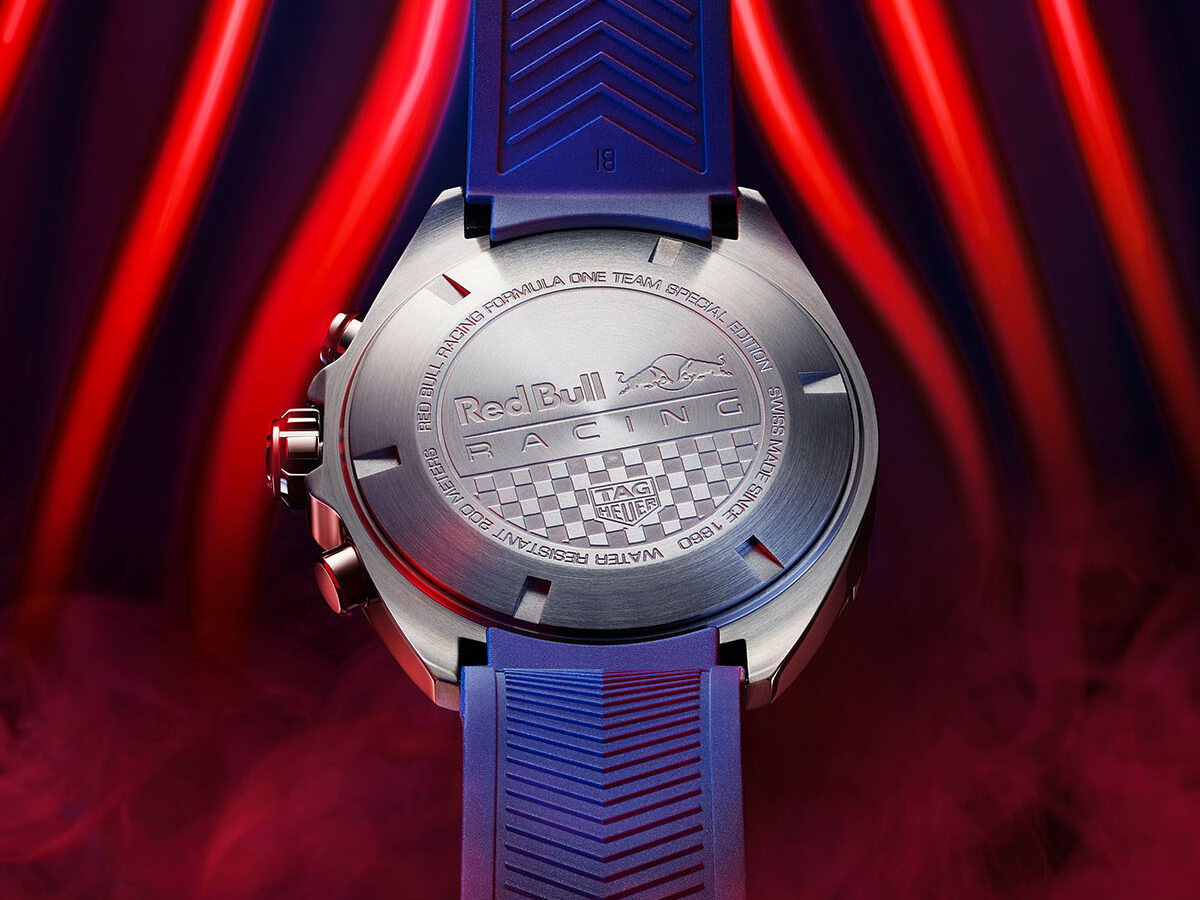 To conclude, I would say that the use of the Red Bull Racing team’s livery on the TAG Heuer Formula 1 chronograph is a match made in heaven. It’s fun, sporty, and ties in perfectly with the brand’s racing heritage. Plus, should you just be a fan of the watch itself, all Red Bull branding is limited to the case back. The only question would be whether you’d opt for the classic three-link stainless steel bracelet or the matching dark blue textured rubber strap. Personally, I’d go for the rubber strap for the ultimate sporty look.

For more information, head on over to TAG Heuer’s website.

Let us know your thoughts on the new TAG Heuer Formula 1 × Red Bull Racing SE in the comments down below! And make sure to check out our special TAG Heuer podcast episode on Max Verstappen’s victory in the Formula 1 World Driver’s Championship here.