Will the "Null Primero" catch on this time around?
Brandon Baines
comments 20
Share

Happy Monday to you, Fratelli, and what a Monday it is! Today is the start of LVMH Watch Week, and that means we’ll see a plethora of new watch releases. The group’s watch brands — TAG Heuer, Hublot, Bvlgari, and Zenith — all have a bunch of new stuff up their sleeves. So allow Jorg and I to kick the week off with a few of the first new watches that caught our attention. In Jorg’s article, he’ll be showing you some highlights from Hublot, while I’ll be introducing the new Zenith Defy Skyline.

Last week, Daan de Groot made his editorial debut on Fratello, writing about the new Zenith Defy Revival A3642. It’s a near-spitting image of the first Defy wristwatch that Zenith released back in 1969. And in terms of the design, Daan was a big fan. But as a limited edition of just 250 pieces, it appears the A3642 has already sold out. Zenith teased that the release was but an appetizer — a taste of things to come in the expanding Defy line. That made Daan a bit apprehensive, however, as he suspected that Zenith might take “modern” too far. Today, with the release of the Defy Skyline models, we’ll see if his suspicion has become a reality. So let’s first check out the watch, see what it’s all about, and then entertain the idea of a chronograph-less El Primero. 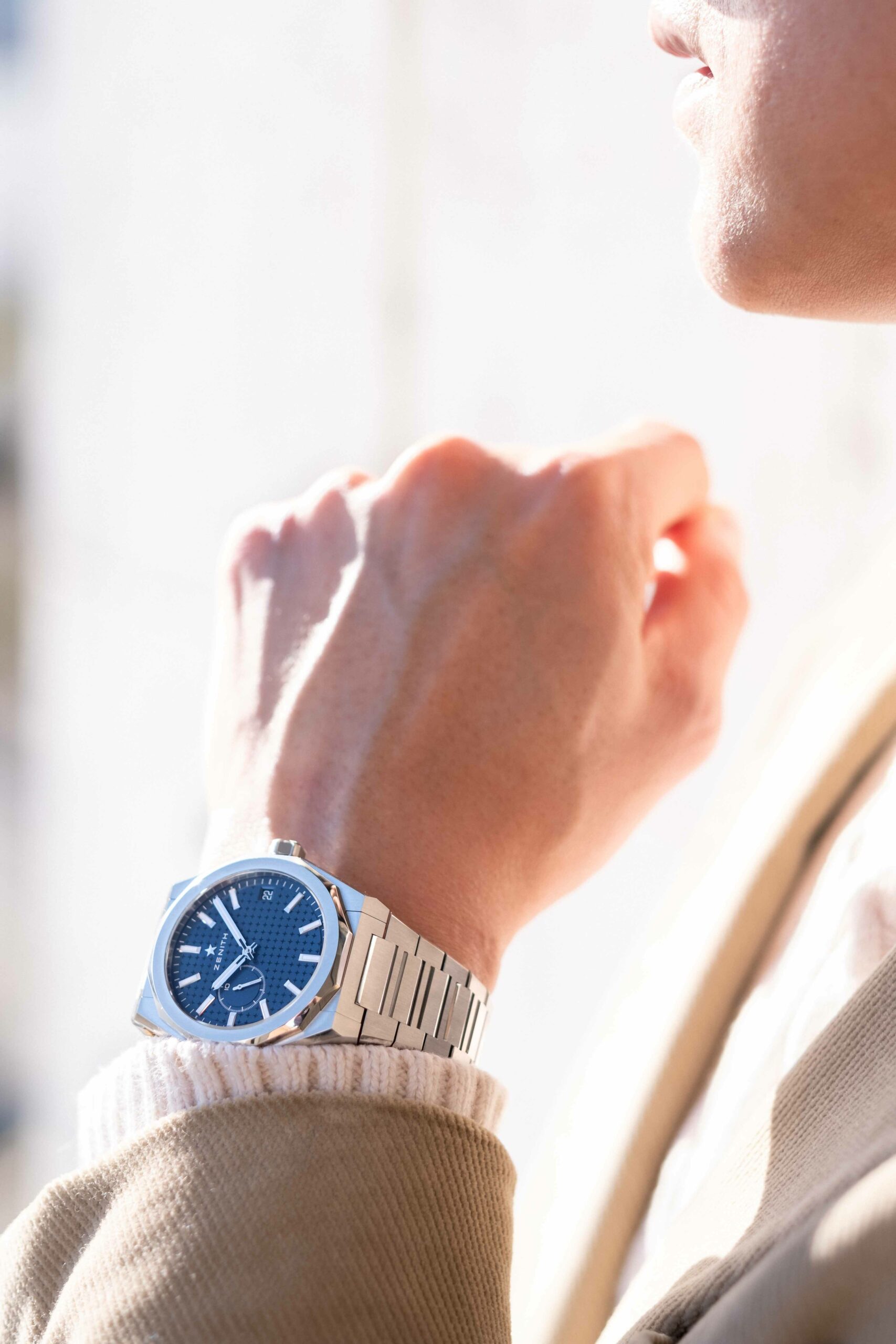 Though the Defy Skyline looks far more modern than vintage, its design is familiar in all the right ways. Those who are familiar with the Defy Classic and El Primero 21 will see great similarities. From the octagonal case shape with its generous bevels to the seamlessly integrated H-link bracelet, this form has been a hit since its debut a few years ago. But this time, though the case remains thoroughly modern, it does receive a touch of the “heritage treatment.” 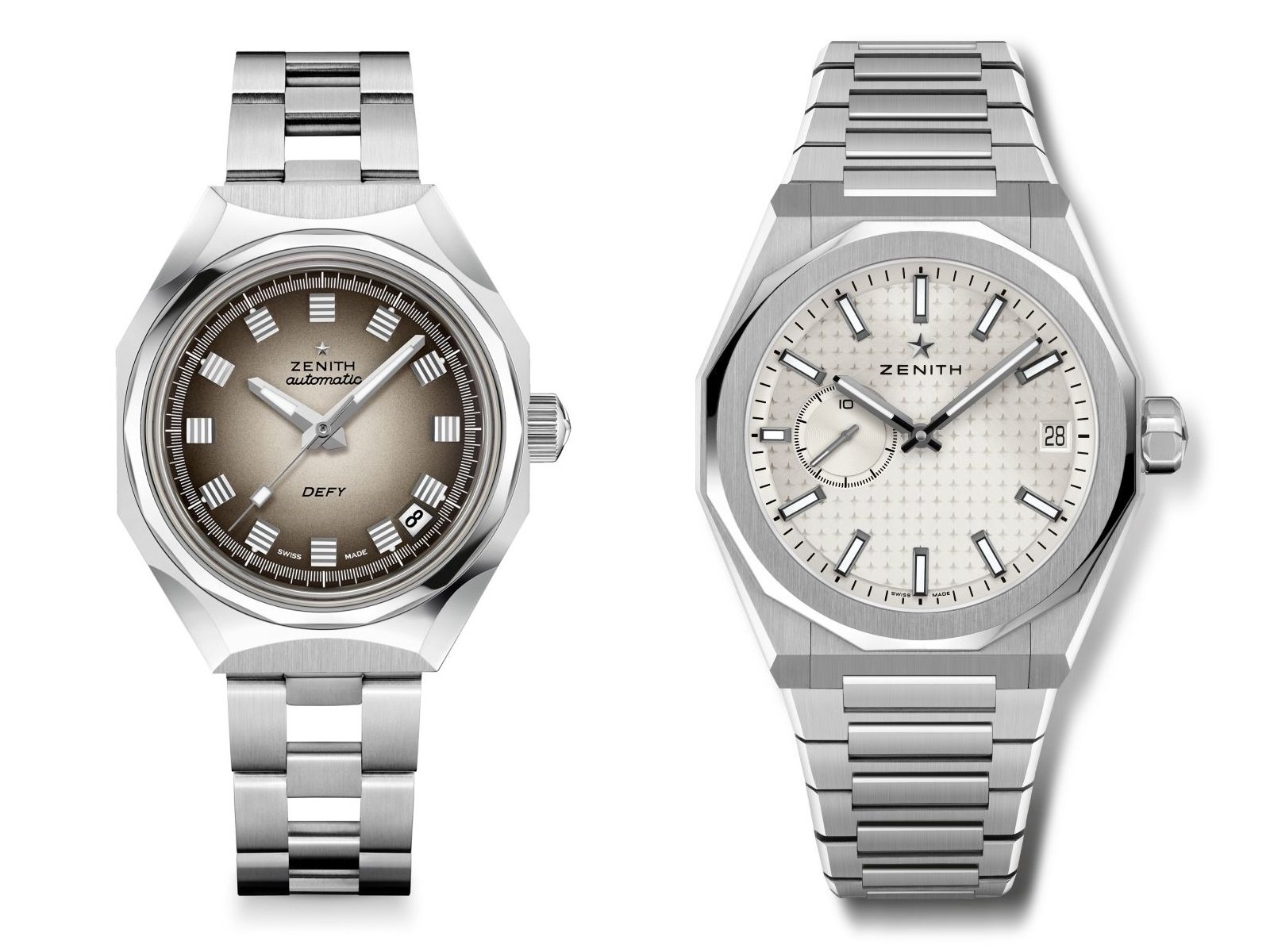 Side-by-side with the Defy Revival A3642, the new Defy Skyline looks fresh out of the womb. There’s no ladder bracelet, no fumé dial, and no super-funky eight-bar indices. And while the lack of scalloped lugs may be sad news for some, the lack of a four-thirty date window is great news for all! But the Defy Skyline does give a nod to its forebear through its use of a truly multi-faceted bezel. The first Defy’s bezel had 14 sides, whereas the latest Defy’s bezel has a more logical 12. Each side corresponds to its own hour marker, much like the bezel of the Defy Extreme. 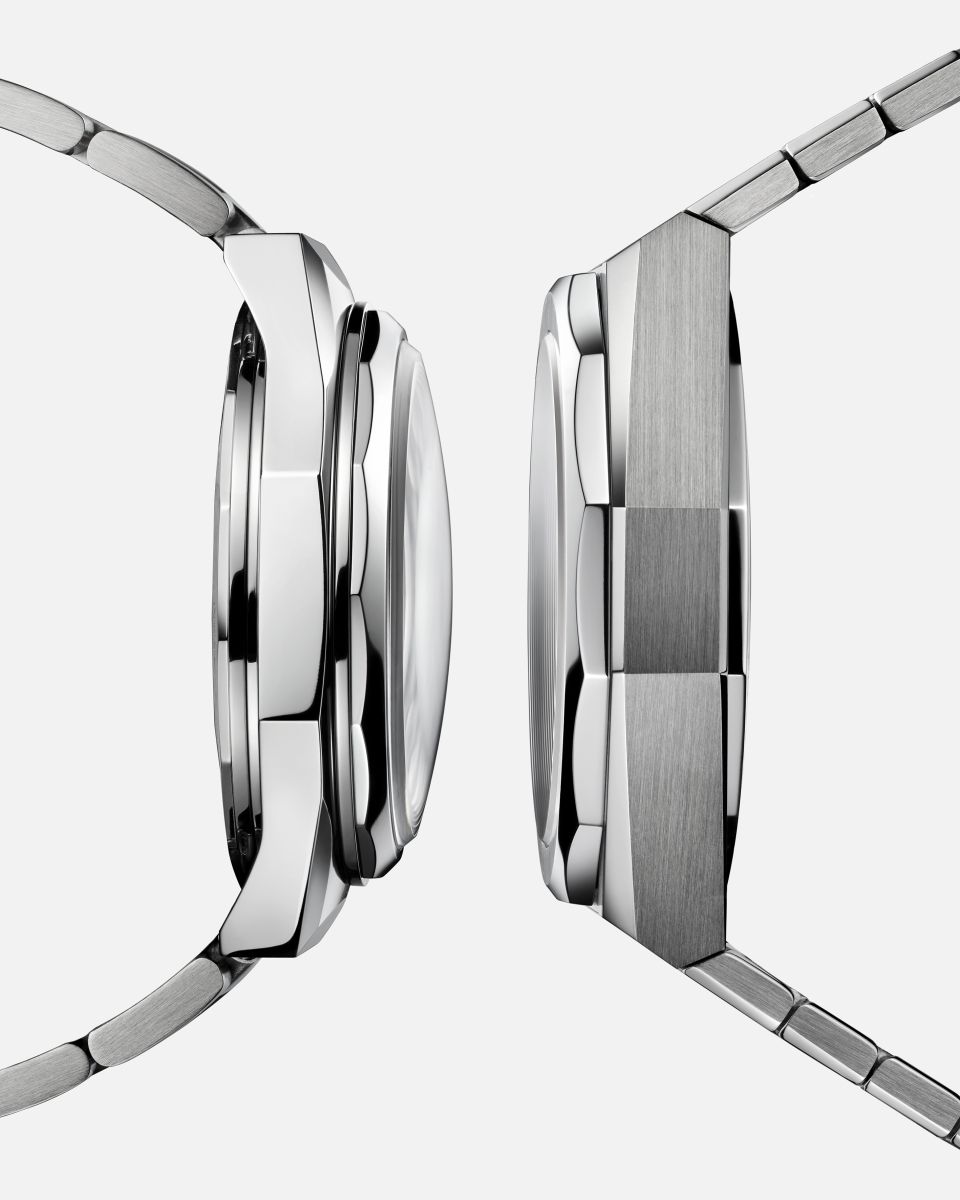 The Defy Skyline maintains the octagonal form loosely inspired by the A3642. But in this case (pun intended), the design is more blocky, featuring brushed sides, stout lugs, and a flat sapphire crystal. In keeping with the modern Defy Classic specs, the Defy Skyline measures 41mm in diameter. As of writing, there’s no word on the lug-to-lug length, but I’d expect it’s 45mm, just like the Classic. There’s also no word on the thickness as of yet, but it may be thicker than the Classic due to a new movement. 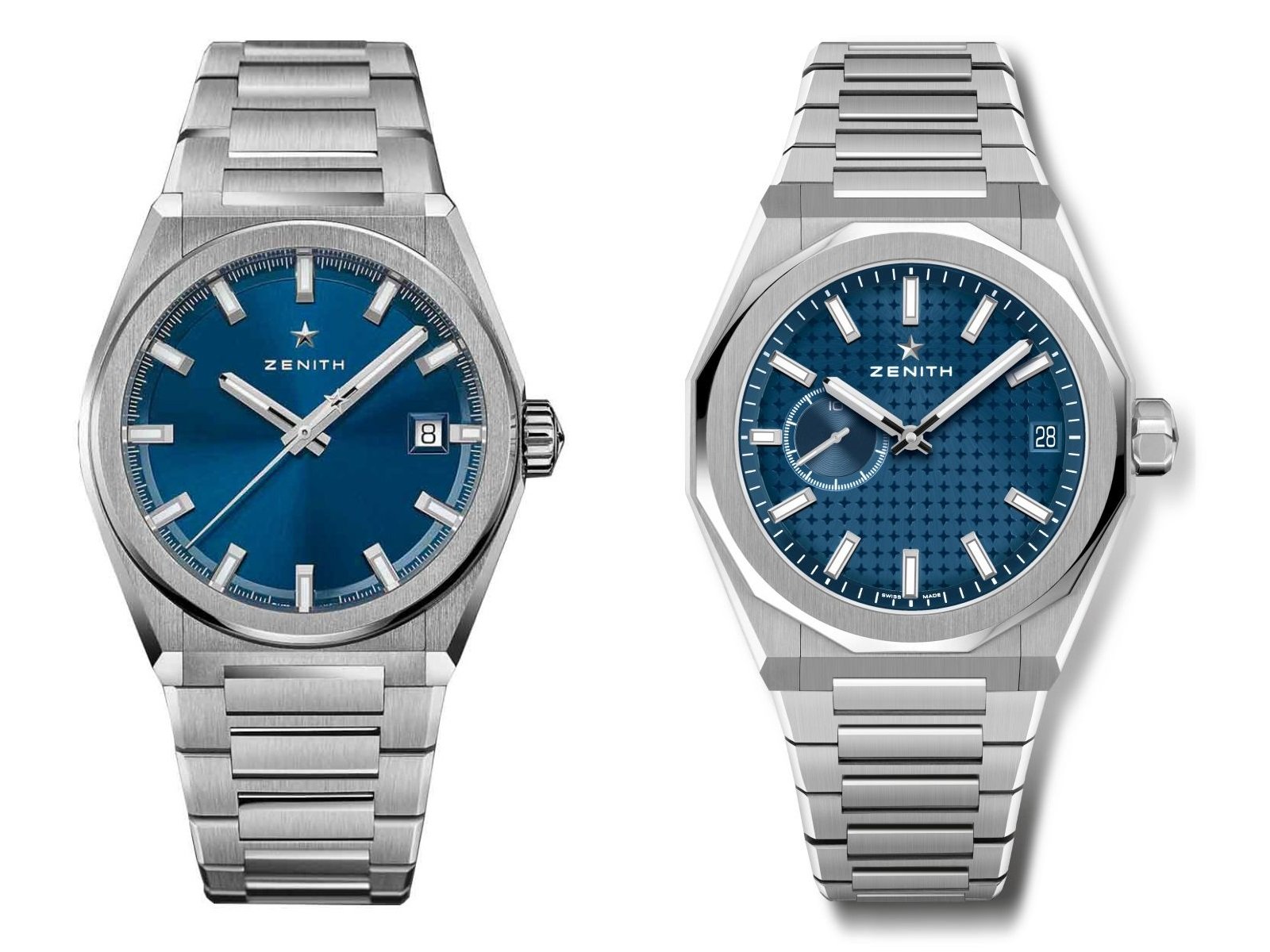 Though the Defy Skyline’s style is heavily based on the Classic, there are a few slight differences that jump out at me. The first is that the Defy Skyline is all stainless steel, whereas the Defy Classic was made of titanium. The bezel now has a dodecagonal shape, but it’s also noticeably wider, and so are the lugs. In turn, the Skyline’s dial also appears smaller, but with a cleaner minute track that now looks more pronounced. And whereas both dials have a brilliant sunburst finish, the Skyline also has a brand-new star motif. These stars hearken back to an old Zenith logo, the four-pointed star found on many vintage case backs. Mike Stockton’s El Primero A386 has it, and the original Defy A3642 did as well. The lumed indices on the Skyline are also a bit longer, but they retain the faceted shape Zenith has used since the 2000s. 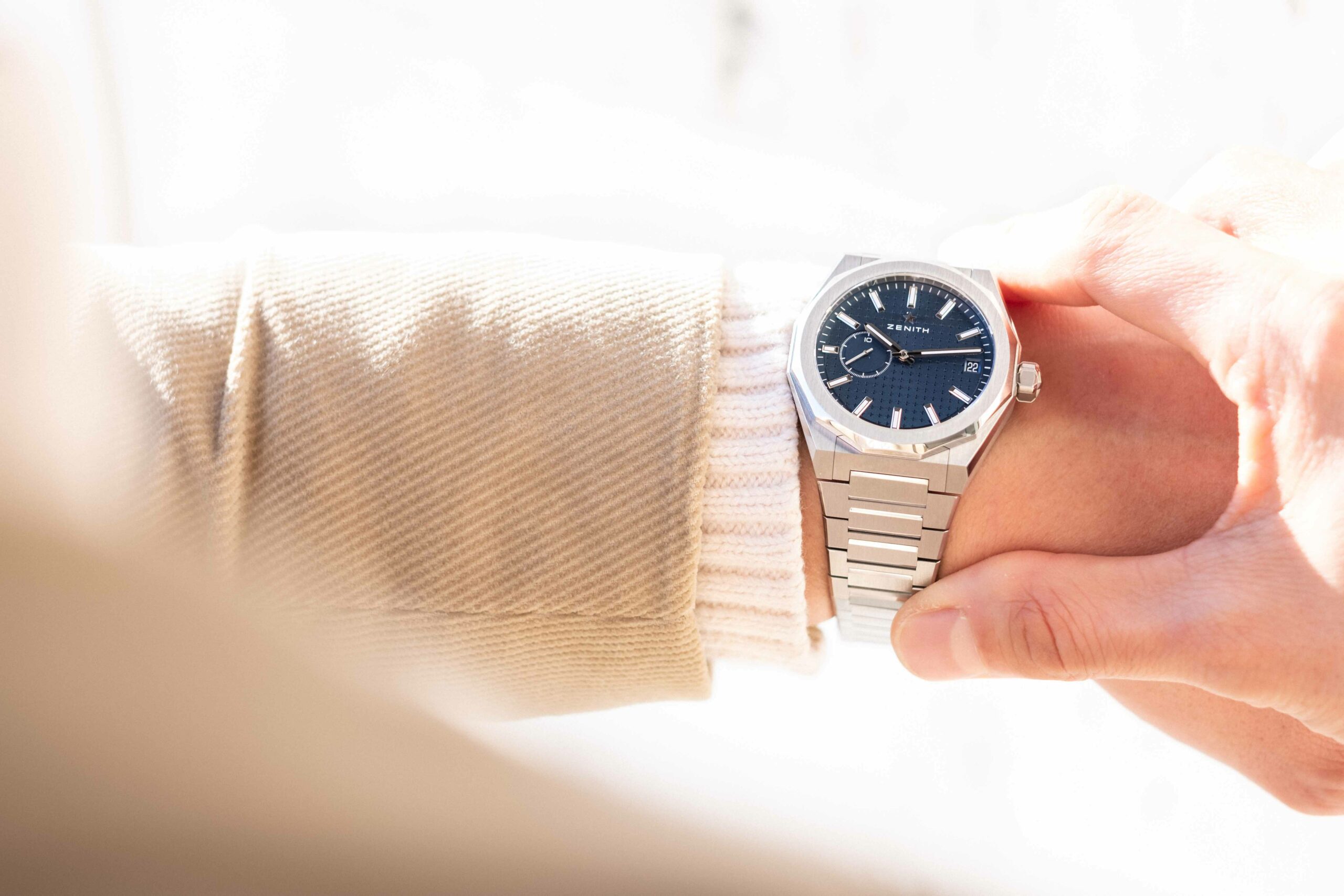 The hour and minute hands are done in typical Zenith style, but they now have a chiseled, handle-like base. The 3 o’clock crown has been updated too, with much-larger knurling and a more pronounced shape. A date window remains at the 3 o’clock position, but it now features a new color-matched date disc. This is the type of detail many watch fans appreciate, as it does a better job of remaining inconspicuous. 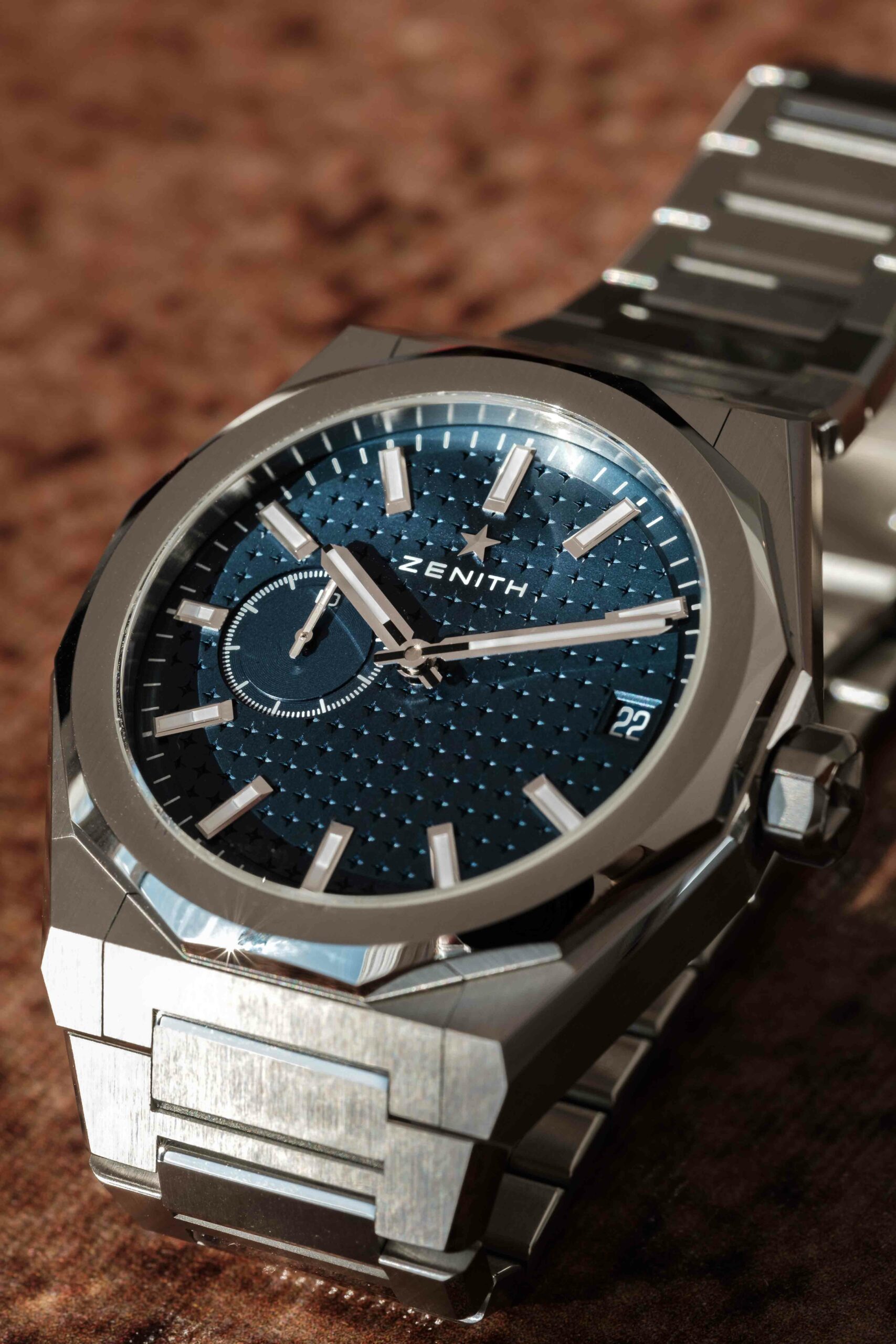 But, arguably, the most significant change is the new sub-register at the 9 o’clock position. At first glance, you might think it’s a run-of-the-mill small seconds indicator, and therefore, nothing special. That is until you notice that the only numeral at the top of the register reads not 60, but 10. Then you notice that each of the larger hash marks is followed not by three smaller hashes, but nine. That’s right, dear Fratelli — it’s a small seconds indicator, but the hand makes a full sweep in just ten seconds. This is all thanks to a brand new caliber, the chronograph-less El Primero 3620. 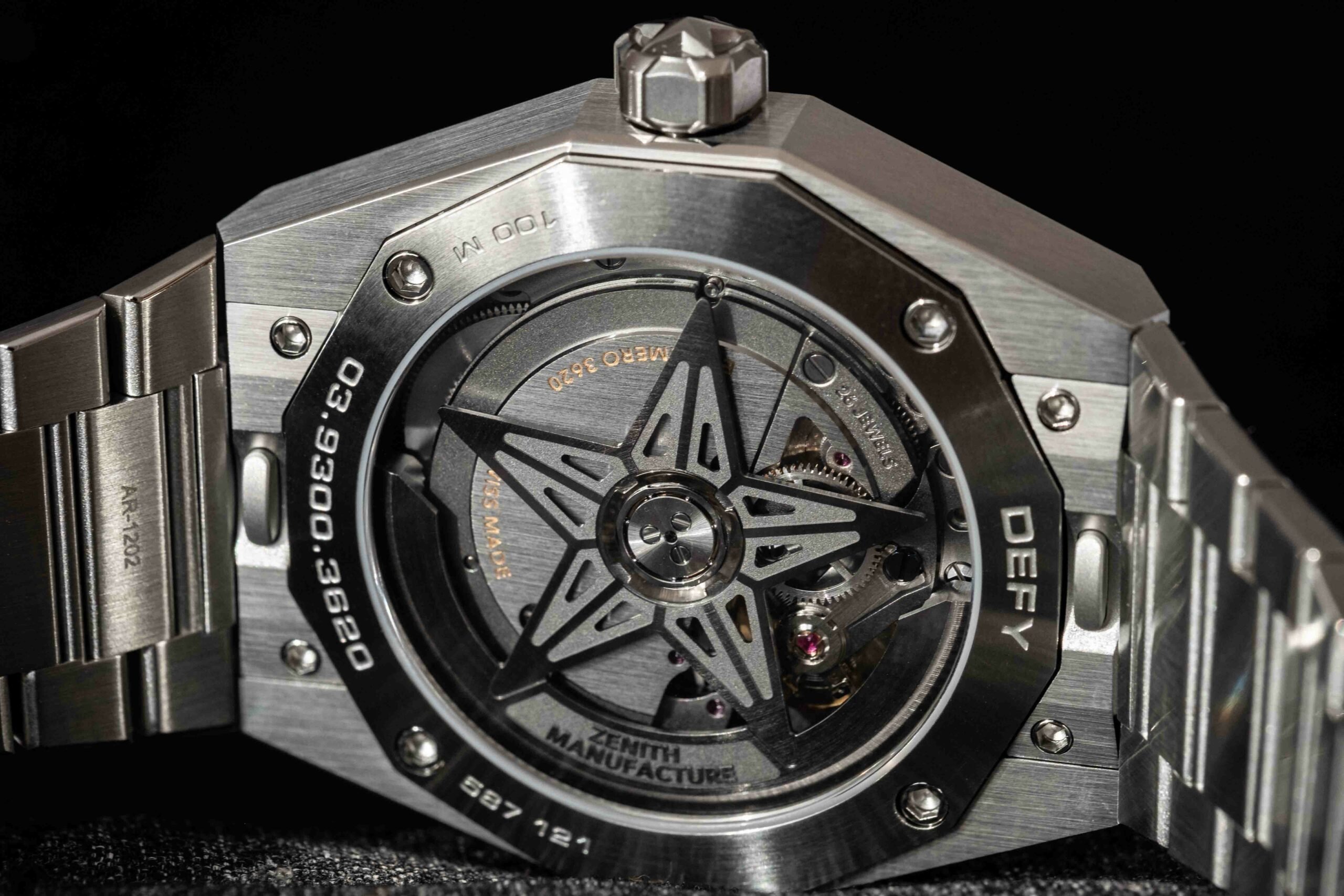 This brand new in-house movement from Zenith is based on the El Primero 3600. That’s the movement found in the Chronomaster Sport and the A386-throwback Chronomaster Original. Zenith says it is built on a similar architecture, and therefore, it offers several similar specs. The most important ones are the 60-hour power reserve, the hacking function, and the El Primero’s 5Hz frequency. Beating at 36,000 vibrations per hour is what allows for 1/10th-of-a-second precision. It’s a trait that the El Primero has always been known for, and these days, Zenith puts it to great use indeed! In the caliber 3600, the central chronograph hand makes a sweep of the dial once every ten seconds. It’s incredible, but it’s only visible when the chronograph is running. The caliber 3620 in the Defy Skyline, however, allows the wearer to enjoy that feature all of the time — the obvious tradeoff being the lack of a chronograph function. 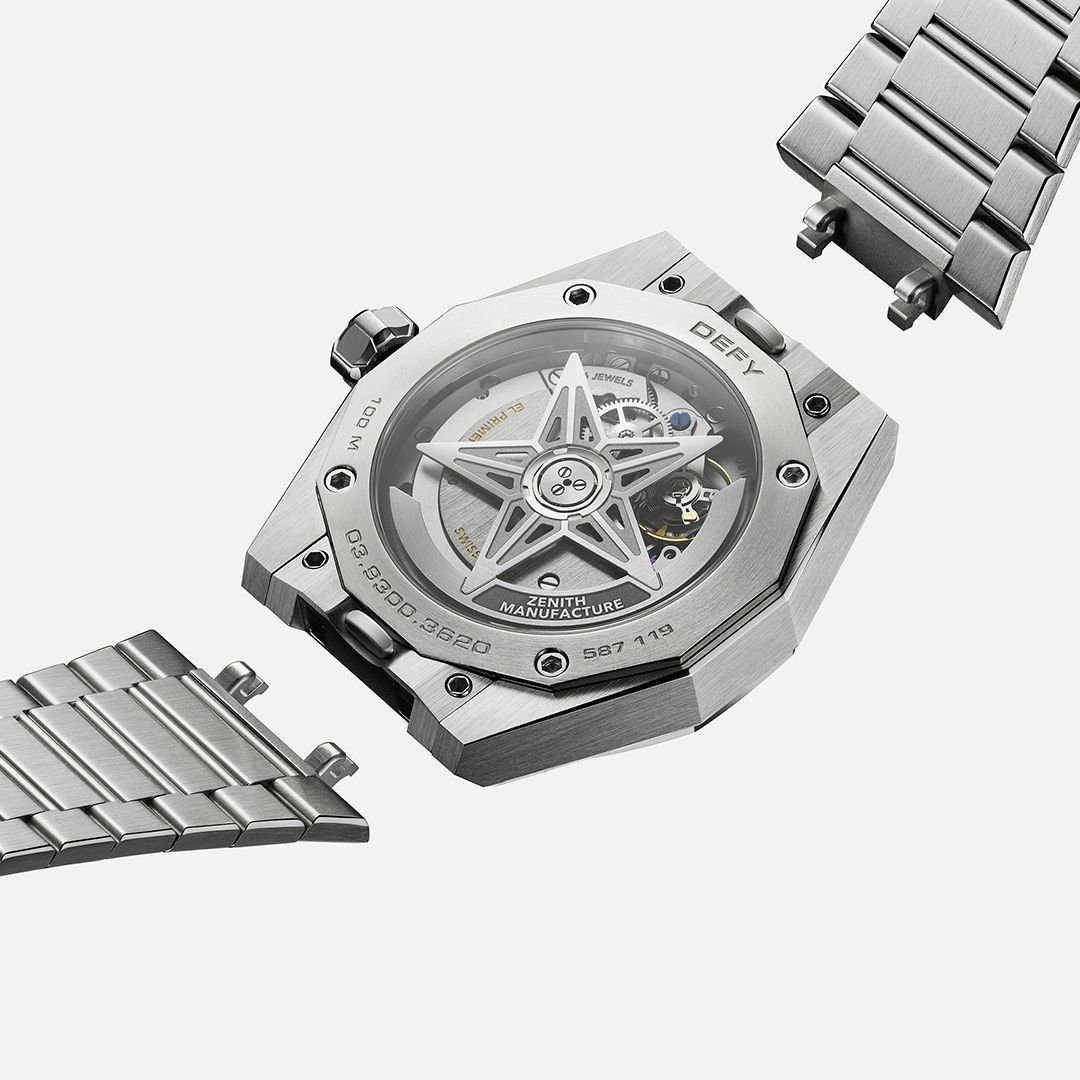 The 26-jewel caliber 3620 is decorated with a thoroughly modern brushed and blasted finish. Its silicon escapement provides not only less friction — meaning more reliability and greater precision — but it also gives a hint of visual dynamism with its rapidly turning, color-changing escape wheel. The movement, with its nicely finished Zenith-star rotor, is visible through the Defy Skyline’s sapphire case back. The case back itself also appears nicely finished, with smooth satin brushing and deeply engraved text. The case back is secured via four hex-head screws, helping give the watch 100 meters of water resistance. But as you see in the picture, the Defy Skyline also has a quick-change bracelet system. A push of two buttons releases the bracelet, allowing the wearer to swap it for the included rubber strap. 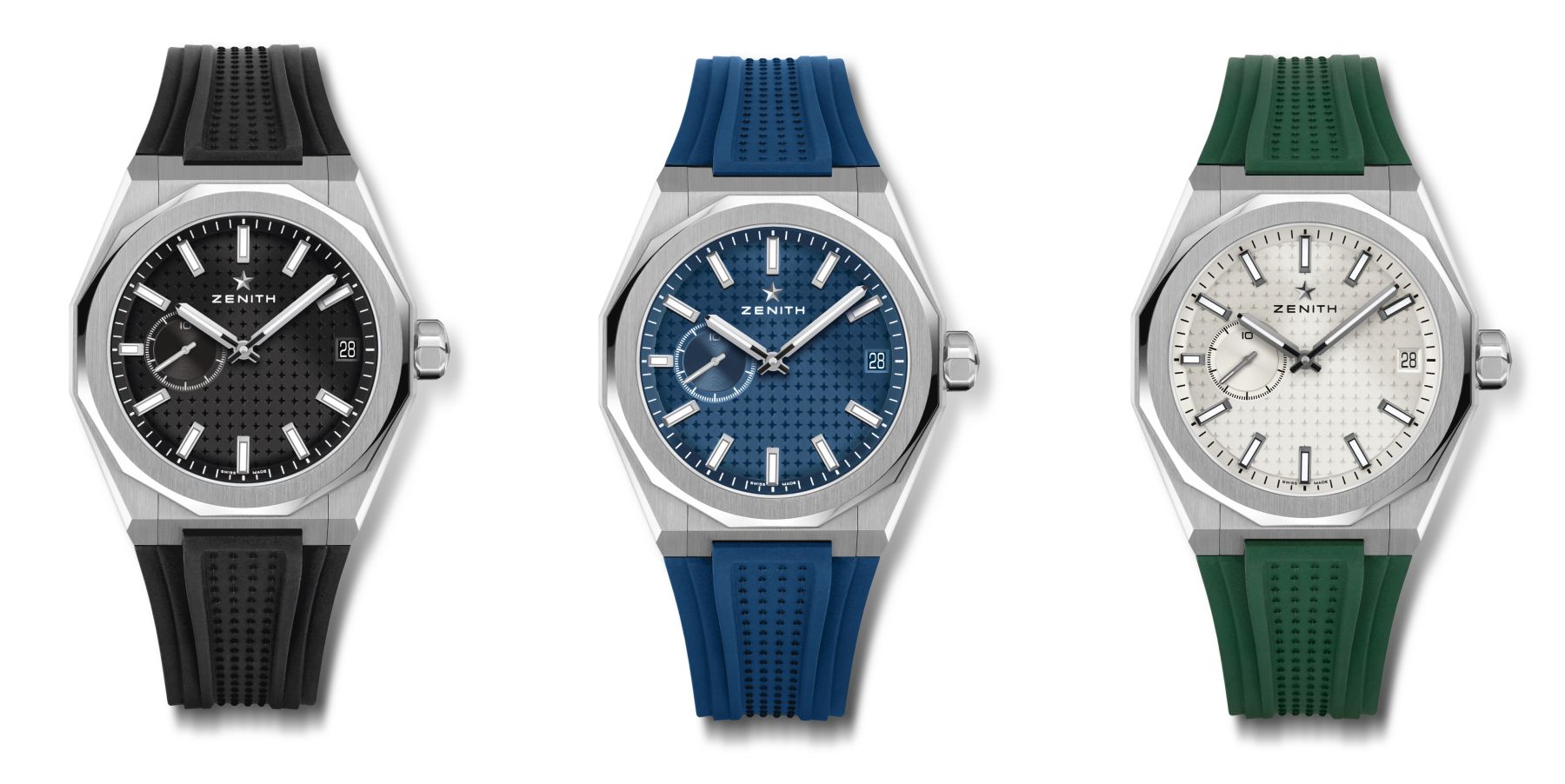 The included rubber strap mirrors the dial’s motif, with four-pointed stars running down the center. The rubber strap also comes with a steel folding clasp, and from my experience, Zenith’s deployant clasps are superb. The Defy Skyline comes in three sunburst colors — basic black, blissful blue, and a simply serene silver. The black and blue variants come with matching rubber straps, while the silver pairs well with a contrasting khaki green. 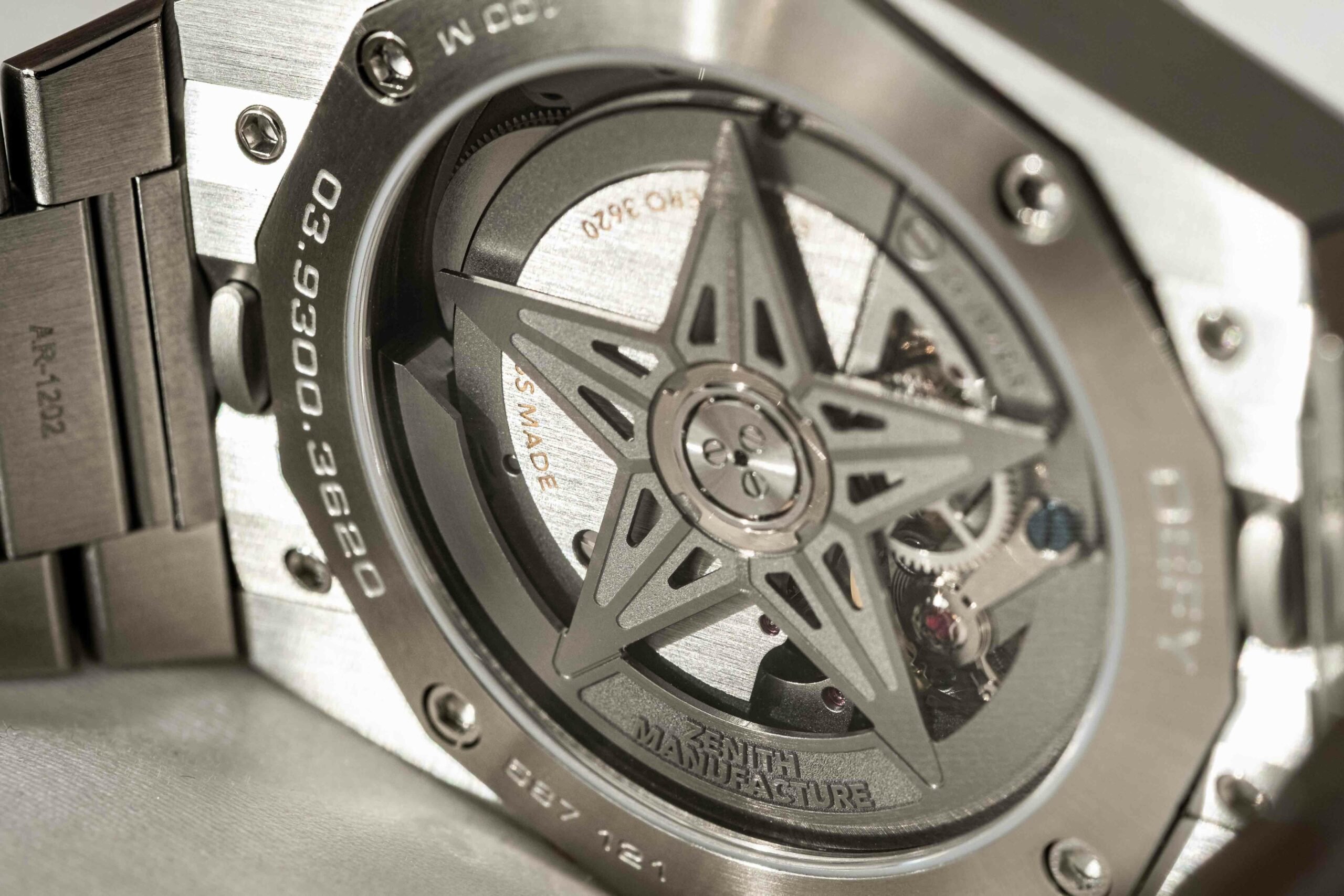 Unlike the Defy Revival and just like the Defy Classic, the new Defy Skyline is a standard-production model. It will be available through Zenith’s online boutique, as well as at physical Zenith dealers worldwide. The retail price is €8,300 or $8,400 in the US. For the price in other currencies and more information, make sure to head on over to the Zenith website.

Will the “Null Primero” catch on this time around?

As I mentioned earlier, the movement in the Defy Skyline is based on the El Primero 3600. Not only that, the new 3620 caliber is an official member of the El Primero movement family. But to many, the thought of an El Primero movement that is not a chronograph just seems kind of strange. Is the El Primero defined by its high frequency, its chronograph function, or, necessarily, both? It’s an interesting question, and it’s one that Zenith first posed to the market back in 2012. The Zenith Espada, what I call the “Null Primero”, was the brand’s first foray into a non-chronograph El Primero. And although there are certainly some fans of the watch, overall, it was not a huge commercial success. Many people simply couldn’t understand the concept. “An El Primero that’s not a chronograph? Blasphemy, I say!” To read more about this story, check out my article here. 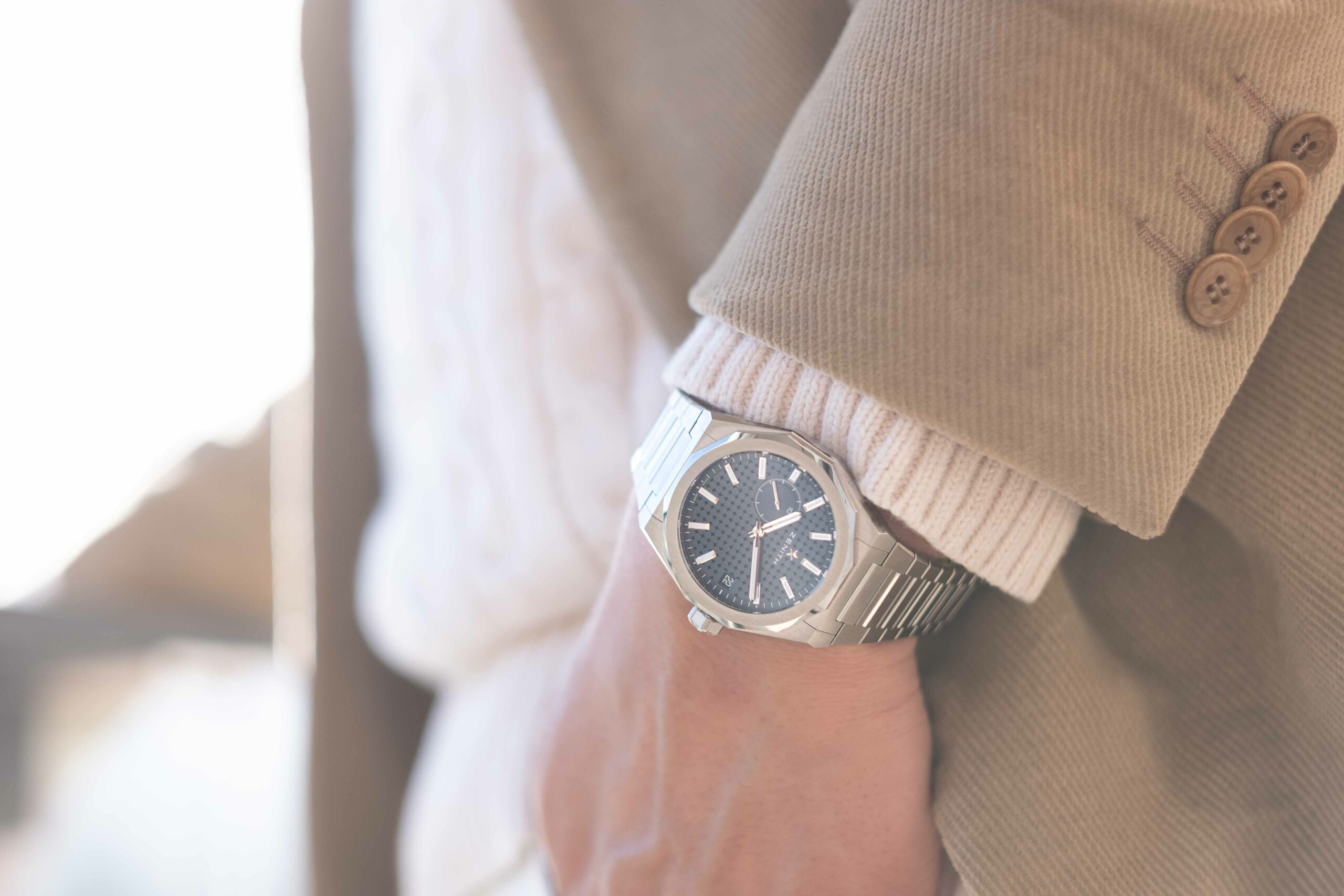 But with the Defy Skyline, I think Zenith has a chance of finally making the “Null Primero” the winner it could be. The Defy Classic has proven to be a huge fan favorite, and in my opinion, the Skyline just takes it to the next level. I think Zenith executed the design tastefully, and the running 10-second counter is a unique visual treat. I can’t think of any watch that has that same feature (if you can, though, please do let me know what it is). But although the design and the movement are fantastic, the key to success may lie in the model name itself. Unlike the Espada and its short-lived successor, the Synopsis, the Defy Skyline doesn’t say “El Primero” on the dial. As such, I think owners of this watch will look at it and not feel one bit slighted that it’s not a chronograph. Yes, that may seem like a trivial hang-up, but to some, it can make all the difference in the world. 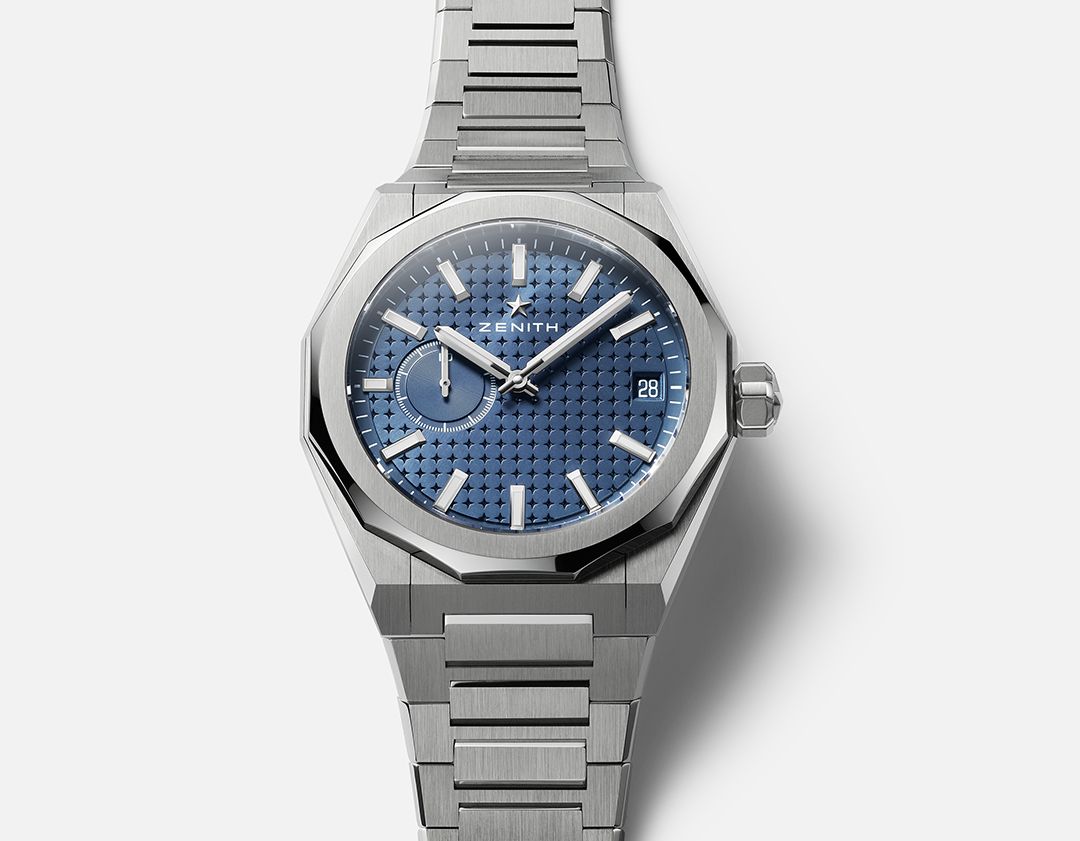 Has it got legs?

As always, we want to read your thoughts in the comments. Do you think the new Defy Skyline has what it takes to make the “Null Primero” concept finally catch on? At $8,400 for US buyers, the Defy Skyline costs $1,000 more than the Defy Classic. The price difference in Europe is a little bit more, to the tune of €1,200. Do you think the upgraded look and movement are worth it? I absolutely do, but let me know what you think!

Read more of our coverage on Zenith here, and check out the brand’s offerings on its official website here. Enjoy your week, everyone, and enjoy the new releases!

*All non-stock photos courtesy of Mickael.