Hands-On: The Raketa Copernicus Limited Edition — A Planetarium On The Wrist

Raketa has been around since 1961, when it was launched to celebrate the first-ever manned space flight of Yuri Gagarin. Since then the brand has kept its eyes on the stars. Yet none of its timepieces reflects this passion for the cosmos quite like the Copernicus. The model is named after Nicolaus Copernicus, a Renaissance astronomer and polymath, famous for creating the first model of the universe with the Sun, instead of Earth, at its center. First launched in the 1980s, the Copernicus pays tribute to the Polish astronomer’s discovery in a rather unique way. This special edition model gives a beautifully executed makeover to the current production model.

Raketa’s design team has never been afraid to experiment. Unique hand shapes, submarine steel bezels, 24-hour dials, funky case shapes, and watches that run backward — they do it all. We have covered a number of these unique watches from the brand’s current lineup, and they never cease to amaze us. Watches like the Avant-Garde 0279, the Raketa Polar, the stone-dialed Big Zero Malevich, the Russian Code, and the Leopard 24 to name a few. In fact, looking back, this will be the first Copernicus that we cover. As with each of the brand’s unique designs, the Copernicus tells a story, employing a clever bit of design and a lucky ratio. 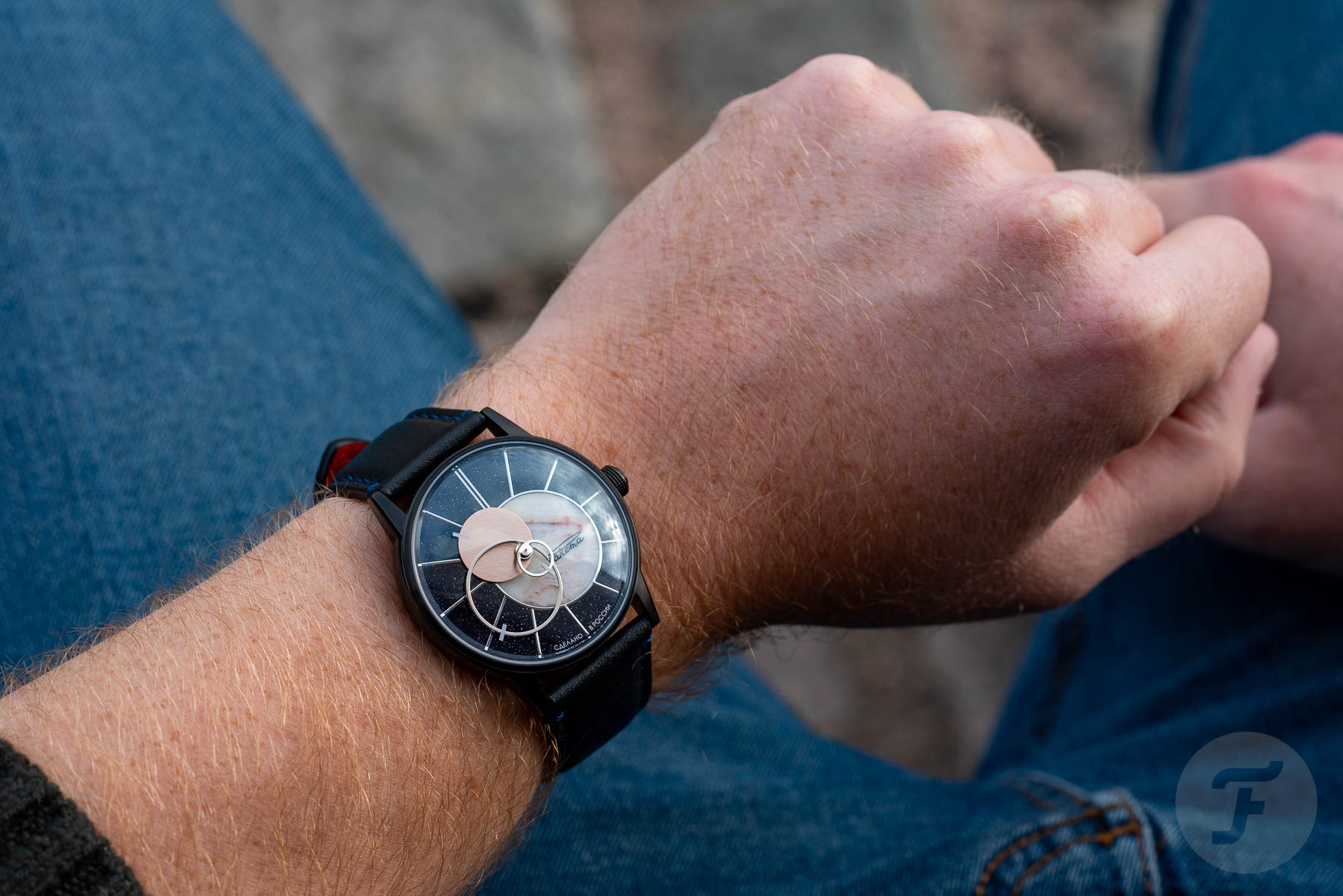 This original Soviet design indicates time using three planets, or hands shaped like planets. The larger silver ring, which serves as the watch’s minute hand represents the Earth. The smaller hour hand, a brushed coppery gold color disk, stands for Jupiter. On the aventurine stone dial, a circle made of agate represents the Sun. So, how does the ratio work? Well, the Earth orbits the sun once per year, and Jupiter does so every 12. This translates perfectly into the watch, as the minutes hand (the Earth) circles the dial once every hour, and the hour hand (Jupiter) circles the dial once every 12 hours. Pretty clever stuff! 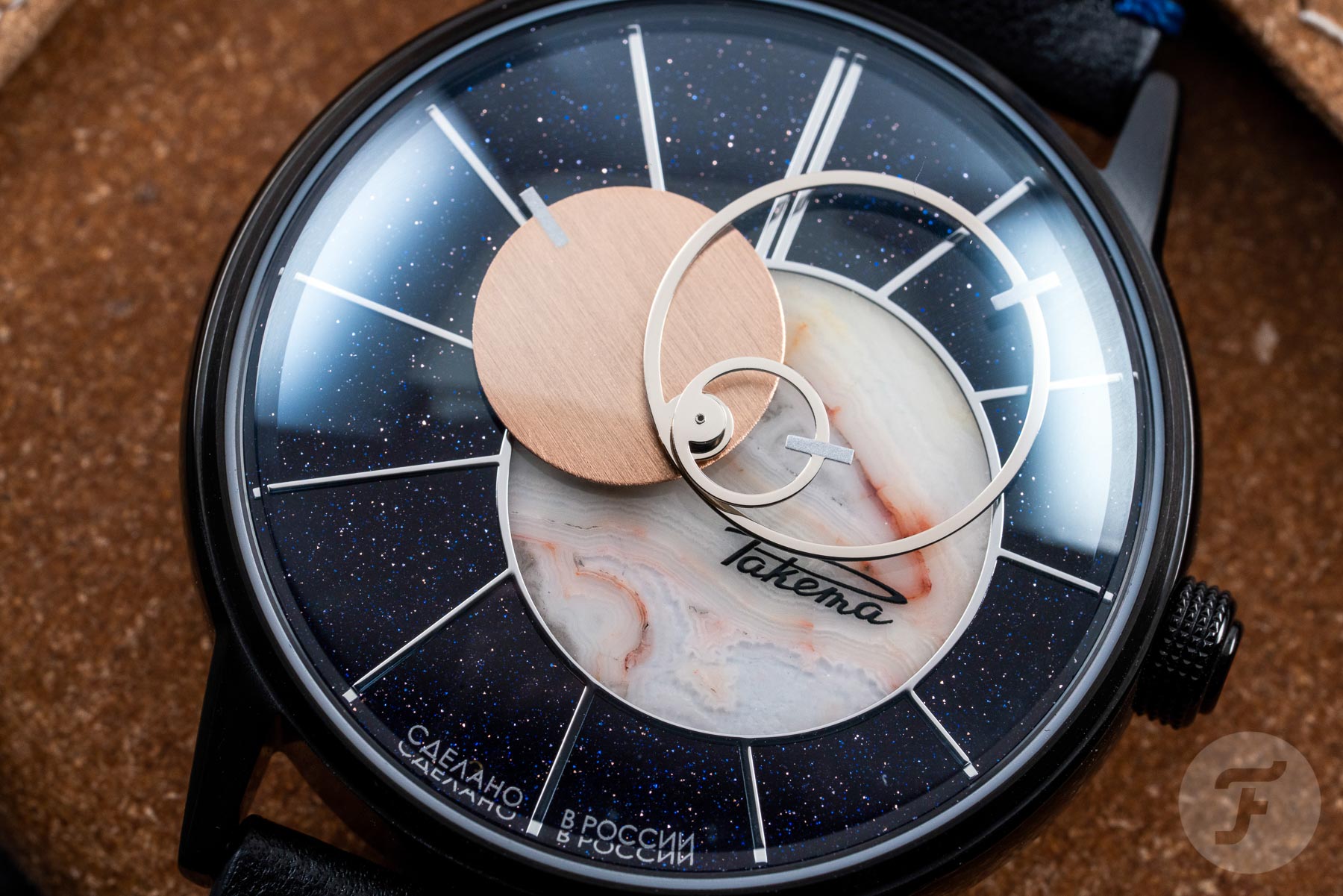 As I mentioned in the title, this model is indeed a limited edition production, and as such it has a number of key differences when compared to the standard production Copernicus. The case shape and design layout are the same, but that’s where the similarities end. The limited-edition model’s dial is made of natural stone. Deep blue sparkling aventurine for the dial, representing a starry outer space. And a warm yellow agate circle stands for the sun. The patterns and texture of the natural material mean that each dial will be unique. On the Sun’s surface, we find a glossy black printed Raketa logo. Silver hour markers extend from the round agate Sun to the dial’s outer edges, like silvery sunbeams. Due to the Sun being off-center, these vary in length, with a double market at the 12 o’clock position. 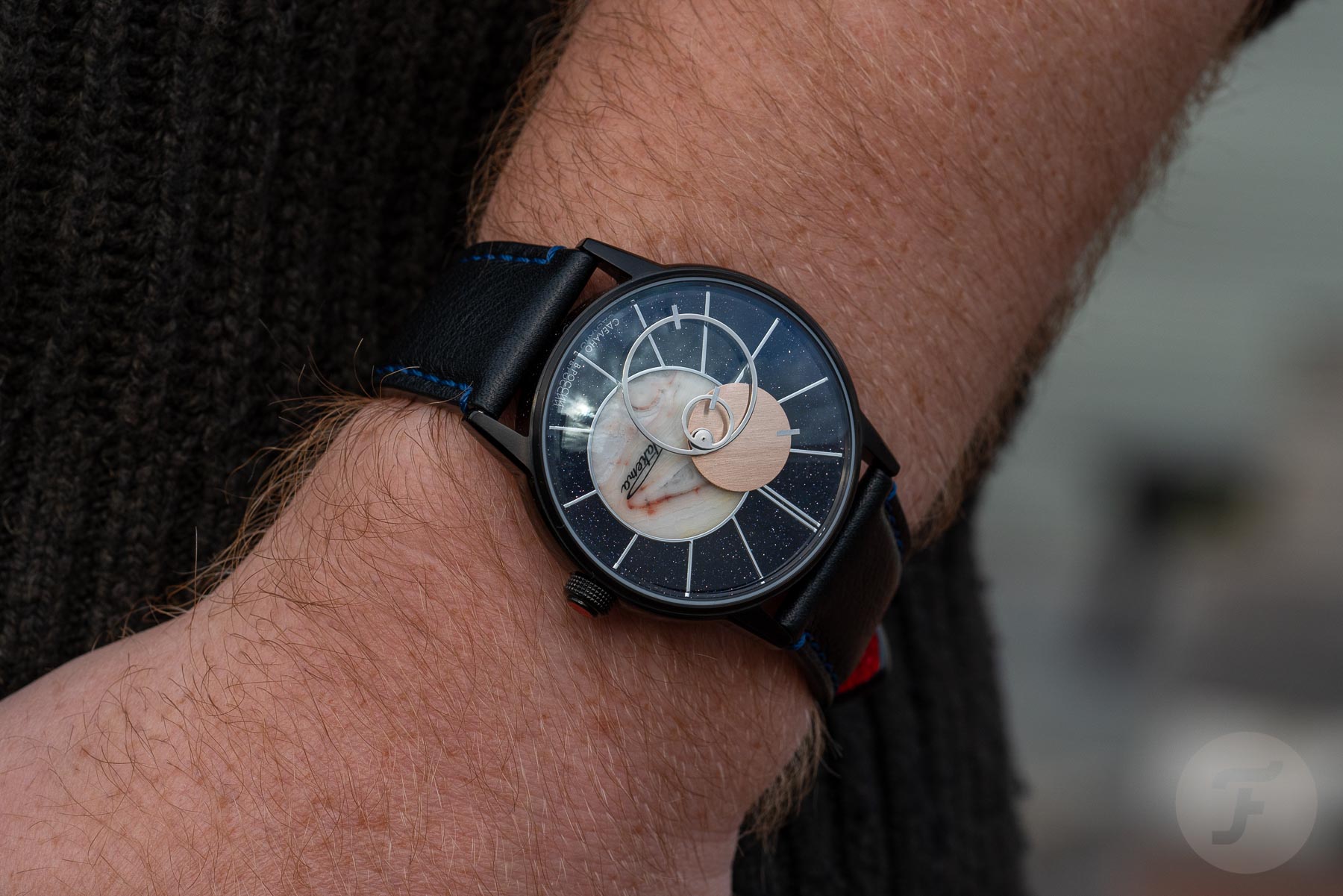 The dial’s layout combined with the unique hand shapes makes for a rather dynamic time display. Each circular hand is given a silvery-white pointer, which intersects the circle opposite its attachment point to the pinion. In this special model, the seconds hand, which is normally a more standard red-painted stick hand with a small round lollypop counterpoise. In the regular production model, the pointers are also painted red, and the dial has a deep blue color. The Sun circle has an off-white color. Overall, the LE model improves upon all of these features, and elevates the look of the watch, adding depth to it. Especially with the night-sky aventurine sparkling away in the light.

A planetarium on the wrist

Obviously, this is a watch where the dial will be the center of attention. It moves and shines unlike anything else out there. This didn’t stop Raketa from adding plenty more to this model. The 40,5mm black PVD coated steel case features a satin finish on the tops of the lugs, as well as the thin bezel around the incredibly domed sapphire crystal. The sides and back of the case have a polished finish, with the exception of the backs of the lugs, which have a subtle radial brushing to them. A thin bezel around the mineral glass window in the case back also has a satin finish. This contains text indicating the fact that this watch is one of 300, limited edition, made in Russia, and the reference of the Raketa movement inside. 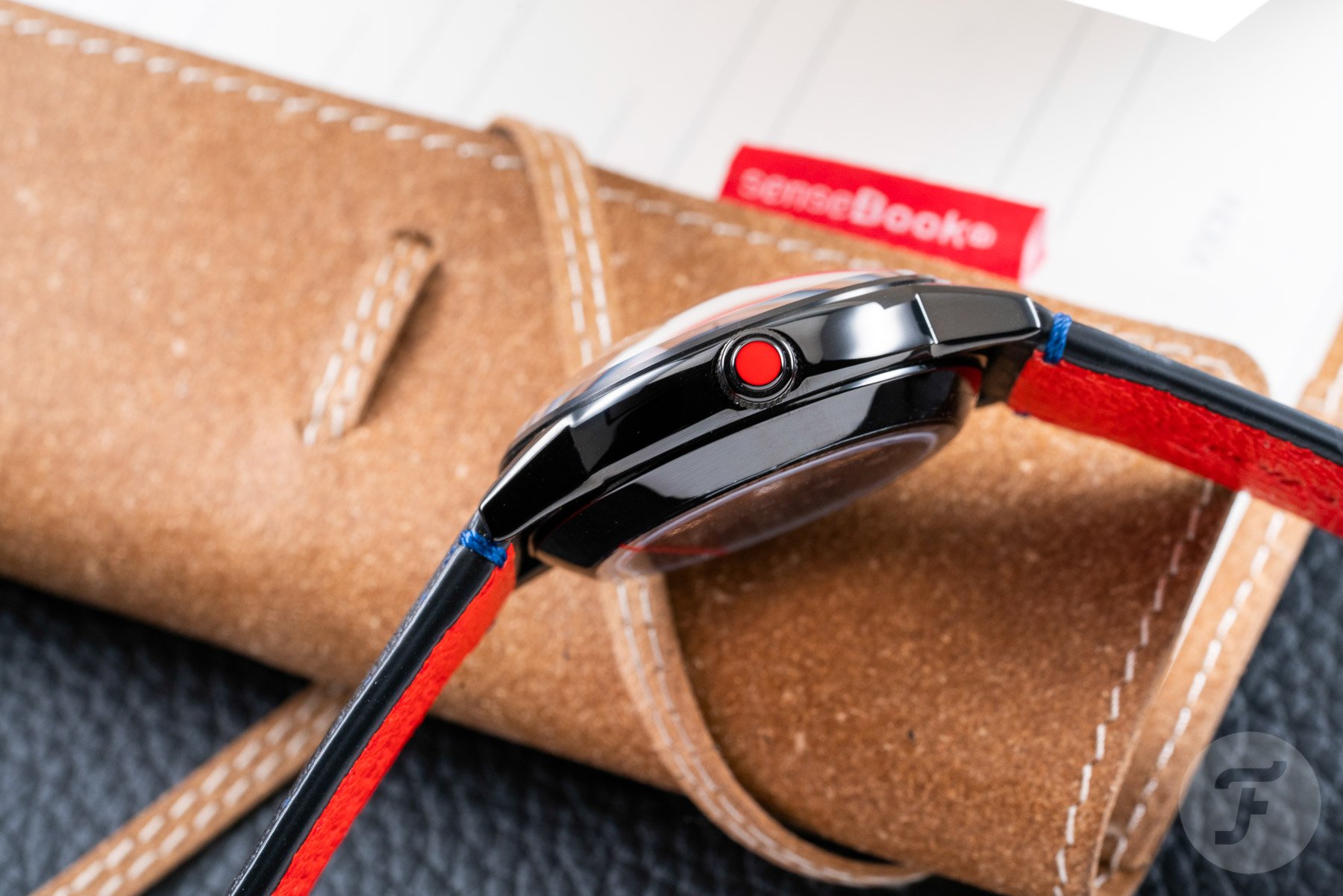 The matching black crown is decorated with a red dot, which nicely matches the inner lining of the 22mm black grained calf leather strap. Dark blue stitching matches the dark blue of the aventurine on the dial, and a signed black PVD buckle finishes off the rather comfortable strap. Personally, I find the red backing on the strap to be a really cool touch. There’s something extremely satisfying about a rather sober black and blue strap with a bright red lining hidden underneath. If there was only one thing I could change it would be the strap and lug width. For a watch of these dimensions, I feel that a 20mm lug/strap width would have better complimented the watch. However, it’s a small detail. I feel like a black PVD mesh strap would also look killer on this watch. 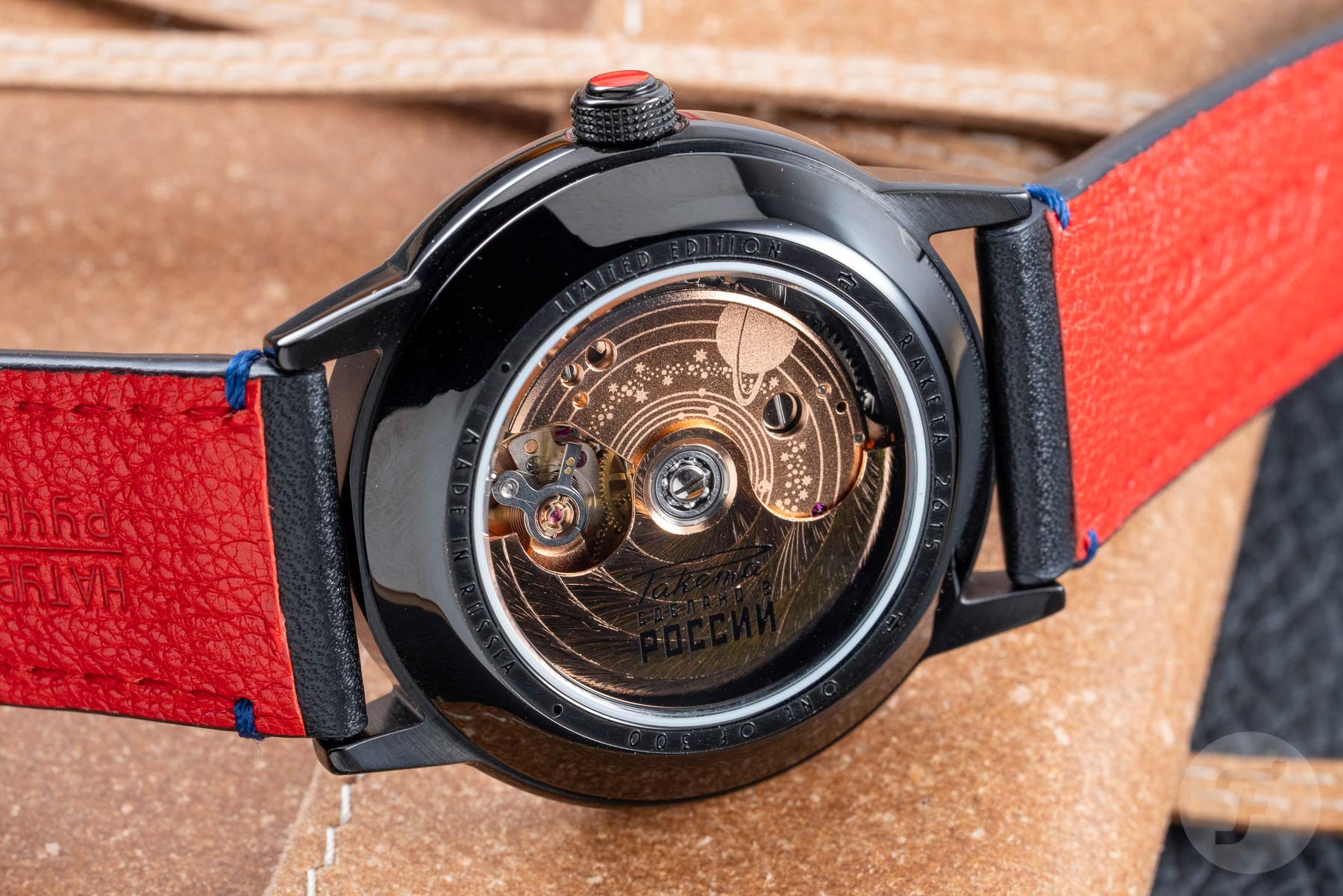 Russian watchmaking at its finest

You might have noticed my very deliberate mention of the movement followed by no information whatsoever. I assure you that this was not a lapse in journalistic professionalism, but a calculated omission. The automatic in-house Raketa caliber 2615 used in the Copernicus deserves its own section of the article. What’s so special about it? Well, believe it or not, but it’s the finishing. The major elements of the movement including the base plate, balance cock, and rotor are gold plated. This gives the movement a warm coppery tone. Additionally, the movement features a rather lovely engraving of the solar system. It includes a number of planes and their orbits, as well as a belt of stars. The rotor is hand engraved with Neva waves and features the Raketa logo printed in black.

Unlike the regular production model, which has a small round mineral glass window through which the balance is visible. The movement here is fully exposed through a mineral crystal back. In combination with the push-in crown, this gives the watch a water resistance of 50 meters. If it’s good enough for the Moonwatch, it will do for the Copernicus. When it comes to technical details, the movement delivers so what you might expect from a modern mechanical caliber. It runs at 18,000 Vph, which means service intervals will be slightly longer too at the cost of some accuracy in the long term. However, even that isn’t bad, as it’s rated to an average of -10/+20 seconds per day (tested to four positions), and performed rather well on our timegrapher. Finally, the movement can be hand-wound but doesn’t hack, and it has a 40-hour power reserve. 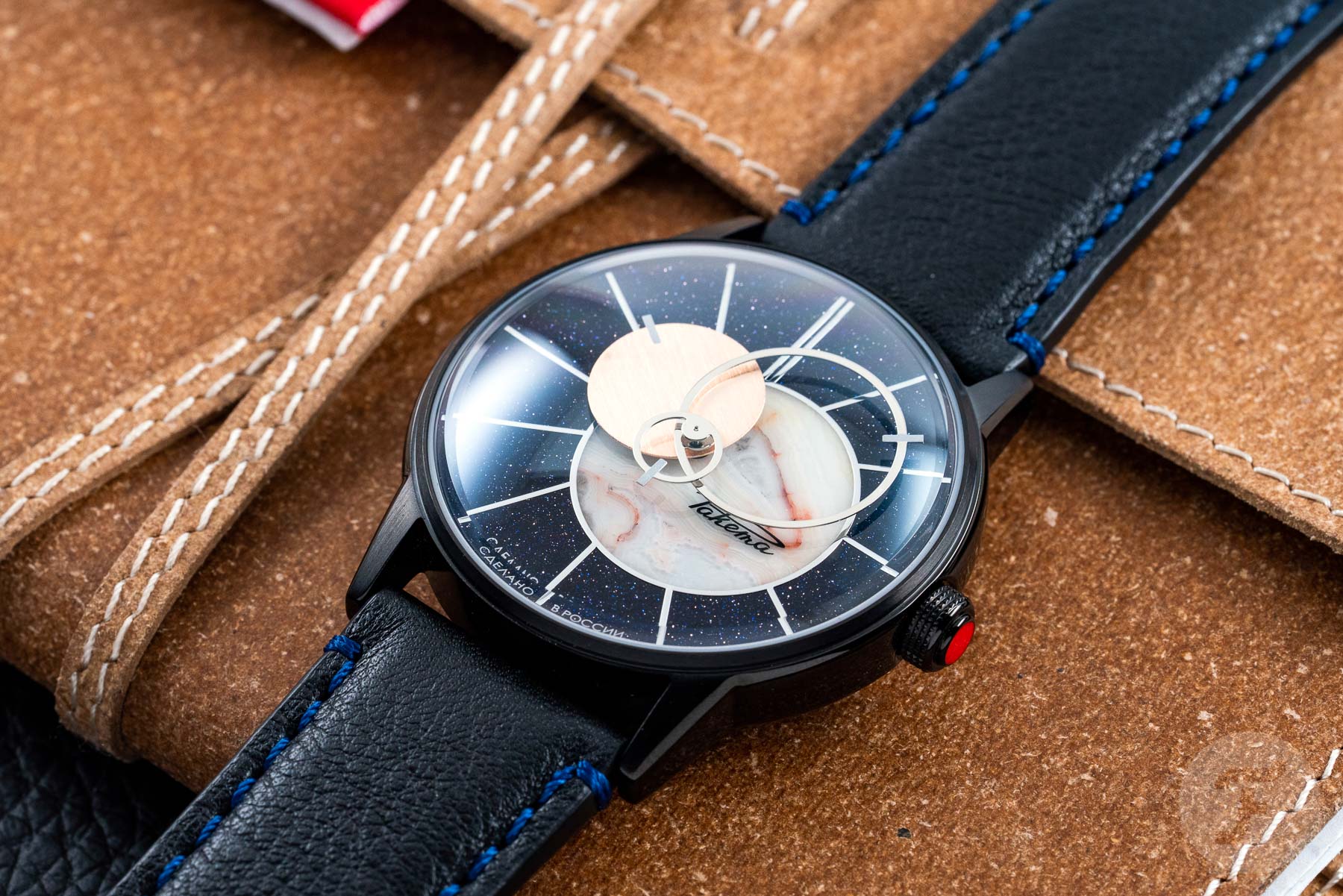 In a rather unexpected turn of events, I have found myself becoming a big fan of the Copernicus and Raketa as a brand. As a fan of vintage watches, I had always had the brand’s older offerings on my radar, including the Big Zero, a black and white 24-hour GMT watch, and of course, the Copernicus. Seeing these models reinvented and modernized, all in the same factory where these older models came from. Keeping in mind that this is a limited edition release, with a unique design, an in-house movement, and great craftsmanship, the €1,290 price tag is more than reasonable. The brand’s catalog is full of interesting unique models. If you find yourself wanting to take a breath of fresh watchmaking air, do yourself the favor and head over to the Raketa website here.

Hot Topics
Introducing: The Omega Speedmaster Super Racing With Spirate System
165 comments
Design Vs. Specs — Which Is More Important To You When Buying A Watch?
86 comments
My Predictions For New Omega Speedmasters In 2023
54 comments
The Time To Buy Is Now: How The Current Economic Climate Influences Watch Buying And How You Should React
51 comments
A Regret-Free Guide To Buying Your First Luxury Watch — Part Three: Higher-End Options From Omega, Rolex, Grand Seiko, And More
48 comments
Popular
Rolex GMT-Master History And Overview Of All Major References
Robert-Jan Broer
21
The Ultimate Sports Rolex – The Explorer II Reference 1655
Robert-Jan Broer
17
Why Are There No Stainless Steel Rolex Watches Available?
Robert-Jan Broer
121