A few weeks ago I introduced you to our Collector’s Corner feature, where I interviewed RJ Kama, a collector of watches and big on Omega pieces. Although Collector’s Corner is not limited to our weekly Speedy Tuesday topics, I got in touch with one of our readers, Erik D. from the USA, about his interesting collection of Omega Speedmaster watches (and others). One of his Speedmaster watches has an incredible interesting story to it, to which I will get later on.

Erik is originally from France, in the Marseille area, and moved to the USA in 2000. Before I start the interview with Erik on the phone, he sent me an overview of his collection. There are definitely a couple of pieces in there of which I am dying to know why he bought them and especially I want to learn more about his Speedmaster 105.003 which has as an interesting engraving on the caseback.

FW: Before we talk about your Speedmaster watches, how did you get into watches in the first place?

Erik: My parents were not into watches, so my first watch was a Swatch in the 1980s. In my early 20’s I bought some watches (not Omega) and I inherited a gold chronograph from my grandfather. It says “Fanal Watches” on the dial and it was my first vintage watch. I don’t know much about it, but I have been told that the name on the dial probably refers to the retailer where the watch was bought. It is a very thin gold chronograph, two registers, and I only wear it once in a while. I even don’t think of it as ‘a vintage watch’ but more as my grandfather’s watch. It is the one that never leaves the collection. 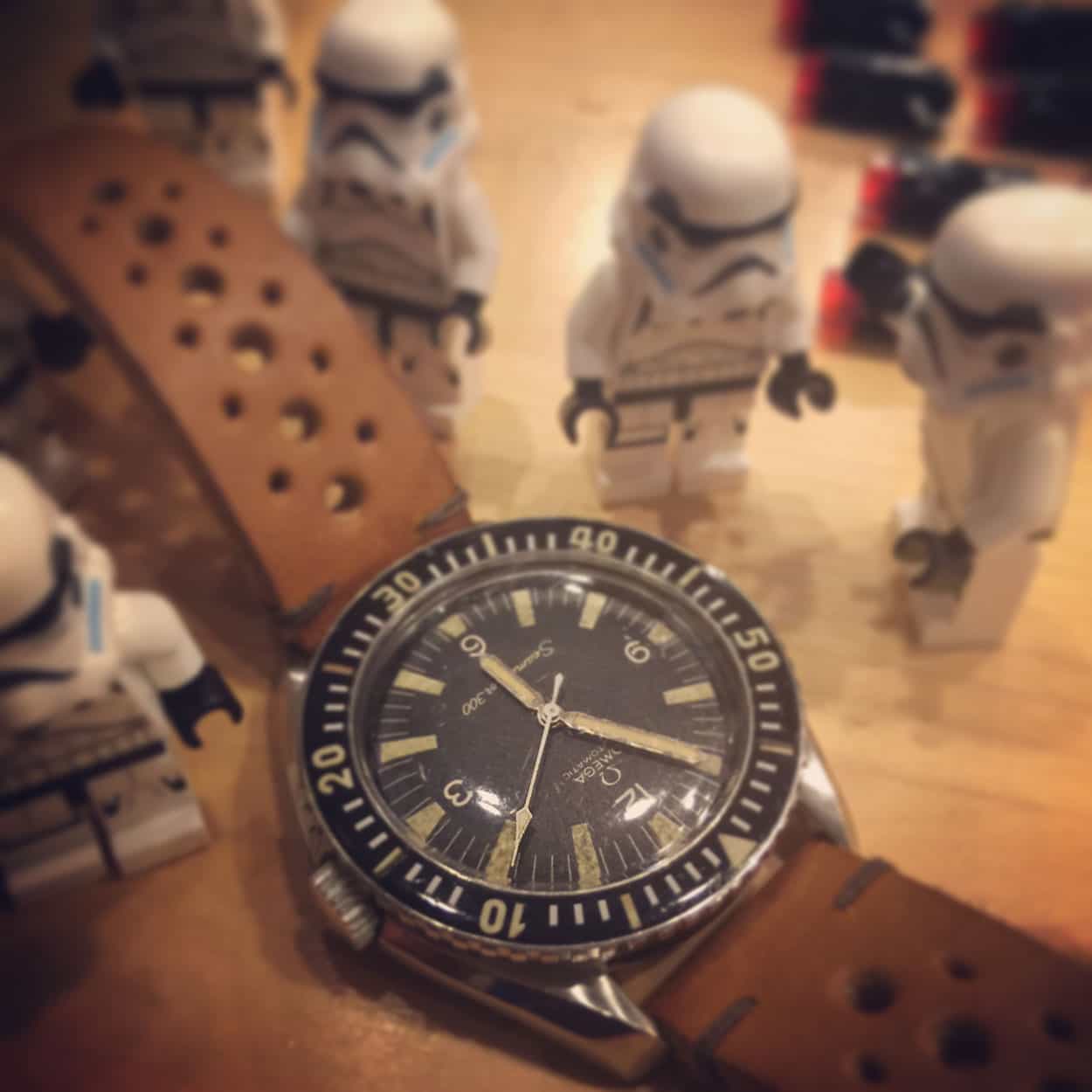 The first Omega I bought was a vintage one though, a Seamaster 300 from 1964. I went to this vintage watch shop in Aix de Provence (France) and ended up talking to the store owner. He showed me this Seamaster 300 in great condition, with original stainless steel bracelet and all authentic. No replacement parts or parts that belong to a later period of time. The thing is, with these Seamaster 300 watches, most of them are pretty much abused by their owners at the time, as they were just toolwatches. I guess most of them ended up in the bin after they were fully worn out. A pitty and it is quite difficult to find one in good condition. Actually, it surprises me a bit that they are so much undervalued compared to a Speedmaster from the same period. It is a lot easier to find a decent Speedmaster from that period than a Seamaster 300, yet these Speedmasters carry a much higher price tag.

Later on, I bought more Seamaster watches, like the PloProf 600 (Type 2), the Seamaster 1000 and so on. Incredibly interesting watches and the thing with Omega is, that they have a watch for every budget out there. You can buy a nice vintage Omega for 600USD but you can go up to 40-50K USD for a rare Speedmaster if you want. The friendly priced Omega watches also allow me to have a diverse collection of watches, which I like. You can probably have 10 cool Omega watches instead of having 4 Rolex pieces that all look a bit similar.

FW: So, what lead you to your first Speedmaster watch?

Erik: Well, I was browsing on forums like WatchUseek, and noticed this Speedmaster Professional Sapphire Sandwich (ref. 3573.50) that I liked. To be honest, I didn’t put a lot of effort in it to learn more about the Speedmaster, but I just liked that watch and still do. It has the sapphire crystals, it is wearable, looks crisp and will stay as it is forever as it has no Hesalite crystal. Perhaps if I would have known then what I know now, I perhaps would have made a different choice. Something vintage I guess. I bought this Sapphire Sandwich version in 2013 and from then on I went a bit crazy on the Speedmasters.

FW: That’s it. Then it starts to get crazy, as there are so many different models and variations to choose from.

Erik: Yes, that’s the dilemma in Speedmasters. If you take a look at Omega’s Journey Through Time book, there are so many models, you realize you can’t own them all, even if you just focus on Speedmasters. A lot of them would also be very much the same. Sometimes only a tiny detail will indicate it is a different model. The Speedmasters in my collection are showing a bit of diversity, they are all relatively different from each other.

FW: So let’s run by some interesting ones you put on the list. Tell me about the Alaska (we covered it here: Alaska – limited edition of 1970 pieces).

Erik: The Alaska I bought off via eBay while I was visiting my parents in France, in July last year, but I rarely wore it, perhaps once a month. My motto is: if I don’t wear it, sell it. I loved the Alaska with its white dial and nice white Velcro strap, but it is not for me. I traded it (plus cash) for this 105.003. 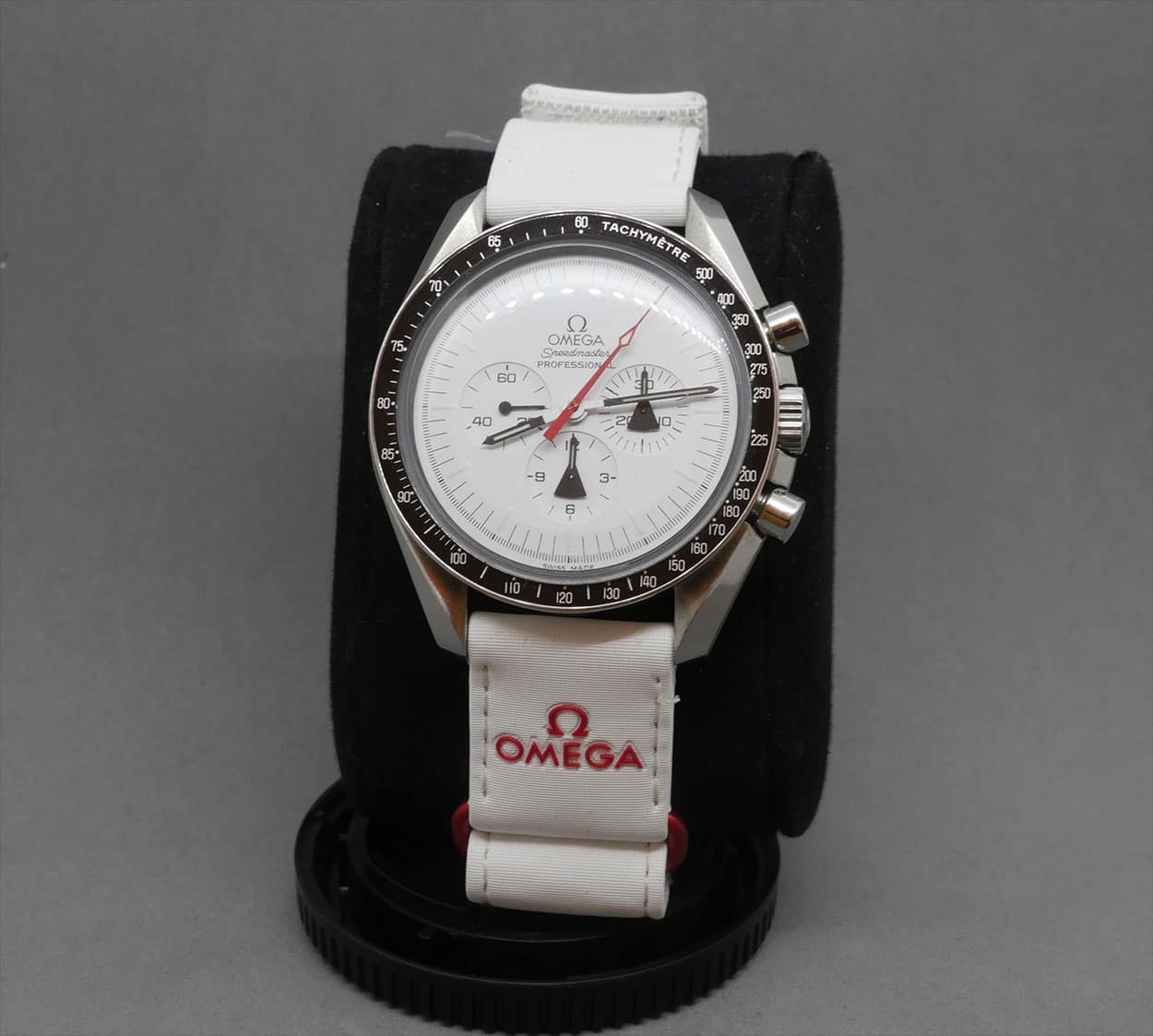 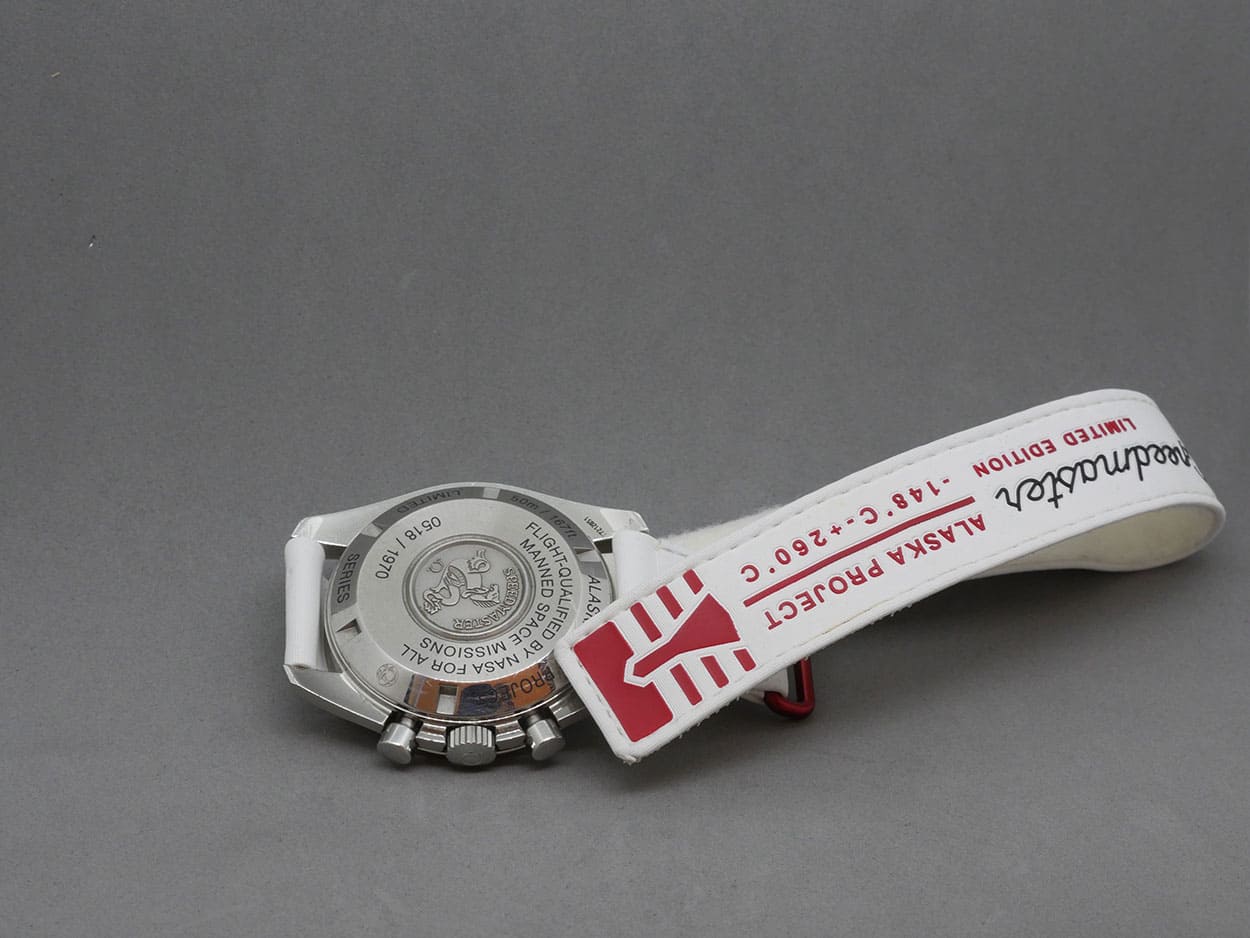 FW: Yes, I noticed you put an interesting comment on your 105.003 in the overview you sent me. It has NASA history?

Erik: The 105.003 is a watch that is all authentic. The name of the original owner has been engraved on the caseback. I did some research and it seemed to be a guy (“Tom Miller”) that worked as an engineer for NASA in the late 1960’s and was a Colonel in the Air Force. Not only he was an engineer, he had worked on the landing gear of the lunar module (called ‘Snoopy’) of the Apollo X (RJ: A bit of coverage here as well, in the signed caseback project article). I contacted the son of this guy and he didn’t know much about the watch. His father worked for NASA until they laid off a lot of engineers when the Apollo missions were finished in the 1970s. He passed away in 2012. 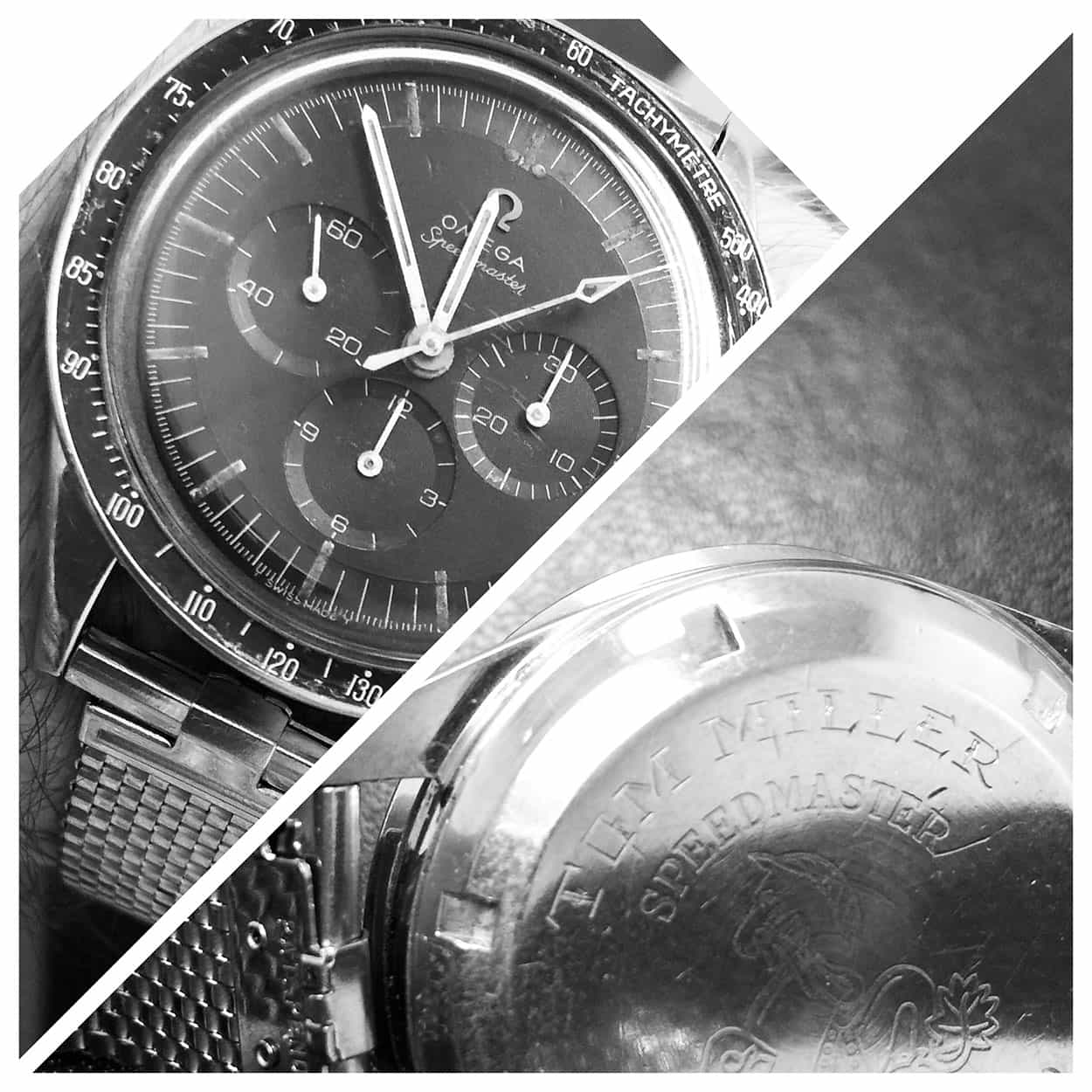 It is not an official NASA watch in that respect, that Omega didn’t issue it to NASA. According to the archives, this 105.003 was originally bought in Germany. Perhaps when this Tom Miller still worked as an Air Force colonel stationed in Germany or something. So although the story isn’t complete, it does make an interesting story about this watch. 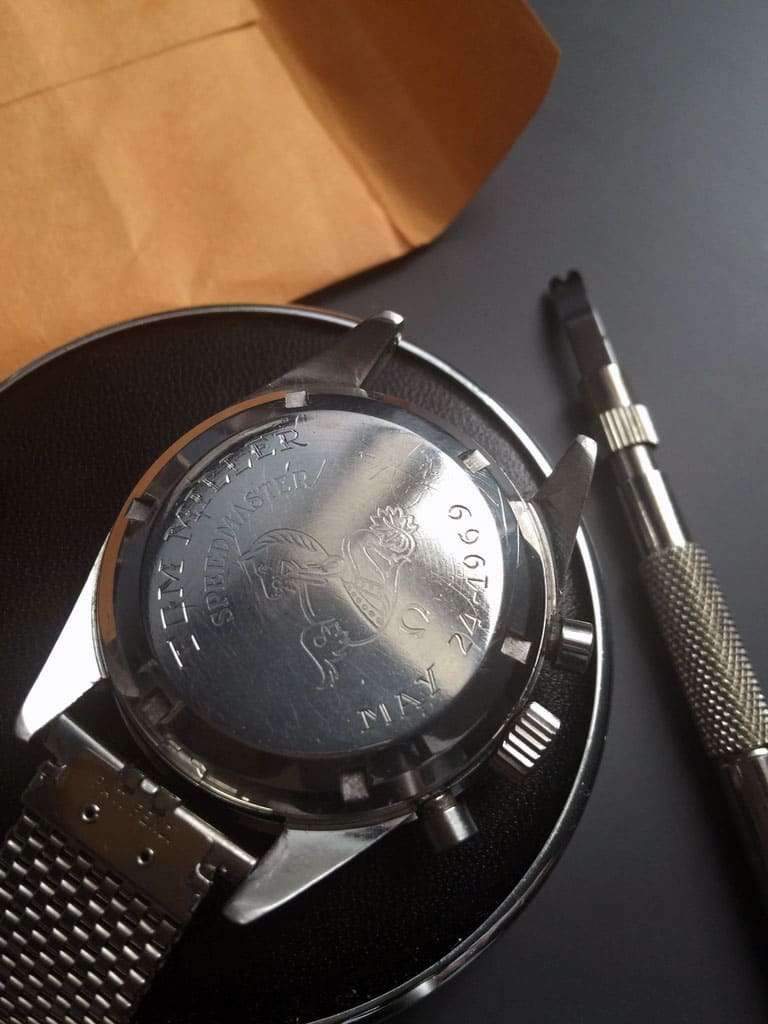 The watch came without a bracelet but I was lucky to find an unused JB Champion bracelet for this watch, exactly the same reference the astronauts used as well. 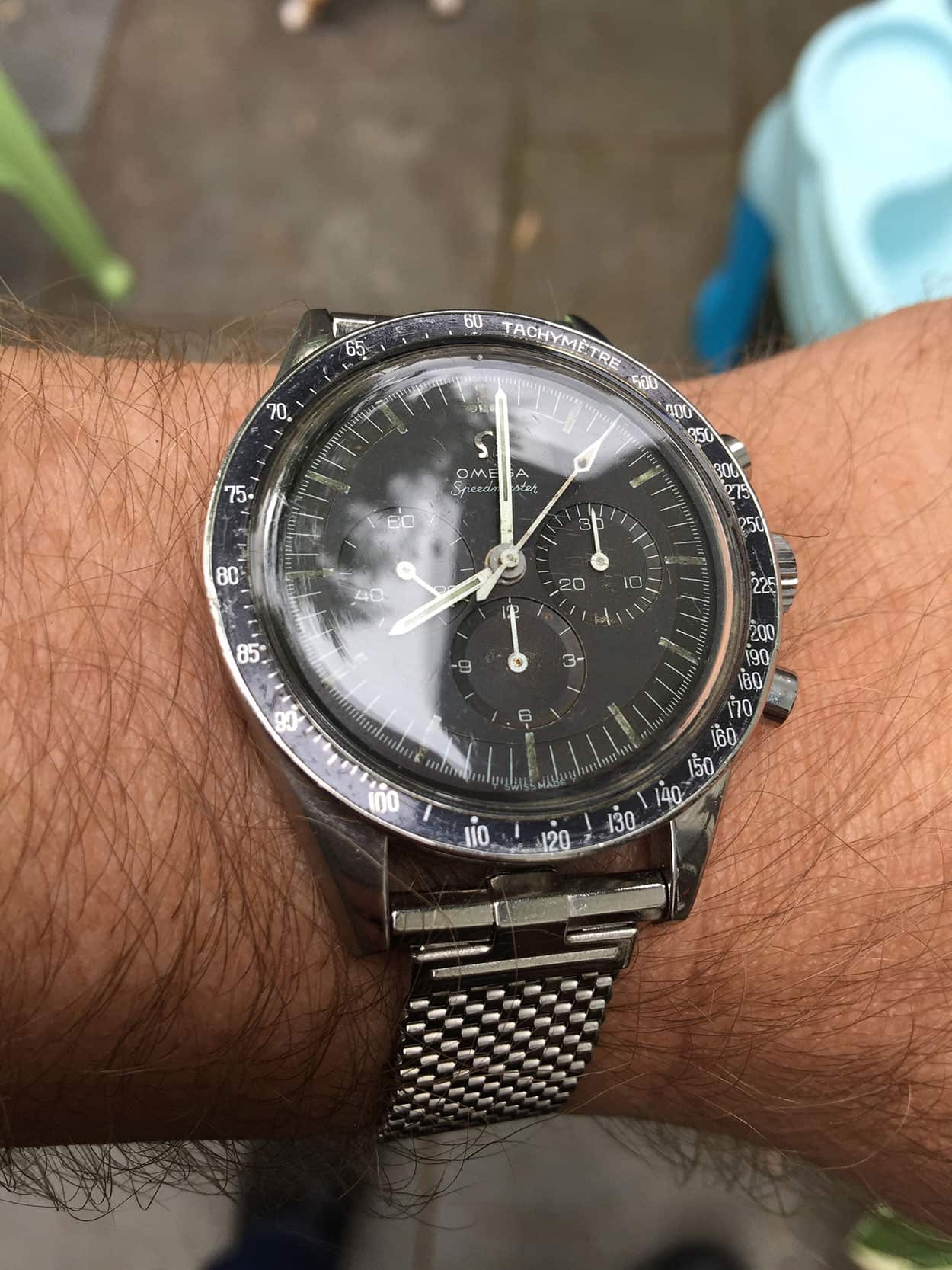 FW: An incredible story and it would be interesting if anyone knows more about this person or specific watch. I noticed you also have a number of other Speedmasters in your list, like two Speedmaster Mark II models.

Erik: I like a bit of diversity, but managed to buy two of these. One with the regular black dial (which I personally like better) and one with the racing dial. The particular thing about this racing dial is, that the hands are yellow where they should be orange. They aren’t discolored by age or replaced, but really yellow. I’ve been told by an Omega technician that there were a couple of these meant for the Japanese market in those days. I don’t know if it is true, but that’s what I have been told and I love the yellow hands. At first I bought the black dial model and from the same guy, I was able to buy the racing dial version as well a bit later on. I thought it was nice to have them both. 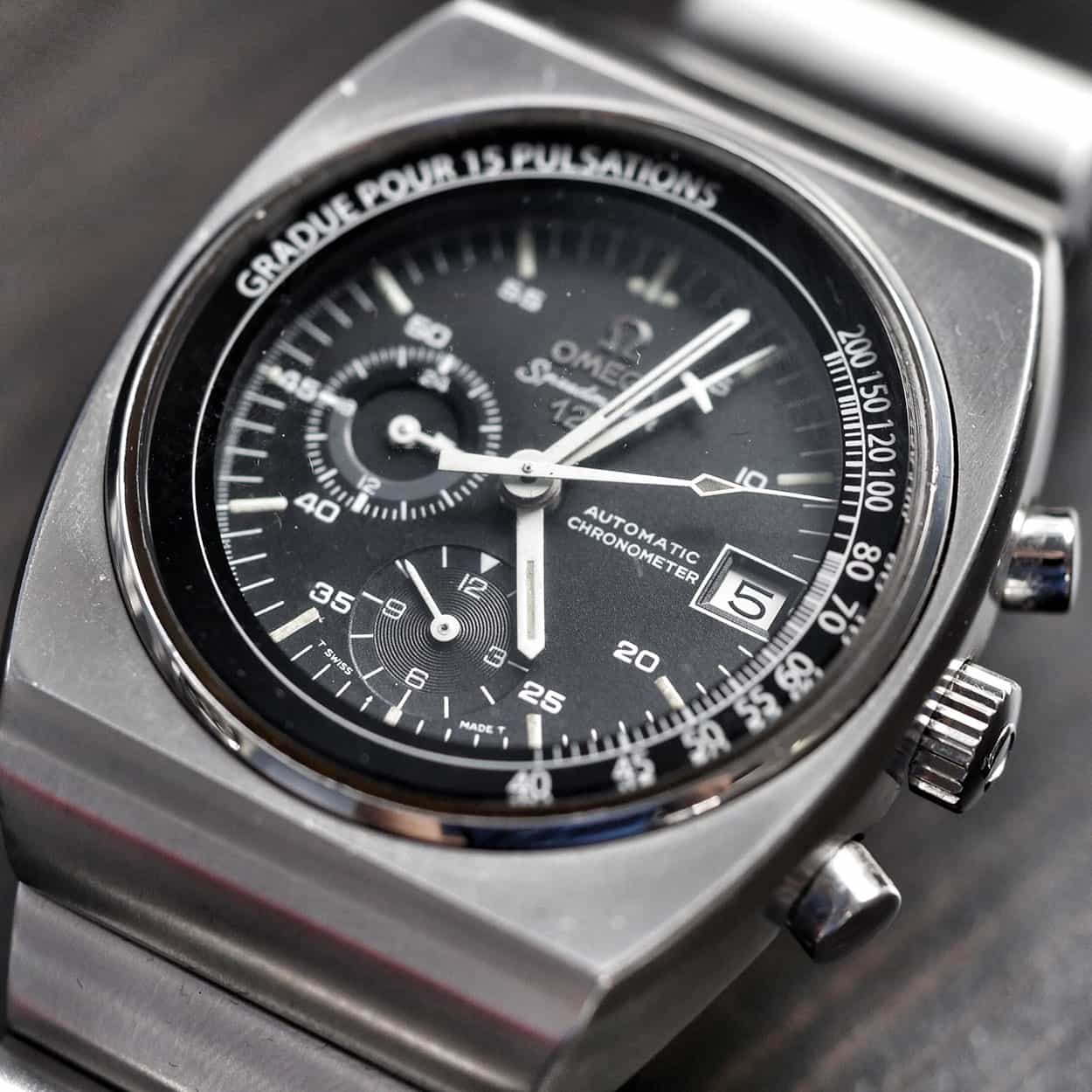 I love these 1970s models and think they are so cool, even today. That’s also why I have this Speedmaster 125. It is a neat looking piece with a typical 1970s design. I actually bought that Speedmaster 125 as it matches my year of birth, 1973. It was also the first automatic chronograph chronometer, ever. And if I am not mistaken, the first limited edition Speedmaster (RJ: That might be very right, as the gold 1969 Speedmaster Pro was numbered, but not per se limited to 1014 when they started production). Only 2000 pieces were made.

FW: So what would be your next Speedmaster, if any?

FW: Great choice, I fear that these are on the rise though, so you better move quickly if you want a nice one. So we talked a lot about vintage Omega and your collection – except for the 45th Anniversary Apollo XI edition Speedmaster Pro – mainly consists of vintage Omega watches. What do you think about the current Omega watches?

Erik: Well, let’s start with the positive. I really like their Speedmaster Mark II re-edition. Omega did a great job on those and although you can debate about a date window and so on, it is a great looking watch. It looks unique and it’s nicely done. I love the polished and brushed facets. The PloProf 1200 is really cool I think (I am wearing the PloProf 600 as we speak) and also the new Seamaster Bullhead is very cool. However, this goes for the PloProf and the Bullhead: these are great re-editions, but they can’t win – for me – from the original vintage ones. 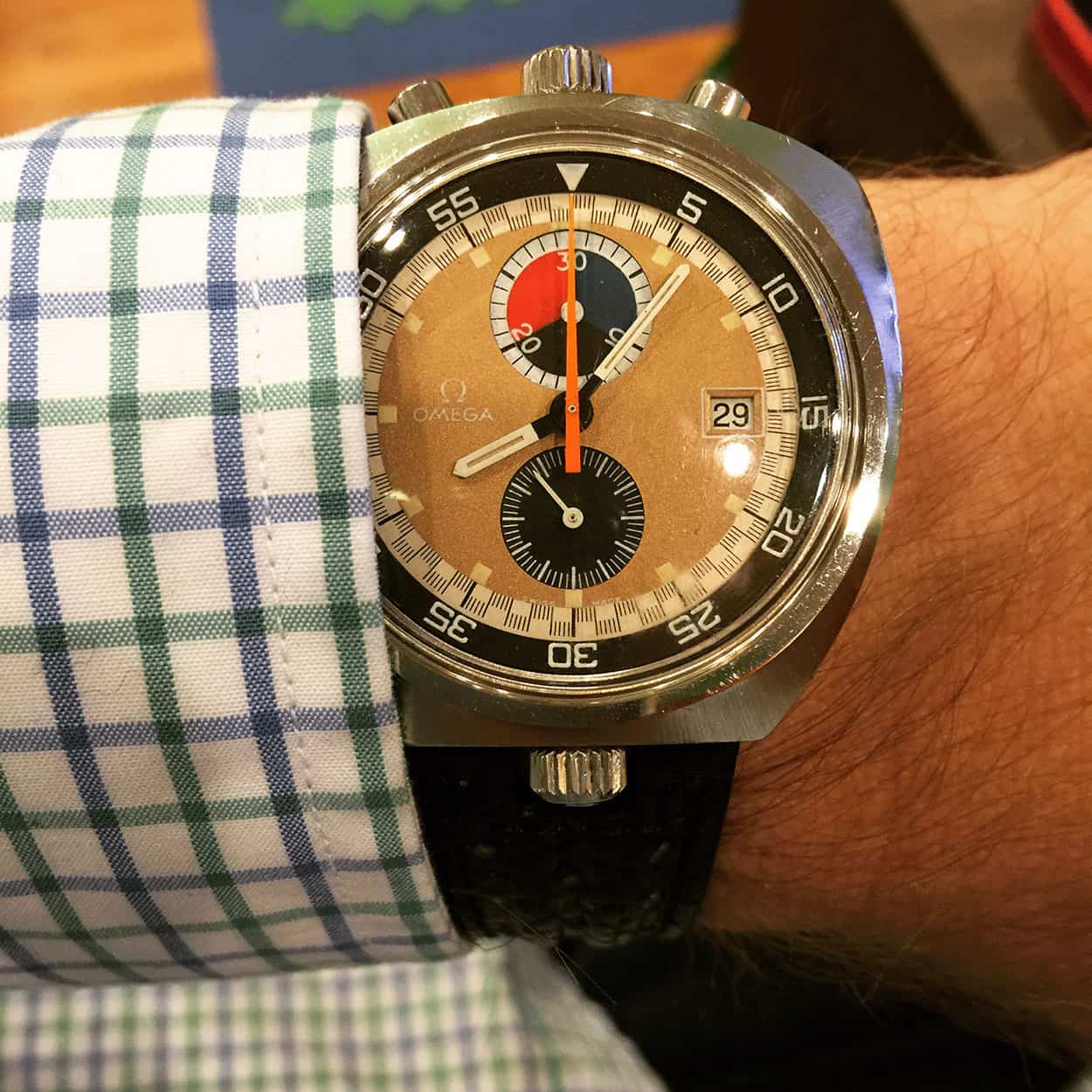 With regards to the ceramic Co-Axial Speedmasters and the Seamaster 300 for example: That’s hard for me. Although similar in look and feel, to me they are not the real deal. I prefer always the original vintage models. Actually, the ceramic Speedmaster Sedna Black pissed me off a bit. I am the owner of this Speedmaster Pro Apollo XI 45th Anniversary edition in titanium with Sedna gold bezel and I feel that they should have kept it with that. The Sedna bezel should have been kept unique to that piece. These watches are now too similar in appearance.

The other day I tried the Seamaster 300, the new one, in one of the boutiques here. I don’t mind the faux patina (although I think JLC did it a bit better on their Deepsea), but the watch felt a bit small to me. Although it is 41mm, I had the idea I was trying on a really small watch.

However, I will surely buy a modern Omega at some point, but I am now waiting until they put the new movement (>15,000 gauss Master Co-Axial) in all of them. It doesn’t make sense to me to buy a new Omega without this movement.

FW: Thank you for your time!

Hot Topics
When Sneaker Heads And Time Geeks Team Up — The 11 Most Iconic Sneakers And The Watches That Go With Them
58 comments
A Californian Controversy: The Origins Of The Term “California Dial” And Why It Can Mean Two Very Different Things…
50 comments
What Zenith Is Doing Wrong With Its Pilot Line And How The Brand Could Fix It
33 comments
The Best Omega Watches Of Daniel Craig’s James Bond Era — Have Your Say!
28 comments
Why The Rolex GMT-Master II 16713 “Root Beer” Is Better Than The 126711CHNR “Cough Syrup”
26 comments
Popular
New Hamilton Intra-Matic Auto Chrono – An Introduction (with live pictures)
Balazs Ferenczi
10
Hands-On Grand Seiko SBGR311 Limited Edition Review + Overview of GS Service Costs
Robert-Jan Broer
3
You Asked Us: Nomos Orion as a dress watch?
Gerard Nijenbrinks
2