Different from the daily feed of Nautilus bling, this white gold tool watch is the one for me
Thor Svaboe
comments 13
Share

Pitching this series of stories to our Managing Editor came naturally to me, as I am contrarian by nature. I’m not saying that I feel in any way better or more worthy than rappers or rock stars. And I don’t know if I am correct or just old, but surely, social media shouldn’t dictate our taste in watches, right? This is probably a dumb rather than rhetorical question, as some influencers are rich for a reason. Consider this series, The Unusual Suspects, my attempt to shed some light on some unsung heroes hidden in plain sight. And the Patek Philippe Calatrava Pilot Travel Time ref. 7234G-001 is a perfect example of what you’ll find once you look outside of Instagram.

In my role as a watch journalist, I have three main goals. The obvious two are reviewing new releases and finding value in the pre-owned market. Another important aspect is spreading the gospel on available models which are overlooked. Why are they overlooked? In most cases, the culprit is fashion. It might be a superb, high-tech, big brute of a diver when everyone wants 38mm neo-vintage. More often than not, I want to elevate the other great and more available pieces from brands like Rolex and Patek. As much as I understood the fury of the #watchfam when Thierry Stern announced the retirement of the 5711 Nautilus, I understood Thierry’s decision too. Just as Rolex makes more than Submariners, the traditional references from the storied ateliers of Patek Philippe get overlooked. From the elegance of a Calatrava ref. 5196G-001 to a perpetual calendar ref. 5327G, they have all been overshadowed by the simple charms of the Nautilus. 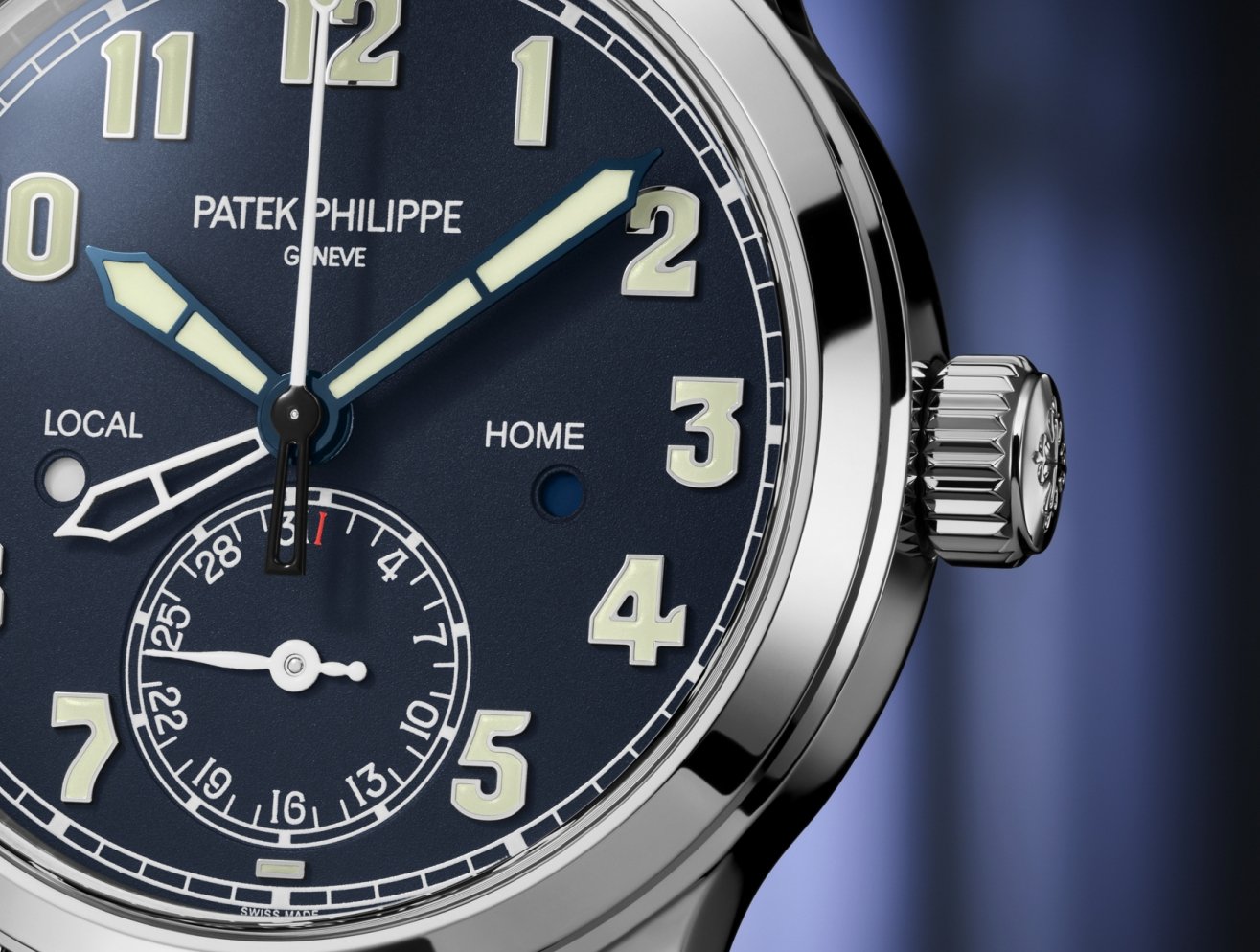 For me, the latest hypebeast Tiffany Nautilus with its matte turquoise dial was a step too far. The original 5711 is a beautiful watch with a scintillating dial. But this? I wouldn’t mind a Tiffany-stamped Nautilus, but at first look, the dial of this one seemed almost like a mod-swap. Gone were the delightful reflections in the striated dial pattern, replaced by a matte, flashy, and unavailable blue. There is a lot more in the Patek Philippe catalog that is actually available. In most cases, there is a production and order time, but you’re not looking at six years to infinity. Far from being an ugly duckling but hotly debated when released, the Patek Philippe Calatrava Pilot ref. 7234G-001 is one of my favorites. With its uneasy mix of retro cool and white gold panache, it pops out from the lineup as the contrarian’s choice. The quirky nature of this unusual Patek pilot’s watch is exactly why it gets my vote. It’s also why it’s been one of my grails since the day it came out. To be honest, I often wonder whether this was conceived and approved while the conservative Mr. Stern was on a long off-grid holiday. Should you describe it to someone who knows Patek Philippe from the ubiquitous Nautilus, you would struggle. If you read the description sans images, I’m sure you’d be very confused too. The ref. 7234G-001 is a vintage-inspired pilot’s watch à la the Zenith Pilot with large, intricate white gold numerals. But unlike its big brother, the ref. 5524G, this Calatrava Pilot Travel Time is unexpectedly small at 37.5mm. With its matte, dark blue dial and intense legibility, this is stealth-wealth functionality at its best. 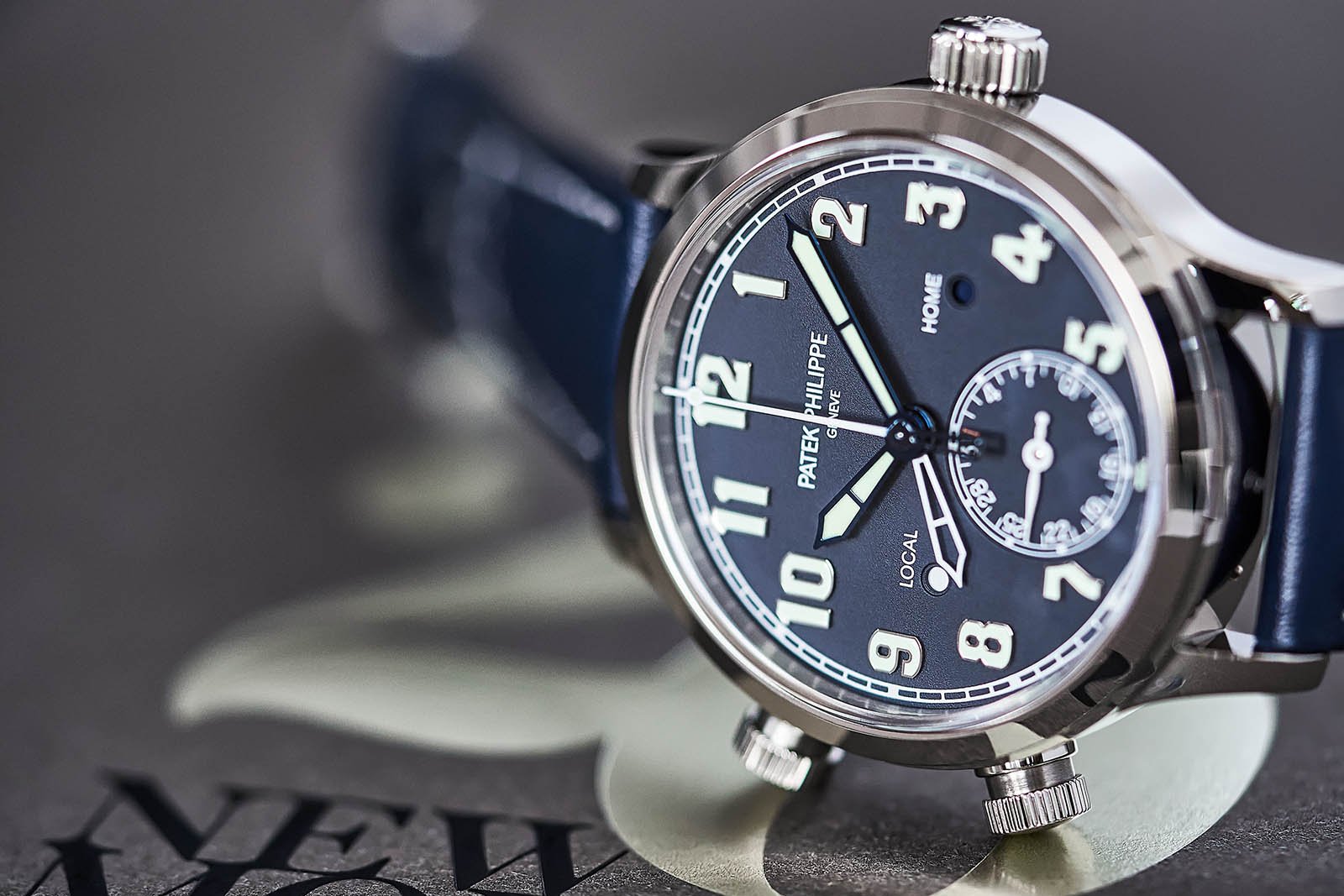 Are you fed up with reading about a small watch only to be told that it wears larger? Well, for me, 37.5mm is not small for scrawny-wrist reasons. It is a personal Goldilocks dimension, and here, it certainly wears both larger and tougher. There is a large, very “un-Patek” crown, complemented by two giant pushers on the left side of the case. It is actually a tool watch — the world must be coming to an end! Does the case seem rather lustrous? Between the lugs at 6 o’clock, you’ll find an inset diamond, signifying one thing. The functional case is not divinely polished 904L steel — this is white gold. You’re probably already confused, so I’ll save the explanation of big pushers and timezones for later. Yes, this is also an exemplary travel-time watch, as its name implies. Not many pure, vintage-styled pilot’s watches have this feature, which, when uncovering it, seems anything but out of place.

A “case” for perfection

I might have used this pun before, but here, it is entirely justified. I have the feeling that if this had been released by a medium-priced Swiss brand or even a micro, it would have sold like hotcakes. Of course, the finishing wouldn’t touch the perfection of this white gold Patek Calatrava, but still. The case is classicism incarnate with nothing new or remarkable except its flawless finish and its unique size. I can’t tell you how many times I’ve seen a more modern IWC Big Pilot or the perhaps too-quaint Zenith Pilot and wished for a small size. The case size and curved, stubby lugs make for superb comfort. I do get the legibility aspect and understand the daydream of a 43-45mm watch looking well strapped over a flight suit or leather bomber. But come on. Most of us are going to wear this without a pilot’s license or a sheepskin jacket. 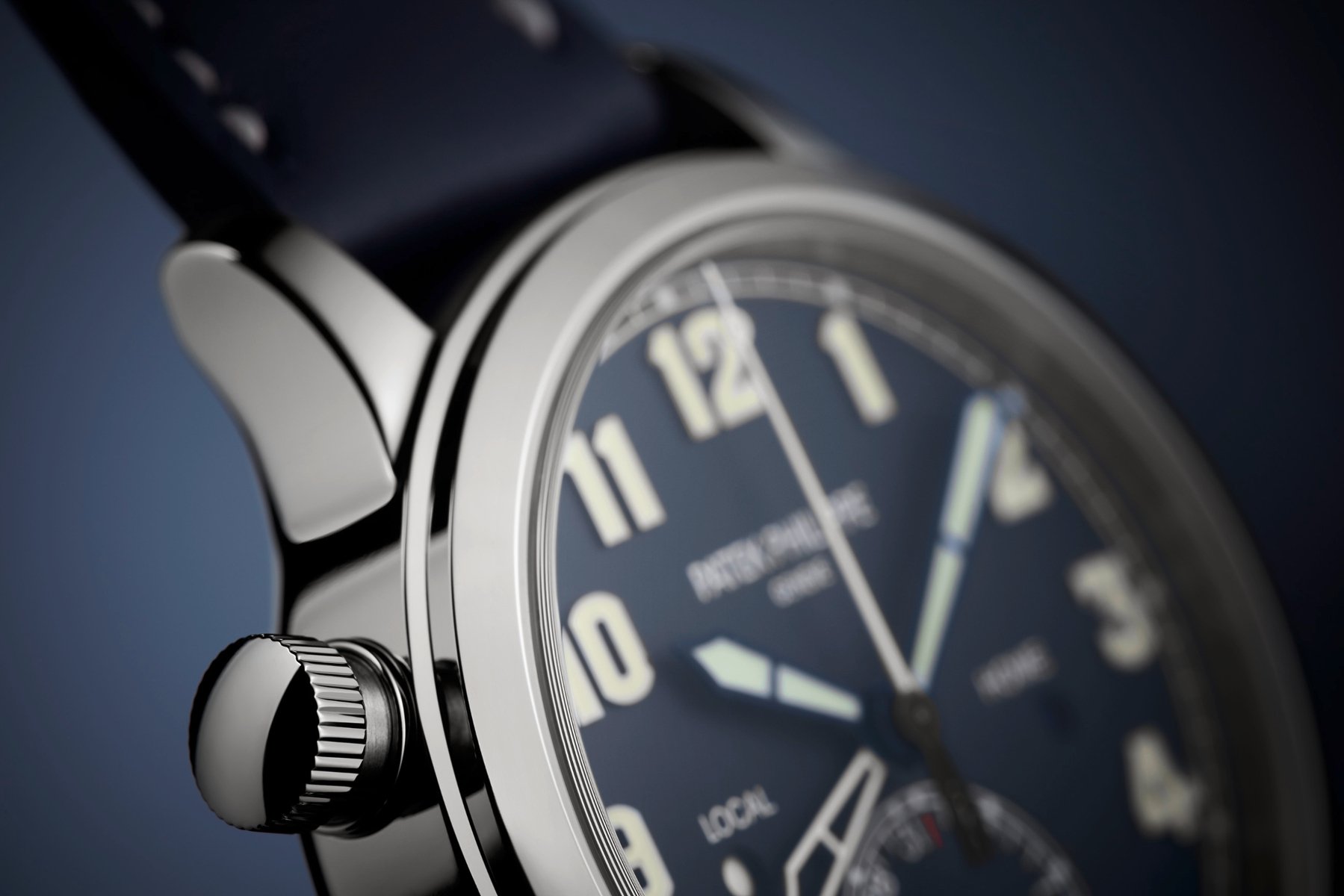 A busy dial of intuitive functionality

While the Calatrava Pilot Travel Time seems quite busy, the legibility is of textbook quality for non-cockpit-based use. I have had the pleasure of a weekend with an Aquanaut Travel Time before, and I can tell you one thing — the CH 324 S FUS automatic movement is a big win here, and highly intuitive. The big pushers that made you look for a chronograph register or two? Well, they’re here to make adjusting the blued local hour hand a breeze, clicking it backward and forward in one-hour increments. Is it excessive to let the two pushers dominate the aesthetics of the watch? Maybe. But from the first time your plane lands in another country, you’ll love the practicality. 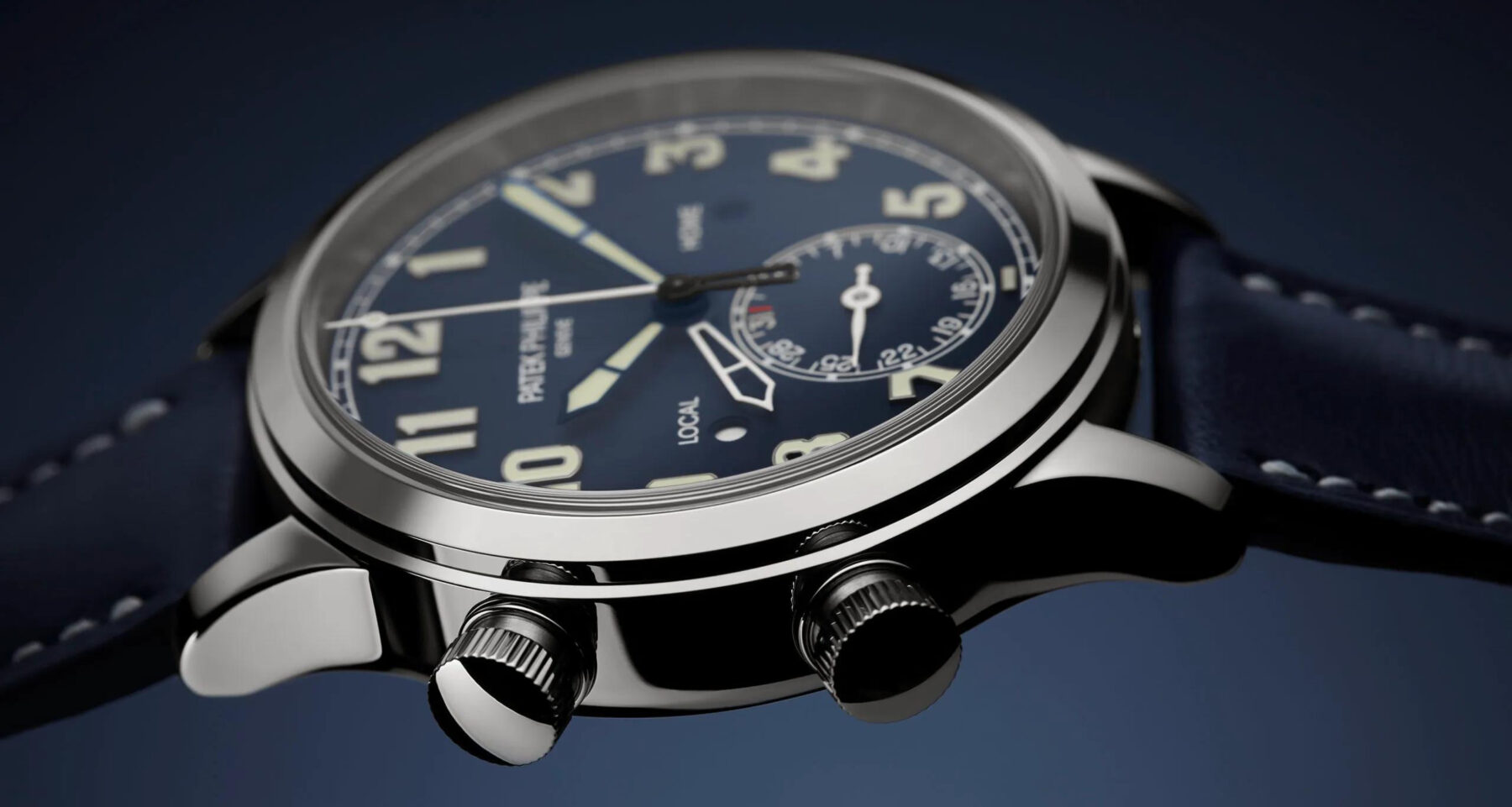 Crisp details that put the Haute in Haute Horlogerie

Obviously, this is a Patek Philippe with a considerable price tag, and that shows on the expertly finished matte dial. There is a razor-thin white gold surround on each lume-filled numeral, and the crispness of the printing is the best you’ll find. The date is as important as the hour when traveling across time zones, so the large date sub-dial at 6 o’clock is entirely justified and rather splendid. But perhaps the best detail of the CH 324 S FUS movement’s functionality is visible in the two circular apertures at 3 and 9 o’clock. In the absence of a 24-hour scale, they indicate night (blue) and day (white) for both local and home time. The caliber itself is visible through the sapphire case back, and it’s as ornate as you would expect. Perhaps this is a tool watch in functionality and a quirky dress watch in practice? 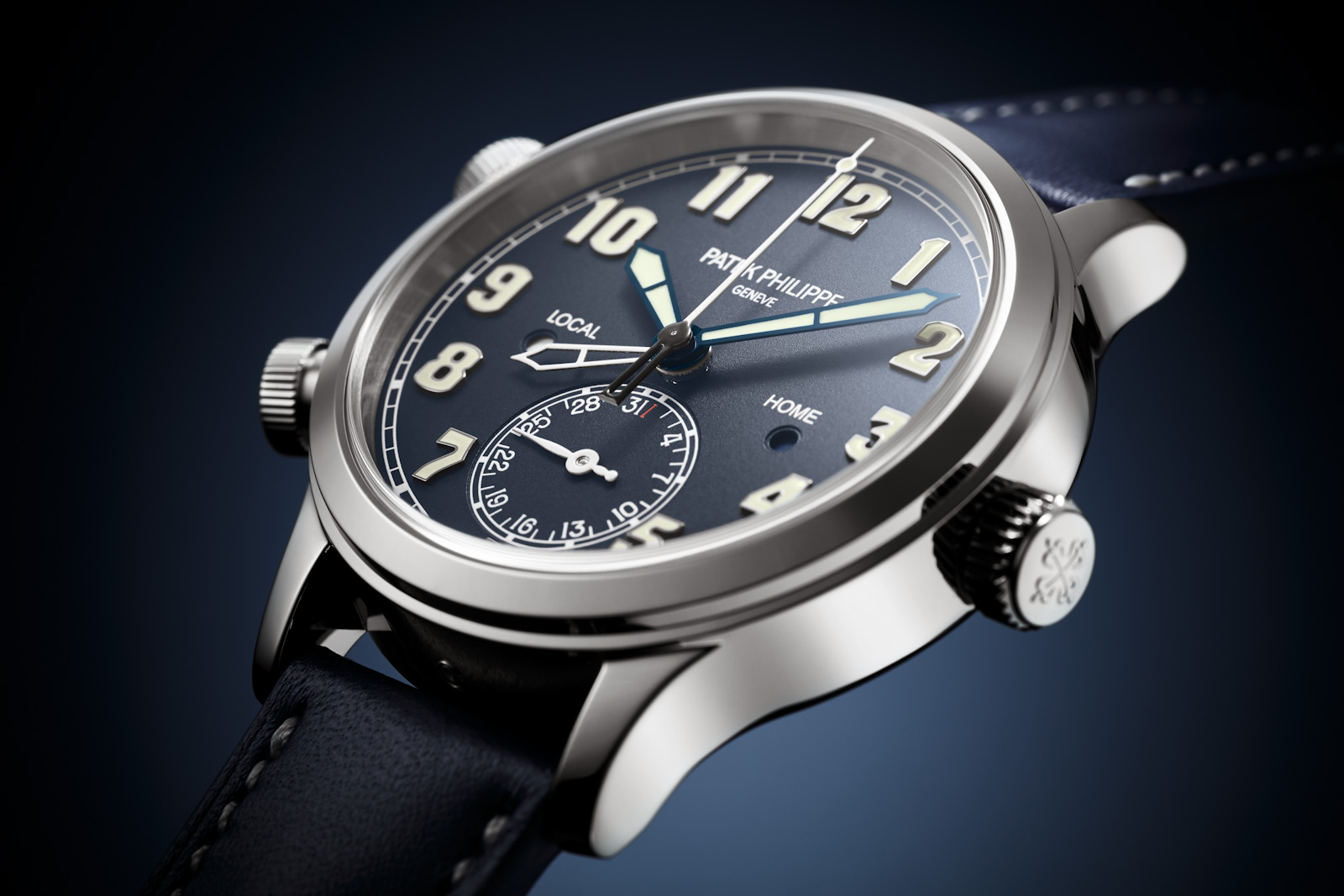 As sad as it is, one of the reasons this confuses the Instagram-saturated wealthy throng of buyers is that it’s not instantly recognizable as a Patek Philippe. But for me, the quirkiness coupled with its delightful schizophrenia as a stealth-wealth white gold tool watch makes me love it. A lot. The discreet presence of its 37.5mm case, intuitive functionality, and readability makes it a superb piece of precious-metal engineering. That Patek chose to supply the Calatrava Pilot Travel Time ref. 7234G-001 with both a dark navy leather strap and a brown distressed one makes it go damn well with that sheepskin pilot’s jacket I’m buying. And the smallest, sharpest detail? A bright pop of orange on the first day of the month.

At just above €42,000, this is an investment, but not overly expensive compared to gray-market and auction prices for the Nautilus, is it?  Plus, if you can’t wait, this is available BELOW RETAIL (!) on Chrono24. If you don’t believe me, check for yourself here, and don’t forget to let me know your thoughts in the comments.