Every now and then we organize a Speedmaster GTG (Get-Together) for enthusiasts, connoisseurs and collectors of Speedies. About two weeks ago, Fratello Watches – together with Bexsonn from London – organized a little Speedmaster GTG. About 25 people were invited and showed up at this nice pub near Baker Street in London.

Instead of showing you another Speedmaster on Speedy Tuesday we thought it would be nice to give you a little report on the Speedmaster GTG of November 7th in London.

In the same weekend as the SalonQP 2014 (about which we reported here) we – together with Christopher Beccan of Bexsonn – decided to host a nice GTG for the people who have some (or a lot of) love for the Omega Speedmaster watch. We guessed that there probably would be some people already there for the SalonQP exhibition as well as some local London Speedmaster fans who were willing to join us on this occasion.

We wanted to have between 20 and 25 people to be able to keep the overview in a public place (although we did book an entire floor of the pub for ourselves). Since we are talking value here and we guessed people would bring some of their precious pieces, we didn’t want to be too ‘public’.

The oldest Speedmaster that turned up at the Speedmaster GTG was a 105.003 (there were more of them actually) and the most special piece was difficult to choose but our pick would be an actual astronaut’s watch that showed up as well. Although some people already left or did not want to put their watch on the table for security reasons, we did make the known ‘table shot’. A shot of (almost) all watches present at the Speedmaster GTG in London. 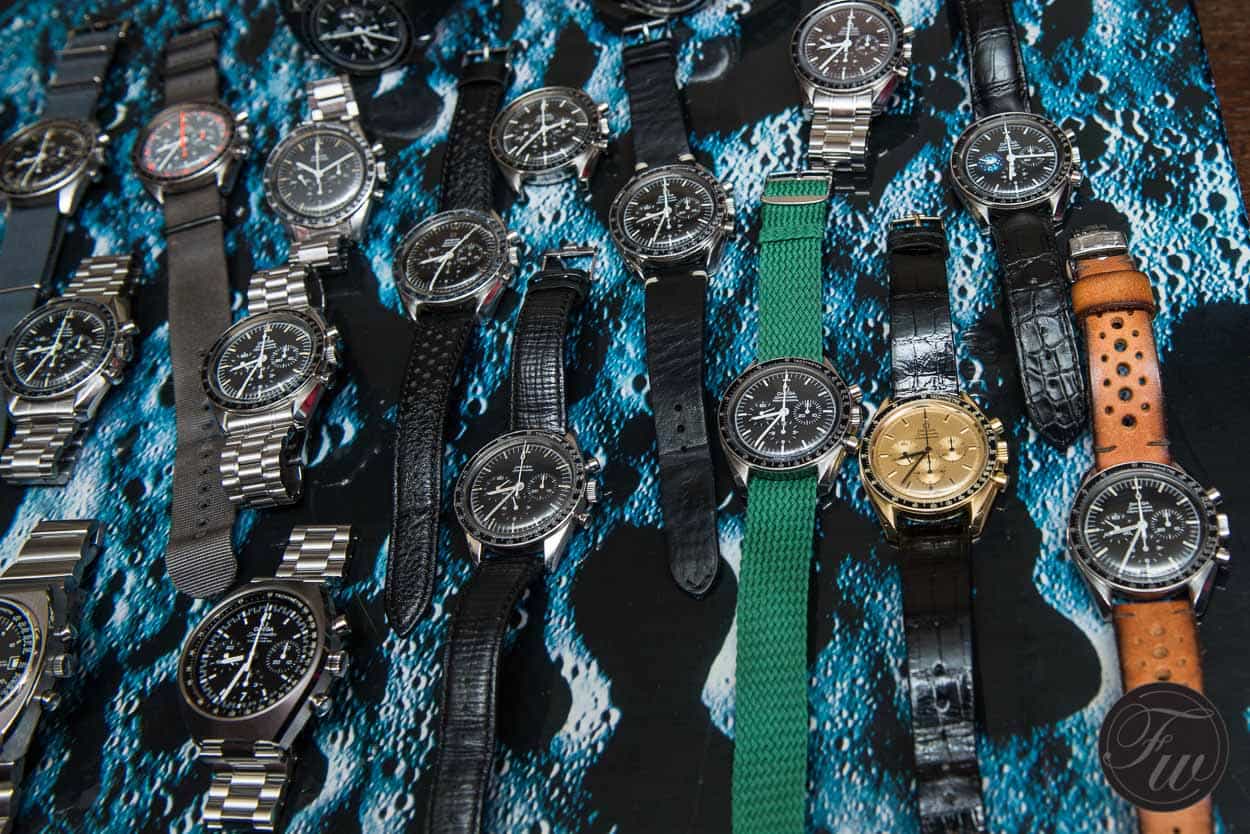 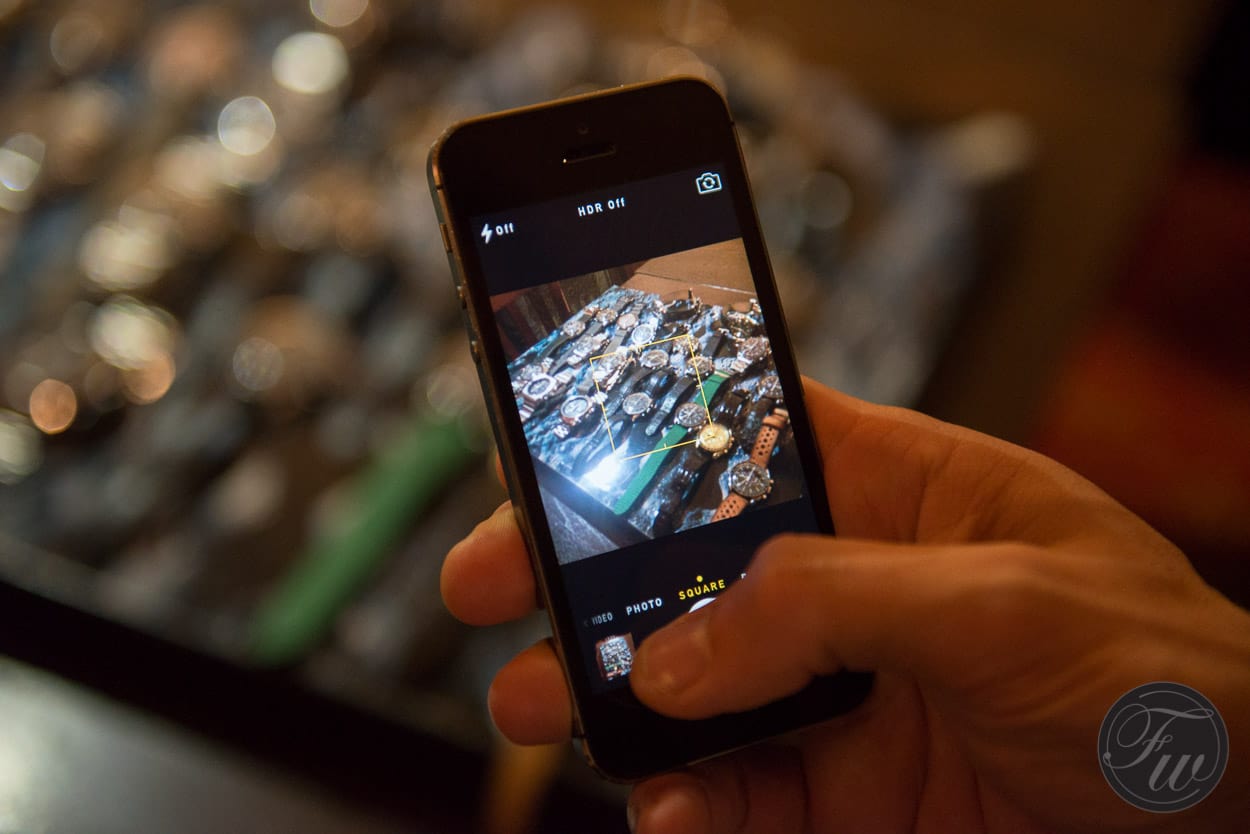 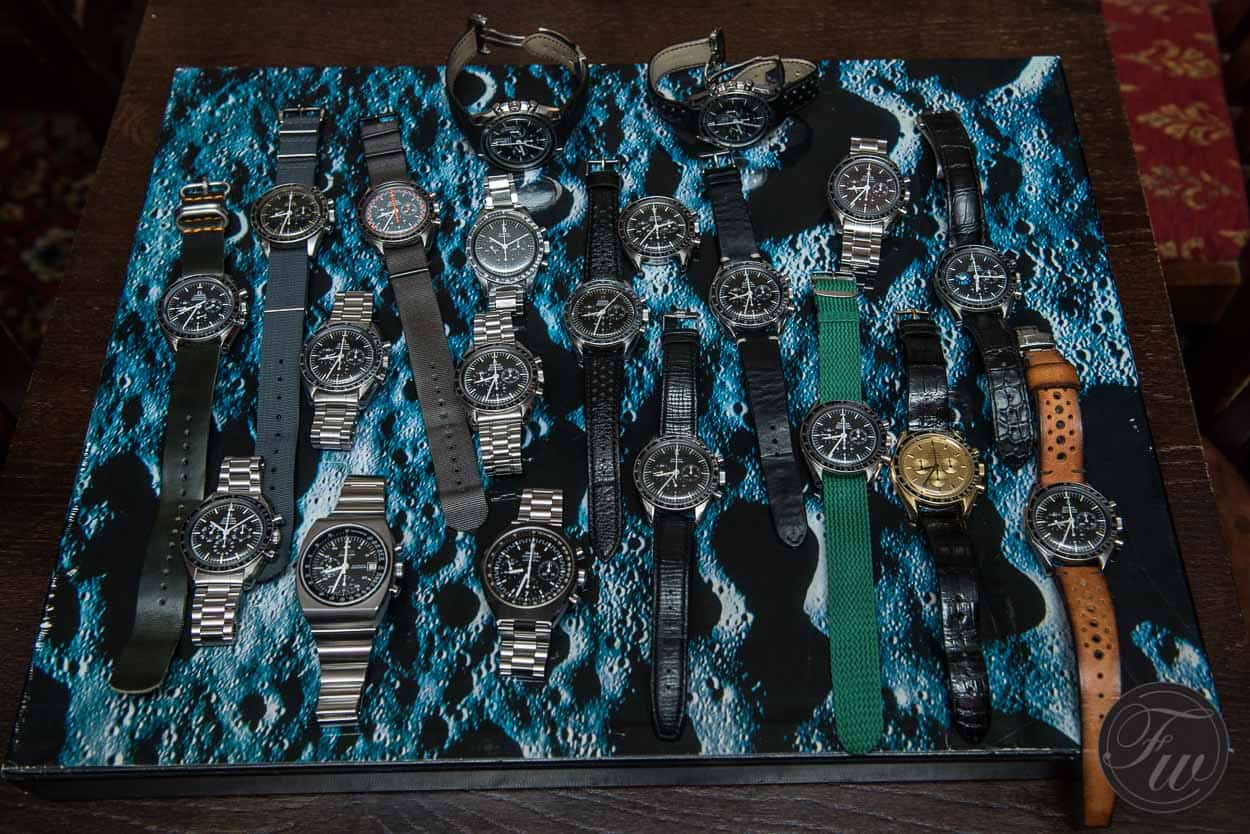 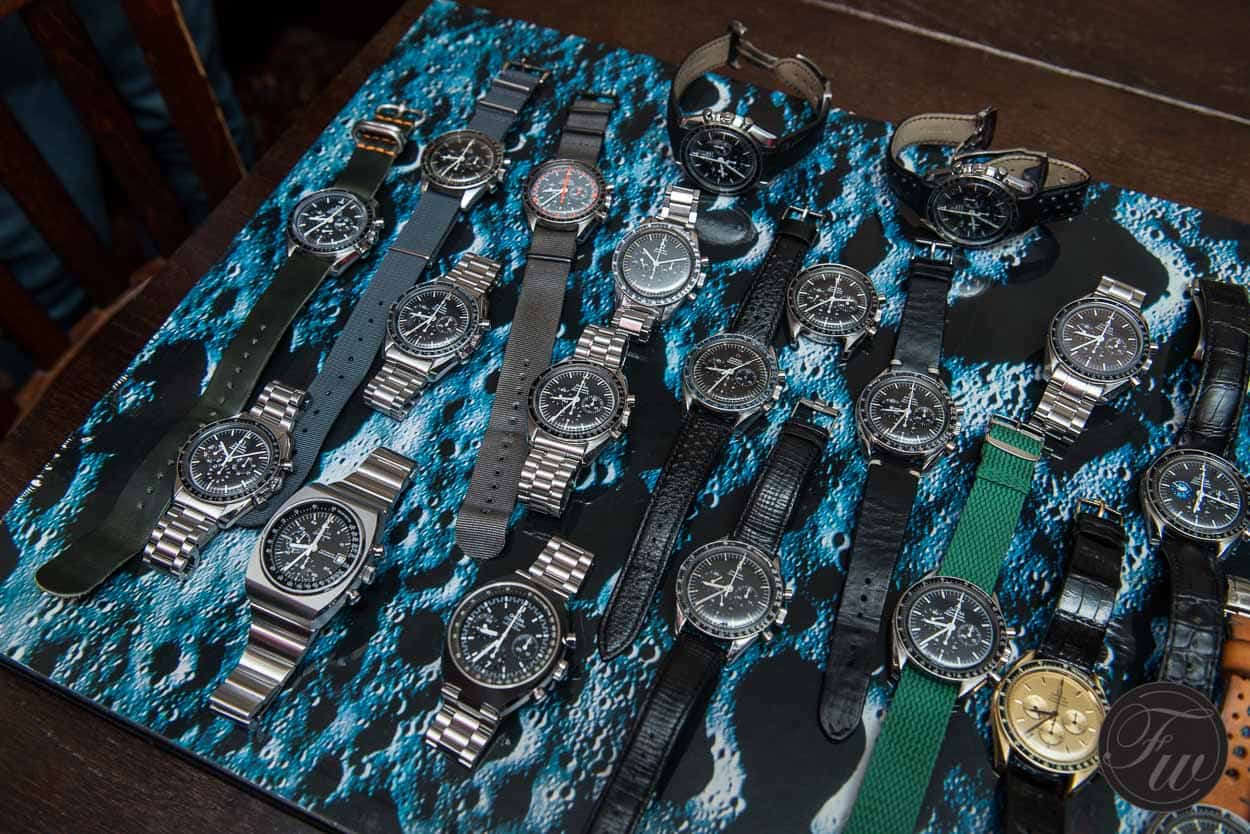 Whether you’d bring your vintage Speedmaster 105.003, Speedmaster 125 or modern Speedmaster Professional 3570.50 to the Speedmaster GTG, every watch got attention and a lot of love from the guests. Also a number of guests brought their modern piece that had special meaning to them, whether it was their first real watch or a watch that marks a special occasion or purpose (looking at you Oscar!). Some in a hurry to say that their next watch would be a vintage model. One thing was clear, a Speedmaster – vintage or new – has something ‘addictive’ to it. Talking about details, differences or history without quibbling, just passion. 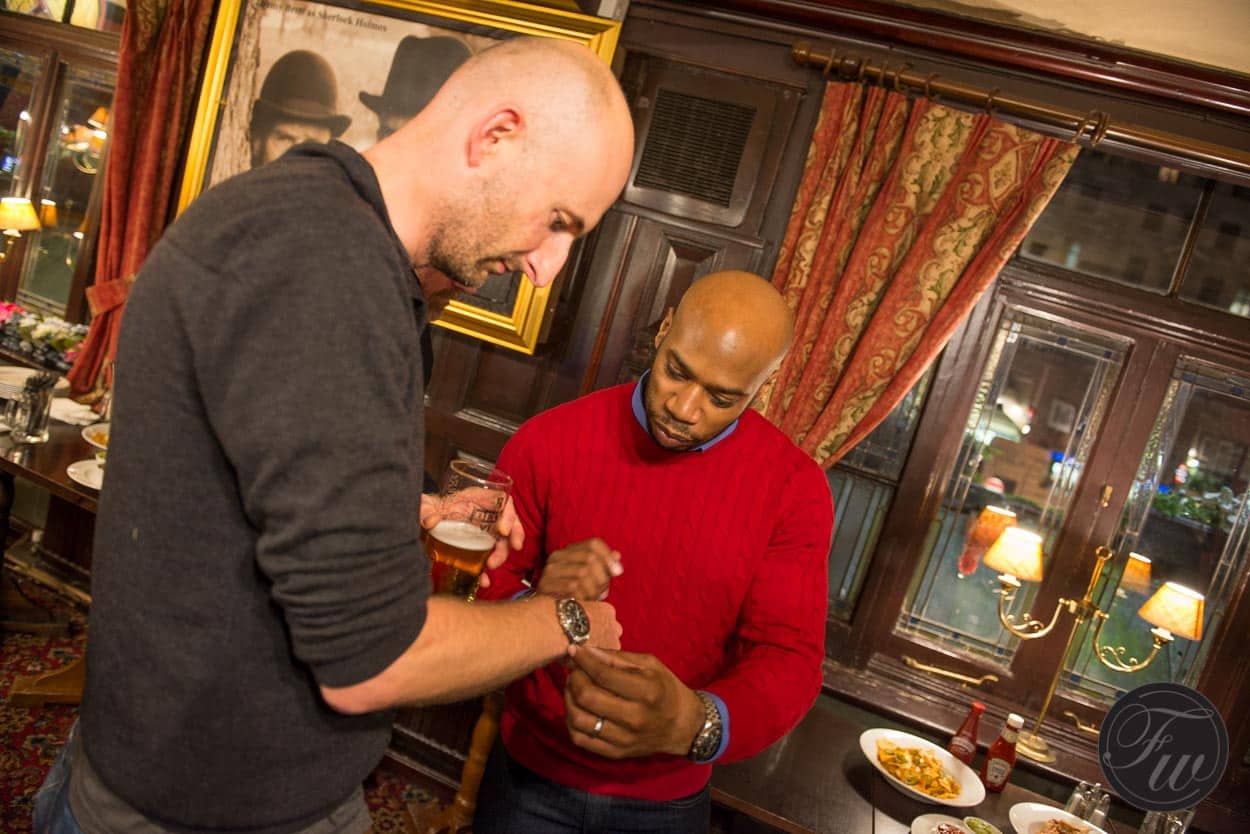 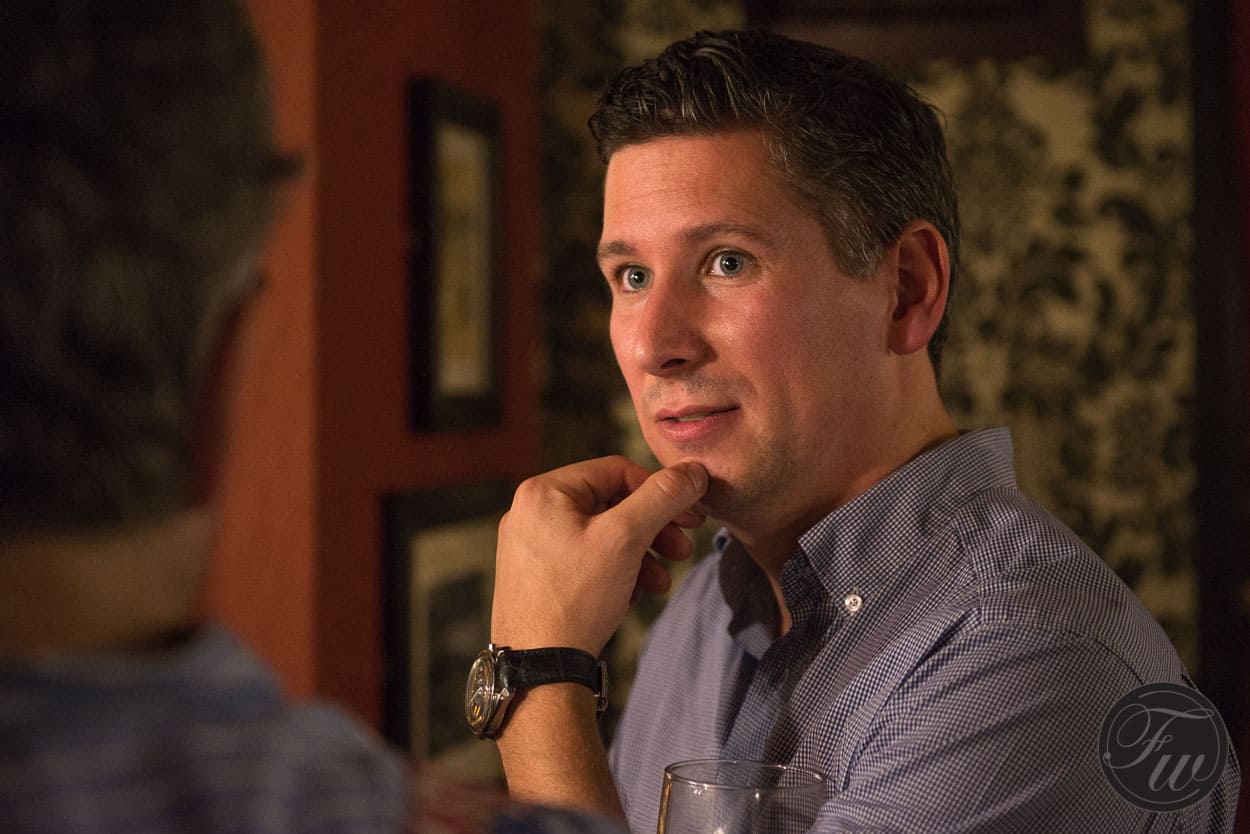 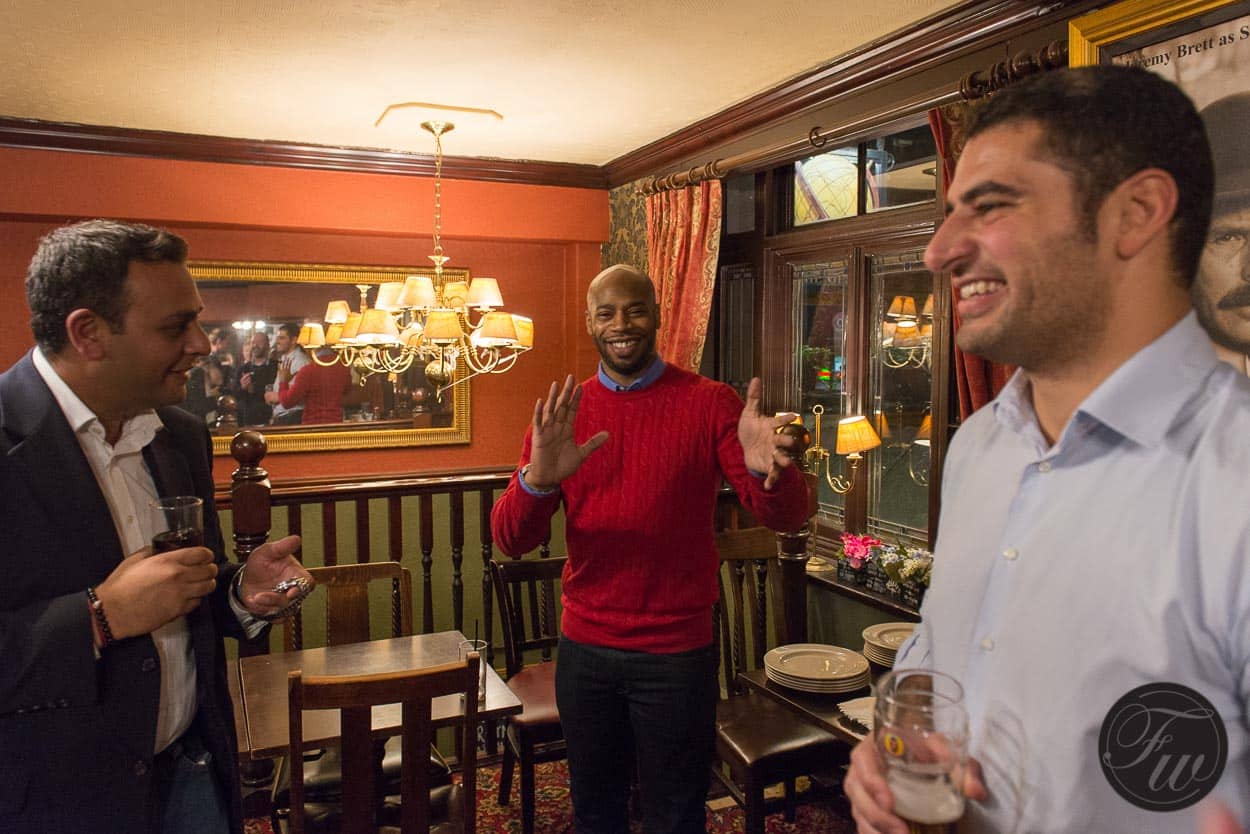 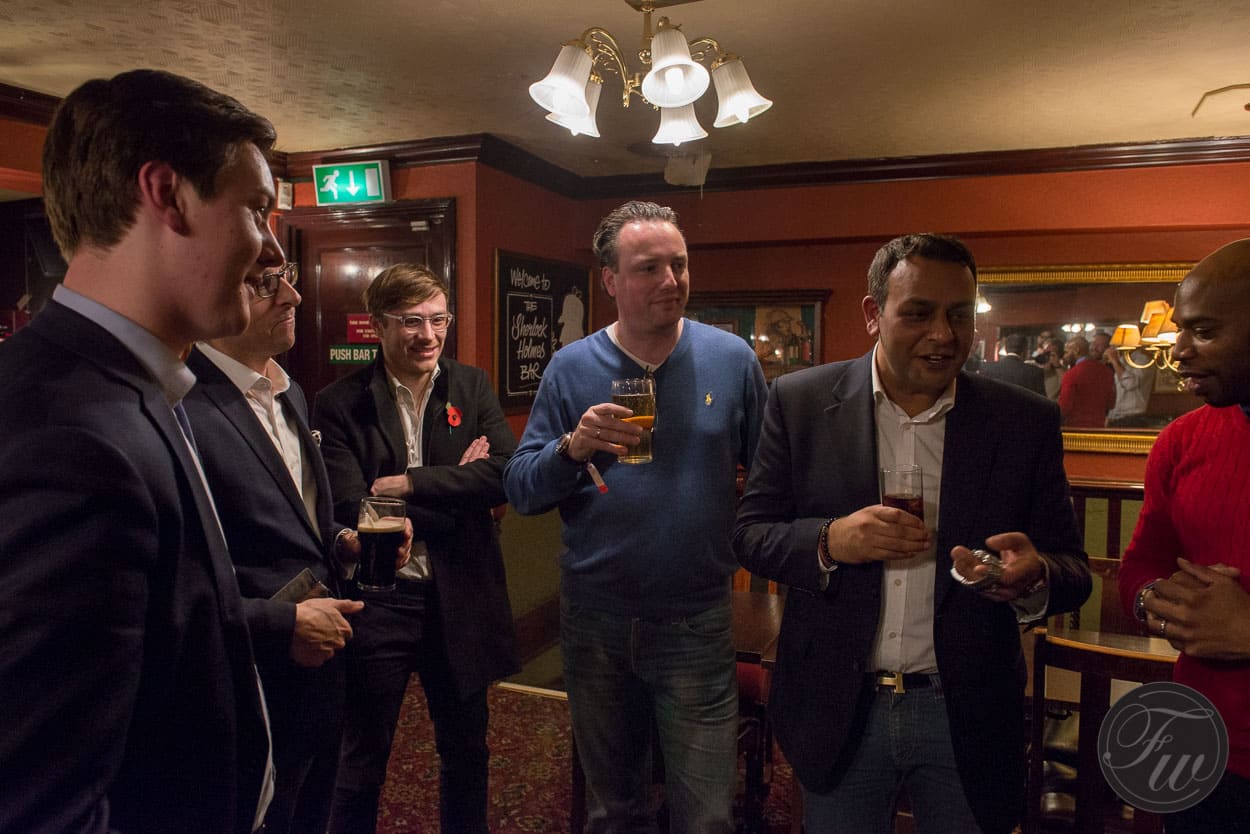 One of our personal favorites of the London Speedmaster GTG was this Speedmaster which bezel had turned blue. A very nice and distinctive color that matched the patina Speedmaster dial very well. 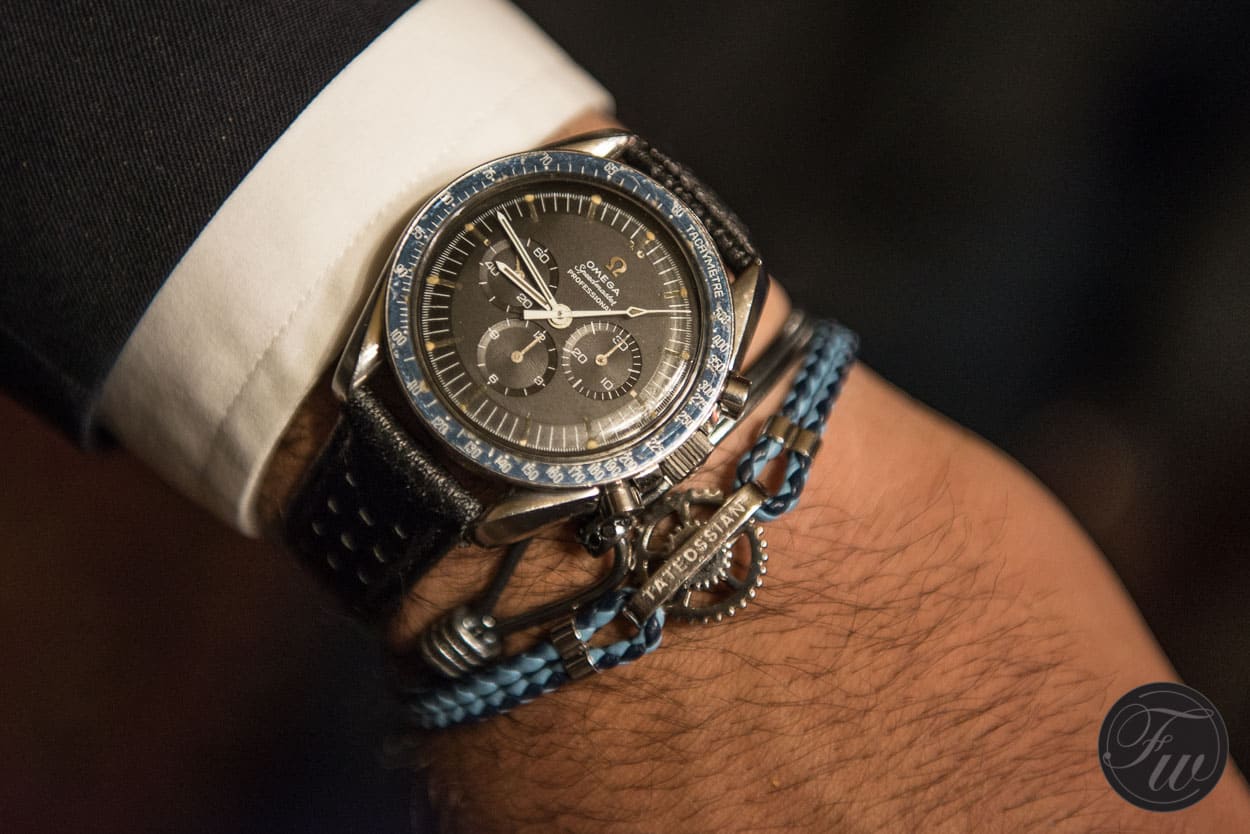 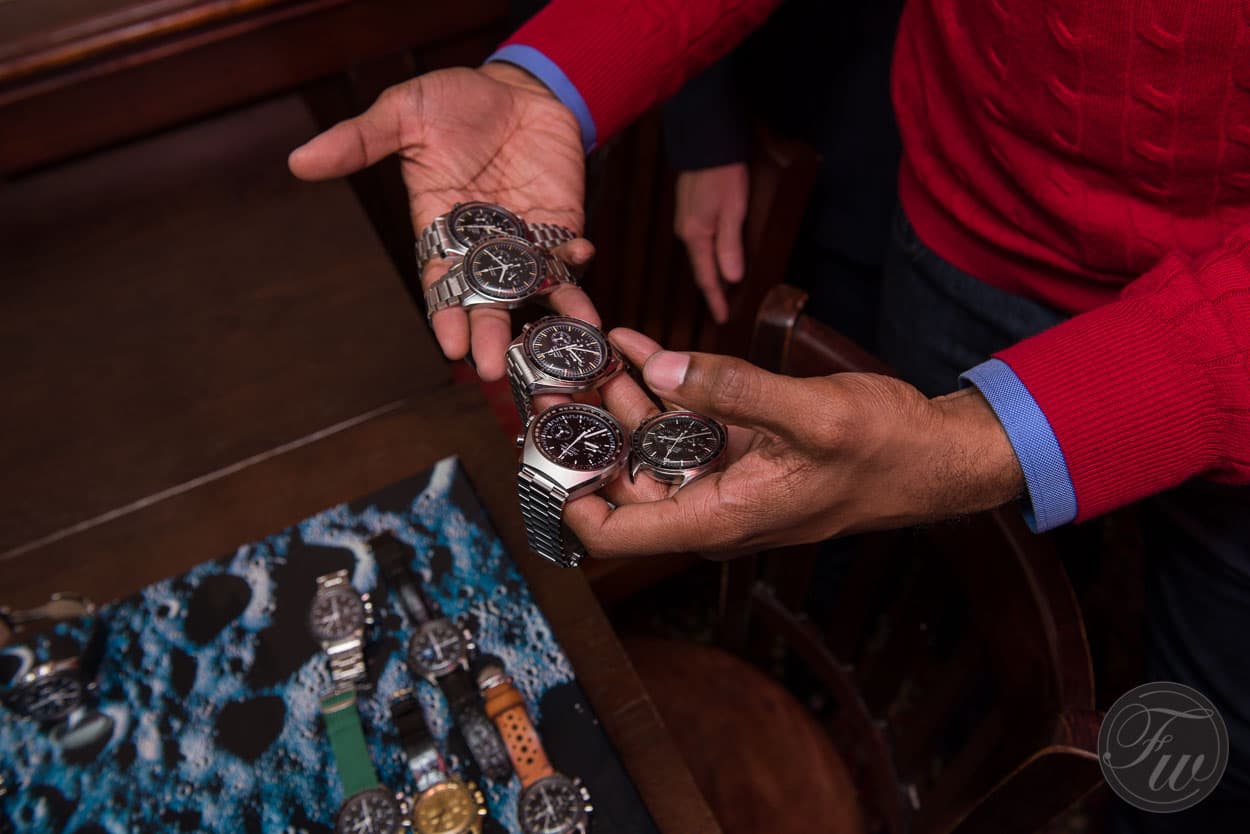 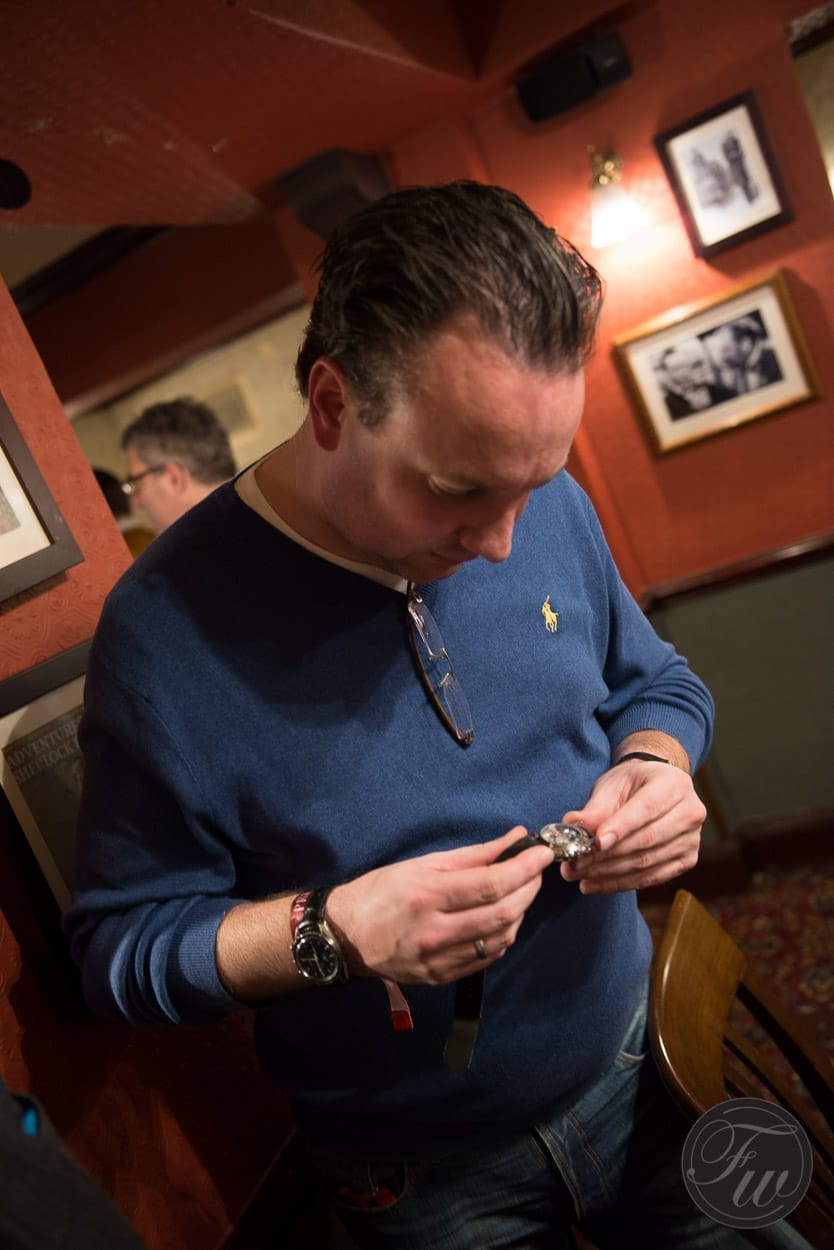 There was also this package with large size NASA photos there to be enjoyed. Later on, it did service as back ground for our table shot. On the photo the Apollo 11 crew and the space craft that brought them to the Moon (and back). 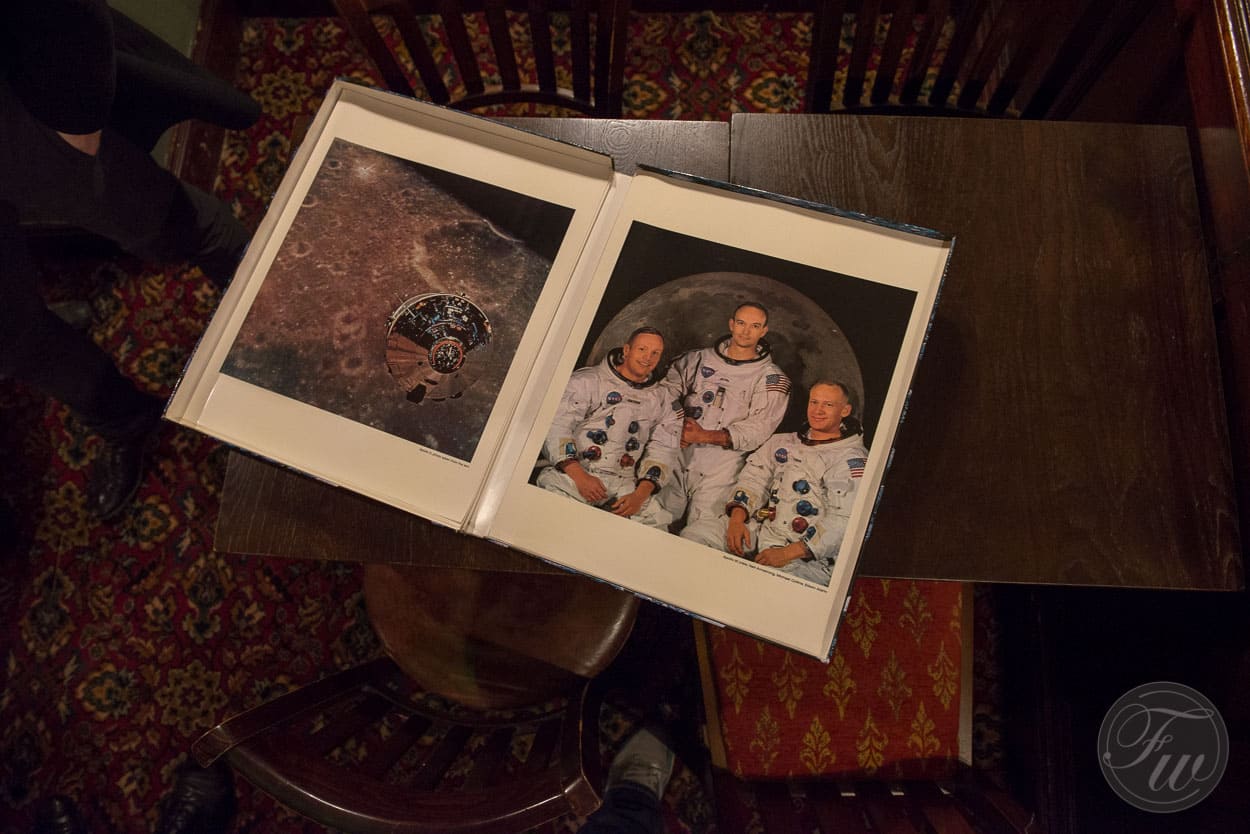 A big THANK YOU to all the people who’ve attended the Speedmaster GTG and bringing so much enthusiasm to the table. We will certainly organize other Speedmaster events in the new year again, different locations and other topics.