The article Visual Complications from the past: Cartier Pasha Day & Night explained in a nutshell how Cartier build their famous Day & Night and Mystery clocks in the thirties. Quite remarkable, since at the time the brand was a small company with just a few watchmakers on the payroll. This makes it even more special that in those years, La Maison introduced amazing visual complications like the Mystery clock and the Day & Night clock.

Freelance expertise was the key word for the production of these pieces and it must have been an honor for these watchmakers to be able to work with a brand like Cartier. Since roughly ten years the production process has changed completely. Cartier, the most important jeweler/watchmaker, made enough profit over the years to build an amazing Manufacture in La Chaux-de-Fonds, Switzerland. A 3000 square meters glass house where almost all disciplines are located under one roof. Our visit report to the manufacture can be found here.

Since 2008 Cartier shows the world (again) that it is taking the technical side of watchmaking very seriously. Where in the 1990’s the Pasha and Diabolo models with tourbillon equipped with a Gérald Genta or Girard-Perregaux caliber; the new Santos 100, Tank Americain and Ballon Bleu models of 2008 were all powered with a Flying Tourbillon caliber that was build completely in-house. More complications like a Rotonde de Cartier Minute Repeater followed and even a Mystery Flying Tourbillon caliber.

So in a respectively short period, Cartier’s own staff proved that building the two most beloved complications, the tourbillon and the minute repeater, has become daily practice. Since then we have seen various models and variations.
But it were mainly the visual complications for which Cartier was so well known for in the 1902’s. This is exactly where Cartier’s strength lies, and it is getting time now for La Maison to get back to the more visual spectacles. 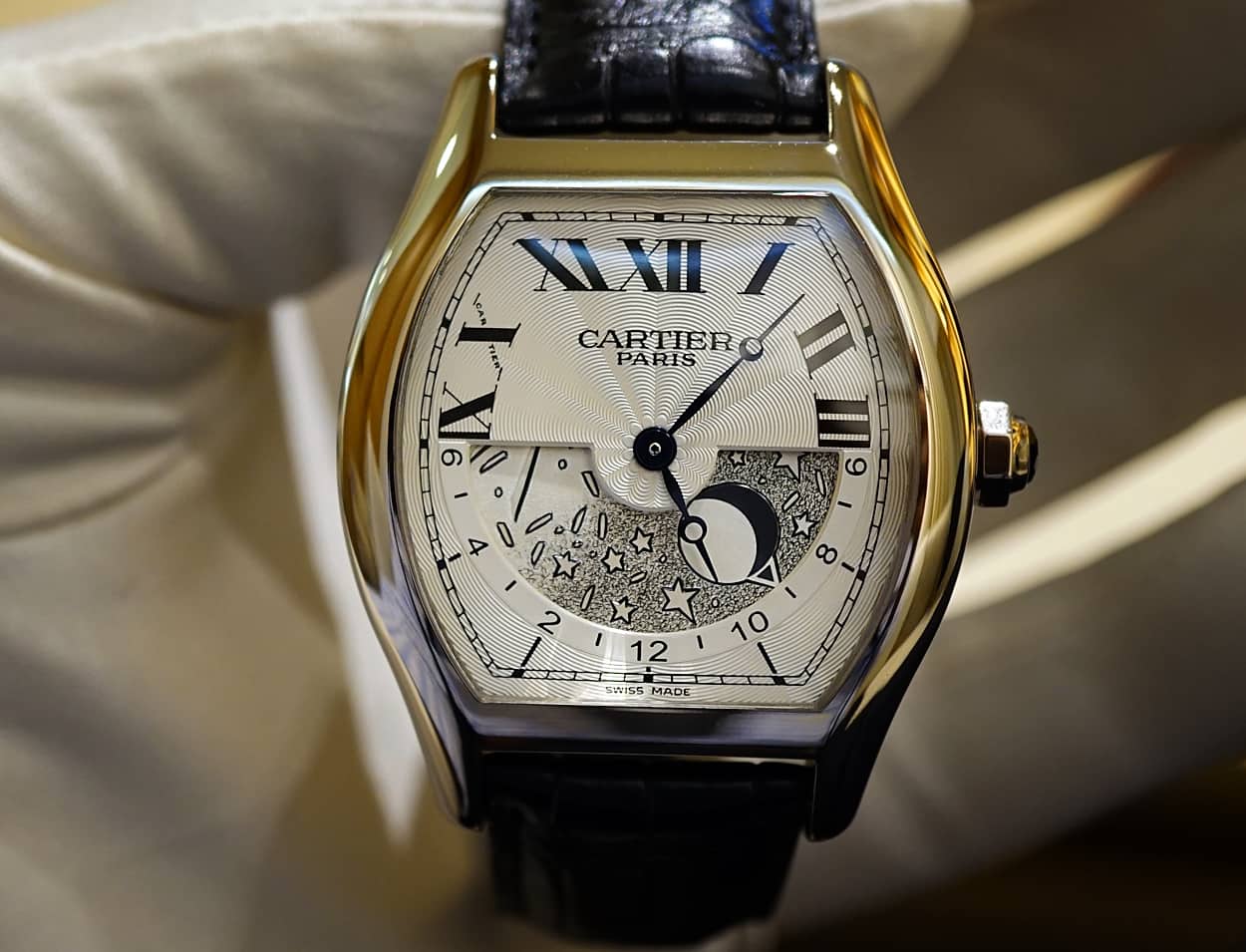 The Pasha Day & Night complication and the Tortue Day & Night from 2008 have been changed and updated with the 9912MC caliber, featuring a different way to read the time and was launched in a Rotonde de Cartier case. In the picture underneath, Carole Forestier-Kasapi (Director of Movement Creation since 2005) explains the new movement to the press. 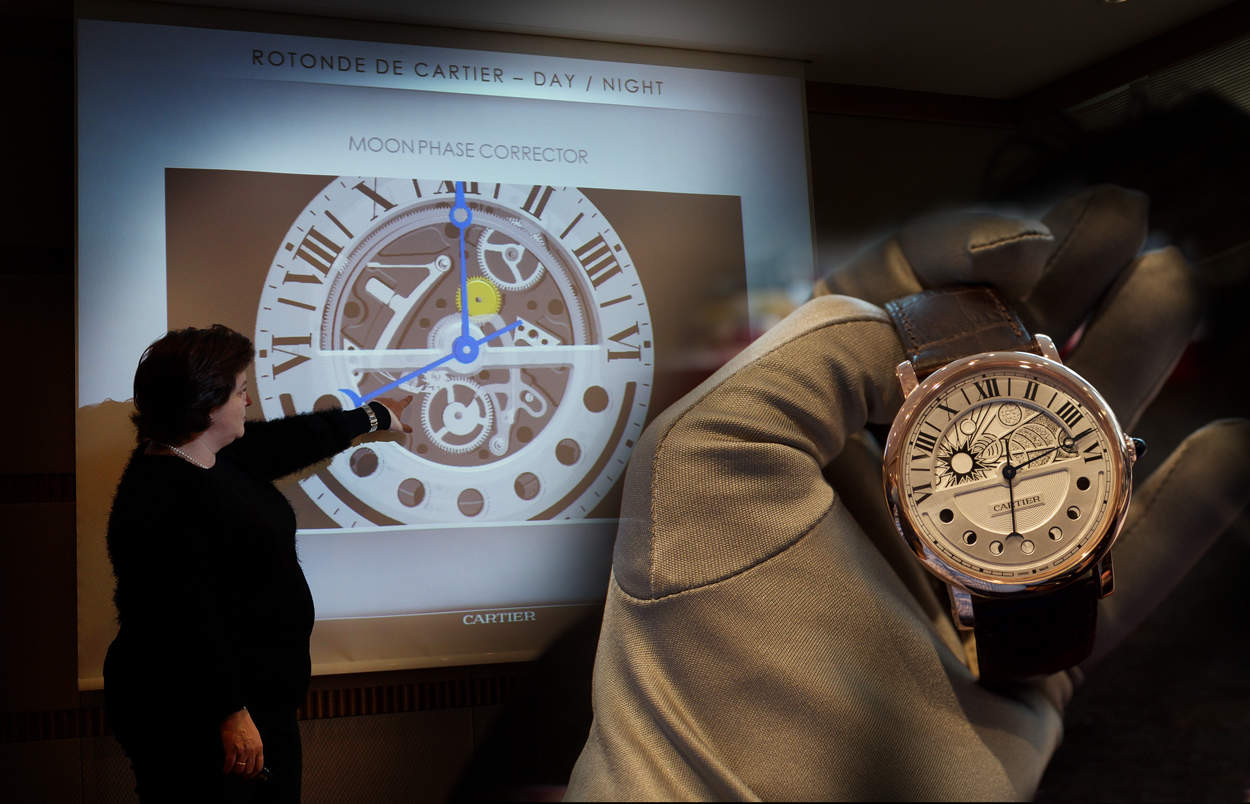 The famous mystery clocks from the twenties where reduced to fit in a 42mm ‘Rotonde de Cartier’ case and even a ‘Mystery Flying tourbillon’ was presented.

Financially 2016 was not a good year for the entire watch industry, but Cartier will certainly continue to surprise us with new complications. Besides their more mainstream collections.

Pre-announced for the upcoming SIHH in January 2017 is (from left to right) the ‘Rotonde de Cartier Mysterious Hour Skeleton’. Cartier created their own and quite amazing skeleton caliber around 2009 (check out my previous article about the Santos Dumont Skeleton ) and just a few years ago the Rotonde de Cartier Mysterious hours was presented. Both technical highlights, the Mysterious and Skeleton, are now combined into one new caliber. The caliber 9983MC movement and housed in the well-known 42mm Rotonde case in palladium.

The second watch in the line up is the Panthère Joueuse De Cartier. And this is a ladies watch pure sang! The Panthère is an often returning theme in the collection and the model, as a time only watch in the eighties, was an amazing success. Since that basic Panthère model was retired, Cartier only created high tech Panthère jewelry watches and the new Panthère Joueuse De Cartier is an excellent example of Fine Watch Making and High Jewellery . The face of the watch is all taken by the large Panther head made out of  diamonds, a large diamond serves as the hour hand, while the head and paw are indicating the minutes.

The in-house calibre 9918 MC automatic movement with an 48-hours power reserve is responsible for all the Panthère watches. Very playful and very feminine at the same time. Besides the fact that this is an gorgeous watch for the happy few, I do hope we will see some other Panthère watches at the SIHH.

Last one is the Rotonde de Cartier Minute Repeater Mysterious Double Tourbillon, build as a limited edition of just 50 pieces. It is probably the most important model of the three pre-announced watches for 2017. What can we say about this spectacular piece? This is one of those limited editions that is probably sold out before the SIHH is over and it will be one of those watches, that will likely be most talked about. I can’t wait to listen to this open-work minute repeater. Housed in a 45mm titanium case, this watch should give a spectacular sound. To achieve improved loudness for the minute repeater, the weight of the ‘Rotonde de Cartier’ watch has been reduced to a minimum. The titanium case has even been drilled to reduce weight.

The Rotonde de Cartier watch with the new 9407 MC caliber is certified “Poinçon de Genève”, which attests to the expertise of the Cartier workshops in designing and assembling the watch. Of course, there is so much more to tell about this stunning piece, but we will do that after we’ve seen the timepiece in the flesh at the SIHH.

And don’t forget, the SIHH was always press only, but for the first time it will open the doors for the public on Friday the 20th of January.