I got to spend a pleasant hour or so with Jorn Werdelin, co-founder and owner of Linde Werdelin, on his recent trip to Kuala Lumpur. We’d met earlier (the previous interview can be found here), but today was to give us a chance to have a hands-on session with the new Oktopus II watches. 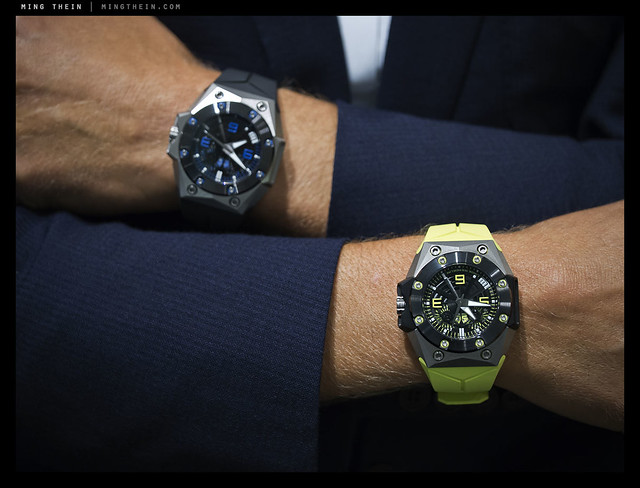 Although my FW colleagues were one of the first to photograph the watch at Basel, there have been several design changes between then and the final production versions on hand today, as briefly discussed in this article. The final version of the Oktopus II has notably larger date apertures for better visibility, and a further improved crown cutout. We’ll talk about that in a moment. 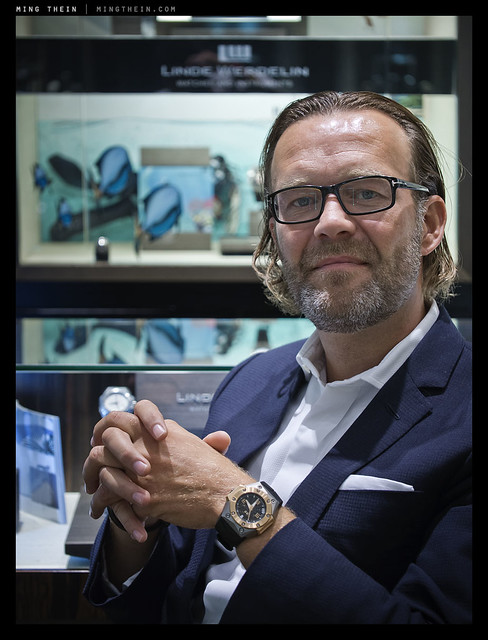 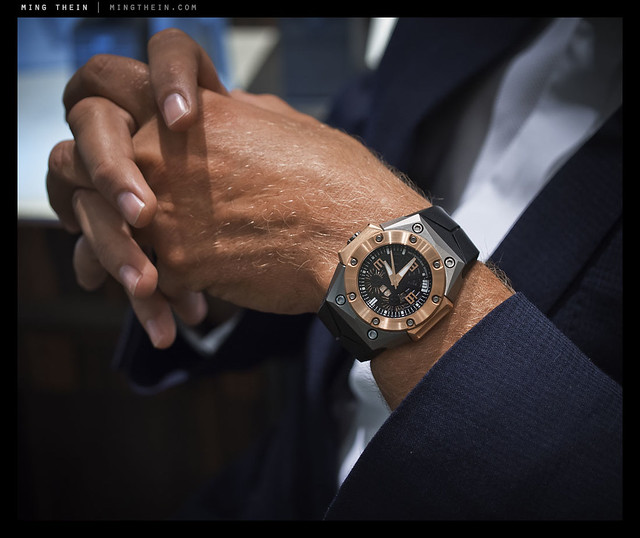 Firstly though, I was told that the Oktopus II marks a special point for the brand. Jorn says that there will not be any new cases from here on forwards; they (Jorn and partner, Morten) have now got a fairly fixed idea of what the brand should be, and in turn how translates into how the watches should look and feel physically. As far as I can tell, the watches are for adventurous types who want something different, stylish, but yet with a bit of flash and their own unique identity.

In effect, something akin to a cult iconic watch. I don’t know how many owners use the instrument modules with their watches, but it seems that it’s a practical and easy to use solution to providing the requisite specialist functions for mountaineering or diving. It’s also good to know that both instruments are interchangeably compatible with all of the cases. 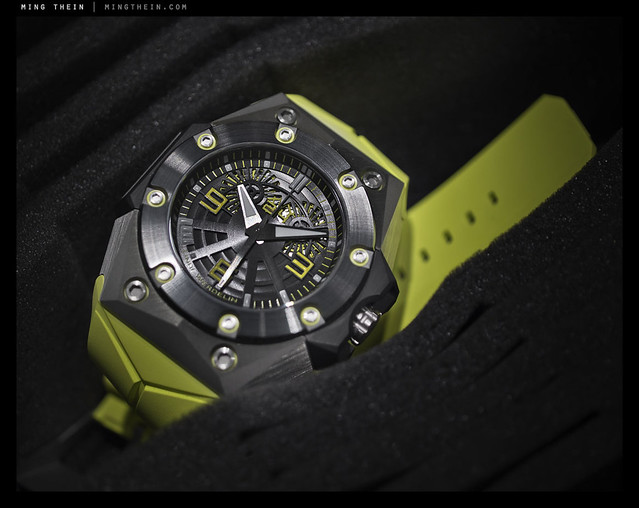 On the matter of cases, it’s the first thing you notice about a watch. The designs that have stood the test of time and can be considered ‘landmarks’ or ‘classics’ aren’t many – off the top of my head, we have the Submariner, Explorer, Daytona, Speedmaster, Nautilus, Royal Oak, Luminor…and to be honest, I can’t think of any others that come to mind off hand. There are more that are instantly identifiable to watch aficionados, of course, but the iconic ones are about the limit for most even reasonably horologically savvy people.

It’s not easy to create a distinctive case design from scratch, much less one that can be considered iconic. Linde Werdelin has done a great job with the former – all of the cases are instantly identifiable as belonging to the brand and not something else – but whether they cross the boundary into the latter is something that can only be answered with the test of time. Retained value is another good indicator of long-term survivability of a design; it’s too early to tell with Linde Werdelin as the brand is simply too new, but it’s worth noting that the iconic watches tend to realize very good resale values. 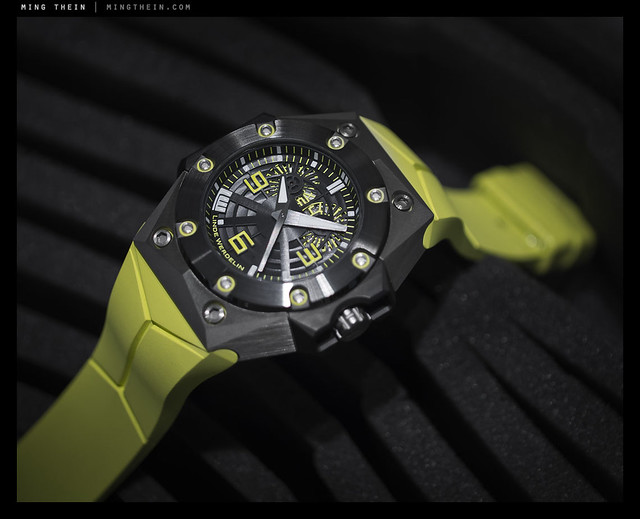 Jorn mentioned that history is not something they can sell, because it would be dishonest to claim that the brand has any; it’s of course far too new for that. So it’s the newness, the openness, and the distinctiveness that they are trying to make their hallmarks. And yes, the cases and dials are of very high quality indeed; edges are sharp and crisp without being rough, and have you seen the complexity of the Spidolite case?

I imagine the number of machining and finishing operations for that that thing must be insane. The movements may not be of the highest horological pedigree – but Jorn makes a good argument that for a tool watch of this nature, you want something reliable and serviceable, not something that might cause issues further down the line. (The Spidolites are powered by Concepto’s 7750, which are heavily reworked and improved Valjoux 7750 movements; the new Oktopus II is powerd by an ETA 2892 with a Dubois-Depraz module for the big date function.) It’s clear that he takes pride in the quality of the individual components: the reject rate for the skeleton big date wheels is apparently north of 50% due to the extremely tight clearances involved between dial and movement. Anything too thick or a fraction out of flat could cause jams. 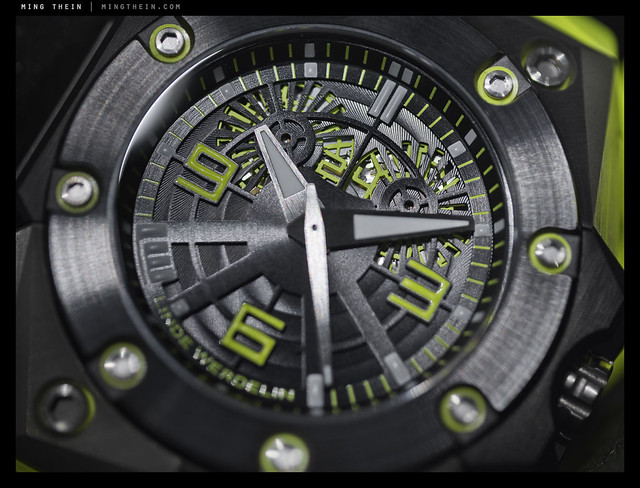 I don’t know what they did with the case design – I suspect it’s a strap that hangs in a more vertical position – but it’s wears far more comfortably than the Spidolite, especially on somebody with small wrists like myself. It’s solid, and hefty, but not heavy; the materials involved are titanium and what appears to be a zirconium-based ceramic. I’m told they were chosen especially for their corrosion resistance. It’s clear that a lot of the changes to the overall case design were evolutionary, rather than revolutionary; but some of these make a surprising amount of difference to the usability of the watch, and the overall impression given as a finished product. It’s the details that count, like the LW logo at 8 – reminiscent of a stylised Roman VIII – for instance.The biggest change is the loss of the dive bezel; it makes more sense to time things with the instrument (which you’ll be using anyway if you’re a serious diver) since you obviously can’t access the bezel with it clipped over the top anyway. 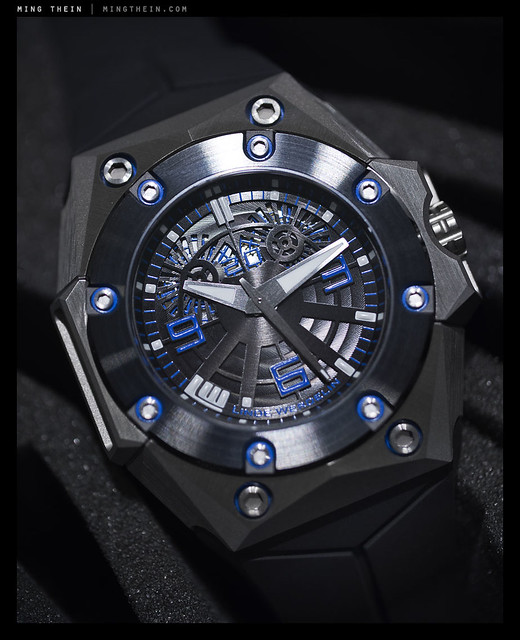 The major improvement I did notice, was the crown – unlike previous cases, it’s now very easy to operate, despite still being well protected. You’d be surprised how many manufacturers overlook this seemingly important detail with crowns that are too small, uncomfortable to use, stiff to wind etc. – the list goes on. It’s unforgivable when that is often the wearer’s only point of interaction with the watch. The fluro yellow dial is definitely the more striking of the two, and the more easily readable; however, under the right light, the blue has its own charm and is certainly more understated. I can’t help wishing for a lighter shade of blue to help legibility under all conditions, though. 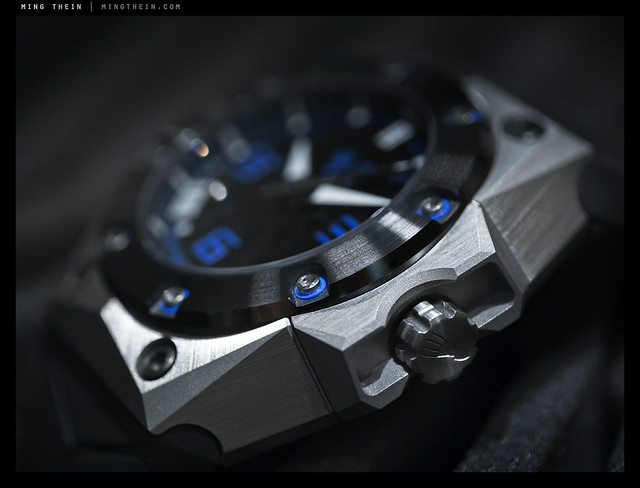 One other point of note is a rather clever adjustable length rubber strap: rather than creating different lengths for different wrists, they’ve added a section into the buckle end which can be cut off and trimmed to size; about an inch can be removed in several increments. It’s a neat design to cater for different customers, and also keeping the buckle comfortably centred on the wrist. I’m told that they’ll be going to a sleeker cut-to-fit trifold deployant buckle system at some point in the future. 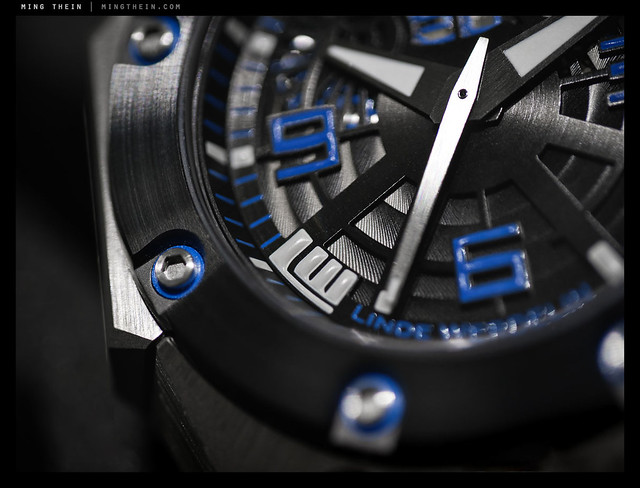 We’re at an interesting point in horology now: there’s never been so much choice. The renaissance of the mechanical watch is peaking, I think; if anything, it seems to be doing even better than when quartz wasn’t an option. Perhaps it goes hand in hand with the modern trends of conspicuous consumption, instant gratification and the paradoxically-named ‘mass luxury’; I suppose if you define luxury as something that isn’t strictly required, but is desired, then the masses have more disposable income than ever. (How much of this is on credit is very much another topic for another day.)

What this means for watch buyers is that there’s some elasticity of price points: the high end have gotten even higher; the traditional midrange (Omega, Rolex) have moved steadily upwards in both price (and volumes, interestingly) and are offering both conventional mass-market movements, as well as pushing boundaries of both price and functionality (the Omega Cal. 9300 in the new Speedmaster and Planet Ocean is a good example of this). At the low end, there are new brands moving in to fill the mass market gap.

The movement at the mid and high ends has done something interesting for the proliferation of independent brands: there’s now far more choice for somebody wanting something different from the mainstream, but not willing or able to pay the asking fee for entry into the super high end club of Dufour, Voutilainen, Urwerk et al. These makers may or may not be built around the movement (Speake-Marin) but carry distinctive, well-executed design (Sarpaneva, Linde Werdelin) and sometimes unique minor complications (Martin Braun). Linde Werdelin bridges the gap between design piece and tool watch; I can’t think of any other brand that falls into this niche.

The bottom line is that it’s an interesting time to be a collector – we’ve now got more choice than ever, especially for those wanting different yet instantly recognisable. MT

A big thank you to The Hour Glass in Kuala Lumpur for arranging the interview, as well as to Jorn Werdelin for making time for us!

Images shot on-location with available light and an Olympus OM-D with Panasonic-Leica 45/2.8 macro. I’d love to get the LW watches into the studio at some point – the case and dial textures are fantastic!

Ming Thein is a commercial photographer who also runs www.mingthein.com, the website for the thinking photographer. 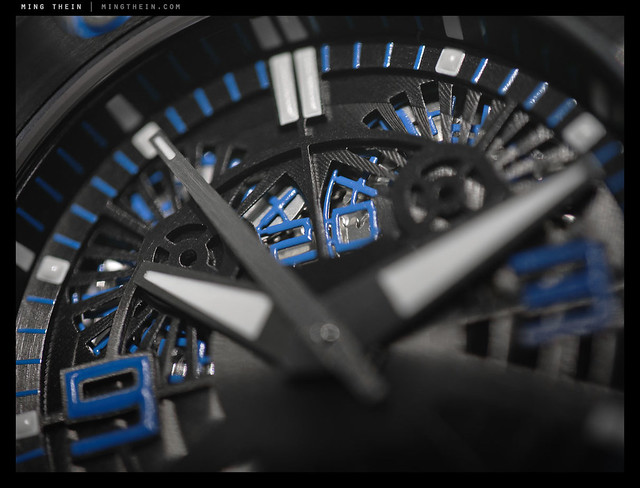