The New Omega Manufacture in Bienne – What Does That Mean?

On November 2nd, we joined the inauguration of the new Omega production facility in Bienne. The ceremony was performed by Nick Hayek (Swatch Group CEO), Raynald Aeschlimann (Omega CEO), Johann Schneider-Ammann (Head of Switzerland’s Federal Department of Economic Affairs) and the architect of the beautiful building, Shigeru Ban. Besides that, the Omega employees that work in the new manufacture also had a big role during the ceremony. A nice visual effect was created by operating the shutters and all employees waved us (press) a warm welcome.

During the ceremony, most of the talking was in French and German, but our colleagues of WatchTime published the transcript here in case you’re interested. 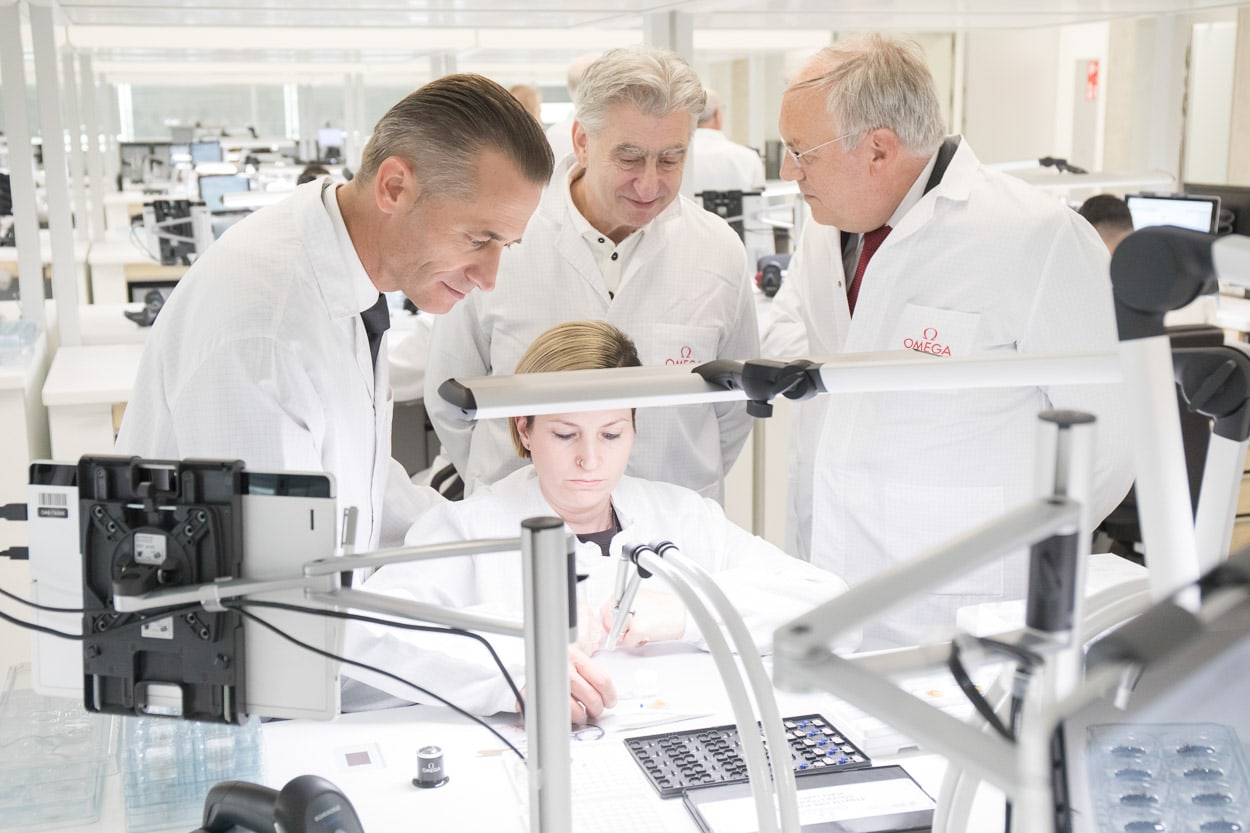 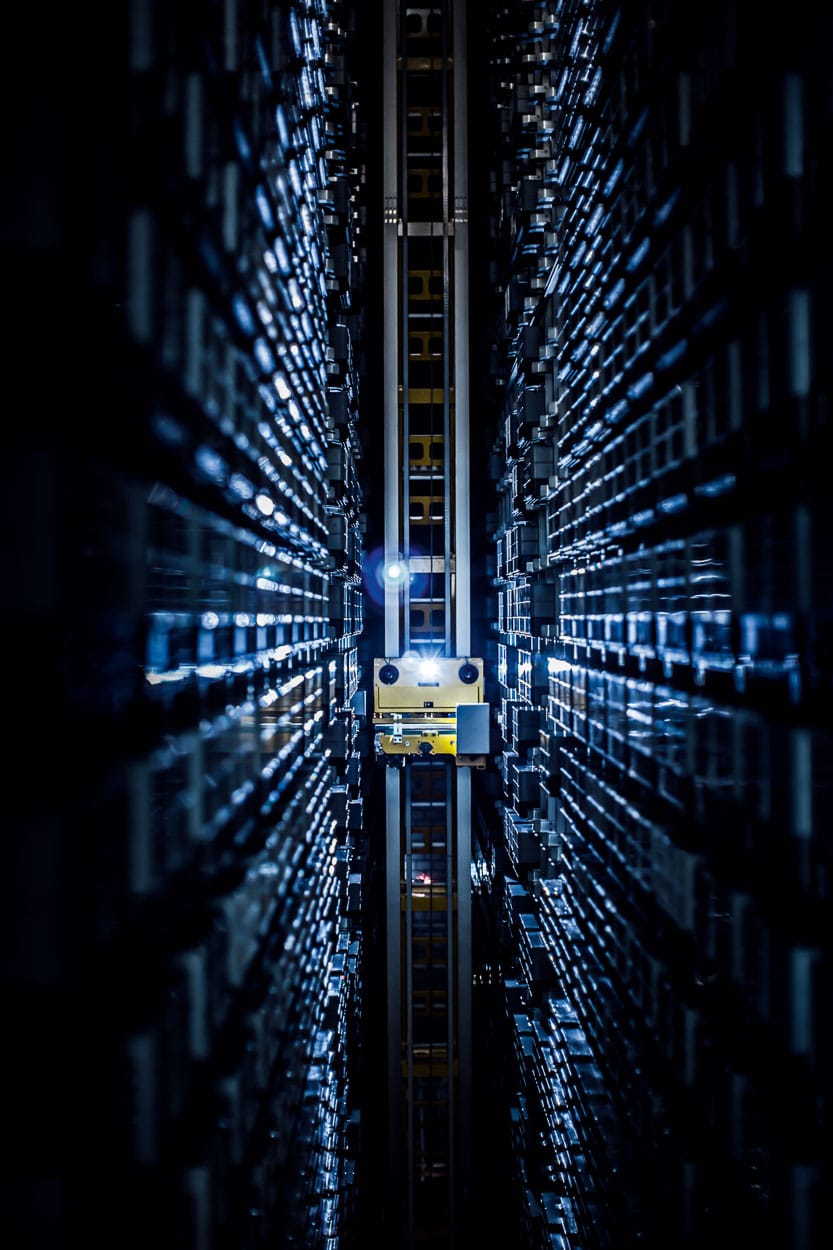 In the new manufacture, you will find the T2, T3 and T4 steps. This means T2 = assembly of the watch, T3 = adding bracelets and T4 = packaging and shipping. The new building also has stock and the logistics processes. In this building Omega also will take care of the training of their employees. We received a tour inside the new building, witnessing the new workstations, the T2/T3 and T4 steps as well as an explanation of the new and impressive fully automated storage system inside the building. This ‘jukebox’ with all the parts is about 3 floors high and contains over 30.000 boxes filled with stock (watch and bracelet parts). The robot / picker moves with an impressive speed of 4 meters per second, to pick a box and deliver it to the control room where they do the further distribution of parts. On one of the floors, there’s also an office for the METAS staff, to ensure the standards are met before receiving the ‘Master Chronometer’ certification.

During our visit, we also had a brief talk with Raynald Aeschlimann about the new Omega manufacture. We asked him whether the new Omega manufacture would also mean a higher production number. The current production of Omega is between 600.000 and 700.000 pieces per year. According to Aeschlimann “There is no increased production number, just shorter times between steps as everything is now under one roof. We moved from several different facilities to this one here in Bienne.“. We also asked him wether the new Omega manufacture in Bienne will have influence on the time to market (if you had a Speedy Tuesday watch on order, you know what we are talking about). “Yes, but we still need a certain amount of days to produce the watch, get the watch through the Master Chronometer certification. So yes, it will have an influence on the delivery of watches, but this is all rather relative.”. Having been in the new Omega manufacture, it became clear that the new production & assembly lines also mean a more efficient way of testing and assembling watches. We also noticed that during QC procedures, it will now be easier to have just one single watch going back in the production line instead of an entire batch of 10 (which used to be the case, as the trays from the production line contains 10 watch heads each). 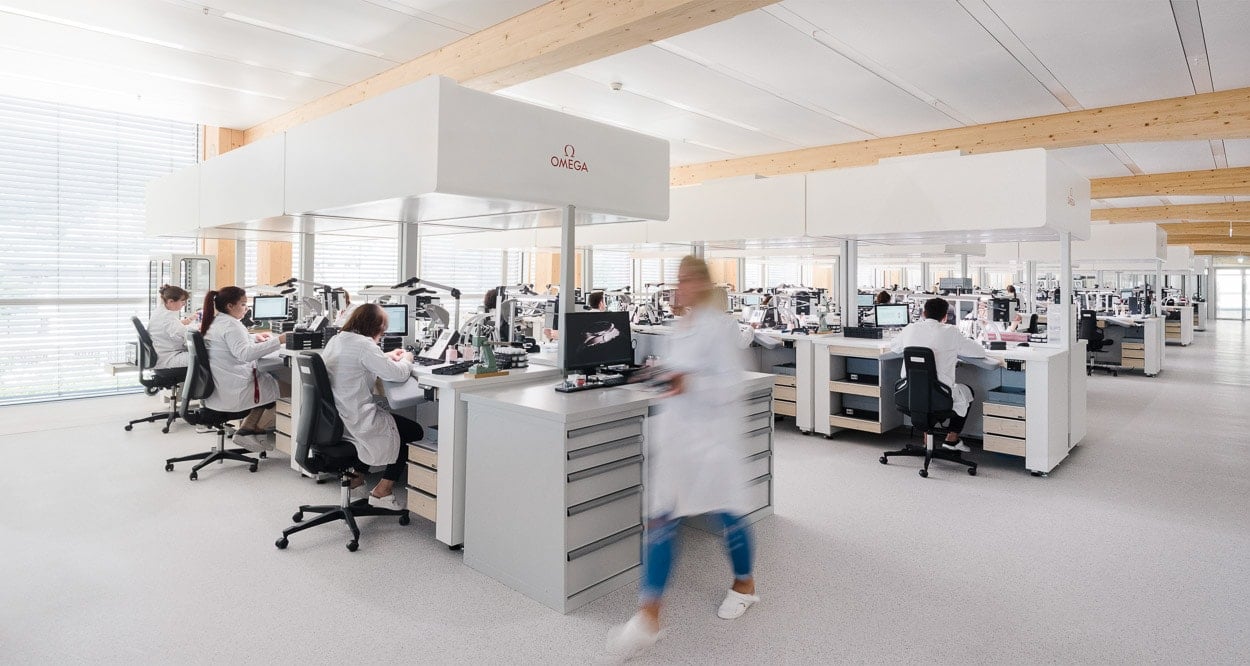 Across the street (Rue Jakob-Stämpfli in Bienne), there is the famous Omega museum. An old building that had several functions in the past, including being a day care for small children. Now, it is a museum (and the archives are here as well) and company restaurant. A new museum is on the rise, just around the corner of the main Omega buildings (the current ones that are being used for staff and management is from the 1950s, where another part is from the 1960s, these are all connected with the new Omega manufacture). This building will be revamped into the new museum. We asked Raynald Aeschlimann if that would mean there will more (vintage) watches for us to admire. “Partly. There will be more watches in the new museum, but we also want to be able to do something on the [watchmaking] education level of visitors. You will see.“. The new museum will open next year, we keep you posted.

The new Omega building is very impressive and hyper modern. The structure of the building is just as impressive as what is inside though. Architect Shigeru Ban tells us that this is one of the largest building in the world with a wooden structure. The mix of wood, concrete and glass looks amazing and the light inside the new Omega manufacture is beautiful. The Omega employees inside (who are ALL wearing Omega watches by the way) the new factory work with the latest equipment, like touch panels (iPad like) with instructions and the watchmaking & assembly tools look like a tool-rack in a modern dentist practice.

The goal of Omega is to reach the number of 500,000 Master Chronometer watches in the near future, only to expand it to an even higher number after that.